This article on Greg Trapnell's HQ Monaro was originally published in the August 2015 issue of Street Machine magazine, before Greg took on Hot Rod Drag Week in America for the first time. Currently he's competing in his second Drag Week and things are going a lot smoother! 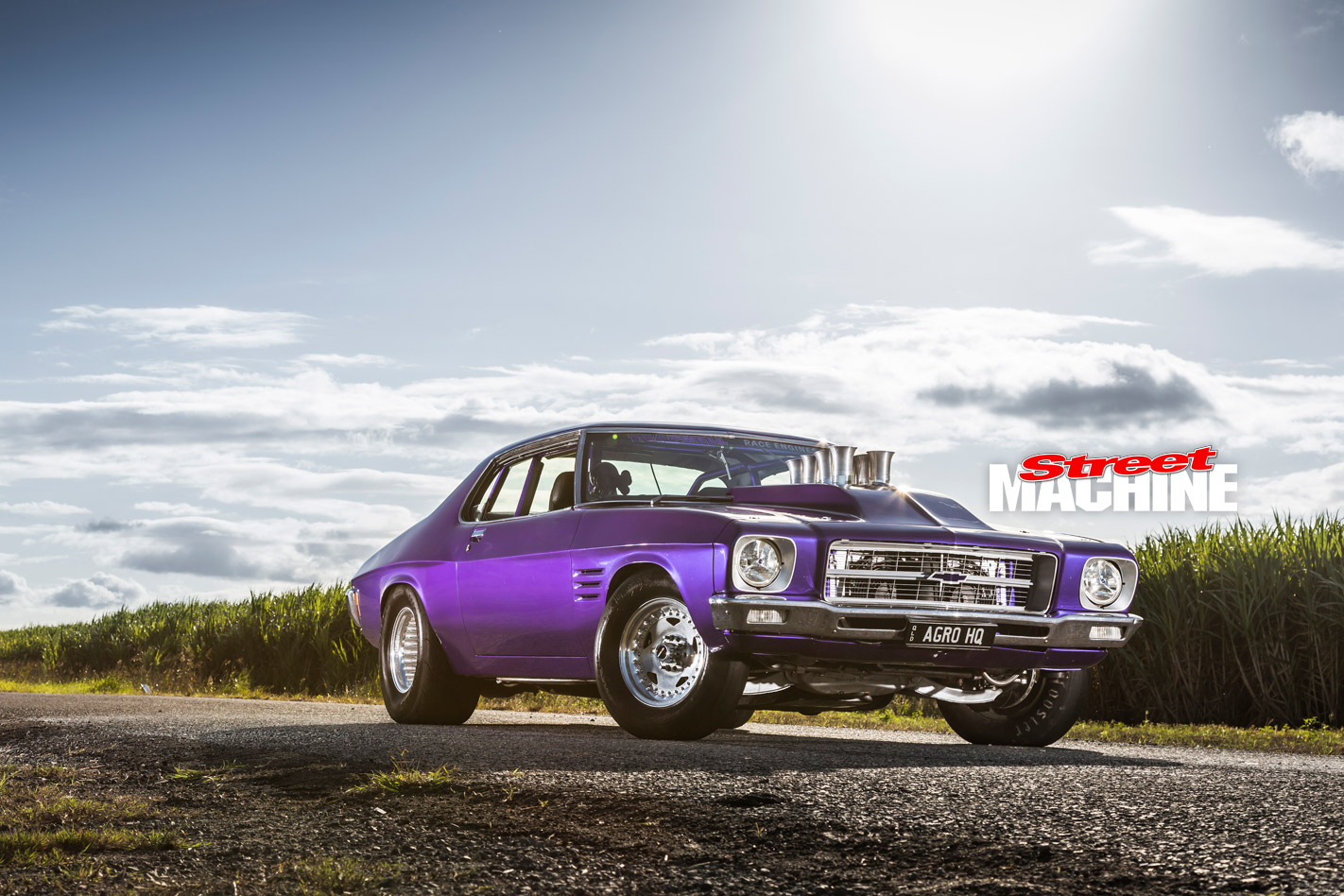 YOU’VE been living on Mars or in the Bermuda Triangle – those are the only acceptable reasons to not recognise this Monaro. It has been the subject of more memes, wild photos and video action than any other car I can think of, which comes down to two solid factors – owner Greg Trapnell’s ‘spirited’ driving style and the fact that it looks so wild, twisting and contorting like it’s feeding off all the punishment. 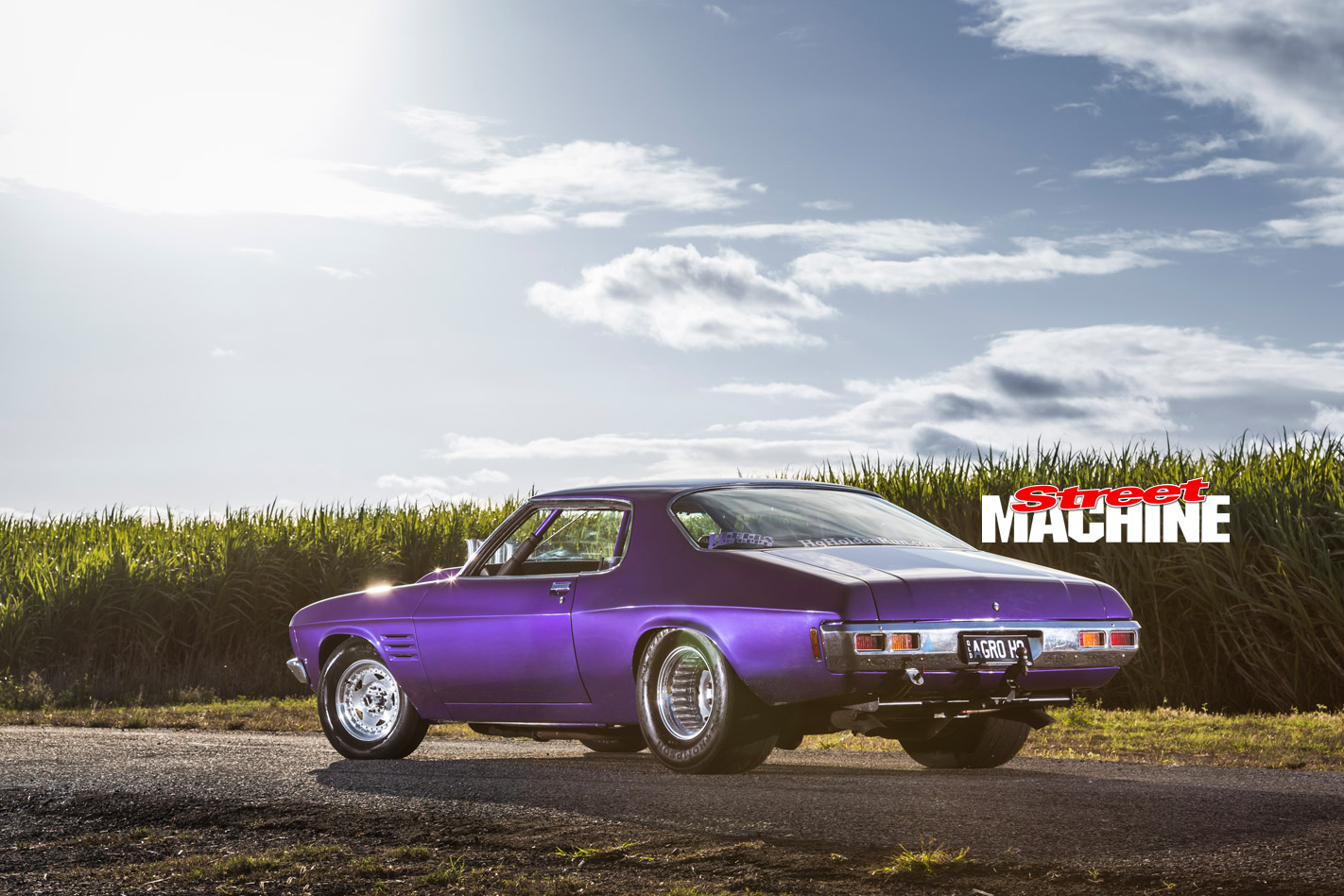 It’s sure to earn both Greg and the Monaro a solid reputation Stateside. That’s right, as you read this, the HQ is on a slow boat to the US to tackle the Yanks at Hot Rod magazine’s Drag Week. 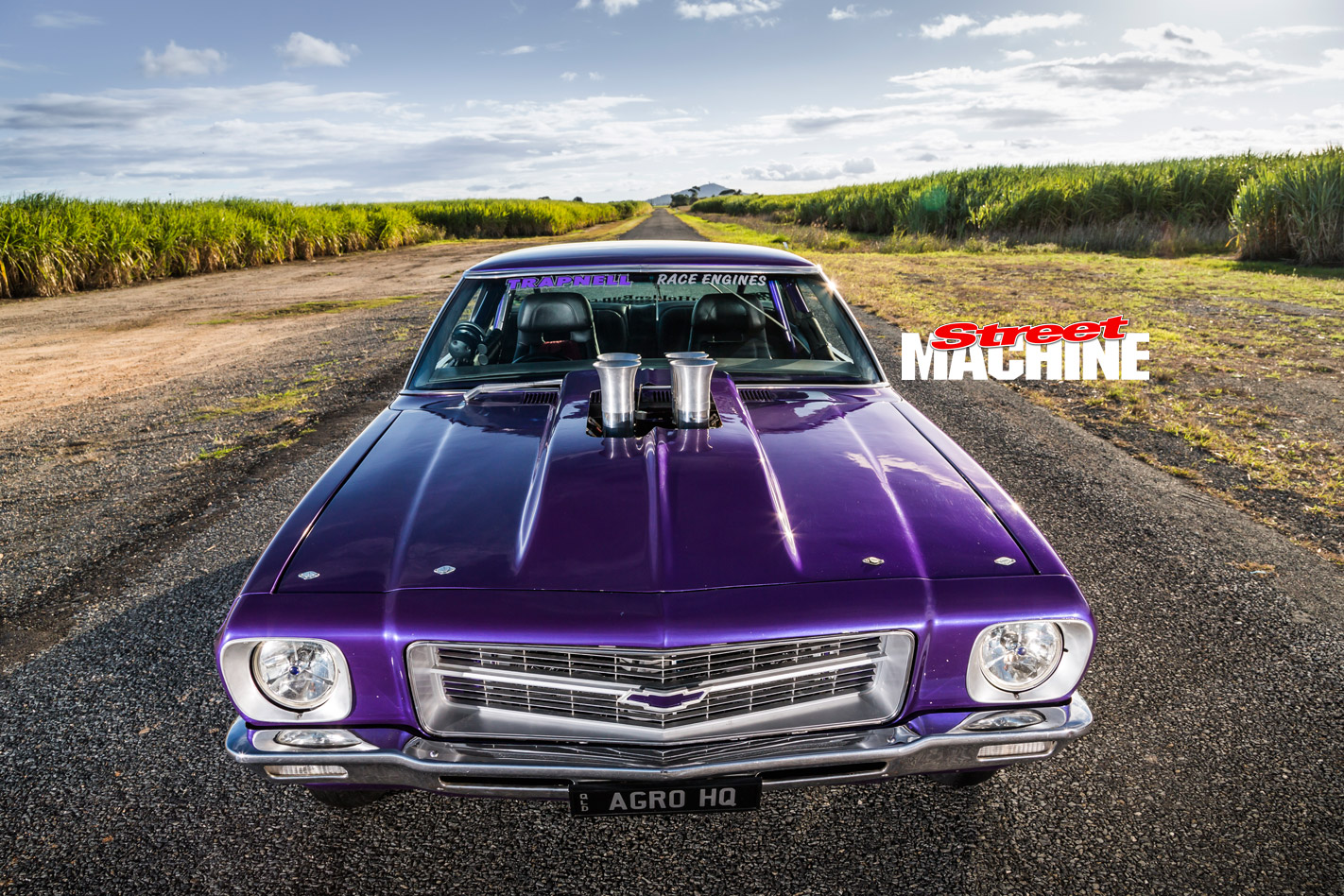 The Trapnell name is well known in hot car circles, with both Greg and brother Geoff piloting a number of tough street-and-strip cars. “I bought this HQ about 16 years ago,” Greg says. “It was a rolling shell with mini-tubs and chassis connectors. It raced at Surfers back in the day with a stout 350.” 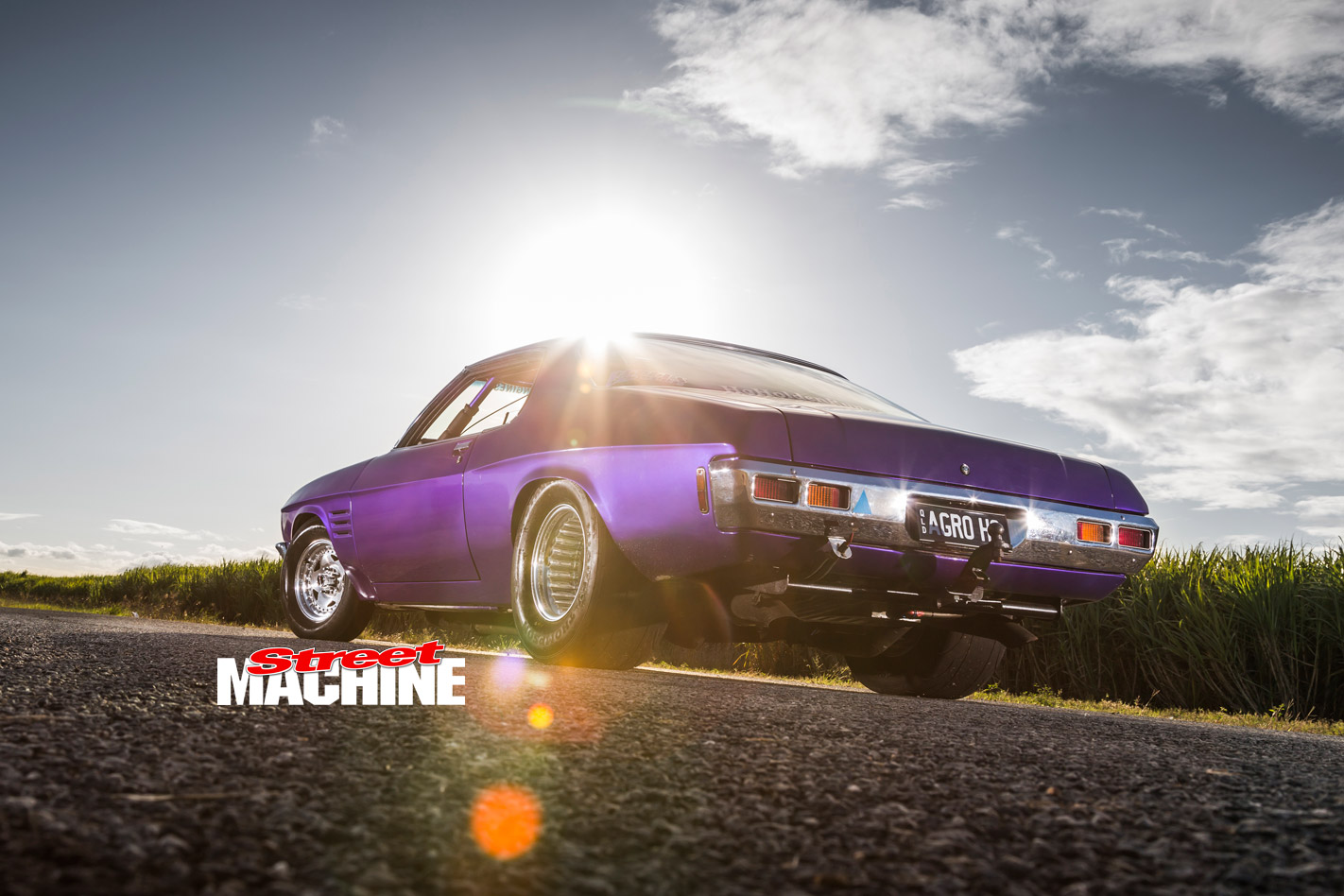 It’s a genuine GTS by the numbers, but as its cherry was long ago popped, Greg forged ahead to build the coupe he’d always wanted. A larger set of tubs were fitted along with a full ’cage, while the body received a gentle pumping of the rear arches. Queens Road Smash Repairs coated the beautiful Q curves in a custom purple hue, which 15 years on still looks the goods. A fibreglass bonnet with reverse-cowl has been the only recent change; however the scoop really doesn’t hide much and can expect nothing more than a certificate for trying. 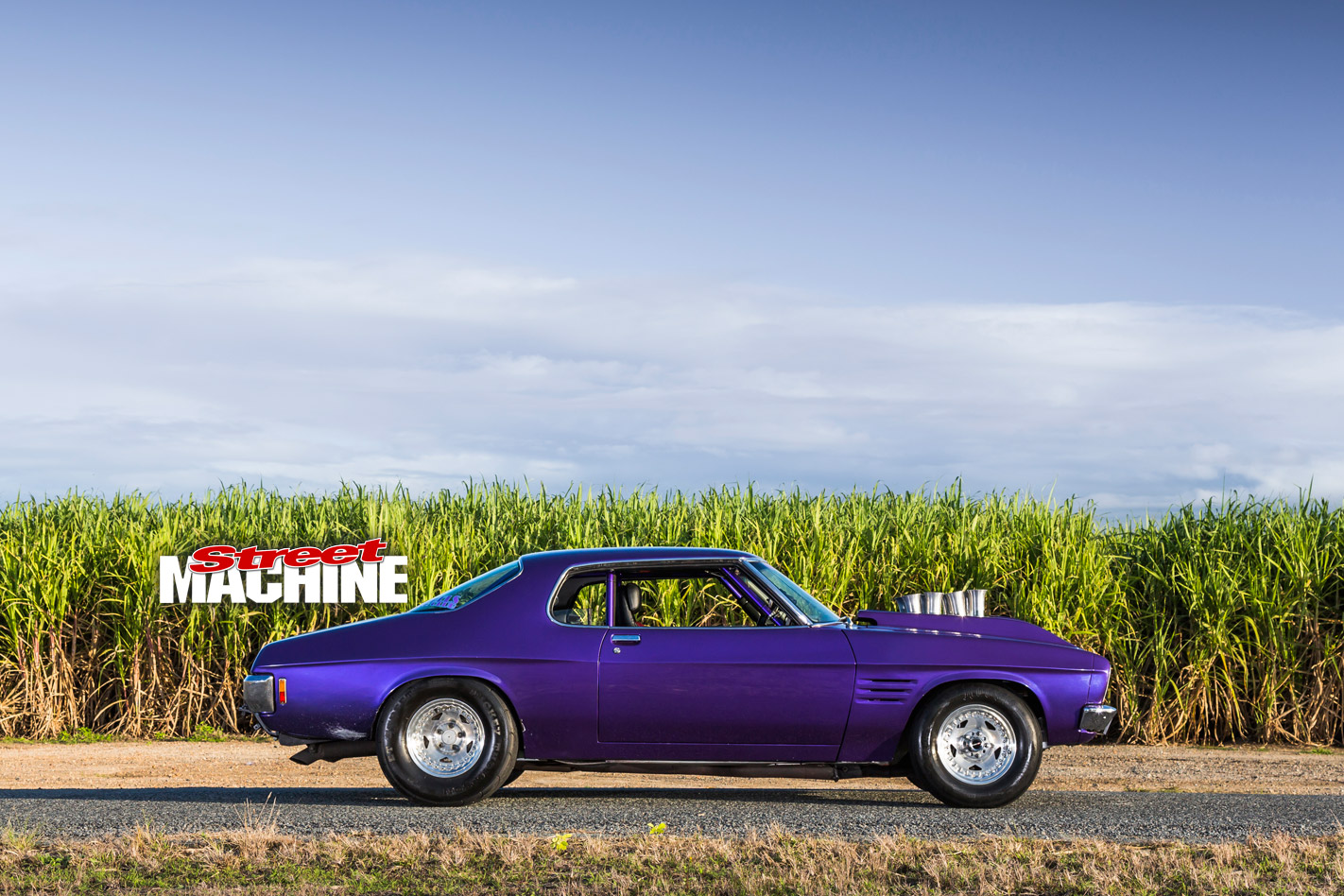 The first of many engine combos was a 402ci big-block Chev, which graduated from a single carb to duals on a sheet-metal tunnel ram, pushing the big coupe to an 11.40 best.

“We then switched to a 500-cube,” explains Geoff, owner of Trapnell Race Engines and chief spannerman on Greg’s Monaro. “We toyed with a few different intake combinations, which dropped ETs into the mid-10s – remembering this was 12-odd years ago – before going the mechanical injection route with methanol.” 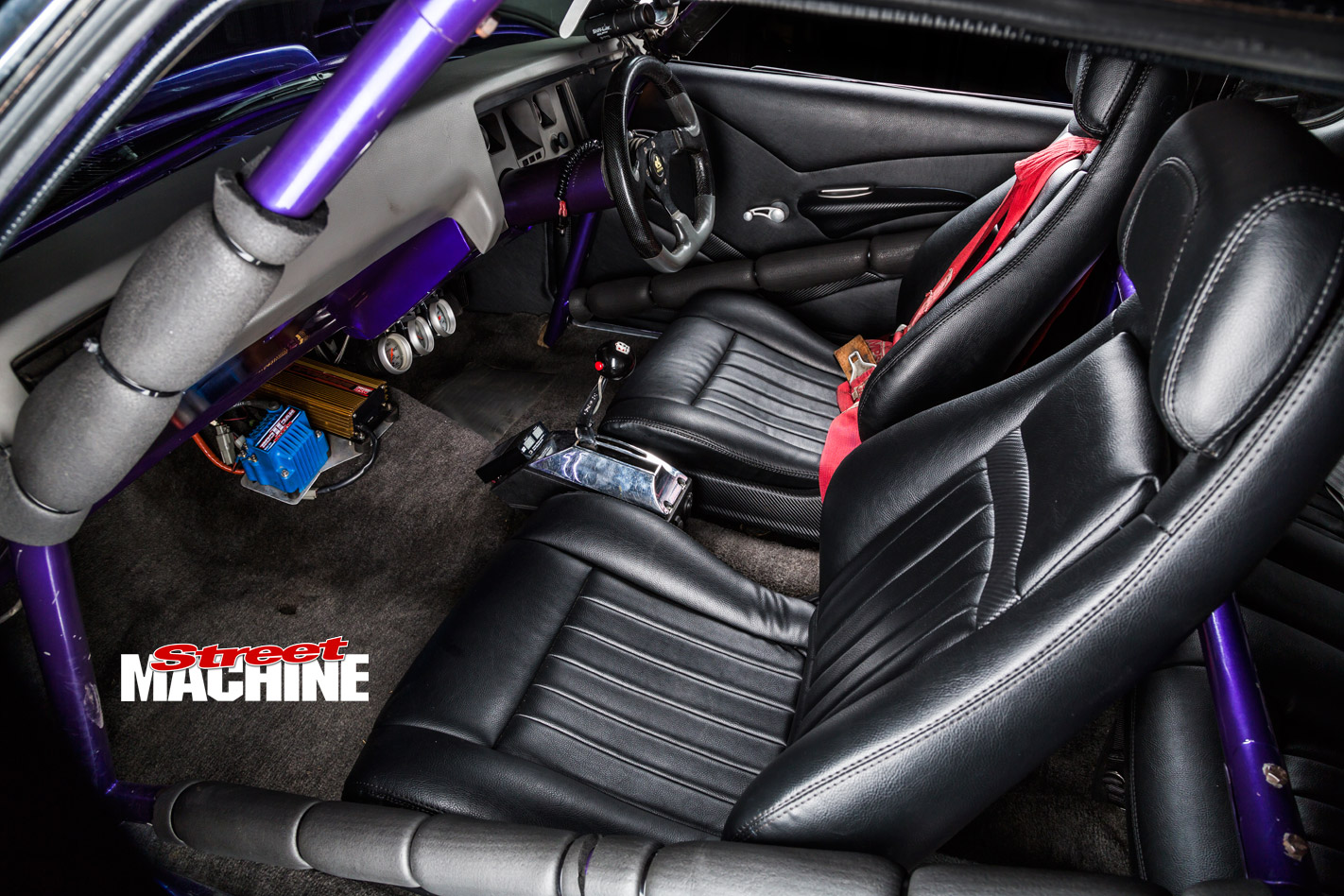 To that end, the brothers switched to a 510ci combo with Crower injection, which saw the HQ run a best of 9.20@143mph. But there was more to come.

“Next up was a 632-cube combo with an Enderle injector hat, which was good for 8.80@149mph,” Greg says. “It stayed in the car up until only a few years ago – the converter let go mid-track and did a heap of engine damage, so yeah, it needs some work.” 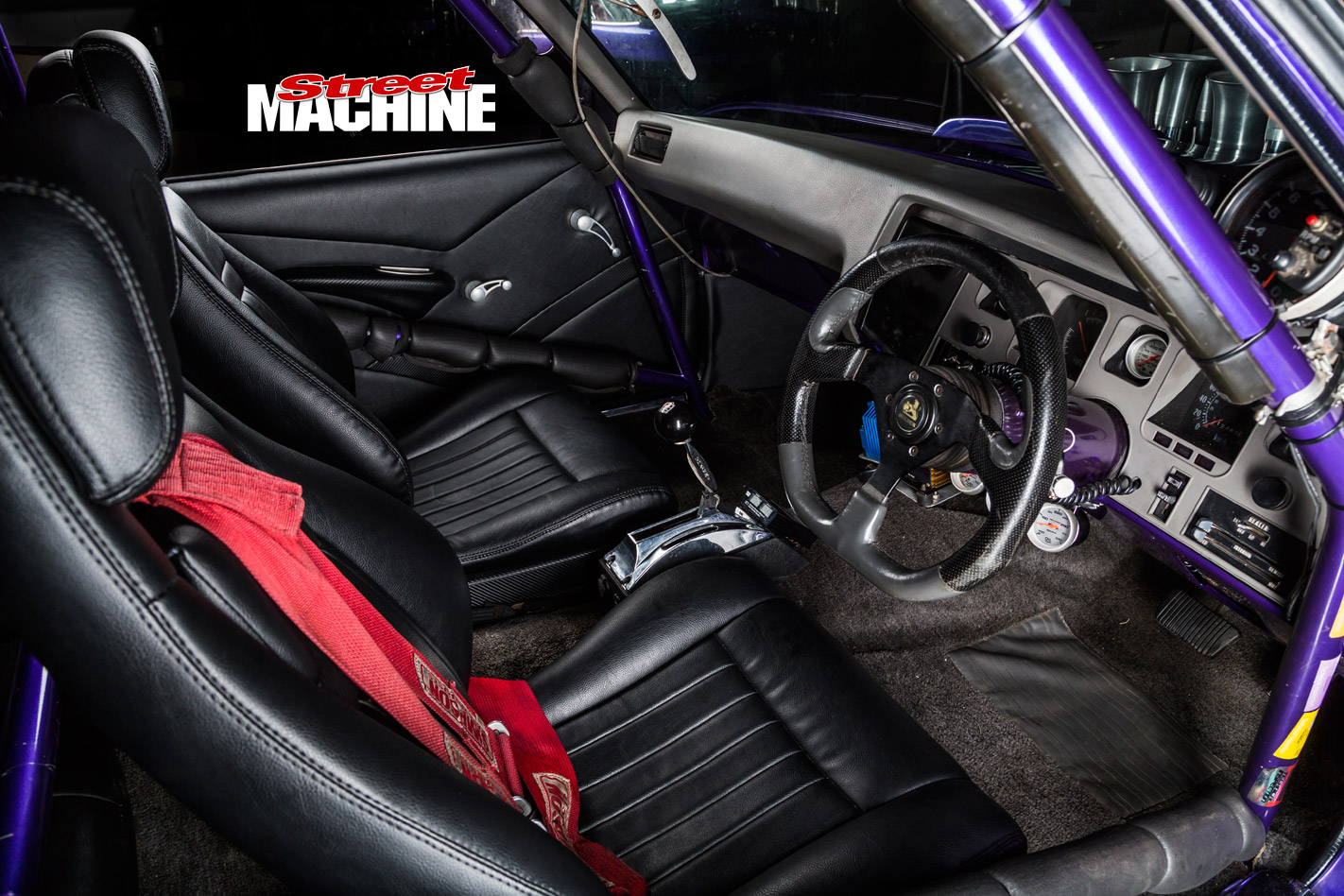 With Greg keen to put more streetability back into the car and the boys eager to have a chop at Drag Week, Geoff built the current 582ci engine.

A Chevy Bowtie block houses a Lunati forged 4340 crank and Oliver billet conrods topped with JE pistons, while a Comp solid-roller camshaft and Jesel belt drive round out the short motor assembly. Crower lifters and Trend pushrods send the action north to Jesel shaft-mount rockers actuating titanium valves and Pac springs. These are nestled in a pair of Dart Big Chief alloy heads, and a Kinsler mechanical injection system was added. 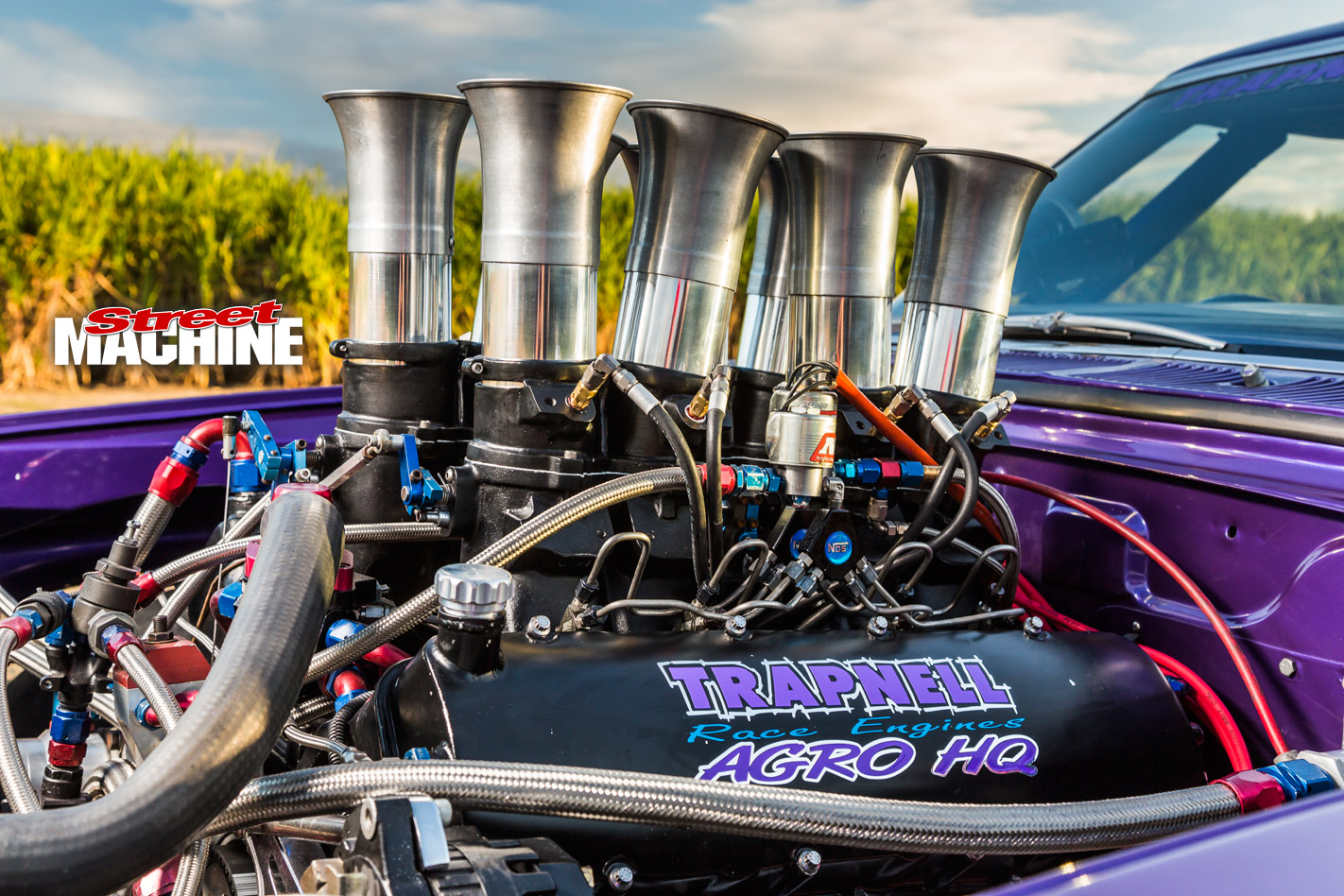 “We’ve dropped the methanol and run this engine on E85,” Geoff says. “It makes the car more streetable; we can legally meet emissions and improve fuel economy – which is vital for Drag Week – and still make decent power, so it is a win-win.” 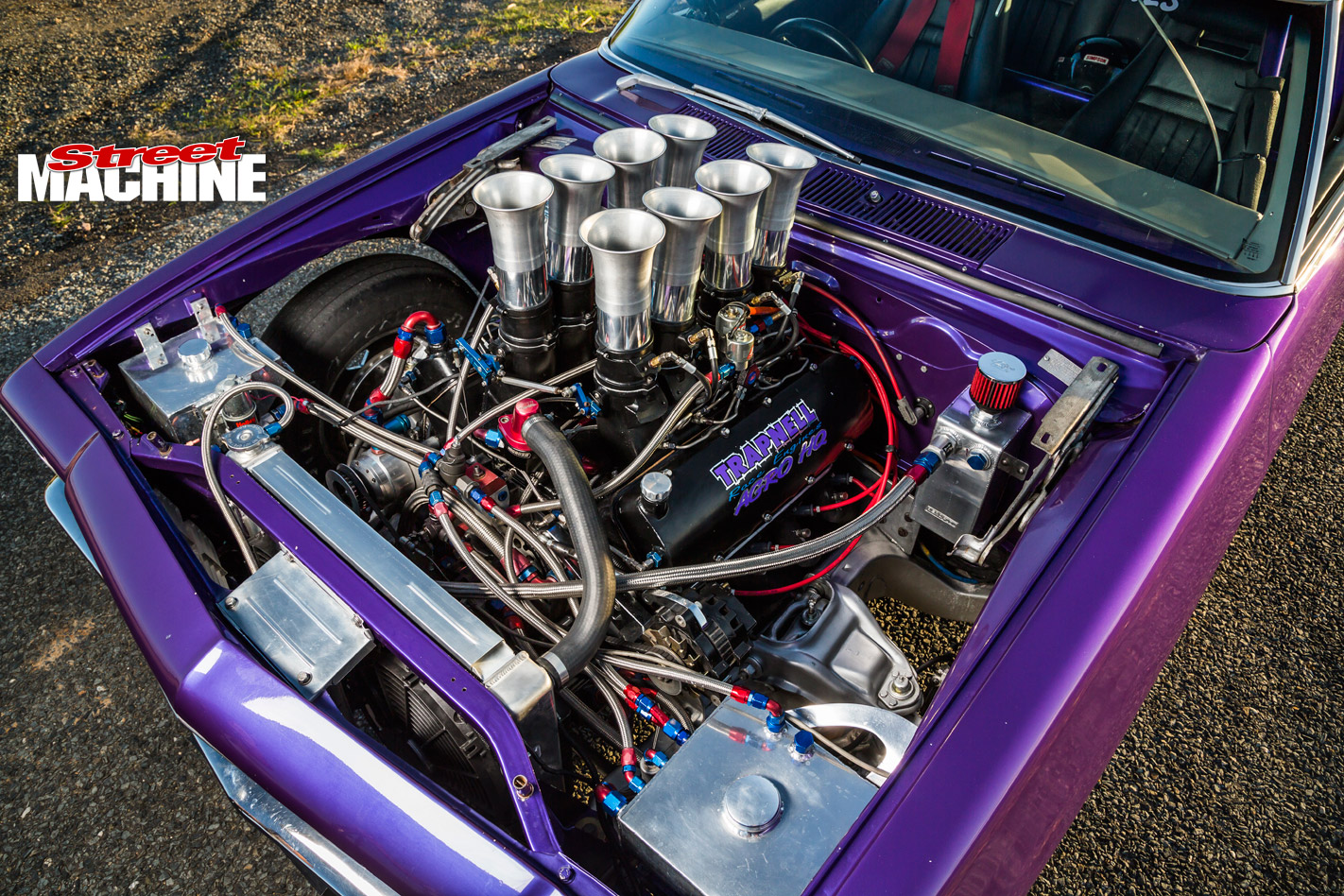 A set of custom four-into-one headers are now in their 16th year of service and feature 2.25-inch primary pipes feeding into a twin four-inch system with 3.5-inch tailpipes.

A big-core Asco alloy radiator was fitted to help compensate for the loss of the cooler-running methanol, while a brace of MSD ignition hardware handles the spark. 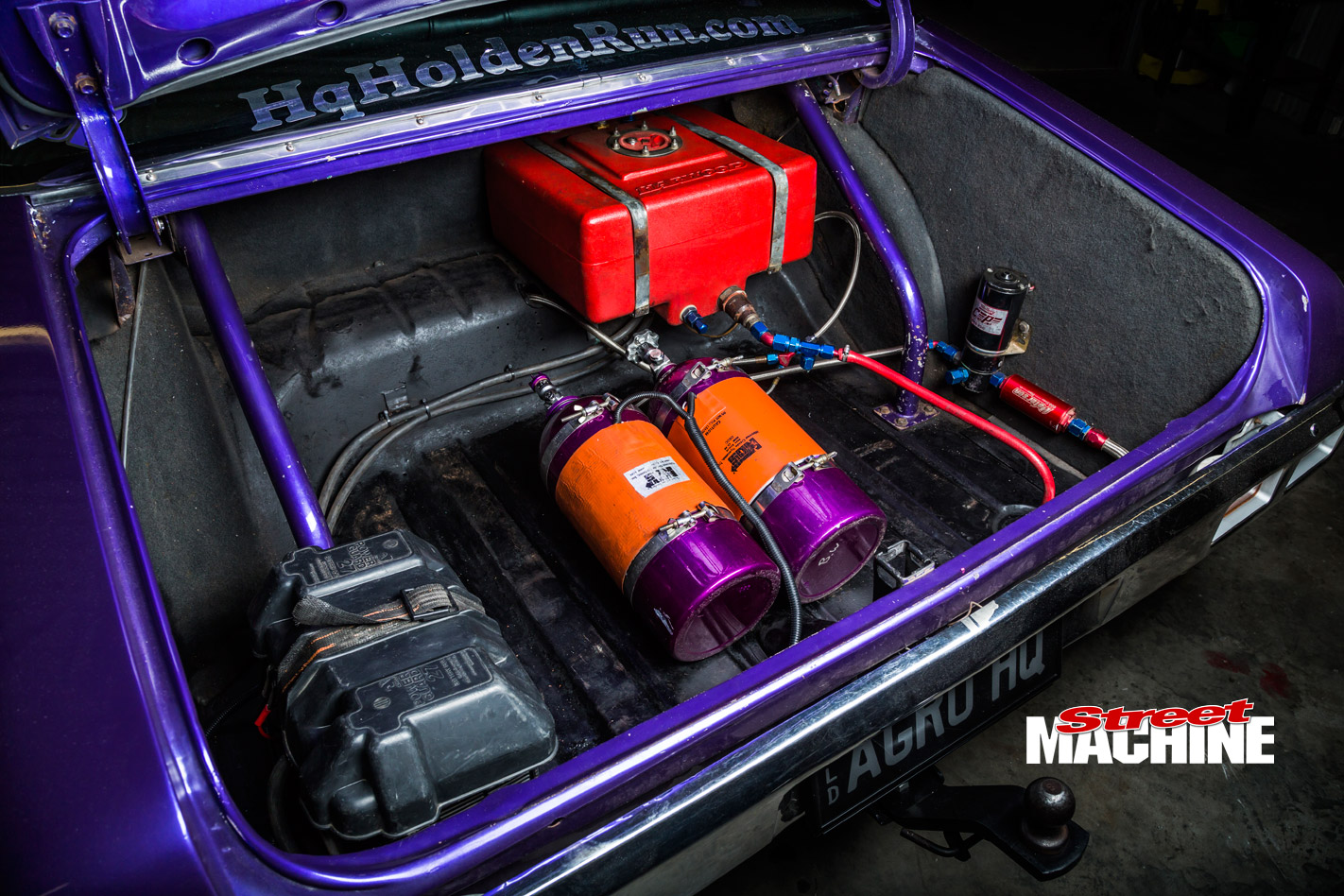 “The engine cranked out 1000hp recently on an engine dyno and we have a 200-shot of gas plumbed in for starters,” Geoff says. “If we can run nines before using the gas we’ll be happy. Greg’s just as hands-on with the engines as I am and is a gun fabricator too. Plus he’s a concreter by trade so is the best bloke to call on to grout-fill a block!”

A full-manual Turbo 400 transmission contains all the right hardware and is fronted by a TCE 5500 converter, while the 4.11 gears in the Strange-equipped nine-inch were swapped out for 3.7s in preparation for the upcoming US road miles. 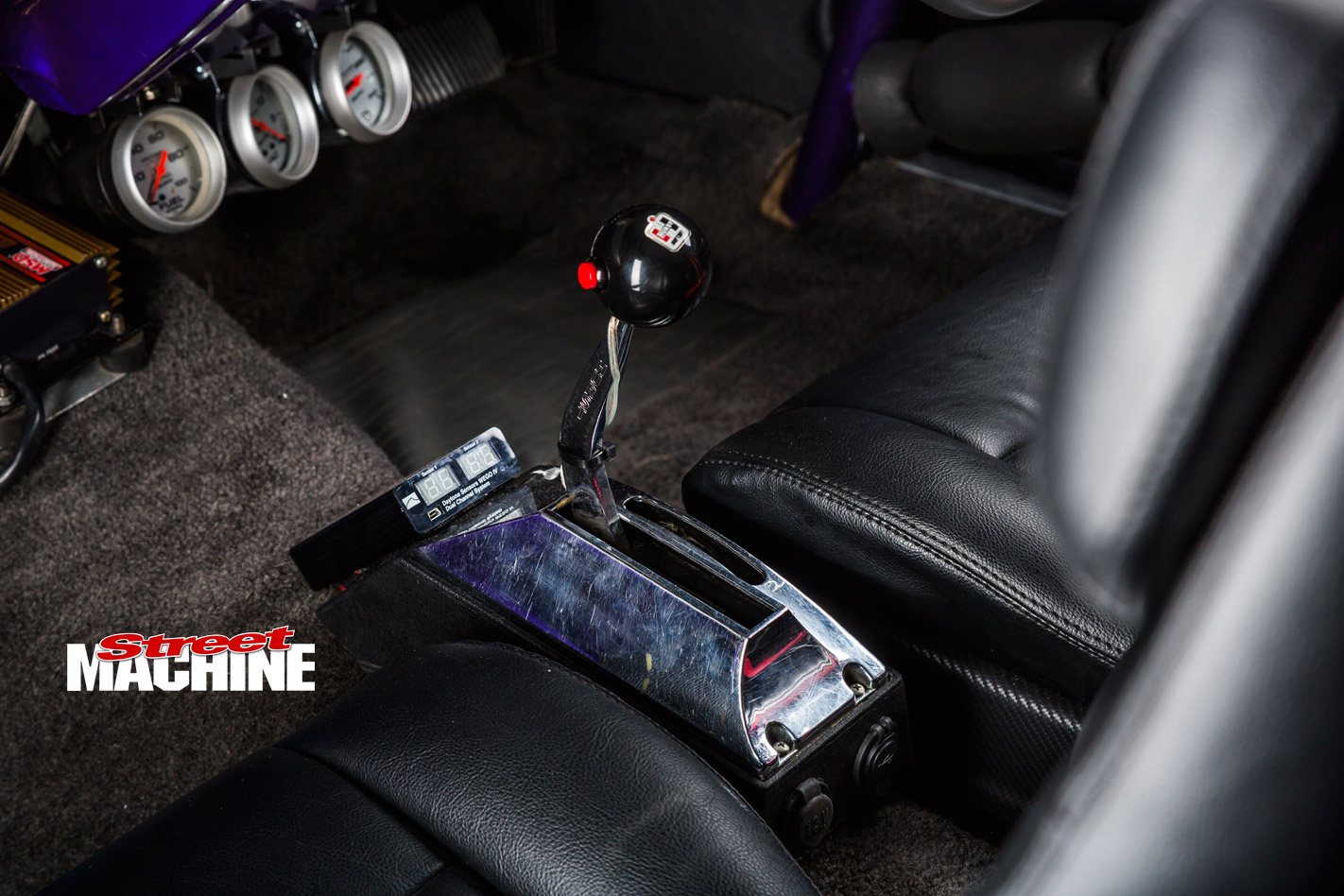 The brakes scored an upgrade, with Commodore discs and twin-piston calipers adapted to the front by Greg’s dad, Rob, while stock Ford drums are retained at the rear. 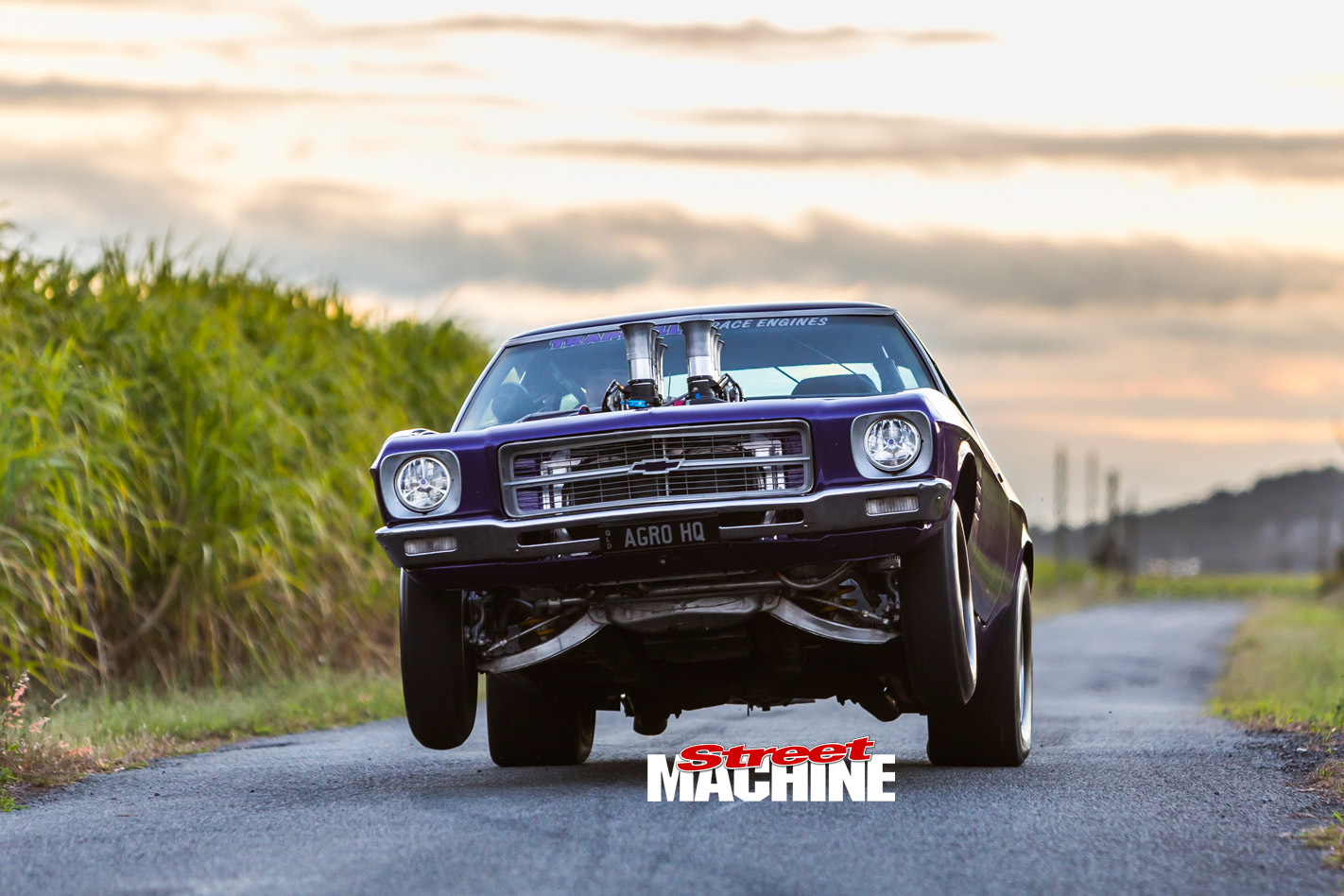 Lovells springs and Calvert adjustable shocks were chosen for the dampening, with the business end using boxed trailing arms. It’s fair to say the Monaro’s rear suspension cops a serious hiding. “No question,” Greg says. “We give the car a thorough check during and after each meet to make sure everything is intact. The aggressive launches, NOS, drifts and power skids have broken their fair share of parts in the rear end.” 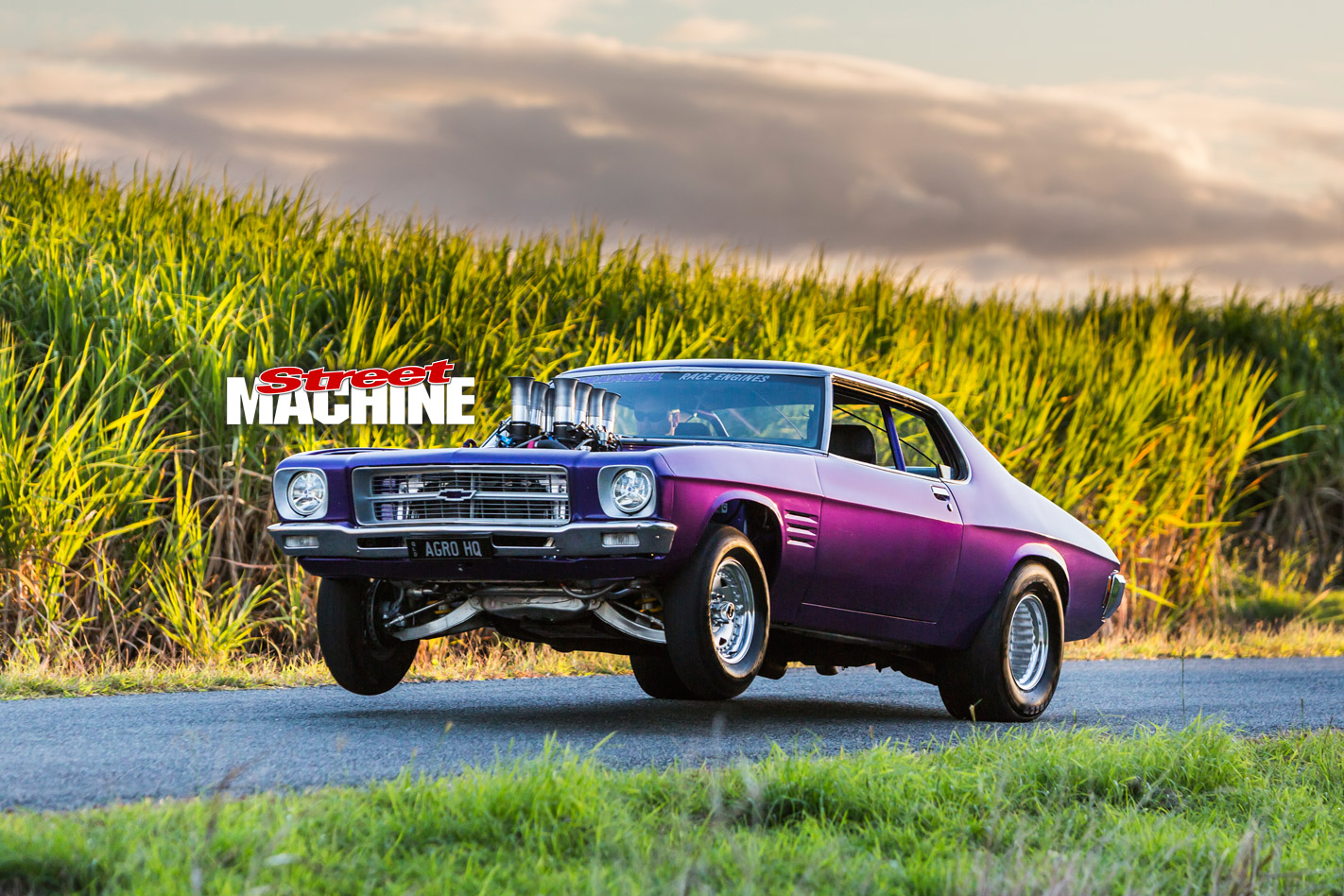 Center Line Convo Pros are fitted at each corner, measuring 15x3.5 at the pointy end and 15x10 for the rear, shod in a combination of Hoosier front runners and M/T Street Radials. 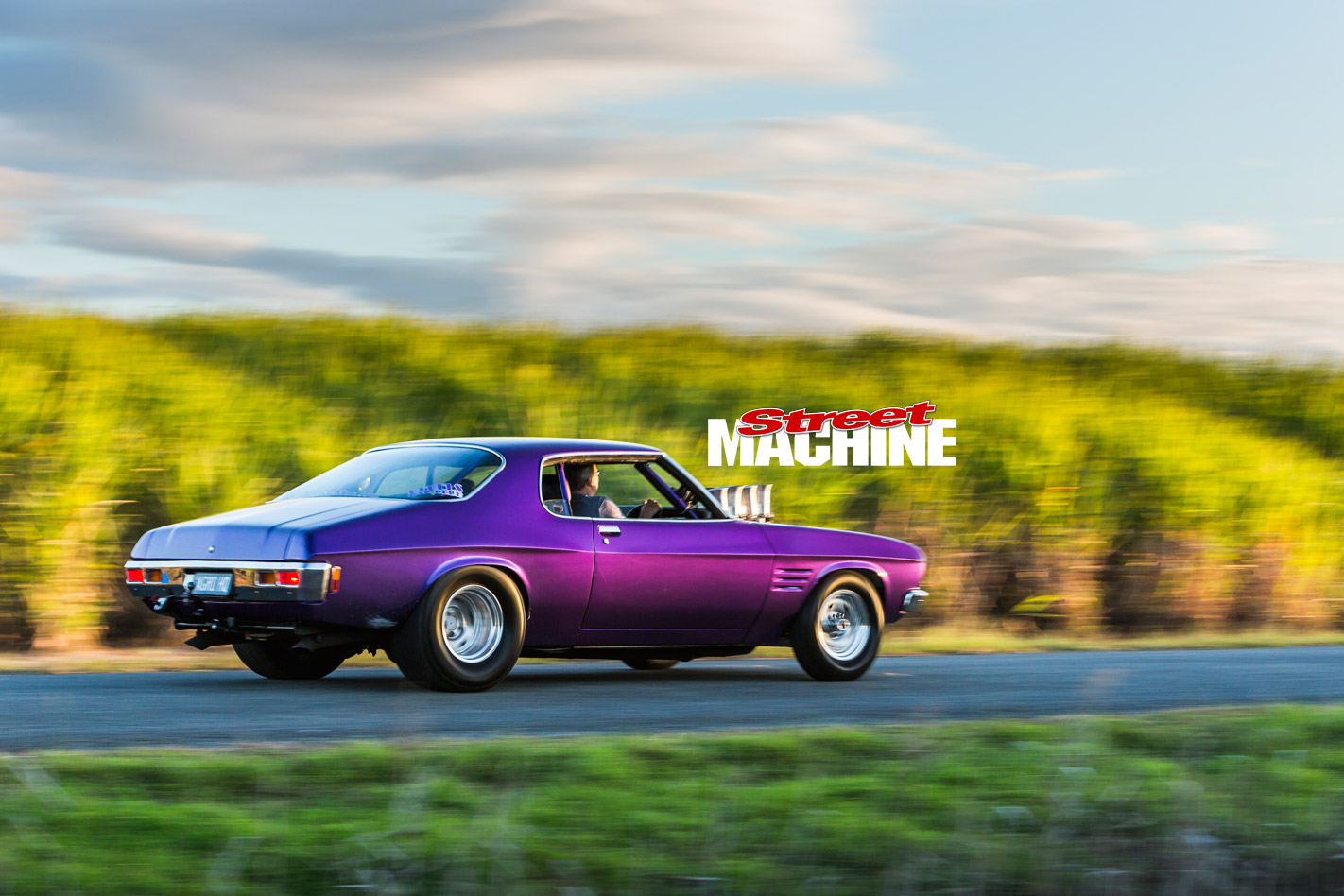 The interior was revamped by Shane from Image Trimming, who re-covered the mystery-brand front buckets and factory rear seat in black vinyl, with carbonfibre highlights incorporated for the surrounding surfaces. A host of additional gauges play their vital roles in and around the GTS dash, while the original, trusty Hurst Pro Ratchet shifter has been kept front and centre. 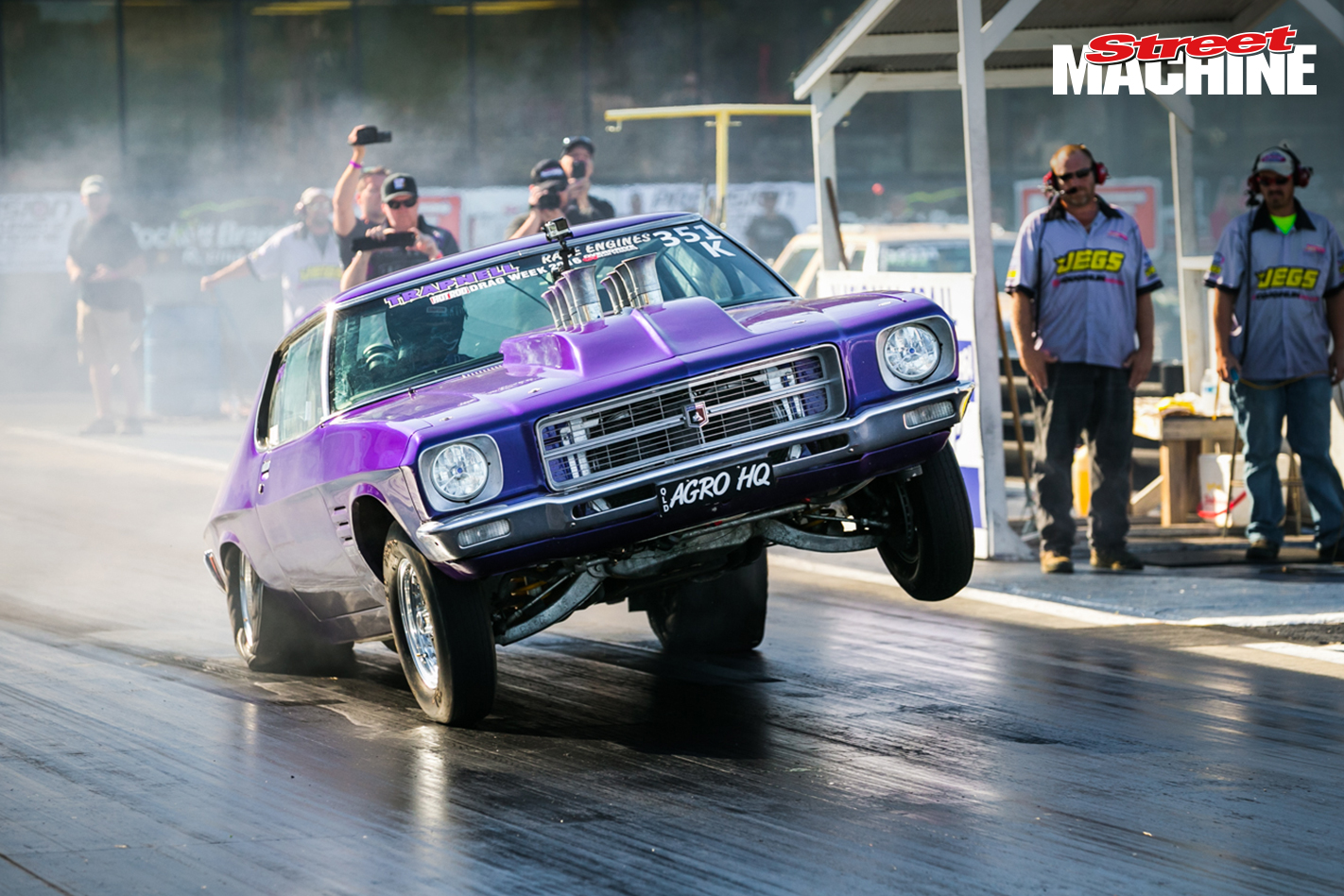 So it’s the calm before the storm for the Brothers Trapnell, who head to the US in September to meet with the car at Indianapolis, where hopefully all will be well. 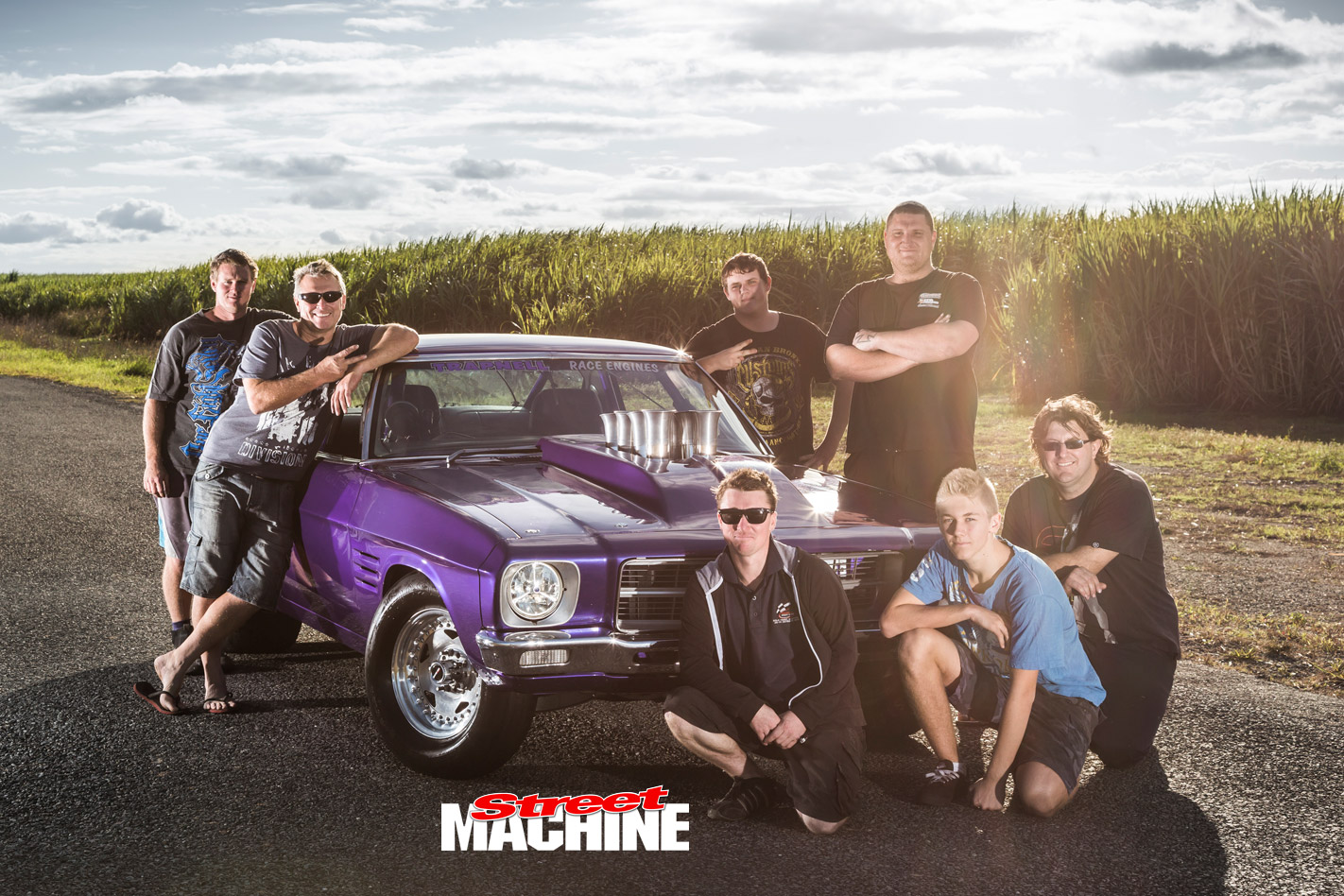 “It’s pretty nerve-wracking,” Greg admits. “We ran out of time to give it one last test at Willowbank so hope everything goes smooth. Then there’s the car being unpacked and shipped east without us to keep an eye on things; that’s another worry. I’ve never spent so much time away from any of my cars; I guess I’ll just have to learn how to let go!”