Paul Todarello’s stunning LX Torana hatch hit the track for the first time last week after debuting at MotorEx in 2014. The car nailed a 6.51@223.99mph at Sydney Dragway and there’s more to come. Check out the feature we originally published in the July 2014 issue of Street Machine on this twin-turbo monster below. THERE is just something so incredibly raw and unadulterated about a car that’s built to run a number, rather than to fulfil the draconian requirements of rego authorities. All the ADR hoo-ha is stripped away and you’re left to marvel at the craftsmanship and cutting-edge hardware. 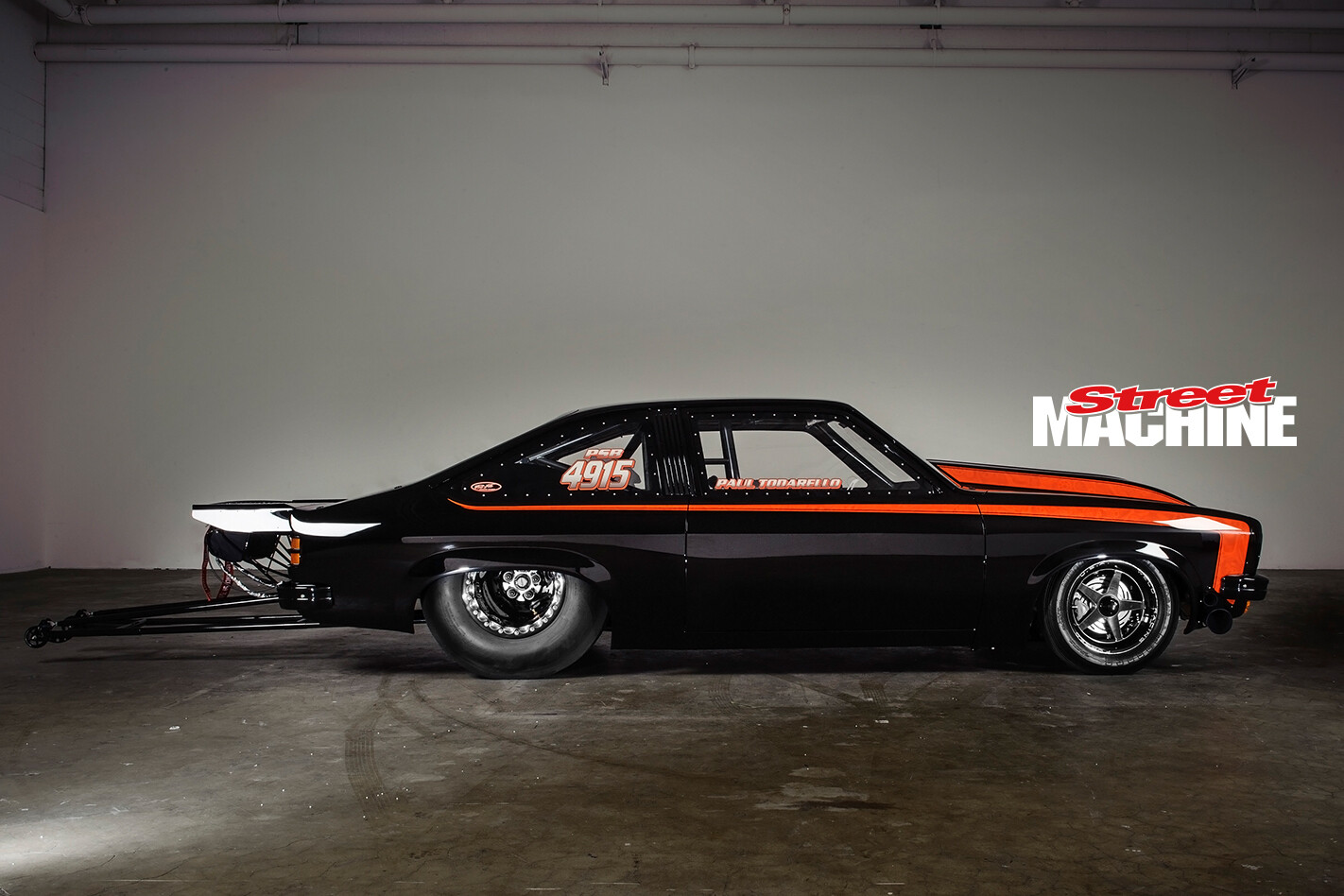 And when a race car is built to the standard of Paul Todarello’s sinister LX Torana hatch, it’s the ultimate expression of form complementing function; a car that can be appreciated both as a showpiece and as a purpose-built drag weapon.The hatch has been in Paul’s stable since he was just 18, and while back then it was a decidedly different beast, it has always been a bit of a toughie. “When I bought the car it had a 355 with VN heads and a Harrop manifold, a Powerglide with a 3500rpm converter, and a nine-inch with 4.11:1 gears,” Paul says. “The only thing I didn’t like was the trim – it was black velour with bright fluoro graphics – but I didn’t care because it was always destined to be a race car.” Paul hooked some spray up to the little 355, stripped out the trim and fitted a rollcage, mini-tubs, parachute and an alloy rear wing and ran some respectable numbers. But when the plastic motor dropped a valve, he knew it was time to step things up. “We tore the engine down and it wasn’t a happy sight,” he says. “There wasn’t much that could be salvaged, so that was my excuse to build a new engine – something bigger and badder. I went and spoke with Paul Sant from ProFlo Performance about a killer new combo.” It was a wise move, given ProFlo are responsible for some of the toughest street and race cars in Australia.  And, as it turned out, the crazy trim helped them figure out it was the very same LX that Paul Sant had built as his first car years before! We even featured it in SM, March 1996. The two Pauls got together and nutted out another 355ci combo aided by an F2 ProCharger, aiming to go after the Modified Street Blown frontrunners. Parts were bought for the new engine, but with work taking Paul away from home for a few years, he didn’t have time to invest in the project. “When I finally returned, I called into ProFlo for a chat about going a different route with the car,” Paul explains. “If I was going to be even remotely competitive, we had to step up our game big time.” ProFlo’s new chassis shop had just opened, and the Torana was the first project on the chopping block. They went to town on it – in fact, the only factory chassis components that remain are the front rails. The firewall and chassis all the way back to the rear clip is made from chrome-moly. The front crossmember is fully fabricated out of moly too, and has been designed to keep the engine and associated hardware as low-slung as possible. Stock steering, suspension and braking components have been replaced with a billet steering rack, Strange struts and Strange four-piston brakes. 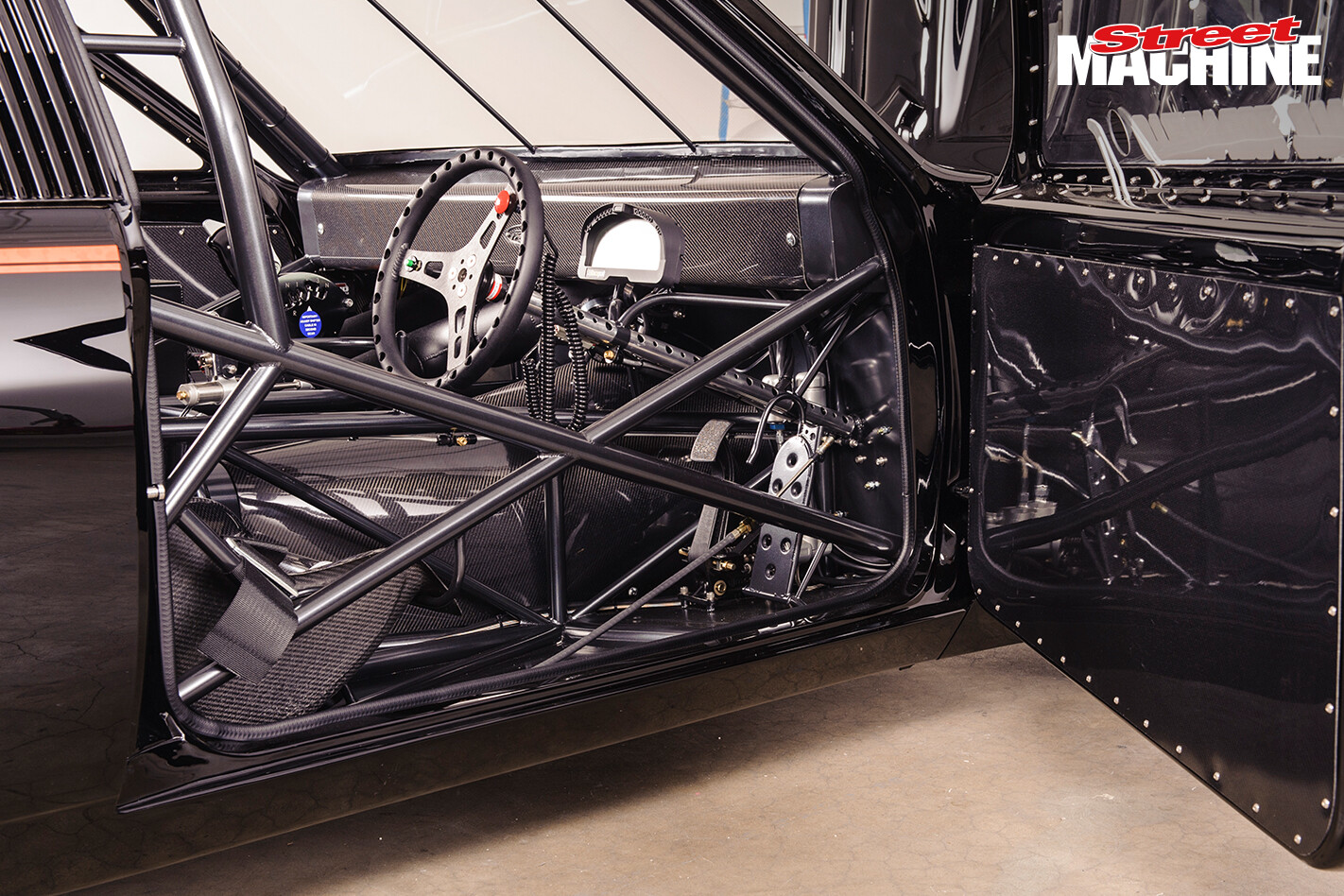 Out back is a custom fabricated four-link sprung by Strange coilovers, cradling a full-floating sheet-metal nine-inch with a Tom’s Differentials billet centre and 3.70:1 gears. It too carries Strange four-piston anchors, and massive 16x16 Weld Delta rollers shod in 33x10.5 Mickey Thompson hoops. But the boosted Holden donk was never going to cut the mustard in the Pro Street Blown ranks, which was what Paul was now aiming for. A twin-turbo 427ci LSX was first prescribed, but it was eventually sold – along with the Holden – to bankroll a much heavier-hitting option. “We wanted to do something really special, and after plenty of research, we ended up going with a big-block Chev with twin Precision turbos.” It’s been said forced induction is an apt substitute for cubic inches in this day and age, but considering Paul’s engine weighs in at a hefty 557ci, and is force-fed by a matching pair of 88mm huffers, it’s fair to say it has both bases well and truly covered. “Paul and I both agreed this would be the ultimate way to fulfil our fantasies and take on the Pro Street Blown top dogs,” Paul says. 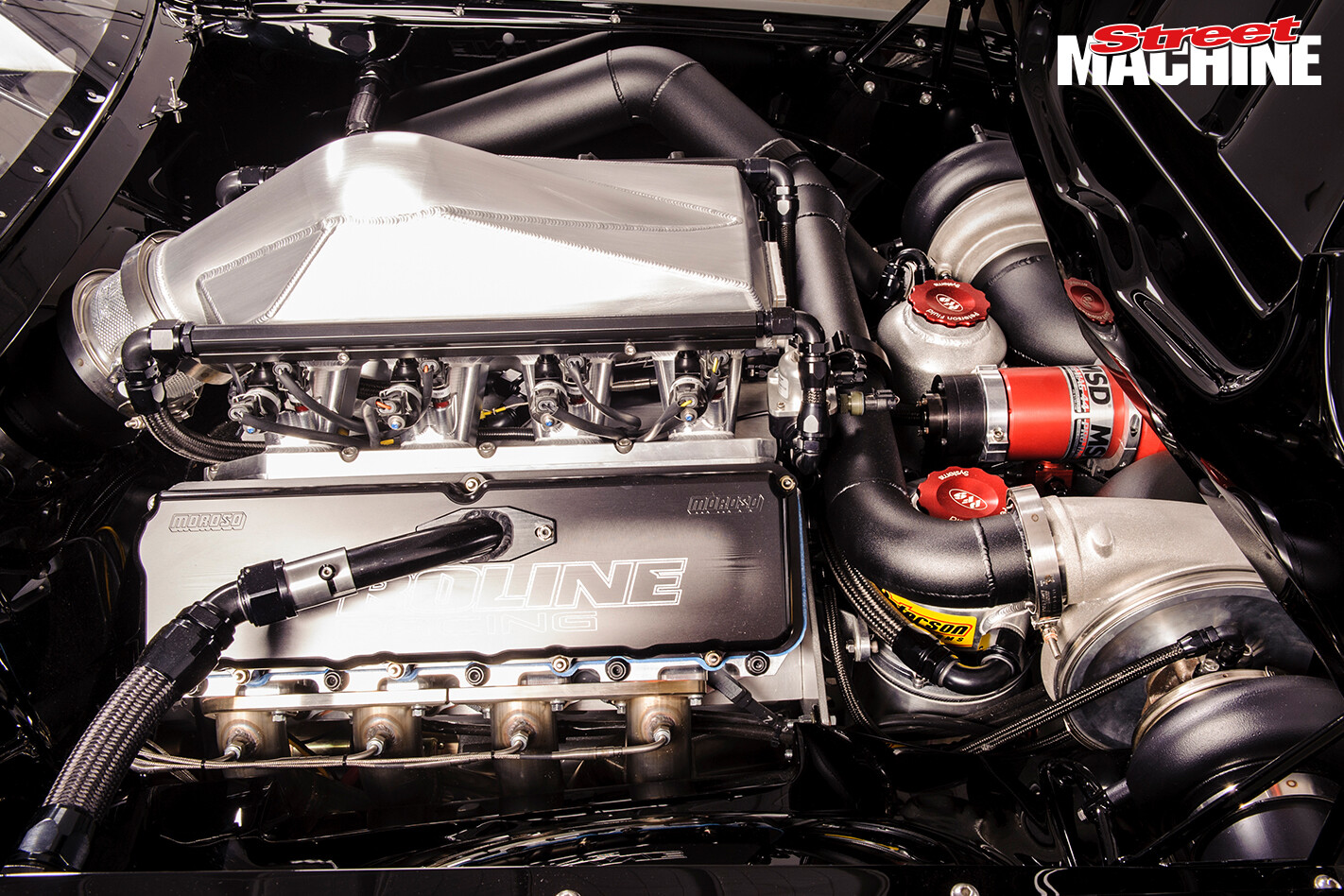 “We enlisted the help of Proline Racing Engines in the States to help us put together a unique and reliable package to meet our rules over here for Pro Street Blown. They machined it up and did the clearances, then shipped it over for Paul to assemble here in Australia. It hasn’t been dynoed yet, but we’re expecting between 2000 and 2500hp, at up to 40psi.” Proline went for a set of Diamond pistons and BME alloy rods winging off a Sonny Bryant crank, and the heads were done by Alan Johnson Performance Engineering in the States. There’s a total of 16 Precision injectors, which supply gallon after gallon of methanol via a custom-built manifold from Shaun’s Custom Alloy. 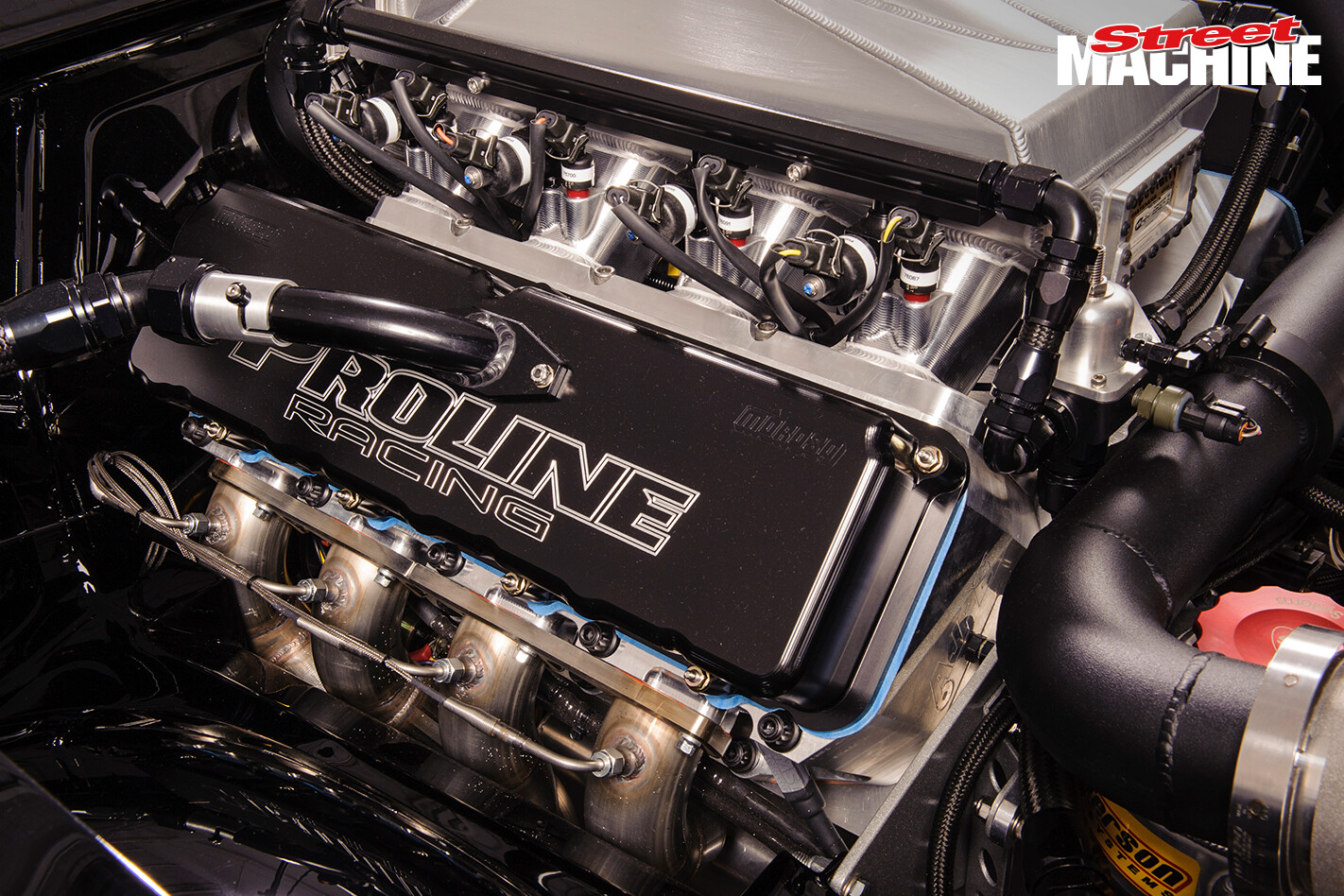 The Precision PT4000 Pro Mod-spec water-to-air intercooler system rides shotgun in the passenger seat, with a floor-mounted pump circulating water between the reservoir and the heat exchanger. There’s more heavy-duty hardware tucked away in the cabin too, including the Big Stuff 3 ECU, bump box, fire system, custom-made overhead switch panel, Simpson harnesses and of course the extensive bar-work. The dash is Dzus-clipped in and can be removed in 30 seconds flat, allowing access to fuses and relays for quick and easy troubleshooting at the track. “That was the priority for the car – everything had to be functional, practical and accessible, but it had to look the part, too,” Paul says. The cabin is a sea of carbon fibre; aesthetically pleasing, functional and lightweight. The carbon wheel tubs and seats were available off-the-shelf, but everything else – the door cards, floorpan, tunnel and dash – had to be custom-built. Because the firewall was shifted back by four inches, everything else had to move too. The whole cockpit was structured to be an ergonomically perfect fit for Paul, from the seating position to the bespoke steering column and positioning of the pedals, Racepak dash and air-operated billet shifter. 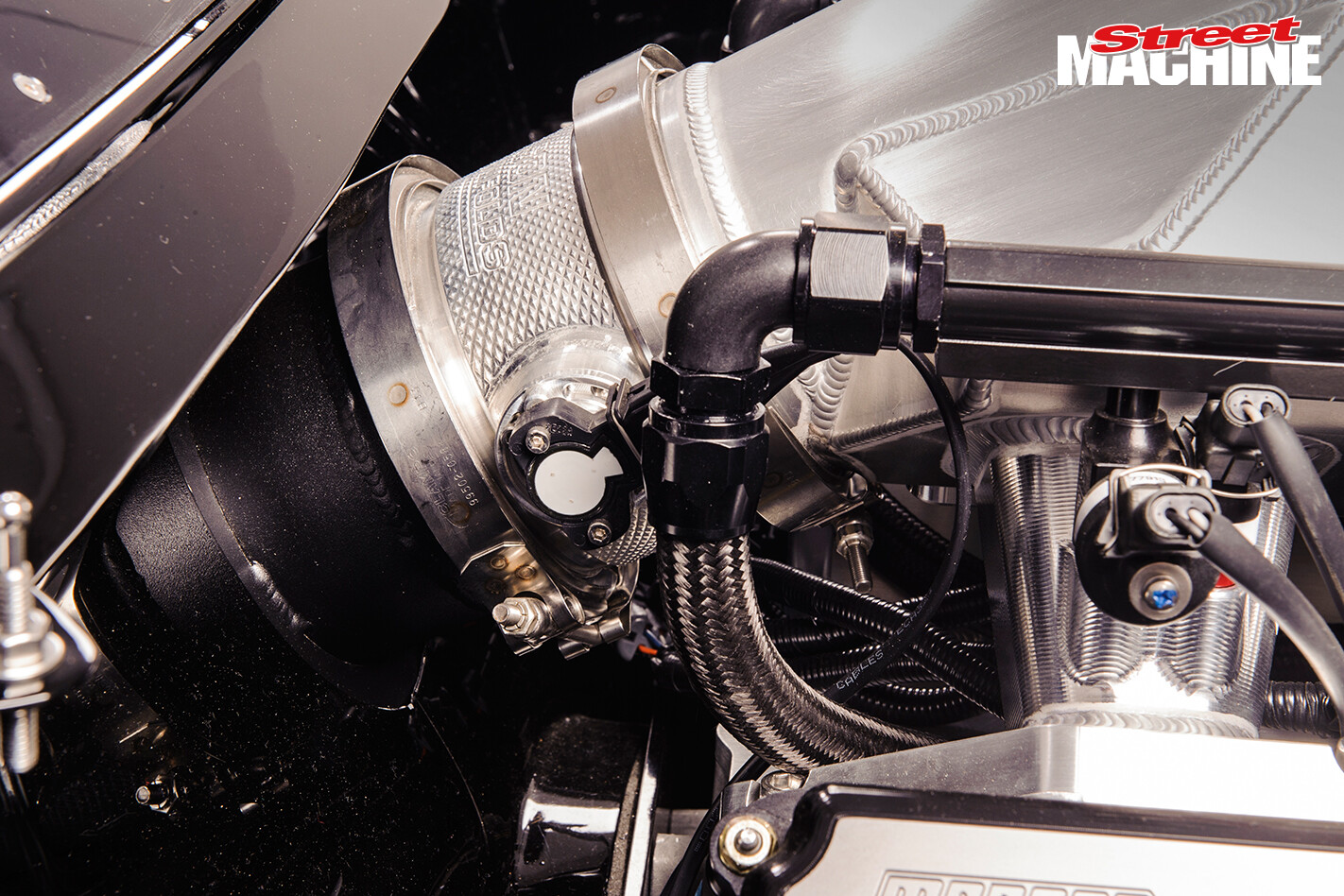 The build was progressing well, but a phone call from MotorEx head judge Owen Webb spurred things on even more. “Owen asked if we wanted to take the car to MotorEx,” Paul says. “It almost seemed impossible because the fab work on the manifolds and turbo plumbing wasn’t even started, the paint wasn’t done and the wiring wasn’t complete; it was just an empty shell with a cage and a few bits and pieces. With only 10 weeks until the show it was game on, and the boys worked around the clock.” Daniel Slater at Kingpins Kustom Panel & Paint in Newcastle was put under the pump when the car rolled into his shop. Not only did the deadline border on the ridiculous, but the vast majority of the hatch’s bodywork was fibreglass and carbon fibre, and Paul’s colour of choice was gloss black. Lucky he works well under pressure, eh? “With only four weeks to turn the car around, Daniel worked absolute wonders,” says Paul. “The paintwork is flawless and you’d never know that the body is ’glass; it’s a true credit to him and his team.” With HOK black duco and orange stripes applied, the car returned to ProFlo for the fit-up just weeks out from its MotorEx debut. And when the sheets were yanked off, the response was overwhelmingly positive. “We were wrapped with the response the car had at MotorEx,” Paul says. 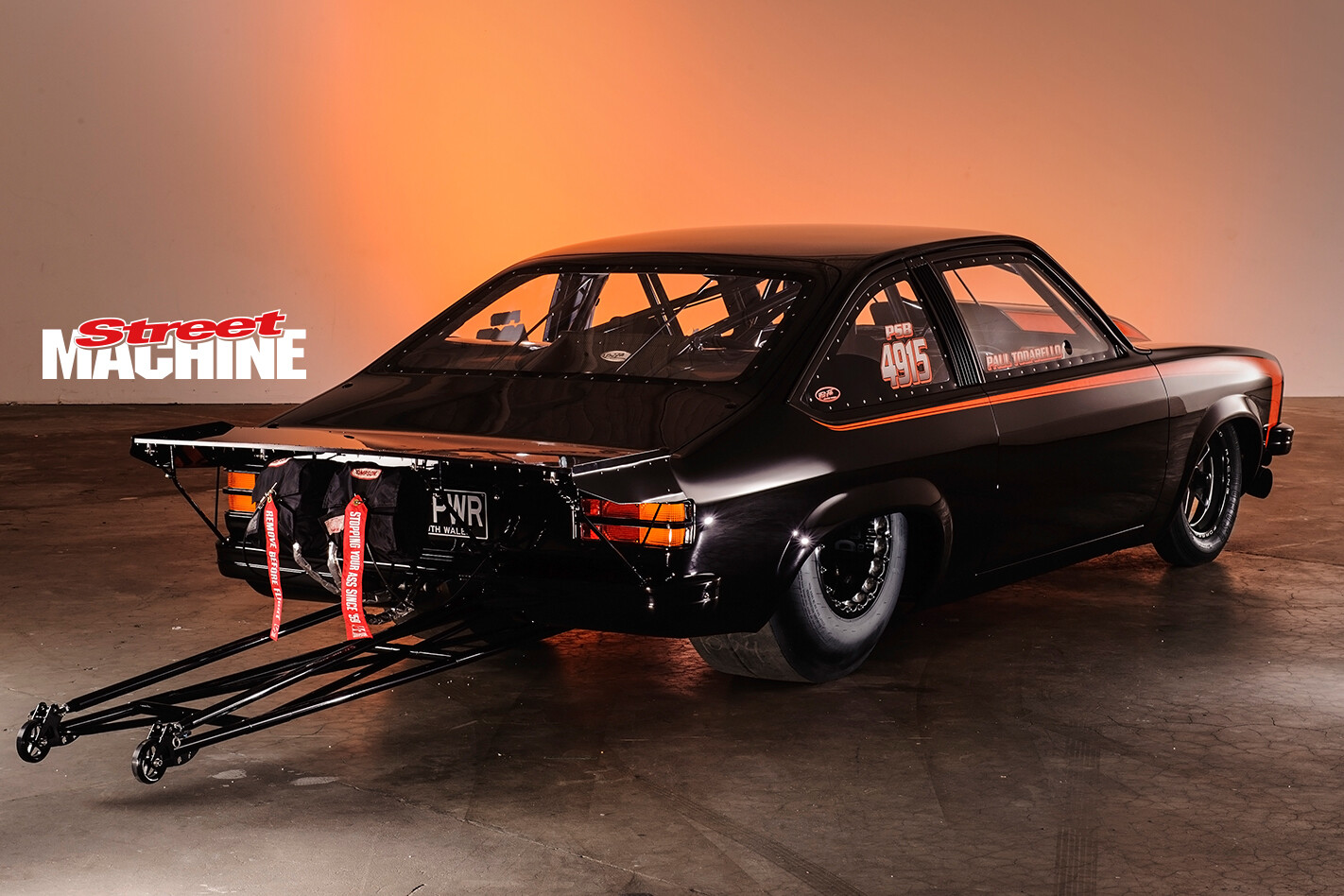 “I was just speechless with the way everything turned out. I entrusted Paul Sant with the entire build. The fabrication was mind-blowing, the paint and panel was flawless, and the execution of the entire car was beyond my wildest dreams. I can’t thank every person involved enough for what they did to help me pursue my dream.” The real dream, however, is getting the Torry across the Sydney Dragway blacktop in the shortest possible time. “We need to finish off a few bits and pieces on the car and then we can go testing,” Paul says. “At the moment the top boys in Pro Street are running 6.70s, and I think the car has low-seven potential. The car is a million bucks and everything’s there, but it’ll be a very steep learning curve. Hopefully we can give the Top Ten Pro Street list a bit of a shake-up!”