Keeping it low-key and streetable was always the plan for Mark's XW GT, but there's still 642hp on tap

A LOT of the cars we feature in SM are comprehensive rebuilds where the owner has taken a worn-out old car, completely stripped it and then spent years turning it into their interpretation of the perfect street machine. But sometimes it’s easier to get something that’s already had a lot of the hard work done and then tweak it to your own personal tastes. Often it can lead to a bit of a stigma, where the car will always be referred to as “so-and-so’s old car”, but in the case of Melbourne-based Mark Psihountakis’s XW GT, that was never really an issue. 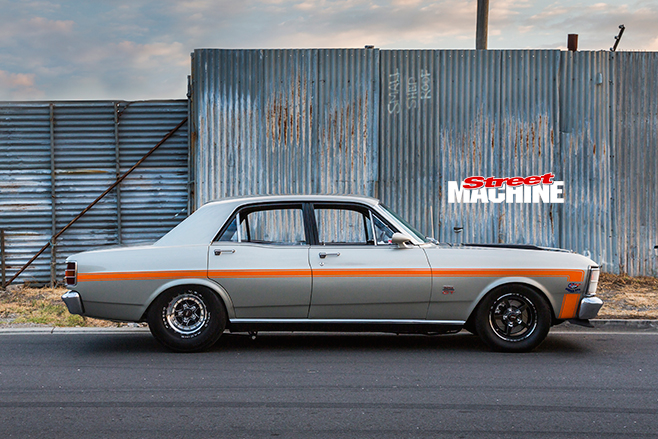 With a set of factory five-slot wheels bolted on, Mark’s XW would look like a nicely restored GT Falcon, although traction would be a bit of an issue. But with GT leaf springs and a set of CalTracs, the car hooks up nicely

“I bought the car from Sydney about 10 years ago,” Mark begins. “It was already painted, the interior was there but I put new carpets, new roof lining and door trims in. It was a Top Loader car with a 400hp 351ci Clevo, but I fully transformed the car into what it is now.” 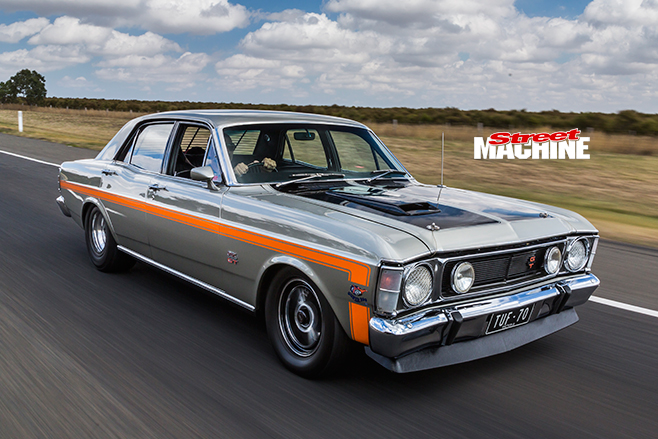 What it is now is a very tough street cruiser, and while Mark says he didn’t really build it with drag racing in mind, it should be capable of a mid-10-second pass thanks to the transformation of the driveline, an overhaul that became necessary after the old 351 developed a bit of a rattle in the valvetrain. “I drove it for about 12 months before the engine shit itself, so I took the car to Competition Engines and built a mild 408ci Clevo, but I went through two clutches; they wouldn’t hold the power,” he says. By “mild”, Mark means somewhere around the 540-550hp mark, so the decision was made to go to an auto to make life a bit easier on the driveline – and also his left leg. 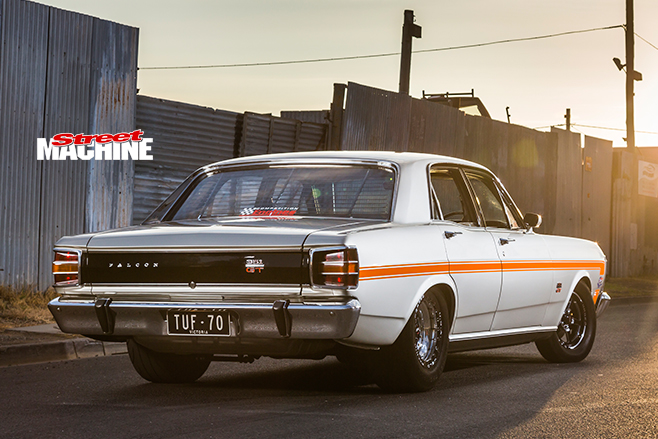 “After I decided to put the auto in it I thought I would step up the power and put a bigger cam in it as well,” Mark explains. “I had a dual-plane CHI on it, so we went to a single-plane CHI and stepped up the extractors as well. I had 1¾-inch extractors on it but went to 17/8-inch. I could have gone to two-inch primaries, but the car was built more for the street than strip.” The pipes did require a bit of massaging to get around the XF power-steering box, before heading back to twin three-inch pipes and Magnaflow mufflers that dump just before the diff. 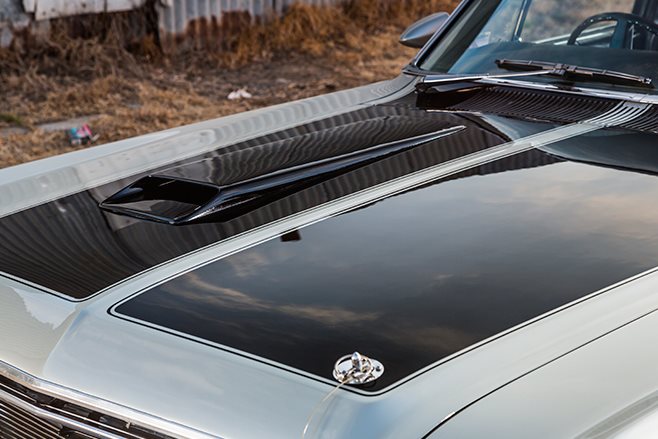 “I could have put a crazy cam in it that makes the power at 7000rpm, but it’s been built where it’s got a lot of good torque down low so it’s streetable,” Mark says. “It’s not a drag-spec motor. I went with the 208cc heads instead of 225cc because you make a lot more torque around 2500-4000rpm. I’ve got the best of both worlds – it’s still good on the track but it’s also really good on the street.” 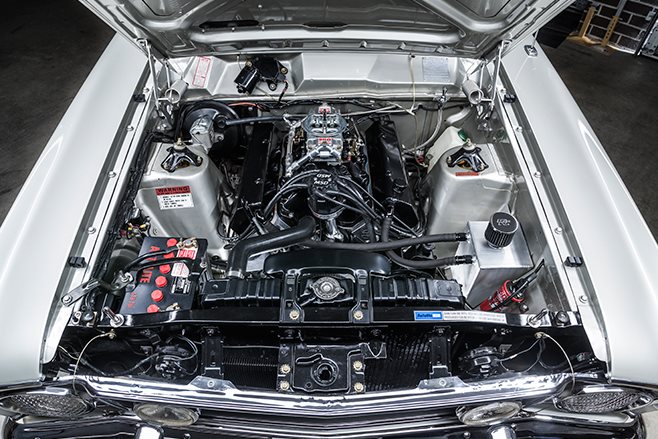 It’s all neat and tidy under the bonnet, even though none of the wiring has been hidden; even the battery is in the stock position. Mark wanted to be a little bit stealthy and painted the bulk of the engine black

The engine is topped off with a 1000cfm Pro Systems Holley, and though Mark admits the fuel economy isn’t the best, that’s the farthest thing from his mind when he’s out cruising with his family and friends. Smiles per mile are way more important than miles per gallon, and with 642hp at the motor, there are plenty of smiles to be had. 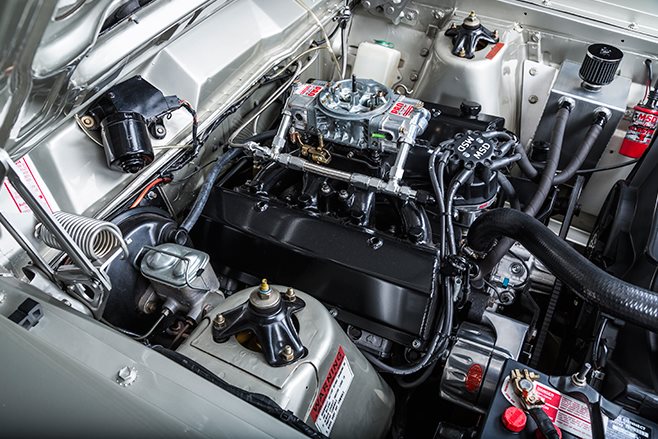 The CHI single-plane intake was machined down so that everything would fit under the bonnet. Mark says he might have sacrificed 20hp or so, but when you’ve got almost 650 to play with, does it really matter?

As I mentioned earlier, the whole process started when Mark decided to chuck an auto in the car, but not just any auto. He went straight to Mike’s Transmission in the US and ticked the box for the Ultimate Vasco C10, full of bulletproof stuff like a 26-spline input shaft, solid drum and big servos – not to mention the transbrake. Yep, the car wasn’t built for drag racing, but it’s good to be prepared. 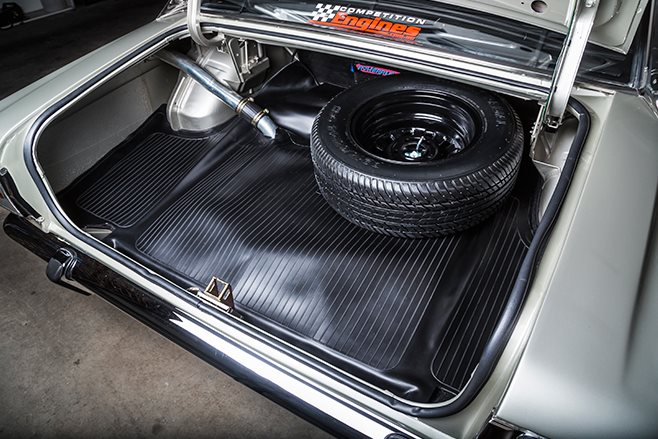 There’s a three-inch moly tailshaft with Strange yokes transferring the rotating power to the nine-inch, which has been shortened just enough to fit the 255/60/15 Mickey Thompson rubber and 9.5-inch-wide Weld AlumaStars under the guards. The leaf springs are heavy-duty GT-spec and are still in the factory location, and a set of CalTracs have been bolted on to help plant the diff during launches. The Calvert 90/10 shocks up front are complemented by a set of nine-way adjustables from the same manufacturer out back. 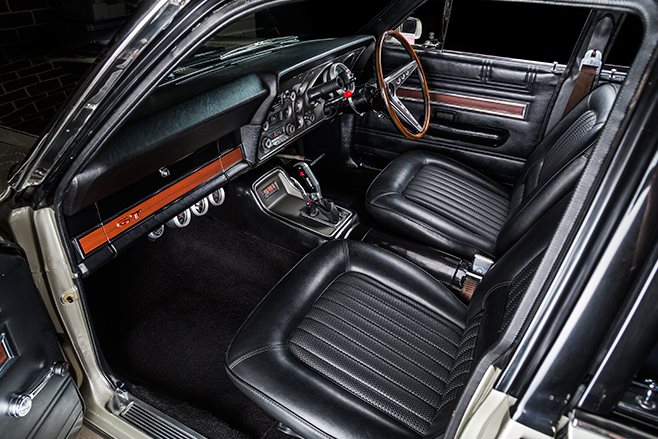 Basic black GT-spec interior, but with a few upgrades. While all the factory gauges in the dash work, Mark has added a trio of Auto Meter gauges to keep tabs on the 642hp Clevo under the bonnet, while the air/fuel mix is monitored by an Innovate gauge. The TCI Outlaw shifter gives a pretty good indication that the old Top Loader has been swapped out and there's a transbraked C10 in its place

Mark’s entire philosophy behind the build was to keep it pretty low-key – nothing sticking out of the bonnet, not even a reverse-cowl. After all, these days you don’t want to draw too much attention from the boys in blue: “The only time I’ve been pulled over by the police, they just wanted to check the car out!” Mark laughs. 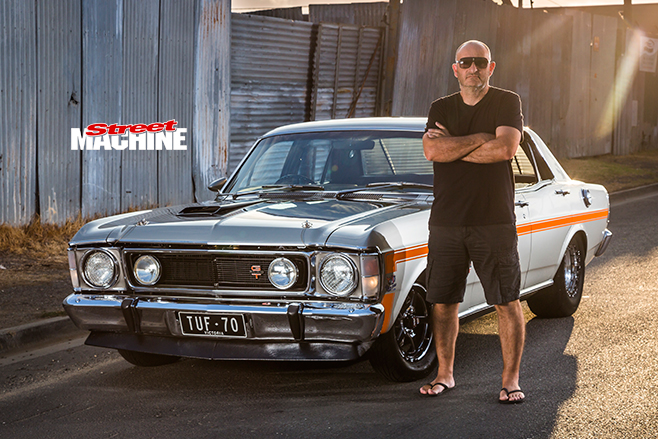