DOESN’T happen all the time, but every so often, something arrives at Summernats that is bang on target. It might be for astonishing craftsmanship, subliminal detailing, cutting-edge innovation, the sheer wow factor or a mix of all those things. 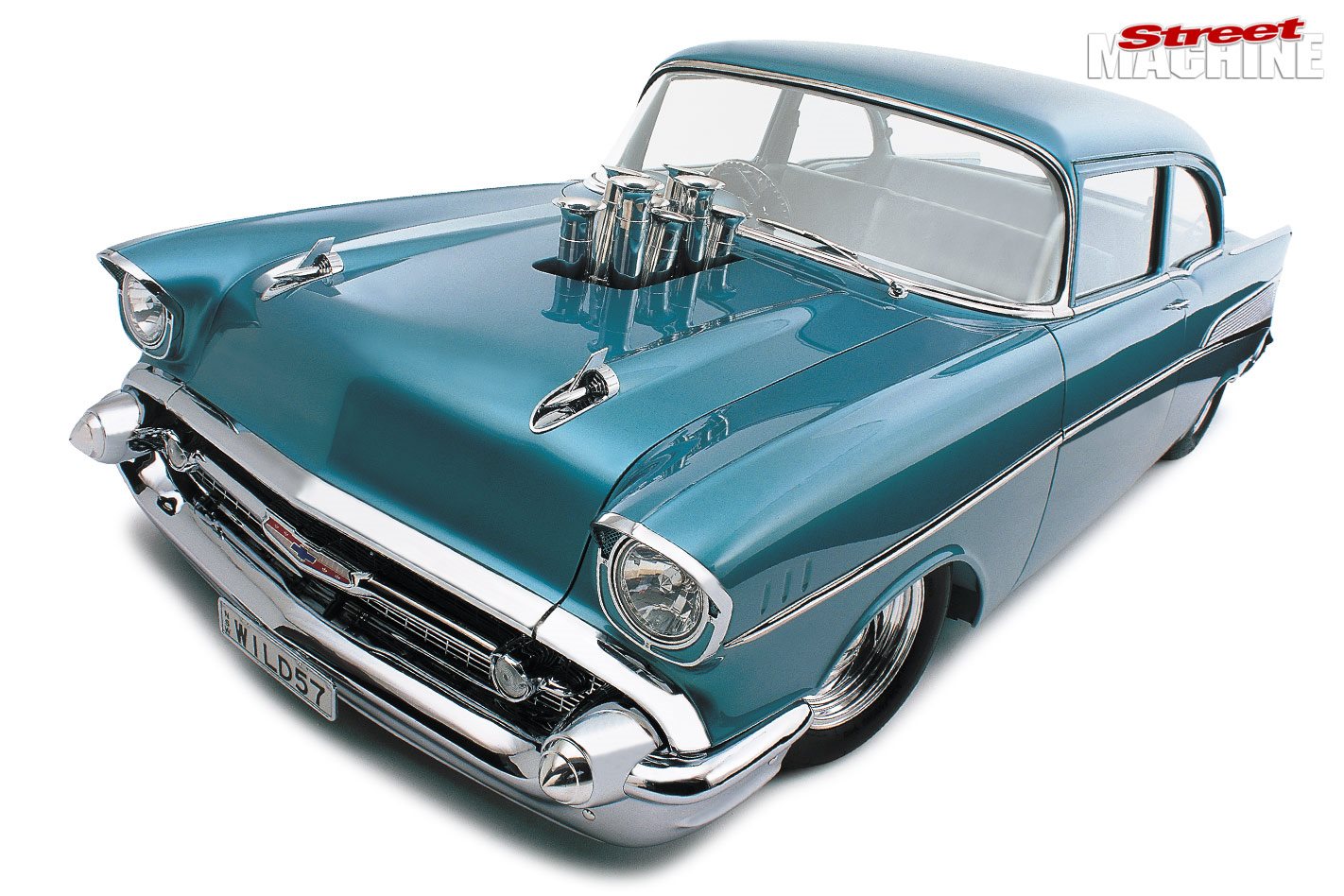 This year, that special something was Anthony and Roseanne Sant’s ’57 Chev. It shot to the top of the Meguiar’s Elite Hall judging on Saturday with a full clip of awards, including the double-barrel bullseye of Top Judged and People’s Choice.

The craftsmanship wafts over you like a cool summer breeze. At first glance, its perfect panels, subtle colour and factory chrome defines it as a restoration that doesn’t blast the observer in the face with colour or clout. Then it gradually reveals its character and detail to those who take the time to look. 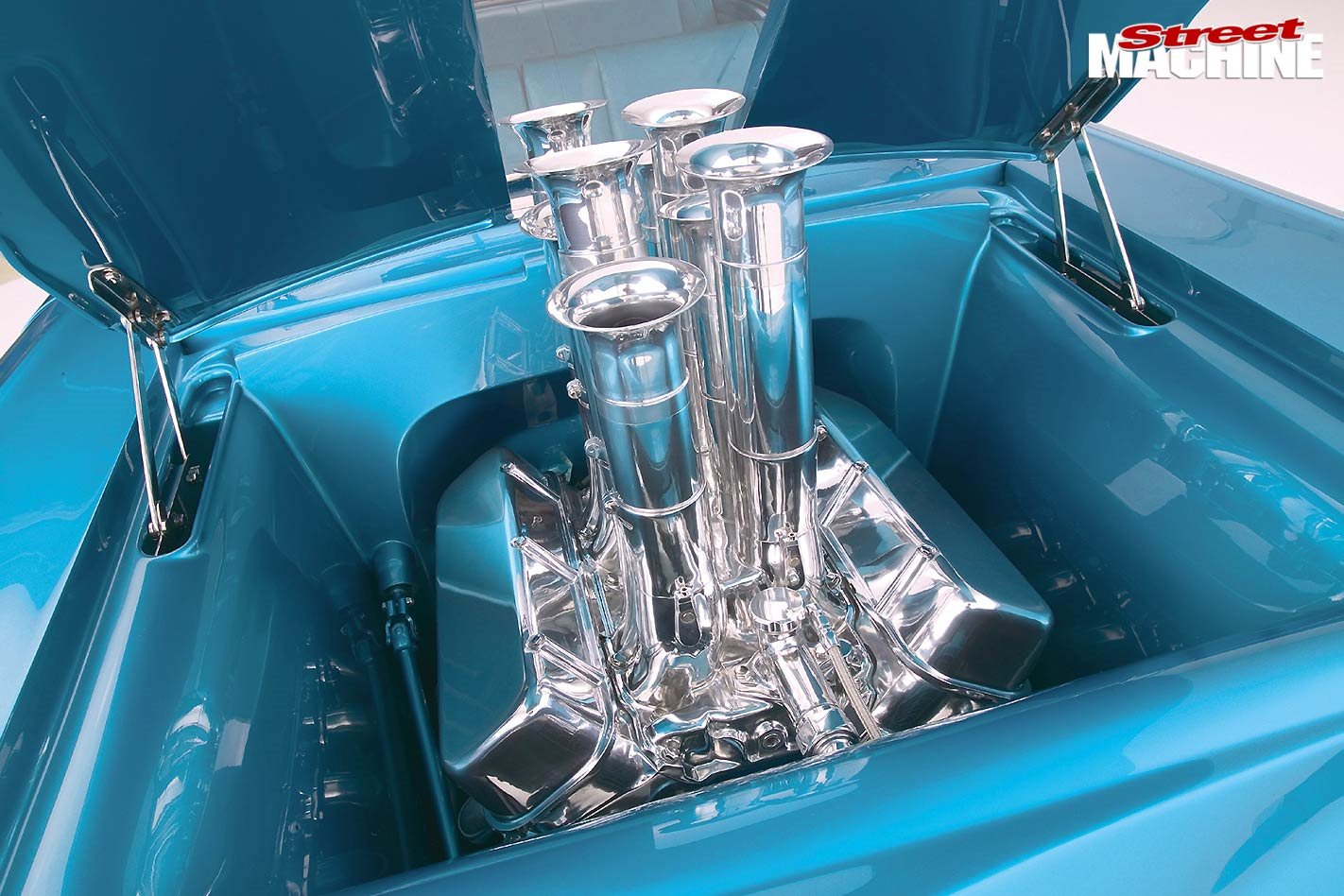 See any injection here? You’d have a good eye if you did as it’s been masterfully hidden away

The engine bay is a study in car creator art. The underside of the bonnet has been smoothed, the alloy radiator and its fan banished behind a finely-crafted shroud that is canted back toward the engine.

Check out the way each bonnet hinge lifts from crafted recesses in the inner guards, just forward of the flat firewall. And the mighty 680hp engine is stunning, with its polished, staggered intake trumpets, and hidden EFI. Everything is there for a reason. Everything works. There’s more work in this engine bay than in many other cars’ bodies, and that’s just what you can see – it’s as beautiful underneath as it is above. 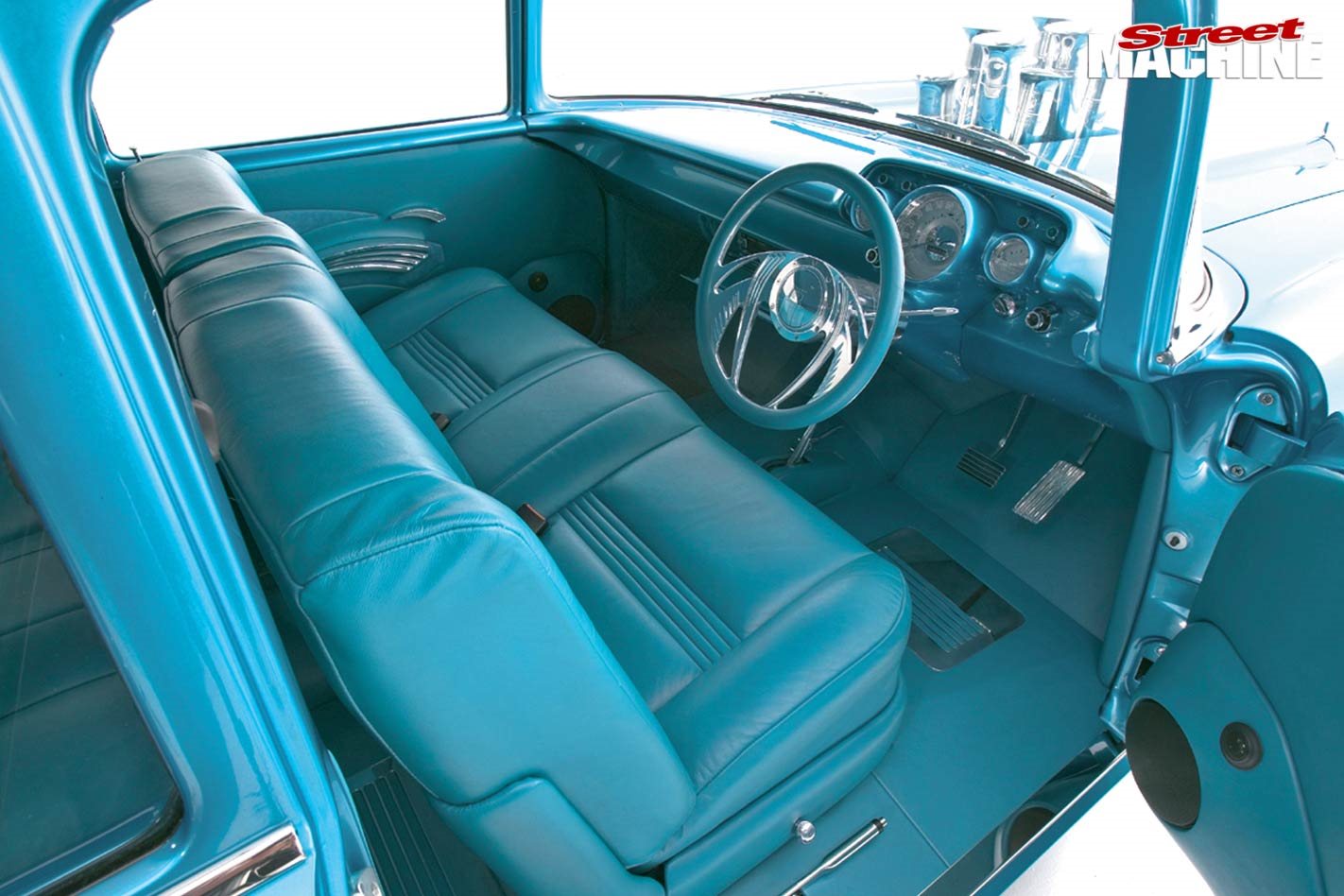 The flowing design theme flows from wheels to door handles and the trumpets scream “Tough!”

The interior is also a beautiful blend of then and now. There are no clashes of theme with this car. Everything is harmonious, tight and restrained.

Anthony bought the car five years ago as an undercoated cruiser with mags.

“The bloke who owned it got hooked up with some sheila and had to sell the car,” he says. “I saw it in the Trading Post. I always said I wanted a Chev. It was just supposed to be a nice cruiser; a nice Sunday car. I started doing it and found I just couldn’t cut any corners.”

Very little rust or damage was revealed after Mr Clean at Padstow blasted the car, so with the body bare, the build started in earnest, with Paul Bennett commissioned to wave his magic metal wand, beginning with that engine bay. 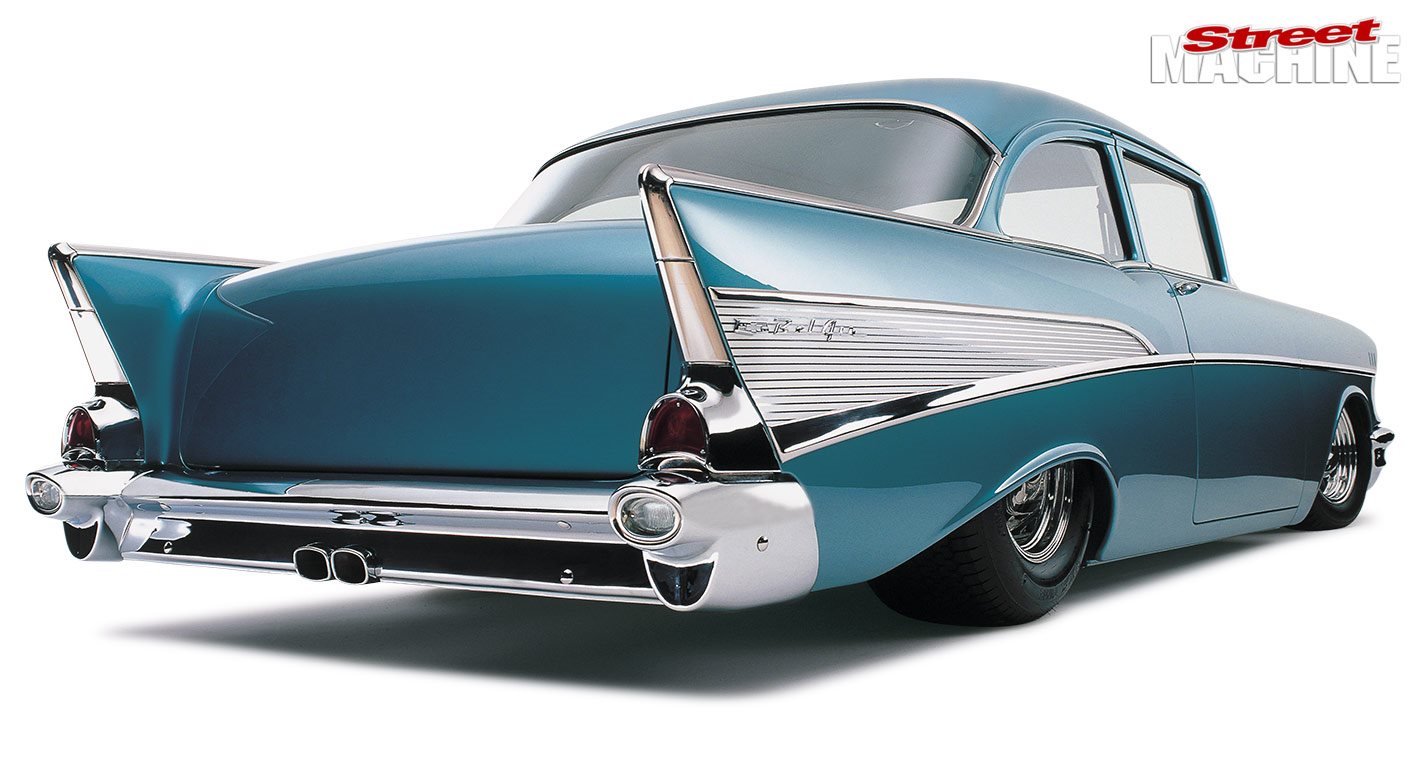 “The engine bay was tinned and I figured while we were there we’d tin the boot as well,” Anthony says. “Then we looked at the underside of the bonnet.”

Bennett also book-ended the chassis with a HQ Holden crossmember graft and C-sections for rear axle clearance. The HQ transplant gives better suspension, V8-compatible discs and a wide choice of handling and rolling stock options. It also drops the ride height by a couple of inches before lowered springs or bags go in. Bennett built the rear suspension to hold a polished alloy nine-inch with Commodore brakes. 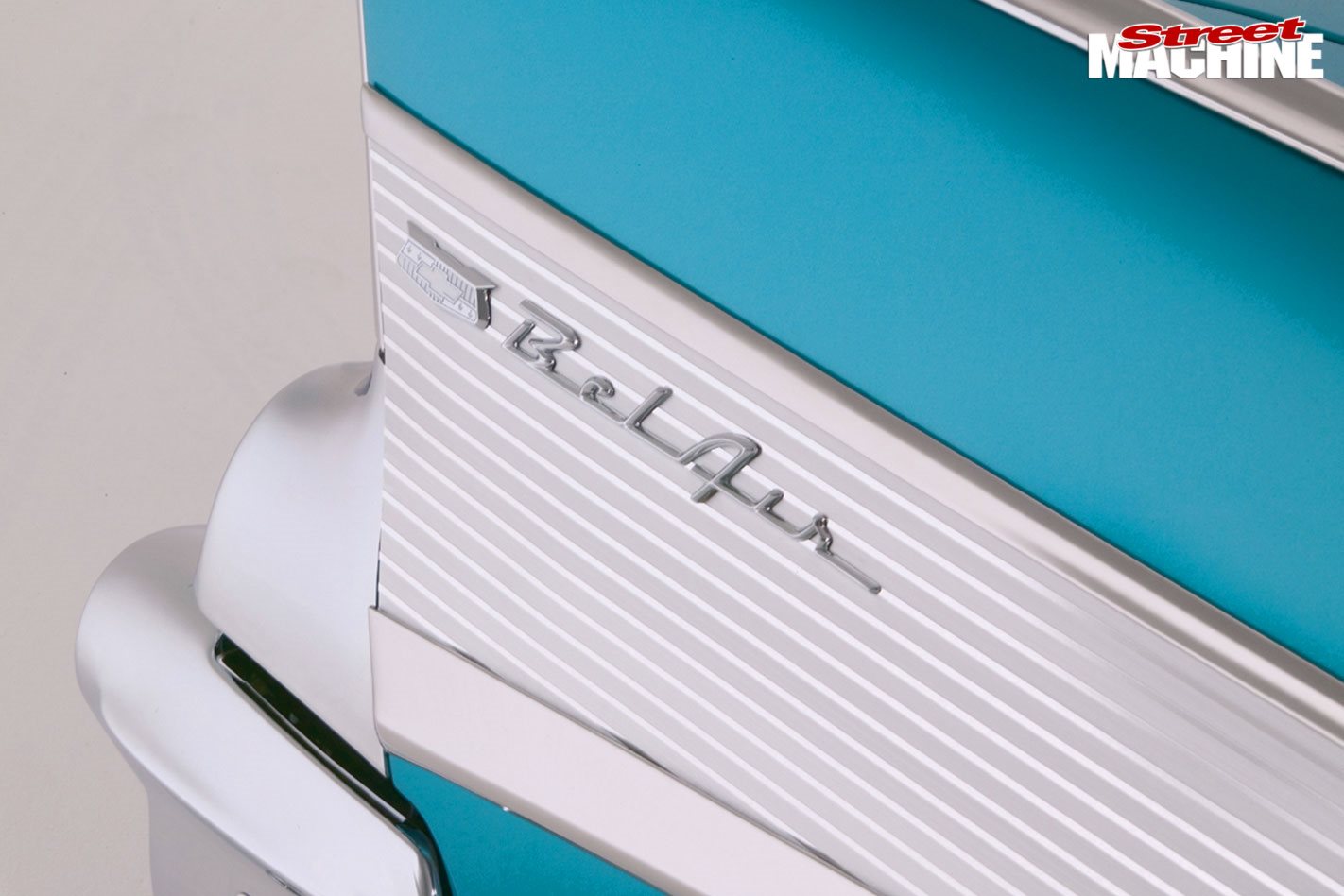 From blasting to painting, the body took two and a half years of on-and-off work. John Fenato and Andrew Coon finessed the panels before Bonnyrigg Smash made it look great with Spies Hecker colour from Anthony’s Holden Rodeo work truck. He considered several other colours, even test painting one side of the car purple, before coming back to his initial choice. “Sometimes your first thoughts are the best,” he says.

Steve from All Trim built the interior. “We did the back seat three times, just trying to get it right. We had a big lounge chair look at first, but that didn’t suit. It needed to be sleek, but keeping a bit of classic. And no wrinkles.” You’d have to agree, they nailed it. 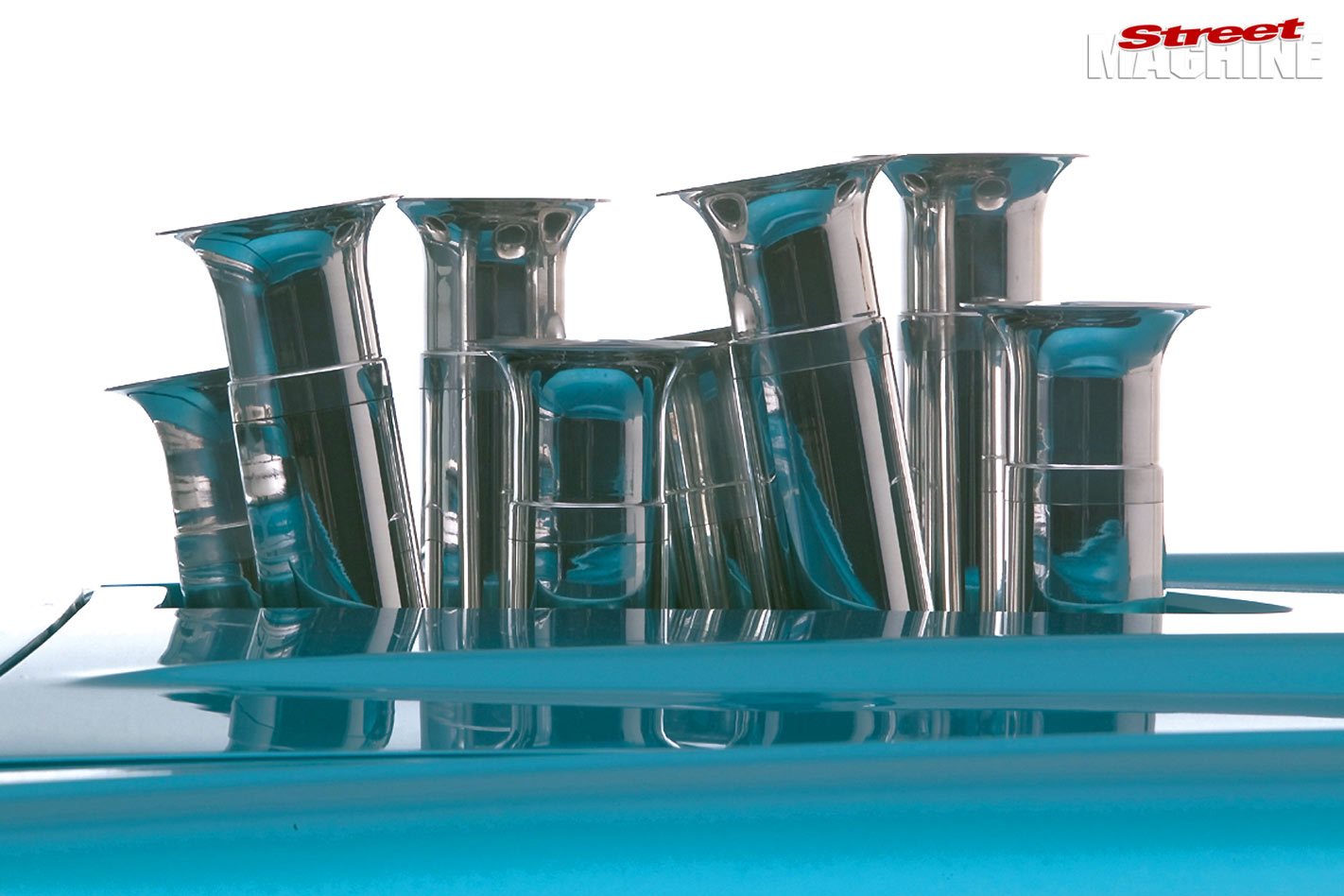 A nice touch you won’t notice until you jump in and try to close the door is the finger holes under each billet armrest (CNC machined by Joe Schembri) to allow you to grab the doors. Neat. The metal polishing, inside and out, was the responsibility of Mirror Finish.

Anthony’s brother Paul of Pro Flo Performance built the Dart-based 496 big-block. “You can’t have a good-looking car that can’t back it up,” Anthony says. “I wanted a big-block, I wanted a hole in the bonnet and I wanted it to look tough.” 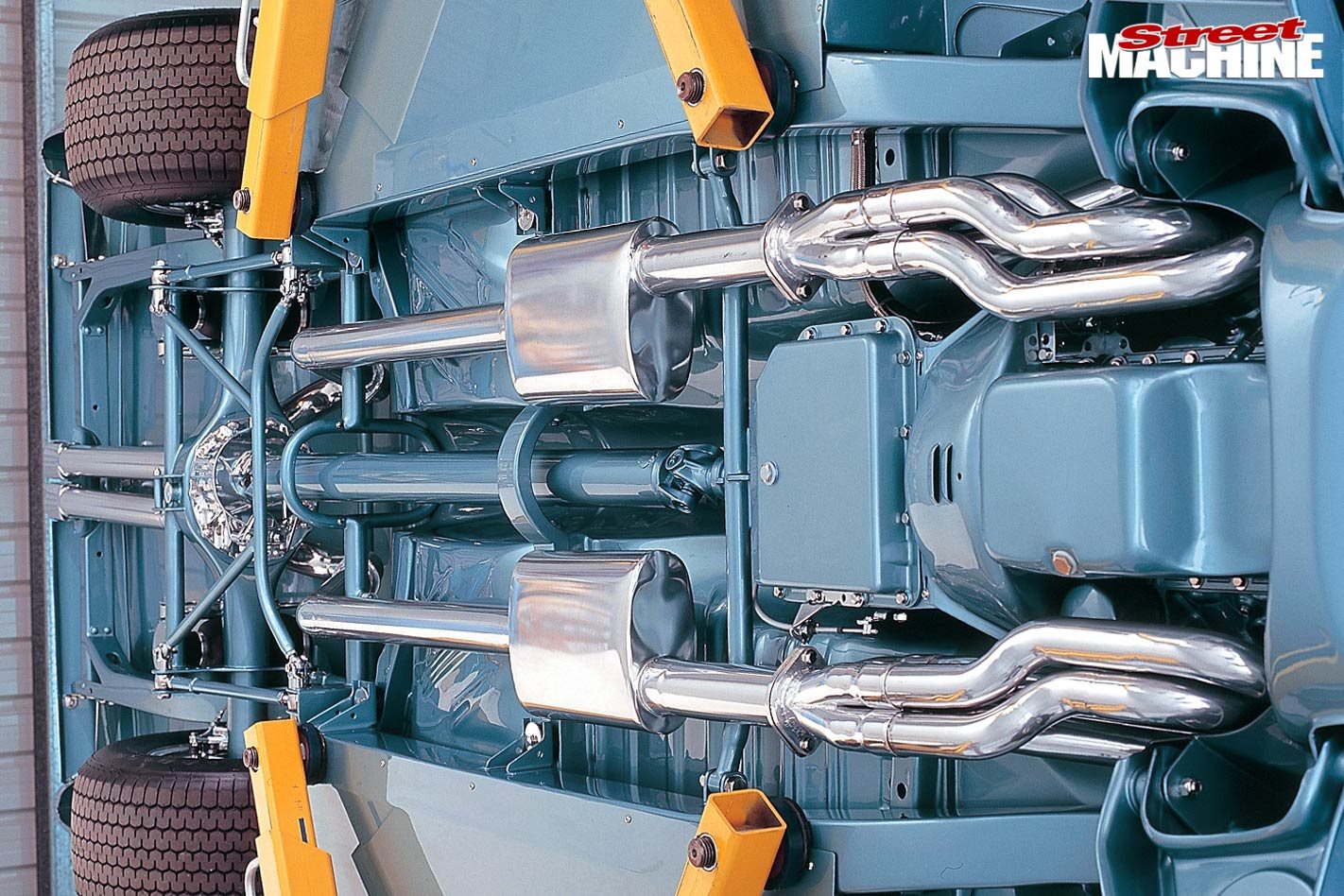 The most outstanding feature of the engine is the hidden EFI. The fuel rails and injectors live underneath the Crower injection manifold, within the valley of the engine. This required a sealed box be built, to keep the fuel components out of the oil, and bench-tested before installation. The innovation is inspiring. Behind the engine is a Northmead Auto Centre TH350 three-speed slushy.

The guts of the airbag system and the custom fuel tank fill both rear quarters. The tank was built by Anthony’s other brother Mark (On-Track Electrical), who added to his sparky credentials by doing an alloy welding course. Of course, he also wired the car. 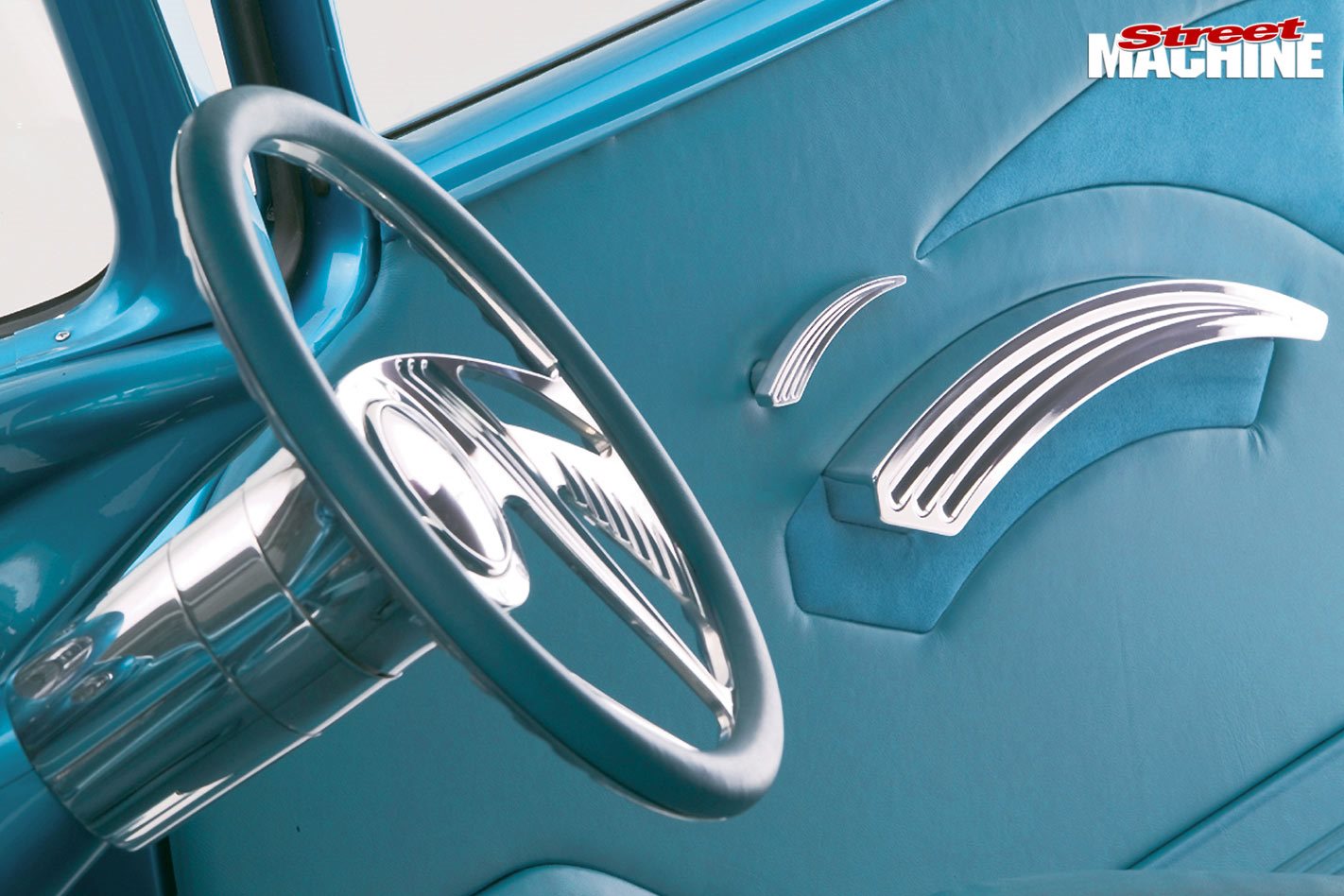 The car was finished the day before Summernats and loaded into its trailer at 2am on Thursday before being hauled to Canberra for the first of Street Machine’s two photo shoots. Then it was off to stun the judges. The only points the Summernats team made to Anthony about his car were some very minute paint imperfections only noticeable to a highly-trained eye. However, Anthony says he welcomes such a discerning judging process.

“You almost can’t pick it, but they do,” he says. “When the standard is as high as it is, the judges have to really pick the little things. They went over it three or four times and kept coming back to it. It must’ve been a hard decision between this and a couple of others. Other people sometimes arc up about feedback such as that. You’ve got to listen to the judges and learn, I reckon,” he says. 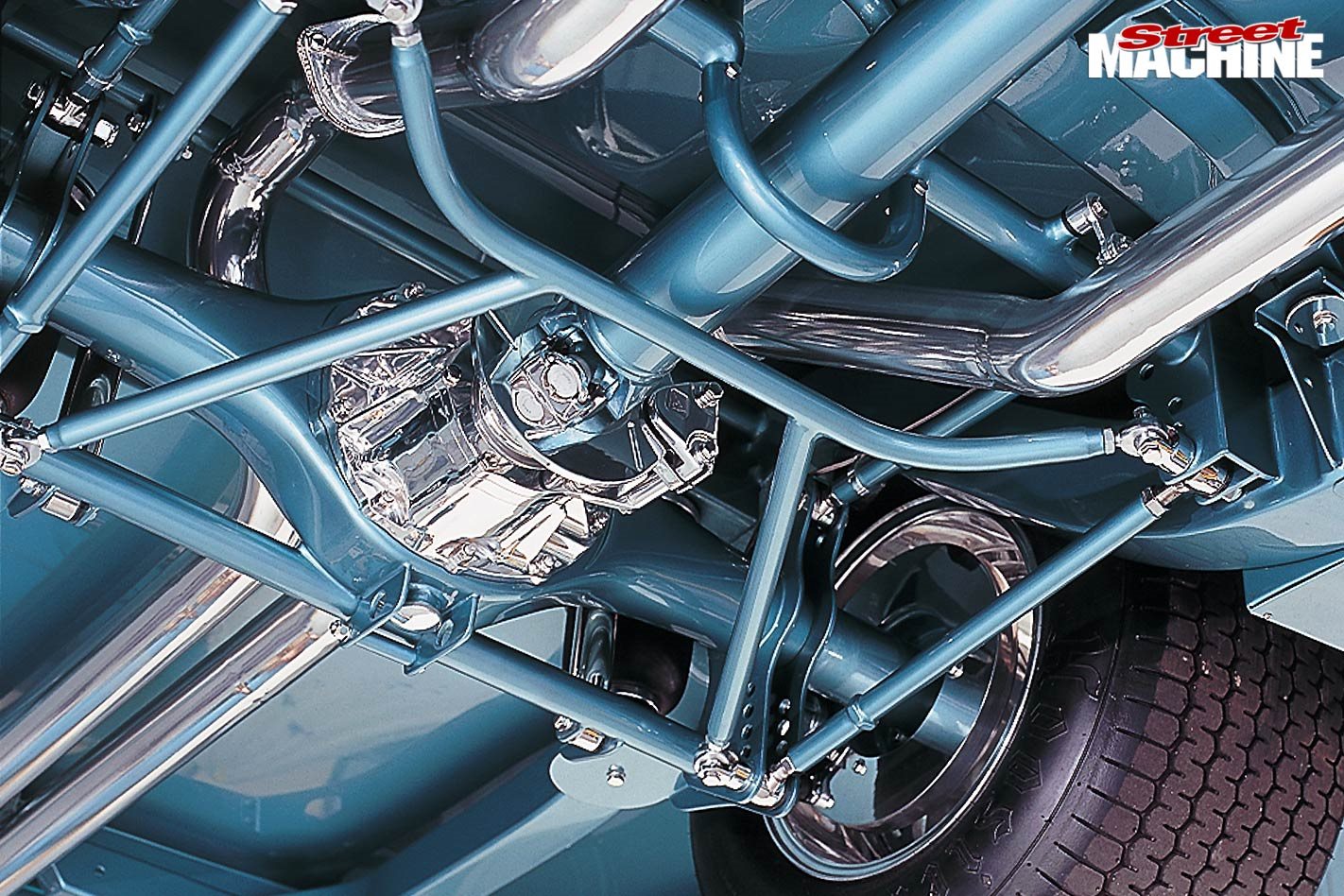 Sage words from a hot elite car newcomer who has nailed the ideal of restoring a glorious classic with the right blend of modification.

YEAR OF THE CUSTOM 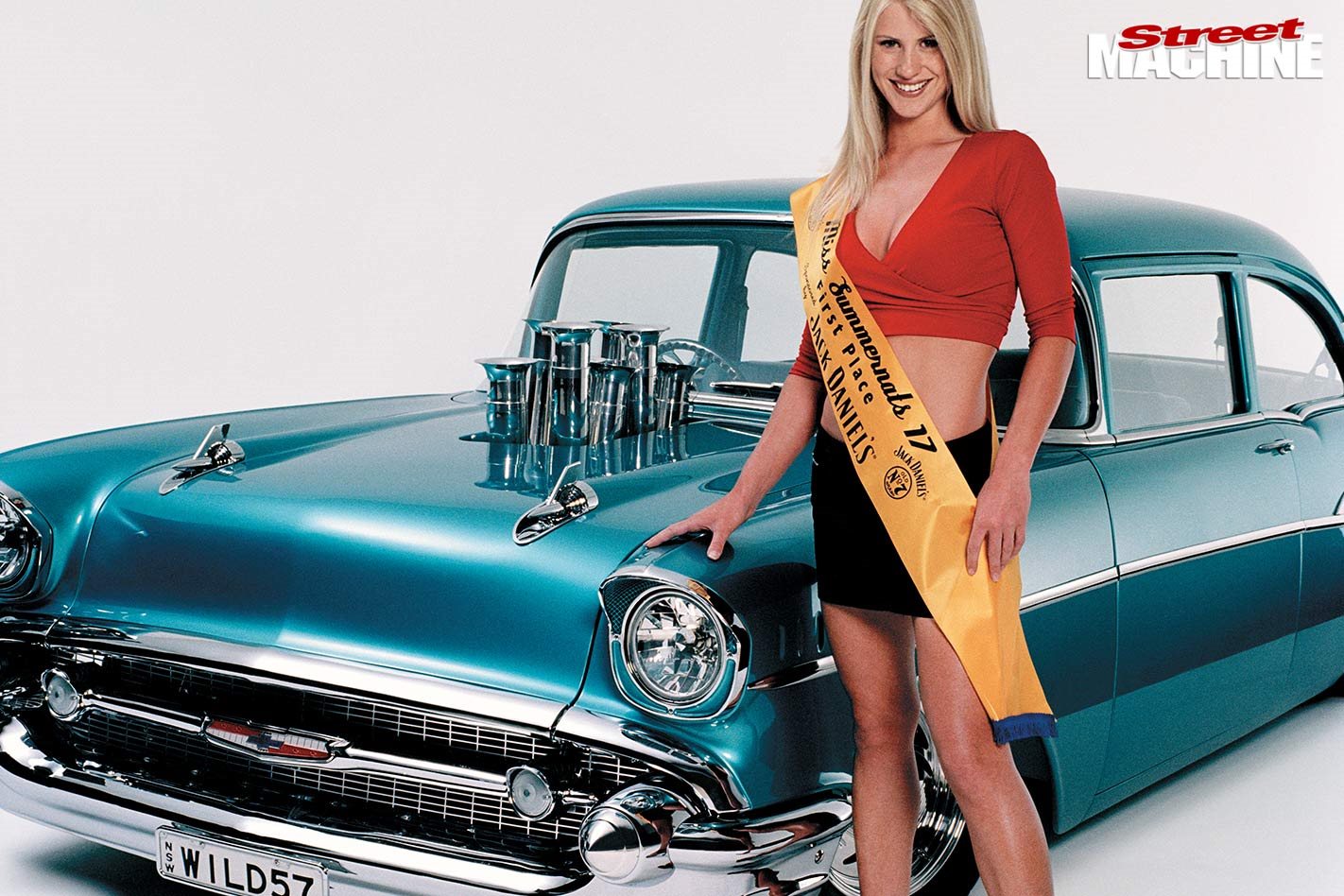 That’s all very good, but the man on the street often sums it up best. A bloke standing next to the Chev as it shone in the Elite Hall was heard to say, “This is the best f#$%ing thing in here!”