JAMES Melmoth from Melway Competition Engines (MCE) has had a long love affair with the Holden V8; he even used to work at the Holden engine plant at Fishermans Bend. Nowadays he puts together some of the toughest street ’n’ strip Holden V8s around.

“I was a fitter/machinist and CNC programmer at Holden back in the day, and I even saw the last Holden V8 go down the line,” James says. “It was a pretty big deal at the time; Larry Perkins and Craig Lowndes were there as well.

“The thing I love about building Holden V8s is they will make real horsepower. Horsepower-for-horsepower, the Holden V8 will run quicker than an LS1. There’s plenty of guys with LS- or Ford-powered cars making 750hp that aren’t even running nines, but look at Todd Foley’s Commodore, it’s making 620hp on E85 and running high nines.”

James has built plenty of tough Holdens, and with his own Superflow SF-902 dyno he’s got a pretty clear idea of what works and what doesn’t. He’s just put the finishing touches on this 710hp Holden stroker.

“With this engine I didn’t go with a 383ci combo; I don’t like the rod/stroke ratio for a high-revving motor.” Using a Crankshaft Rebuilders crank, Callies rods and custom JE pistons, James came up with a 367ci combo that makes 1.93hp/ci. Serious stuff! 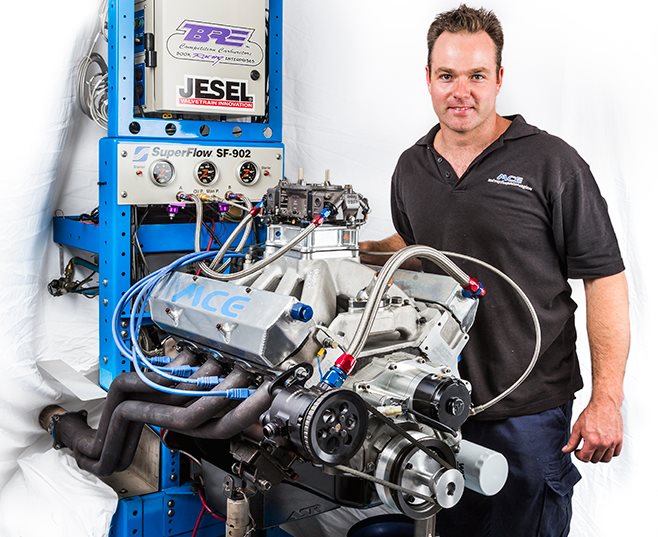 “I love building Holden V8s because you can’t just buy the technology out of the US, you’ve got to do the hard yards yourself,” James says. He also reckons the block is nothing special, just a standard VN-VS block that he’s had converted to four-bolt mains

“One thing that’s absolutely critical is oil control,” James asserts. “There’s quite a few little tricks I use to stop all the oil pumping into the rocker covers and starving the crank, but the pump itself is nothing special, it’s just a standard JP pump.”

As you’d expect, it’s an all Aussie affair up top, with Yella Terra –9 heads that have been CNC-ported to MCE’s own specifications, and there’s a Torque Power single-plane up top with a 950 Holley.

“Craig Bennett’s intakes are great,” James says. “He’s done so much development and he makes a good product. They are A-class!”

But if you’re thinking about one of these combos for your daily-driven streeter, think again.

“It’s not really a street engine with 14:1 comp. This one is going into an LJ Torana and it’ll probably run around 9.1 on the quarter,” James says. “For a car that’s going to get driven I’d recommend something like Todd’s engine. He can drive that from Geelong to Calder or Heathcote, run high nines and then drive it home. For something like that you’re probably looking at around $20K.”