This article about Shane and his VJ Valiant was originally published in the March 2011 issue of Street Machine.

Being a second-generation drag racer sure has its advantages; a father who encourages and educates you as you grow up around cars, and at the dragstrip a readily available knowledge-base so that you don’t have to make the same mistakes your old man did. And, best of all, a collection of parts accumulated through 30 years of mucking around with cars.

That’s the happy position Shane Catalano’s in. Thanks to his father, Lindsay, who races a Charger in Supercharged Outlaws and has years of experience and a mountainous parts pile, Shane has got this VJ Valiant ute running well into the eights with a soft tune and a swag of hand-me-down parts.

“The box is a 727 TorqueFlite that was built by AB Engines many years ago; it’s the third car we’ve had it in. The converter is stock but tickled up to 2500rpm stall by Fremantle Torque Converter Service and was built for the previous small-block engine but it’s holding up so far. This is the third car the wheels have been on too, and it’s the second car the diff has been in,” Shane says. 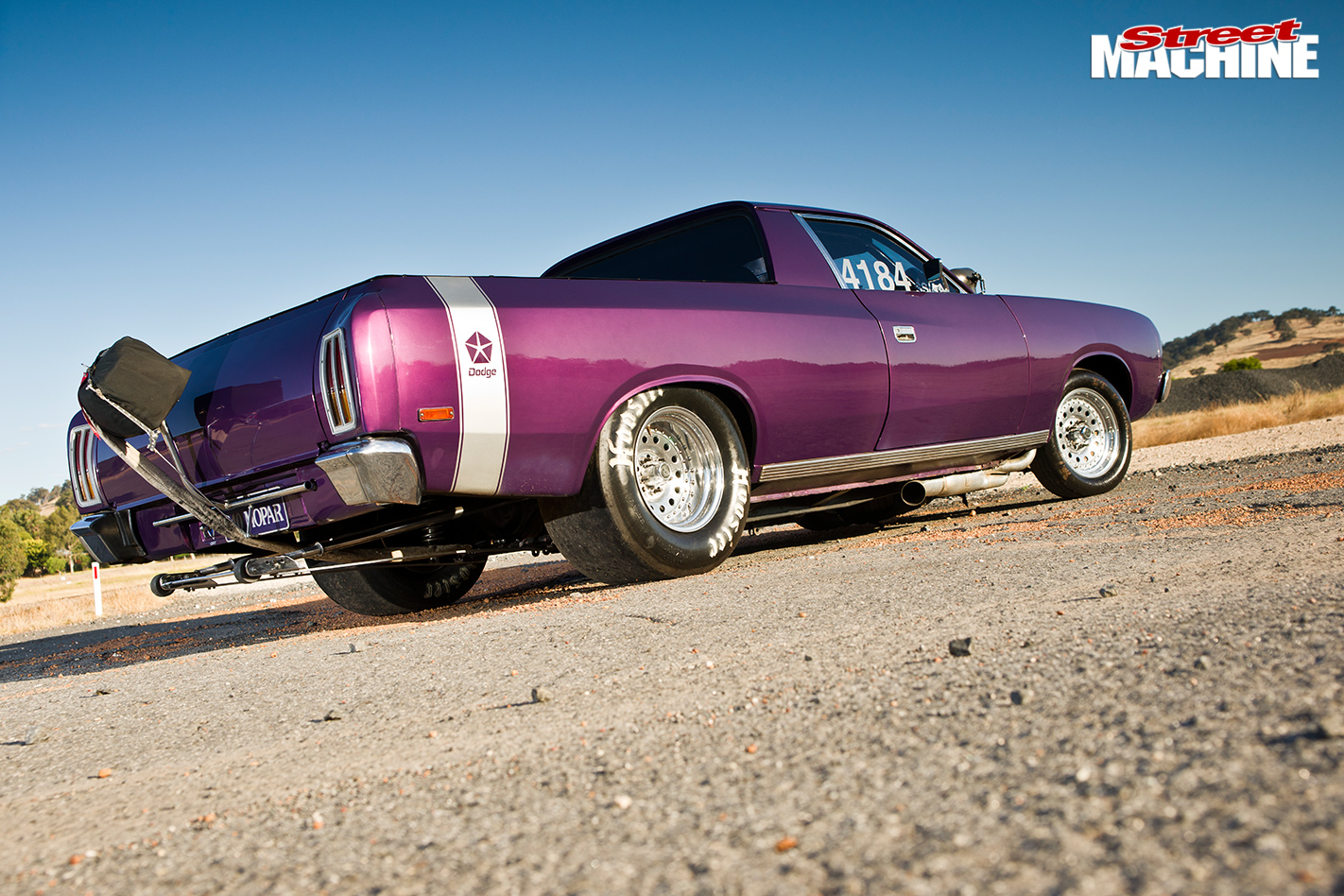 It’s pretty tough to take what is basically a street car and get it running faster than 150mph on the quarter but it’s been a slow and steady progression. Originally built by Col Palmer (SM, Jun ’04), Shane spotted the car at Kwinana Motorplex.

“It was straight and a reasonable job had been done on it, which is unusual for Valiant owners. I always wanted a Valiant ute for a daily driver. A few months later I saw it racing and introduced myself to Col. Being Mopar men, we became great mates.”

About 18 months later the ute came up for sale and it was too cheap to pass up. Initial plans were to fit the tunnel-rammed 440 out of a Charger Shane was racing in Super Street. “That engine had run a best of 9.50 at 141mph but on the last pass the engine was to do in the Charger it collapsed a bore and kicked a rod out.” 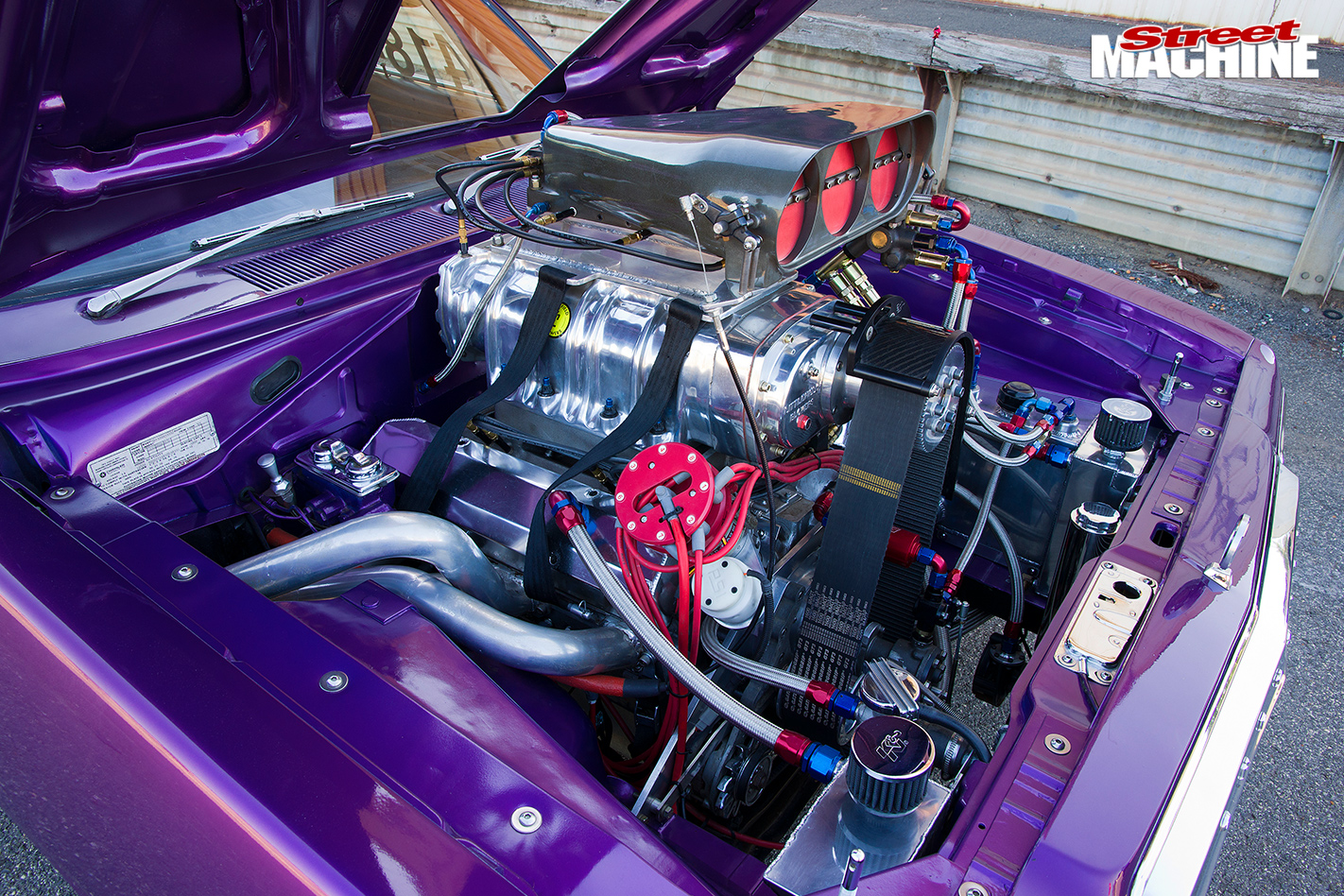 Seeing as the ute was already set up for a small-block and Shane just happened to have a 360 handy, he built up a mild single four-barrel combo from gear kicking around the shed. “It ran a 12.47@110mph and I was driving it around a lot, even the 50km round trip to work a few times,” he says. Then one wintery Sunday afternoon Shane and his dad got to drinking — and thinking.

“Dad said to me: ‘If you find a blower, I’ll buy you a manifold.’ Two weeks later I’d picked up a Detroit 6/71 for $200. I fitted Newby end plates, a Littlefield snout and the carbies off my Charger. It ended up running 11.18 at 121mph and I was still cruising in it a lot. “Then I had a brainwave and fitted the nitrous system off my Charger — because it launched a bit soft — and gave it a 50hp shot. The first pass with the gas it collapsed a bore and kicked a rod out.”

What can you say? That’s drag racing. 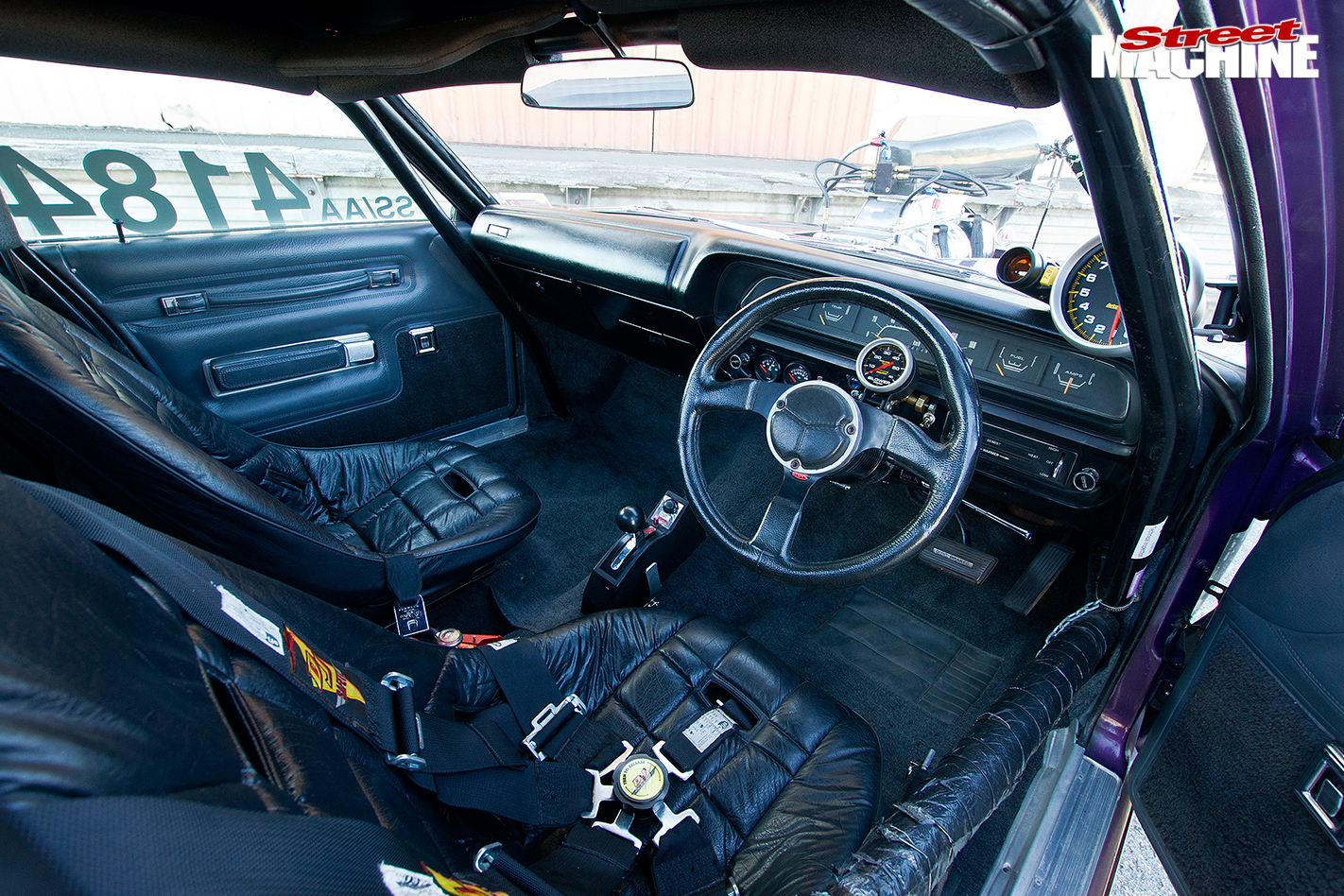 With no more small-block gear to hand but 30 years spent accumulating big-block parts, the choice was practically made for them — a 440 it would be. “The only major components I had to buy were the blower manifold, fuel pump and pistons; the rest we had in the shed. I bought the Indy heads when I was 18, before I even had a race car, and it was 11 years before I could use them.” The 14/71 blower and hat are off Lindsay’s Outlaw Charger.

While the car was still running the 360, it also broke an axle. “The cheapest way to fix it was to fit the diff and ladder bar back-end out of my Charger,” Shane says. But as usual when you change something, there was a domino effect: “As the diff was narrower, the tyres hit the inner guards but it was cheaper and better to tub it than buy new wheels.” Of course.

After the 440 went in, Shane fitted QA1 coil-overs and a sway bar and the car now launches straight and true. 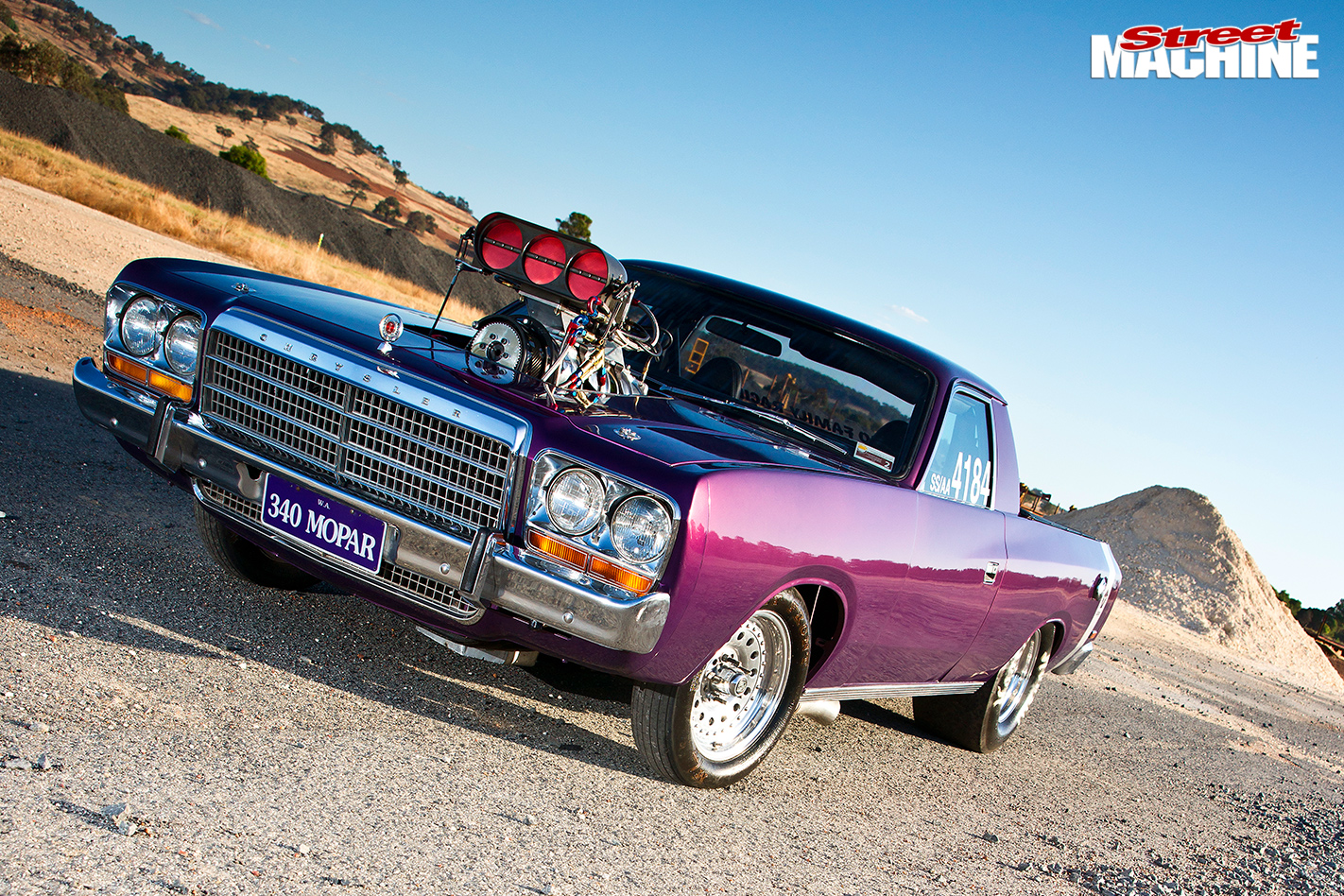 While a lot has happened under the bonnet, the rest of the car has stayed pretty much how Col Palmer built it. The same Wild Violet paint graces the panels, with a white bumblebee stripe breaking up the acreage of the rear quarter panels. That front end ain’t no poverty pack Valiant either. Yes, we know it’s not even from a VJ but you’ve probably figured out by now that Shane isn’t exactly a restorer.

A CM Chrysler SE gave up its front clip so that Shane could look classy going down the quarter mile. It also gave up its electric windows, flash door panels and plush carpeting; why not have a bit of luxury as well? Apart from that it’s all business, with RCI race seats, DJ Safety harness, Auto Meter monster tacho, a bunch of VDO gauges and a six-point ’cage that will soon need to be upgraded to suit Shane’s future racing intentions.

If you’re wondering, no, the speedo doesn’t work — Shane doesn’t want to know how fast he’s going, though he has plans to go faster. 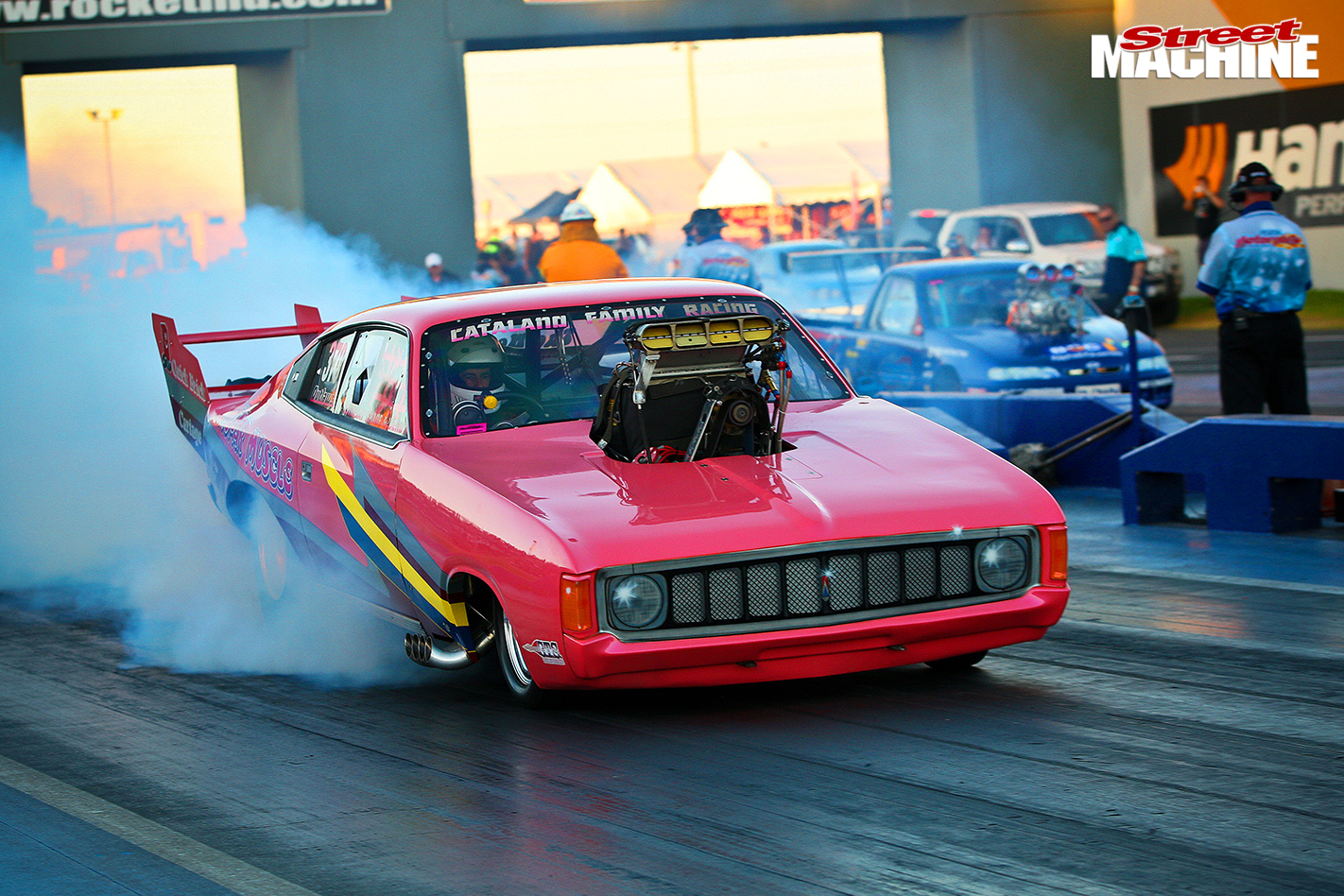 If you're going to paint a car pink you better bloody well make sure it can go fast — and that’s exactly what the Catalano family has done. Lindsay, Shane’s dad, has been campaigning this pink beast for years, slowly but surely stepping it up until it can now officially be called the fastest Valiant Charger in the world, with a 6.45@217mph pass. That’s bordering on Doorslammer territory!

Those plans include fitting 31x13 slicks, a coil-over or strut front-end and rack and pinion steering, and eventually a Hemi to get it into the sevens. However, there’s a 1953 Studebaker that he’s currently trying to finish too, to get himself some low six-second timeslips. There’s no mention whether any of the cars will be going up for sale, but Shane’s available.

“If there’s a woman out there who could put up with the time and money I put into my cars and racing, I’d like to meet her!”