ELVIO Gonzalez has a history with fast Capris. His old white beast LVO351 went through a succession of small-block Ford engines before stepping up to some big-block Ford muscle and high eight-second quarters. However, that kind of performance doesn’t come easy or cheap, so when Elvio was looking to step up even further he figured boost was the way to go. “Originally I was going to do a twin-turbo Holden V8, because I was building a lot of Holden engines at the time,” he says. “But then I started doing LS engines and I was blown away by the power they were making. I love the LS engine; you can’t go past them.” 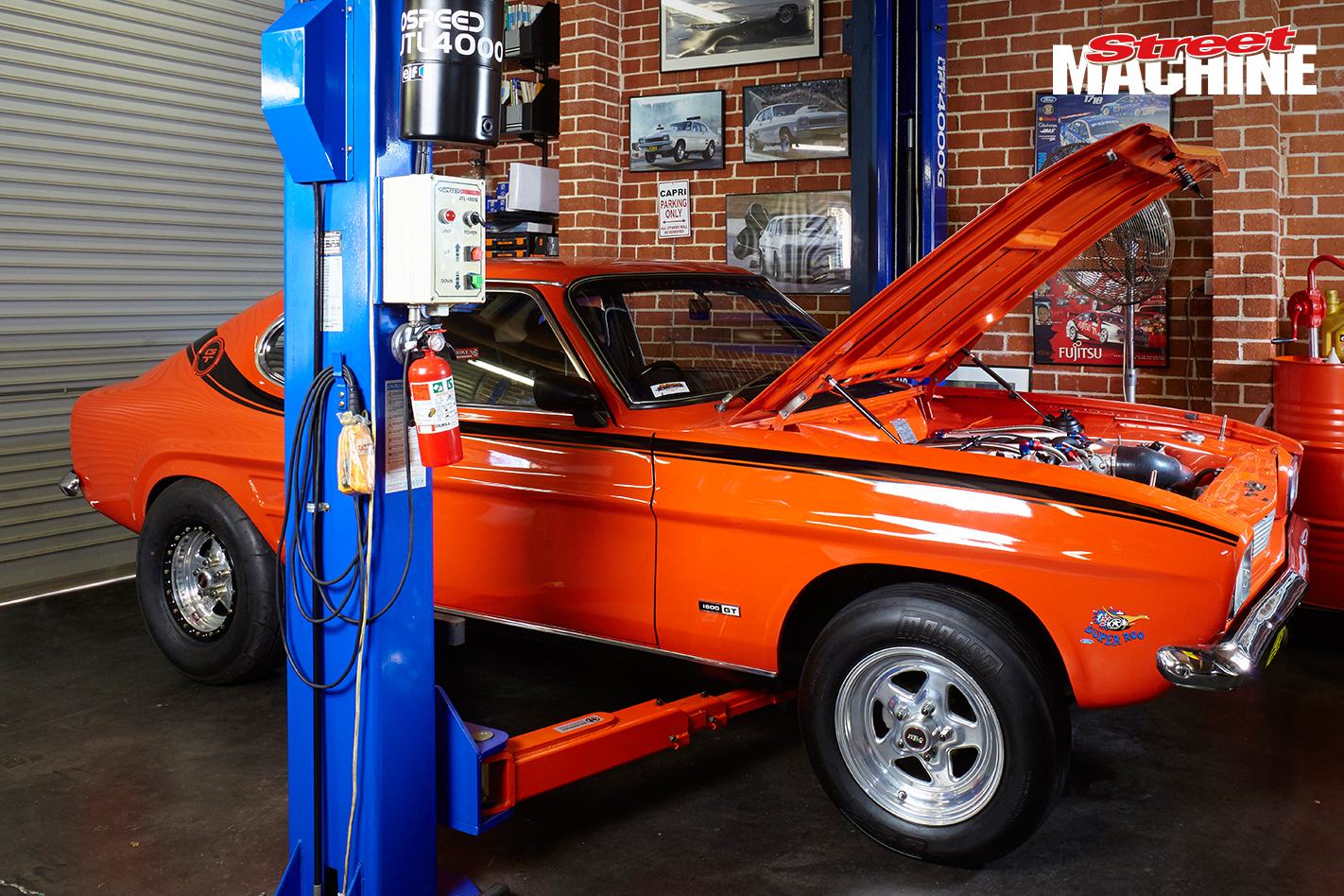 Elvio started off with a stock-ish six-litre in his Capri with an eBay turbo bolted in the boot. The engine wasn’t anything special; just a cast-iron job with a stock crank, rods and pistons and a small custom turbo cam. Naturally he swapped out the valve springs and fitted a Holley throttlebody, but the engine wasn’t a fire-breather by any standards. Even so, with a $500 Chinese turbo the Capri ran 8.57@157mph. 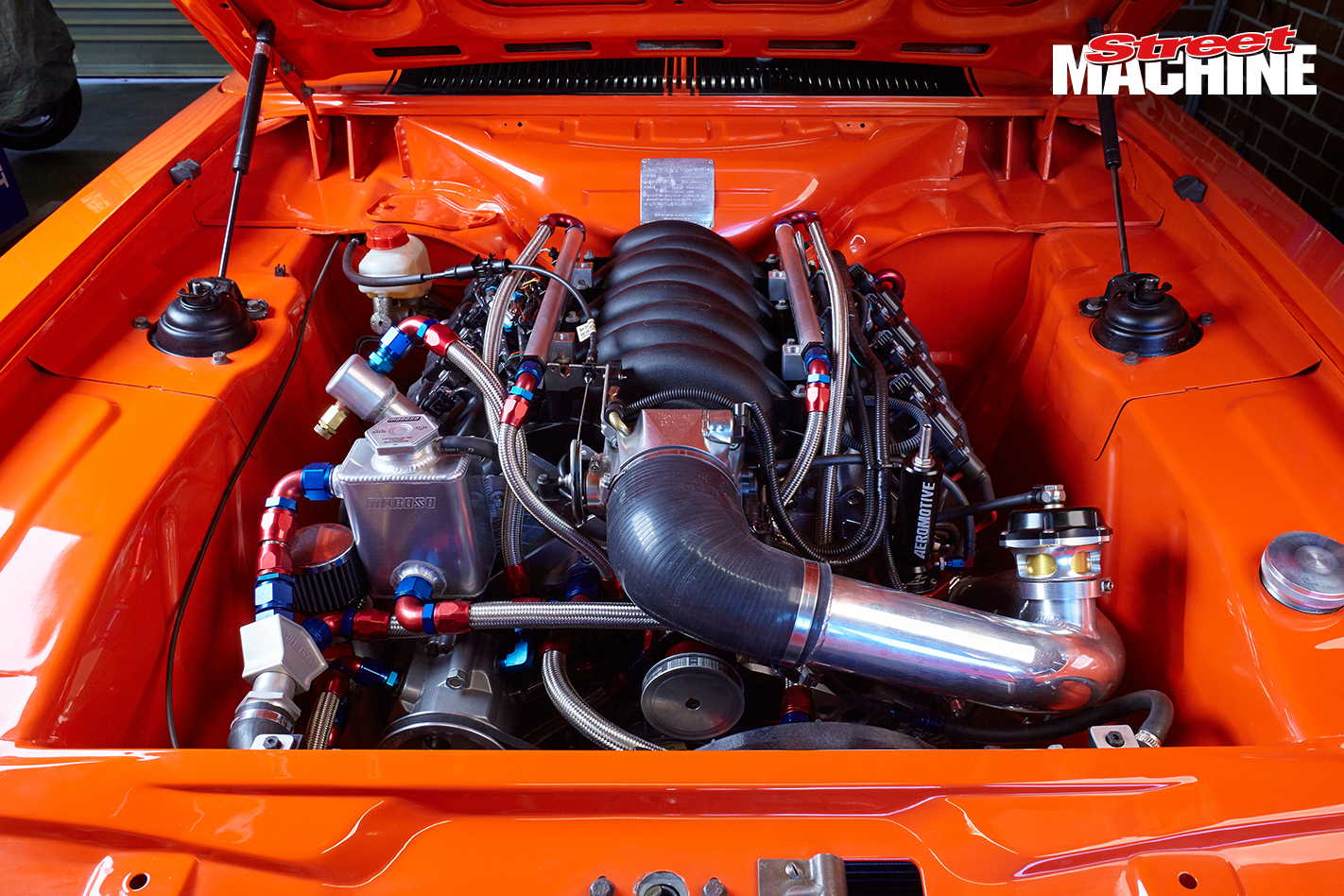 “We ended up killing the engine, but the beauty of these things is that they’re cheap and everywhere,” Elvio says. “I just built a 445ci twin-turbo Windsor for a customer and that was a $40,000 engine, whereas I can go to GM and buy one of these 376ci B15 LSX crate motors for around $14,000, and know it’ll make over 1000hp and stay together.” 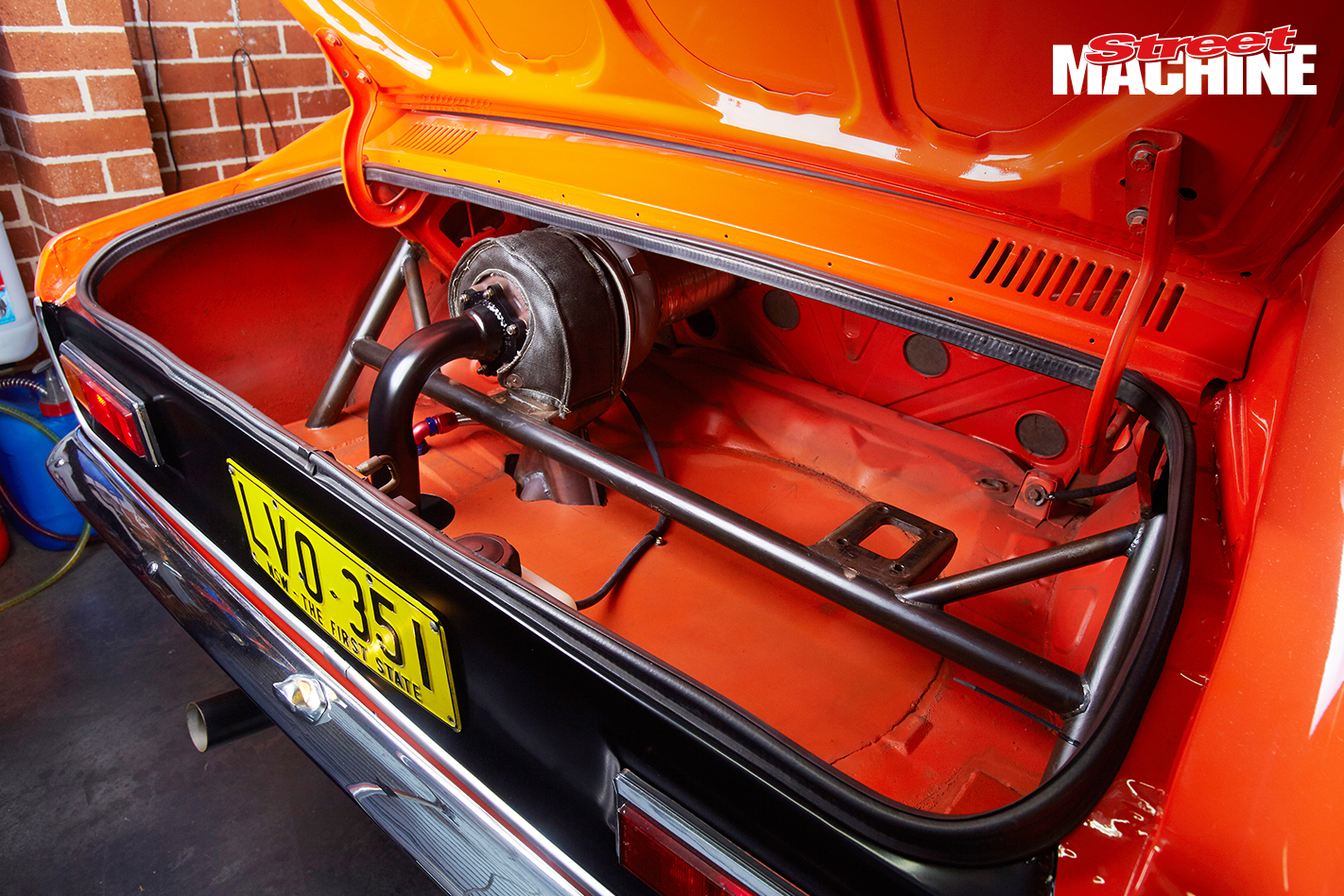 Elvio is a big fan of the LSX B15 engine – so named because GM guarantees that it’ll handle 15 pounds of boost with ease (they also make a B8 version). The GM Performance engine comes with six-bolt LSX-LS3 heads with 260cc intake runners, dished 9:1-compression forged pistons, a 4340 steel crank and the same rods you’ll find in GM’s supercharged LSA engine. Even though they’ve got beefed-up valve springs, Elvio swaps them out for better units and slots in a hydraulic 235/231 Comp Cams bumpstick, well-suited to a rear-mounted turbo set-up. He also shaves 50thou off the heads to bump the compression up; he feels that 9:1 is too low, and prefers around 10.2:1 comp. 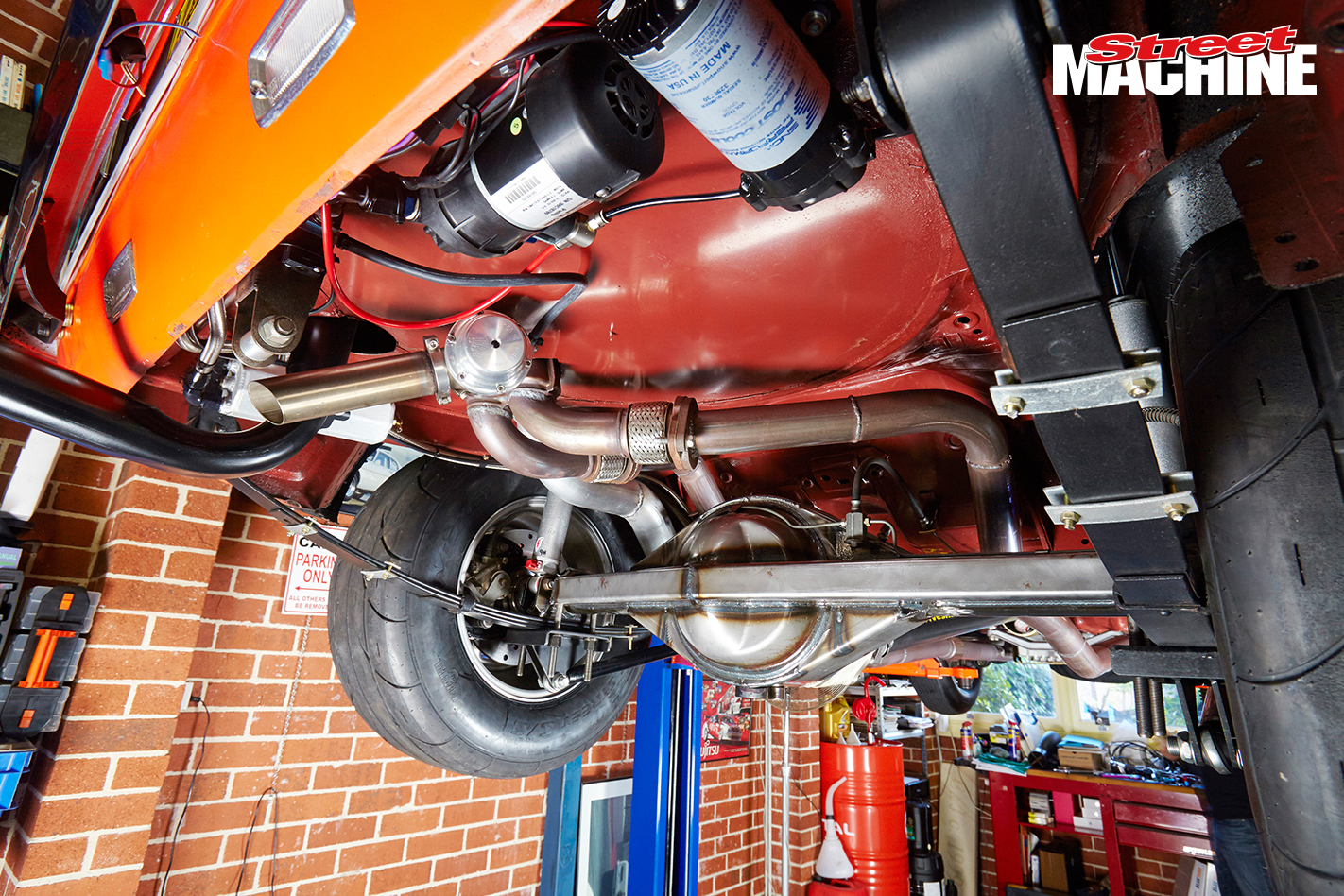 He’s already had some success with the new set-up, running 8.39@150mph with an off-the-shelf Garrett GT45 and running out of revs in the top end. A change from 3.7 gears to a more turbo-friendly 3.25 ratio will allow the Capri to reach its full potential. 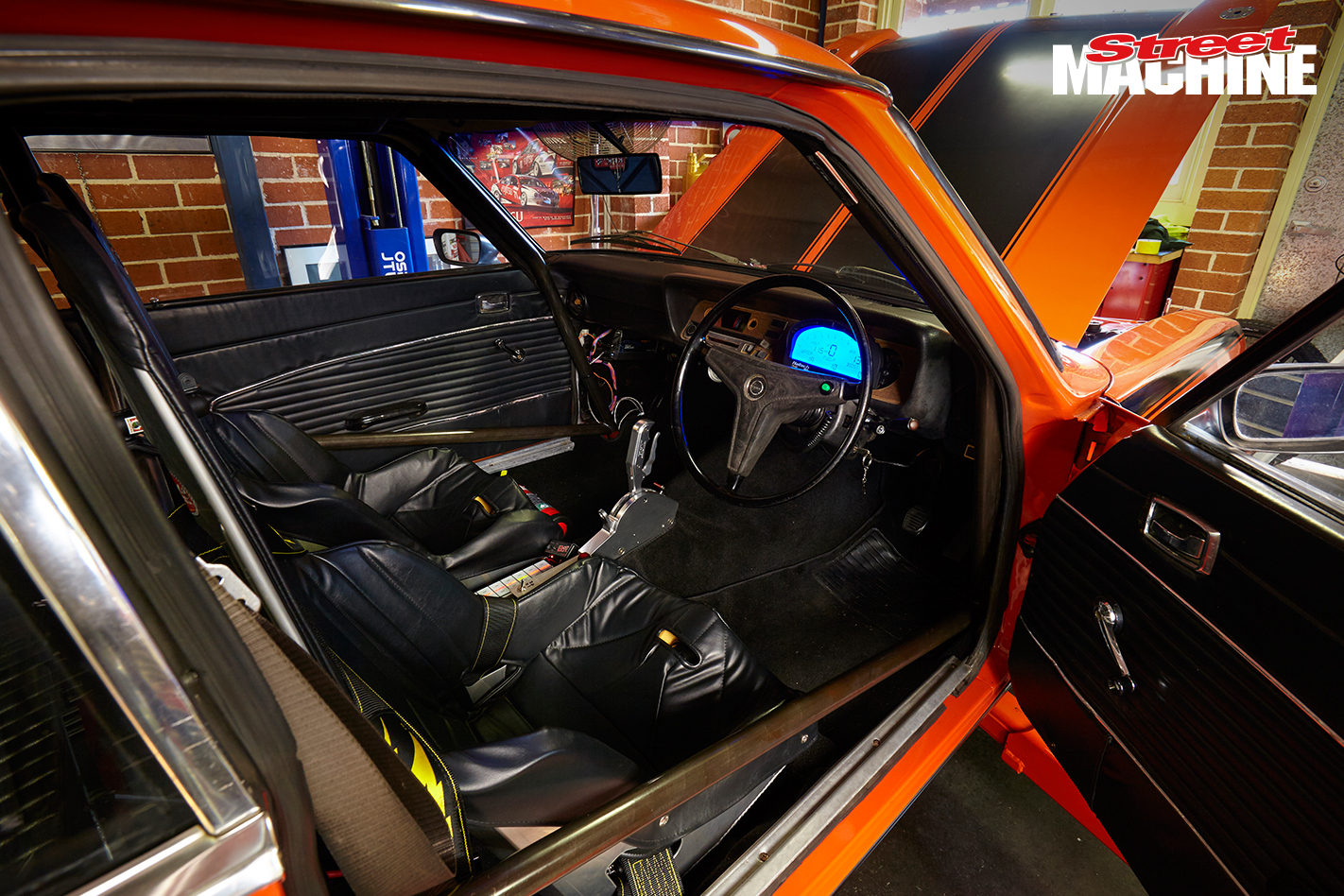 For Drag Challenge, Elvio is getting a new custom trailer built and he’s already had a new trailer hitch fitted to the Capri by Peter Cleary from Pro Racing. While the car was at Peter’s, Elvio got him to install a new Gazzard Bros split mono-leaf spring set-up as well, which he reckons should help him in the hunt for seven-second timeslips. “I haven’t been able to leave the line hard yet. Up until now we’ve just had factory springs, CalTracs and $100 shocks,” Elvio says. “We just need a better 60-foot time. The Gazzard Bros rear end should be a whole new ball game – it’s exciting! I’ve picked up 100hp at the wheels going from E85 to methanol, so the plan for Drag Challenge is to run in the Haltech Radial Blown class on pump fuel for the drive, and then methanol for racing.”

Elvio is also looking to raise money for the Cerebral Palsy Alliance during his Drag Challenge journey, so keep an eye out for the Capri if you would like to help raise a few bucks for kids in need.