These days people cringe when Troy Vugs tells them he paid just $4200 for this genuine 1970 Holden HG GTS Monaro.

But that was 21 years ago, and those were different days. In the 90s, if you were to suggest that pristine examples of these cars would one day command prices north of $300,000 at auction, you’d have been carted off in a straitjacket.

Troy was wise to secure his HG GTS before prices got out of hand, and he’s spent the ensuing two-and-a-bit decades cruising, racing and relentlessly wrenching on it. It’s been through a number of rebuilds to get to where it is today, and it’s to be admired for a number of reasons. Firstly, it makes over 800hp and runs in the nines, while still retaining the factory-esque configuration of a naturally aspirated, pump-fuel small-block Chev, teamed with a Powerglide transmission and a leaf-sprung rear end. Think of it as being just as The General prescribed, only hopped up a little bit.

Secondly, this beautifully presented car gets driven most weekends, even though Troy lives on a corrugated, pothole-riddled dirt road. Yep, he gets it filthy-dirty and risks having it peppered with stone chips every time he rolls it out of the shed, but what’s the point of having a nice car if you don’t enjoy it at every available opportunity? 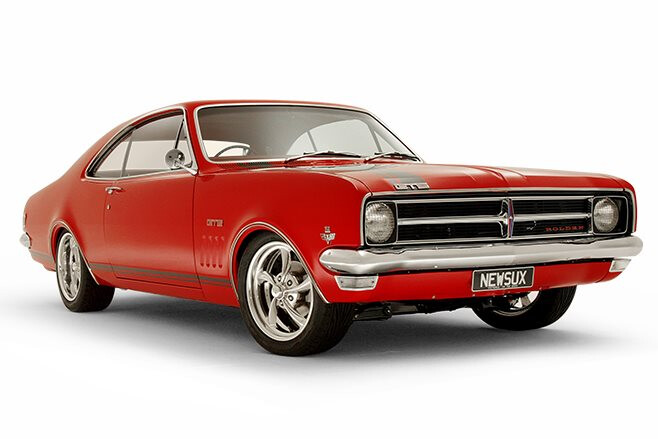 Troy was just a young bloke with a tough 308-powered HQ Prem when he saw the HG’s previous owner drive it into Jefferson Ford in Mentone, Victoria, to trade it in on something newer and flashier.

“She was an elderly lady, and I tried to convince her to sell it to me, but she wouldn’t be in it,” Troy says. “The sales guy ended up taking it home to sell it, and I bought it off him.” After tracking down the old lady’s phone number, Troy gave her a call to find out about the history of the car. It turned out she was the first owner, and it had been a country car its whole life. She mentioned her kids used to take it out shooting; a story Troy was later able to verify when he found spent shotgun shells all through the interior!

Despite this, the car was in reasonable shape, so Troy lifted the 308 and Top Loader from his HQ and transferred them into the Monaro, then gave the shell away! In that configuration, the HG ran as quick as 11.5@122mph.

It was treated to a number of facelifts and freshen-ups over the years, but its most recent rebuild was by far the most serious, taking a total of 10 years to complete. The engine was pulled and the car sat around gathering dust until Troy’s mate Brad Quirke took on the responsibility of bringing the body back up to scratch. It was a job and a half because the shell was riddled with bog and rust, but Brad toiled away most weekends, cutting out rust and welding in new sections for two whole years.

Meanwhile Troy had a fuel-injected, turbocharged 355ci Holden on the go for the car, with the Moe Engines-built beast making an impressive 1060hp on the Adicted Performance dyno. At the last minute, Troy had a change of heart, brought about by his reluctance to slice the car up to fit the plumbing for the turbo system. Luckily a mate with a VR ute took the engine of Troy’s hands, and the funds were tipped into the fierce carby-fed small-block Chev that now powers the car.

“It needed to run on pump fuel and be reliable enough that I could jump in and drive the car anywhere,” Troy says. “Brian from Moe Engines gave me a list of parts I should consider, particularly the CFE heads and tunnel-ram. I emailed CFE directly and they did the manifold and heads to suit my combo, and that was the starting point of the engine.”

Brian then set about piecing together a street-friendly short motor to go underneath the trick CFE top end, starting with a Dart Iron Eagle block. The rotating assembly consists of a Callies Magnum crank, Oliver rods and JE pistons, with displacement arriving at a neat 434ci. A diet of pump fuel meant that compression was limited to 11.5:1, and the camshaft is a solid-roller unit with a stout 272 degrees of duration at 0.050in lift, and total lift described only as ‘big’.

That meant that a sizeable 6300rpm TCE converter was required for the Powerglide trans, but Troy attests that the car is nowhere near as cantankerous to drive on the street as one might expect.

“It behaves perfectly on the street,” he says. “I was a bit hesitant about how it would act with the twin carby set-up, but it’s fantastic, which is a credit to Brian Cassar at Moe Engines and Danko at Adicted Performance, who tunes it. The torque converter is tight, so it doesn’t drive like it has a 6300rpm converter, which helps improve driveability. Everyone who gets in it can’t believe how well-mannered it is.”

The factory shade of Indy Orange together with full GTS livery was applied by Glenn Cossor at Xtreme Industries, and the standard interior was fully refurbished by SuperTrim. Troy also took the opportunity to renew the wiring and the glass, which was sourced by Roy’s Windscreens. “Most things in the car have been reconditioned or sourced brand new to get it to the stage where it is now,” Troy says.

The finished product ran a PB of 9.85@140mph at the recent Holden-Powered Nationals at Heathcote, and while Troy reckons it probably has a 9.7 in it, he has some decisions to make.

“I’m ecstatic with where the car is now, but if I want to continue to race it I’ll need to put a ’cage in it, and I’m in two minds about that. I’m pretty keen to do Street Machine Drag Challenge, but the only thing I’m worried about is getting the car up to ANDRA spec. Trying to get the kids into the back with a taxi bar would be a pain and it’s something I’m not yet comfortable doing, but if I want to have fun racing it then I might not have a choice.

“I’ve had some big-dollar offers to buy the car since it’s been back on the road, but my wife Sarah puts a stop to me even contemplating it. Her attitude towards it is that I’ve had the car for so long that I’ll kick myself if I sell it, and all I’ll end up doing is build another one. I think she’s probably right!”

THANKS
Shane Gluyas (HPHEVN); Paul Stone and Kenny Perry – I couldn’t have done it without these close mates who helped assemble the car in my garage, and their guidance throughout the years; Roy Mouneimne (Roy’s Windscreens) for the glass and for helping me through his contacts to acquire the hard-to-find parts; Brian Cassar at Moe Engines; Brad Quirke for the bodywork; Andrew Haringsma at Extracted Exhausts; Danko Knezevic at Adicted Performance; my wife Sarah for putting up with all the crap that comes with building a car!