BACK in the October column I said that getting a street-driven naturally aspirated red-headed 308 into the nines would be a hell of accomplishment. Well, it’s already been done, by Mario Teuma. I had a great chat to him about his 9.93@134mph street-driven ’73 LJ Torana, which has a race weight of 2865lb. The car is almost entirely self-built, including the Mazda Classic Red paintjob.

Mario is a mechanical engineer who cuts down trees for a living. He’s had the LJ Torana for 21 years, and used to run a shop called Pro Modifications, which employed up to five people building race cars. He still looks after some of his old clients and is passionate about Holden V8s, but these days prefers the comparatively low-stress job of felling trees. The stock-stroke 308 motor is based around an HT block bored 0.030in over, while the cast-iron crank comes from a 253 that has had the smaller counterweights reshaped for reduced windage. Because of the lightweight CP forged lumpy-top 13:1 pistons and Scat rods, very little material needed to be removed from the 253 crank to over-balance the bottom end. The HT 308-block cylinders are sleeved and the block is grouted.

High-revving 308s are notorious for oiling problems, and Mario has spent a lot of time modifying the oil feed. Lift the Torque Power single-plane manifold off and you’ll find oil lines in the valley making sure each main bearing is well fed with its equal share of pressure. The oil pump is a modified big-block Chrysler and the ASR sump has a windage tray and scrapers in it. This five-year-old 308 gets the wheels driven off it on the street and buzzes to 8400rpm without any problems to the ACL bearings. 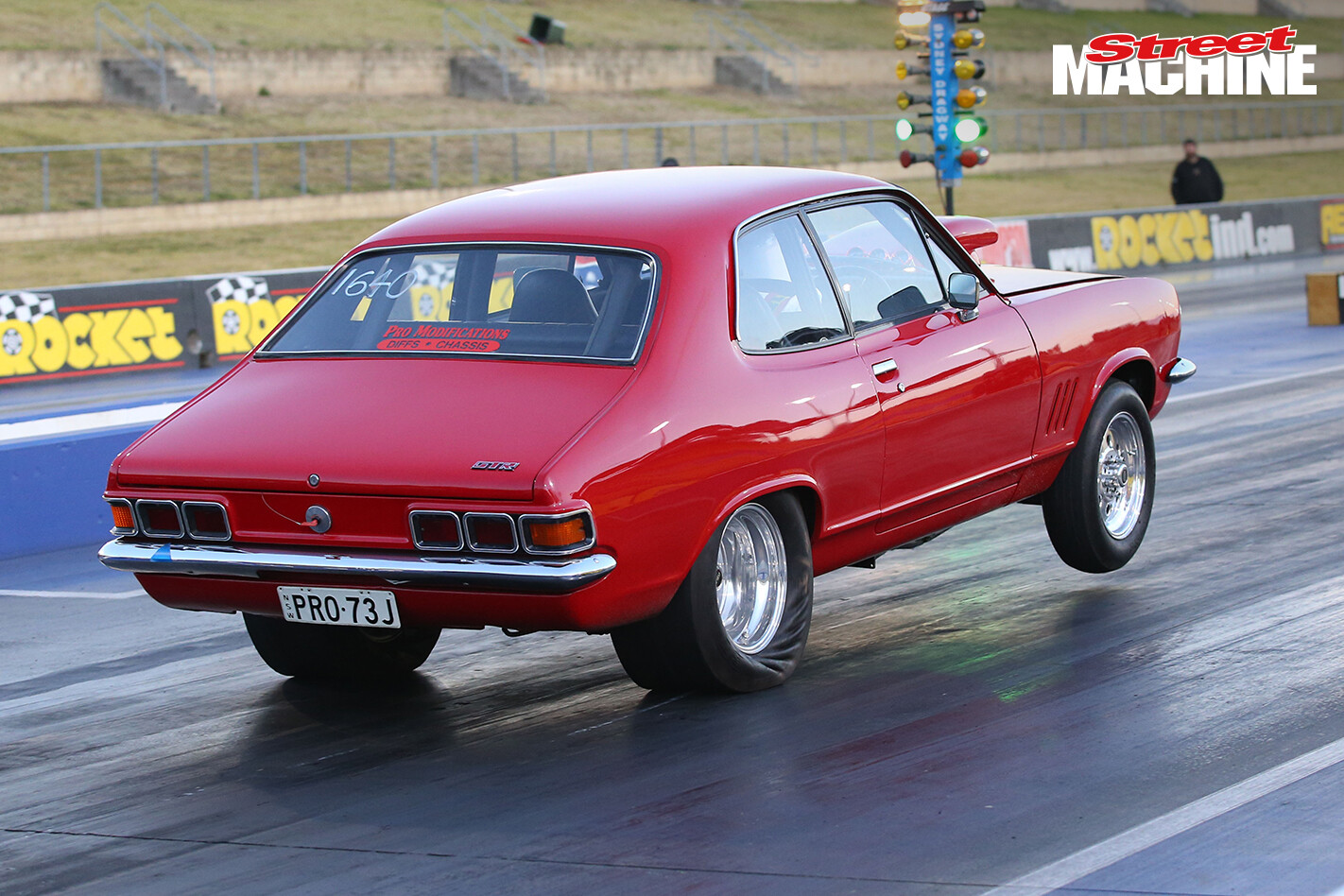 Mario ported the alloy Yella Terra Dash 3 heads himself. They were tested on Bernie Foley’s flowbench, and went 292cfm@.750in lift. The intake valves are 2.055in and the exhaust is 1.60in. Rocker arms are platinum 1.65:1 Yella Terras and Trend 5/16in chrome-moly pushrods have relieved tips on the end to stop the rocker arms from binding. Some of the specs on the solid-roller cam are secret, but the accurate duration at .050in is 272° intake and 282° exhaust with .700in lift. Those who have played with 308s on the dyno will know how important lobe separation and timing are - hence the secrecy. The roller lifters are Crane Ultra and the PSI valve springs are installed with 250lb on the seat and 580lb on the nose.

Depending on the fuel, modified 775cfm Barry Grant carbs are used. The alcohol carb has extended float bowls. For street driving on petrol a Mallory 140 fuel pump is hooked up to a custom alloy tank and for racing a MagnaFuel 500 is used with a Holley billet dead-head regulator.

Making power is one thing; getting it to the track is another. The Torana is fitted with an HT Monaro Powerglide with a bolt-on bellhousing. Internally, the ‘poor man’s Lenco’ has a high-tensile input shaft, steel hub, extra clutches, a Pro Tree transbrake, and is fitted with a Dominator Top Eliminator 6600rpm stall converter with a mechanical diode. A tough three-inch chrome-moly tailshaft (made by KCDR Drivetrains in Sydney) sends the power to the back wheels via a nine-inch with a  4.88 geared Detroit Locker and 31-spline Moser axles.

Wheels are 15x5 Draglites on the front fitted with Michelin 165 radials and 15x10 Draglites out back wrapped in Hoosier Quick Time 295 radials. Modified 90:10 Koni shocks are used on the front suspension, with single adjustable Spax coil-overs on the rear. The standard rear suspension pick-up points work with adjustable chrome-moly top and bottom control arms to launch the car with the front wheels in the air.

Mario made the 1¾in to 17/8in stepped headers with 3in merge collectors that feed into dual 3in exhaust pipes. Before the rear axle are 16x5in resonators, and behind the diff are 12x4in box mufflers, 18 inches long. Inside, Mario runs Cobra seats along with a super-neat six-point chrome-moly ’cage.

When I look at this red-headed 308 combination, the reason the Torana has run high nines naturally aspirated is attention to detail. Mario has spent a lot of time refining what started out as an 11-second street engine. Watch this space – I’m sure this won’t be the last time you see Mario’s name in Street Machine.