MARK Sass is coming on his first Street Machine Drag Challenge this year with his nitrous-sniffing supercharged 408-cube LS VT Commodore. It has gone 9.2 @151mph without the gas, so this is going to be a car to watch at DC. Here's the feature story on Mark's VT from the latest Street Machine LSX Tuner mag.

THIS IS a three-dimensional, noisy, shiny and fast business card for Sass Automotive in Hoppers Crossing, built by LS guru Mark Sass out of a dead runabout. Formerly powered by a sad 3.8 Ecotec he’s turned it into a blown 9-second 408-cube monster, a long way from its humble origins as a family hack bought off eBay around six years ago. “It was a six cylinder on LPG and it was pretty beaten up,” explains Mark, the bloke holding the keys to both the Berlina and the Sass Automotive workshop. “We bought it as a third car; a shopping trolley, a get-around. And that’s what it was for three years. My wife Jacinta drove it — until the motor blew.”

With crazed paint and little else to endear it to anyone, the elderly Berlina was destined for the crusher. “In fact I’d already rung the tow truck to come and get it,” says Mark. “But then a mate said ‘hang on, you’ve got an LS1 out the back. And a heap of nitrous stuff, why not build a cheap race car?’ He was right! Why not keep it and race the arse off it?” 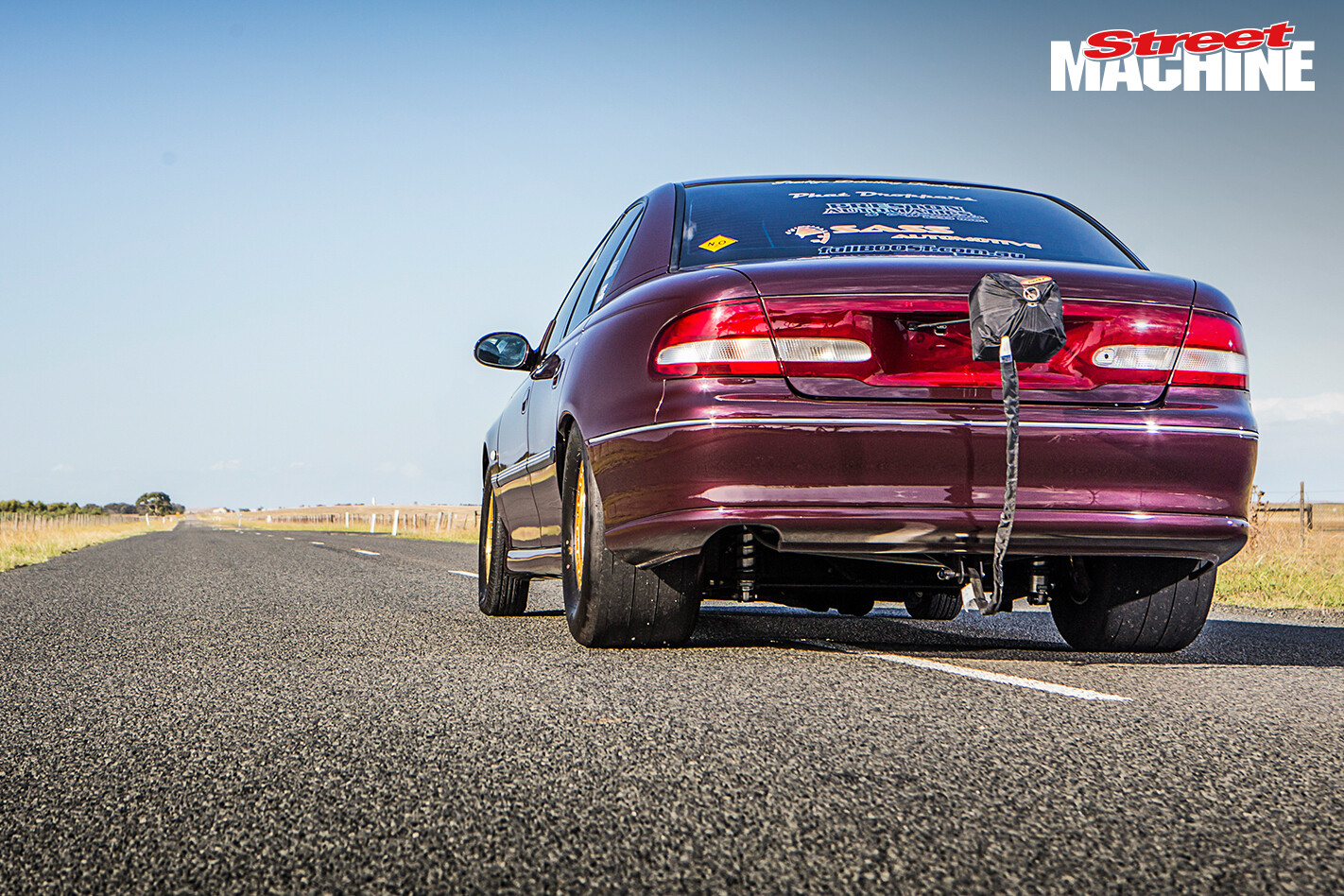 The tow truck was cancelled and like a lucky dog on death row at the local pound, the injured Berlina was given a reprieve. Its broken Ecotec V6 was binned to be replaced by an almost standard Gen III 5.7 and the associated hardware and wiring for the transplant.

Mark also slipped in a plate-style nitrous system and N2O-friendly camshaft. “We had an auto built for it, too,” says Mark. “We kept the 4L60E [the early Holden spec LS1’s standard type four-speed auto] and Preston Automatics did that, and the convertor. We had pipes, gears — all the usual stuff. We raced it in that state for a year and a half and did a best of 10.3 at 133mph.” Not bad for a street car with some basic credentials. Apart from the prepped driveline and suspension the car was factory, right down to seats and trim. One exception was the roll-cage, required for safety.

“It was still a shitter!” laughs Mark of his by-now 10-second tatty ripper stripper. “But like many race cars it was never meant to turn out the way it did!

“Back when I saved it in 2010 I was considering building a race car from a brand new VE Commodore shell,” Mark says, “But it wouldn’t have been registerable and I really do like the idea of street registration; of being able to drive a dual-purpose car on the street and race it.” There are plenty of other benefits too, such as build cost and the price of spare parts, the lack of trailers to race and less maintenance. And surely one of the freedoms is tuning an engine for its best on petrol bought for $1.50 per-litre just about anywhere, not exotic cocktails from 20-litre cans.

“Originally the car was full weight,” says Mark. “And around that time [after it had laid down some 10s] I got an offer to buy the engine out of it,” says Mark. “It was a good thing but quite mild and it had around 150,000km on it. That engine is still going strong in a burnout car that gets campaigned all around the place!”

So with an empty engine bay stage two of the build began. “The first thing I did was have a really polite conversation with my wife,” says Mark with a laugh. “I wanted to keep campaigning the car as a nitrous car but take it up to 402 cubes.” His plans also included a TH400 three-speed auto — a more durable and reliable box at the level of power Mark anticipated — and a conversion to a four-link rear end. He was stepping-up, in more ways than one. 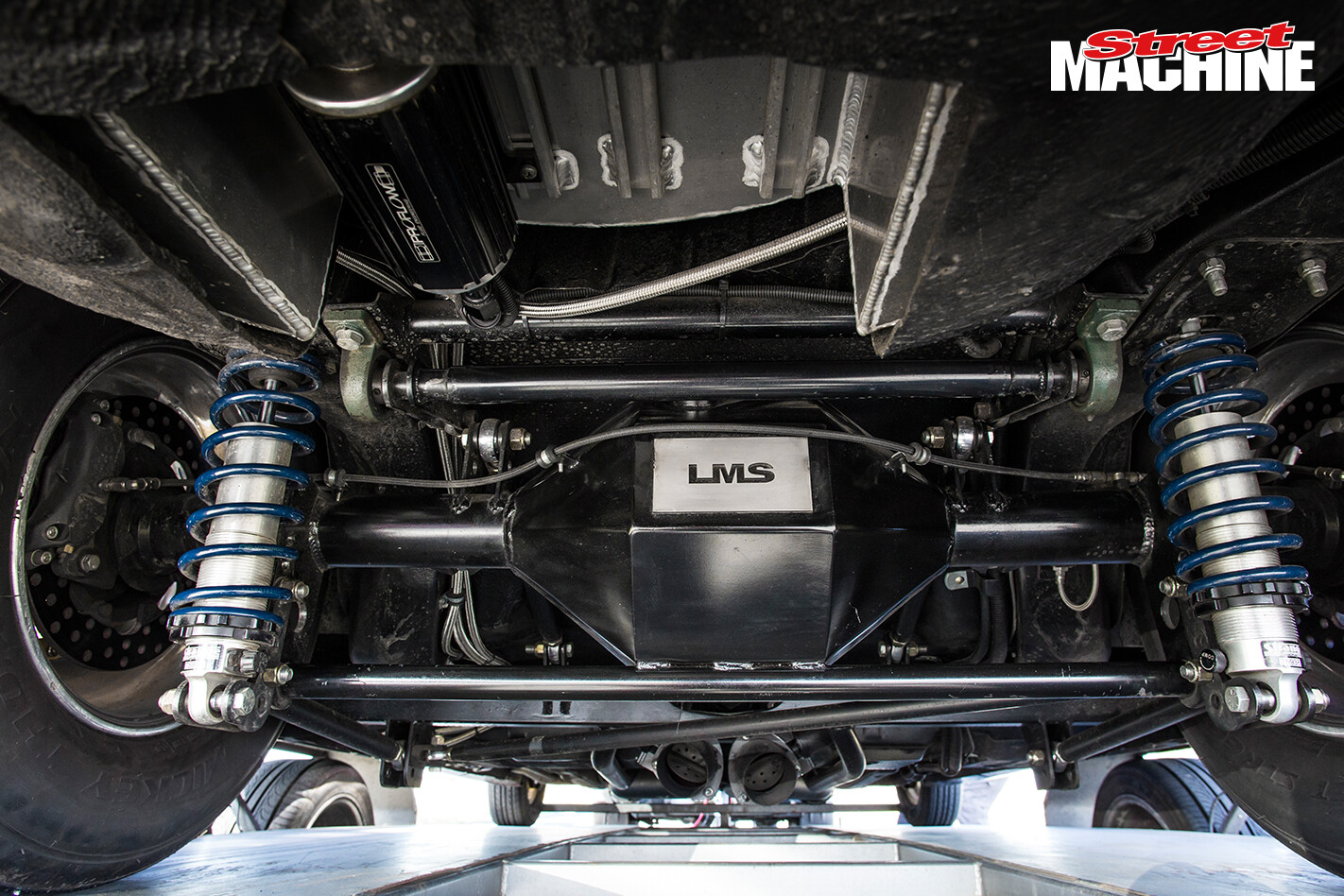 LMS Motorsports mini-tubbed the rear end. In went four chrome-moly links locating a sheet-metal nine-inch housing around an alloy diff centre, an Eaton TrueTrac LSD, 3.7 gears and Moser 31-spline axles. The Commodore’s standard rear brakes were replaced with a set from Strange and, by now, the standard ABS had been ditched, too.

The paint was crap, but under that the body was OK. Jason Grimaldi at Pat’s Body Works gave it a fresh coat of the original Rubens Red after Jason Theodore did what little panel work was required. But really, this car is about the motor. Mark has had great success with alloy blocks but for his monster build, he started with a 6.0-litre used in North American commercials. Coded LQ9, it is an iron truck motor, not an alloy passenger car block.

“It’s a great block for handling horsepower,” reckons Mark. “I’ve seen 1600 horsepower out of them. They take a stupid amount of punishment!” In it, he’s installed a 4340 K1 crank and H-beam rods and Carillo CP Bullet pistons. There’s a Rollmaster double-row timing chain and an upgraded oil system with Mellings gear. 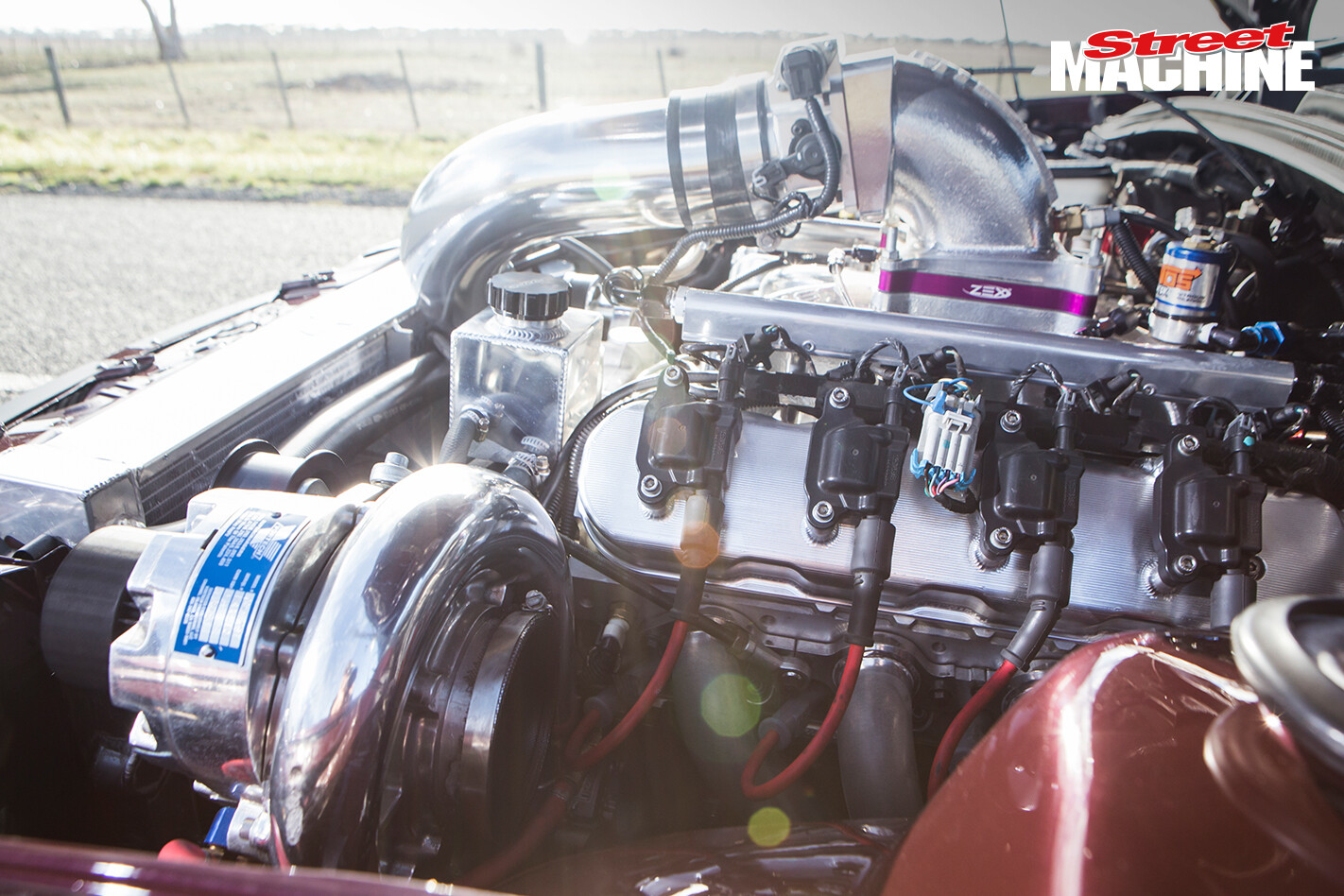 A stout bottom-end is essential to be safe to 8000rpm but the head design is the path to power. Mark wanted to use a set of LS7 heads, GM’s best-breathing factory heads, but as the LS7 has a bigger bore, the heads are not a drop-on fit to the factory 6.0-litre block.

“It’s impossible [standard] to fit a set of LS7 heads onto the [iron] bore,” explains Mark. “We modify the exhaust valve and the chamber in the head to make it work.” A set of custom-made head gaskets seals the deal, keeping the 11.5:1 static compression tight. 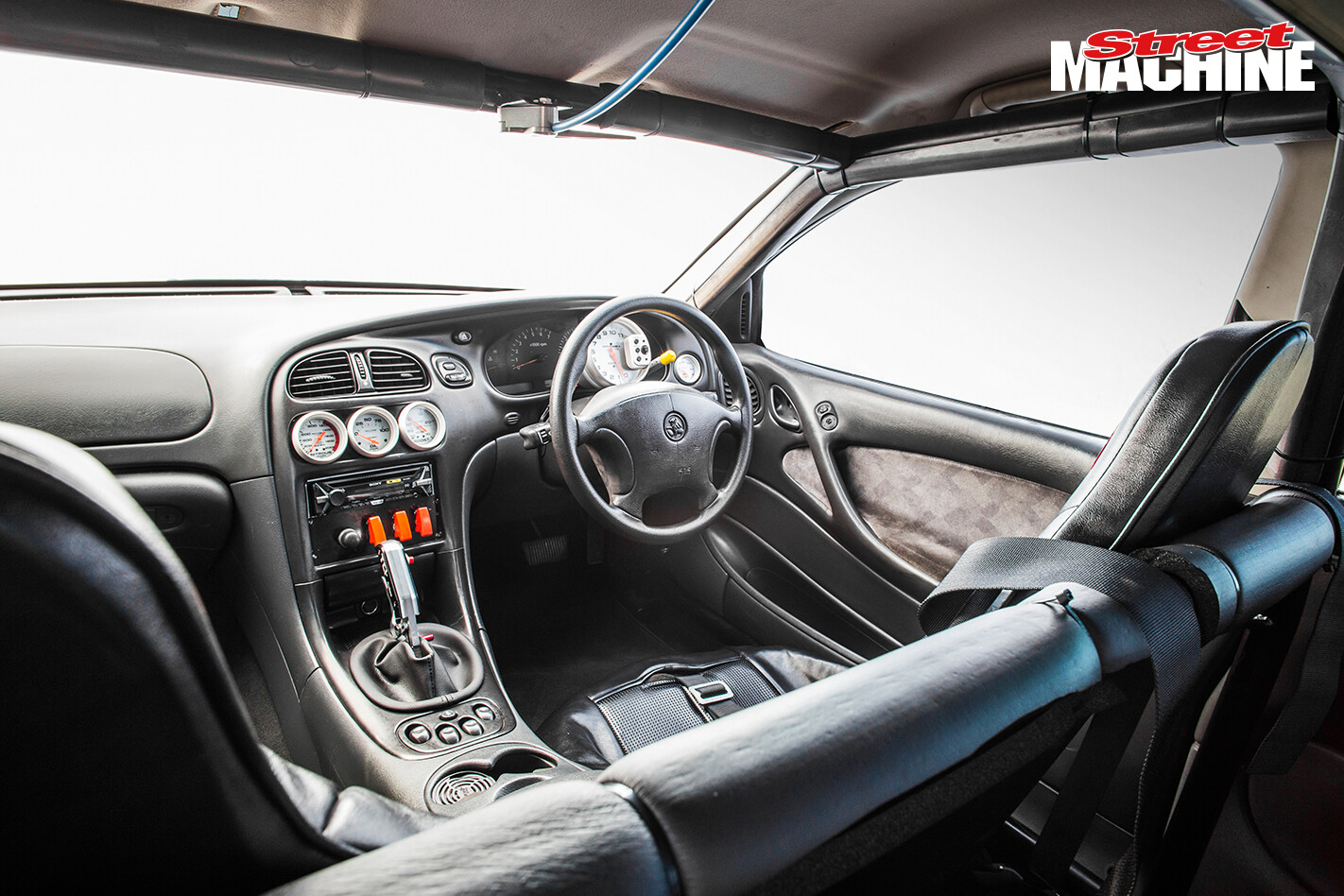 Filling the valley is a single-plane high-rise manifold carrying a set of 1000cc injectors and a 92mm throttle body. Surprisingly, the management system is the GM/Holden system that’s been hacked and tuned. The cam is a special grind to make the most of the nitrous. As with naturally aspirated, and forced induction engines, nitrous engines work best with a particular breathing pattern — and of course that is the task of the camshaft. Mark recites the specs: “It’s 240 on the intake and 260 exhaust and 114.5 lobe separation. We’ve given this thing so much power. It has a stupid amount of power and with enough cam, it keeps flowing to the moon!” 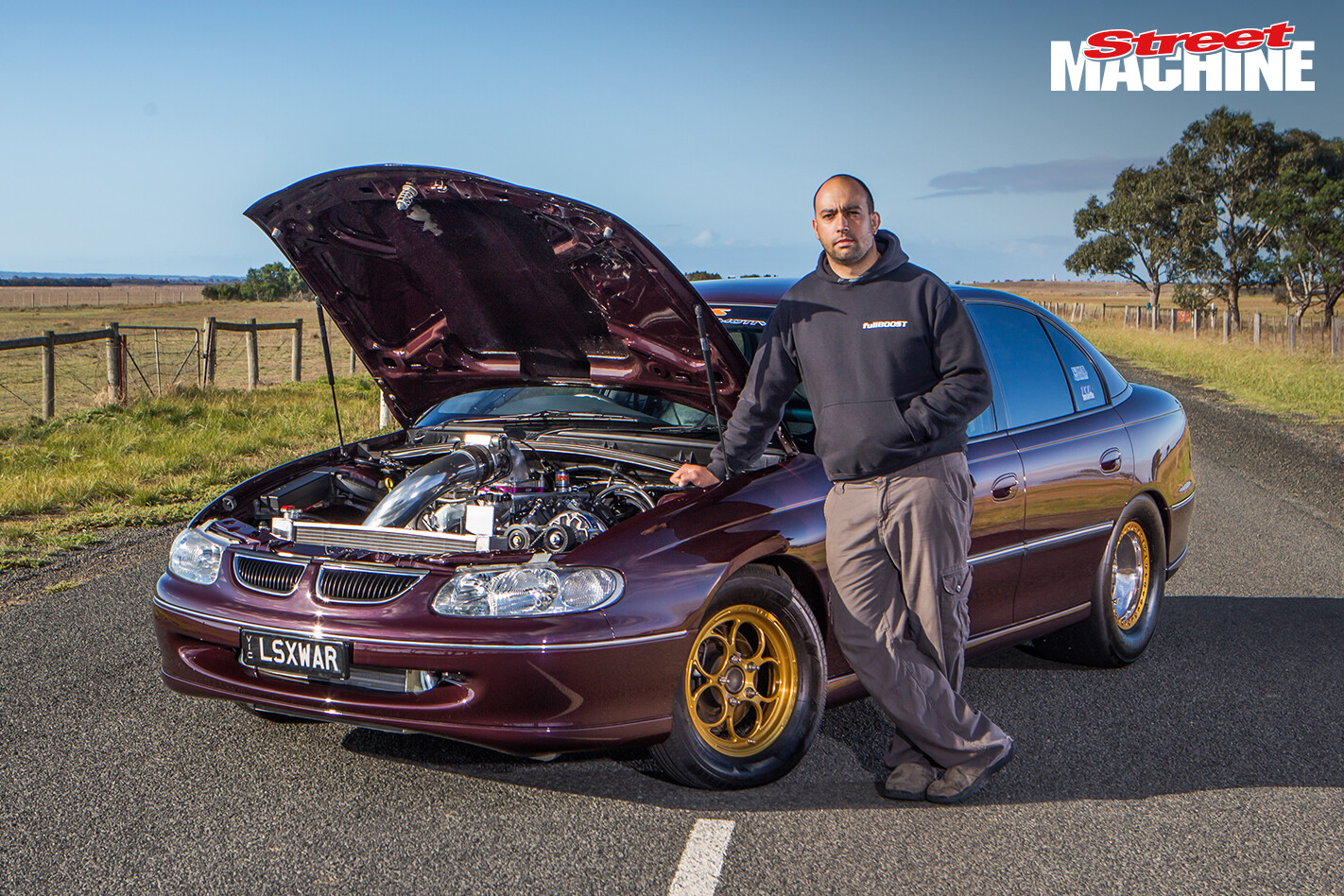 Oh, and now it’s supercharged, using a V7 Vortech belt-driven centrifugal blower. No nitrous yet — the development of this engine is a step-by-step process — but with 640kW at the tyres, the car has improved its time to 9.2 at 151mph with the extra air-cramming of the blower at the top end.

Mark reckons the engine could be replicated for less than $30K. Okay, so that’s not pocket money to most of us, but it’s less that you’d burn up in a few years buying a brand-new car and racing is more fun that standing around in a dealer’s forecourt!

“An engine such as this needs to be affordable,” reckons Mark. “As a business owner, I need people to see it and be able to say ‘I want that. Let’s do it!’”