THE Good Vibrations March Meet, held each year at Auto Club Famoso in Bakersfield, California, kicks off the racing season for many west-coast locals. It’s a weekend full of vintage nostalgia drag racing, with classes ranging from 12-sec gassers up to nitro Fuel Altereds knocking on fives. We caught up with Bakersfield local David Mallory, who was kicking off his season by shaking down his ’69 Camaro in the hope of racing in B/Gas this year. 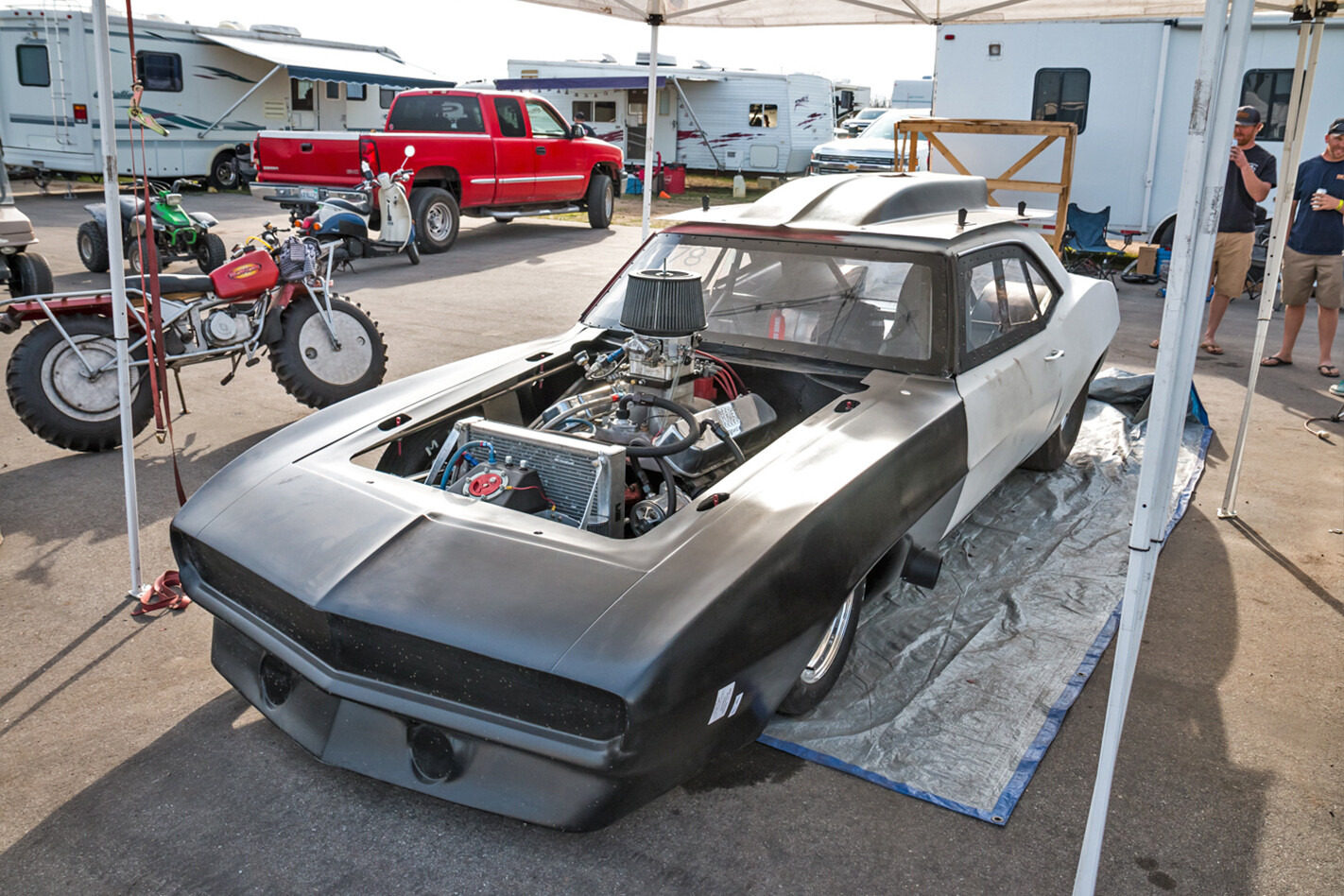 This looks like a very fresh build. What’s the story behind it?

Well, it’s the first time it’s been out racing in over 10 years. The car originally came from Texas and ended up with a guy in Isabella, not far from here. Apparently it has a lot of race history in Texas, and you can see the original red flake paintjob the guy never finished sanding off. It was a full project but he never finished it before he passed away and I picked it up a few years ago. I’ve been working long days every day for the last month to get it here to shake down. 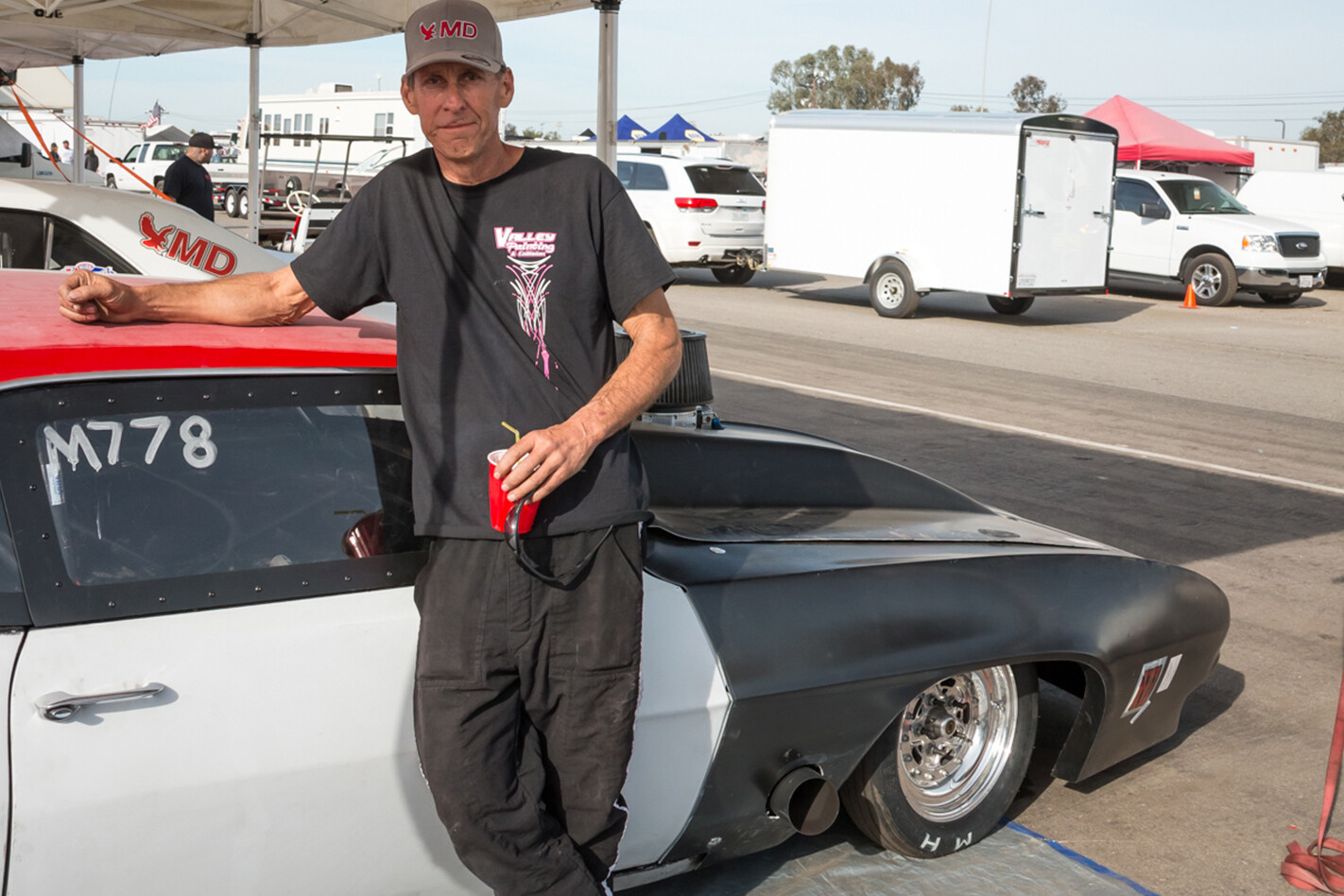 What state was it in when you got it?

It was pretty much as you see here, but all in a million pieces. I had to put everything back together, but even though I had all the pieces ready to go, it didn’t mean everything worked out well. It’s been hard to get it done. Just a few weeks back, I was cutting a piece of bodywork and the disc blade shattered and tore up my face [points to cheek and scar from mouth to ear]. Had it gone any further back, I might’ve been a lot worse! Maybe God doesn’t want me to run the car. What’s with the shipping invoice on the front clip?

[Laughs] Well, if I didn’t like it, it would be easy to send it back! That was one of the pieces I had to buy to get it done. The whole car is fibreglass and we put it on the scales and it weighs 2150lb – nice and light. Though I don’t think I can return the front now [points to exhaust cut-outs]. How did it run today?

All right. I’m happy that it’s all together and fired up and we made a single pass in C/Gas. We got knocked out because I ran an 11.13. I didn’t realise I had the linkage set up backwards and I only had quarter-throttle! I think we can definitely run in B/Gas at 8.6 index, but the real aim is about 8.3s. 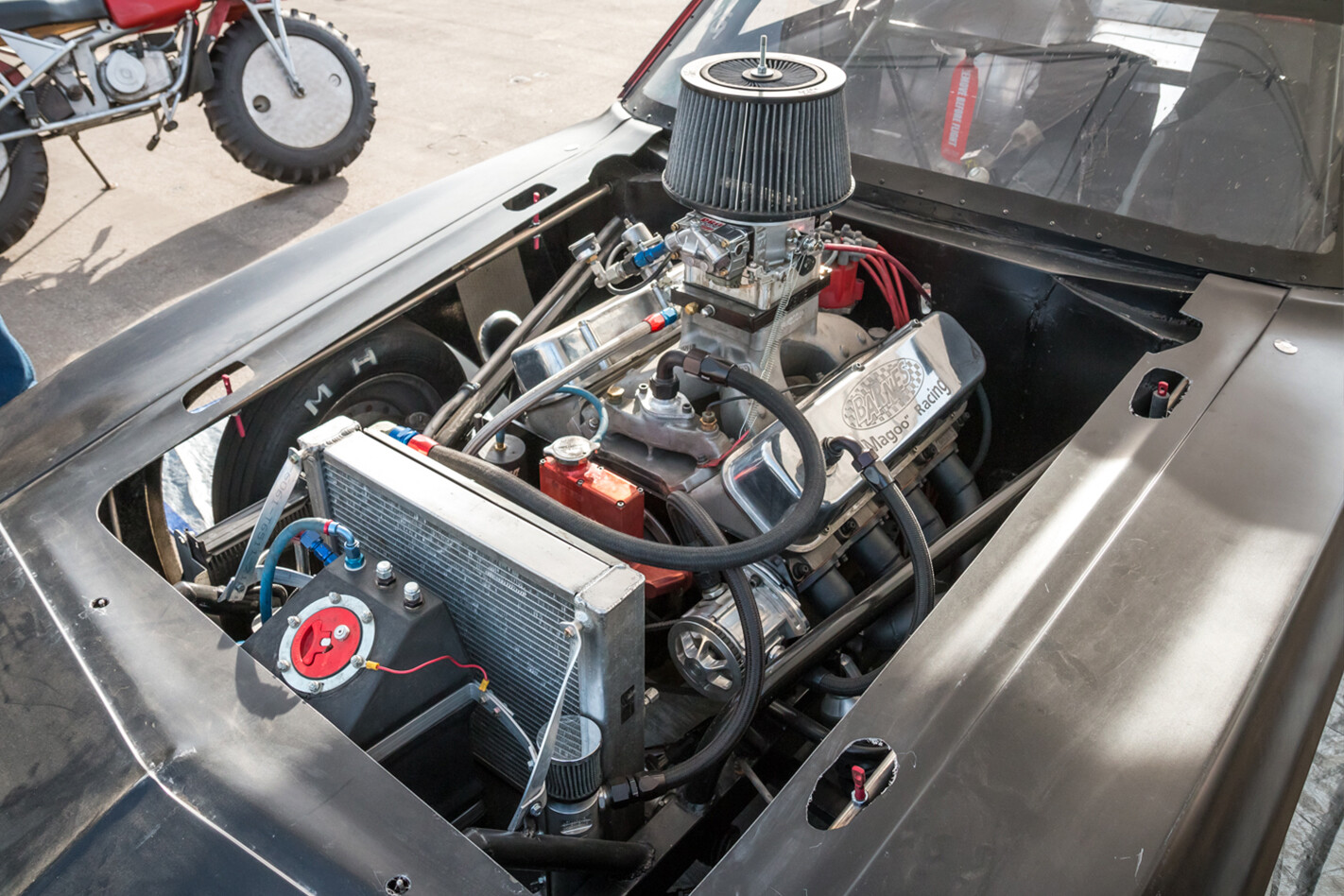 It’s a full tube frame and ’glass body, and I did stuff like built the headers and interior bits. The engine is a 496-cube Chevy I pulled from the Camaro next to it, which is also my car, but my son’s racing it this weekend. I put a big VH1 carb on it and tuned it up to run in B [Gas]. It’s about 900hp and in a much lighter car than it was before. It’s got a Powerglide two-speed. 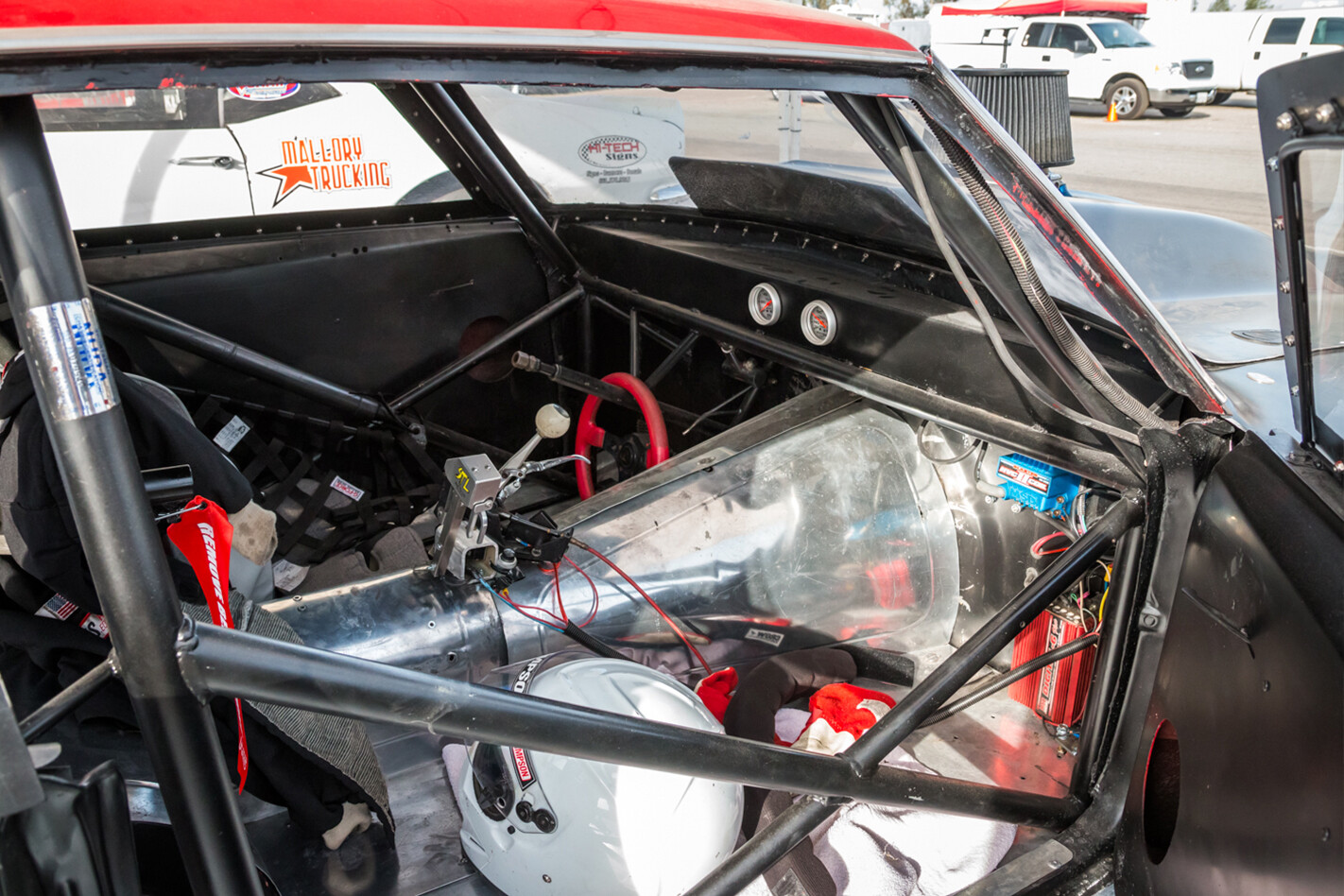 Having two cars here and racing with your son must be nice! What else have you got?

March Meet is always a good time, the whole family comes out and we barbeque and stuff. I’ve actually got five Camaros: four ’67s including the one my son is racing, and the ’69. I’ve been racing them for many, many years now. I also finished up this bike here, and that’s been a lot of fun. Two-wheel drive! What is it?

It’s a 1974 Rokon Trailbreaker, which they used to call Rubicons. It’s two-wheel chain drive and was used for hillclimbs and stuff like hunting. My dad used it to hunt deer a long time ago but it needed a freshen-up. He even got to ride it again one time before he passed away. I’ve got a ’69 one at home too – they’re cool bikes. I’ve just been using it to ride around the pits. 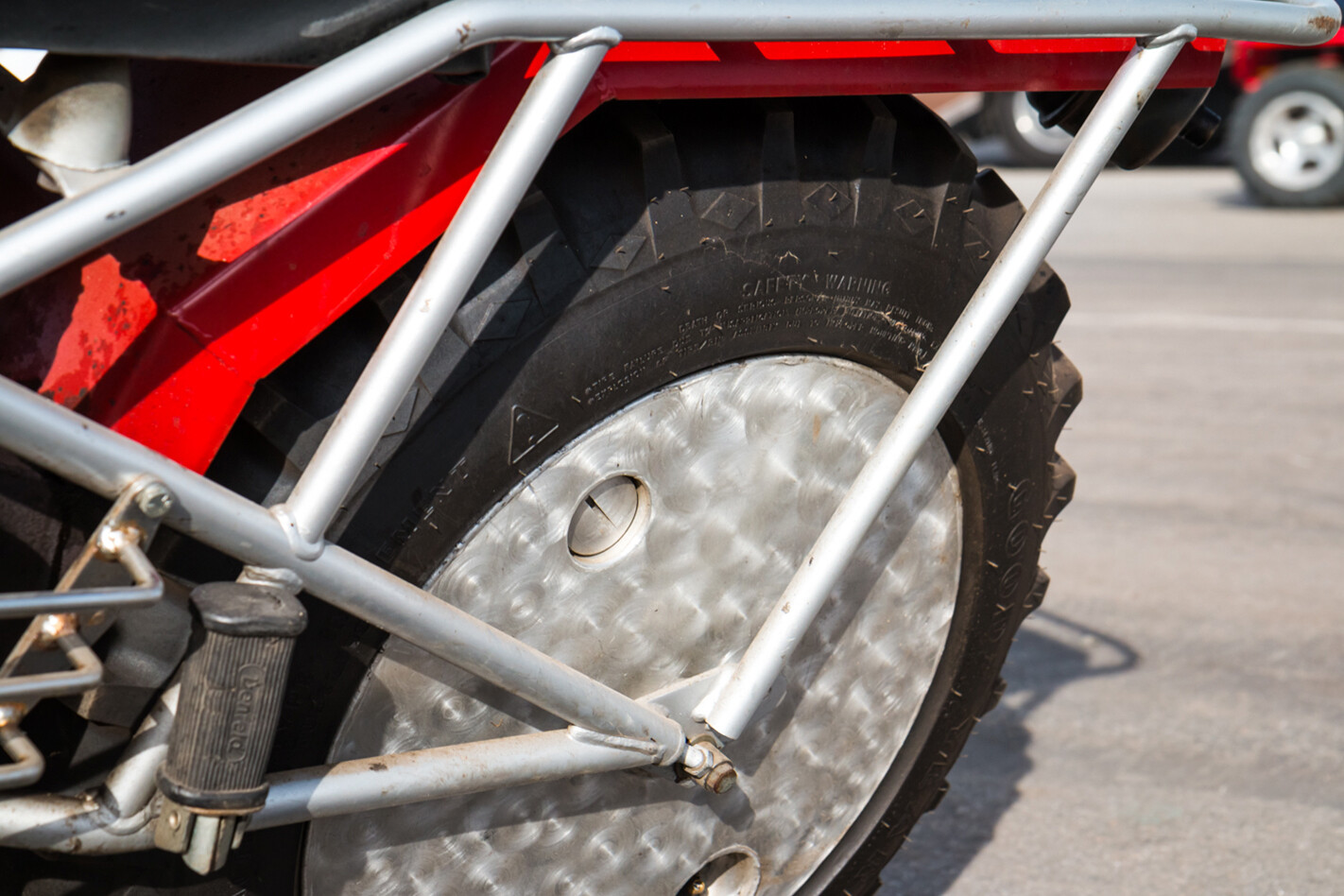 What did you do to it?

It had been sitting for a while so I started by replacing the steel gas tank with a plastic one. And I decided to keep working on it and make it real nice. They’re awesome machines – that front diff actually works to let the wheel spin at a different speed to the rear, and still have full steering. And those wheels, believe it or not, are hollow. Rather than hauling, you can fill them both up with around four gallons of water or fuel. Or whiskey! [laughs]