Big wheels in the back. Big motor in the front. That's Bobby Alloway's secret to success

Big wheels in the back. Big motor in the front. That's Bobby Alloway's secret to success

I GOT a bit excited when I was asked to write this story. It’s always gonna be cool to write about a killer ’67 Fairlane hardtop with a Boss 429 and a down-in-the-nose rubber rake. But that’s not the reason I was a little giddy.

The stance hints at who the builder is. He’s usually into much older stuff — early 30s Fords — and they’re just about always black and covered in flames. That man is Bobby Alloway, from Louisville, Tennessee. 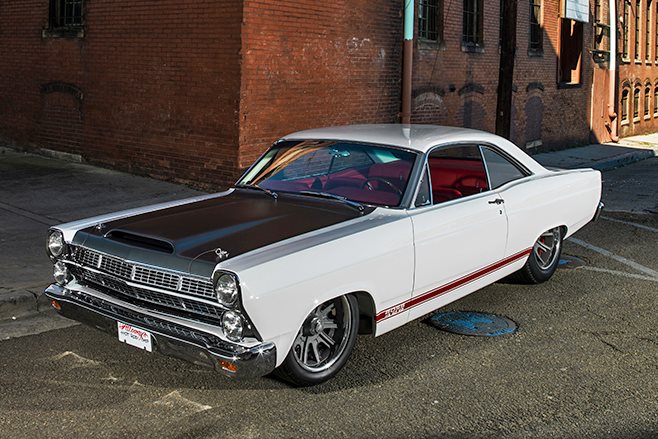 You probably won’t be able to get your stock ’67 Fairlane sitting this low. Bobby drew up the chassis in-house and had Art Morrison fabricate it. The ride height just behind the front wheels is about 4in (102mm)

I first heard of Alloway’s Hot Rod Shop in 1996 when I stumbled across an issue of The Rodder’s Journal at a swap-meet in Footscray, Melbourne. Gracing the front and rear covers were two sinister black and flamed ’33 Fords, one a roadster, the other a coupe. The cars were closely related but not identical, with similar flame jobs, tough big-block Chevs and the raked stance that has become an Alloway signature.

But Bobby and his team are also adept at creating street machines and this Fairlane was built for long-time customer George Lange. Bobby describes him as “a good customer”, having owned no fewer than 10 Alloway cars. 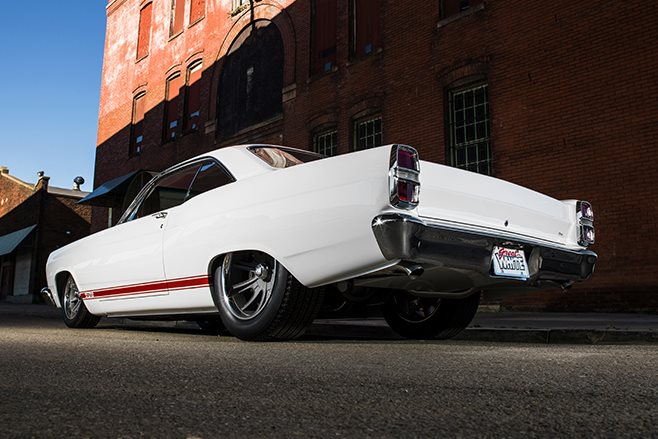 “We built him a ’67 Mustang fastback that was on the cover of Hot Rod. We did a ’57 Thunderbird that won Street Machine Of The Year in 2004, and a ’32 roadster that won America’s Most Beautiful Roadster in 2003.”

Bobby says this in a laid-back Tennessee drawl, like it was no big deal. He tells it like it is and doesn’t get worked up about anything. But his is the only shop to win all of the major US awards, including the Ridler in 1985 with his own ’33 Vicky, and the 2012 Goodguys Street Rod Of The Year with a ’32 Vicky he built for David Walsh. He was also inducted into the Rod & Custom Hall of Fame in 2004 and honoured with Builder Of The Year at the Detroit Autorama in 2011 and at the Grand National Roadster Show this year. 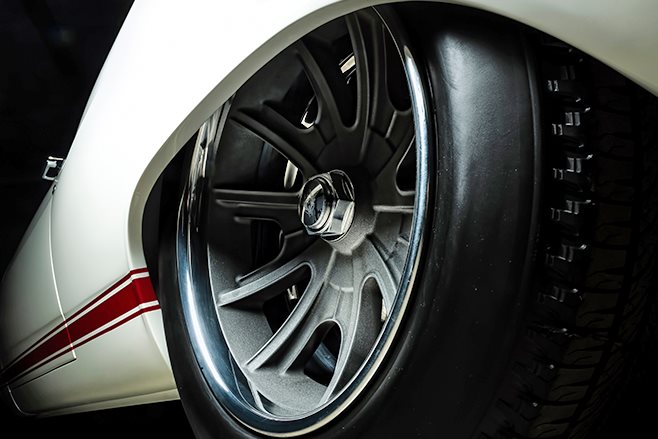 The first step in the Alloway look is to work out the stance. The car is stripped to a shell and the intended wheels and tyres are rolled under it. Alloway uses Art Morrison chassis built to his specifications, and a flat floor is welded in, which makes it a lot easier to get the finish just as shiny as the top side.

Although the ’67 Fairlane is a unibody car, a full chassis is used to help nail the stance and add all the other benefits of a Morrison chassis.

Bobby’s preference is to keep the later-model stuff pretty much stock when it comes to the body. 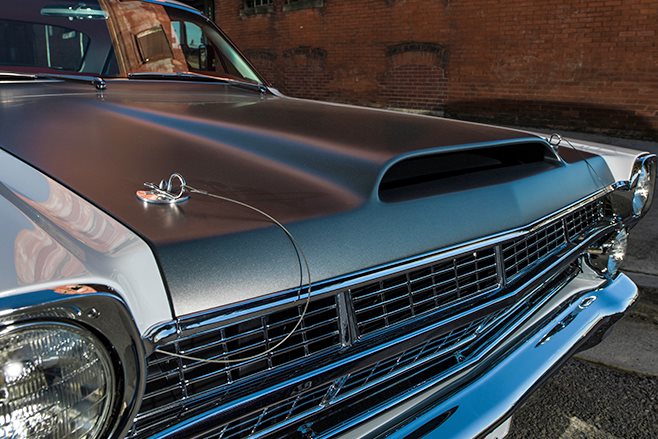 “The biggest thing we did to the Fairlane was lengthen the wheelbase five inches. The front wheels went forward two inches and the rear wheels went back three inches. That was to take the heaviness out of the quarters and the nose; it actually made the car look longer,” Bobby says.

“George wanted something different. Of course, my first idea was we’d paint it black and put red guts in it but it was quite a bit easier to do it white. 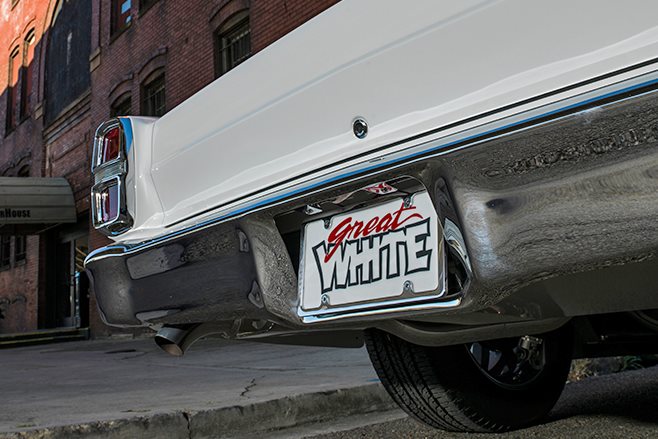 “I thought the car would have been stunning in black, but it probably drew more attention being white, because we did it. This is the first white car we ever did and when we debuted it at SEMA, it was on Halloween. Everyone thought it was a wrap and we’d take it off and it would be black.”

Just prior to taking the car to the Grand National Roadster Show, George had a fall and broke his neck but he still made it along. 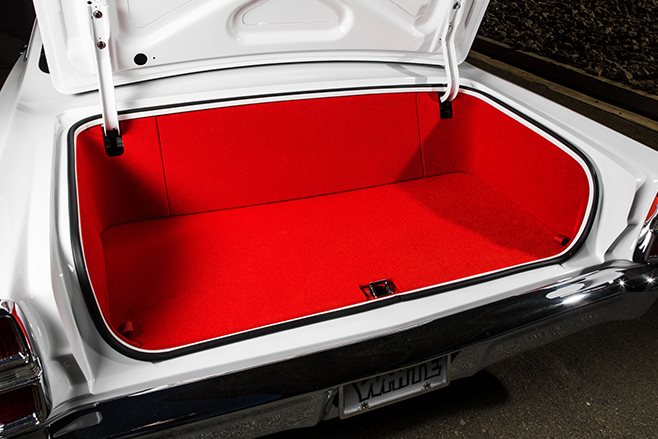 The boot is neat and functional, just like the rest of the car

“He had two black eyes and a neck brace on. Everybody wanted to know what happened so I said: ‘Well, that’s what it takes to get a white car out of me. We had to fight over it and he ended up with a broke neck,” Bobby jokes.

To match the big tyres in the back, Bobby likes his cars to have big engines in the front, usually big-block Chevs or all-alloy Hemis. Not in this baby — it’s Ford all the way, in the form of a Boss 429 that has been stroked out to 503 cubes. 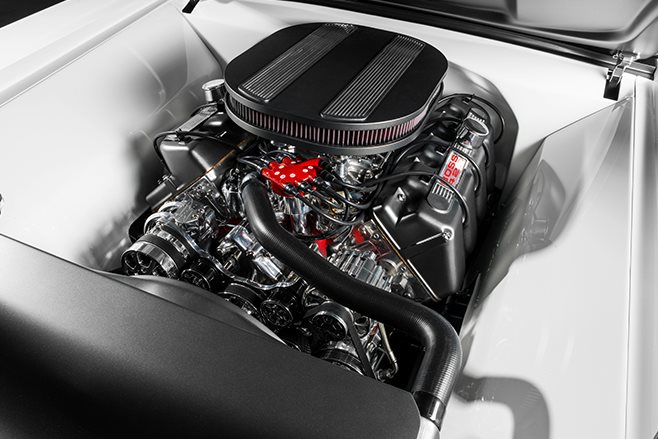 The genuine Boss 429 engine was built by Bobby’s engine man, Myron Keasler at Keasler Racing, and stroked out to 503 cubes. It’s good for 650hp and that’s with the air conditioning on!

Built by Keasler Racing, it’s good for 650hp and it’s all FoMoCo: “A guy by the name of John Vermeesch in Detroit had a bunch of stuff; he was the go-to man at Ford Racing. I bought that Boss and three Cammers from him. We had another car at SEMA, a ’56 Ranch Wagon. That’s mine and it’s got a Cammer in it,” Bobby says.

“I said something to — you’ll print this and I’ll get in trouble — I said something to [US journalist] Gray Baskerville one time, joking. He was here at the shop and he wanted to know why I ran big-blocks so I said: ‘Those little motors are training motors. Once you learn how to drive you can go to a big motor.’ 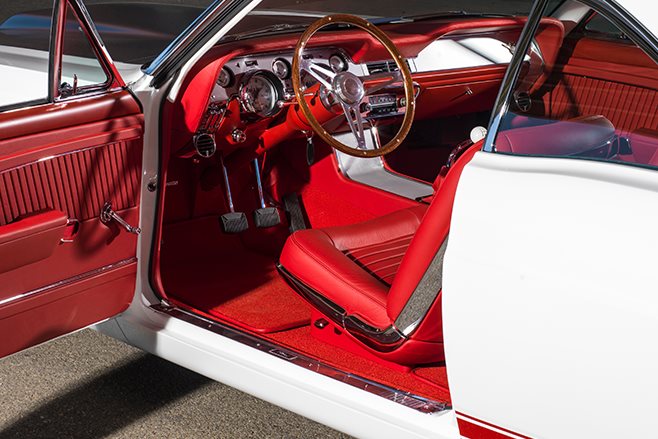 “He printed that and I got so much hate mail, and it was a joke. I just always did like the sound of the big motors — there’s just no substitute for cubic inches. To get the power out of a little motor that a big motor makes stock, you’ve got to spend a bunch of money, so why not just start out big and go from there?”

The big-inch Boss motor breathes through a pair of three-inch pipes and custom Flowmaster mufflers made by Barillaro Speed Emporium just over the river in Knoxville, Tennessee. 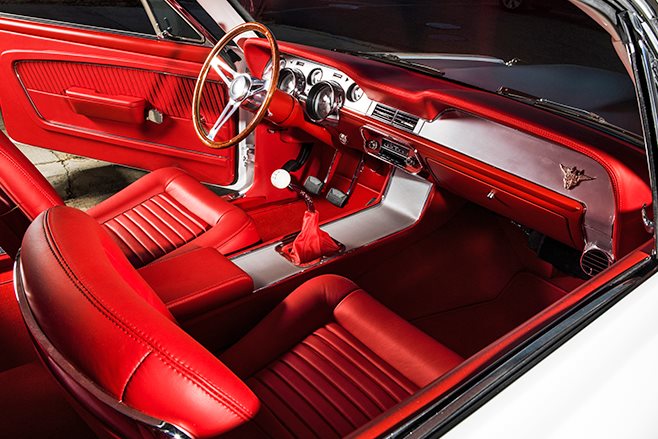 It looks like a tidy stock interior but practically everything is modified from another Ford or custom. Hurst shifter rows a Tremec five-speed and that tiller is off a ’65 Shelby Mustang

Most of the cars that leave Alloway’s have three pedals; the Fairlane does too, thanks to a Tremec five-speed. Out back, the nine-inch swings off a four-bar just like you’d expect to find in a hot rod. 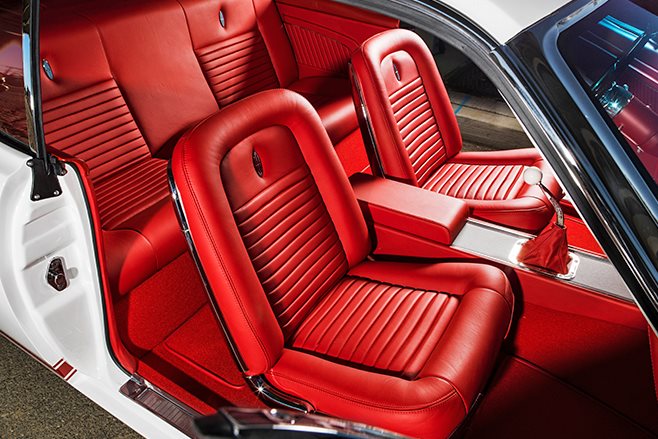 At a glance, the interior looks nicely restored but the truth is there’s not a single ’67 Fairlane part in there. What is in there is a few choice pieces from the Ford parts bin, with the rest custom-made and beautifully trimmed by Steve Holcomb at Pro Auto Trim. The dash is from a ’67 Mustang but widened five inches and filled with custom gauges from Classic Instruments. The front seats are ’63 Galaxie buckets that have been reshaped and stitched in a pattern more similar to a ’67 Mustang. The rear was custom-fabricated, as were the door panels, all again mimicking the Mustang styling. 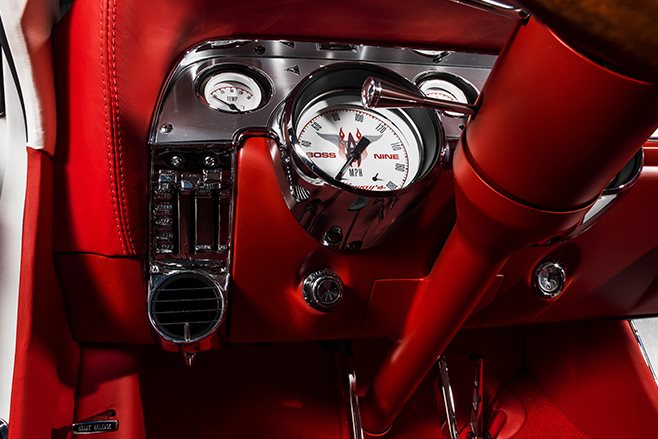 The finishing touch on the car is a set of custom Billet Specialties knock-off wheels that are reminiscent of the 10-spoke rims fitted to Shelby Mustangs, just a little bigger. They measure 17x7 at the front and 20x10 at the back, and the grey centres match the paint on the bonnet.

GT stripes just above the rocker panels add a splash of colour and let the world know about the Boss 429 powerplant, and that’s pretty much it. Straight as an arrow, tough as nails and to the point. That’s how Bobby Alloway is and that’s how he builds his cars. 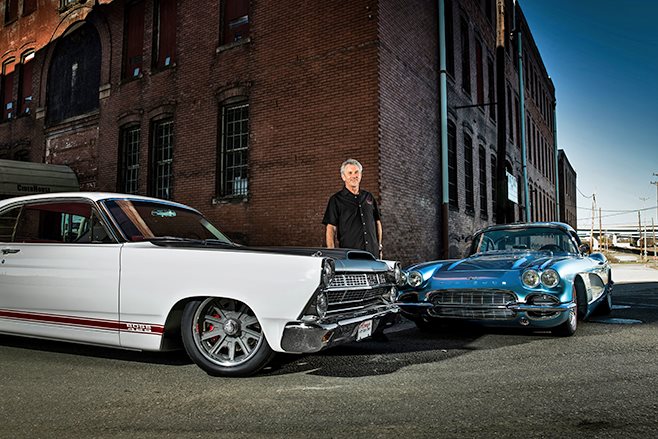 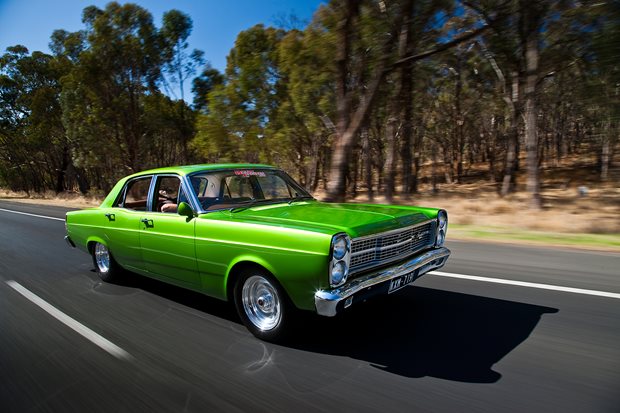 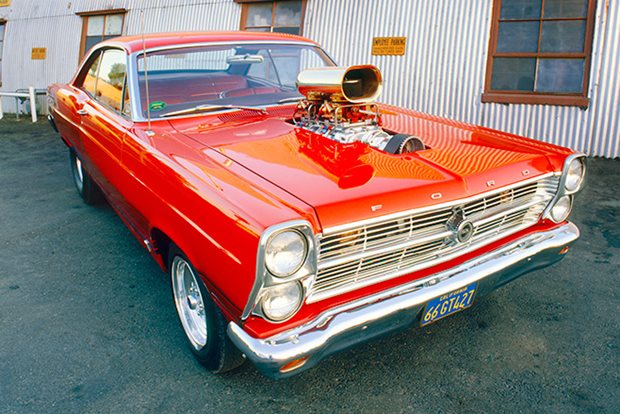 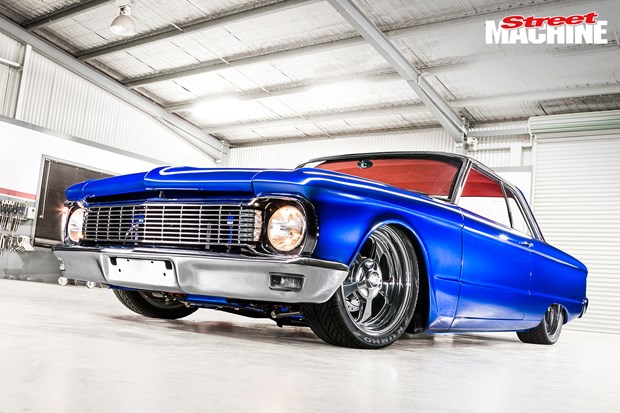