WITH just enough time to grow his hair long following his now-legendary role as John Milner in the 1973 classic, American Graffiti, Paul Le Mat slid back behind the wheel of a toughie to play young Los Angeles mechanic Bobby in 1975’s Aloha, Bobby and Rose. 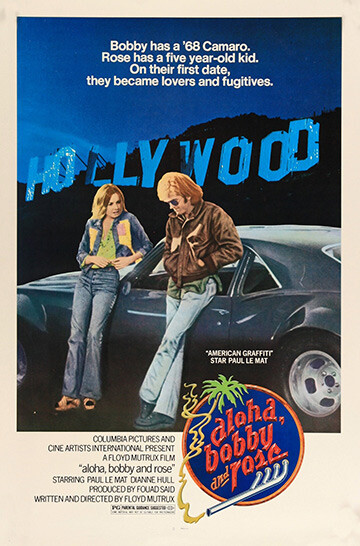 Bobby is floating through life spinning spanners by day and cruising and racing his beloved Camaro at night, while hustling cash at pool halls in between. Through bad choices and shirking his responsibilities, he seems permanently stuck behind the eight-ball – sometimes literally – and dabbles in petty crime to help make ends meet.

He strikes up a friendship with the sweet and spunky Rose (Hull), a young mum balancing raising her son with caring for her alcoholic ex-actress mother (Bartlett).

With their future prospects looking decidedly stale, the couple look to each other in the hope of finding some direction together. When a dodgy robbery ends up with the accidental killing of a young shop assistant, Bobby and Rose go on the run and hit the road, looking to escape into Mexico.

The romance and freedom normally offered by the open highway is heavily clouded by the trouble hanging over the pair, which soon has Rose second-guessing her choices and questioning the strength of their fresh relationship.

A chance meeting with a fairly loose wannabe football star and entrepreneur, the gun-toting, hard-drinking Buford (McIntire), along with his better half Donna Sue (French), initially looks like trouble for Bobby and Rose. But after Buford learns of their predicament, he throttles back on the attitude and offers them a chance for a clean start, so the pair pack up to follow Buford east in the hope of eluding capture.

Le Mat’s portrayal of Bobby is very Milner-esque, but works okay, whereas Dianne Hull as the sweet and naïve Rose is rather bland and lacking conviction. But Tim McIntire as the boisterous, loud-mouthed Buford steals the show, and will have you cringing at times on the lead characters’ behalf. Leigh French as Donna Sue matches him perfectly, with plenty of sassiness and spunk, and had the flick been about this pair, they would have smashed across the border to freedom with the music blaring and nary a toilet stop or relationship drama between them.

Aloha, Bobby and Rose starts with all four barrels wide open and smoking the hides, but soon snaps the throttle cable and coasts to idle – ironically mirroring the emptiness of the main characters’ lives. The soundtrack, however, is pretty cool, with several early Elton John tunes adding enjoyable warmth to the sights and sounds of 1970s LA. The Camaro is definitely the star attraction though, and its final black guise will have true hot car aficionados cheering – and the purists crying into their matching-numbers engine coolant.

ACTION:
Bobby’s Camaro looks and sounds menacing, and works in nicely with the neat street cruising and drag-strip action

PLOT:
Two young daydreamers fall in love but have to skip town after being accused of robbery and murder