Mat Egan is a big name in paintjobs here but he's got a growing reputation in the US too. Here's a look back at our interview with him from 2012

IT WOULD seem Mat Egan has been around forever. When it comes to wild flame jobs, crazy custom paint and fine pinstriping, there are few with a reputation as big as Mat’s. He made a pretty big impression with his XP ute, which we featured on the cover of the June/July 2000 issue. 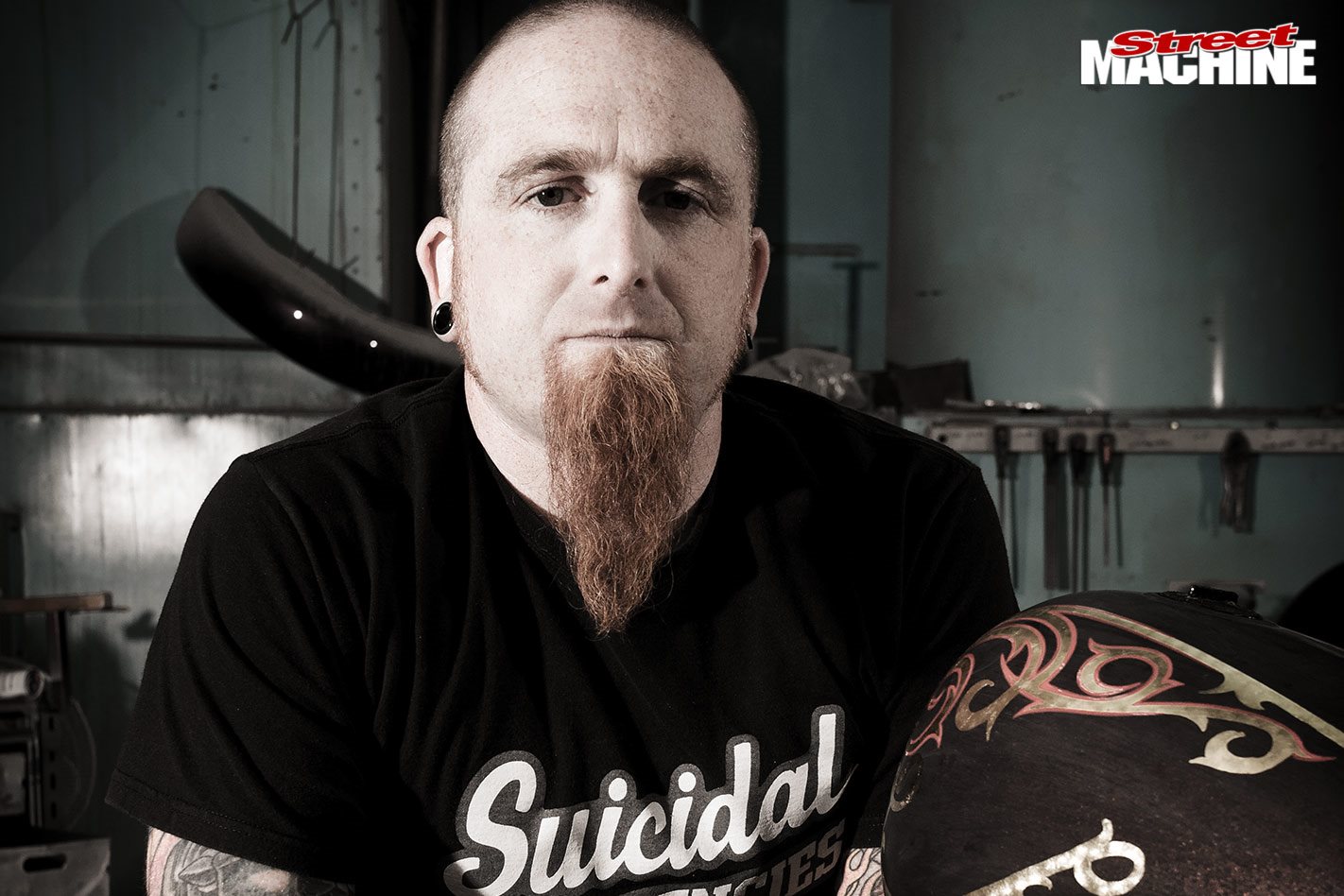 For some of you that’s ancient history — maybe for Mat too as he was only 23 years old when that car hit the scene. Back then there was little here that came close to the outrageousness of that paint job. The only place you’d come close to spotting something similar was half a world away in Southern California. Not surprisingly, Mat has made that automotive pilgrimage and has built up a bit of a profile — and earned a bit of respect — Stateside.

You’ve been a high-profile painter and pinstriper for more than a decade — how old are you now?

I turn 35 in the next couple of weeks. 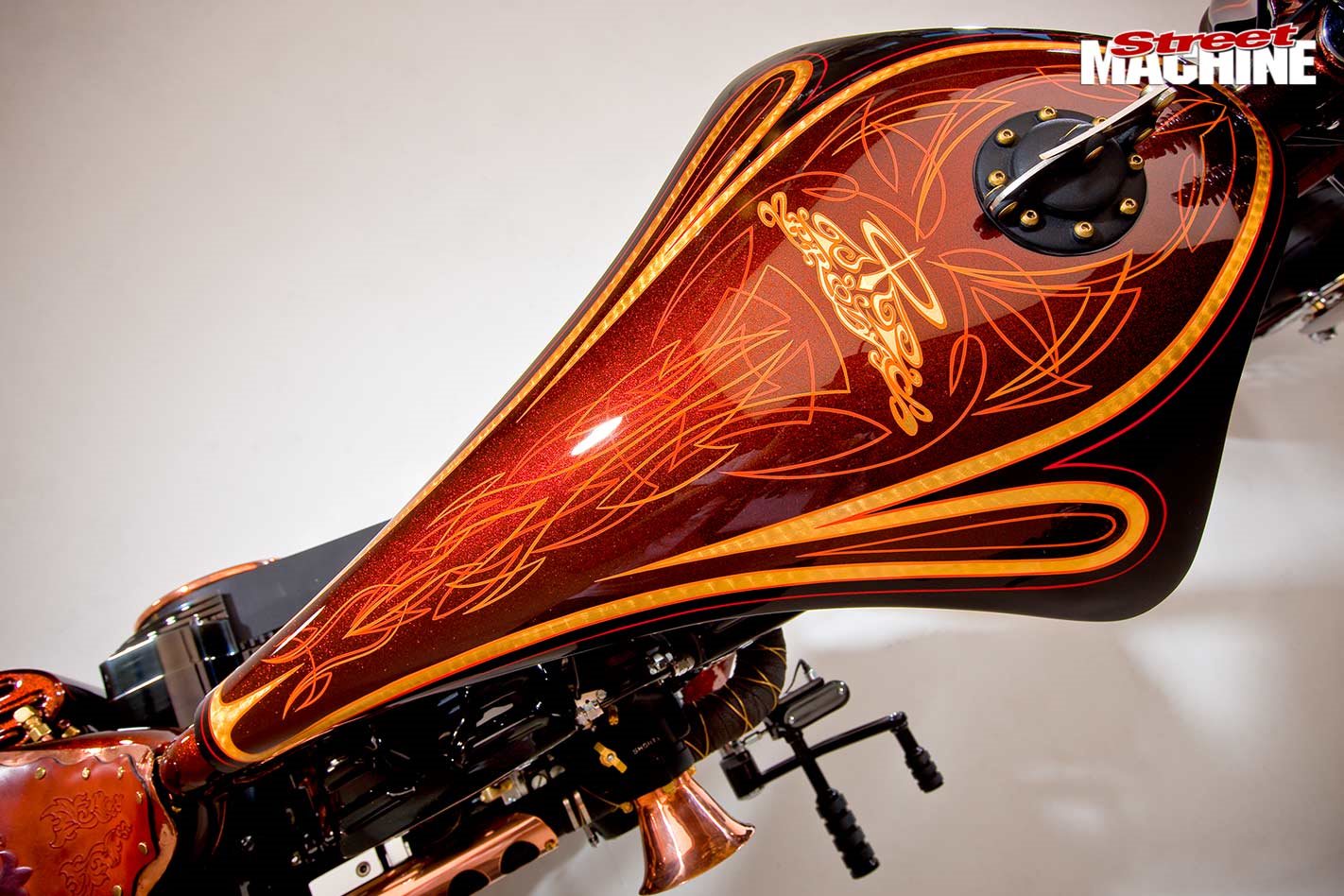 So you started pretty young. Where did that inspiration come from?

My uncle was always into cars and I grew up with muscle cars and early Falcons. I just watched him doing that stuff and started drawing cars. Thought I’d be a mechanic, just something to do with cars, but the more I was drawing, I thought: ‘Nope, get into art somehow.’ So I got a signwriting apprenticeship.

Signwriters seem to be into hot rods, like Beau Ledger and Paul Quaife in Melbourne.

I went to trade school at the same time as Quaifey. He’d just sit there drawing flames on his paper before I could draw them — I’d be thinking: ‘How can you do that so easy?’ Then I remember we all went out for morning tea one day and there was this ’32 coupe in the back laneway. We were all like: ‘Why didn’t you tell us you drove it here?’ He was like: ‘Ah whatever.’ 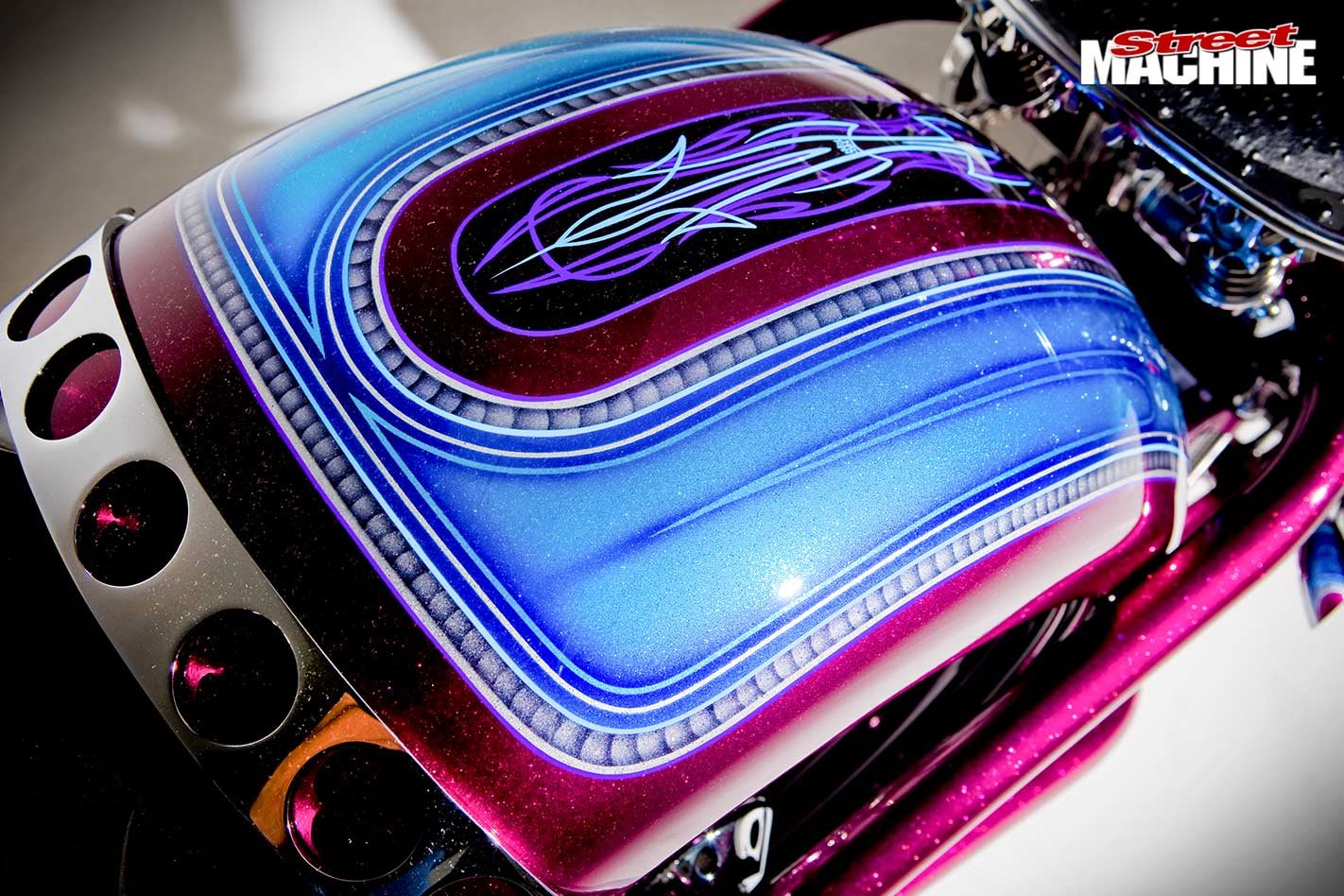 So it wasn’t until you were into your teens that you were exposed to hot rods?

I’d see them here and there but I wasn’t around them really young to know what was going on other than to see one and think: ‘Wow, look at that!’ It was probably in my early to mid-teens that I started seeing lead sleds, customs, hot rods and started getting into them as well. 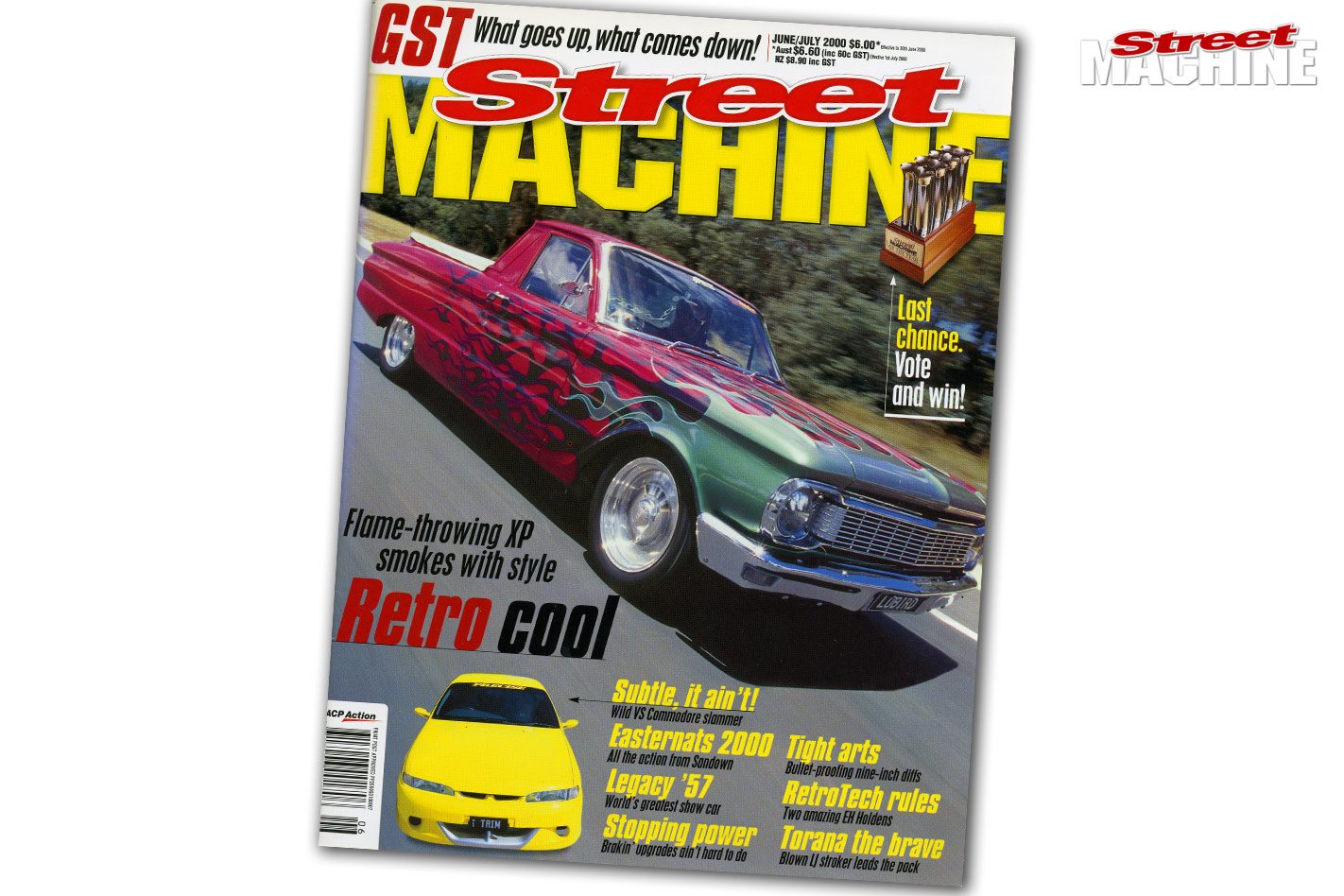 You made a bit of a name with the XP ute.

That was cool man, that was a bit of a schoolboy dream, getting on the cover of SM. When I built that ute it was silver with slotters and whitewalls, and then I thought: ‘I’ve got Extreme Designs on the tailgate and it’s not very extreme.’ It started getting humidity blisters in the paint, so I stripped it and then I got a little bit crazy and did it all in HOK Kandy Magenta and chameleon flames when they first came out.

I hit up every show I could, drove across to Adelaide and Summernats and just put business cards under my windscreen wipers and started pushing it. I got a lot of interest with it but it wasn’t until I did a couple of plain flame jobs, more hot rod-style, that I started getting the hot rod crowd wanting stuff done. 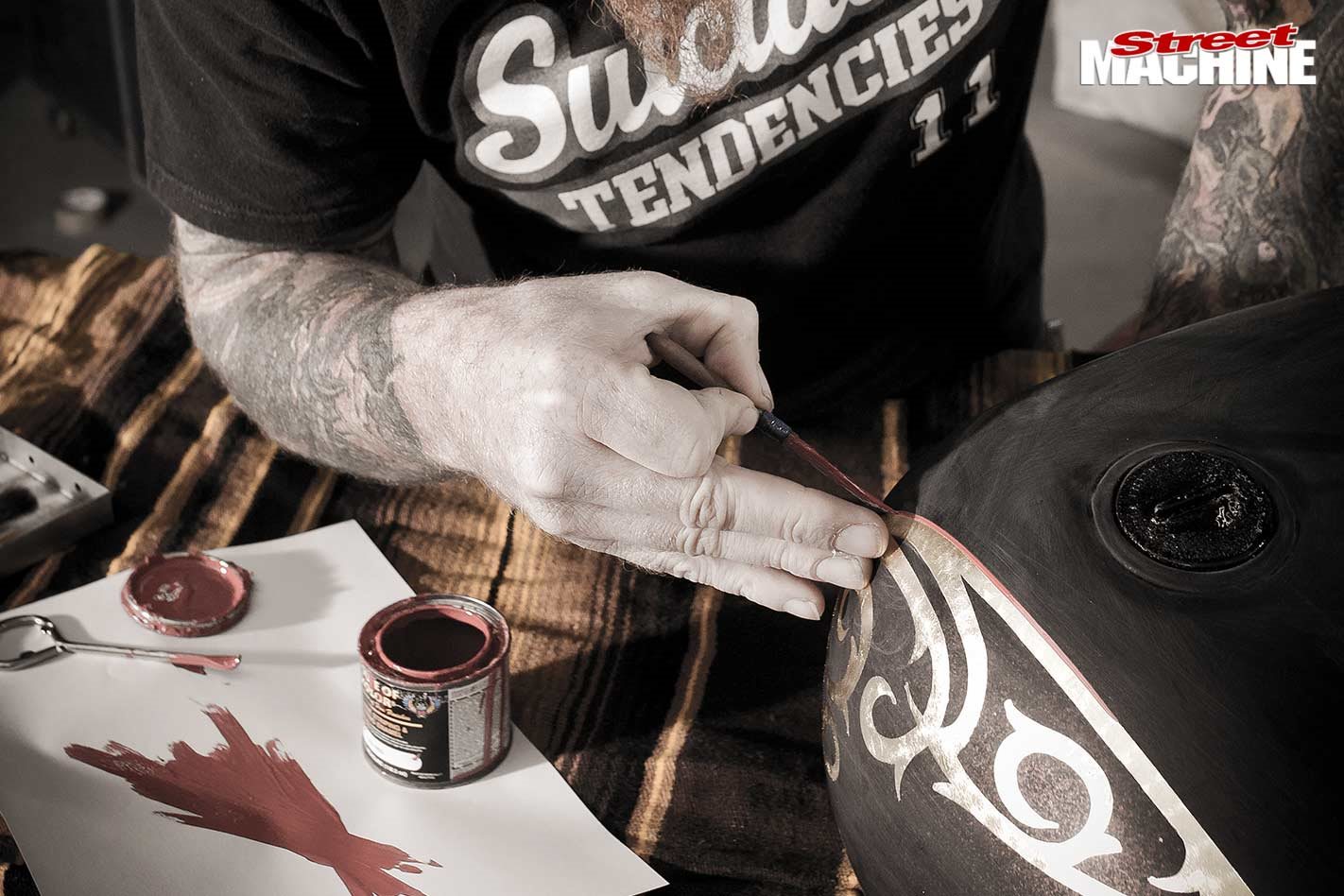 So how did you progress from signwriting apprentice to custom paint?

All the stuff I did for my apprenticeship was mask and spray, so with that and the brush work I started jamming on helmets during my lunch breaks and after hours. That turned into doing a few tanks and all of a sudden it just got busy.

So when did it become less of a side job and more of a full-time thing?

I did a pre-apprenticeship course which went for 10 weeks because I couldn’t find an apprenticeship, so I went back and did all my trade schooling in one hit — it was just brushwork every day. I got into an apprenticeship towards the end, so I only had to do three years.

Halfway through it I was already busy with my own stuff, so as soon as I finished the apprenticeship I got out and started my own business. 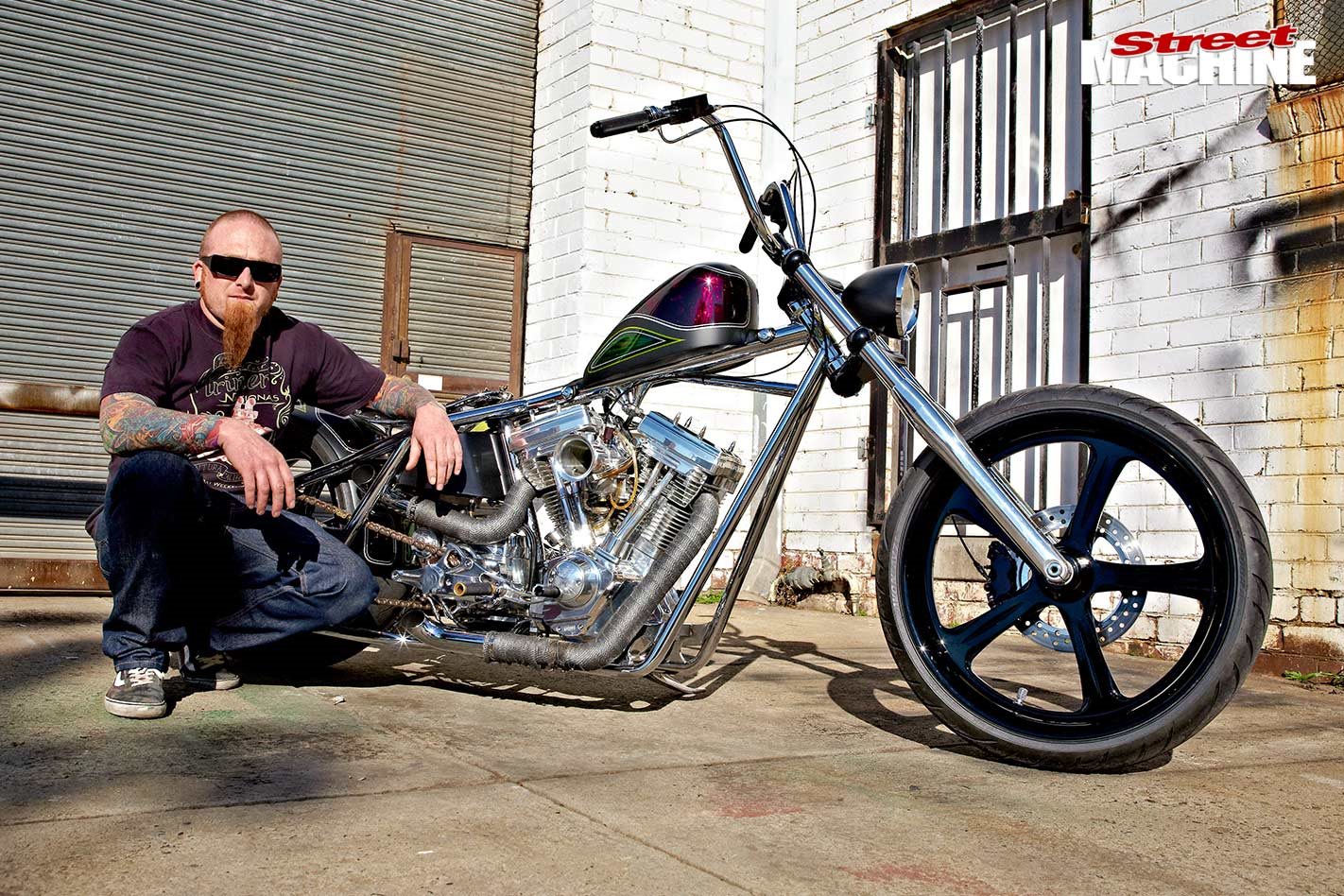 That was Extreme Designs?

Yeah. I would have been about 20 then. I still did a bit of signwriting and stuff at the time and then that blended into the custom paint and airbrushing and it kicked on from that.

Do you do full paint jobs or just lay your custom stuff on top?

I try and just do that but my own cars I’ll paint the whole job. Say if someone wants a full-on lowrider-style paintjob, I’ll get them to base it in silver and I’ll start doing the metalflake and candies. If someone has a hot rod and says: ‘I want a flame job’ I just say: ‘Alright, go and get the base colour you want and I’ll do all the artwork after that.’

It lets me concentrate on what I want to do rather than prepping a car for six months and putting base colours on it before I get to do what I do on it. 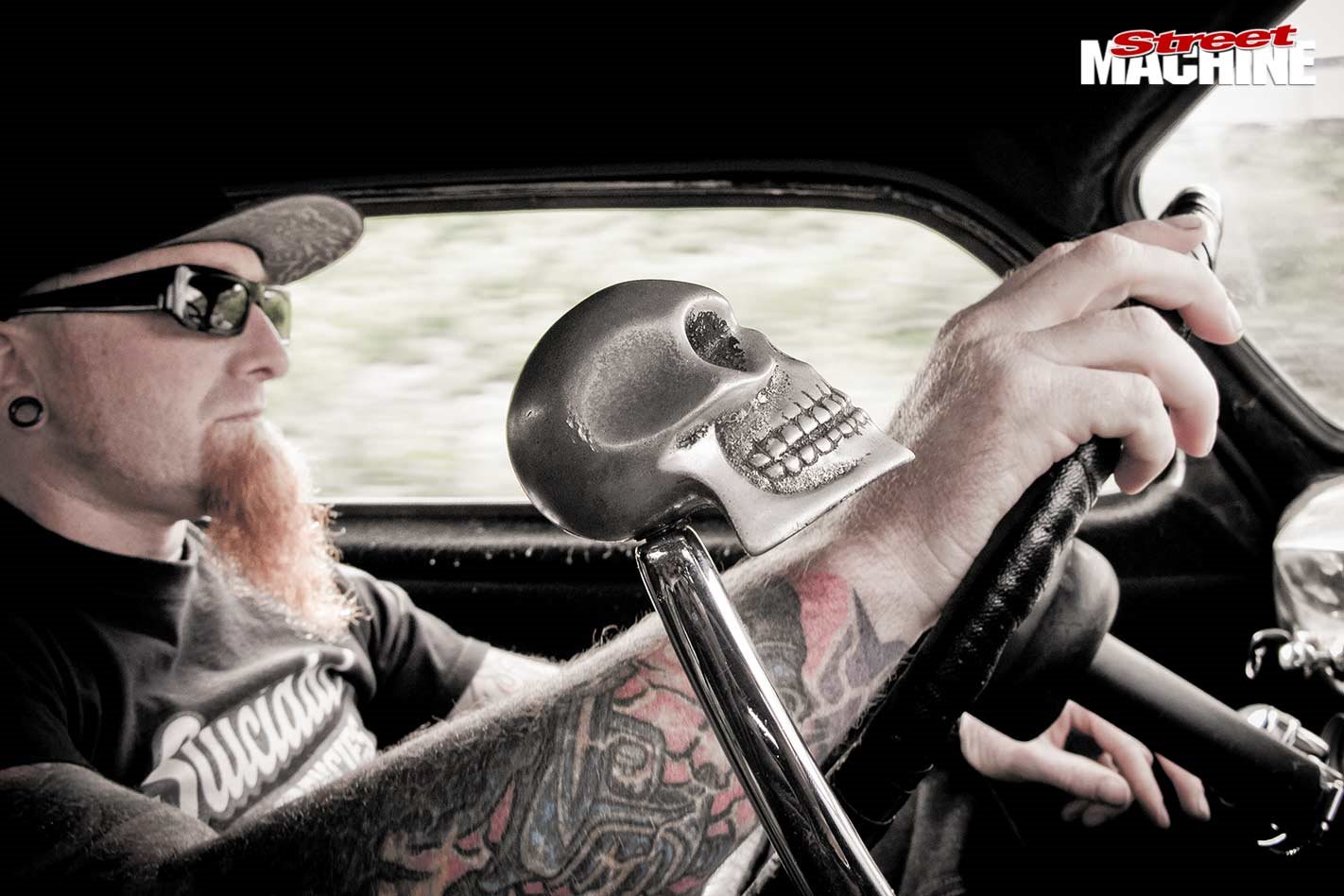 So it’s more the art than the paint?

If someone said: ‘Let’s do a $30,000 lowrider paintjob’ where I have to do it start to finish, I’d be into that but just doing the normal respray stuff, that’s a massive mission in itself just putting one colour down. I’d rather just stick to my artwork and that’s it.

Bikes and choppers have always been a big part of your work too, right?

I raced BMX for years, so before I even started my signwriting apprenticeship I used to paint all the other kids’ helmets, just with a brush and a bit of spray. That was the start of it all, I guess, I was only 12 or 13 and used model paints and brushes. 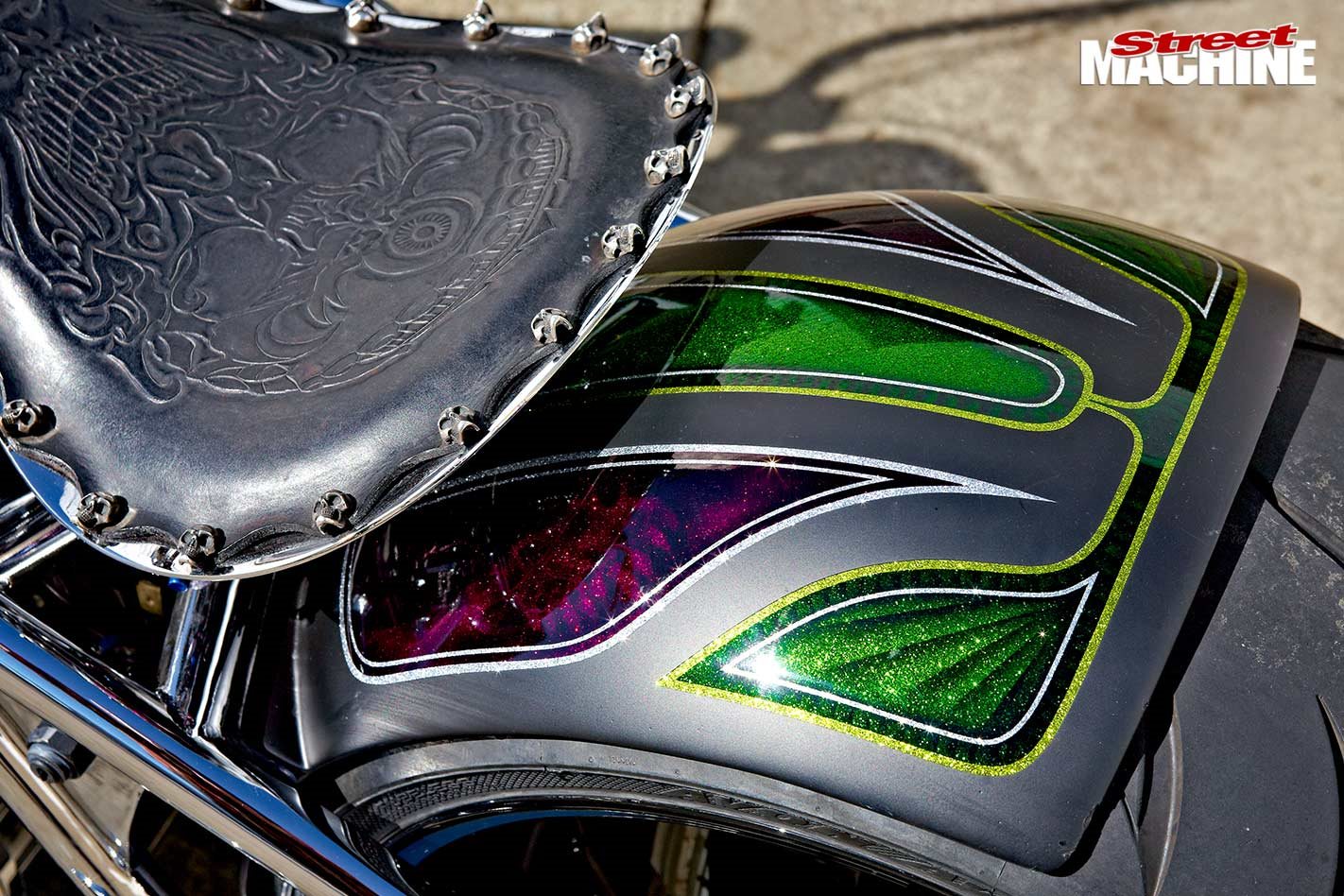 So you always had that artistic bent?

I knew I loved cars and bikes and all that. As a kid you think you’re going to be a mechanic if you’re into that. But because I was always drawing and painting, I thought I should do signwriting. I thought about going to art school because I knew I wanted to do something with art but I didn’t want to sit in a university for another four years.

Your talents have taken you to the US quite a bit.

Over here [Mat was talking on the phone from the States] all the other signwriters and custom painters, they’re all car-heads. People are getting stuff striped and getting gold-leaf lettering on drag cars, so it really mixes in. You can still be in that whole culture without having to be a welder or a
mechanic or a fabricator; you’re still part of it. 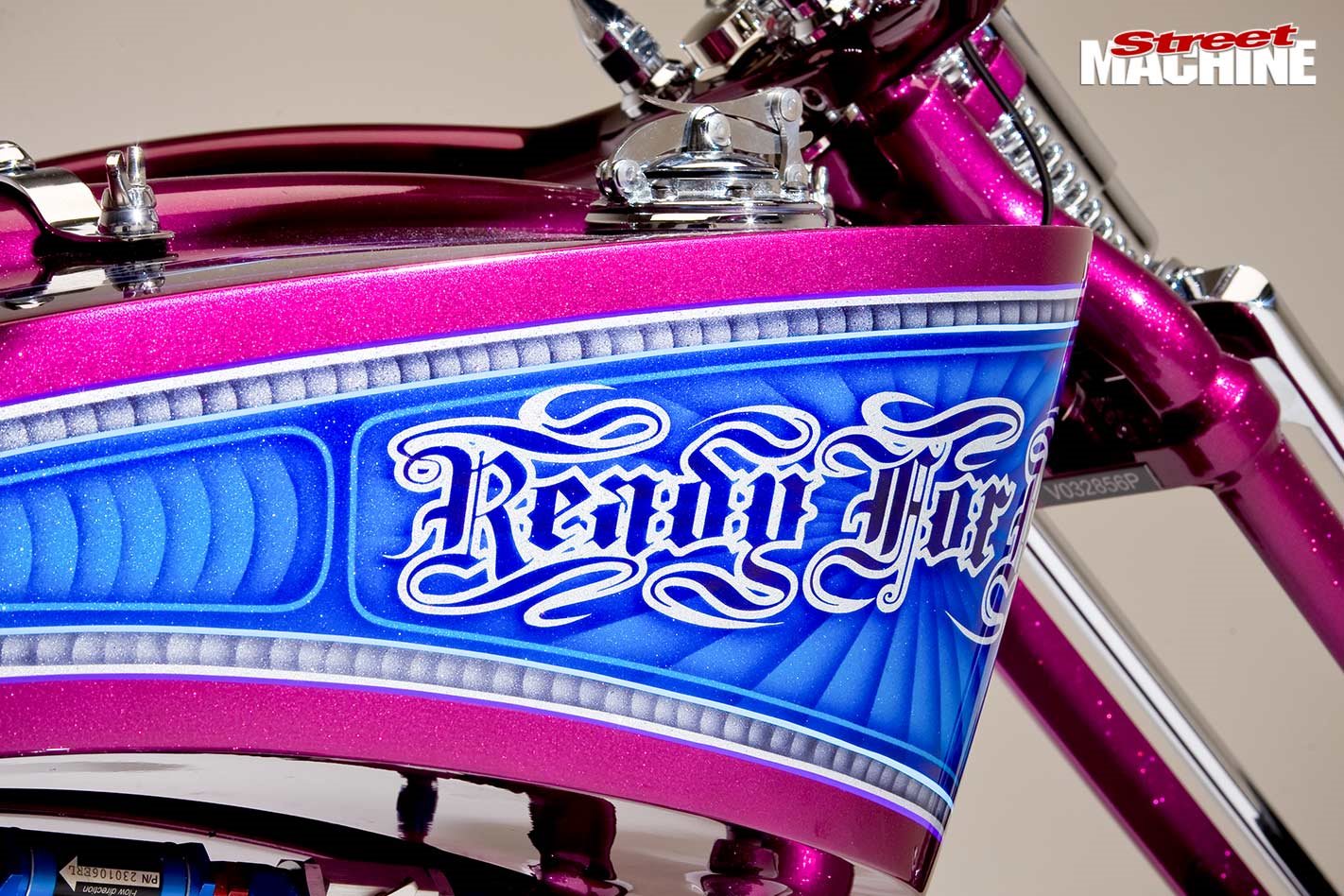 So there’s plenty of work for you to do?

I probably spend three to four months a year here, just over the [northern] summer. I just come and do a few car shows and float around, a bit of networking. It’s good to get back and forth and escape the Melbourne winter.

That’s one of the other reasons I came to the US, to push the iPad app I made. Hopefully that can create a bit of a silent income so I can paint what I need to paint, or what I want to paint.

Are you a closet computer geek?

I came up with the idea and got a computer dude to do the coding and now I’m talking with a couple of other magazine guys over here to introduce tattoo flash to it, and different designs. 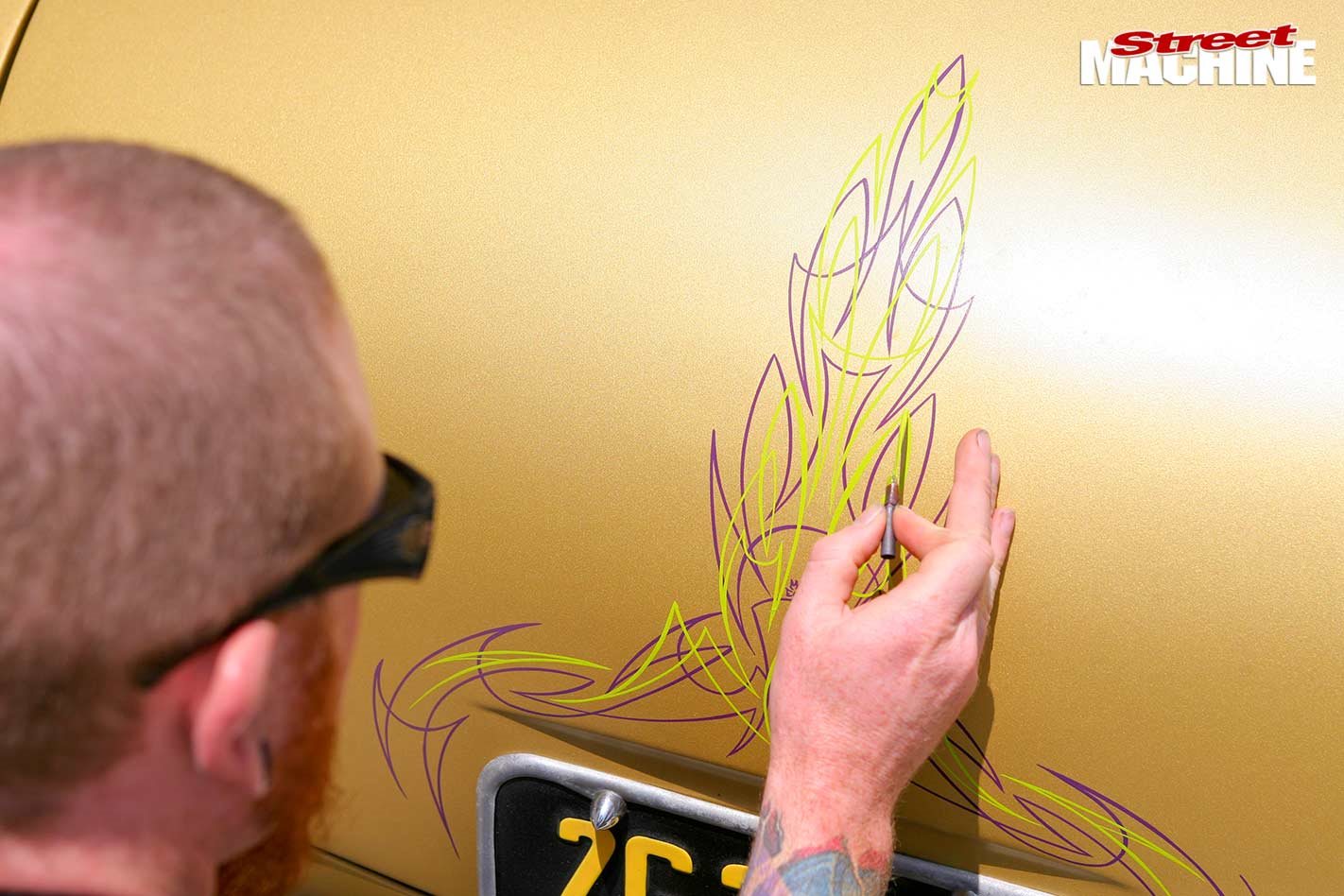 Getting back to cars, your current ride is pretty cool and distinctive with its bare metal roof.

When I bought it, it had a bare metal roof anyway, and flat blue everywhere else. It got a bit rusty — I should have sealed it before we shipped it. We cleaned it up and just looking at it a bit more we noticed a few things weren’t quite right.

The guy I share the factory with is a really good beater and Ahron Jeffree was helping him out. He tapped it up so that there was a bit more shape around the rear window and had to re-weld a few welds. The shape and the flow of the chop is how I bought it, but where the roof meets the window can go a bit flat sometimes, so they got it really nice. 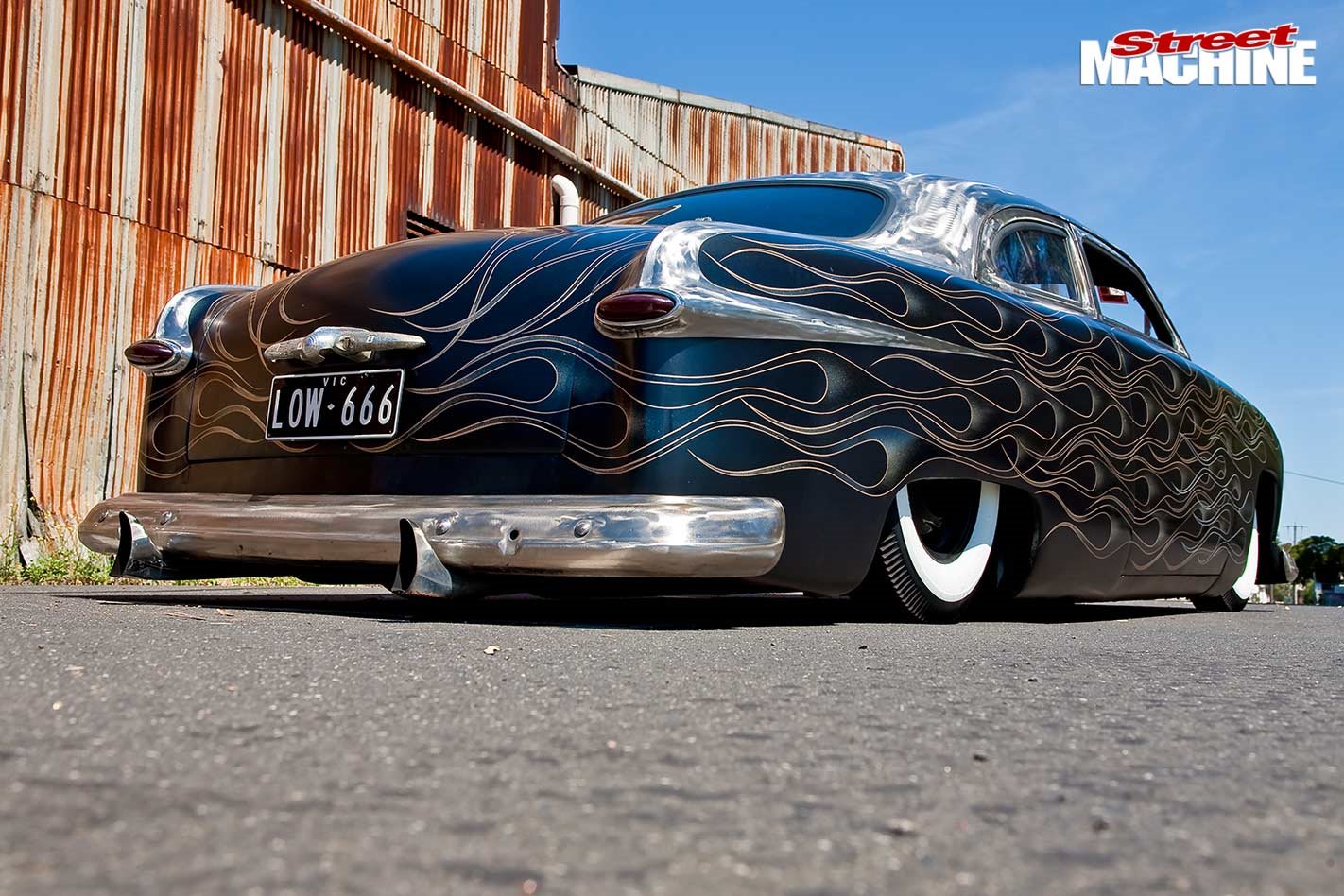 Mat’s Ford single spinner already had a naked roof when he got it, which was all the inspiration he needed to turn it into this demon

So it wasn’t that the whole roof was shaped from bog and you had to grind it all out?

Nah, nah, there are plenty of those kinds of roof chops around, though!

More recently you’ve also been applying your art to a more organic canvas.

For the past six months or so I’ve been tattooing as well. I’ve just been slowly getting into it. I love doing it but it’s one of those things you’ve really got to dedicate a bunch of time to and be persistent with. 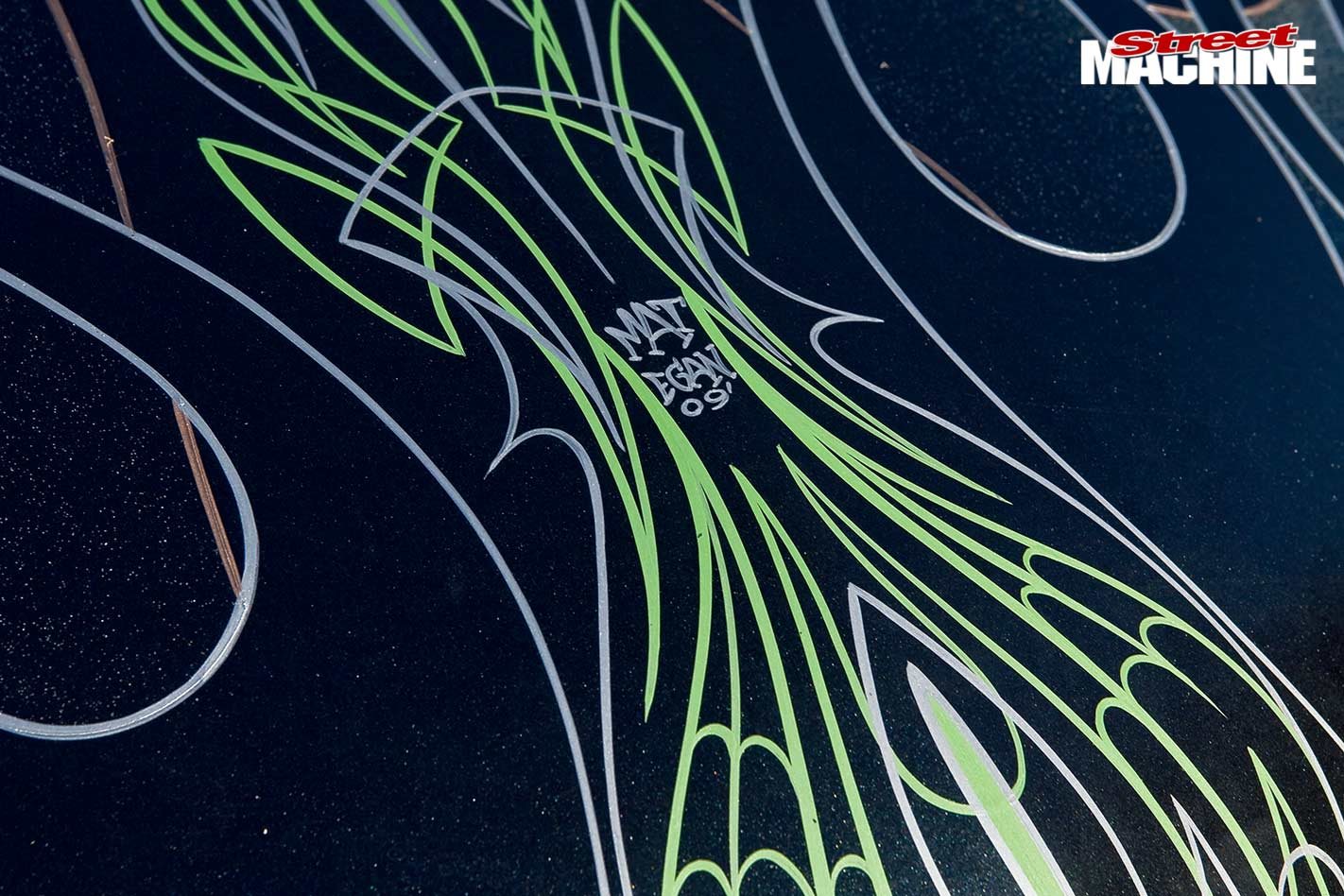 So have you been practising your skills on your inner thighs?

Nah, none of that — I just jumped straight on my mates. I’m working out of a shop. I didn’t want to be just another backyard dude whose friend bought him an eBay tattoo gun because he could draw. I work under the guidance of other artists.

What style of tattooing. Is it a kustom kulture style like your paintwork?

Not really yet, I’m just doing a bit of everything. Whatever dudes want.

So, Southern Crosses are your specialty?

[Laughs] Nah, haven’t had to do that!