FAMILY and friends are often important influences when it comes to what ride you choose to build. 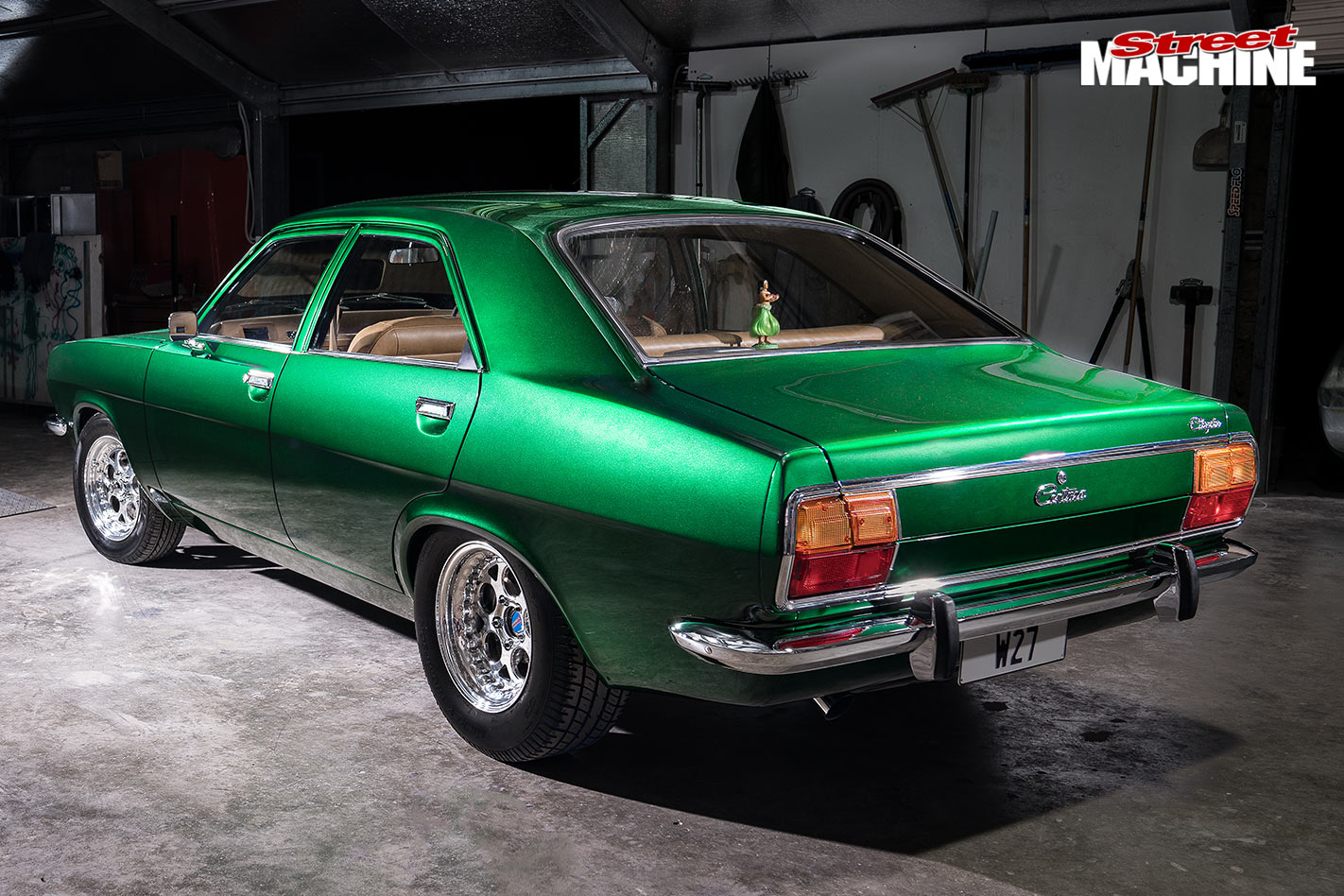 How often do you hear about folks building a particular car because ‘my parents had one’ or ‘my brother’s mate took us to school in one’, or – my personal favourite – ‘the guy up the road used to drop massive burnouts in one’. These core influences at an impressionable age can forge a lasting affinity with a certain make and/or model, irrespective of popularity; how else do you explain Renault or Austin Kimberley enthusiasts?

Take 31-year-old Charlie Beatty, for example. His grandparents, Alan and Joan, spent many a day ferrying around a young Charlie in their pride and joy, a dark green KB Chrysler Centura, and he was smitten for life. 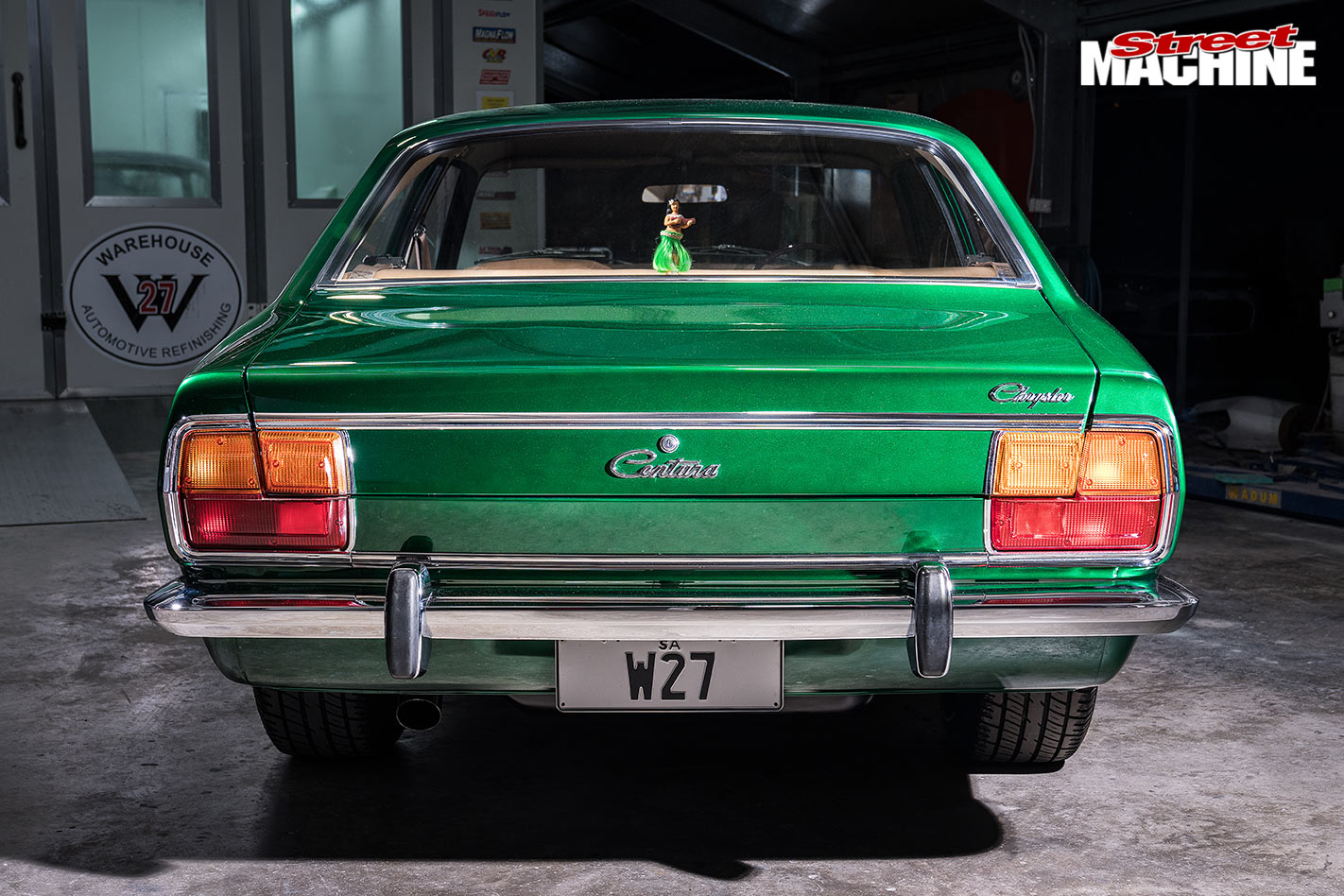 “My grandfather taught me all about mechanics and inspired me to get into the trade,” Charlie remembers. “I friggin’ loved that car, but back in 2004 when it went up for sale I just flat-out couldn’t afford it – I was a first-year apprentice heavy diesel mechanic so spare cash was non-existent. But I never forgot that car and was intent on owning one.” 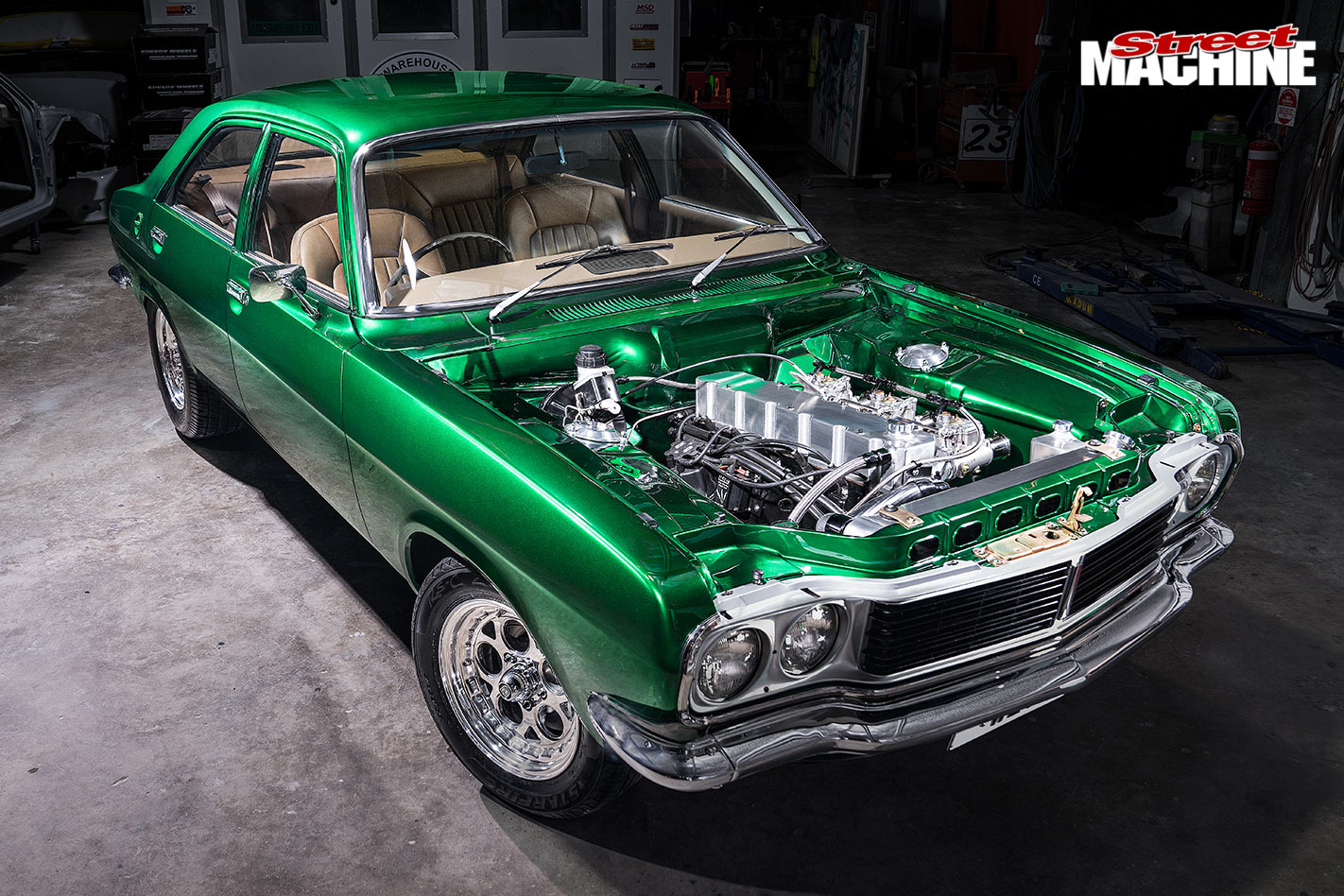 Hemi-sixes and Webers are a legendary combination locked into folklore by the Aussie R/T Chargers. Charlie's home-built 265 uses triple 48mm carbs in lieu of the factory-spec 45mm jobs, and pumps out a healthy 338hp

It’d be another decade before that dream became a reality, and it wasn’t due to a lack of interest, more a lack of hometown presence. “I spent a few years working overseas and in remote areas, which left little time for building cars,” Charlie explains. “But I finally bit the bullet when I bought this KB off a mate back in 2013. He’d started disassembling it and it was a non-runner, which was a catalyst for how the body and finish became what it is; if it was still complete back then I would be tearing around in an average-looking Pampas Green Centura with a stout Hemi swapped in!”

And speaking of stout Hemi sixes, those triple Webers hanging off the side will be enough to warm even a devout bent-eight lover’s heart. They were part of the plan from the get-go, but more on these pleasure triplets later. 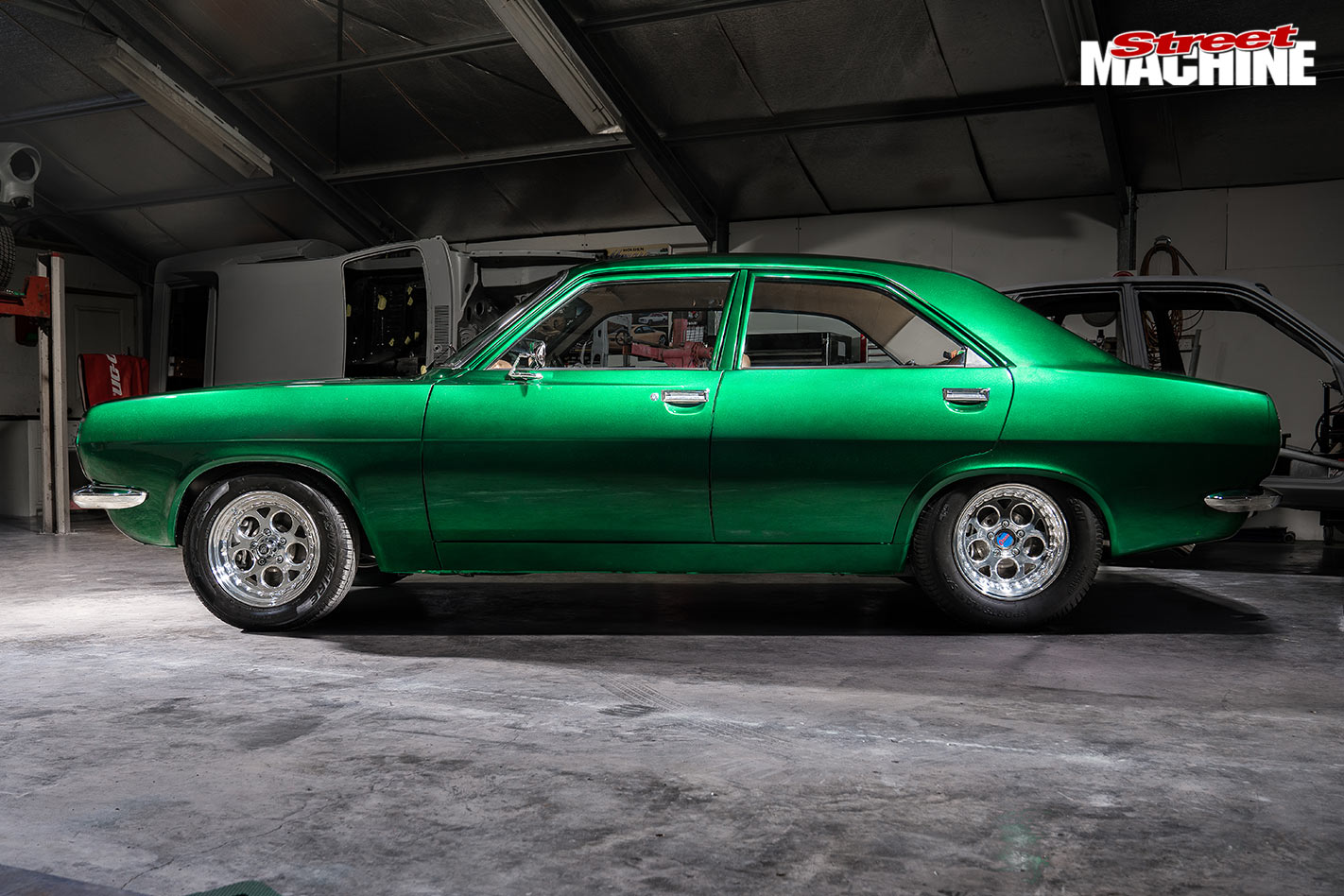 The gunbarrel-straight bodywork on Charlie's Centura was treated to Planet Green with a green Kandy overlay from the House of Kolor range, perfectly complemented by refurbished chrome and Center Line Convo Rev rims

“I set myself a $15K budget, which included the 265 transplant along with a quick respray in red and a thorough scrub of the original interior,” Charlie says. “But then I met Travis Flaherty from Warehouse 27 in Seaford, and well, he kept filling my head with ideas. We decided to step up the quality and finish of every aspect of the car, and it snowballed.”

Charlie got busy stripping the Cennie bare and mounting it onto a rotisserie to properly attack the body and undercarriage. “It needed one lower door skin and a couple of tiny spots zipped up in the engine bay and undercarriage to make it 100 per cent,” he explains. “It was near-mint; it was a shame it wasn’t a Charger – I would’ve been sitting on a goldmine! Bare-metalling the shell revealed all the inherent wobbly panel pressings offered up from the Chrysler factory, and they’re pretty thin too, so you sure as hell would never sandblast a panel.” 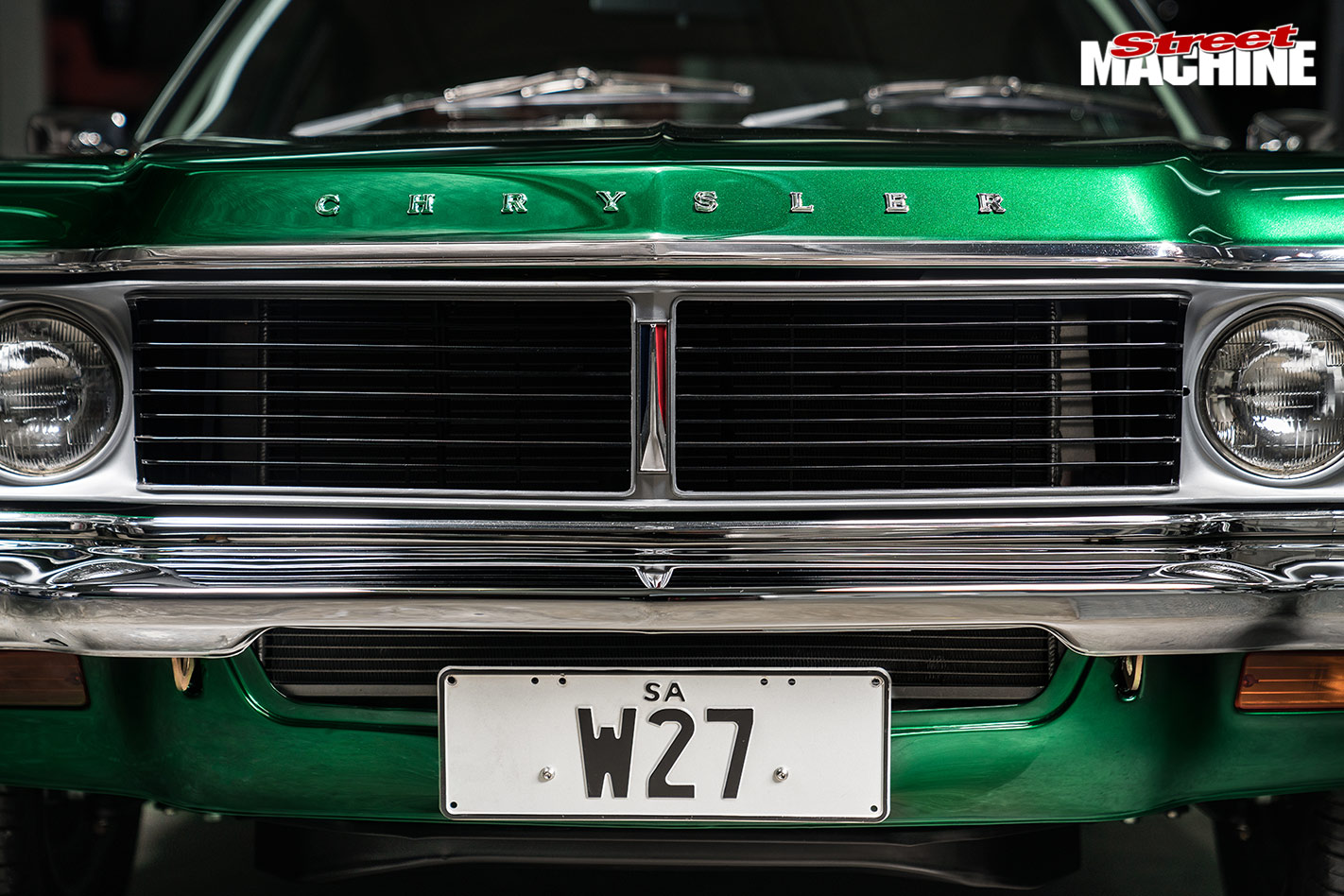 The Centura has one of the most attractive frontal styling treatments of all Aussie Chryslers; the pronounced nose was necessary to allow the local engineers to stuff the Simca-based four-cylinder body full of straight-six Hemi goodness

I’m a huge fan of Centuras, but let’s be honest, they were a terribly built car. Chrysler Australia, true to the local tradition of stuffing big donks into small cars, pretty much just extended the nose and front rails of a four-popper Euro Simca 180 to stuff in a big six-cylinder, and created a nose-heavy and flimsy straight-line weapon that handled like a wet noodle.

Charlie’s plan of attack called for some Viagra-spec stiffening to the body and undercarriage, with stitch-welding of all spot-welded seams, and beefed-up shock mounts and suspension pick-up points. The whole shebang is tied together with a set of decent chassis connectors, turning a formerly loose unit into a fun, nice-handling car for all occasions. 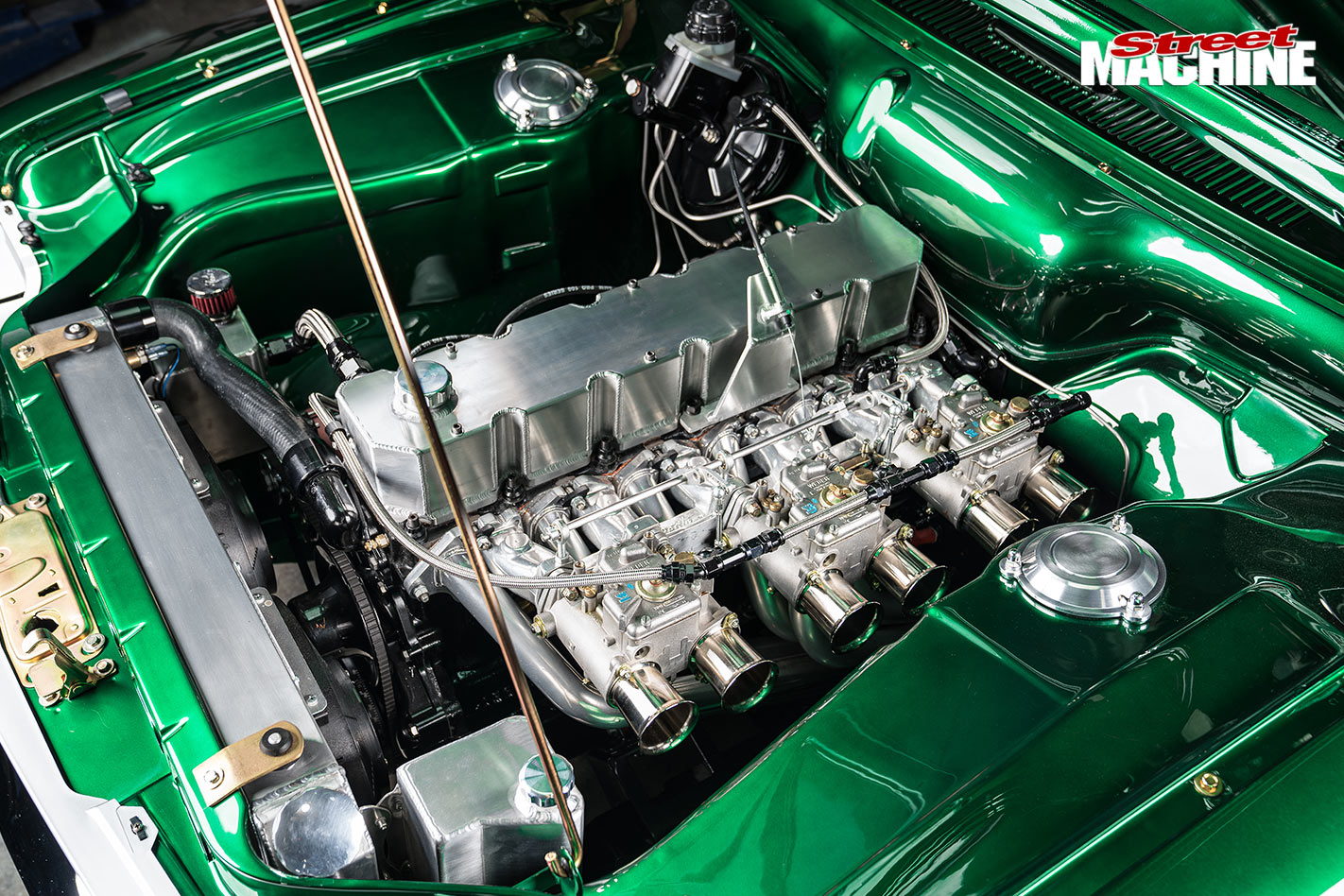 To make best use of this newfound rigidity, Charlie chose not to rewrite the engineering book but refine the factory steering, brakes and suspension. Suspension Concepts supplied the front coil-over strut assemblies, while the rear factory four-link relies on adjustable control arms along with Pedders springs and shocks for improved ride height and handling.

The standard Centura rack-and-pinion steering was retained, albeit thoroughly refurbished, and the brakes scored an upgrade to BA Falcon discs front and rear. 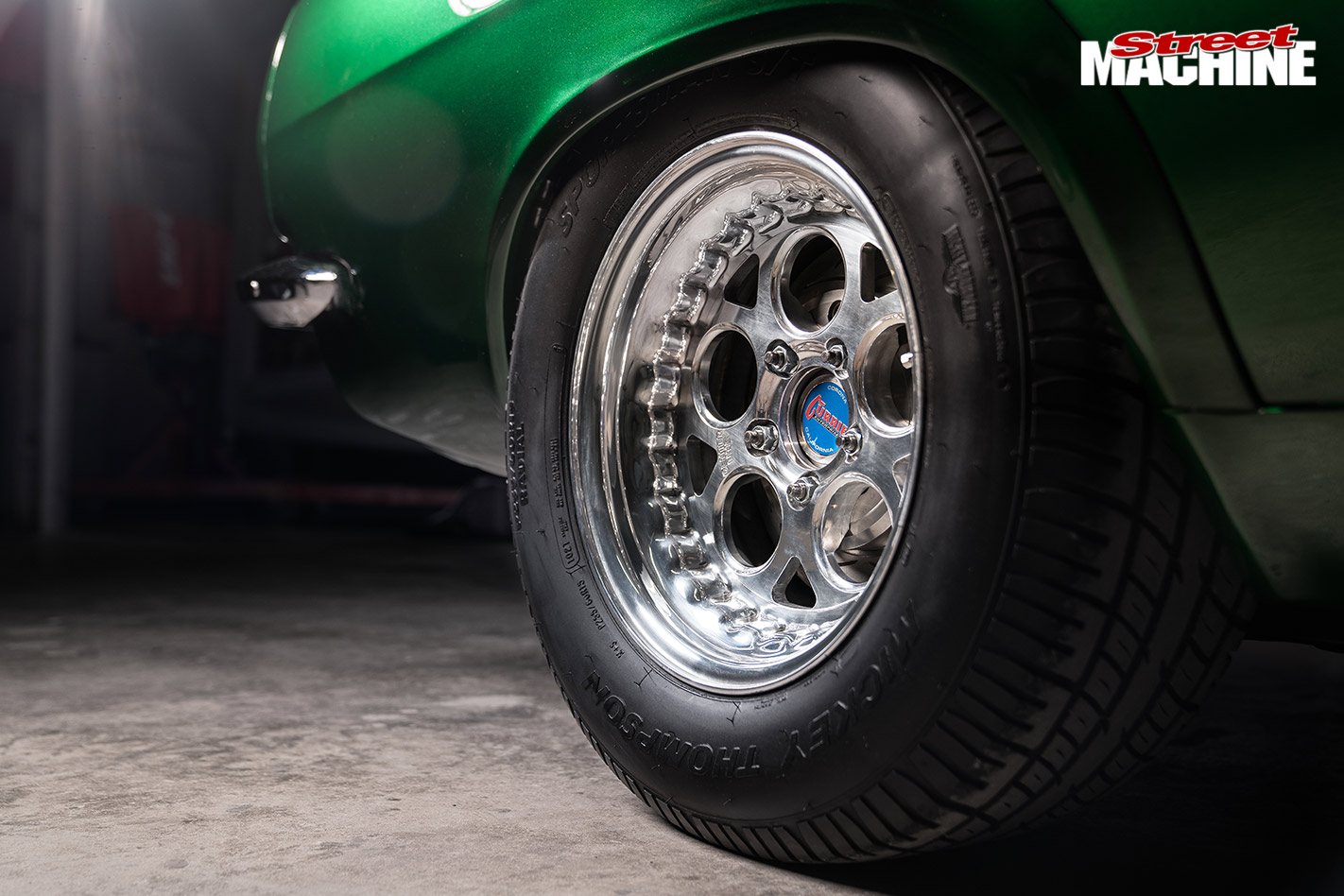 The BorgWarner diff remains intact, but it was shortened by Robbie at RMF for good measure and filled with a Truetrac centre and 3.45 gears along with 28-spline Currie axles.

Charlie then jammed the factory tubs with 15x8in Center Line Convo Rev rims mounting 255/60 M/T Sportsman rubber, which, combined with a generous lop to the ride height, seriously fattens the Centura’s rear. Matching 15x6in wheels were chosen up front along with Nankang 195/65 rubber. 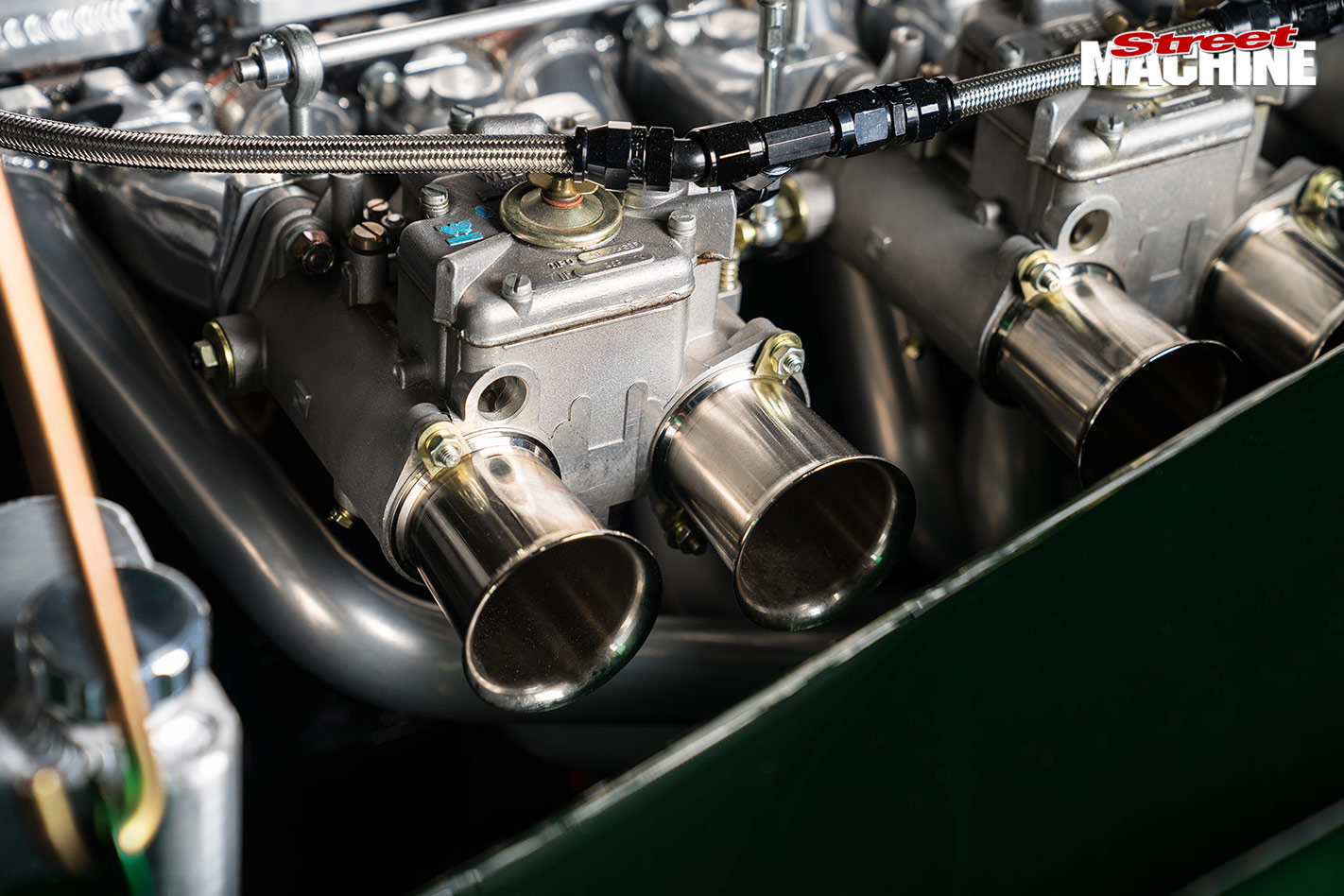 With the fabrication work and mock-up sorted, Travis and Charlie turned their attentions to prepping the body for paint, shaving any superfluous exterior trim and straightening the shell to within an inch of its life. “I didn’t realise just how good it was turning out, which meant that everything else had to be stepped up,” Charlie says. “We redid the engine bay three times, but it was worth the effort; there’s no point elite-finishing the crust of dog poo when it’s still shit underneath.”

When it came time to lay down some colour, Charlie’s initial plan for red had fallen by the wayside: “By that stage Chris Carter had finished his awesome red V8 version (SM, May ’14) so I decided to go with something different. It’s not an XY or a Torana – the Centura community is too small for there to be similar cars. I was originally thinking Poison Ivy green, but we did a few spray-outs and it didn’t suit; Owen Webb came to the party and suggested HOK Planet Green as a base with an Organic Kandy overlay, which nailed it.” 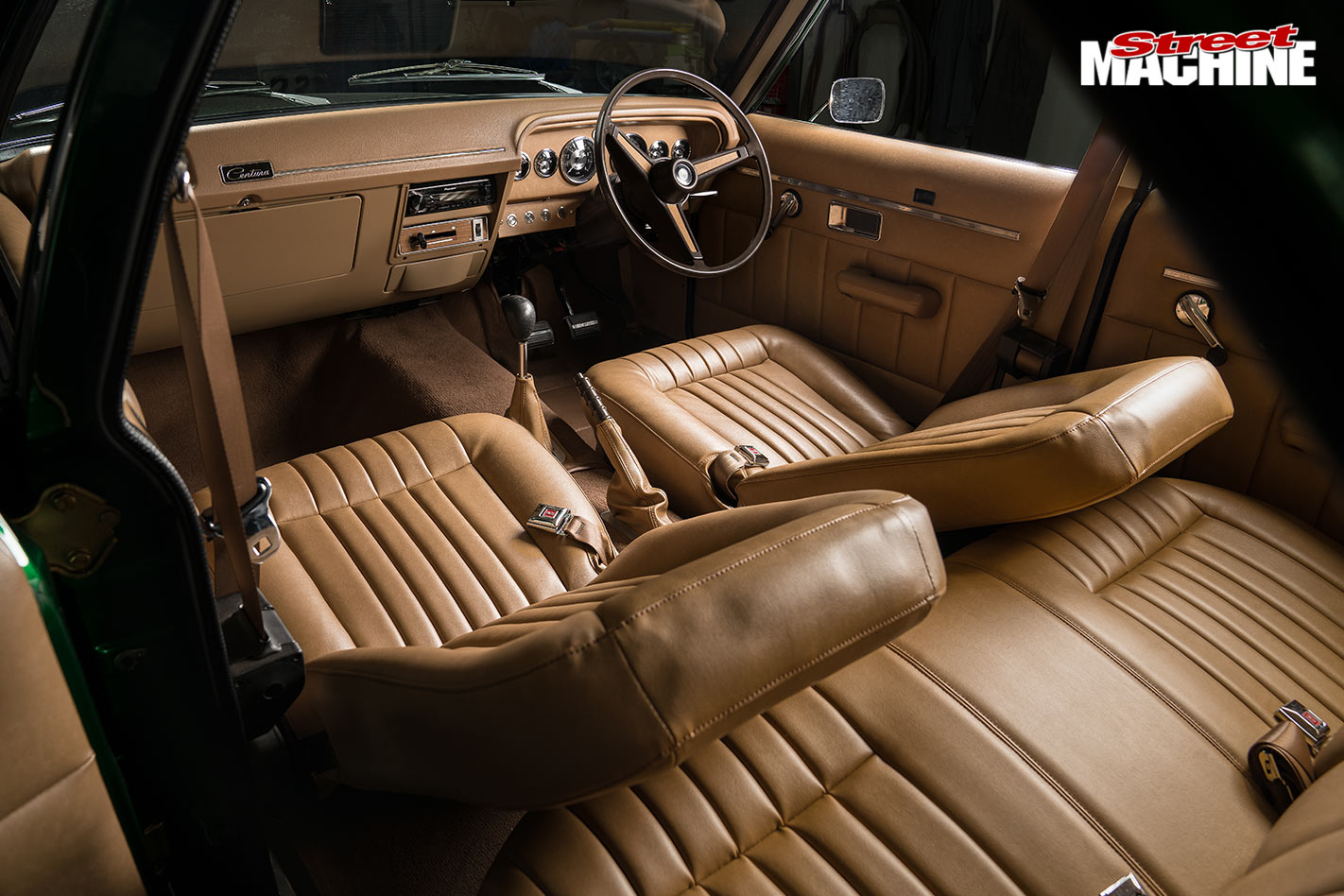 The interior is a refined version of the factory layout, reupholstered in Camel vinyl. Charlie removed the headrests from the original front buckets

In the meantime, Charlie had been busy screwing together a punchy yet streetable Hemi-six combo, filling a 60-over block with a balanced crank and rod assembly topped with SRP forged pistons. A Clive solid cam was selected with heavy breathing in mind, and a cast head was ported and hung with a trio of 48mm Webers and Hurricane headers, the latter whisking the exhaust away through a mandrel-bent 2.5-inch single system. 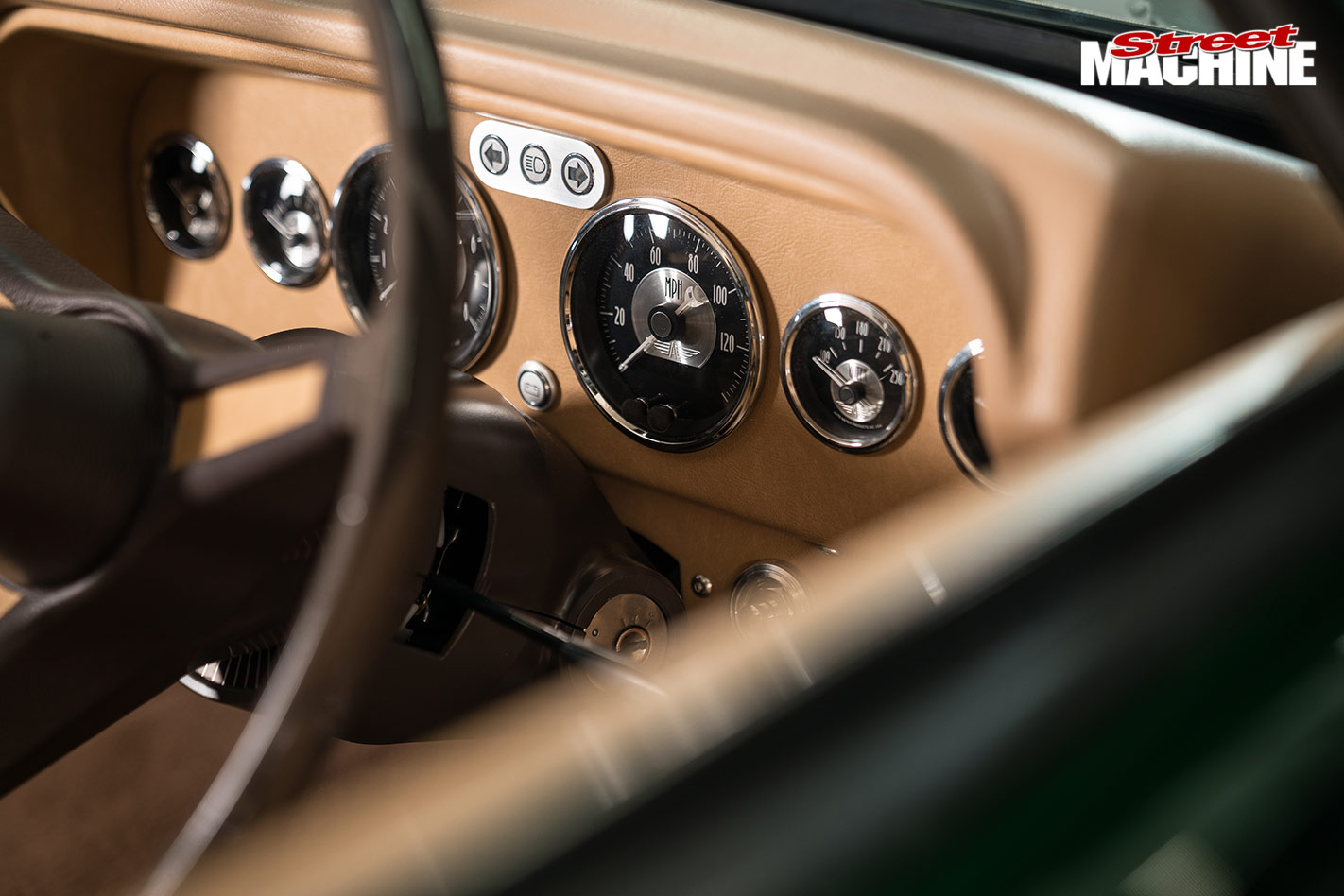 Charlie went to town redesigning the original dash and gauge cluster to house a brace of Auto Meter gauges and a GPS speedo. The multiple gangly left arms usually found on a Centura steering column were replaced by a HiLux combination switch

A billet flywheel and NPC clutch transfer the grunt through a rebuilt single-rail four-speed, and a Powerhouse three-inch chrome-moly tailshaft leaves nothing to chance when Charlie gives it the berries.

Inside, Charlie elected to refine and neaten the original Centura layout. The front-pew headrests were decapitated, and the dash, steering column and gauge cluster are markedly neater than the factory ‘fondue set’ mix of stalks and pots. Instead, an ’86 HiLux was robbed of its combination switch to move these functions to their correct, non-LHD side of the column, while a selection of Auto Meter gauges and a Black Diamond GPS speedo assembly provide form and function. Adam of AJ Trim reupholstered the seats and adjacent surfaces in Camel vinyl, matched with Ginger carpet and colour-coded paint for the remaining areas. 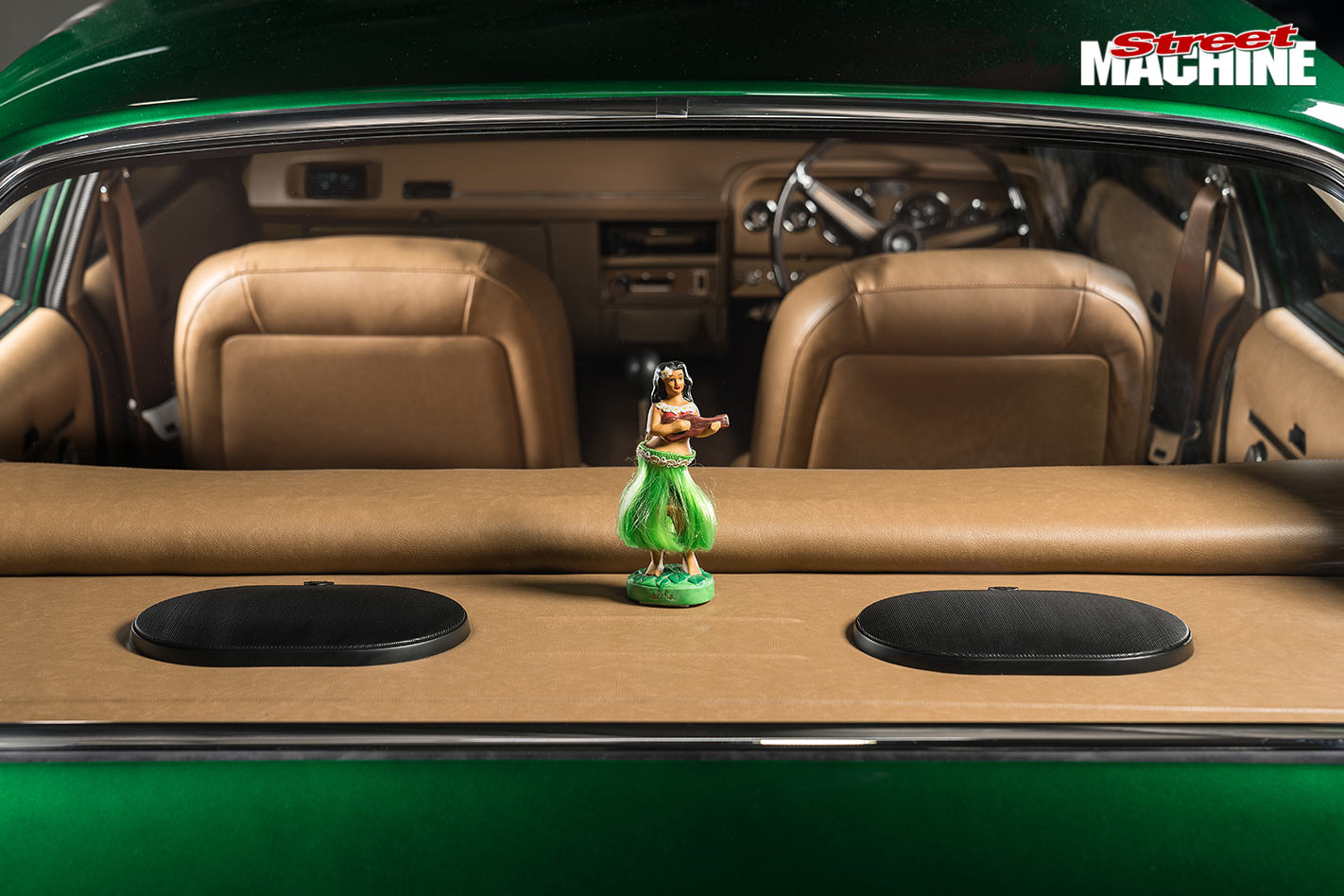 The pressure was on in the lead-up to the 2017 Adelaide Auto Expo for more than one reason (see breakout, p65), but now that’s done and dusted, all Charlie wants to do is get out and enjoy the fruits of his hard yakka. “I’ve already chalked up a few hundred kays of street driving, but would love to get it out to a track day and open it right up,” he says. “It drives really well and has plenty of power, so I’m happy.” 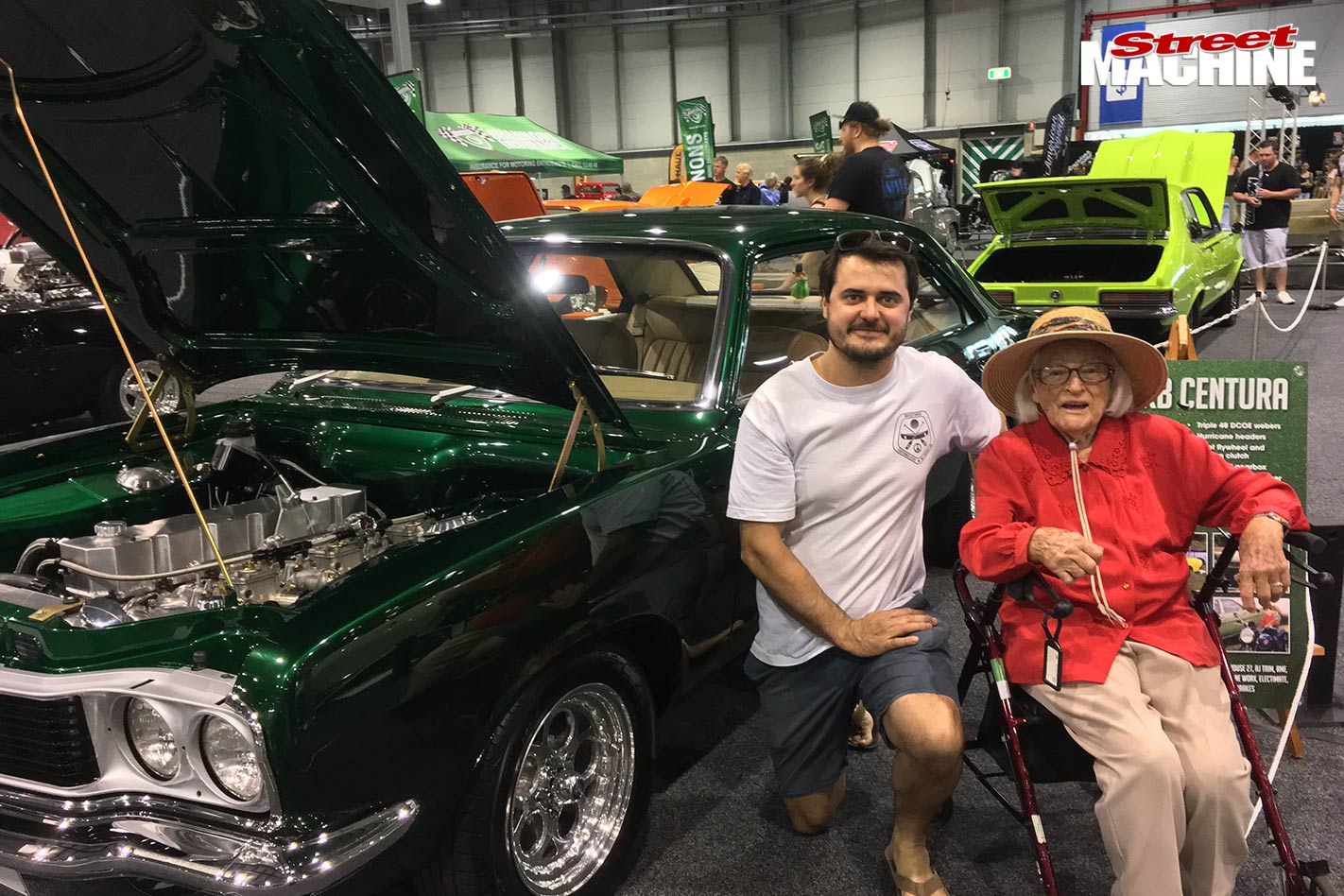 Charlie's grandparents, Alan and Joan Beatty, were the driving force behind his passion for Centuras. “My grandfather passed away in 2011, but my grandma has followed the build from the very start,” he says. “She has been the symbol of both history and inspiration for me to get the project finished, and I’ve dedicated the build to her. Even at 93, she made her way down to the Adelaide Auto Expo and was the first person to see the car on show.”

Fitting the hula girl was a final detail for Charlie as he raced to finish the car the morning of the show: “This same hula girl spent its life on the parcel shelf of my grandparents’ Centura and was found by my uncle Box six months ago when he was cleaning up my grandpa’s old shed. When my grandma saw it and recognised it, you could have heard a pin drop – it was an emotional moment.” 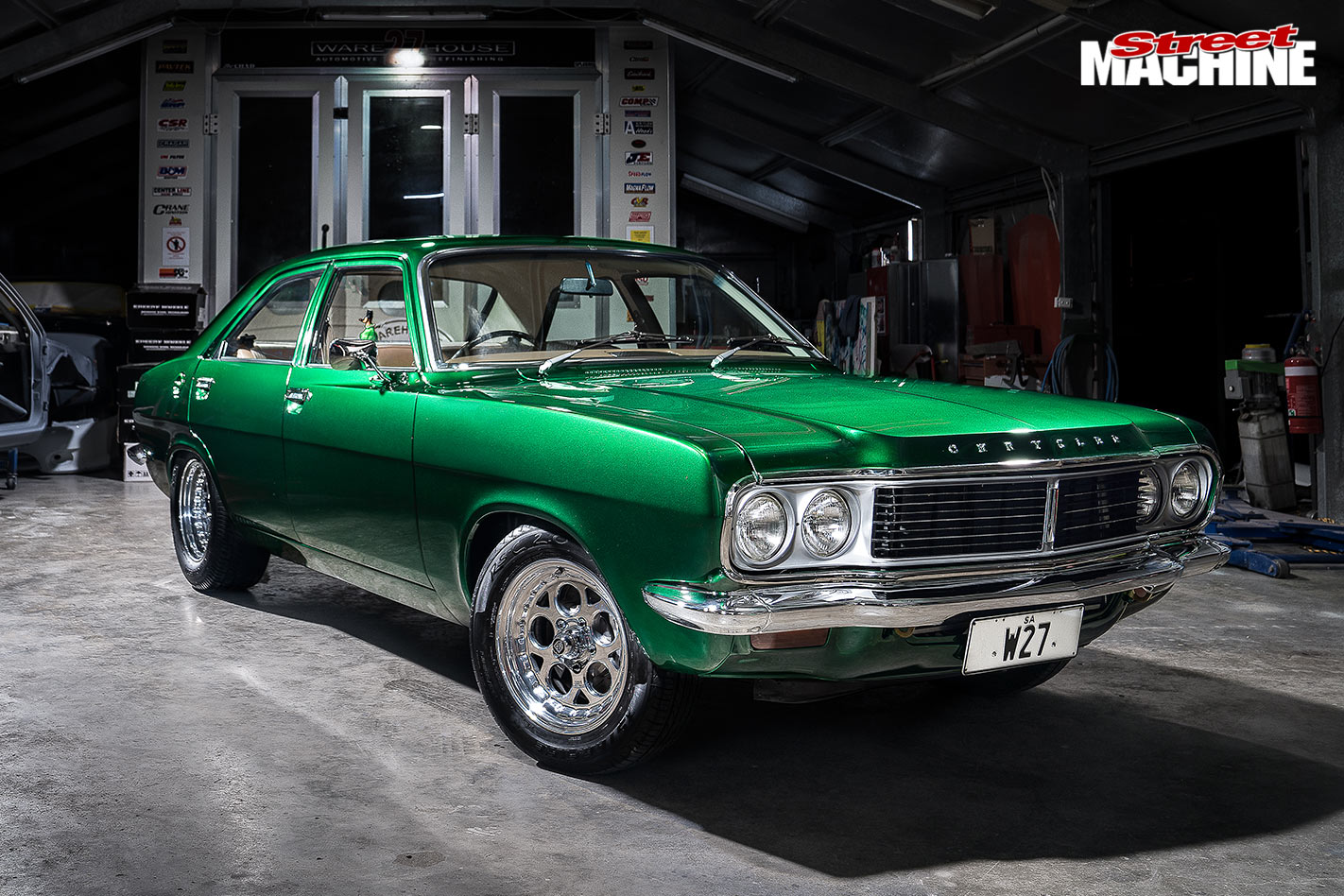 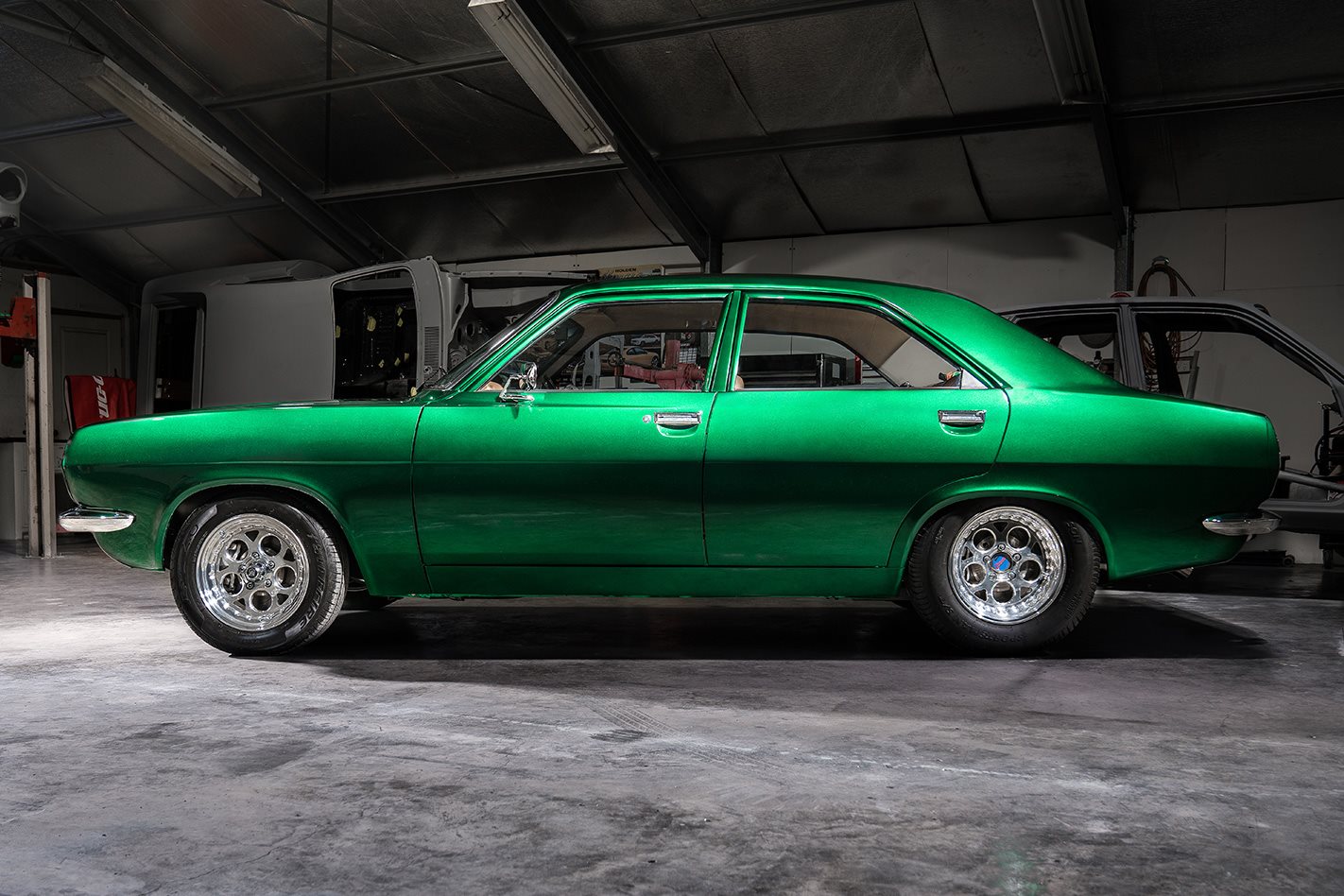 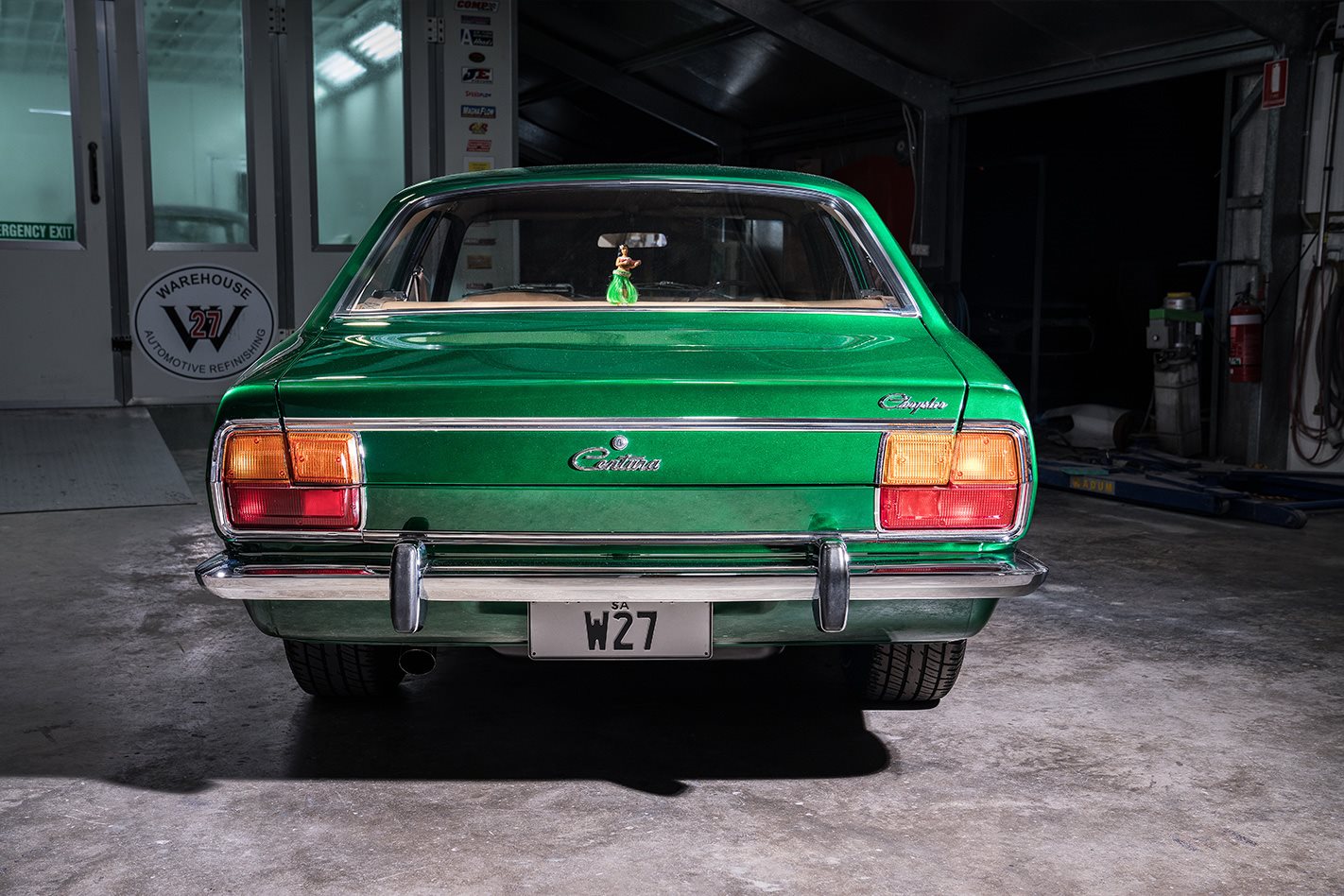 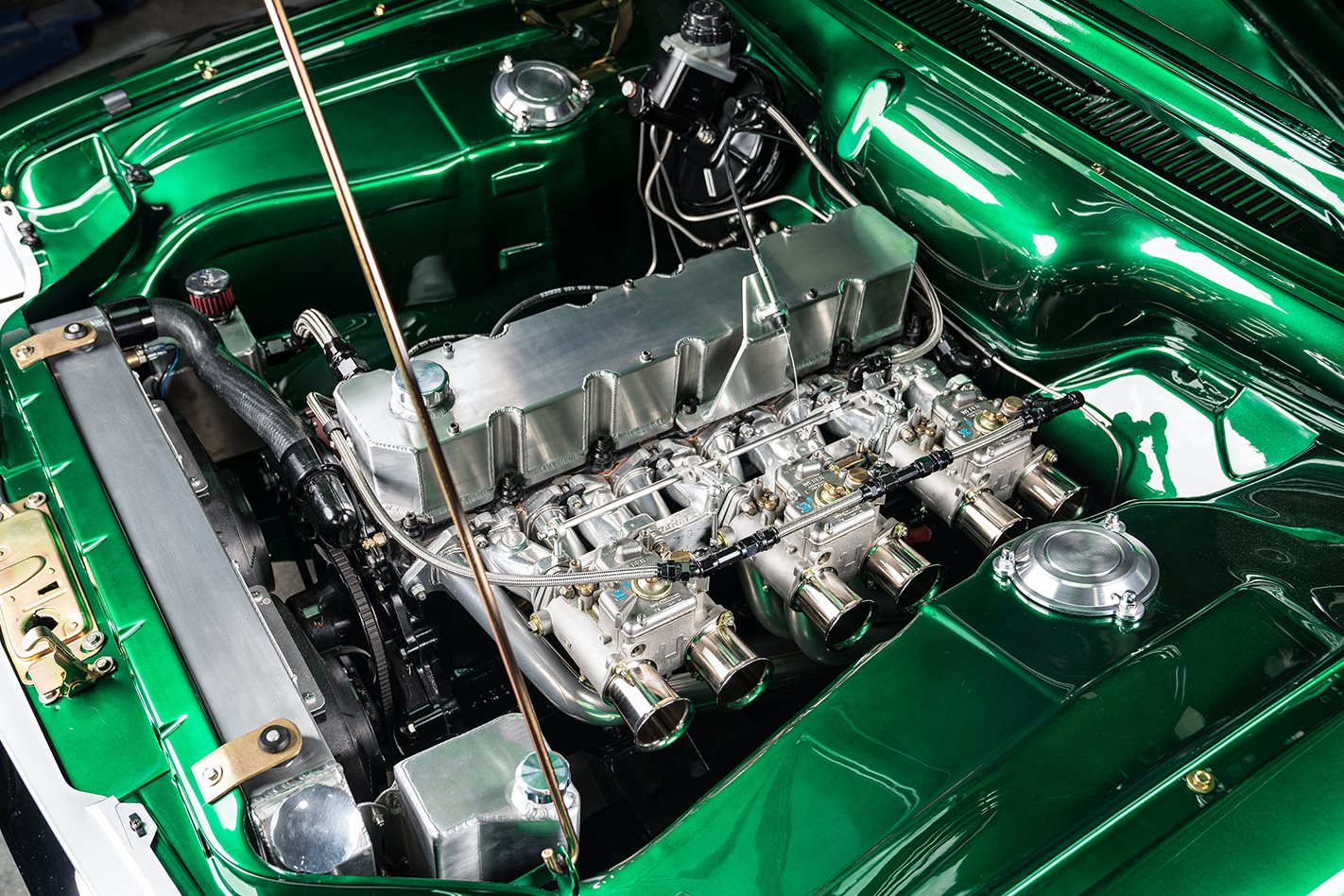 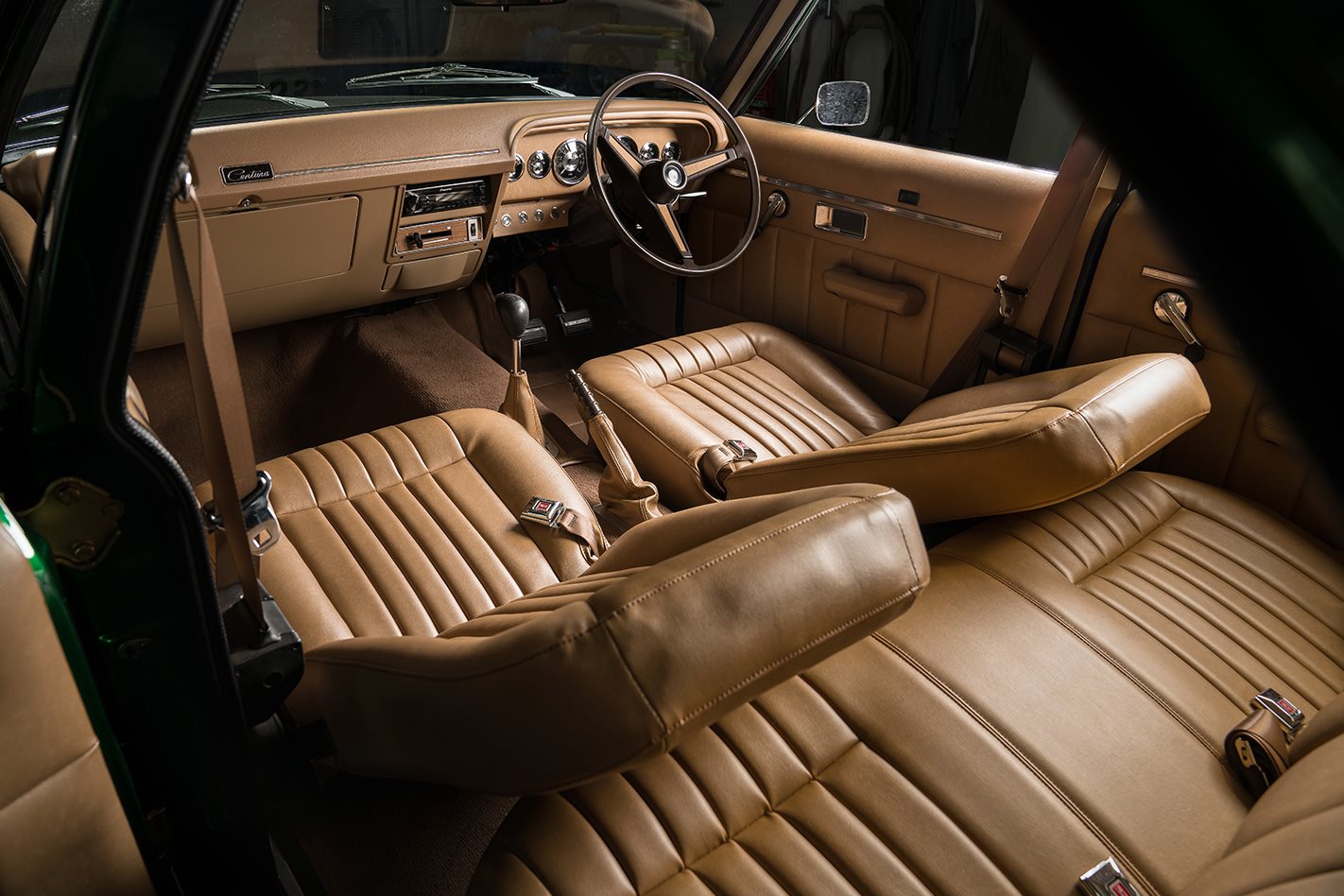 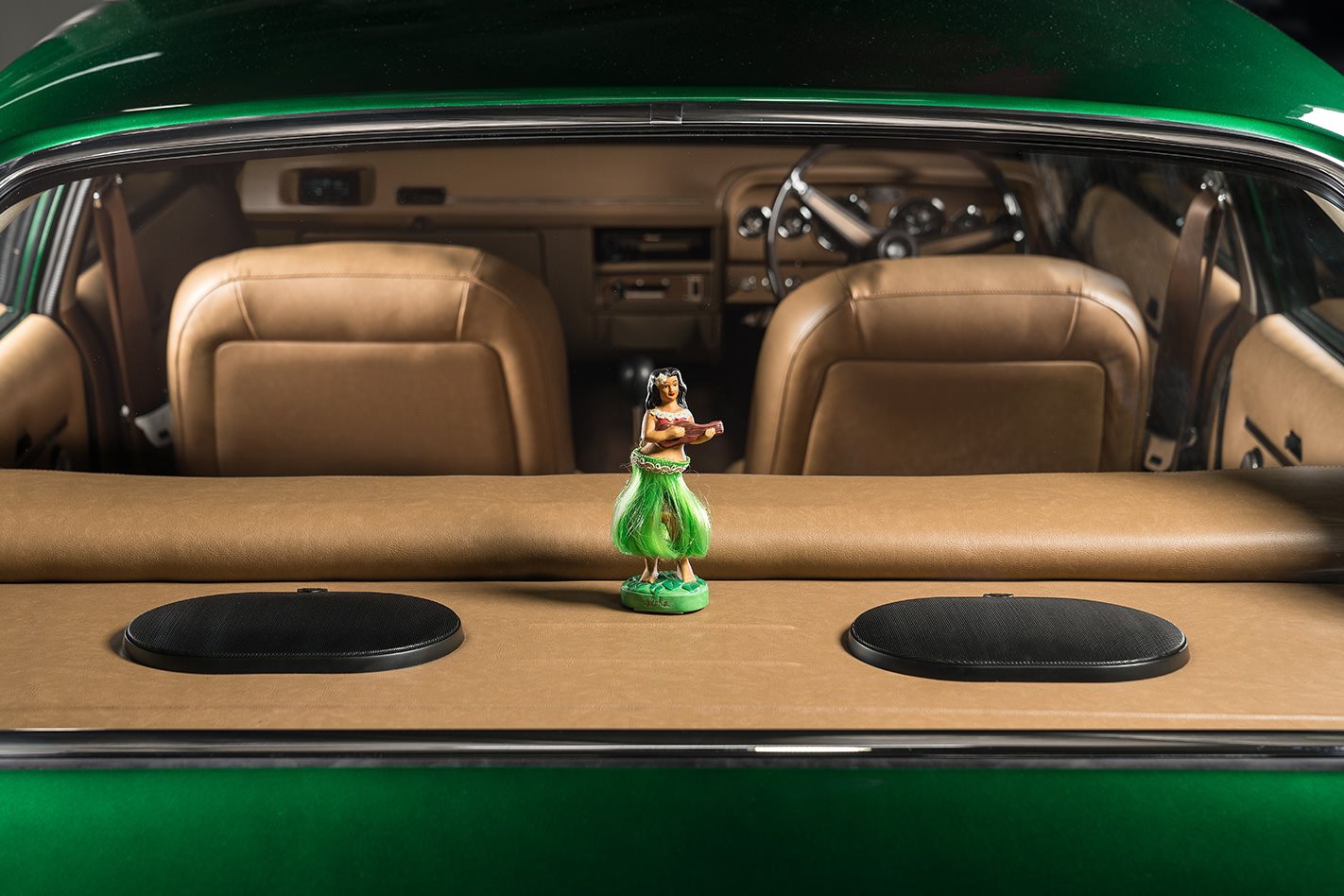 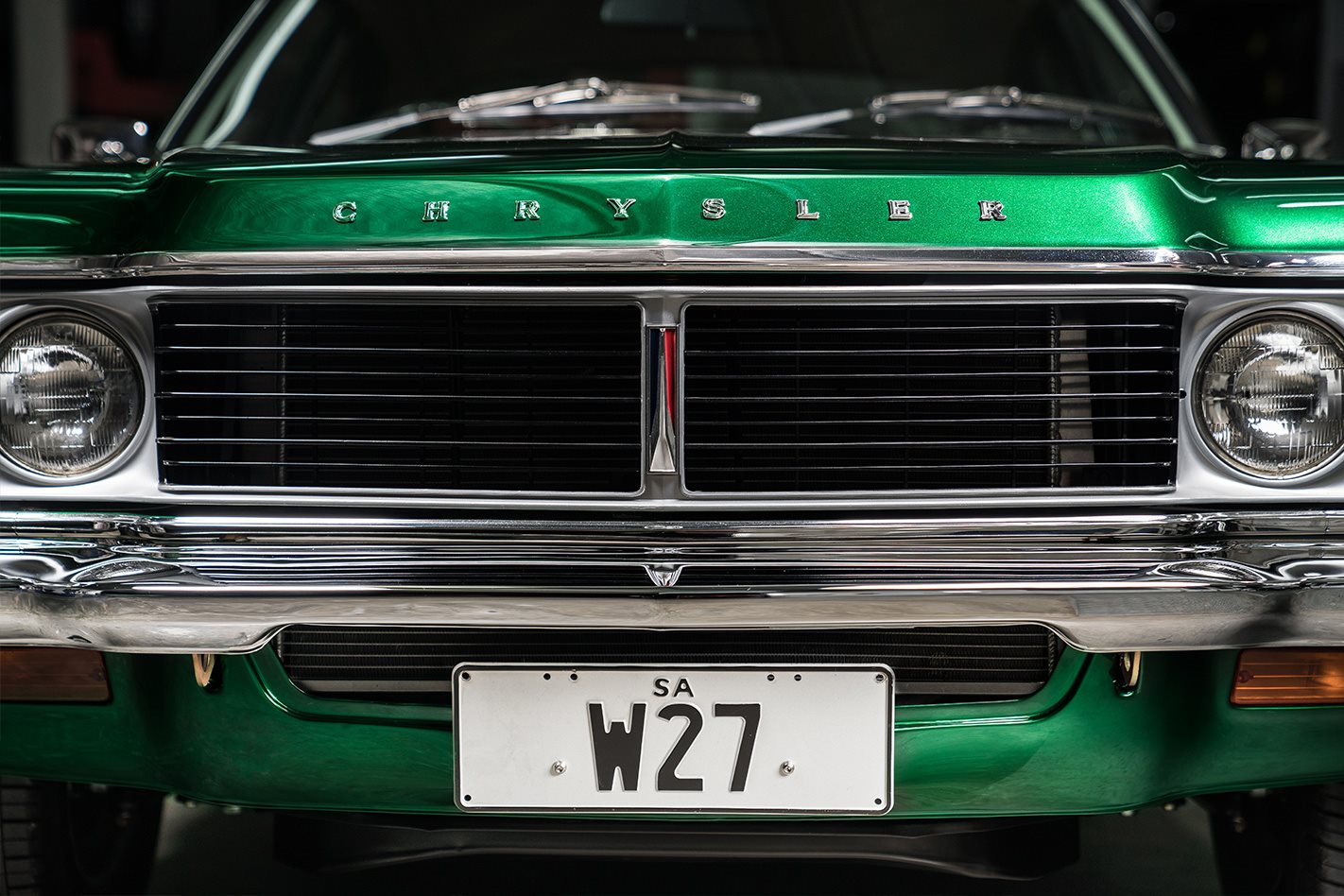