Debuted at Summernats 29, Grant Connor's candy-coloured Bad Apple Ford XR Falcon took home so much tinware, including People's Choice, you could melt it down and build a Kia

Debuted at Summernats 29, Grant Connor's candy-coloured Bad Apple Ford XR Falcon took home so much tinware, including People's Choice, you could melt it down and build a Kia

CONTRARY to popular belief, it wasn’t eating the apple that got Adam and Eve expelled from the Garden of Eden – they were lured out by Bad Apple, Grant Connor’s irresistible candy-coloured XR Falcon. Given the slick sedan was an instant crowd favourite the minute it was unveiled at Summernats 29 (and went on to take out the Meguiar’s People’s Choice award), you could hardly blame the curious couple; they were only human, after all. 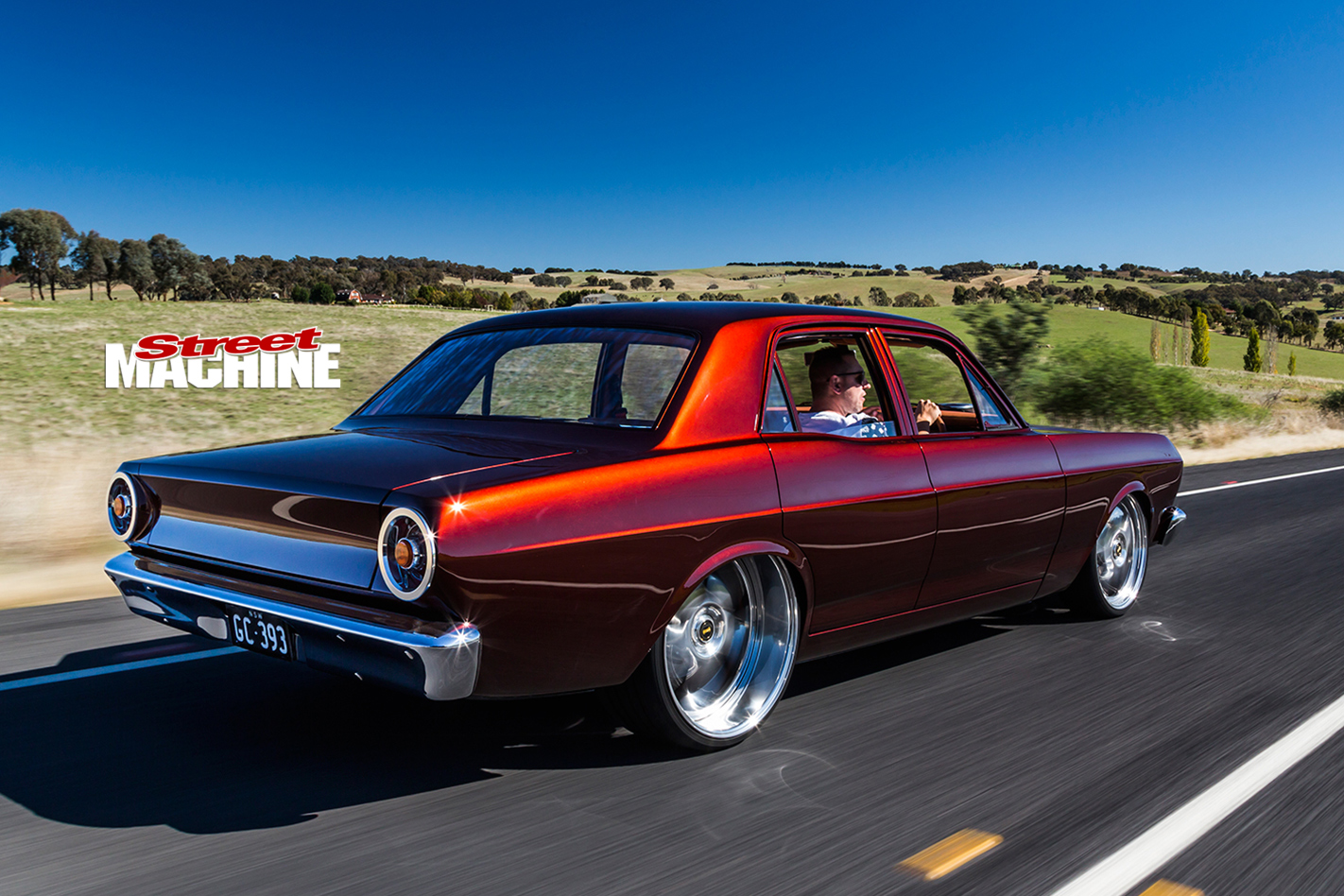 Even before it became Bad Apple, Grant himself couldn’t resist this XR’s corrupting influence. “I originally bought it just to drive around; I never intended to do it up,” he says. “But not being able to leave well enough alone, first I added the tough 393 stroker, followed by a set of 20-inch wheels. These scrubbed badly, so I took it to Dez and the crew at Knight’s Garage to get the guards rolled. Before long, rolled guards turned into tubs, which turned into a full respray, which turned into a re-trim and on and on it went. Two years later it’s turned into this. It’s amazing, I love it!” 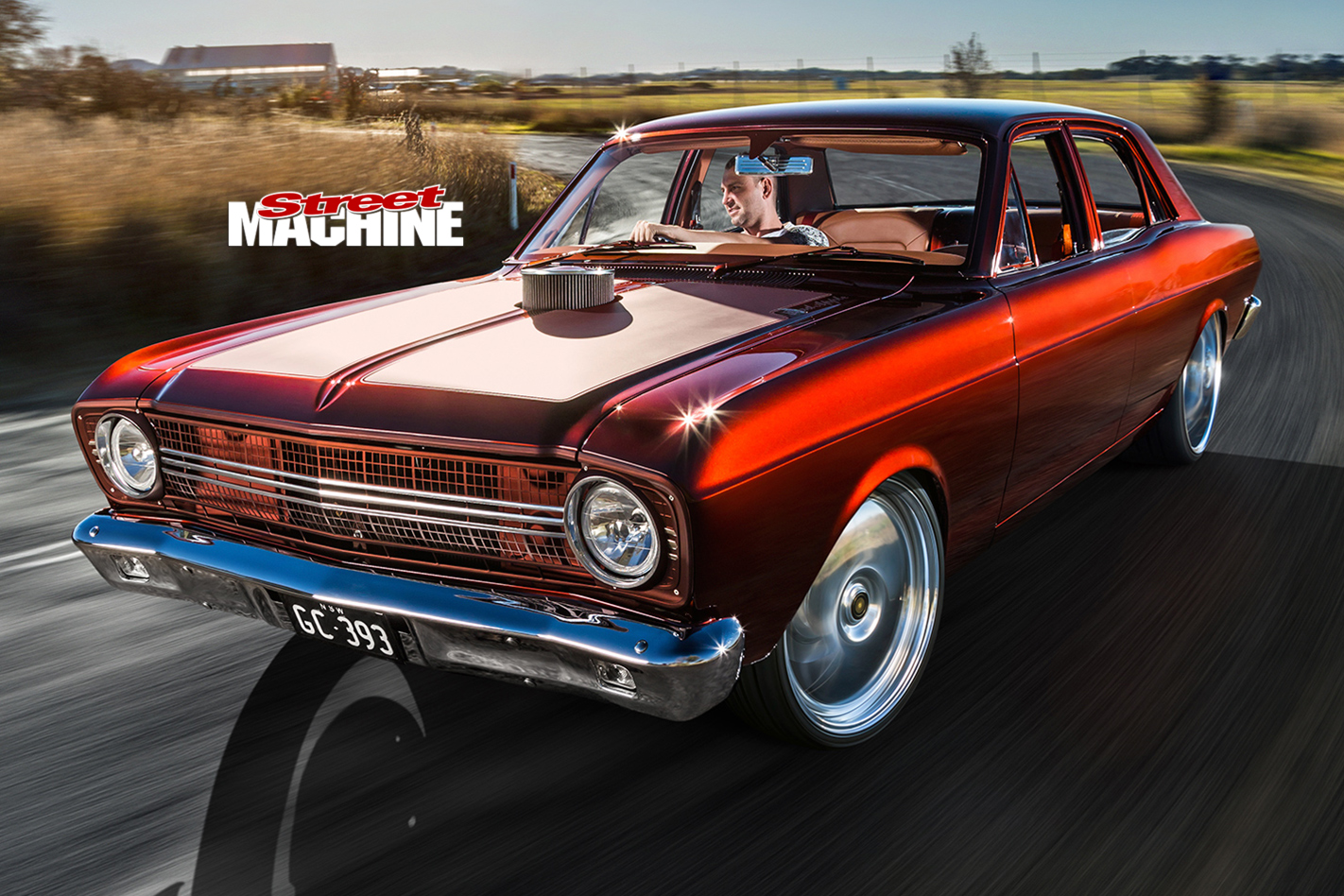 Knight’s Garage owner Dez Knight picks up the story: “Grant’s a local and we’d bumped into each other a few times at shows. He’d done up a few cars and I was confident he wanted to build a car to this level – he was just a bit daunted by the idea. So at first we kept things simple. Before long, Grant started coming in with more and more ideas and the build just went from there.” 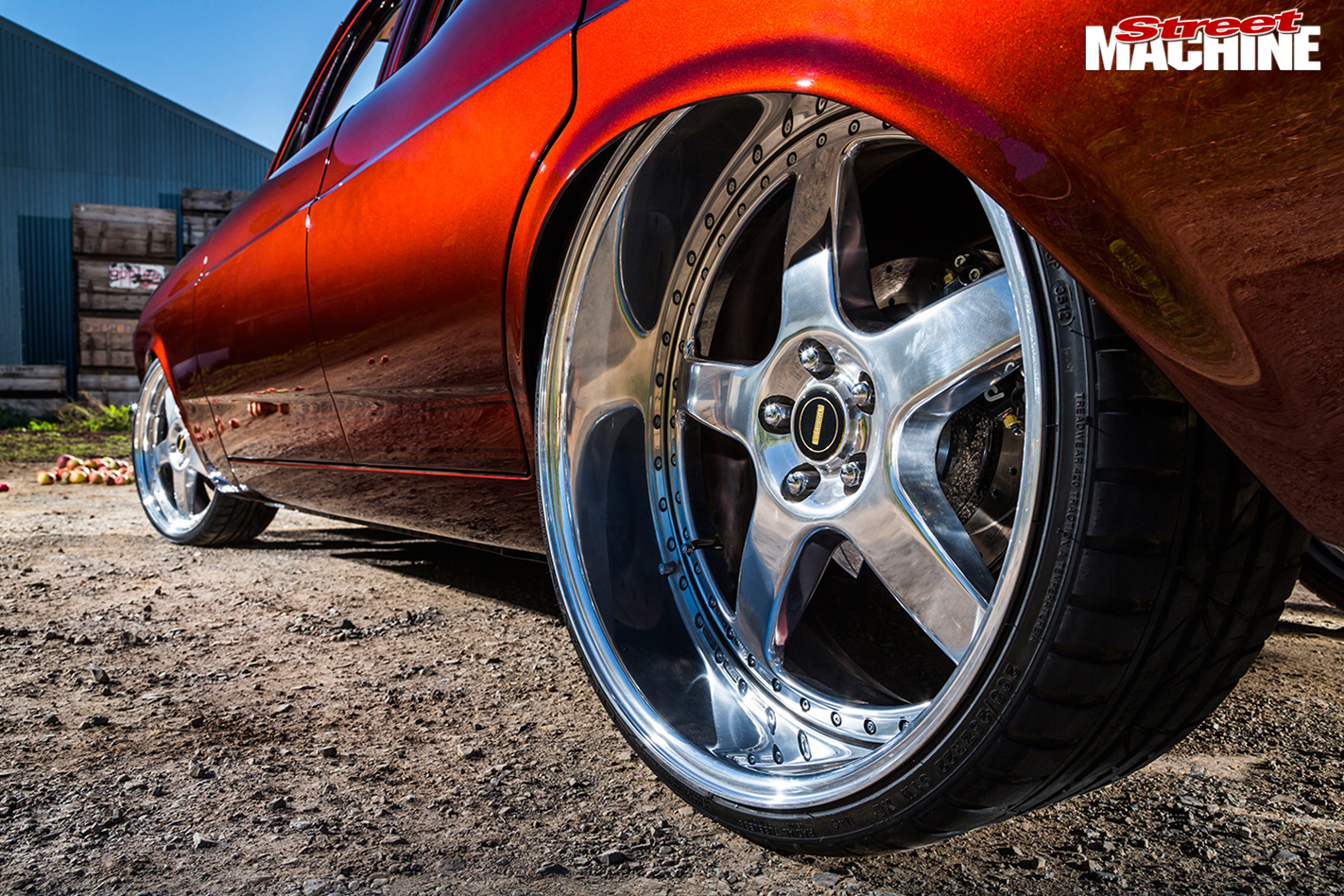 This meant a few things changed along the way, such as the rear quarters. You see, the build started with those guard-rubbing 20s, but what Grant really wanted was 22s. Trading in the barely used 20s on spanking-new 22s was the easy bit; making the taller rolling stock fit was a much tougher task. The tubs, as well as the Geelong Diffs narrowed nine-inch and McDonald Brothers triangulated four-link, were already done – redoing all that would have cost a bomb. Solution? Knock up a shorter set of arms to move the diff forward, then lengthen the front of the wheelarch. The front arches were also re-radiused and trimmed at the front edge, while all the lips were rolled over 3mm wire to give them added strength. 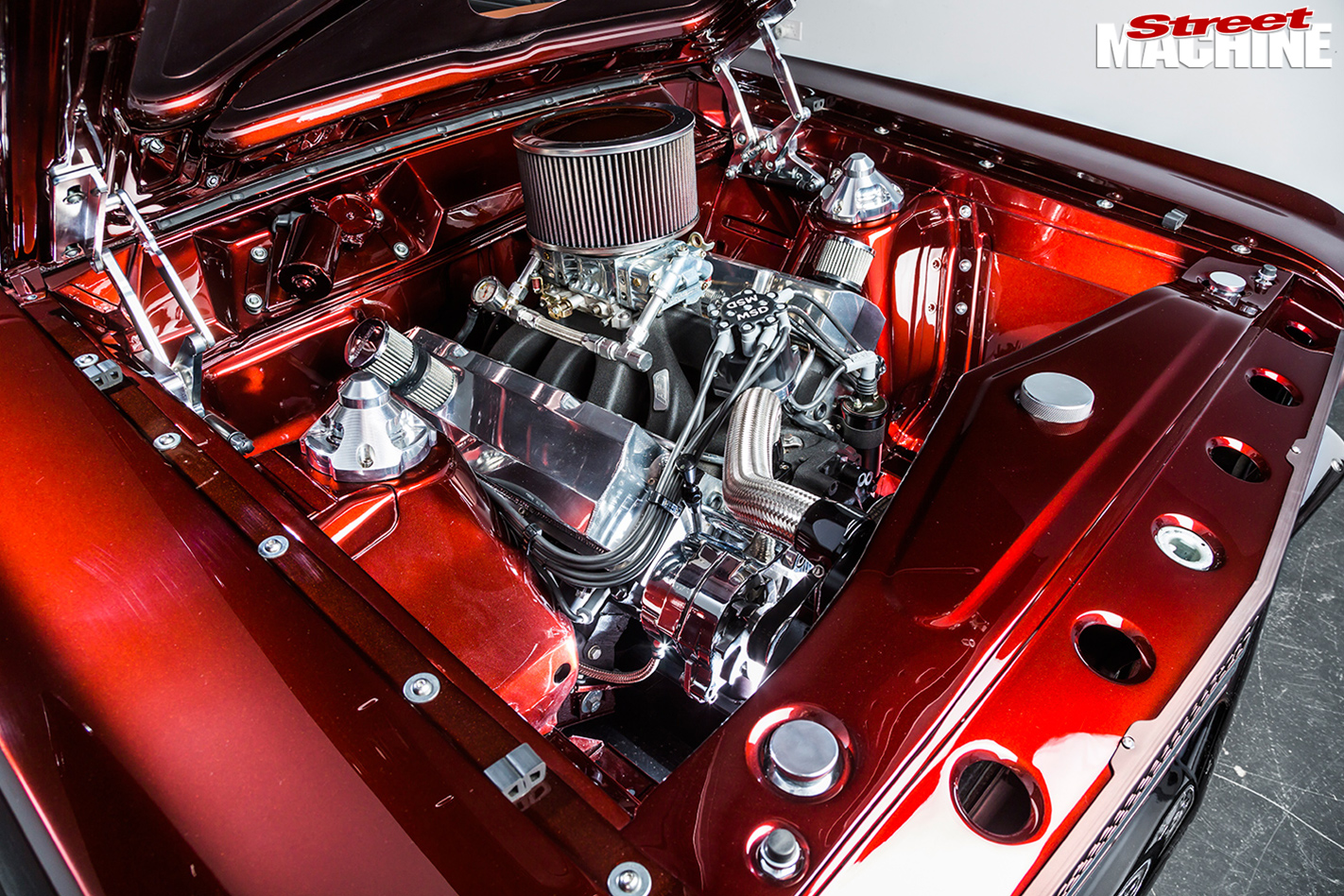 More metal sculpting has taken place under the hood, with a fabricated radiator support panel featuring an overflow cap on one side and washer bottle cap on the other. For better rocker cover clearance, the booster and master cylinder were moved inside using an RRS Stealth SS under-dash set-up. This actuates the Castlemaine Rod Shop Wilwood brake system to give Bad Apple plenty of stopping power. For a touch of refinement, the firewall, battery recess and most of the factory seams all copped the oh-so-smooth treatment. And did you notice the satin finish on the top and underside of the bonnet? The same treatment was also employed on the grille and the underside of the boot floor as well. 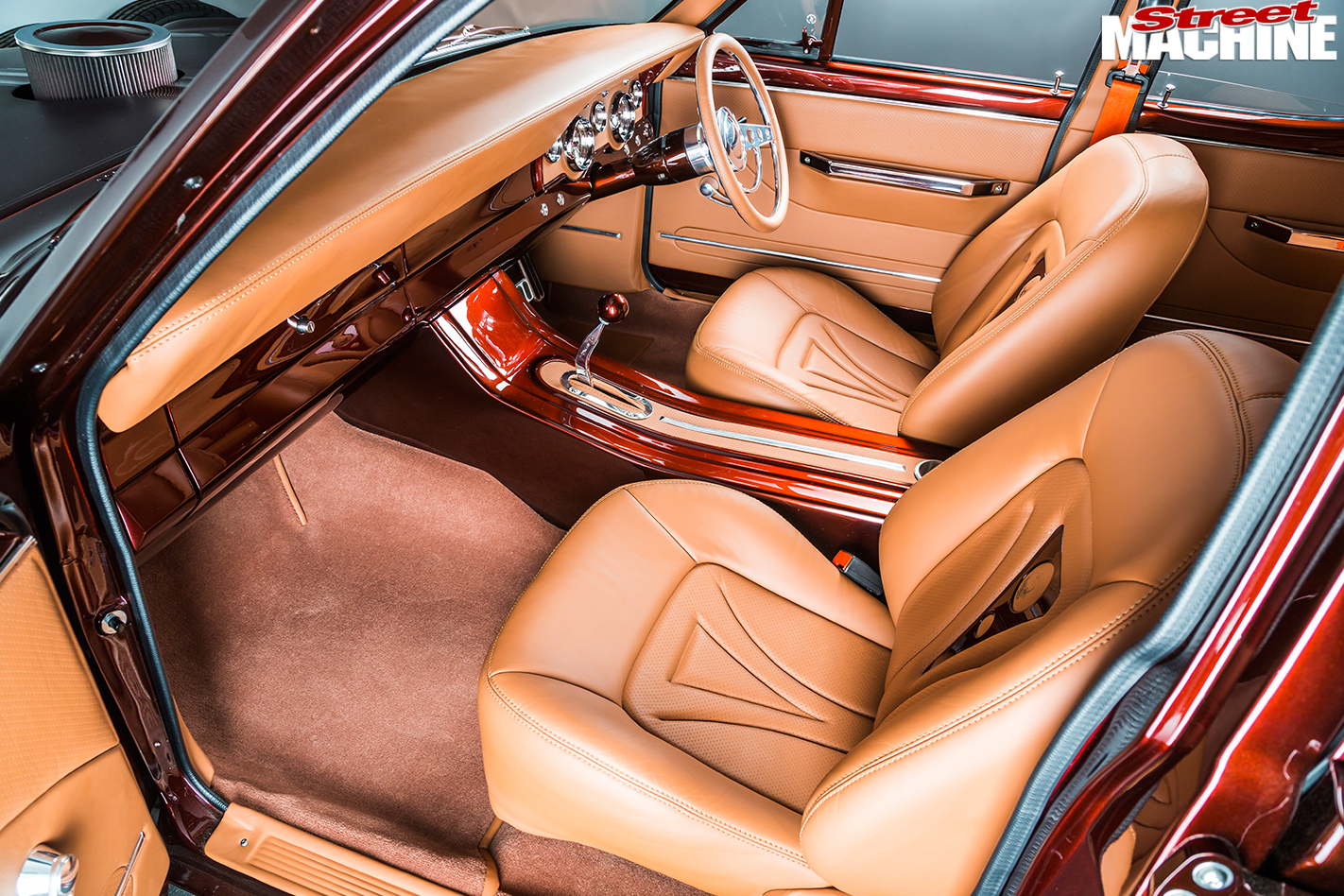 Stepping inside is like stepping into another dimension. The dash structure has been welded up and smoothed off – even the glovebox lid was smoothed and meticulously gapped to the same level of perfection as the exterior panels. The original switchgear has been replaced with electronic push buttons – including one labelled ‘Engine Start’. Look under the dash and you’ll find smooth, flush-fitting panels. Knight’s Garage also fashioned the full-length metal console and rear parcel tray. The inserts in the console, seats and boot lid, as well as the dash fascia, are all hewn from aircraft aluminium. 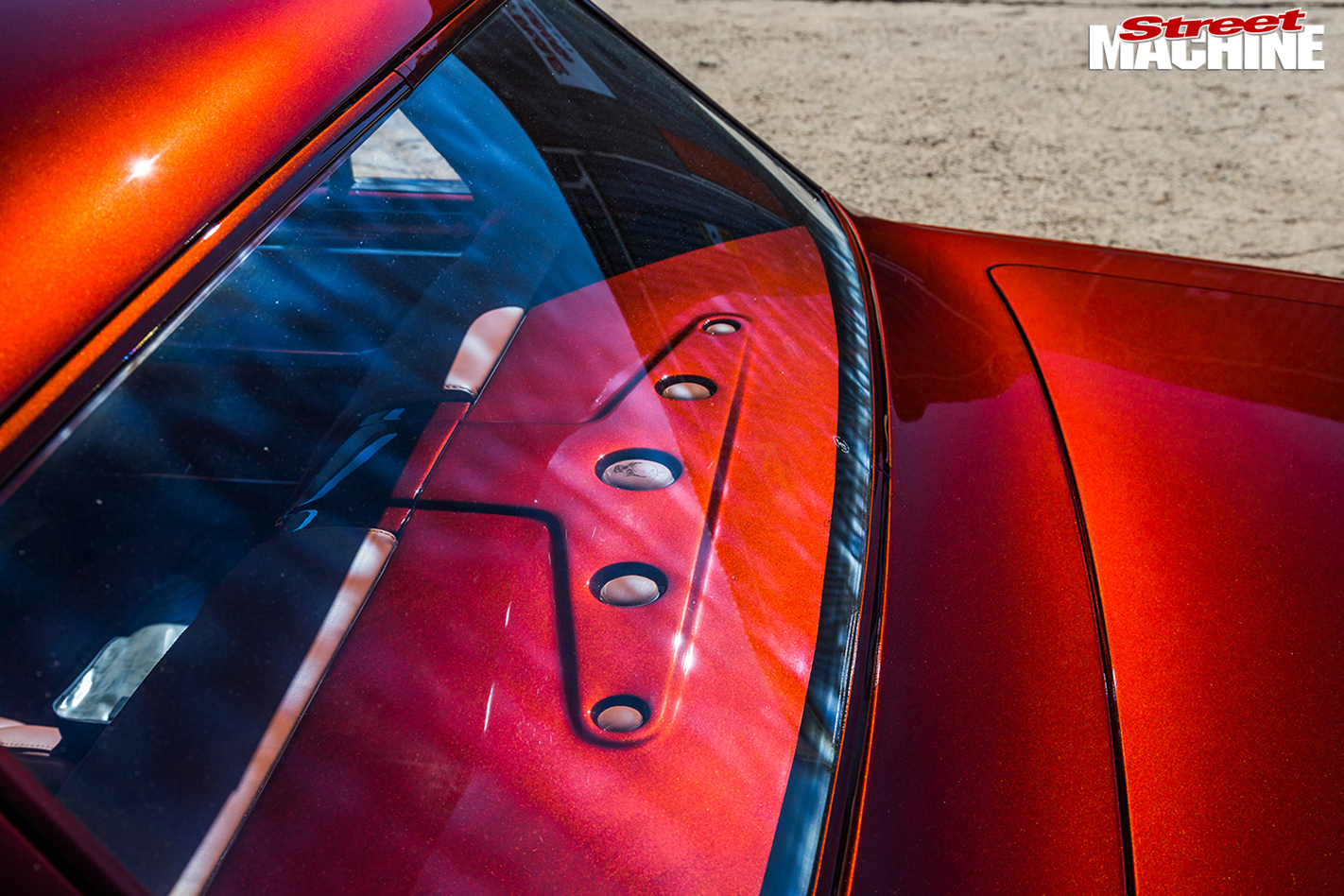 Matt Gilkes from Inside Rides not only took care of sewing duties, he’s also responsible for the fibreglass door trims, kick panels, boot panelling and one-piece hoodlining. With Grant measuring up at six-foot-five, Matt shortened the overall height of the BA Falcon buckets and also modified the seat bases and original XR runners to lower the whole seat and provide Grant sufficient headroom. By contrast, the rear pews (which Inside Rides made from scratch) were far more straightforward. Matt says there’s virtually no ’67 FoMoCo left inside Bad Apple; the crash pad is about the only stock piece – and even that’s been trimmed in leather! 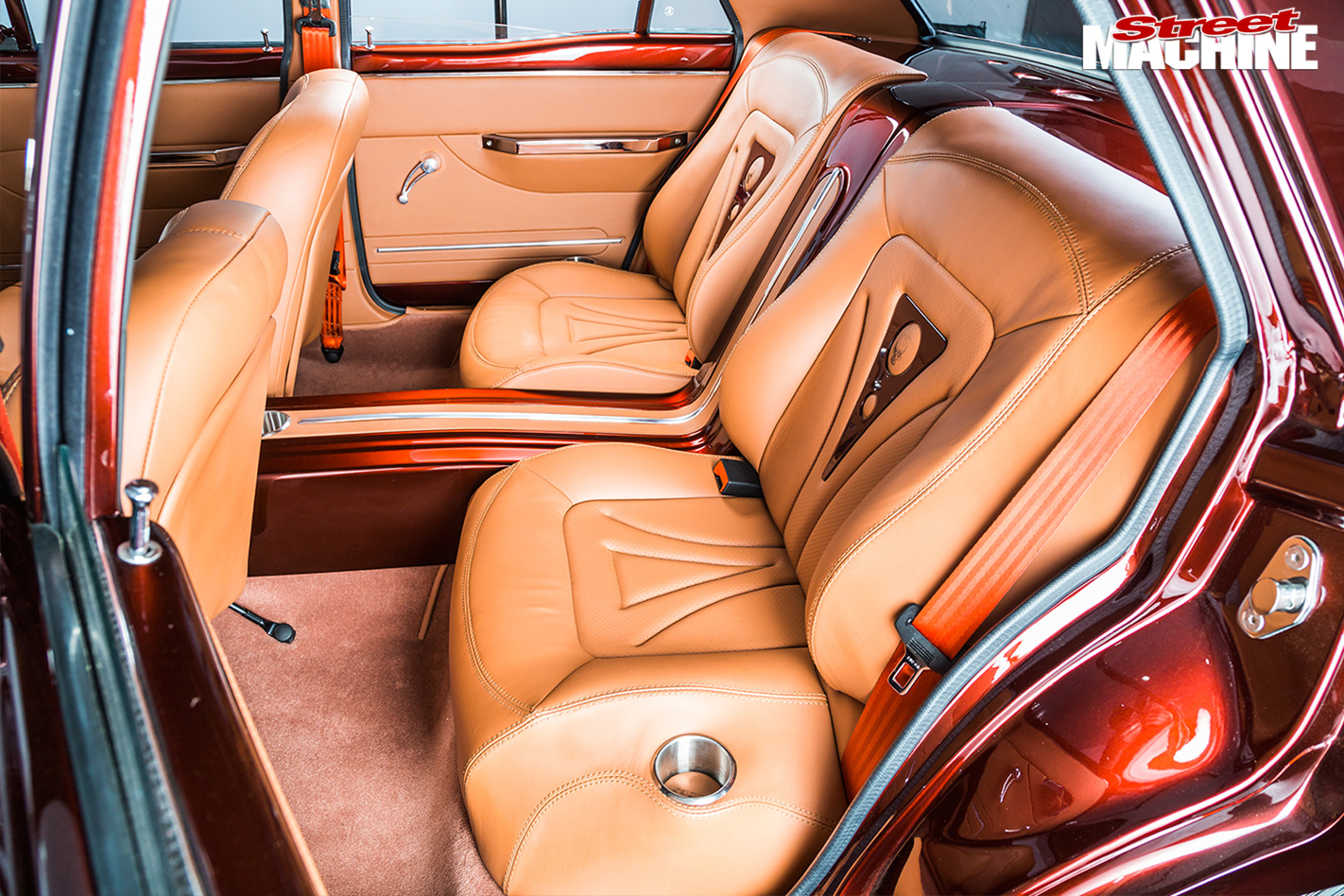 Grant is planning to drive the shit out of this car – that’s why it’s got four cup-holders – so that meant its ergonomics had to be spot-on; the steering column had to be in the right position, none of the gauges could be obscured and the shifter had to be at a comfortable arm’s reach. All the details have been very well thought out. 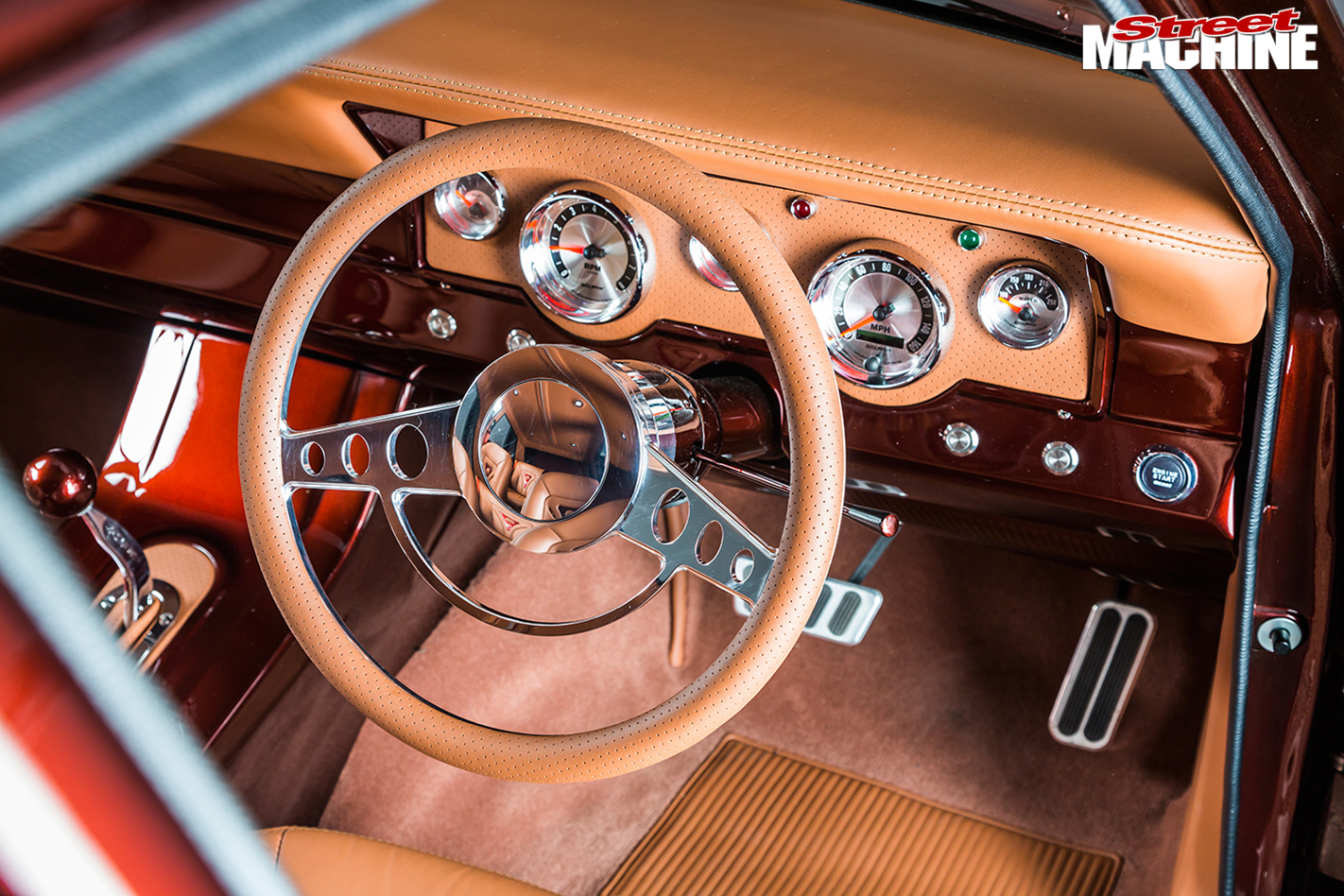 Looking at the bodywork, it’s more what you don’t see that makes Bad Apple so mesmerising. The door handles, door locks and fuel filler have been shaved and there’s not a ripple or awkward contour in sight. Every panel is glass-like thanks to the Knight’s team’s body prep skills, combined with Andrew Ash’s (AA Panel Craft) prowess with the spray gun – plenty of hours of rubbing, sanding and buffing also had a lot to do with it. 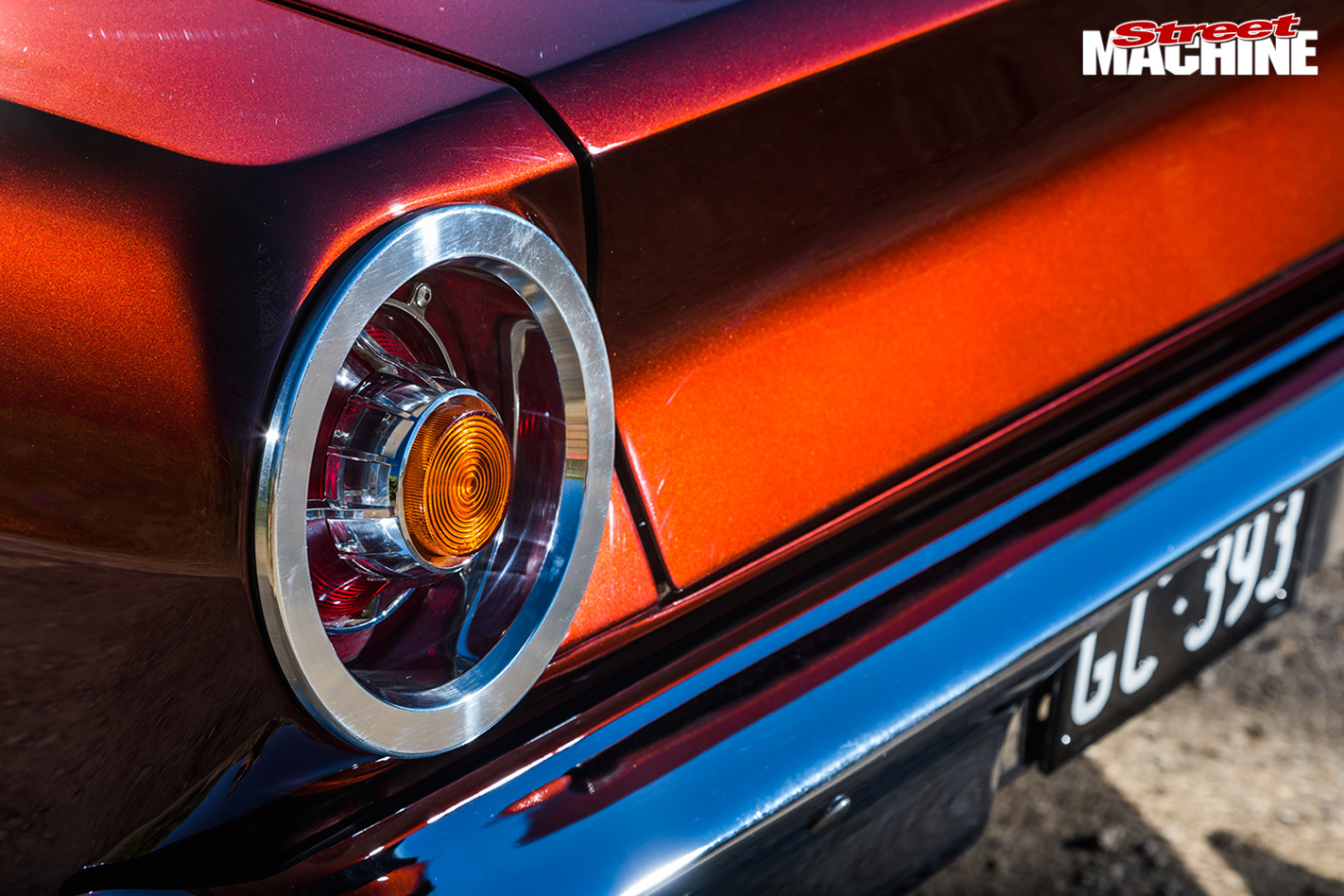 “I love this shape,” Dez says, “especially after doing Mick Fabar’s XR, ZERO’D (2013 SMOTY winner!) and now Bad Apple. My favourite bit is from the back of the rear doors through to the tail-lights. I love how the hip-line bumps up and the car gets a bit wider as it flows into the quarters.” 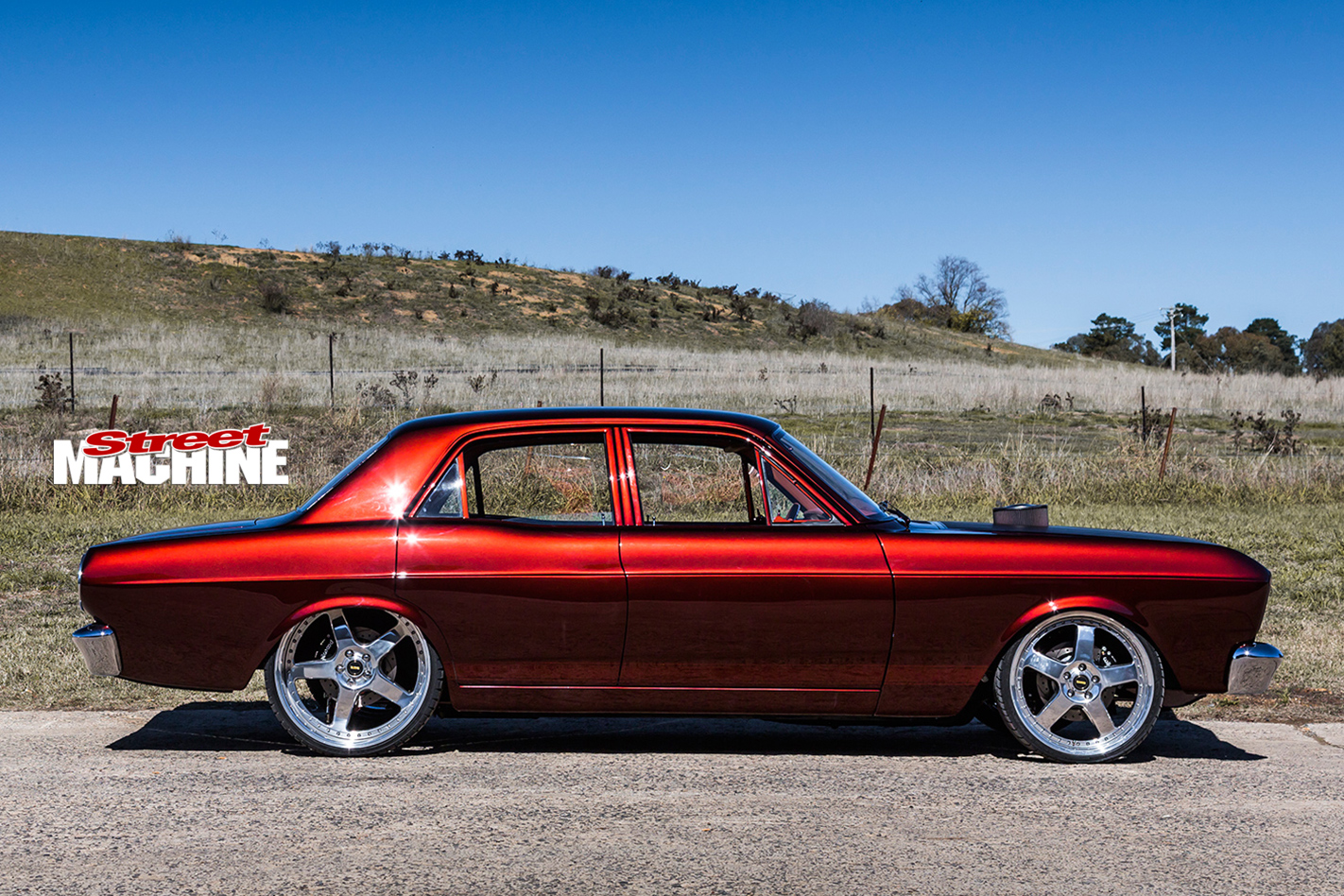 As for that drop-dead gorgeous colour, a custom HOK Apple Red/Pagan Gold/Root Beer mix, it took Grant almost two years to settle upon it. For a long time he had his heart set on Brandywine, but after seeing a host of other cars in the same colour at MotorEx, he decided to opt for something outside the box. “In my head I knew what I wanted,” he says. “I set aside a full day with Andrew to come up with the right colour. He nailed it on the second spray out; the guy’s brilliant!” 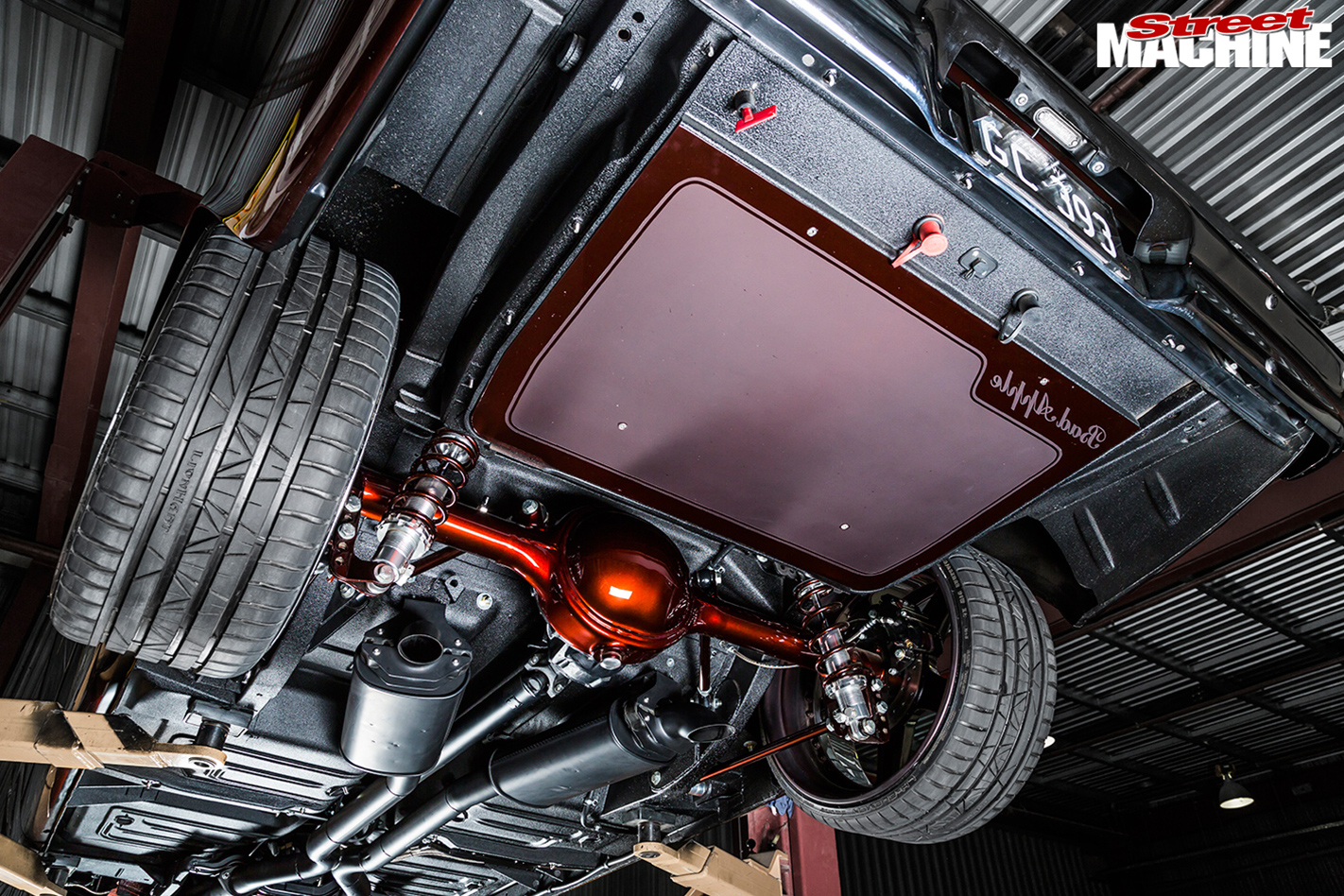 Bad Apple is much more than just supermodel good looks though; it’s also got balls! The stroked 393 Clevo was already plenty tough, and has been filled with a host of go-fast goodies. Not one to let a chance go by, ACM Engines & Dyno upped the ante by bolting on a set of high-flowing AFD alloy heads and matching inlet manifold while the mill was out getting detailed. Rounding out the driveline is a manualised C4 and obligatory nine-inch. 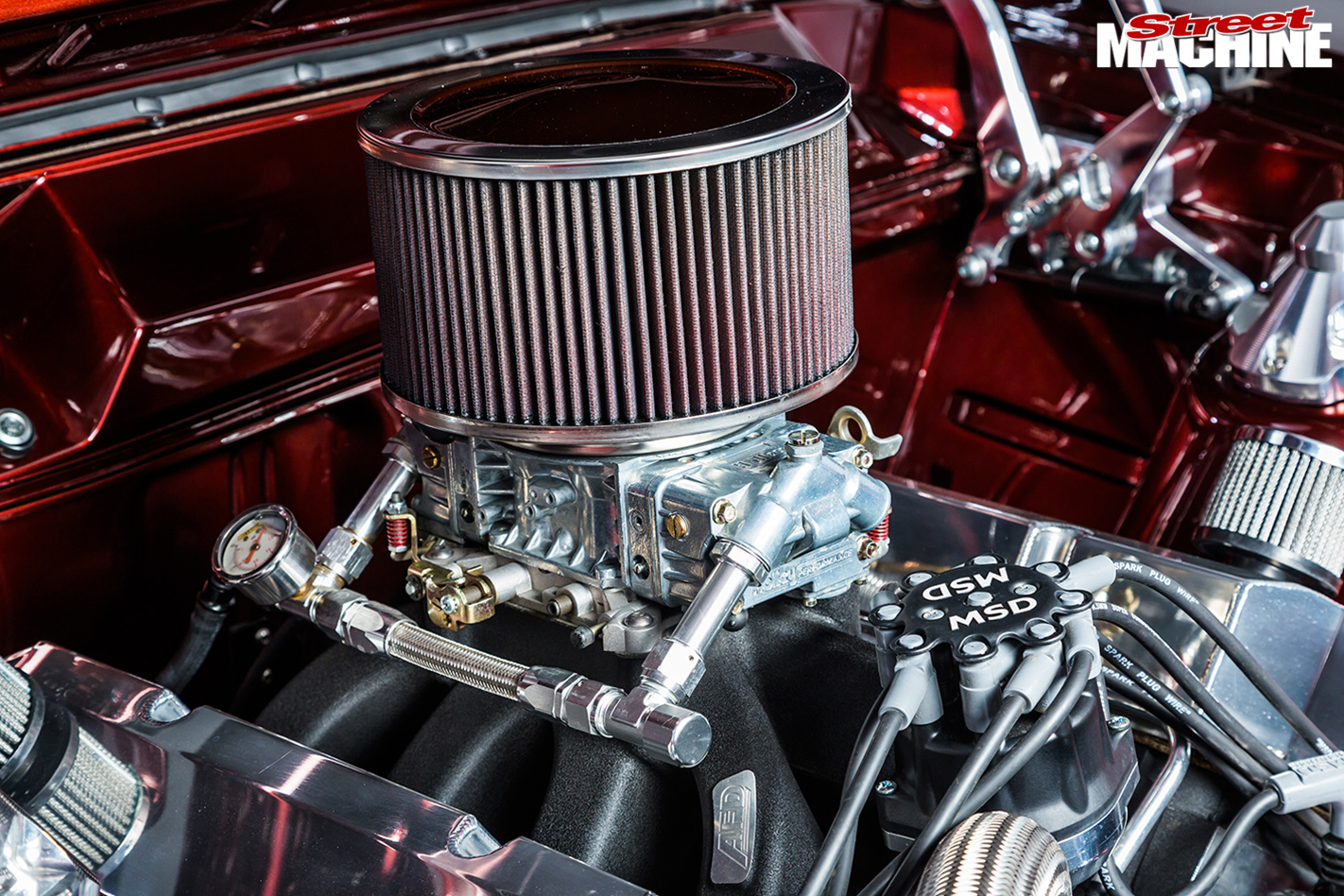 In the six months leading up to Summernats, it was a big push to get the car ready, but the Knight’s crew finished in plenty of time. “We had a whole day up our sleeves!” Grant says. “After accumulating a few points from winning People’s Choice, we decided to go for Grand Champ. The driving events were the Falcon’s first drive. Considering I didn’t know what the engine or brakes would do, I thought it was pretty cool we came second in the Go-to-Whoa.”

Having also bagged Top Super Street and 3rd Top Interior at ’Nats 29, in addition to People’s Choice, it’s fair to say Grant was pretty happy with the XR’s debut. 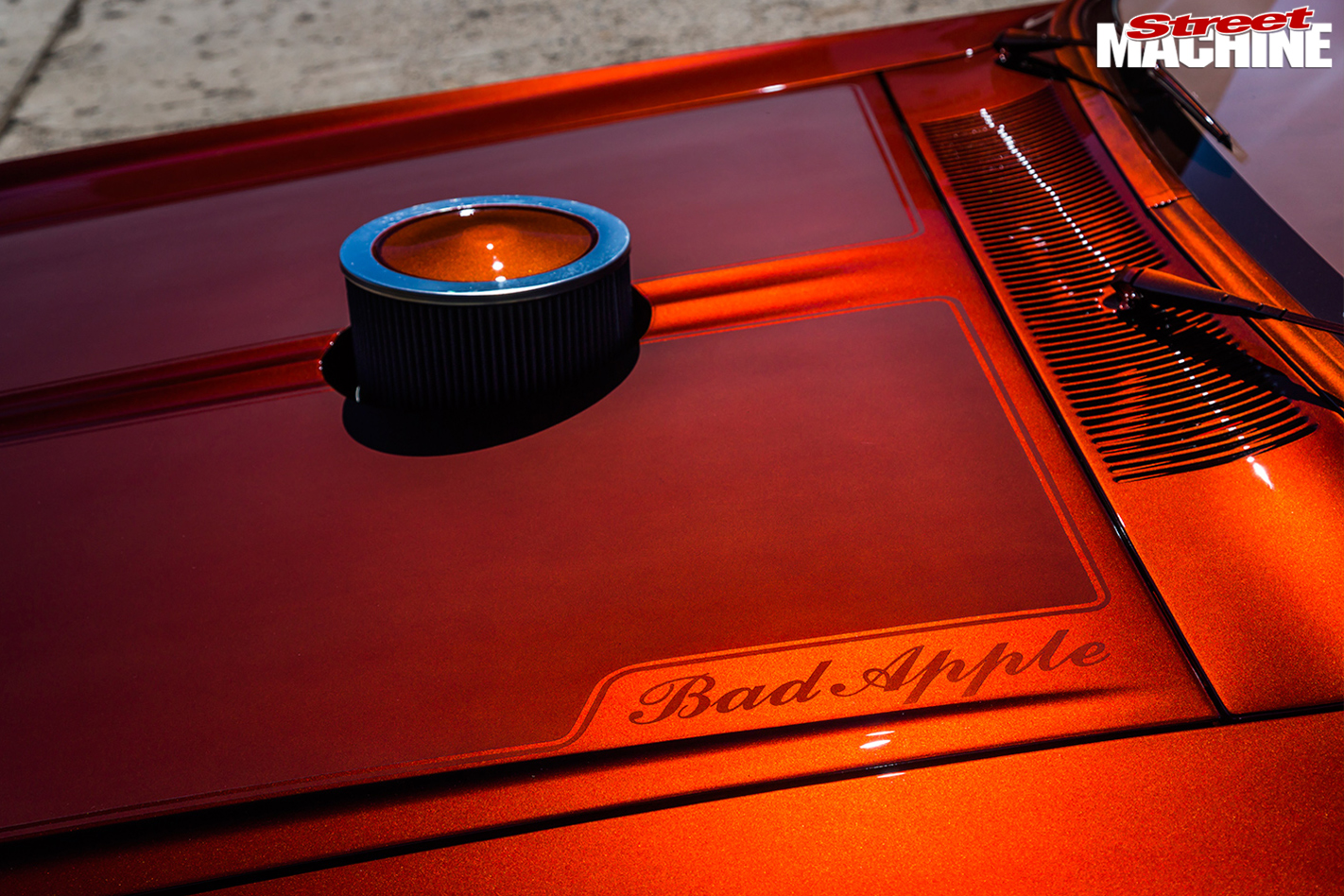 “The car exceeds my every expectation,” he enthuses. “When the covers came offat Summernats, we were pretty happy it held its own against the cars around it. I love the stance, the paint, the way the tyres tuck. 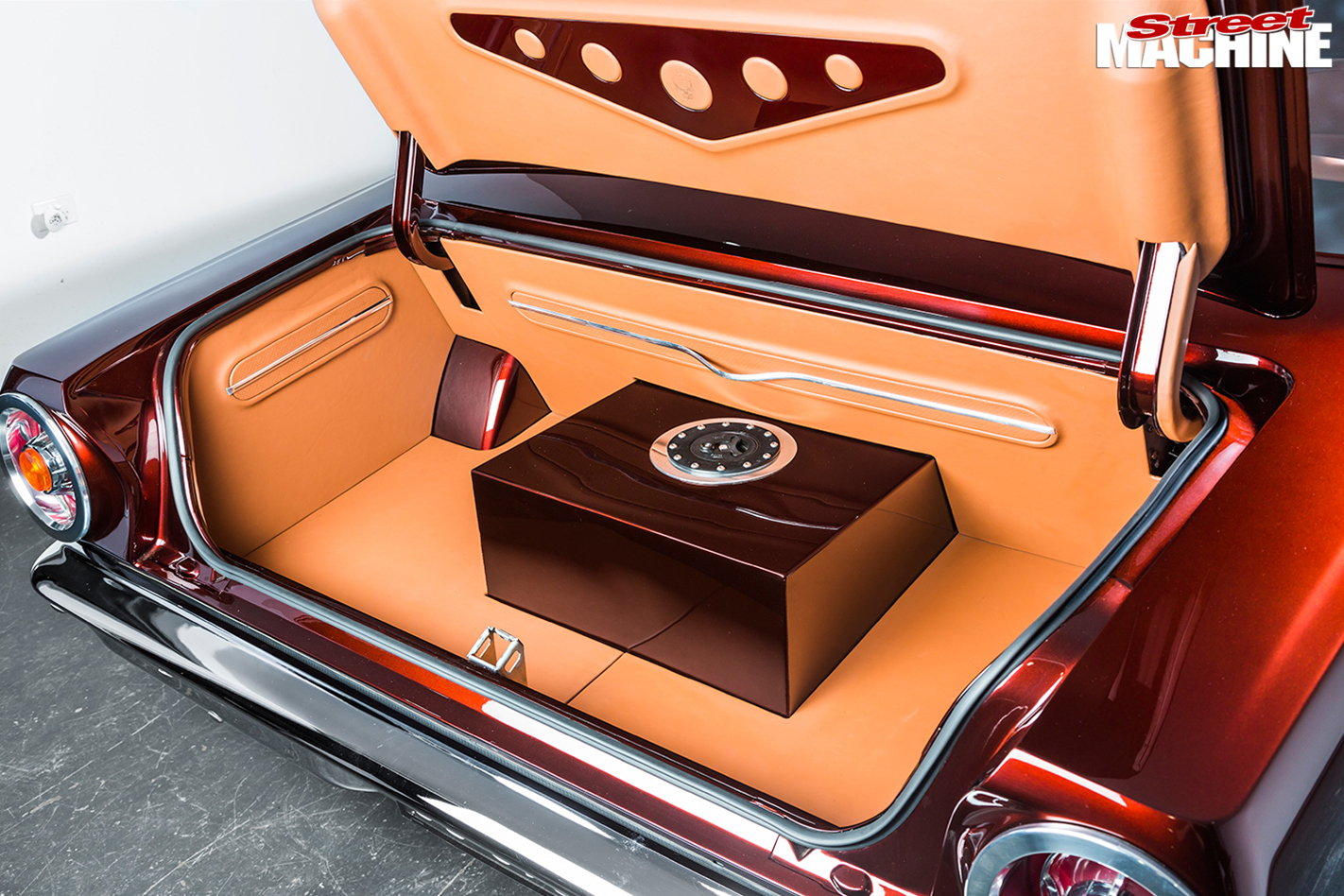 “You hear so many horror stories of people getting ripped off, dodgy work, court cases and whatnot. I was so happy with Knight’s Garage, I can’t recommend them enough.” 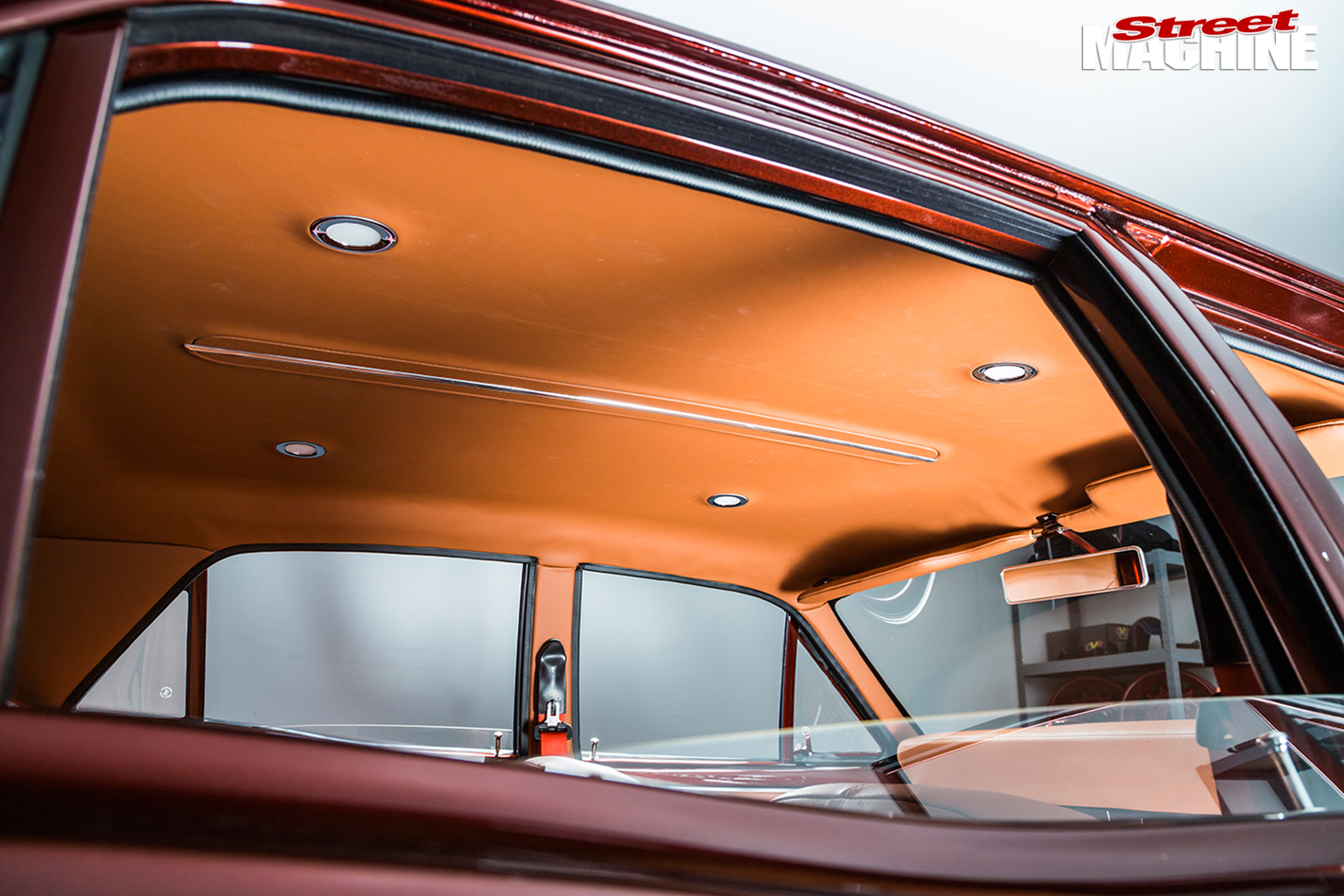 Grant’s already talking about adding a 6/71 huffer before the next Summernats, as well as building a couple more cars – namely a ’57 Buick and maybe a ’32 rat rod. Clearly, the irresistible allure of Bad Apple has corrupted him beyond redemption – welcome to the club, mate! 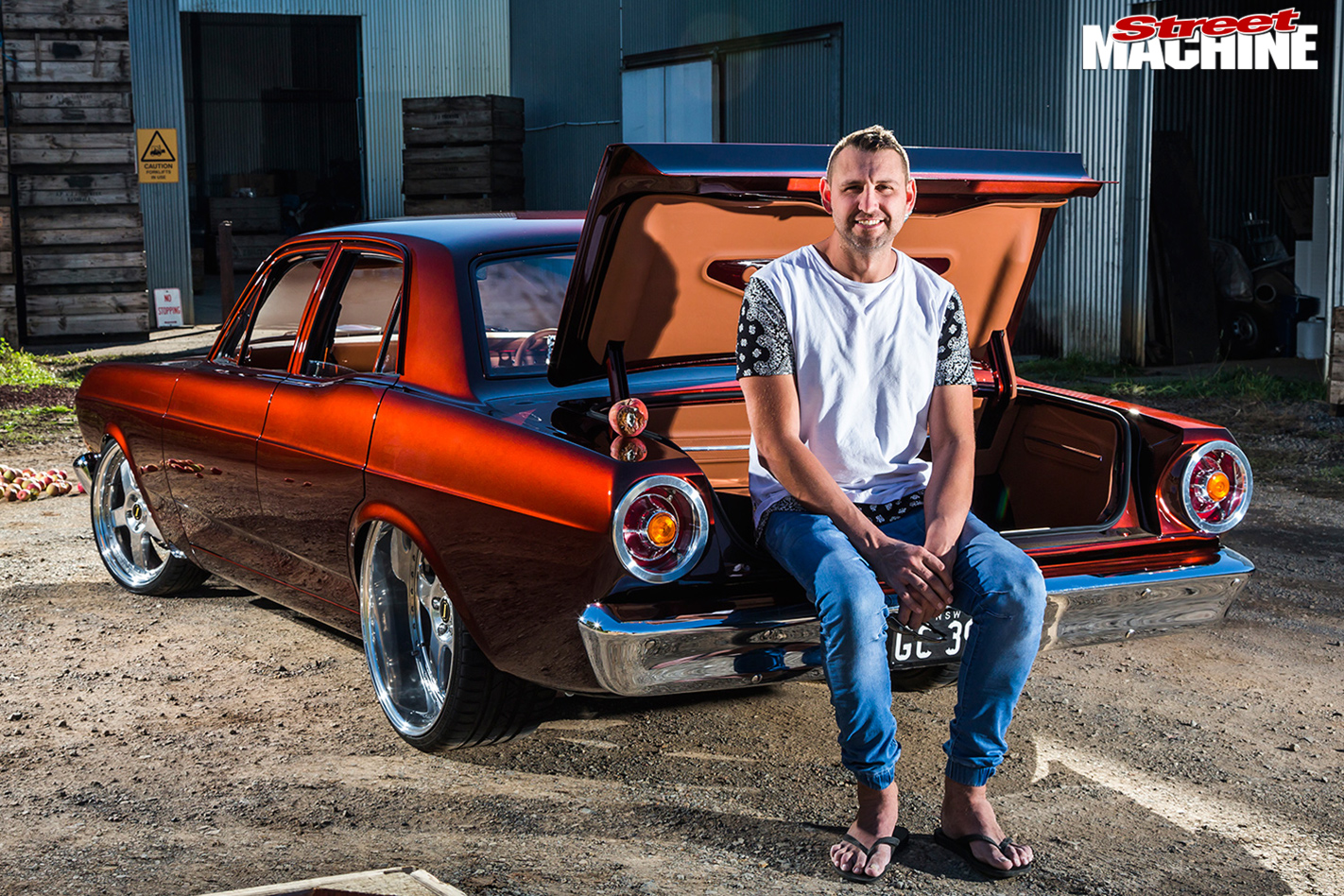