THE diehard Holden fans are going to hate it, but Al McClure is too busy running eights in his stunning Barra-powered LC Torana to care. Built entirely in a back shed in Serpentine, Western Australia by Al and his two sons, Connor and Bailey, this Ford-powered lion has clear potential to end up in the mid-sevens.

The McClures are a drag racing family, with Al having clocked up almost 30 years involved in a variety of rides from streeters to Funny Cars. His first car was a Barbados Green Torana with a 179ci six-banger and triple SU carbs, and three decades on, he and his boys have built this LC as beautiful tribute to his first racer. 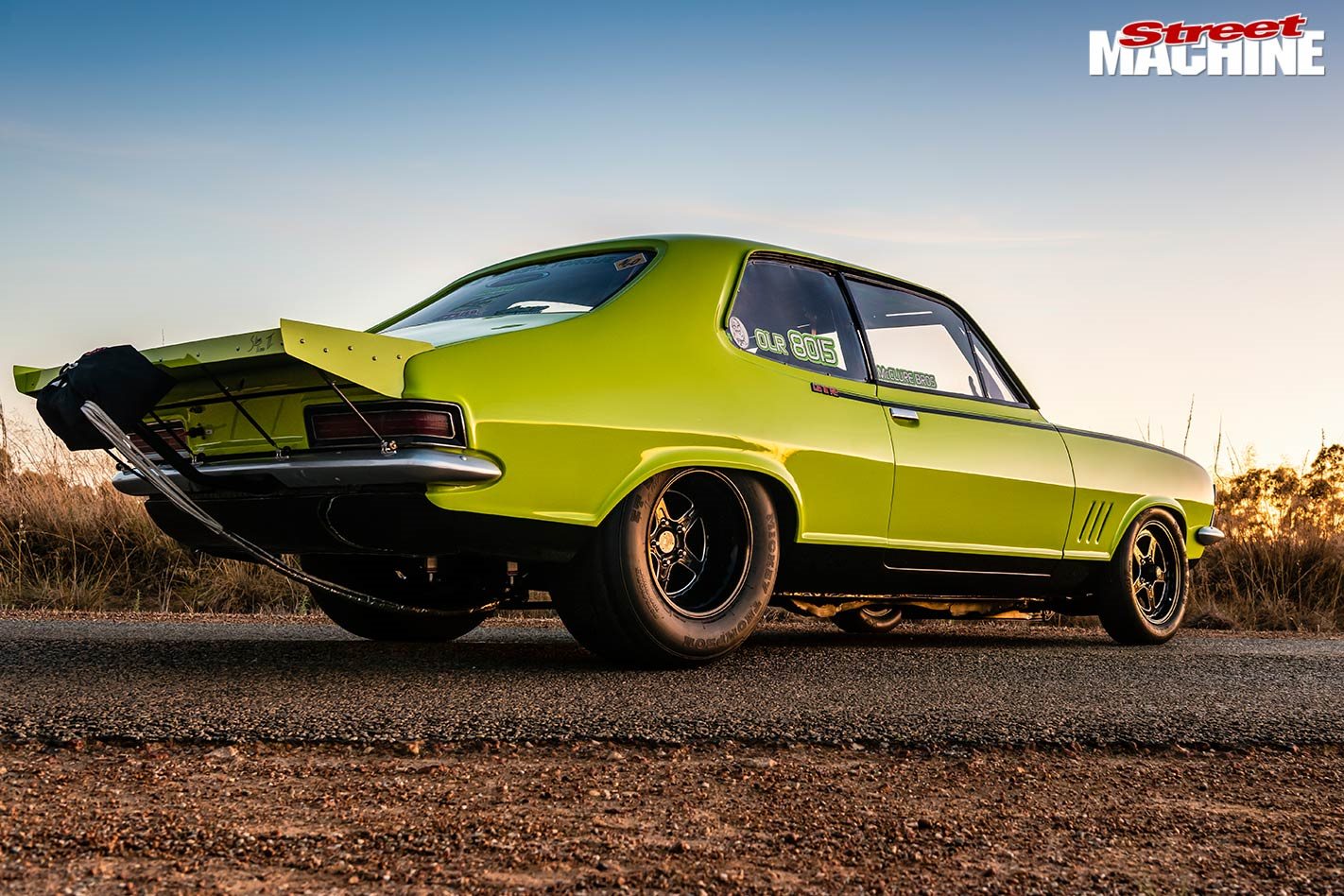 “The kids did Junior Dragsters, and about 10 years ago I was looking for a Torana shell to put aside for us to build together one day when we all had the time,” Al explains. “I found this busted-arse shell that was good enough for a drag car, and stuck it up the back of the shed.”

Eight years later, Al and the boys decided it was time to get cracking on it. “It was good for them,” Al says. “They got to learn how to build a four-link, fit tubs, do body and metalwork, build a rollcage – all the tricks of the trade of building a car from scratch. 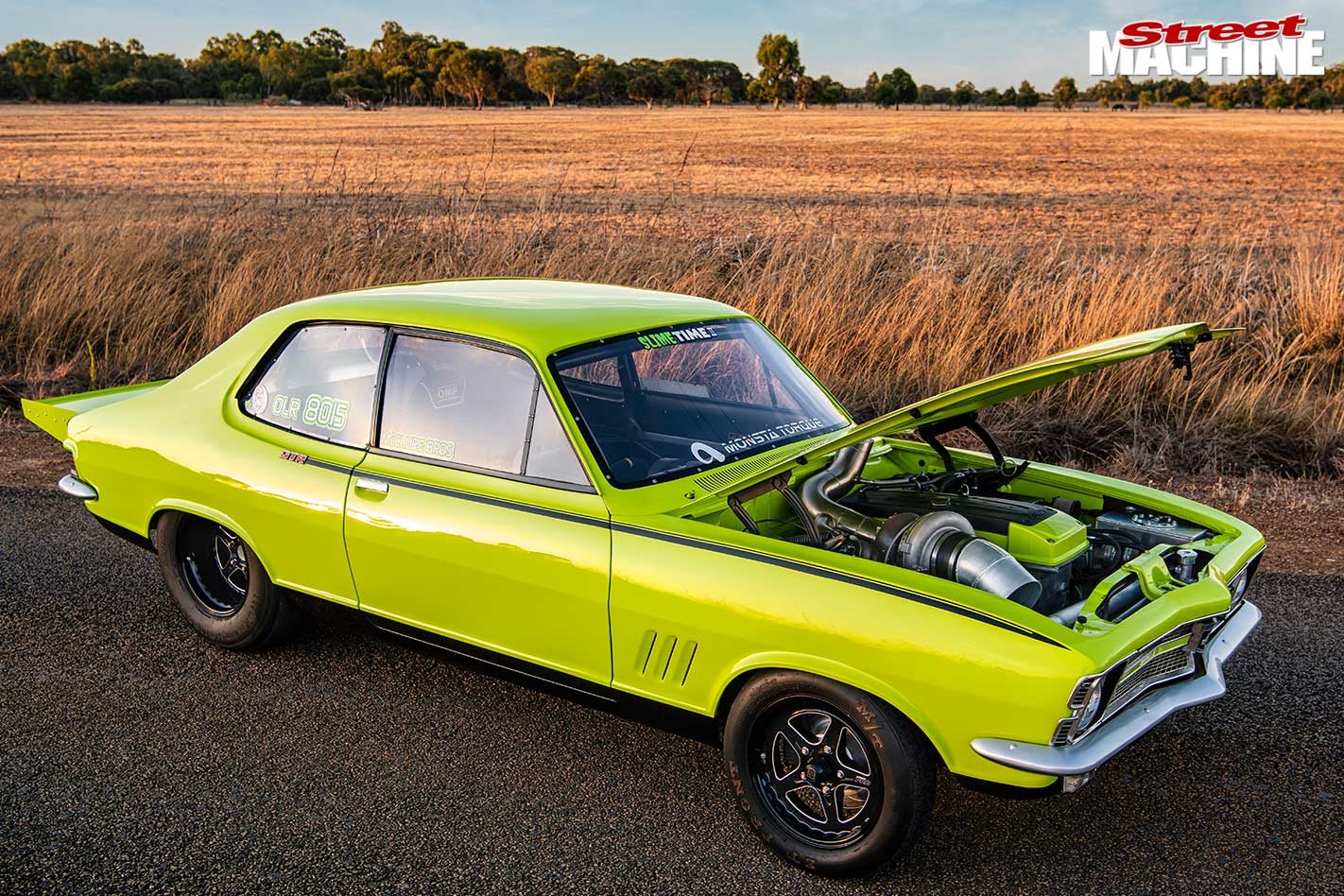 “Because the kids today are into EFI, turbos and radial racing, we decided to go that way; it’s not the direction I otherwise would have gone in. We wanted a six-cylinder, as these cars came with a six-pot, but the Toyota 2JZs are too expensive and the Nissan RBs are getting rare. We also wanted cubes, and that was something the taxi motors had. And these Barra motors were just so cheap! We bought three of them for $400 just to have spare parts, but the plan has always been to build a motor that would make big power.”

To help with that, the boys approached Rob from Monsta Torque, who provided every part of the combination, as well as faultless advice on how to set up the car. “Every part of the build has been done in our shed, and Rob’s advice has been killer from day one,” says Al. 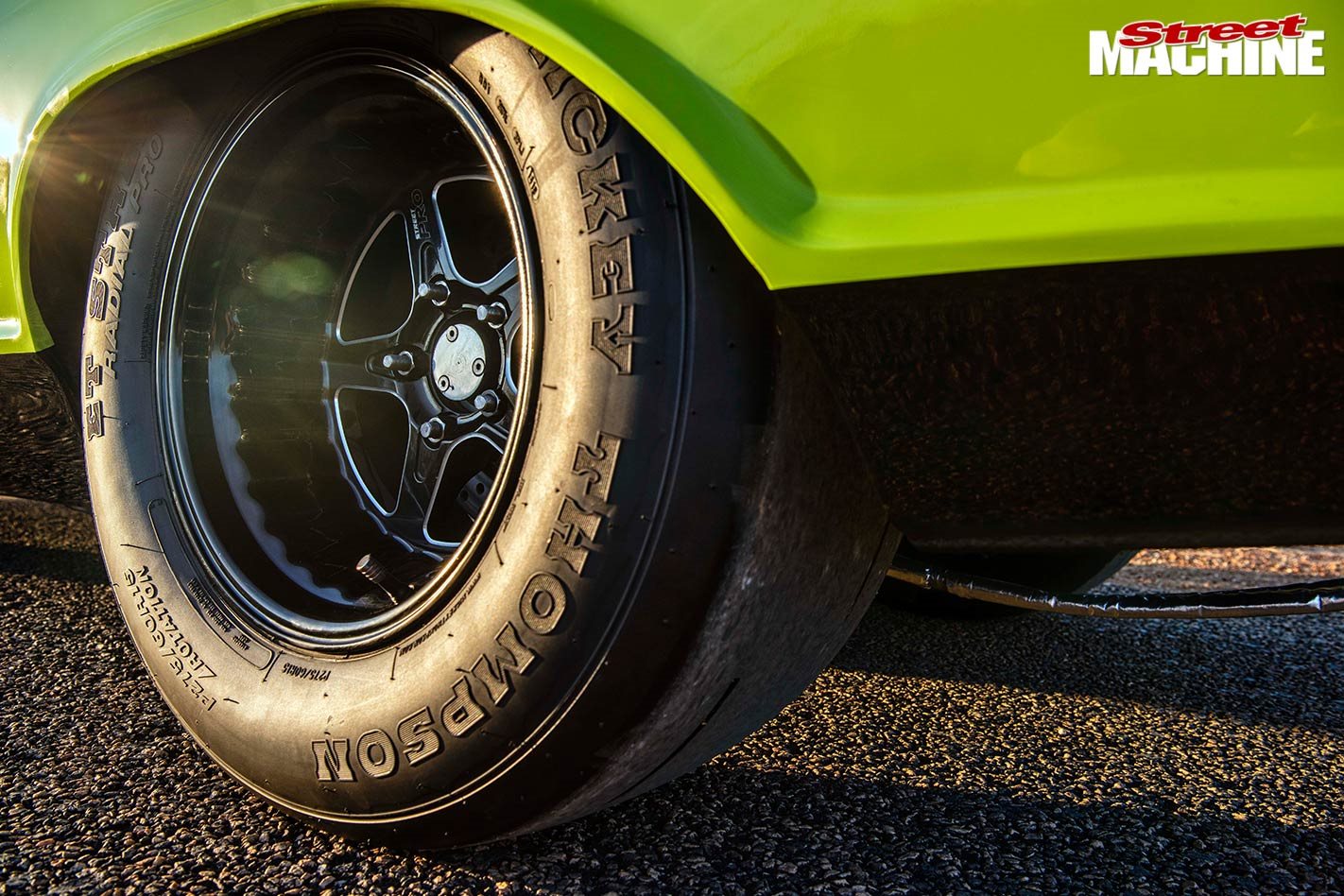 The engine was not an easy fit into the Torana. Barra motors are tall and long, and the crew also needed to make sure it was easy to work on when they were racing. “We started by cutting the firewall back and shortening the tunnel by about six inches,” Al explains. “We changed the sump to an FG-style one, which has a rear pick-up so we could clear the crossmember.” Even the inside of the bonnet has been totally trimmed out for a little extra clearance.

“There was no conversion kit for this set-up,” Al says. “Everything had to be made by us: engine mounts, front 18-litre header tank inside the front guard, fuel pump mount, crank mandrel – the list goes on.” 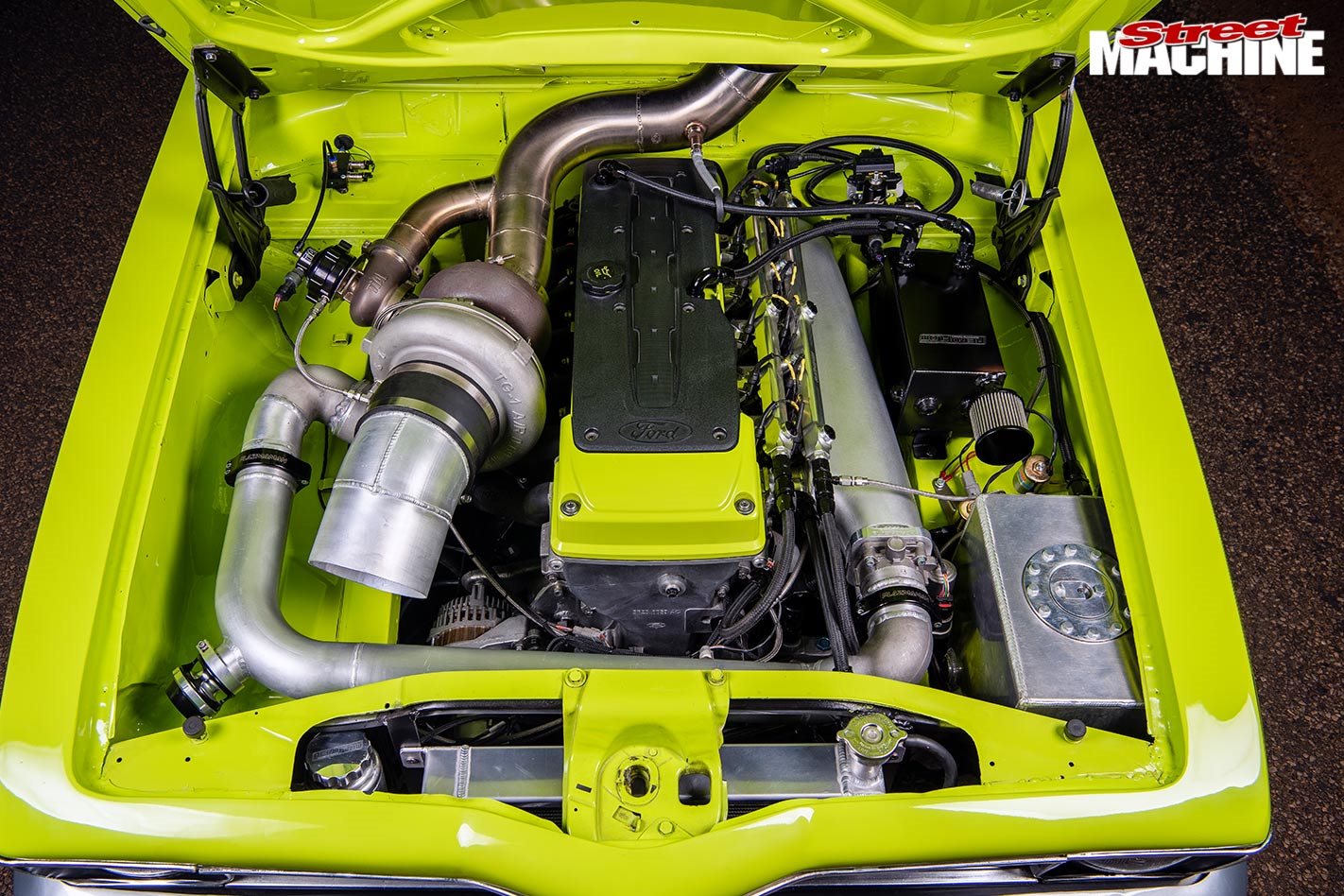 As the car was to be a racer, it was set up to run on alcohol, which meant a belt-driven 110 Enderle fuel pump and dual 2000cc injectors in each intake runner. “We don’t need that much injector yet, but we have plans to,” Al laughs.

“We have built the motor to a bit of a plan, and stage one is in the car now, with a stock crank, H-beam rods, forged pistons and upgraded everything,” he continues. That said, it still runs a stock head with a copper head gasket, fire ring inserts, 9/16-inch head studs, stainless valves and Crow valve springs.

“This motor is to get the car going and for the boys to learn how to drive,” Al says. “Once they get the hang of it, we will step it up with a better crank, cams and some head porting. This has been a plan that Rob and I agreed to so we can all learn the ropes.” 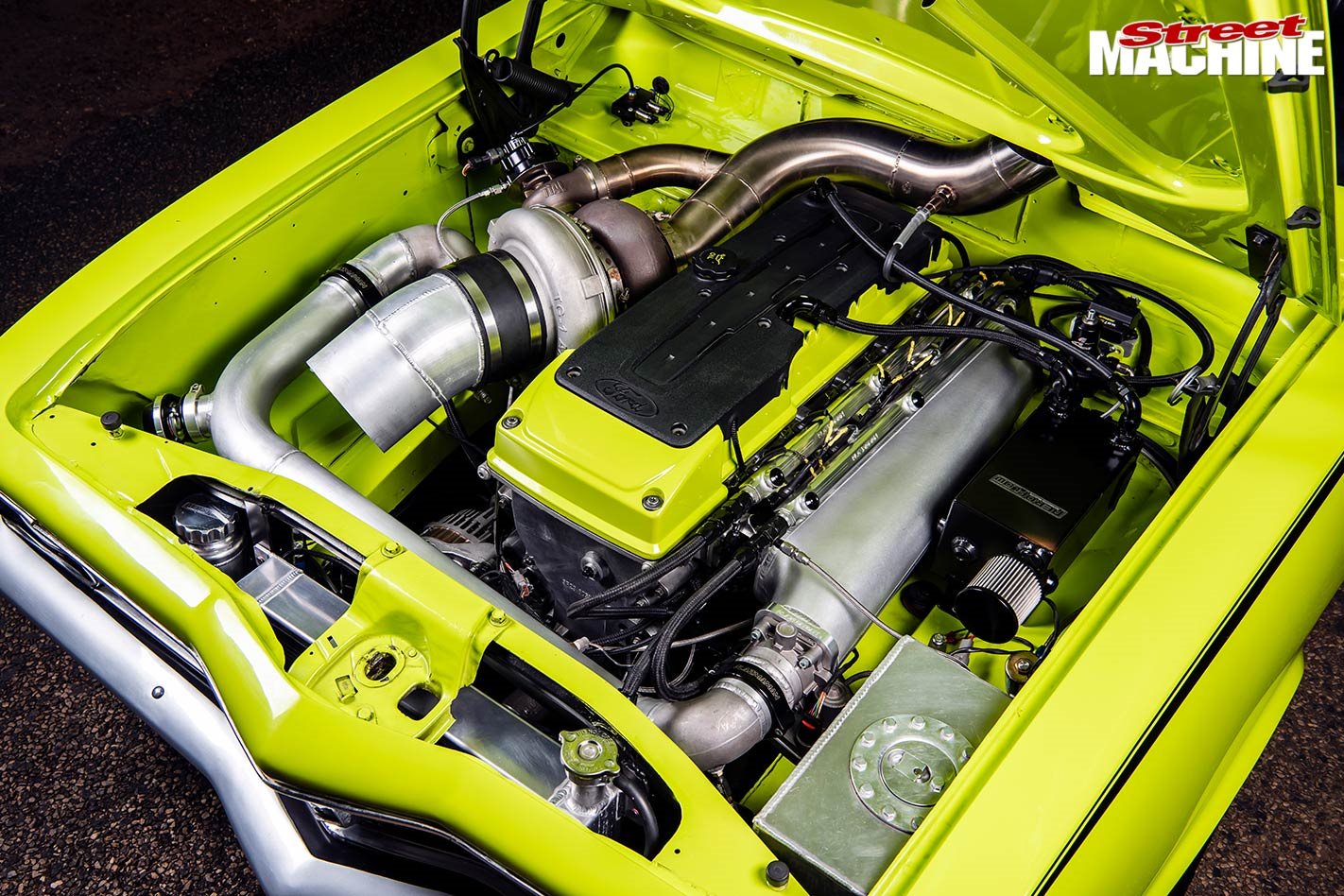 The engine still runs the factory Ford turbo manifold, which is why the massive GTX45 (80/82) turbo is peeking out of the bonnet. Once the boys get a bit of coin together they will build a custom manifold, reposition the turbo to behind the headlight and get everything under the lid.

Exhaust-wise, for now the car has a massive four-inch dump pipe hanging in the breeze, which Al reckons looks pretty wicked when you back off in the deep end with alcohol flames licking out. “All the experts told me the exhaust out the bonnet was going to burn the paint and that it would never work,” he says. “I’ve been running headers on nitro cars near bodywork for years without damage, and what do you know, we haven’t had an issue.” 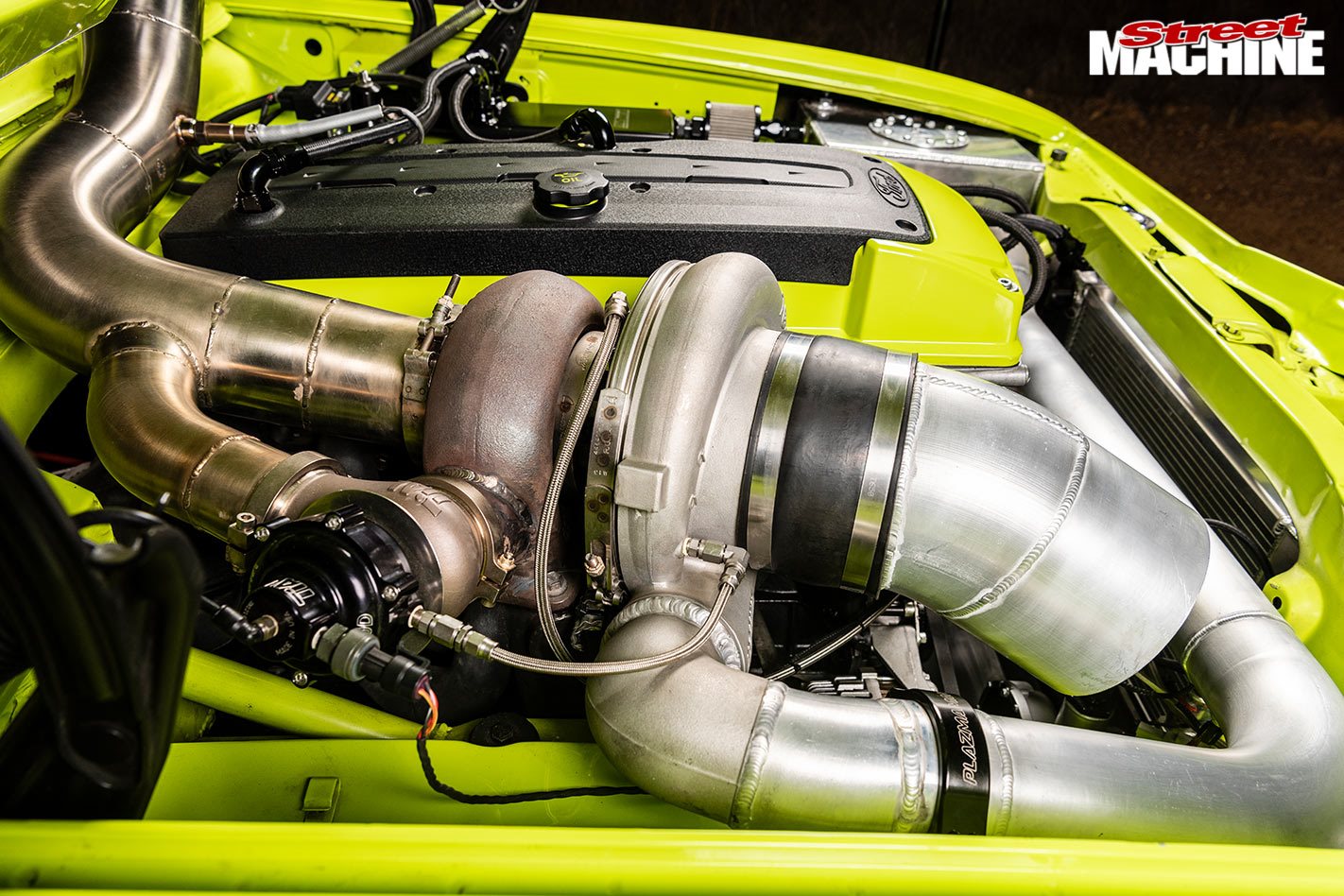 The boys decided to run the car up on a hub dyno to get a bit of a handle on things before they headed to the track. On 29psi, it cranked out 900rwhp.

Backing up the powerhouse is a pretty serious Powerglide trans with a two-piece Reid case, manual valvebody, Pro Brake and a 1.8:1 straight-cut gearset with a 10-clutch top gear drum. The converter is a 5000rpm AllFast item with a ringless input shaft on the pump. 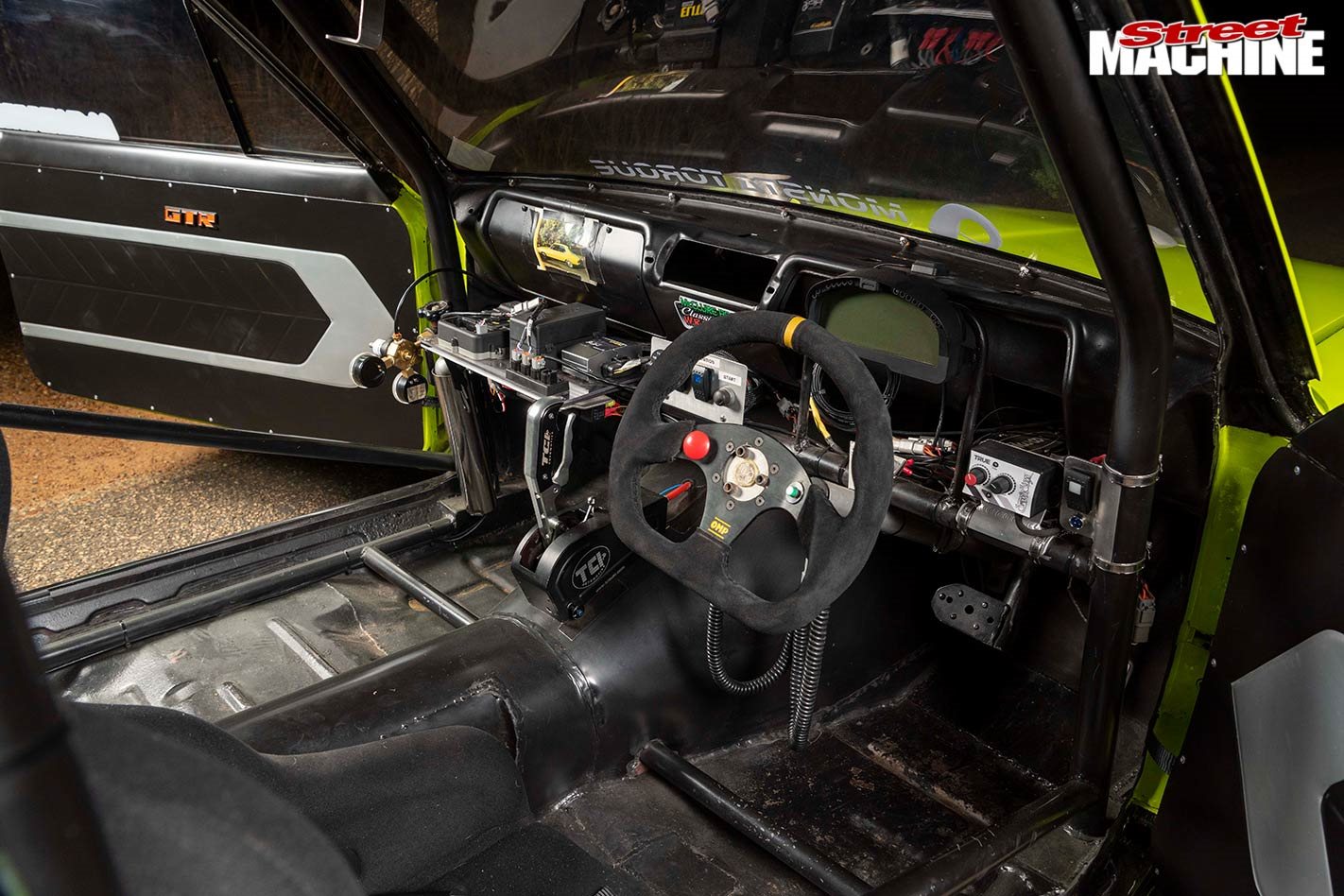 Everywhere you look, this car ticks all the boxes. Even the rear end has a floater nine-inch, which started as a 31-spline but has now been upgraded to a 35-spline after the boys busted an axle. The centre is a twin-rib nodular piece with 3.5:1 gears and a full spool.

The car is light, weighing just 2530lb before one of the boys climbs aboard. However, neither Connor nor Bailey has been treated to the same weight saving measures, each adding around 275lb to the package.

It was only natural that Rob from Monsta Torque would tune the car, which is fitted with a Haltech 2500T ECU. “We went to the track with a 15psi tune and went from there,” Al says. “We busted a few bits, found some weak spots, but ran 10s, nines, a bunch of high eights and ran a best so far of 8.48@160mph on a 275 Radial Pro. 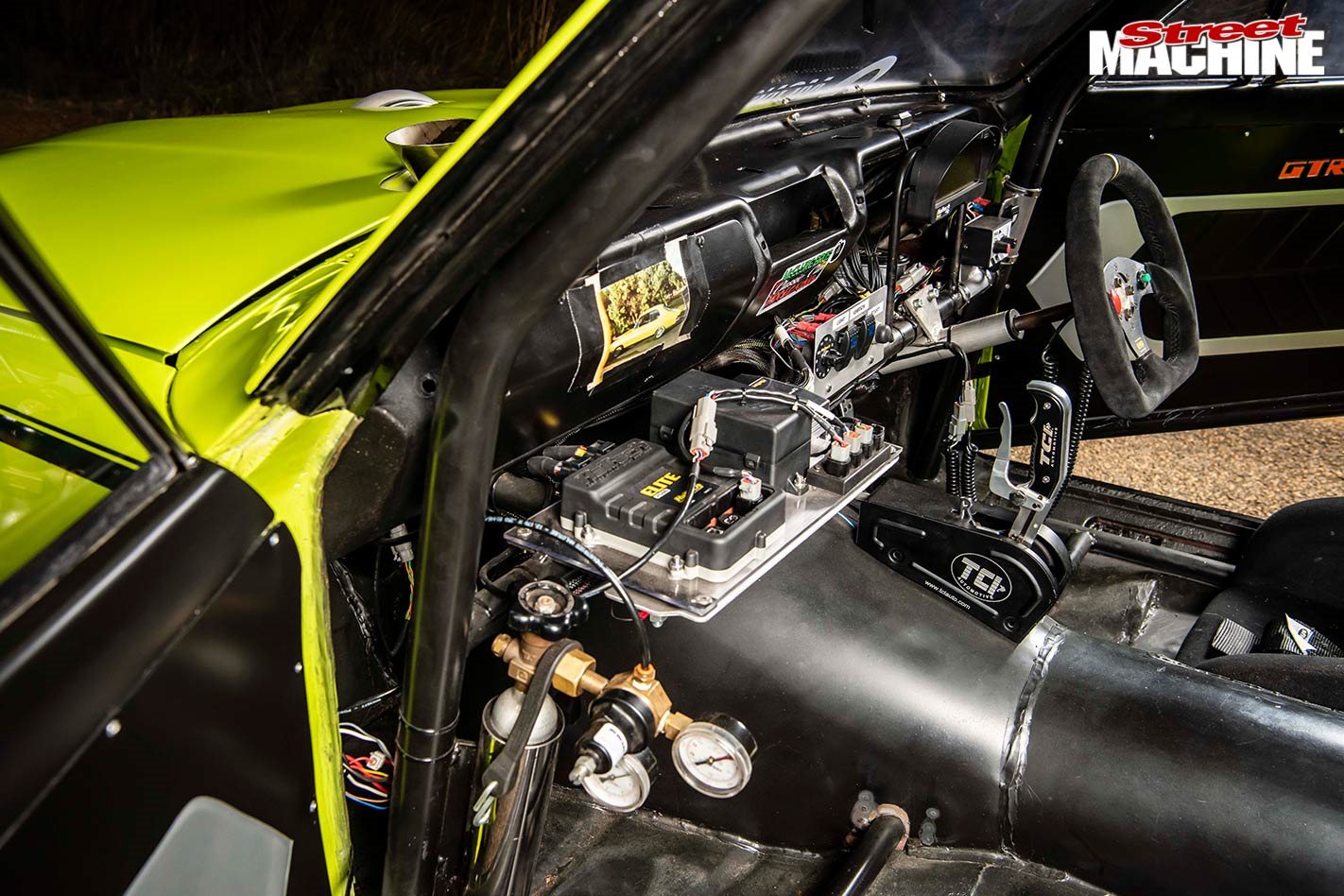 “We are confident of running a 7.90 with the stock cams, and when we move to the next stage of the engine build I see no reason why we won’t end up in the 7.50s.

“Right now we have 36psi of boost in the car, and see this turbo running out of steam at about 42. We only have 28 passes on the car and we had some rear end changes we wanted to try, but this COVID-19 thing has put the brakes on us.

“But it was awesome building the car with the boys,” Al concludes. “I was a painter years ago and put the jam on so that we could say we built that whole car in our shed.” 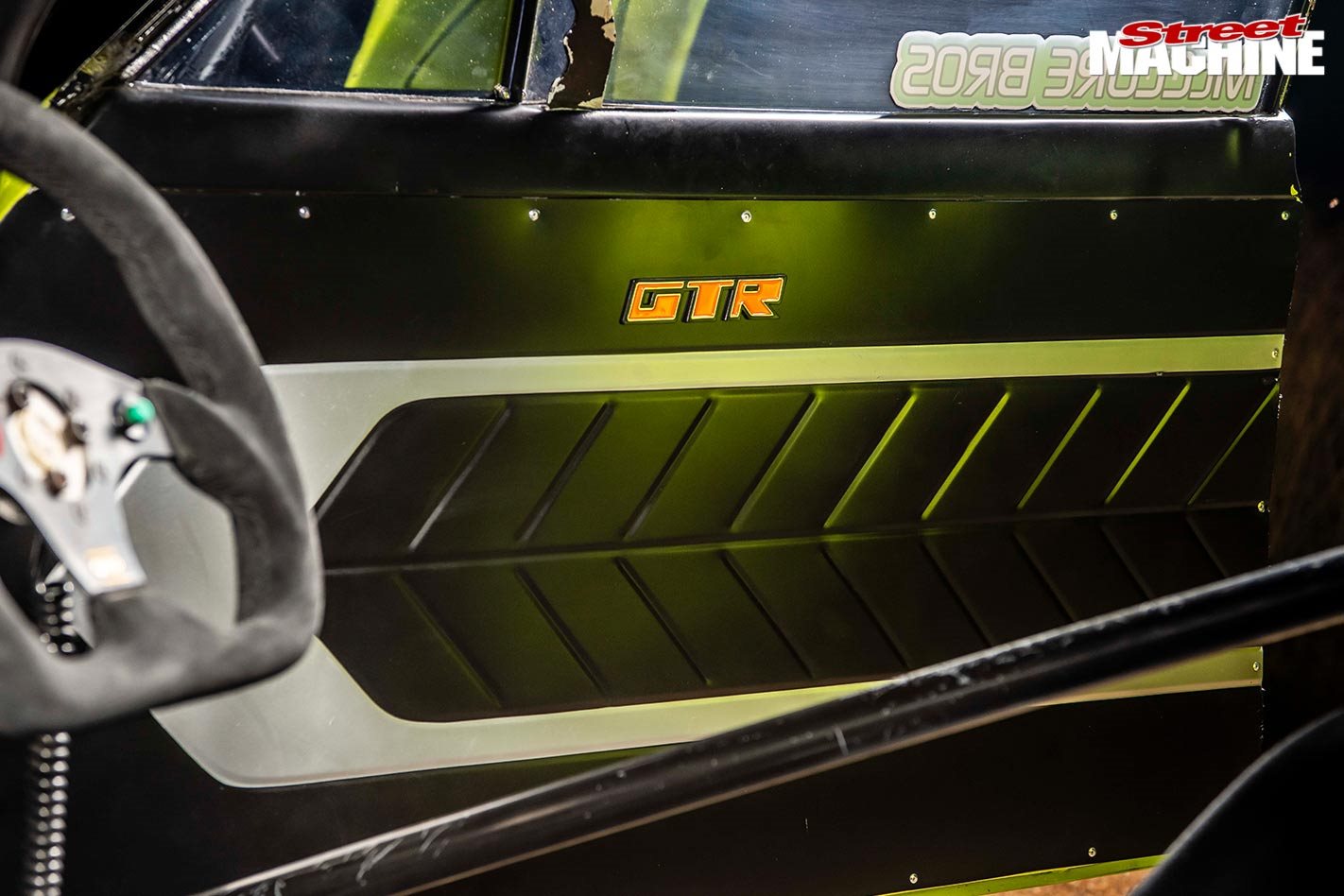 Of course, chucking a Ford donk in a classic Torana is always going to ruffle a few feathers. “You look around in drag racing and see Chevs in Capris, Hemis in all different cars, LS motors in everything, but honestly, we put a few pictures of our car on a Torana web page and we had people making death threats and telling us we should kill ourselves!” Al says. 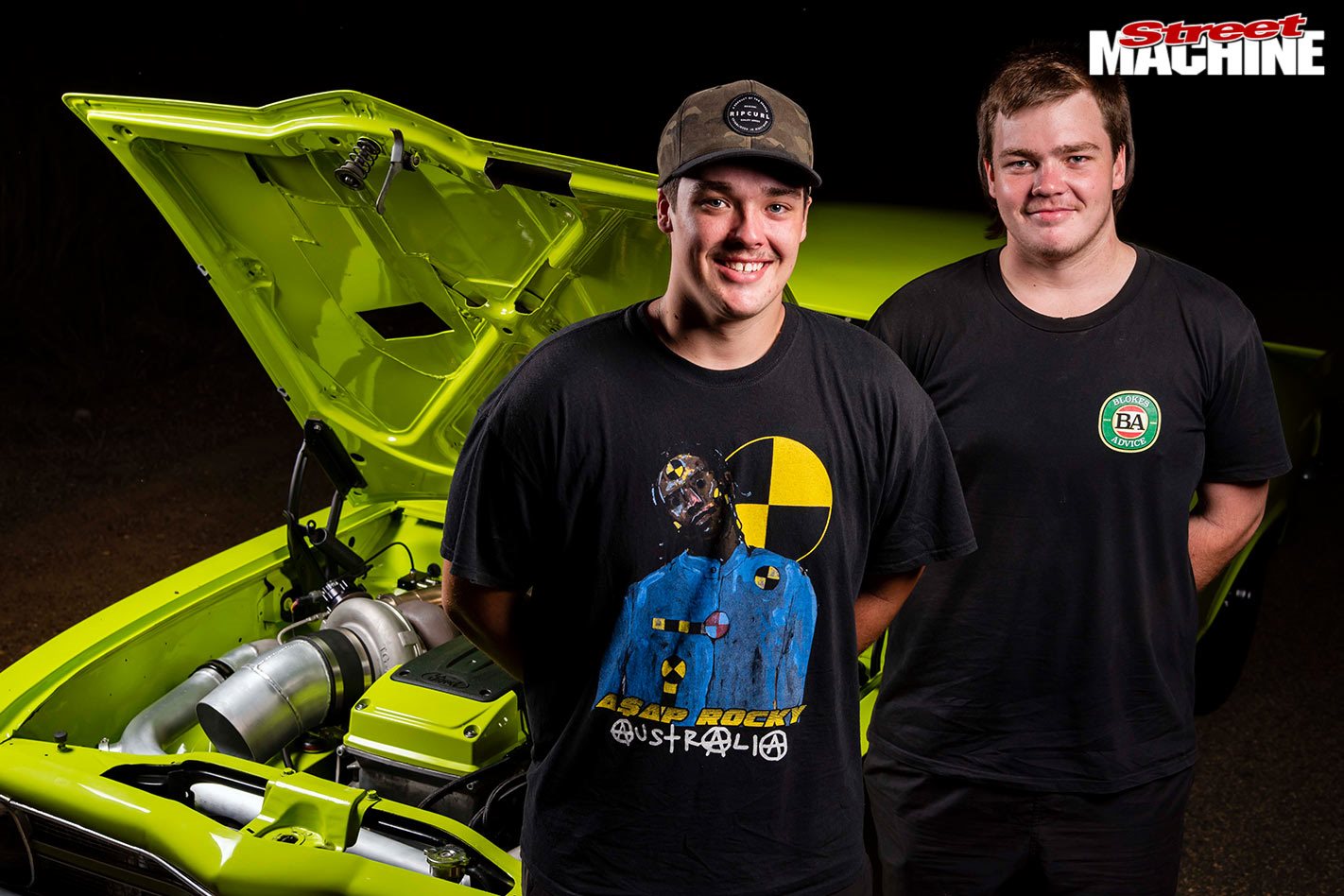 “Serious, it was crazy. People think we grabbed an immaculate car and fitted a Ford in it. It was total hysteria on the web pages.”

Well, we reckon those purists will be eating humble pie once this Barra-powered beast cracks the sevens!