WE’VE seen some crazy sleepers over the years, but one of the best would have to be the Barra-powered VE Valiant sedan of Mick O’Halloran from the ACT.

“I was checking out Gumtree and a guy was selling it with a blown head gasket,” Mick recalls. “The car had a new paintjob and because it didn’t run and possibly needed an engine, he couldn’t shift it. Well, one trip to Newcastle and six grand later, it was sitting in my garage. “I started looking for a motor and I came across a guy selling a crashed BA XR6 just around the corner from my house for just $1300. The car had hit an Armco and he couldn’t start it, despite there really not being much damage to the car.

“The seller had spent a ton of money on it with injector upgrades and a turbo off an FG Falcon, as well as a bunch of other mods, mostly body. He nearly died when my sparky mate got it running in about 30 seconds!”

Mick and his mates stripped the car down and found a company on Facebook that specialised in Barra conversions. For just $200 the loom was stripped and the body control module removed, so there were only about four wires to hook up to get the motor running. With the BA motor being front-sump, Mick bought an FG motor for $250 for its rear sump set-up, which was a better fit for the Valiant. 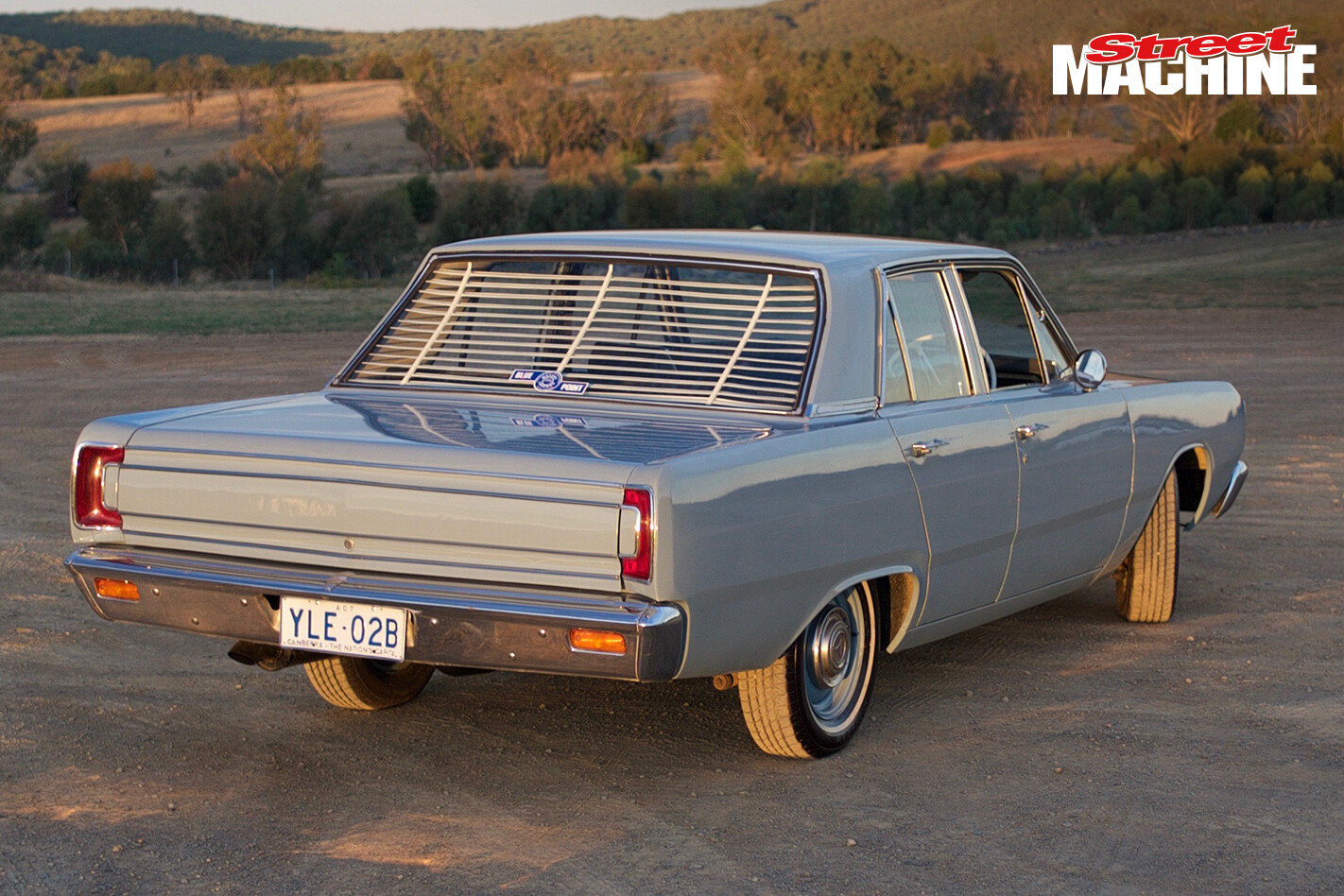 “My mate Scotty got the motor in with no problems, without a single modification to the transmission tunnel, K-member or engine bay,” Mick says. “Using the factory Ford mounts we made adapters to go to the Valiant K-member and had to make a new gearbox crossmember. Initially we wanted to run with the six-speed auto from an FG, but there wasn’t enough room in the tunnel, so we ran a BA four-speed. In fact, the only thing we had to modify was the inside reinforcement at the front underside of the bonnet where it touched on the rocker cover. “We had a few issues when we tried to get it running,” he continues. “The car was just in limp mode due to the loom being set up for a manual transmission, so we added a speed sensor and we were away. Being a six-banger, there was a ton of room around the starter motor near the steering box, and the only part that is a little close to the body is the turbocharger.”

Knowing that the car was destined to make reasonable power, Mick had M&A Engineering in Canberra build a new drum-to-drum nine-inch differential with Truetrac and 4.11:1 gears, matched to a custom-built tailshaft. 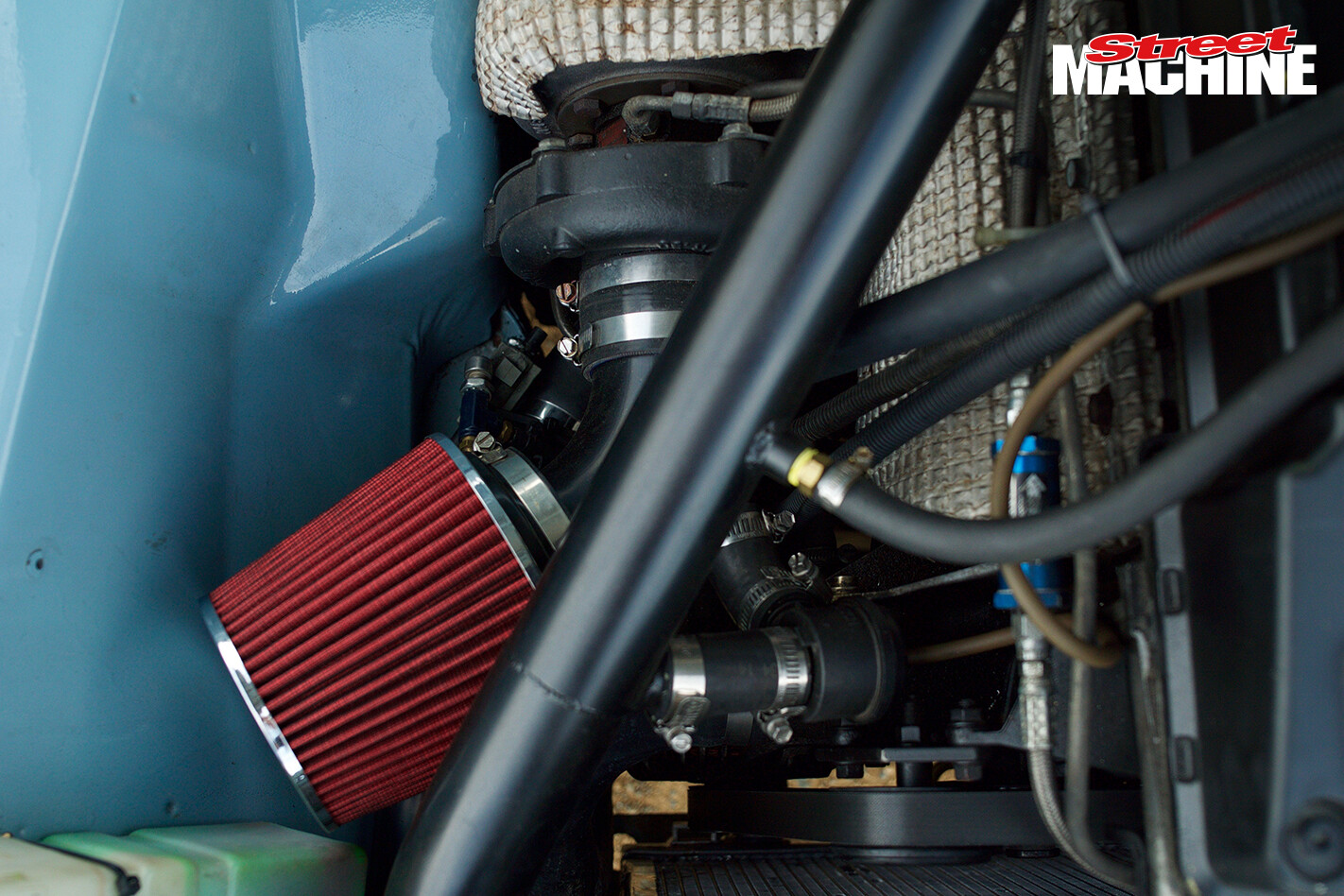 Fuel supply is courtesy of a pair of Bosch 044 pumps plugged into the factory tank, and the boys even fitted the factory intercooler up front, but went for an aftermarket B&M shifter on the stock auto.

“We sent the ECU back to Barra Conversion and initially set the car up on 16psi of boost after having a flash tune done,” Mick says. “I’ve since decided to wind that back to 10psi, as the car gets out of shape pretty easily on the butter-cutter tyres on the rear. It’s a lot of fun and pretty scary on boost! I’m going to get some widened factory-style rims so I can squeeze a bigger tyre under the rear. “The Mopar guys just love ragging on it; they hate it. I’ve spent so much on 265ci Hemis to make 200hp, so I say: ‘Go ahead and hate it, I’ll see you at the track, or cruising past you broken down on the side of the road!’

“A while back I did a 1UZ Toyota V8 in an AP6 and had guys telling me I had destroyed the car. Let me tell you, that car is mint; it is so good to drive.

“As for the VE, I’m not looking for big power, just something family friendly; I fitted five seatbelts to the car last week, so the whole family can cruise in it. The only downside is that I don’t have a lot of room for my thermo fans at the moment, so it’s an area I need to address shortly as the Canberra weather has been scorching lately. Apart from that, it’s all fun times.”