BEHIND THE SCENES OF THE DRAG-ENS RATTLE TRAP BEACH SPRINTS

SATURDAY 6 May saw the first Rattle Trap beach sprints event take place at Crowdy Head on the NSW mid-north coast, and by all reports it was a resounding success, with many feeling it raised the bar for Australian hot rodding events. Hosted by the Drag-Ens hot rod club, Rattle Trap is styled on The Race Of Gentlemen event in the USA, and treated spectators to the sights, sounds and smells of 60 traditional hot rods, specials and motorcycles battling it out against a backdrop of sun, sand and sky. 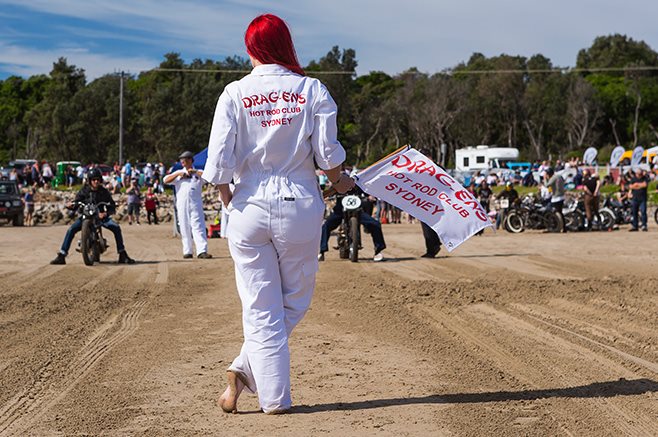 For entrants, the runs were plentiful, and the surface was perfect .The crew were dressed sympathetically to the era of the cars on display – no high-vis in sight!

Drag-Ens president Andrew McClelland and fellow member Garry Ward came up with the idea for Rattle Trap back in 2014. For Andrew, it was the Mud Run in Gresford, NSW, that provided the inspiration. “It was laidback, no egos, just people enjoying their cars,” he says. “I’ve enjoyed the events management side of Valla; Rattle Trap was a chance to do something small, focusing on traditional hot rods as opposed to the more street rod-oriented aspect of the hobby.” 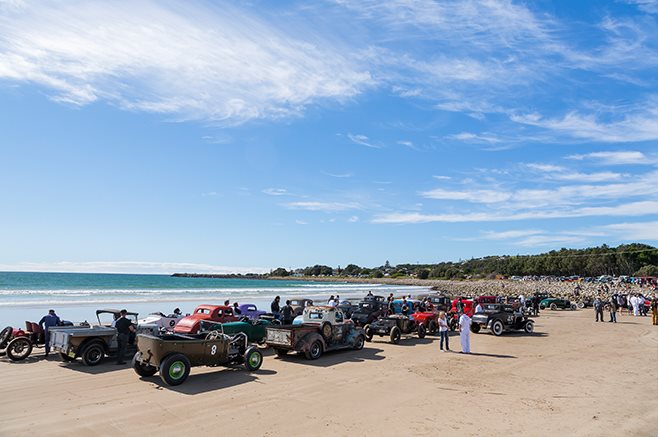 With 65 members, and having hosted 41 consecutive Valla Rod Runs, the Drag-Ens easily mustered a crack 15-member committee to bring Rattle Trap from concept to reality. Then the hunt was on for a suitable beach location to stage the event. 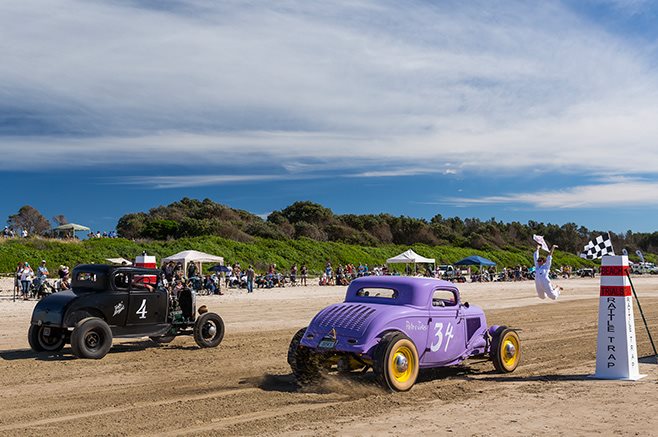 The Australian Confederation of Motor Clubs proved very helpful in this regard, along with 4WD clubs, who are experienced with both red tape and beaches. In the end, Crowdy Head proved to be the perfect spot: suitable tides, entry, amenities and a huge campground nearby. It’s on Crown land and accessible via permit. 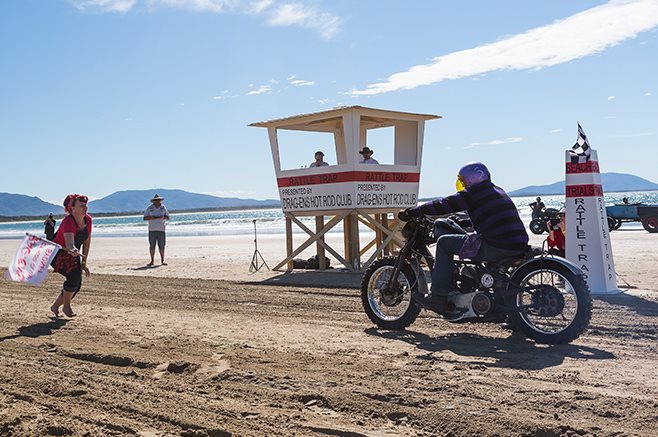 A 20-page application was submitted, with each ‘T’ crossed and ‘I’ dotted on everything from Portaloos to fencing. Tide charts were consulted, and the May date set. 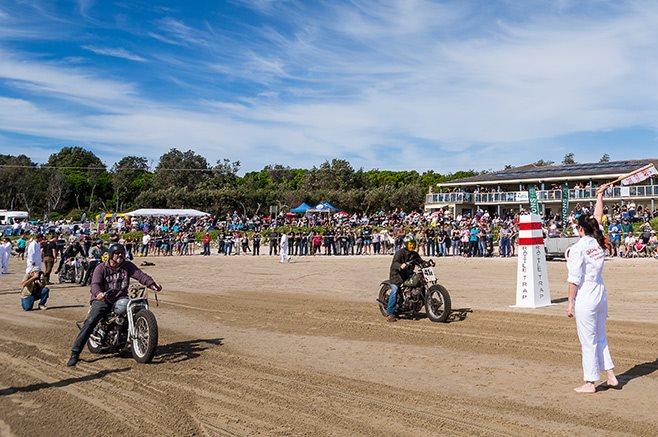 “We were thinking we might run a few HAMB dragsters if we didn’t get the numbers, but we ended up having to turn people away,” Andrew says. In the end, entries were capped at 48 cars and 14 bikes so that everyone got a decent go. Track marshalling was expertly handled by Drag-Ens member Cory Longfield, who has considerable drag strip experience in funny cars. 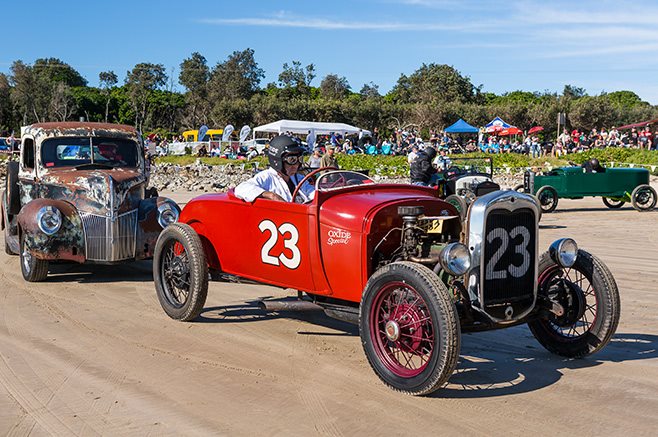 With 2000 people in attendance on the day, there aren’t any plans to expand, but the Drag-Ens are keen to run the event for at least three years. “We’ll probably have to move the entrants on to let some new people have a go,” Andrew says. 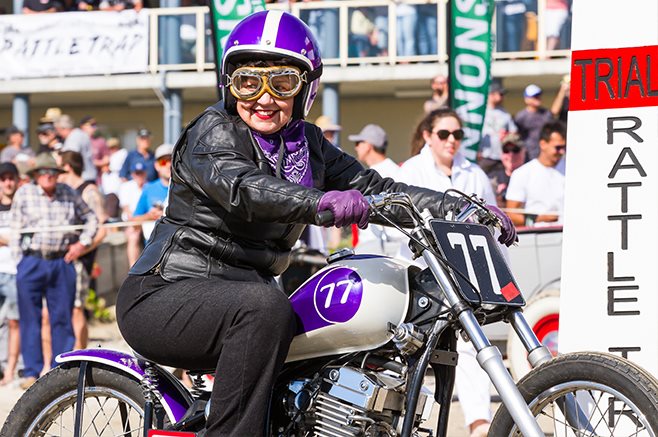 Events like Rattle Trap are breathing new life into Australian hot rodding, but like a good magic show, the key to success is what happens backstage, beforehand, thanks to good planning and a great crew. The secret, Andrew says, is to “remember that everyone you have to deal with is just people trying to do their job. The question I ask is: How can we work together and make this happen?” 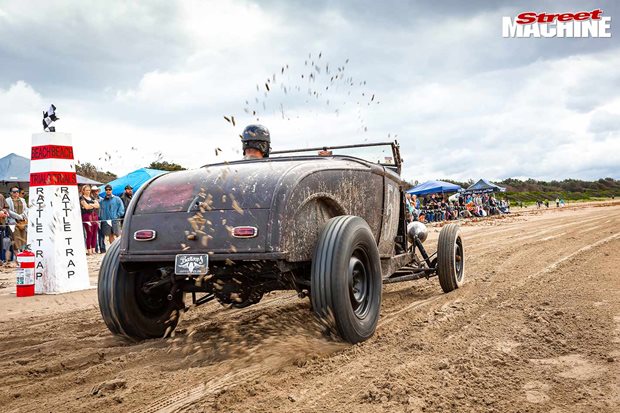 Rattletrap pays homage to the origins of hot rodding on the beach at Crowdy Head, NSW