“IF YOU cut me, I’d probably bleed blue blood,” says Kiwi Ford fanatic Barry Featherstone. And once you spend a bit of time taking in his mind-blowing collection of FoMoCo iron, you’d be pressed to doubt it. 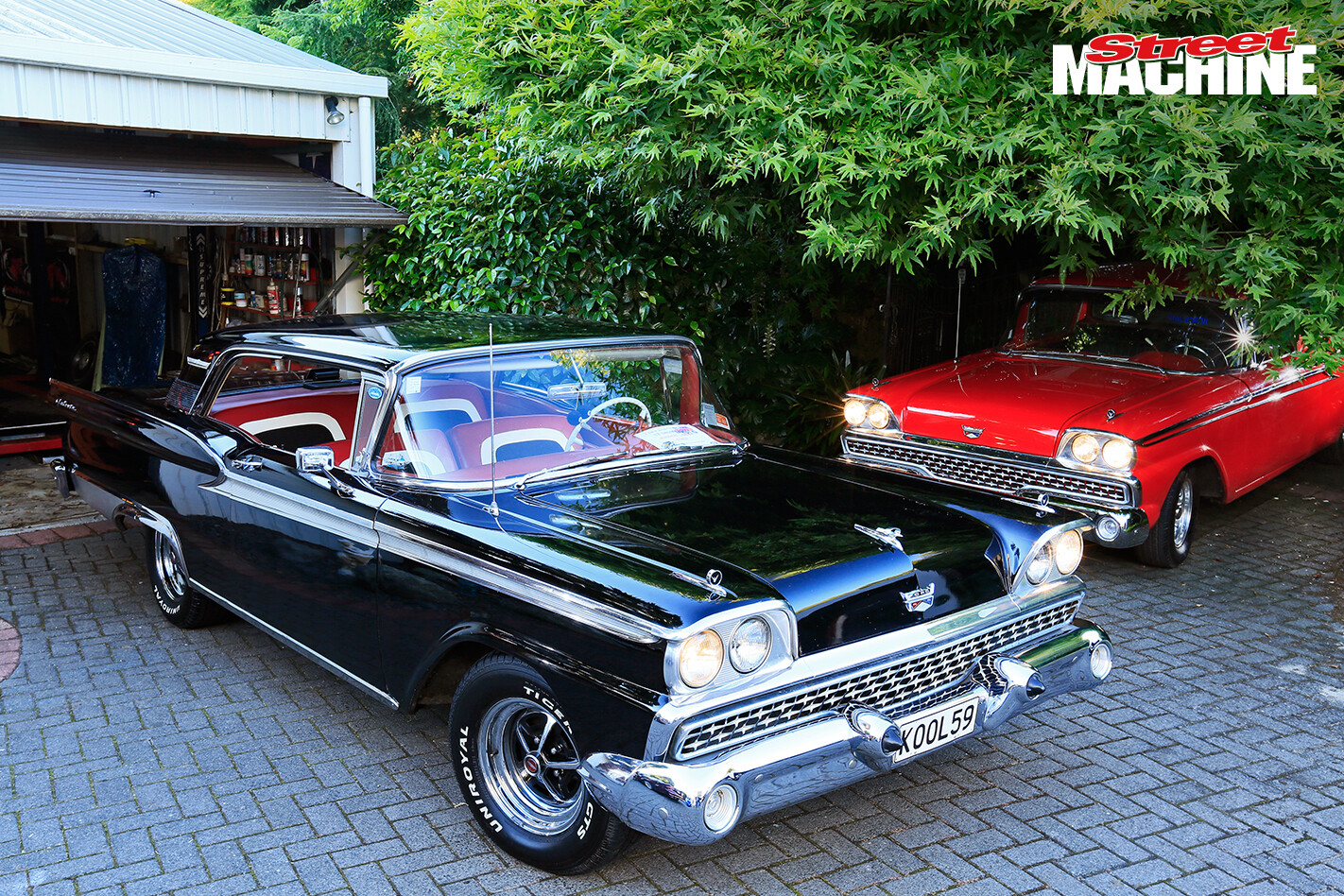 Let’s start with the quartet of blood-red Stangs. “I wanted one of all the significant ’69s,” he said.

His stable of Ponys includes a Mach 1, Shelby GT350, Shelby GT500 and the big daddy of ’em all – a Boss 429. They’re all genuine and they’re all original. In fact, his Boss 429 still has the original paint; it’s an incredible piece of history.

Mind you, after more than 40 years of polishing and with 30,000 miles on the clock, the Boss has genuine patina. “People tell me I should restore it. Why the hell would I want to do that? It’s one of only a few 100 per cent correct and 100 per cent original Boss 429s in the world. When I go to Ford Heaven, I want the car to stay exactly as it is – might even get buried in it. I’ve got every part that ever came off that car, the original plug leads, pistons, exhaust, keys – even the original purchase ID card from Ford.” 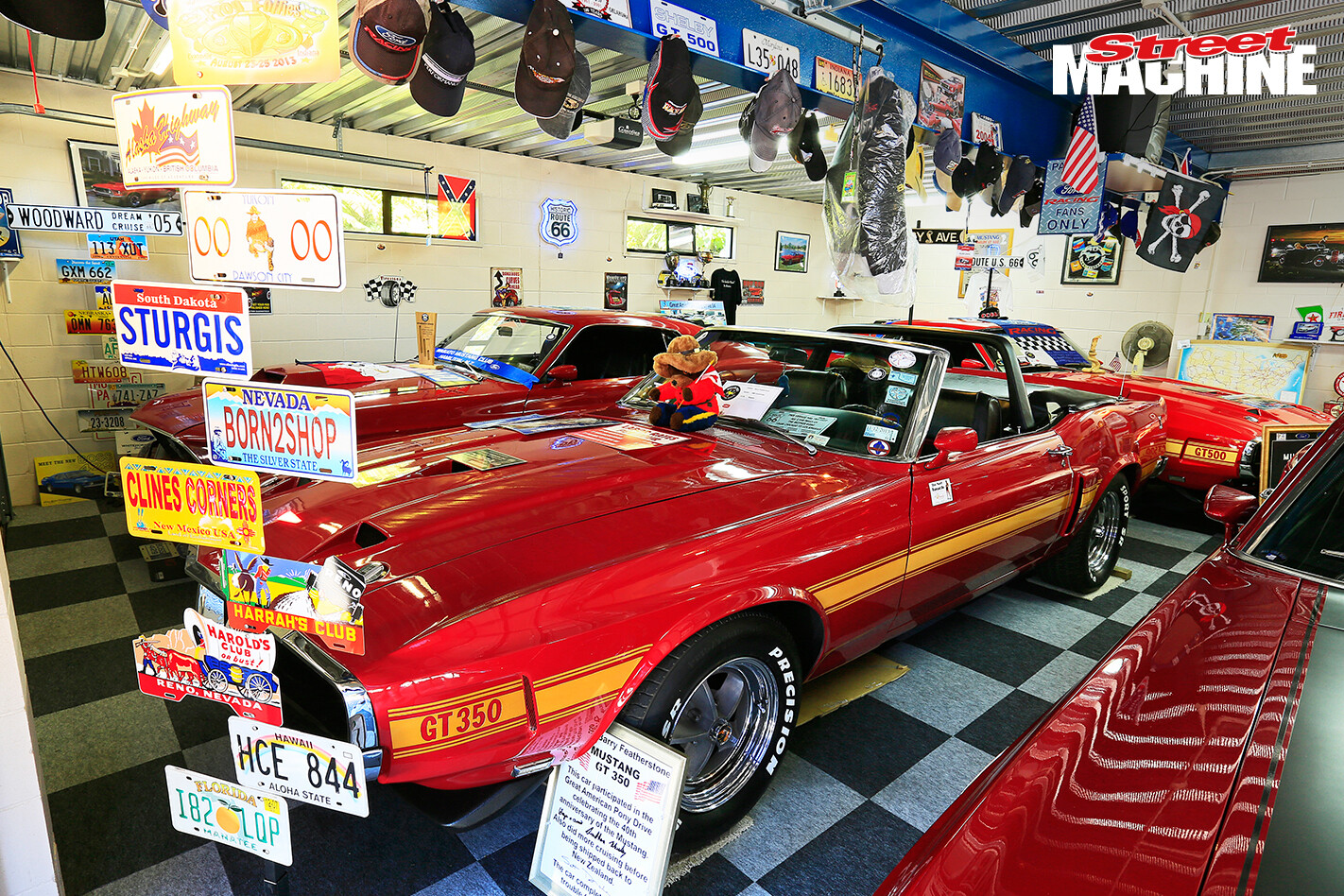 Then there’s the GT350 convertible. In 2004 Barry attended the Mustang 40th Anniversary in Nashville and spent months tracking down a mint 350 to take. Afterwards, he and wife Gail took the Shelby on a 10-week, 9000-mile (14,400km) driving holiday; that car has seen more of the US than most Americans. 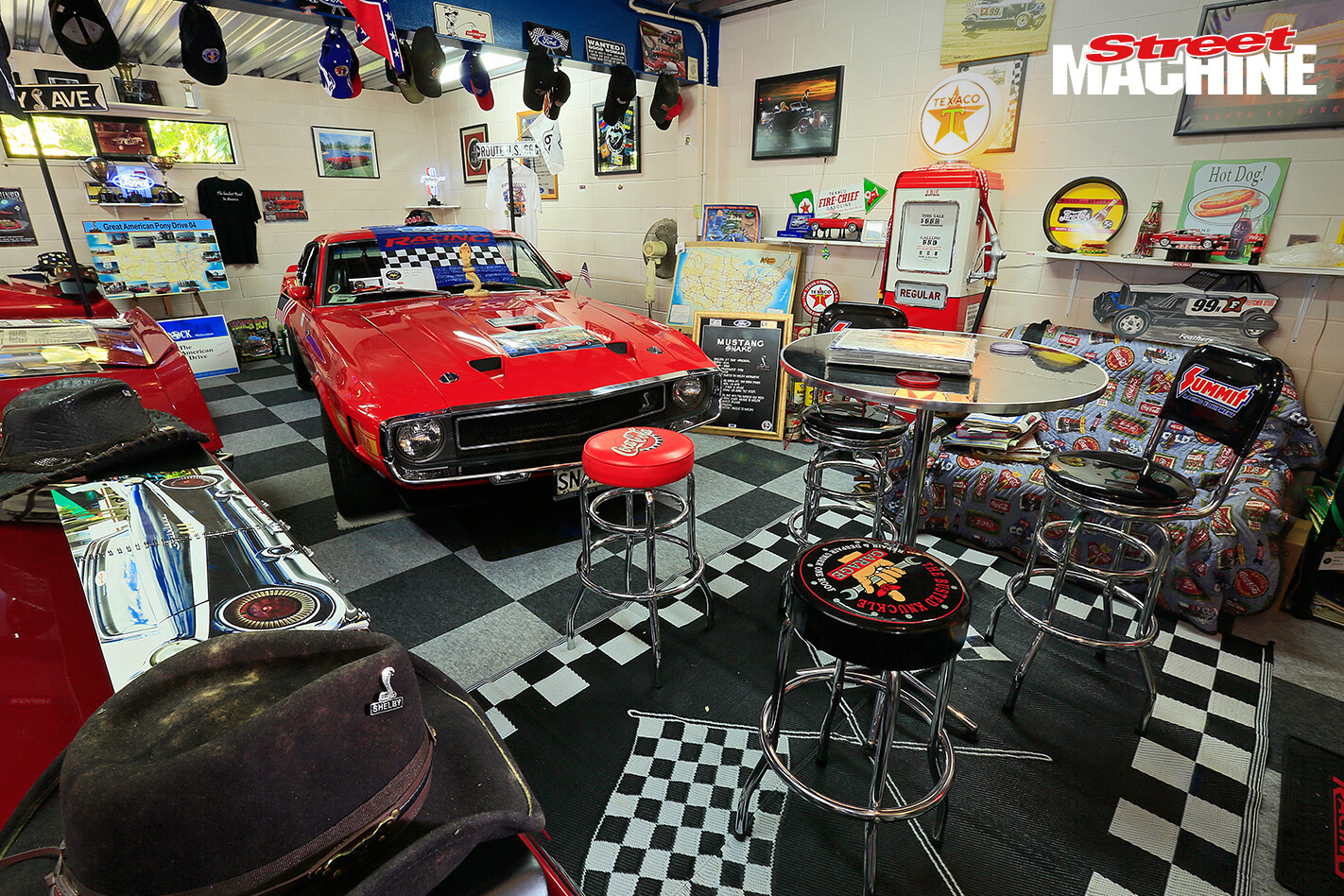 The 350 also gave Barry a huge scare. He was backing it out of his shed when a fuel hose let go, dousing everything in petrol. “I heard this ‘WHOOF’ and smoke started pouring out through the bonnet vents. I jumped out, opened the bonnet and the flames hit the roof. Luckily there was a high-pressure hose handy and I drowned it. Somebody was on my side that day because I could have lost the lot. I was shaken for days; I never want to go through that again.” The Mach 1 was his first pony and also has plenty of history. Barry purchased in Queensland in 1979, when he was working here in Oz.  Work took him to Perth, so Barry drove the Mach 1 across the Nullarbor and much further.

After travelling around a big chunk of WA, it was time to head home to New Zealand. On the return trip, Barry decided to see what the old girl would do. “Not a lot of traffic back in the early 80s. I ran that thing hard. Managed to average over 100mph right across SA. It ran like a dream, did it easy, it just hummed.” He found his GT500 in NZ. The story goes that it was stolen early in its life and painted matte black. After being recovered several years later, it was bought back by the original owner, who then sold it to Barry. 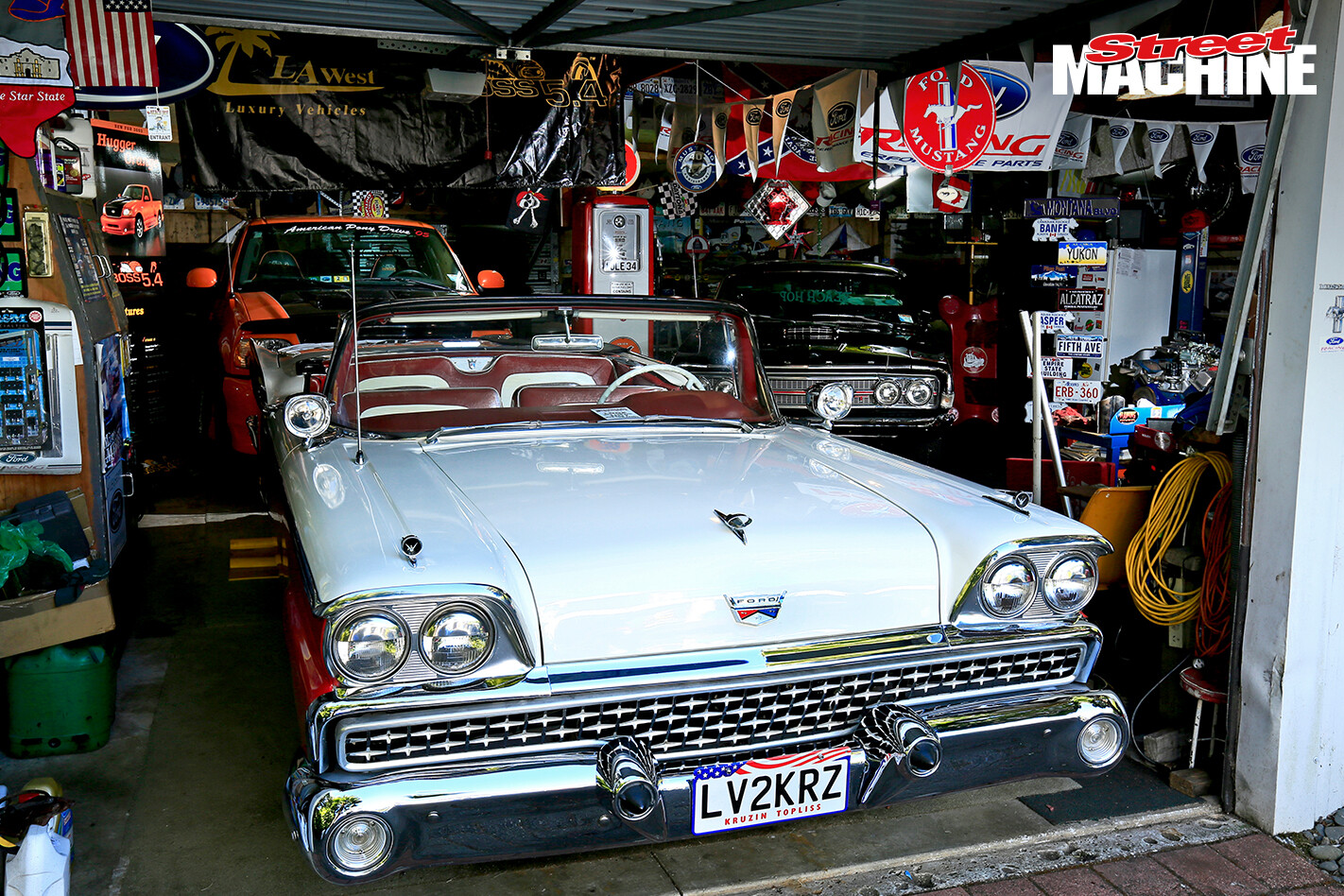 Barry reckons Ford got things pretty right in “the nines”. In addition to the Stangs, his sheds contain some ’59 Galaxie/Fairlanes – a Skyliner Retractable (its steel hardtop folds into the trunk), a coupe and a Ranchero – and a ’49 Bonus-Built pickup. His non-’9 cars are a ’34 five-widow coupe (all-steel, unchopped, on original rails), a 2003 Boss 5.4-litre truck, a ’97 30th Anniversary EL GT Falcon and of course the triple-black (black duco, black interior and black convertible top) 1983 GT-HO Mustang that Barry and Gail keep at their beach house. While Barry has always brought memorabilia home from the States, things became far more serious after 2000. “I started bringing in a lot of cars for myself and others, so I’d pack the containers full of stuff. I have number plates from all 50 states, with many double-ups, and many special historic issues. I also like my vintage gas pumps and traffic lights.” 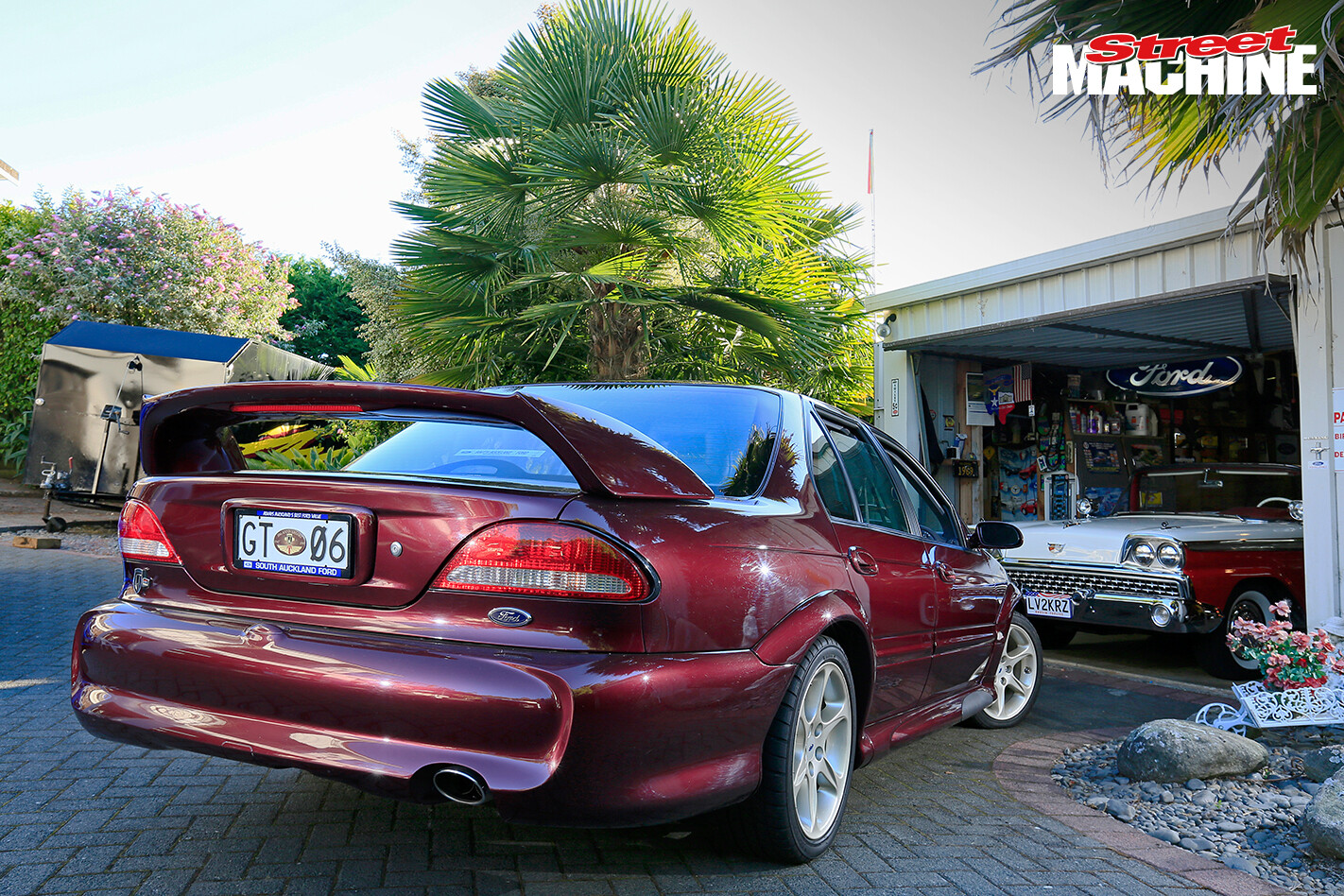 He’s also collected a host of 289, 302, 428 Cobra Jet and 460 engines – all of which are waiting for a home. There’s not a bare wall or empty hanging space in sight. And, like the cars, all the memorabilia is in mint condition and, of course, original.

“I try to only buy original. I don’t like repro. There’s something nice about having original stuff; you get it back in the end.”