As a youngster, Derek Grundy watched this 210 Chev race. Rescued and returned to the street, it was just as quick!

MORE often than not, 11-second street cars get further and further away from their street roots and end up full-house race cars with rollcages, tube chassis and alcohol-guzzling monster engines. Not that we necessarily have a problem with that. 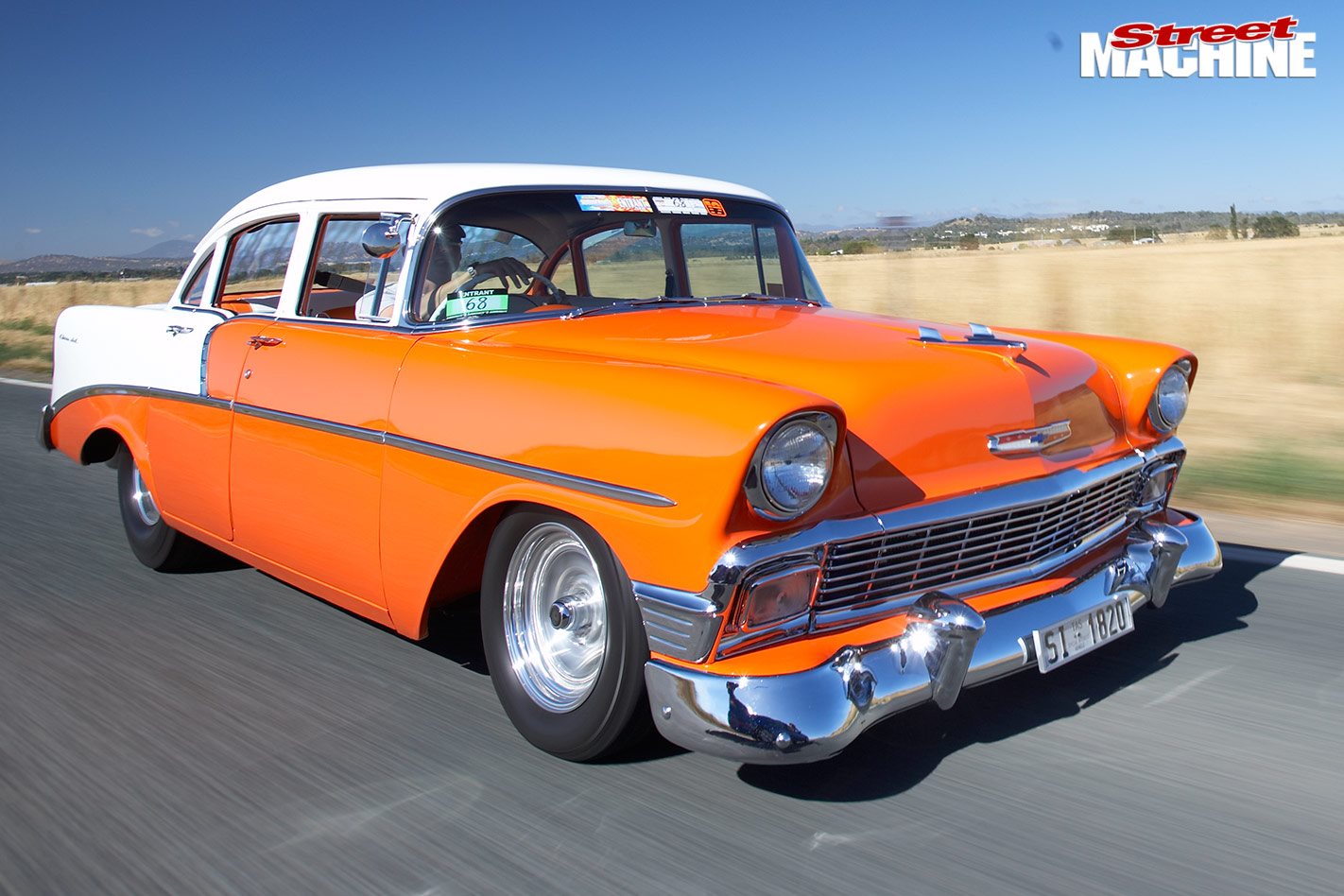 But it’s nice for once to see a car rescued and returned to the street. Not that this car really needed rescuing or was ill-treated; far from it.

Back in the mid-80s, this ’56 Chevy was black, had a flip front, big-block power and ran mid-11s at 130mph! Back then that was a serious bit of gear. The owner was a bloke called Ron Quinn. 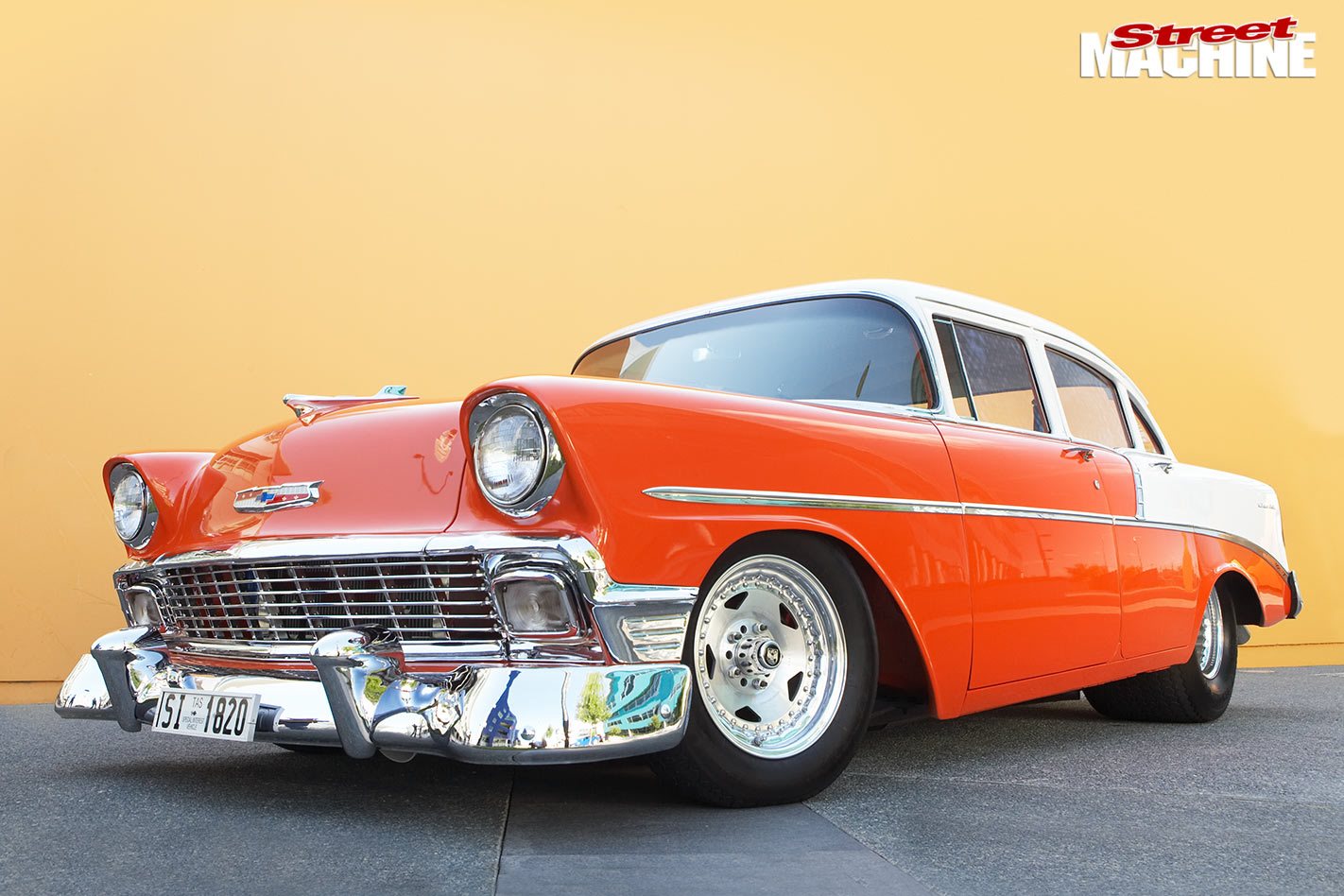 Ron retired the big Chev from active duty in the late 80s, stuffed the big-block into a Capri and ran low nines. The same engine then went into an Altered and Ron became the first guy in Tasmania to run eights. 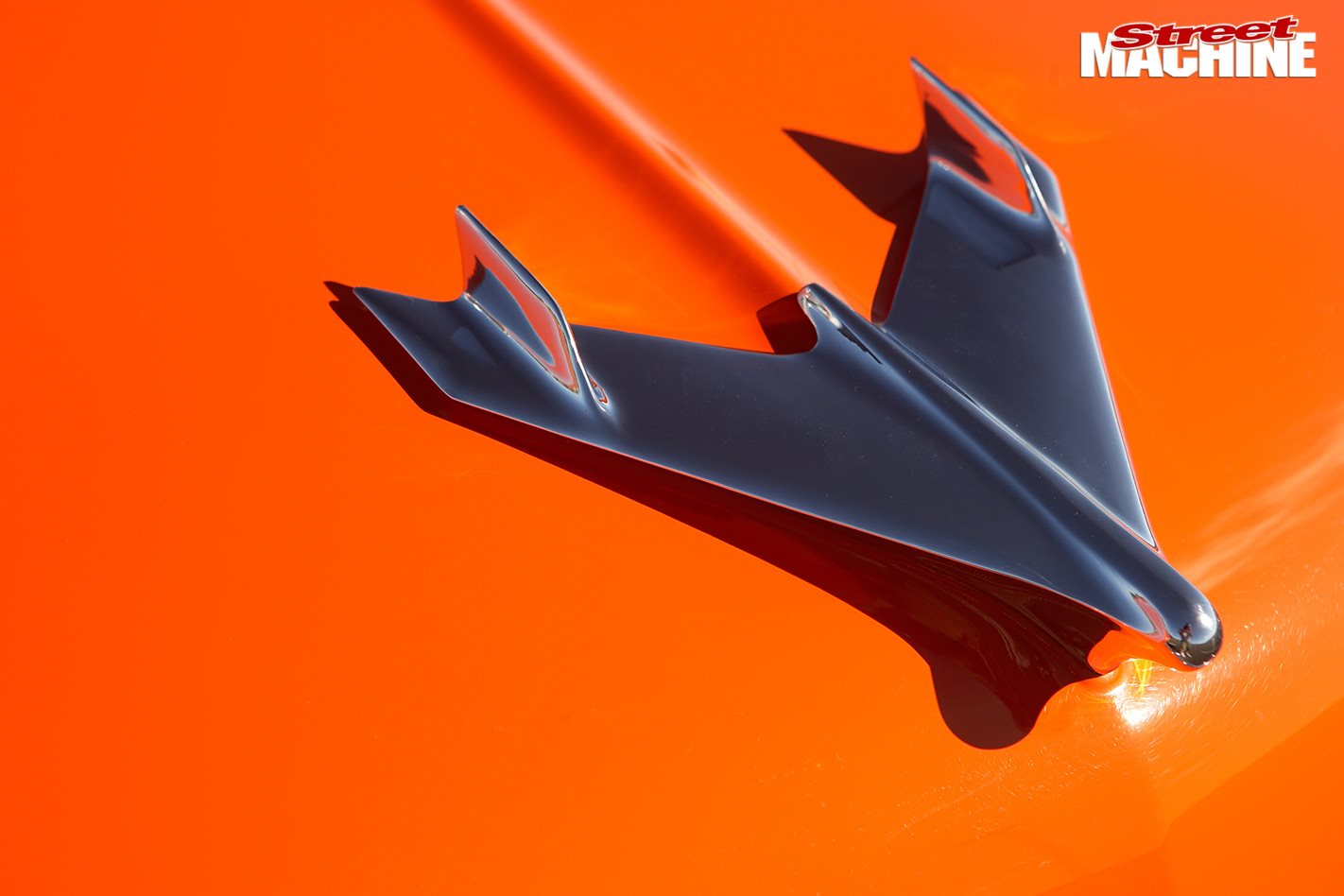 Ron retired in the mid-90s and it wasn’t long before Derek came knocking: “I had wanted a tri-series Chev for a long time. As a young fella I used to watch the ’56 race and always admired the car. It had a tough big-block, tilt front, nine-inch and a ’cage. The flip front was a bit crude — Ron used to hold it up with a dog chain but it never fell on his head, so it must have been okay,” Derek says.

Ron wanted the car to go to a good home and that’s one of the reasons he sold it to Derek. As it was only driven on Sundays — a quarter-mile at a time — the car was in really nice condition. Ron bought it in the 70s for just $300 but he’d never had it on the street; it was strictly for racing. But even then he knew it was too nice to cut up, so it was never tubbed. Which meant that all those years later, Derek had a nice car — to cut up! 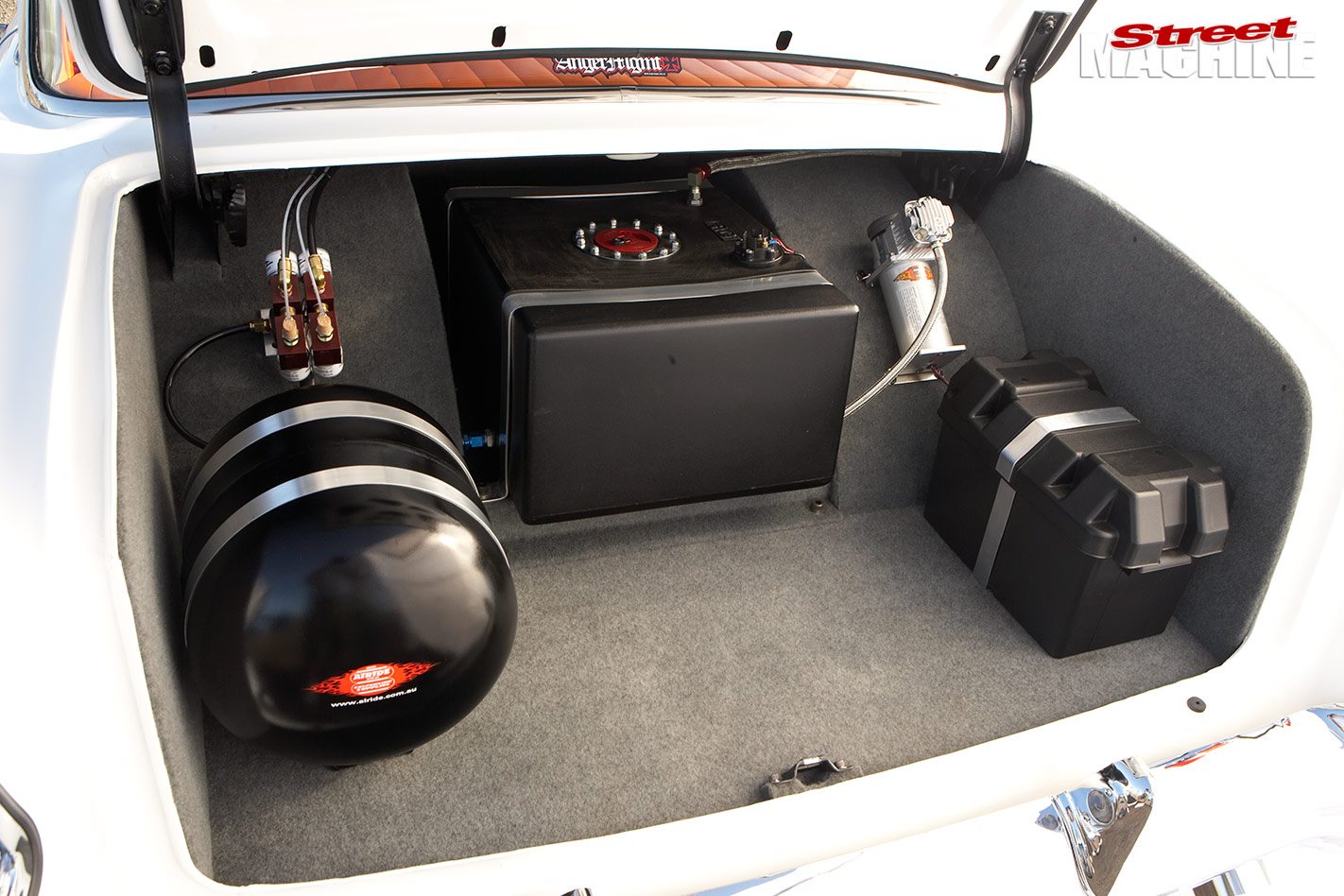 As the car was already set up for a big-block there was no need to change anything there. Derek had Greg Farrelly from Fazza Race Engines build him a tough big-block. The 454 has been punched out to 468 cubes and breathes through a set of ported heads fitted with Yella Terra Platinum shaft rockers. From the factory they came with big valves — a massive 2.19in on the inlet and 1.88in on the exhaust — and they’re worked by a Crow cam.

A big engine needs a big carb and Derek chose a Holley 1050 Dominator to bolt on top of his Victor 454R intake. Filling the bores are lump-top TRW pistons. 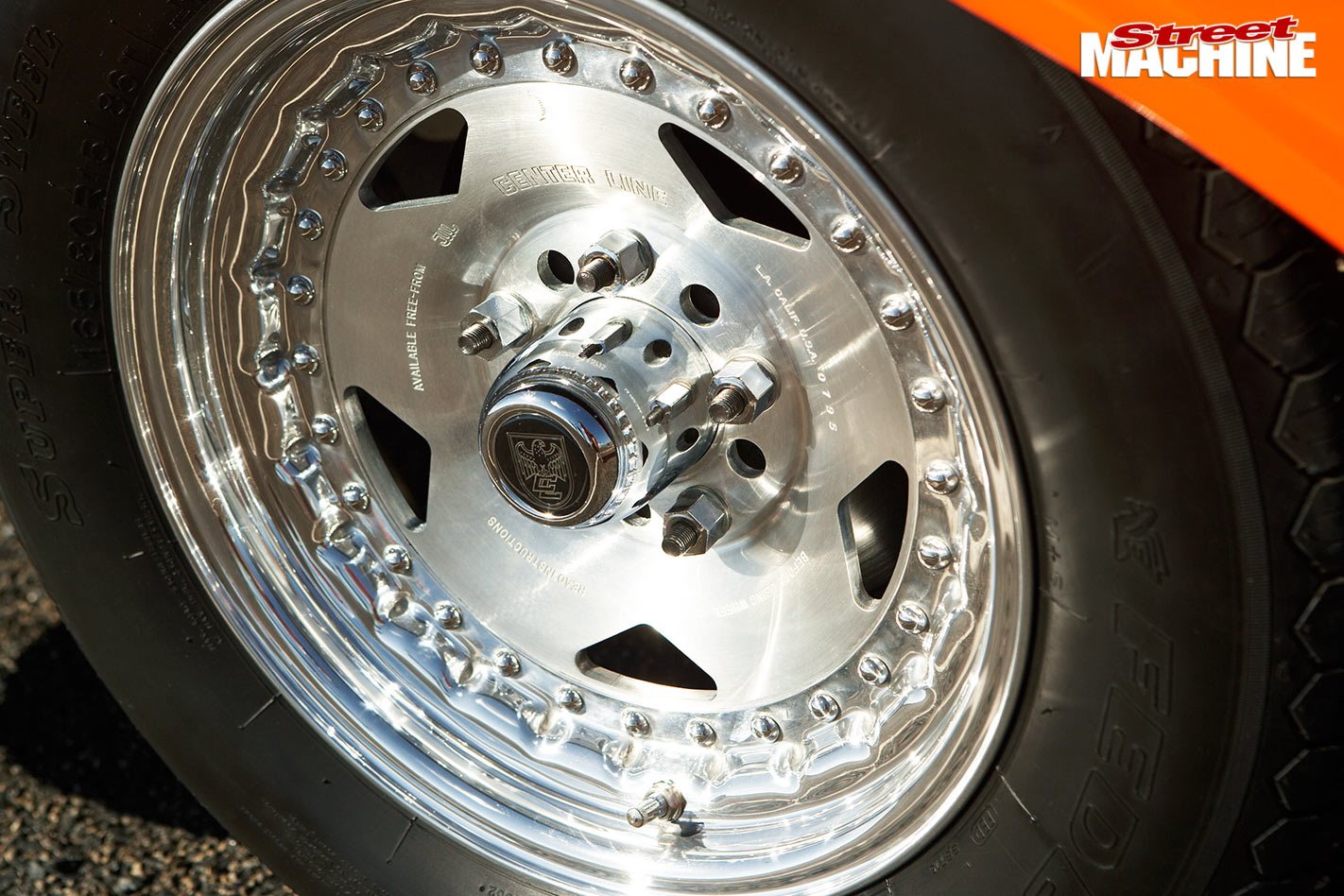 “It likes 100 octane fuel but I have to make do with premium on the street,” Derek says.

Finishing it off is a set of Pacemaker headers, while three-inch Redback mufflers do their best to silence the 500 or so horses the motor makes.

Getting all that grunt to the ground has been a little bit of a challenge. “We’ve had three goes at getting the transmission to hold the power and weight of the car. In the end we just changed the whole lot as we thought there must’ve been a crack somewhere.” 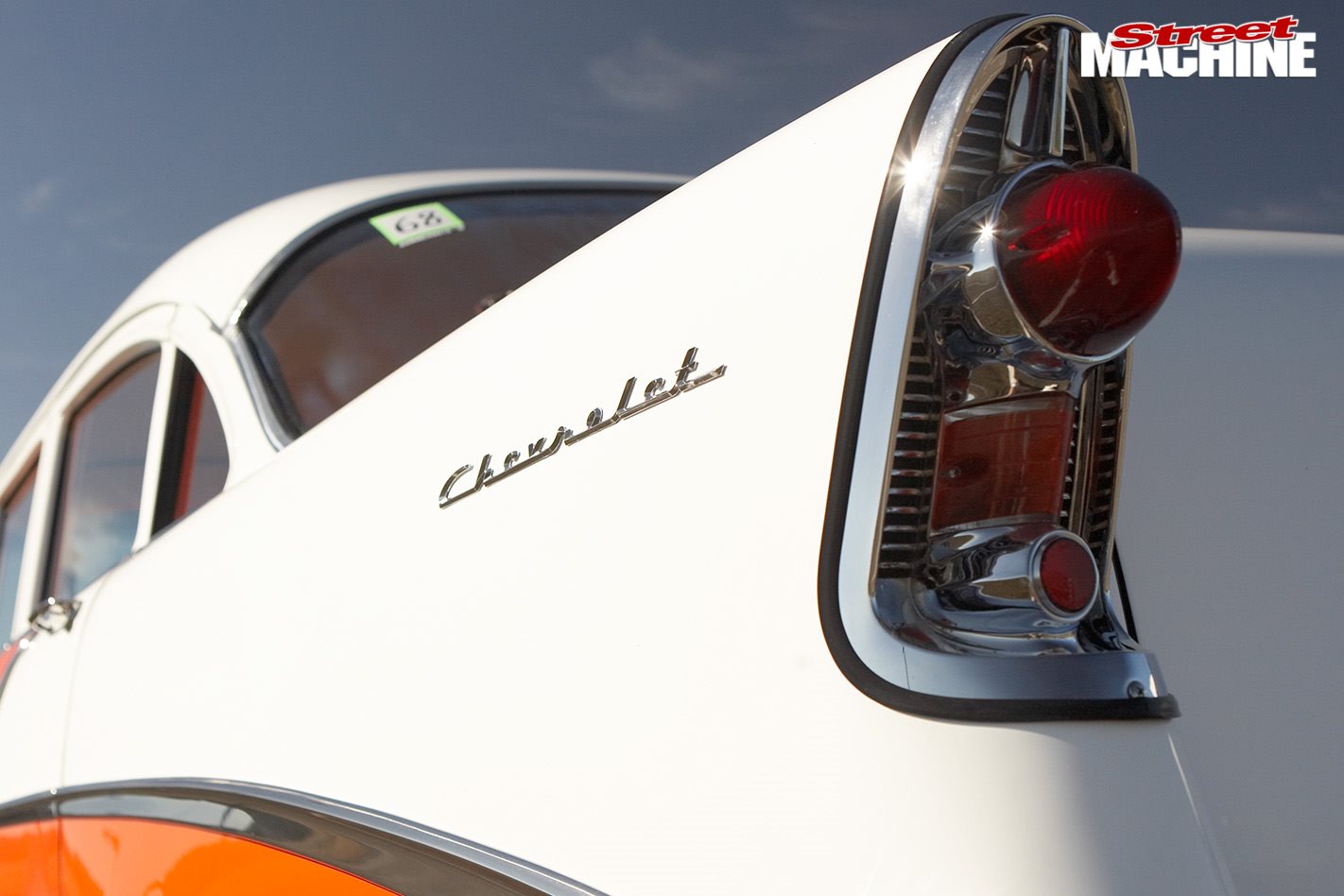 Ron Sherlock put together a fully manualised TH400 with a shift kit and 2500rpm stall converter. Way out back is an LSD-equipped nine-inch that was shortened by Prehn Engineering. To make sure it hangs together, it’s been fitted with billet 31-spline axles from Sydney Competition Warehouse.

For that killer slammed look at the show ’n’ shine without sacrificing driveability, Derek has fitted an Air Ride system from Slam Specialties. The airbags bolt to an HQ Holden front clip that was put in by Stephen Lloyd, while helping the rear end get a grip is a set of Cal Tracs. 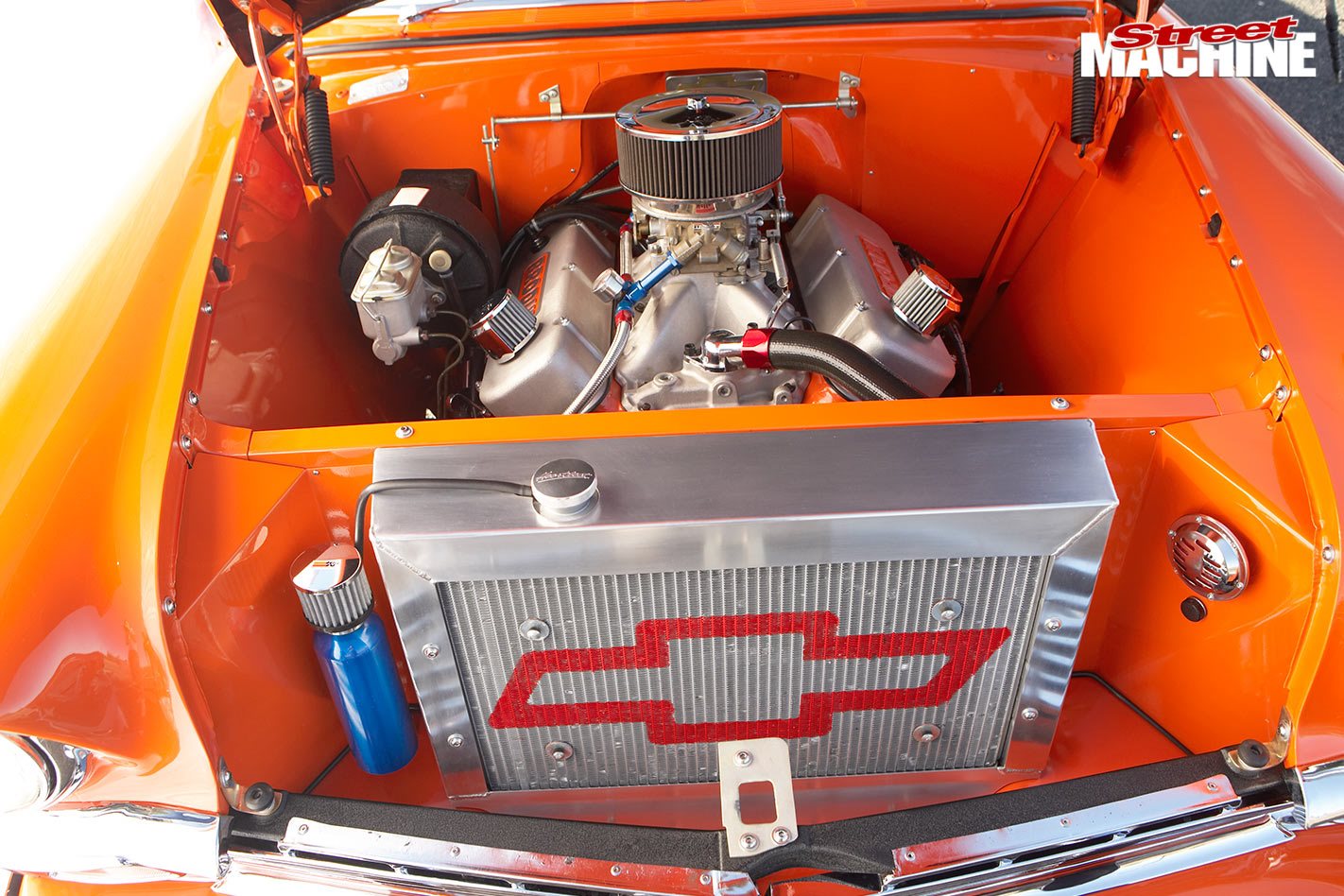 Due to its former life as a drag car, the Chevy had lost its inner guards. For street use that wasn’t practical, so Derek had new ones made from alloy sheet for a tidy engine bay

Even so, most of the grip is achieved through the rather large footprint that the 18.5-inch Mickey Thompsons leave on the road. They’re wrapped around a set of 15x15 rims. Yep, 15in-wide Convo Pros! Up front are 15x4s wearing a set of 5in-wide Federal tyres.

As a race car the Chevy was painted your basic go-faster black but Derek wanted to stand out a little in the crowd, so it copped a super-bright coat of Spies Hecker Tango as the lower part of the two-tone paint scheme. For maximum contrast, the rest of the car was painted in straight white tinter. 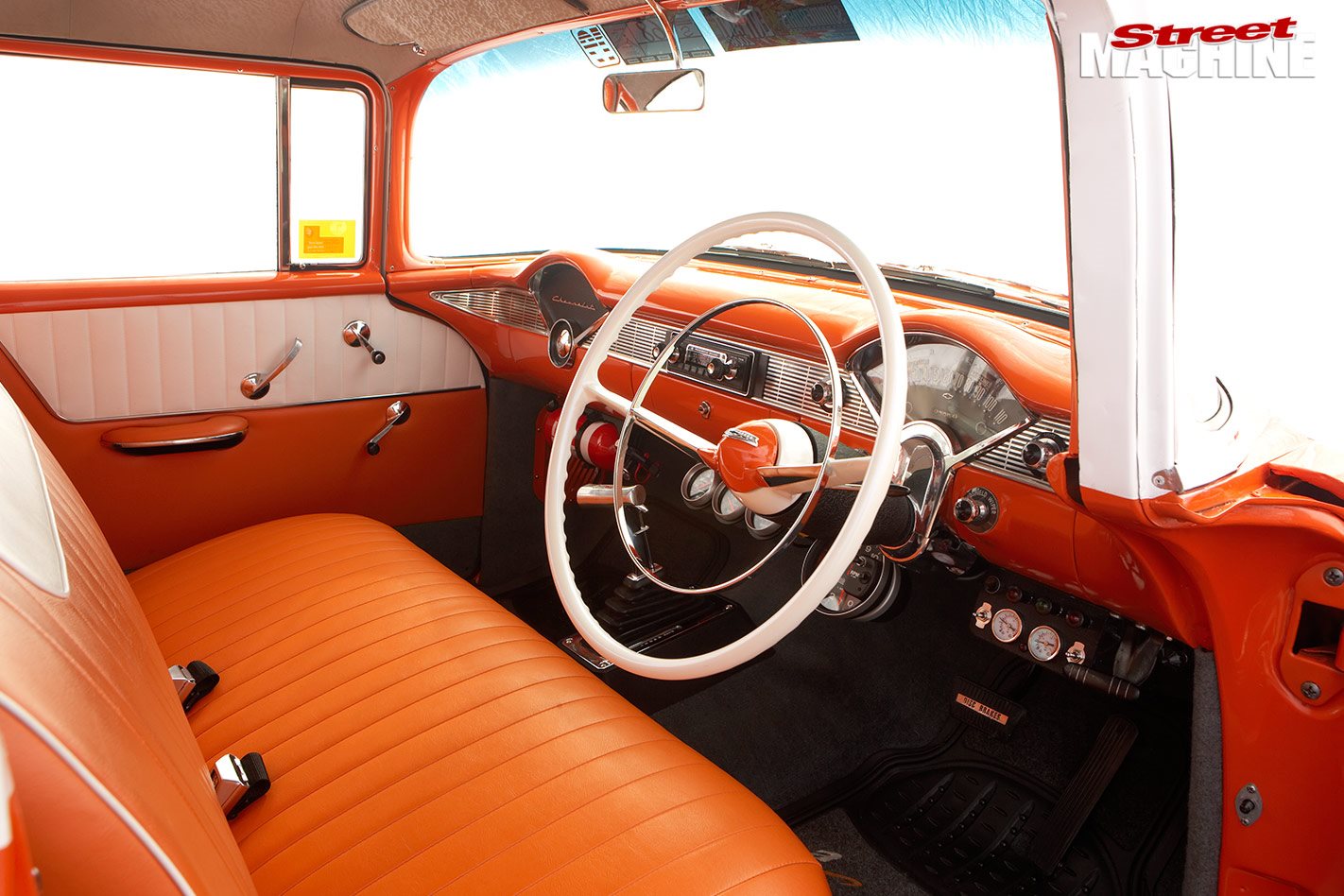 The body is pretty much how it left the factory with all of its bright-work intact. If you’re wondering why it looks like it’s got ’55 Chevy trim, that’s because it’s the mid-range 210 model.

Inside is much as nature intended too, the stock dash complemented by a bunch of Auto Meter gauges. Derek chose to keep the stock steering wheel, though the original style trim is in a much a brighter combination than the factory offered.

Back in its heyday Ron had the Chev running 11.65@130mph; the new and improved version in street trim isn’t far behind. At a slightly slippery Heathcote, Derek reeled off an 11.8@120mph — not bad, considering he drove it there and he was on street rubber! 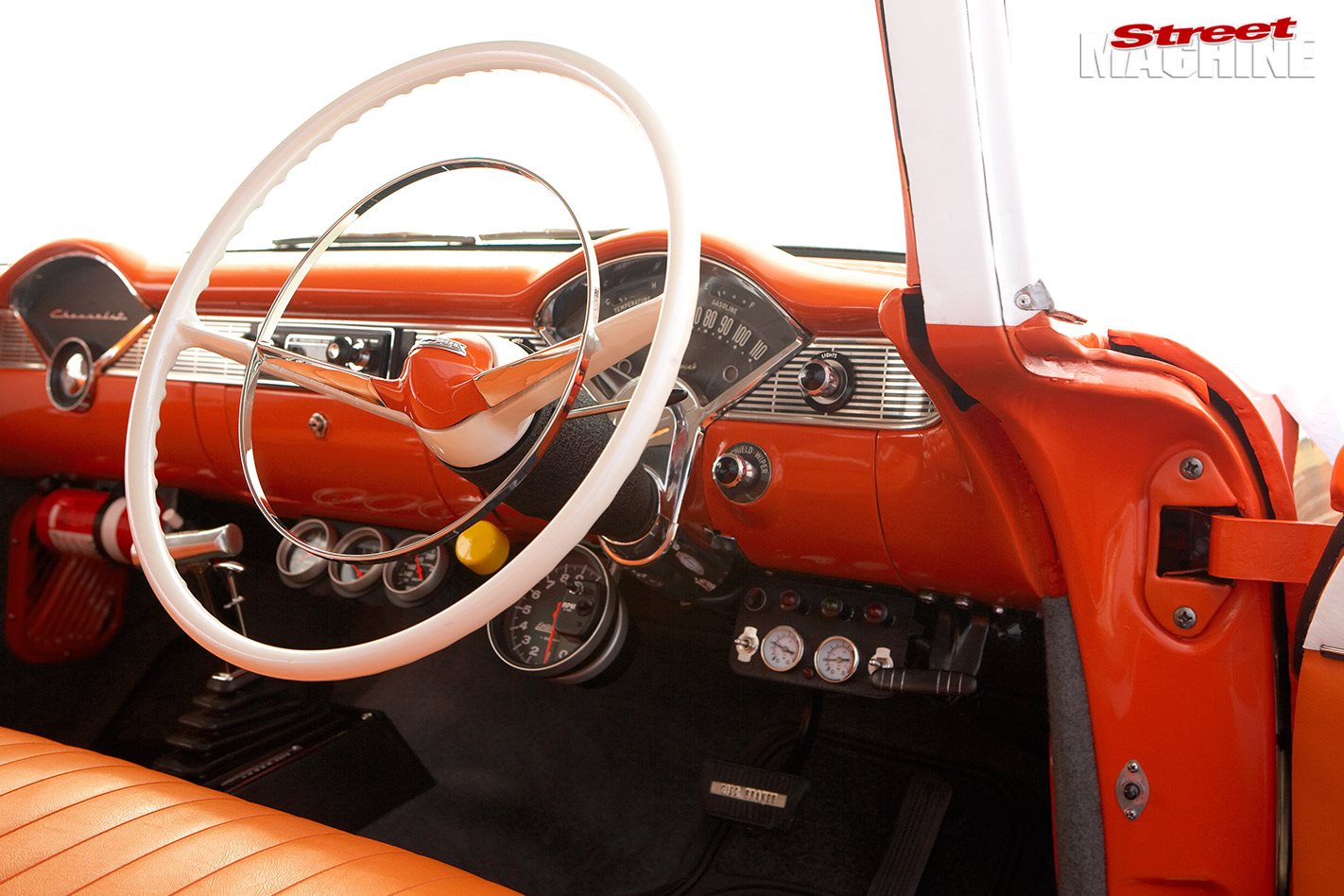 “I’d really like to chuck a set of slicks on it and see what it’ll do,” Derek says. Who knows, it might even go quicker than before!

When we spotted the car on the grass at Summernats, we were surprised to hear that Derek had driven up from Tasmania: “The car ran up and back with no major problems. I got a little bit of attention from the Victorian Police and the Canberra RTA but there were no real problems. I just think they wanted a closer look.”

In the early 50s, Chevrolet identified economy and mid-range models by numbers. Lowest-spec was the 150, named by shortening the production series number, 1500, by one digit. The 150 replaced the Styleline in 1953; in 1958 it was replaced by the Delray.

The 150 was aimed at fleets — it was popular with cops, governments and of course hot rodders, who figured it was the lightest and potentially quickest.

The 210 was the mid-range model, popular with those who couldn’t stretch to the fully loaded Bel Air. 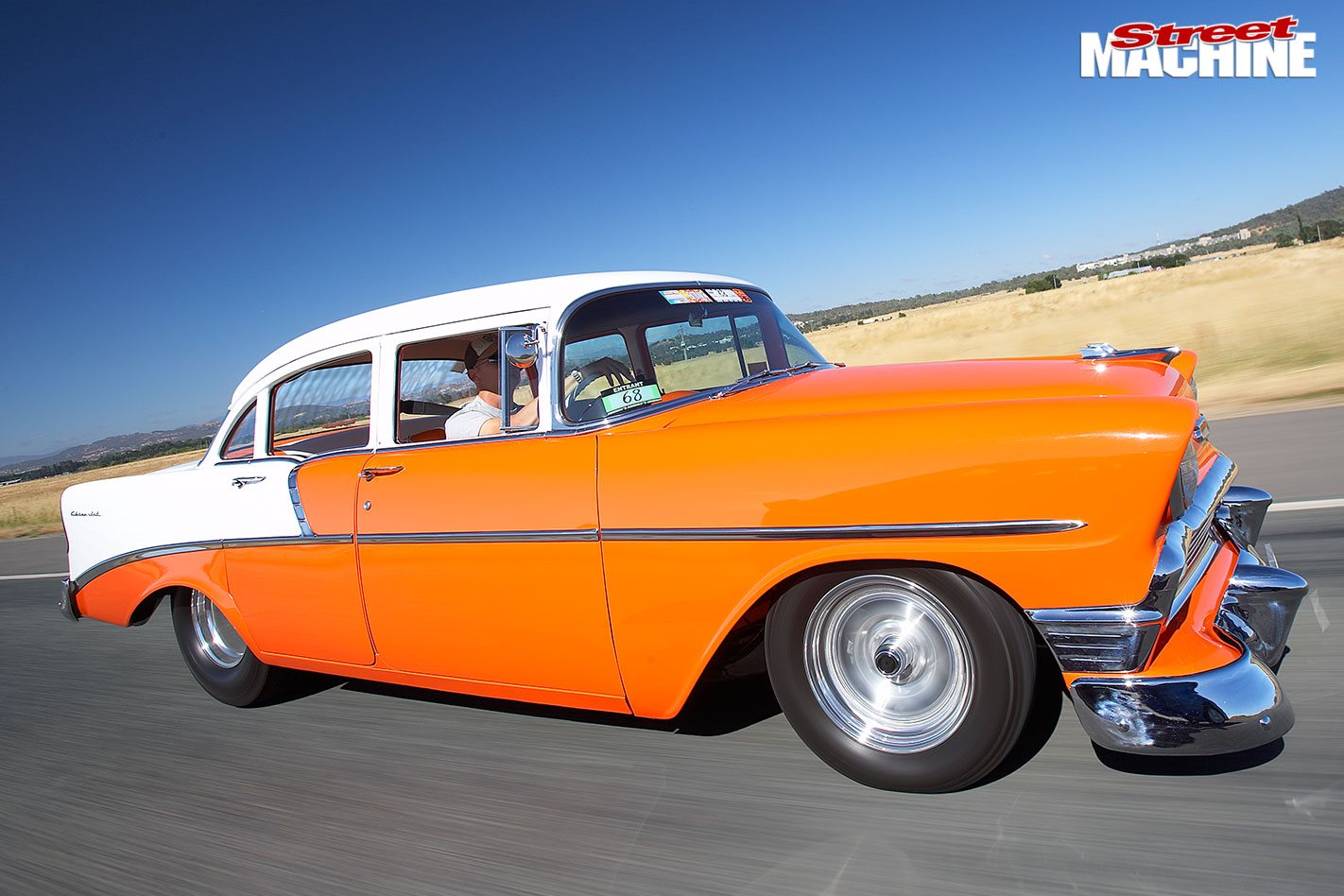 The production series number for the Bel Air was 2400 so you could call that a 240 Chevrolet!

In 1956, the 150 had a simple stainless spear on the front fender, while the 210 extended the spear the full length of the car as it swept down towards the bumper. The Bel Air, being the top of the range, naturally came with the fanciest trim.

The stainless spear of the 210 splits into two pieces on the rear door, making one of the nicest two-tone treatments of any 50s car. 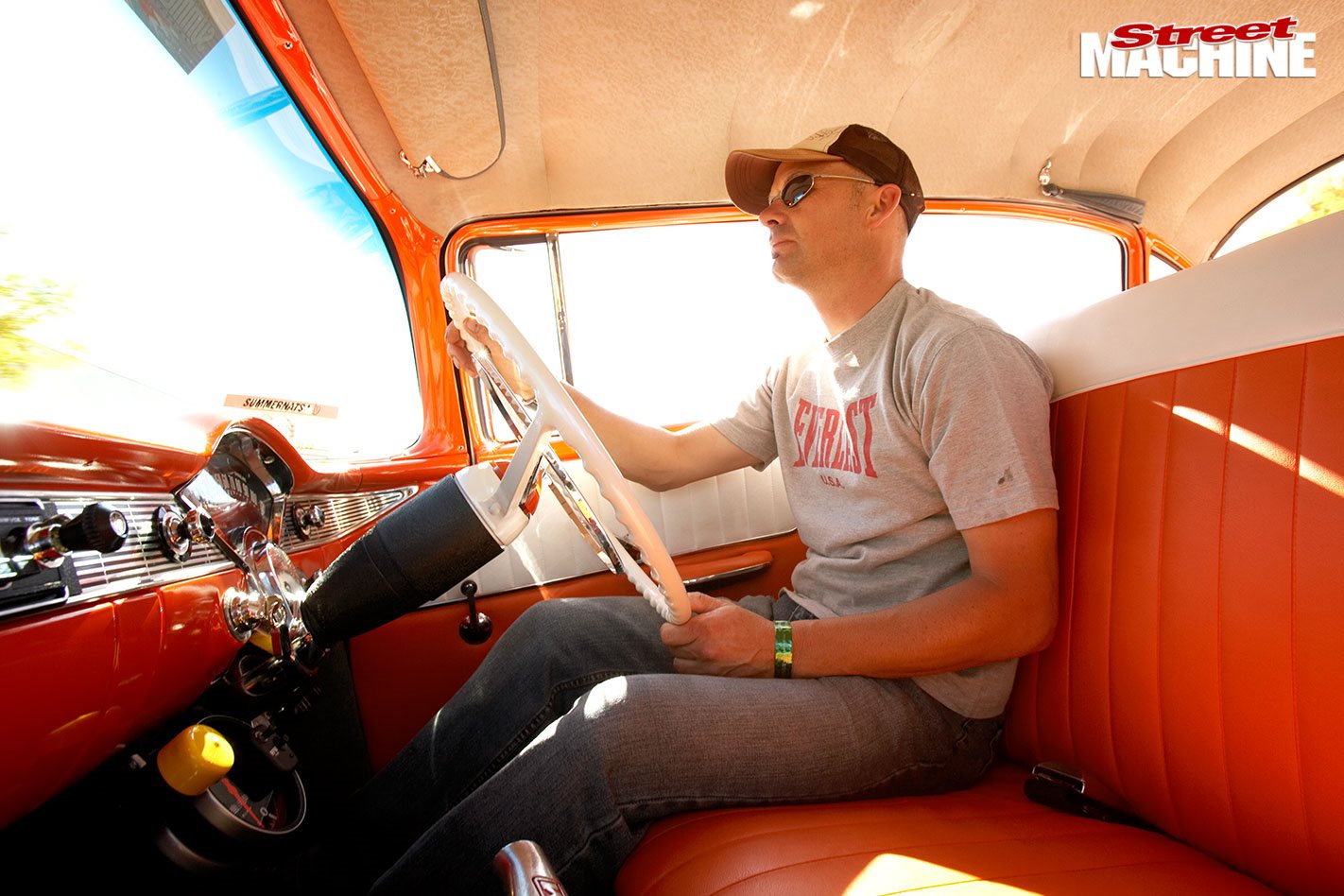