ANDREW Damien’s tough HQ Monaro looks so positively bad-arse in its black duco it’s difficult to imagine it any other colour. So difficult in fact that it may come as a shock to learn that it used to be white. Powered by a blown, carby-fed, pump-gas small-block and rocking a set of minitubs, it was a fairly impressive little street car – indeed, we featured it in the December 2007 SM. But all the cool kids were running full tubs, four-links, 20s and injection, and Andrew was pretty keen to keep up with the Joneses. 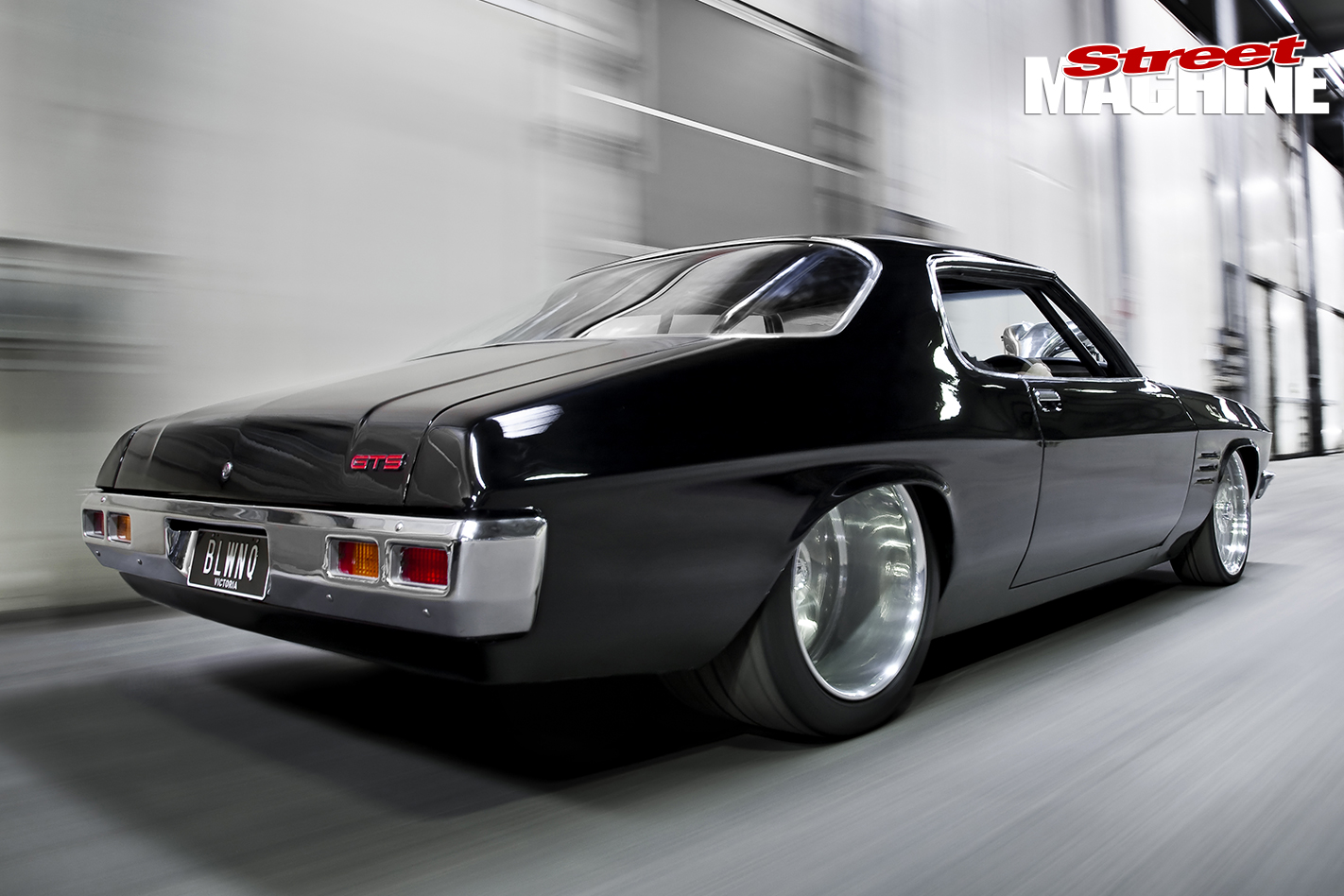 Plenty of hours have been invested in achieving the stunning result

“It was a nice car, but everyone was going bigger, fatter, lower and louder, so it had to be done,” he beamed. By “it” he means the balls-out rebuild that took the car from tough streeter to a mental, methanol-injected, 1000+ horsepower, full-chassis monster, so supremely menacing in its demeanour that when you first see it, you’re powerless to do anything but stare and grin.

A tubbed, black-on-black Monaro slammed into the weeds with a hulking great big blower and injector hat will work every time, but in this case the colour wasn’t a foregone conclusion. “Everyone would come around and ask what colour it was going to be and we’d drive around car yards trying to figure it out, but I wanted something that wouldn’t date,” explained Andrew. “When Aeroflow released their line of black fittings that’s what made my mind up – I had to go with black fittings and black paint.” 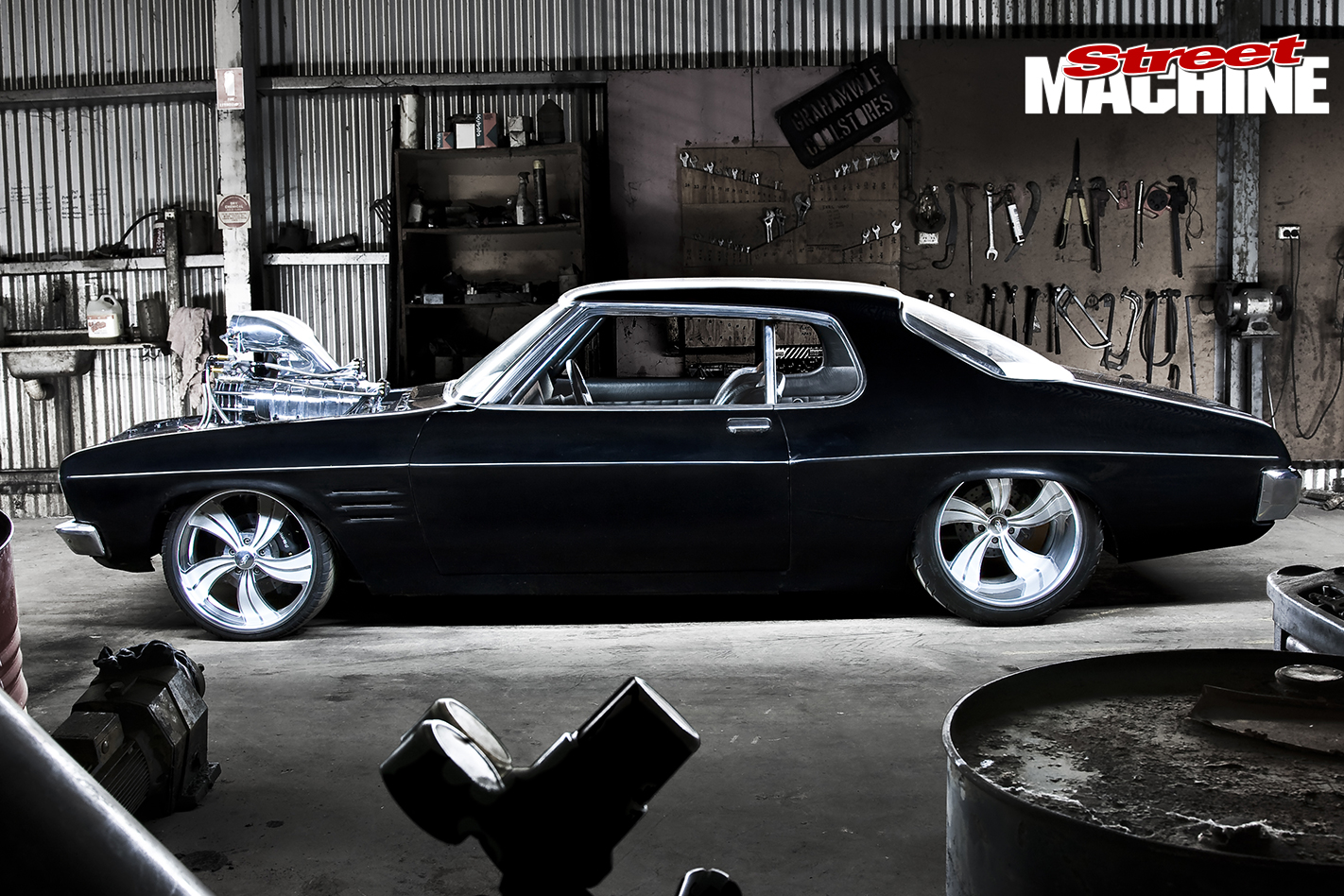 Plan A was just to tub the car and throw some bigger wheels under it, so Andrew shouted himself a set of Showwheels billets and a McDonald Bros rear clip and sheetmetal nine-inch housing, then cut the rear floor out. Soon thereafter he realised that he’d have to lift the tunnel to get it to sit how he wanted, so he hacked that out too. To raise the gearbox he then had to raise the engine, and before you knew it there was nothing left.

The whole car was built around the rear wheels, and it kept getting more and more serious as Andrew chased his tail through to the front of the car. Somewhere along the line it ended up with a full chassis from front to rear with massive tubs, a custom boot floor and tunnel and a fully fabricated flat firewall. “I guess I got carried away, but because I was doing it myself I just kept going. If I was paying someone else to do it I would have said stop a long time ago!” he said. 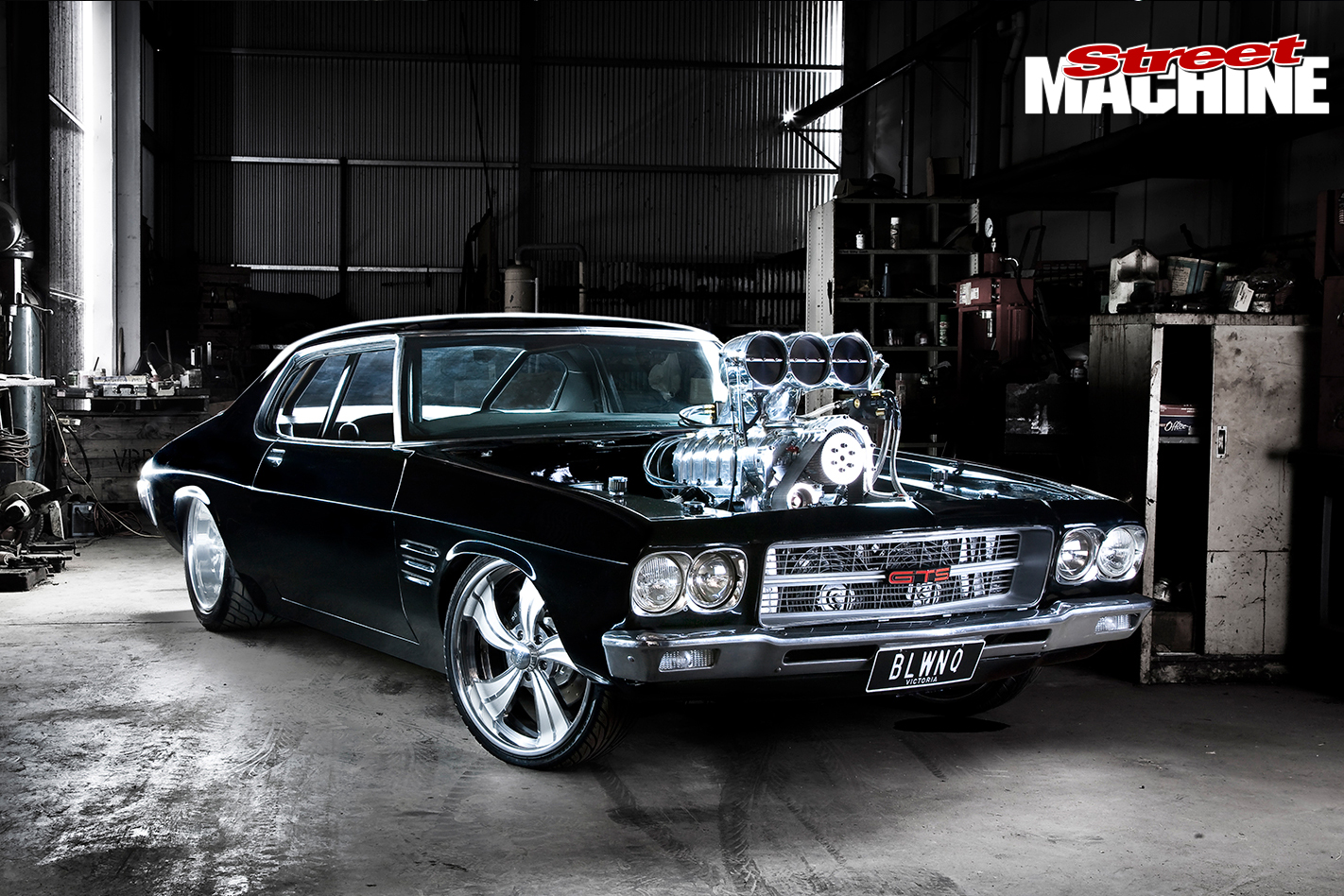 Andrew’s an orchardist by trade, and that’s probably where a lot of the DIY mentality stems from. “If something breaks down on the farm you just fix it – you’ve got to be pretty handy. All my welding and engineering skills are self-taught, and for months I just sat there with a four-inch grinder and a MIG welder and that’s all I’d do; weld and grind, weld and grind. All my socks have holes in them, but I enjoyed it – that was the fun part!”

It wasn’t just the underside of the car that underwent surgery, either. The front guards, nose cone and radiator support panel became one, and the bonnet catch and hinges are a thing of the past. The windscreen wipers, door locks, rear indicator repeaters, aerial and both external mirrors were also deleted, replaced instead by silky smooth sheetmetal. Beautifully symmetrical custom built fuel header tanks with integrated oil catch cans flank the engine, powder-coated black to blend in with the car. 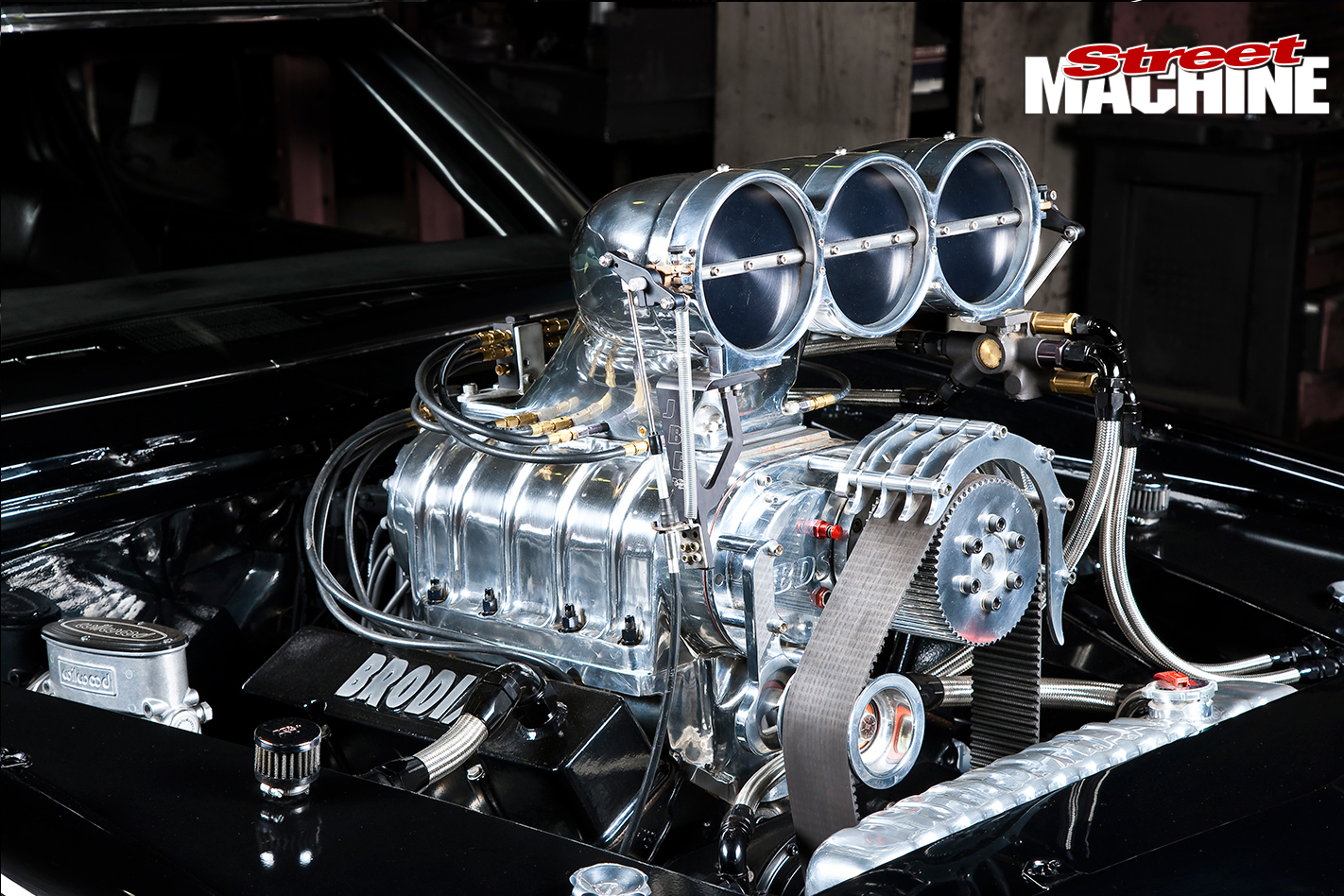 The wild donk lives in a super-tidy engine bay, with a flat firewall, smoothed plenum, deleted bonnet hinges and a thorough deseaming

Mechanically it’s a pretty wild affair, with a highly strung 410-cube small-block soundly built with quality components like a Callies crank, Oliver rods, CP pistons, Brodix heads and a Bullet cam by Andrew and his mate Danny Selva. Visually though it’s all about the polished 8/71 BDS pump and Enderle Big and Ugly injector hat. “It made 900hp with carbies, and they say that methanol’s generally worth two or three hundred, so I guess it’s probably making 1100 or 1200hp as is,” said Andrew. 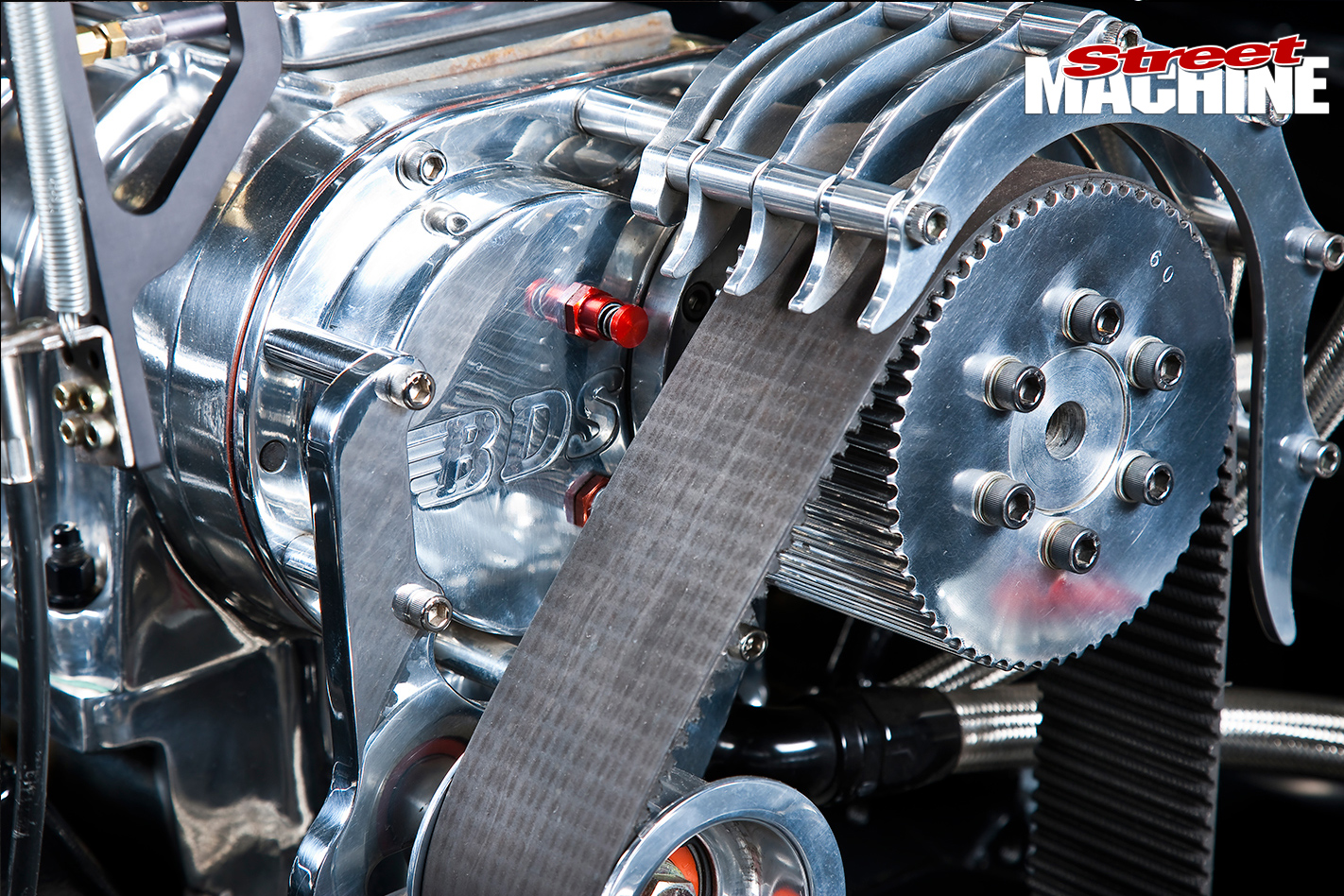 One thing’s for sure – the engine sounded absolutely nuts when it ran on the skidpan at Springnats in 2012. But that’s not the first time it’d been put through its paces. “We actually put it in Donny’s Capri while the HQ was being built, just for a laugh. We took it to Heathcote and Donny kept telling me to take it easy, but as our mate Pete pointed out, I don’t often take it easy! It ran 9.80 @ 151mph on Mickey Thompson Sportsmans – it just baked them. The Powerglide behind the engine at the time came from the wreckers and cost $300, so I think the only thing that saved it was that the tyres just got smashed off the car and it was never under any real load.” 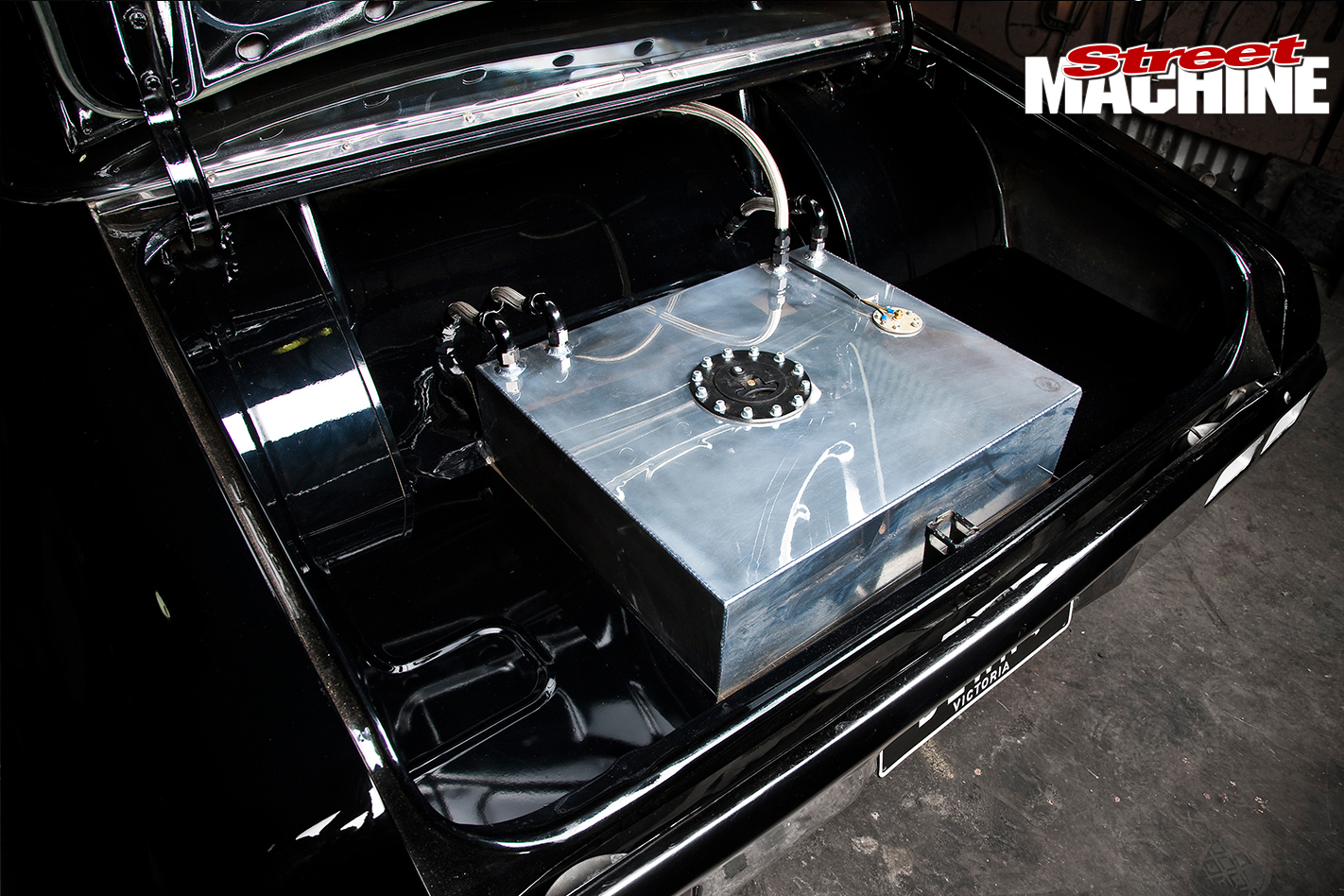 These days the engine’s backed by a much more appropriate transmission – a manualised Turbo 400 with a 4500rpm converter feeding a 3.5:1-geared sheetmetal 9in with a full spool and 35-spline Moser axles. Wilwood stoppers reside at all four corner while QA1 coilovers smooth out the bumps, with 2½-inch drop spindles helping to achieve that delicious stance.

“I went to a lot of trouble to make sure the car sat right. Wheels, stance and paint are what it’s all about,” said Andrew. “I sat the back wheels in under the guards and for three days every time I walked past it I’d move them slightly until I was happy. Because of how low the car sits and how much dish those back wheels have, you don’t realise how big they are. They’re monsters.” Specifically, they’re Showwheels Twisted Vistas measuring 20x15 inches, shod in Mickey Thompson 29/18-20 radials. The fronts are considerably narrower at 20x7in, wearing far more modestly proportioned Goodyear 225/25-20 hoops. 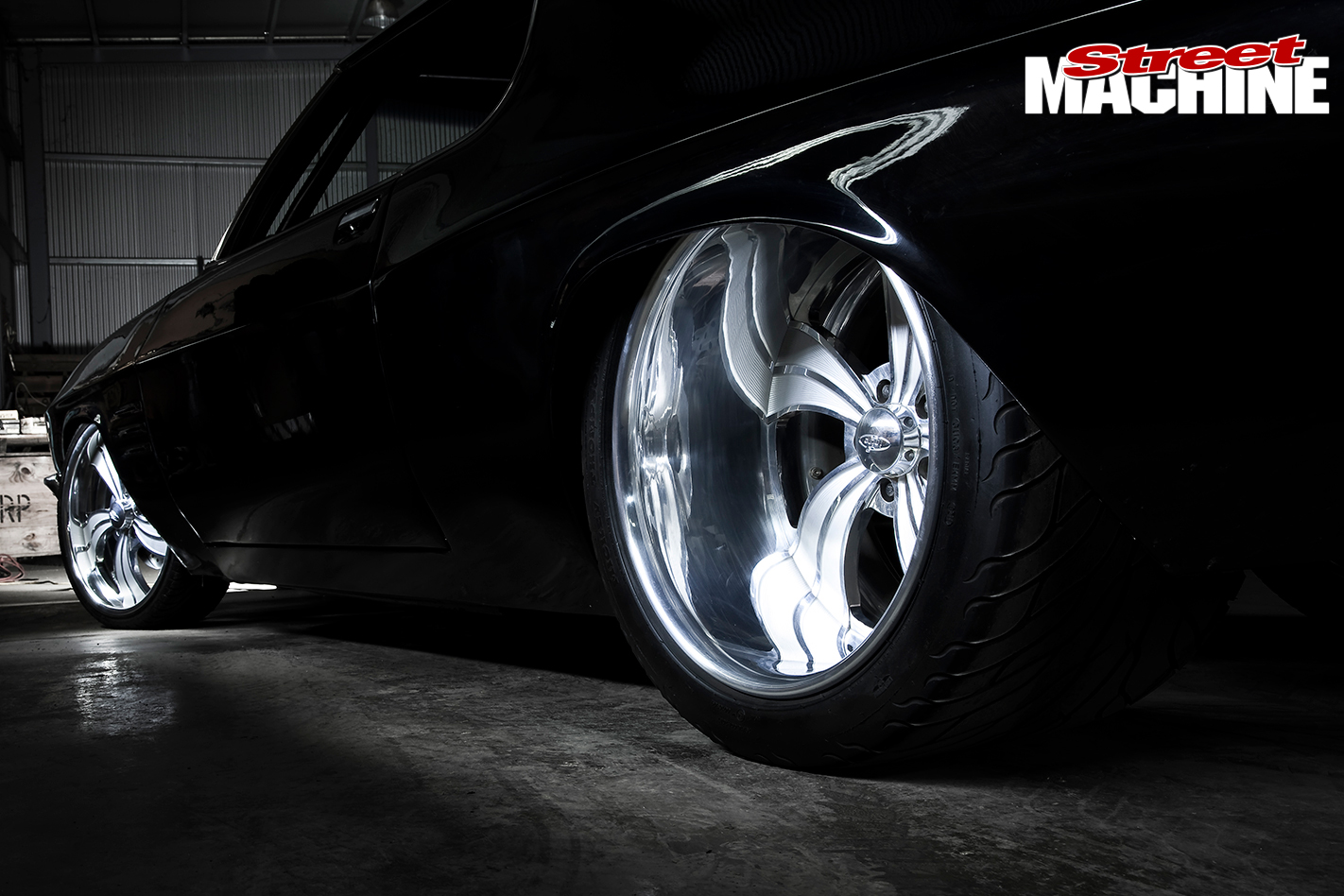 Stepping inside, things are every bit as tough, purposeful and black. “I went with all black because I wanted it to be practical. At shows everyone just piles in and off we go. Later on I might go dark red or burgundy, but black is racier and it was built more to race and skid than show.” Features such as the brushed aluminium dash fascia, Auto Meter gauges, warning lights, B&M cog swapper and eight-point ’cage echo the function-before-form sentiment, and the cabin has a real race-ready feel. 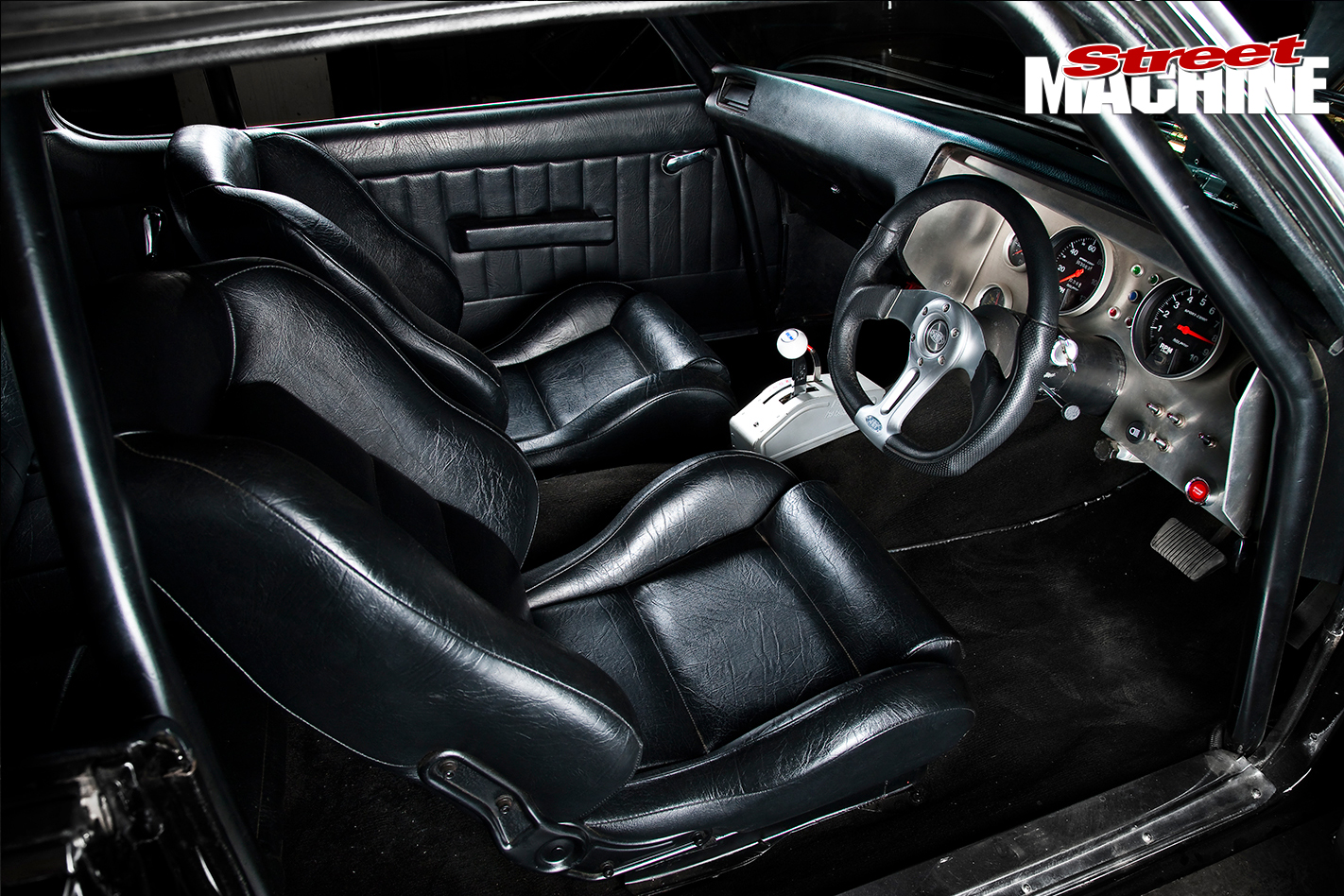 Clean, tough and practical, the cabin features all the essentials for competition use

Just as well, because Andrew intends racing it. “I’m definitely keen to take it to the drags after I’ve done a few more shows. I didn’t go overboard and spend shitloads on things like paint because that was always the plan – I want to use the car and I knew it’d get knocked around. I didn’t want to have to worry about it.” 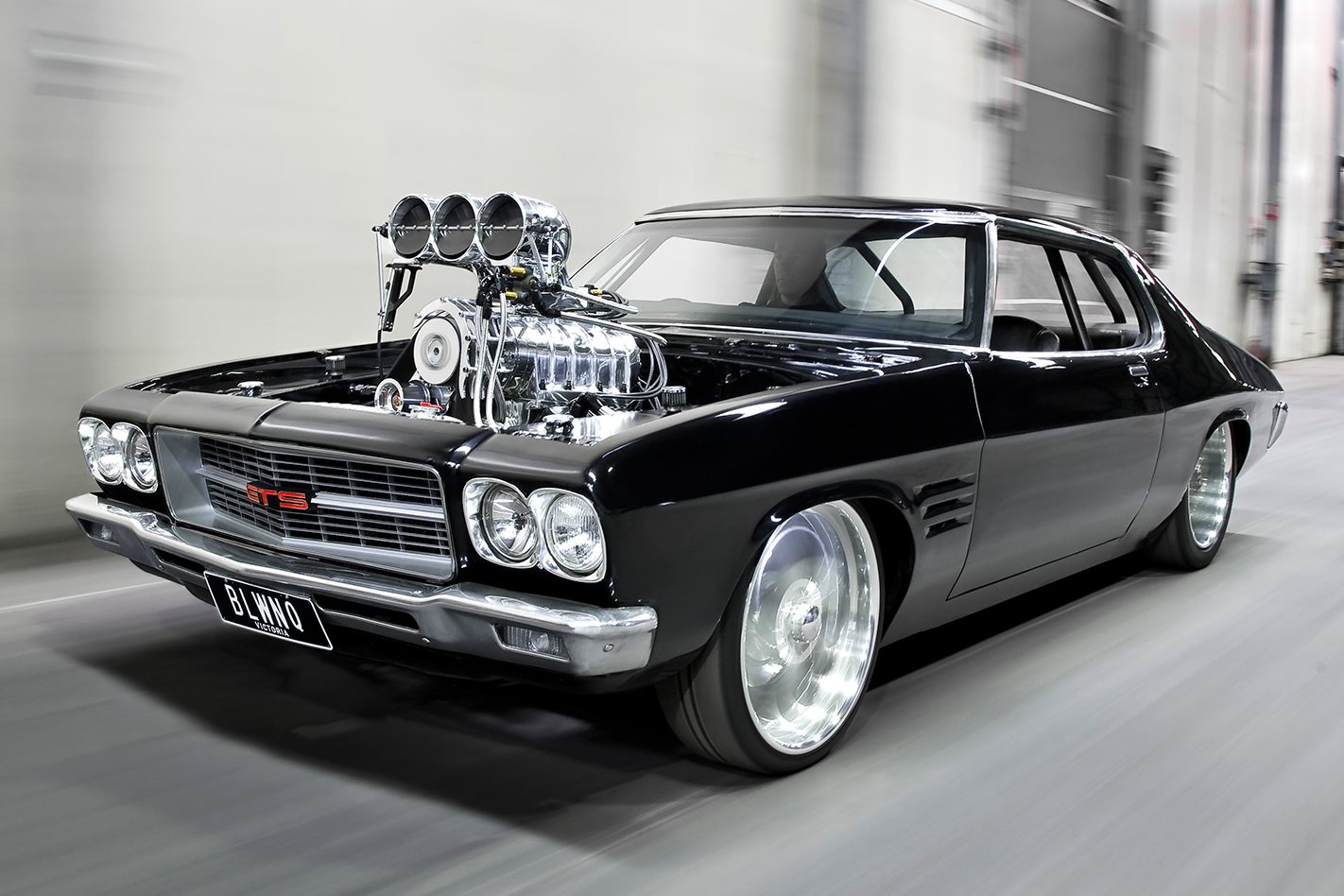 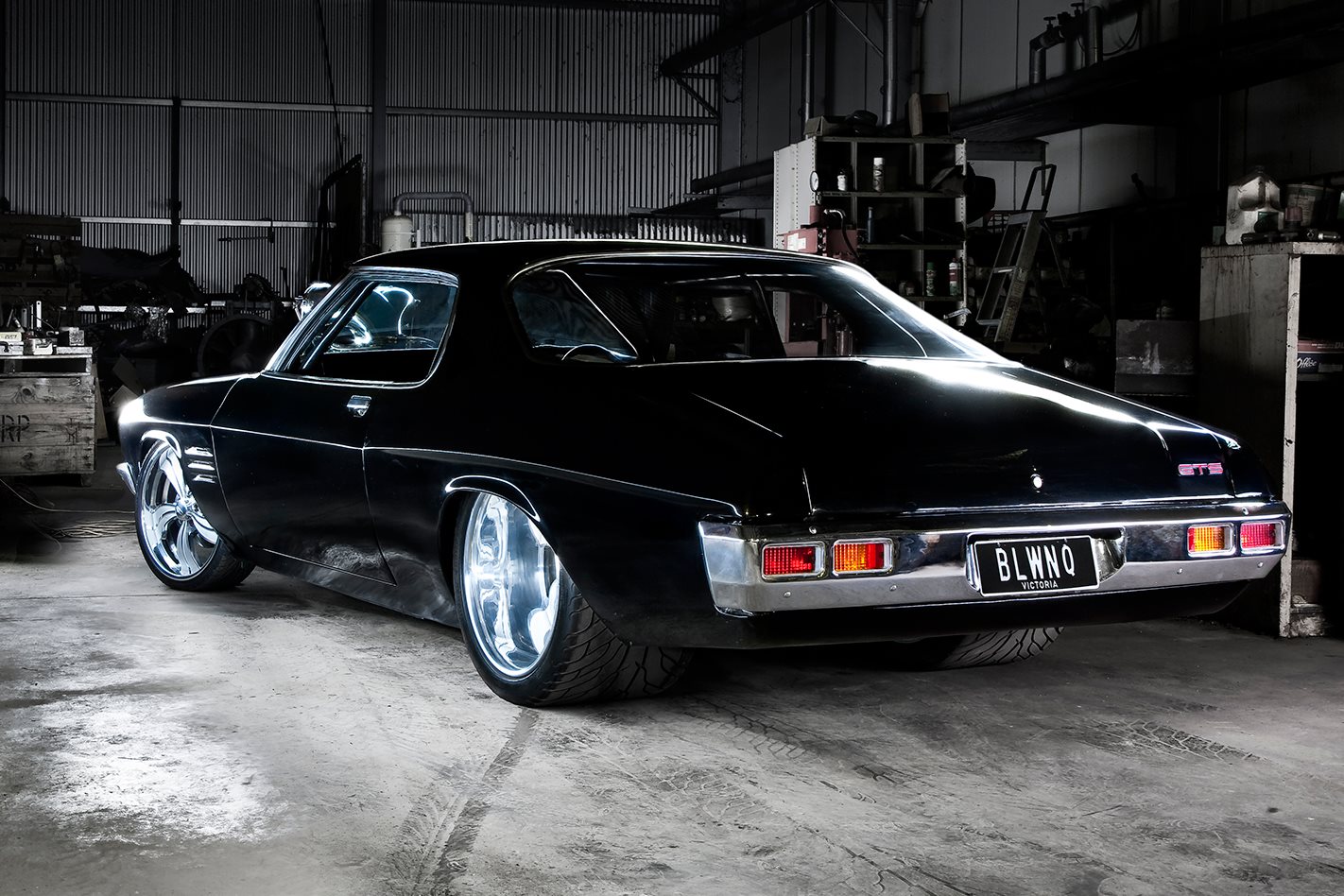 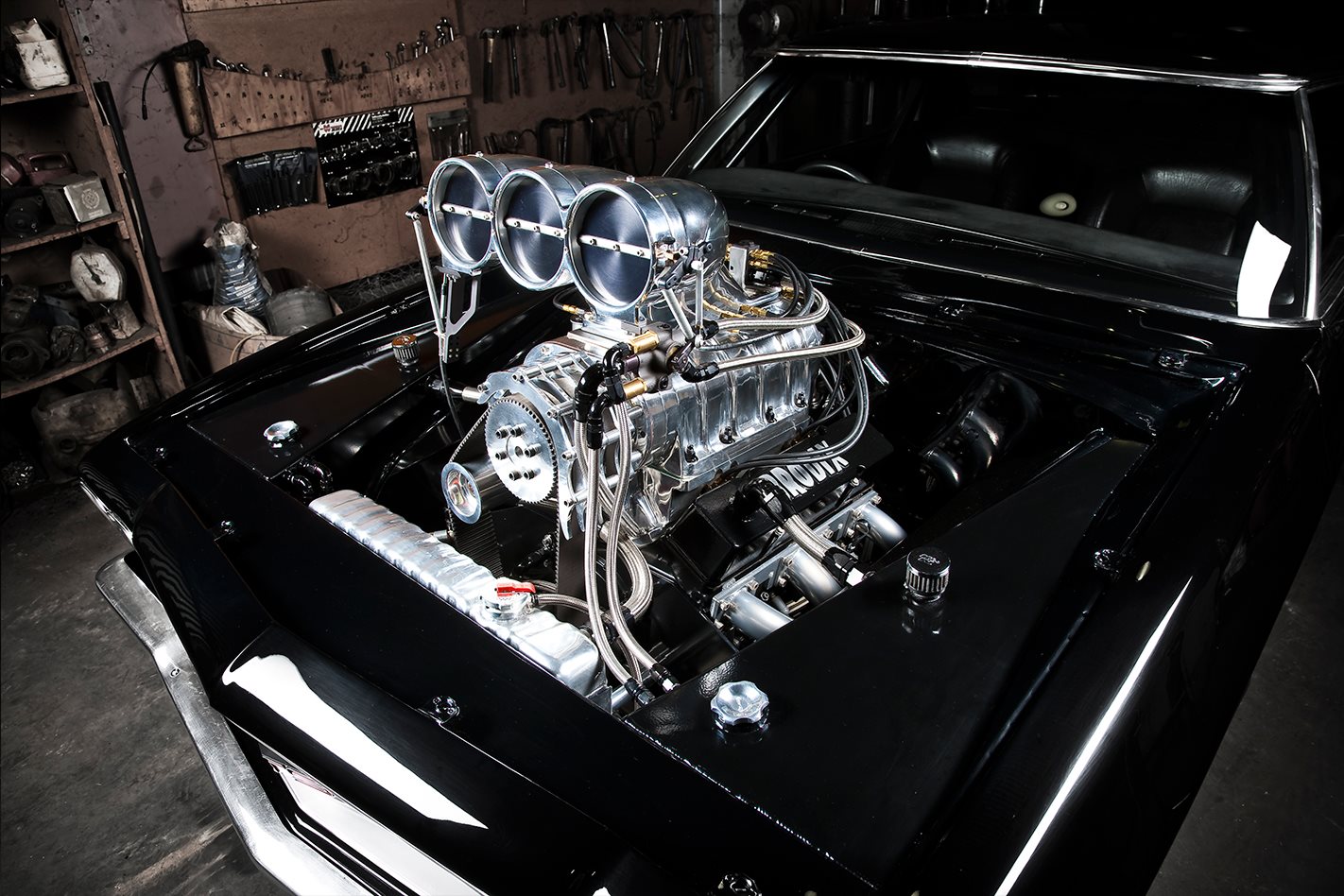 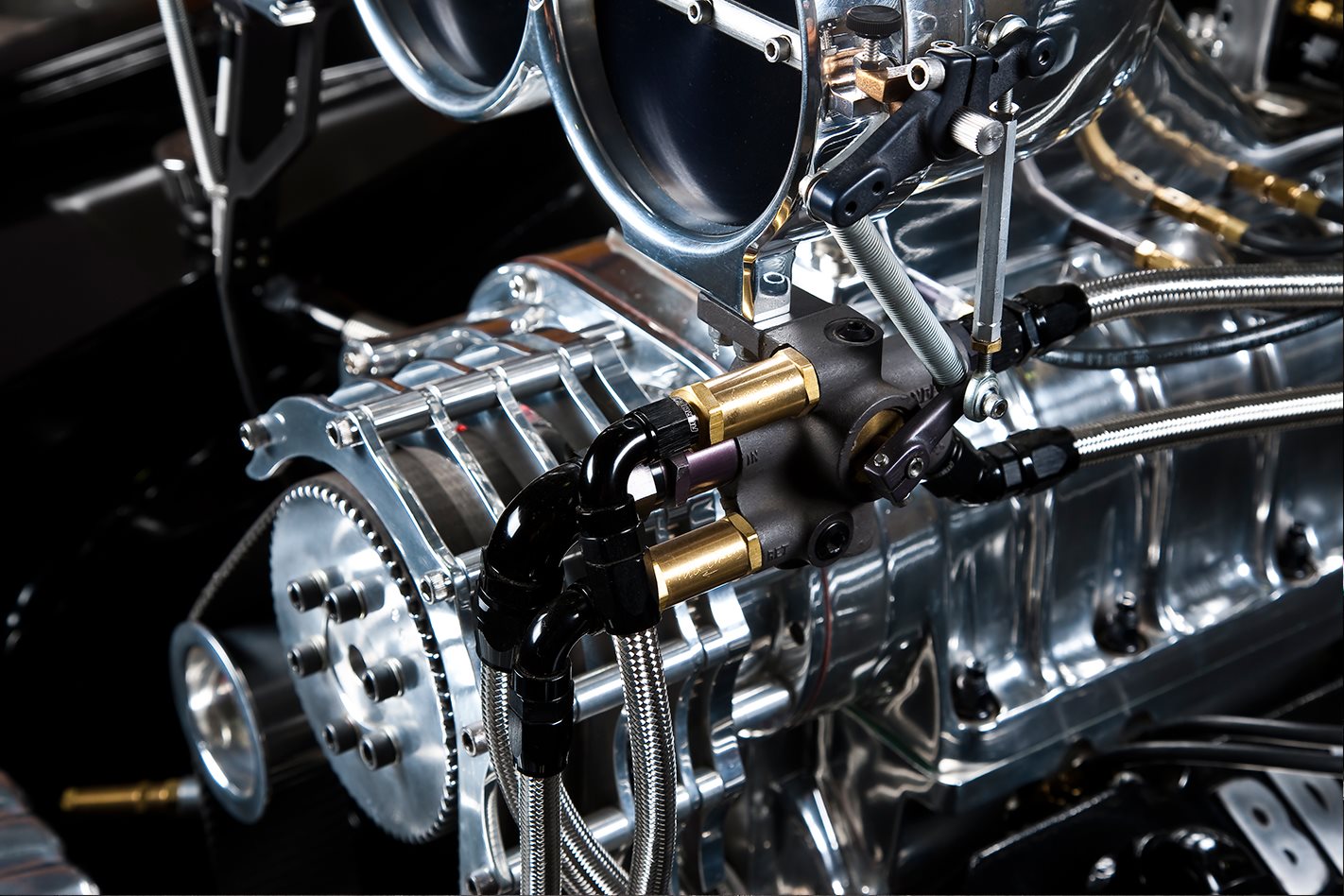 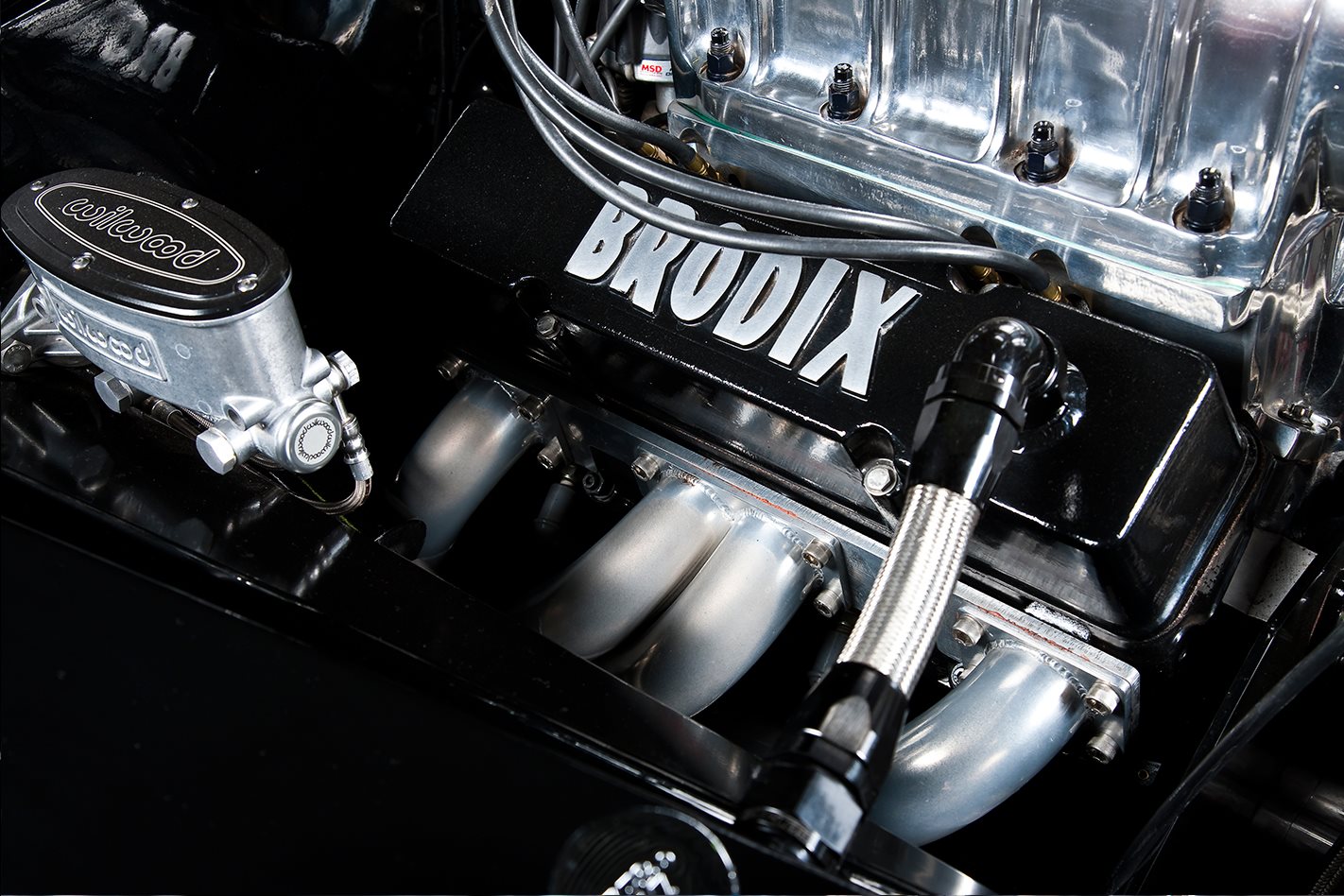 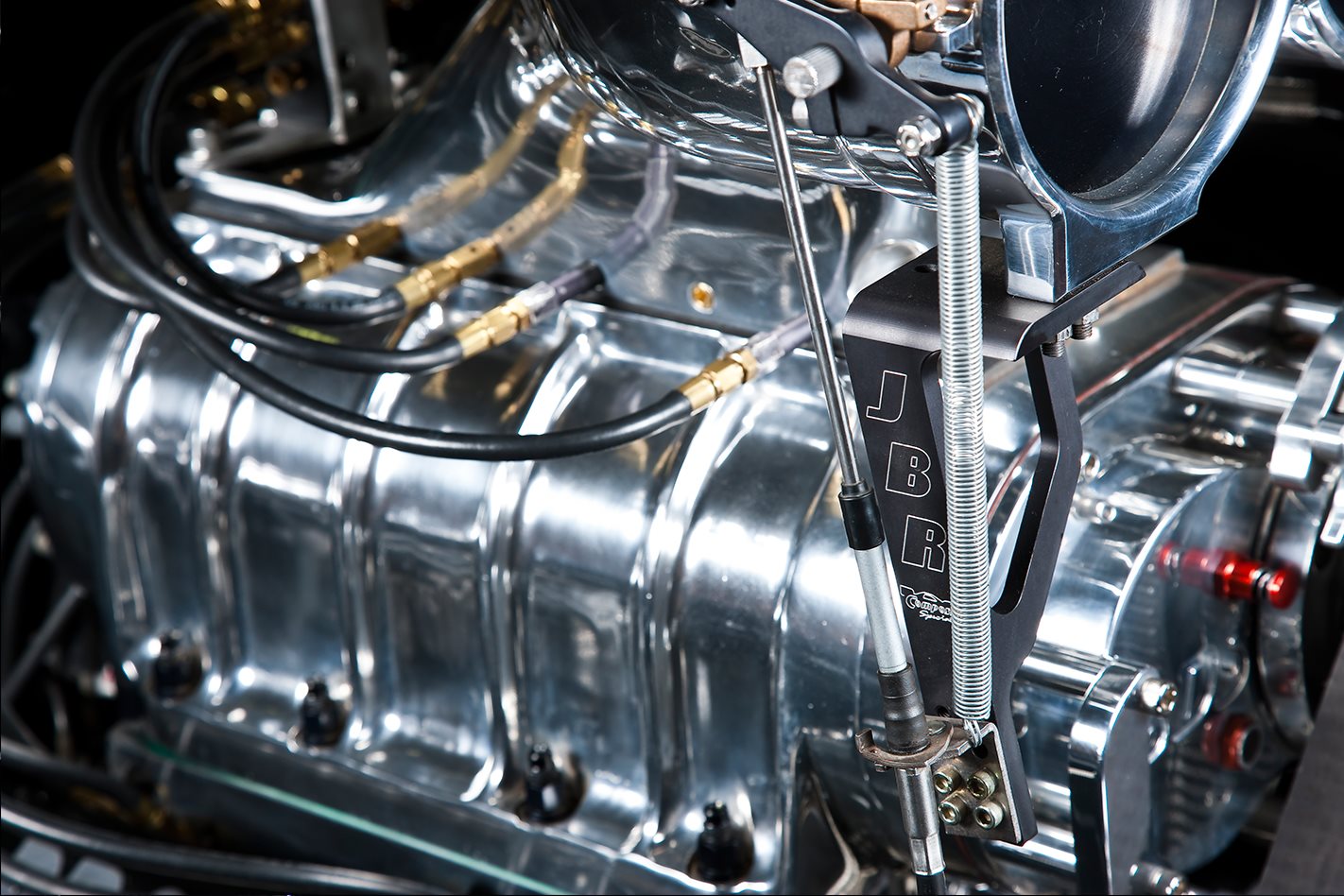 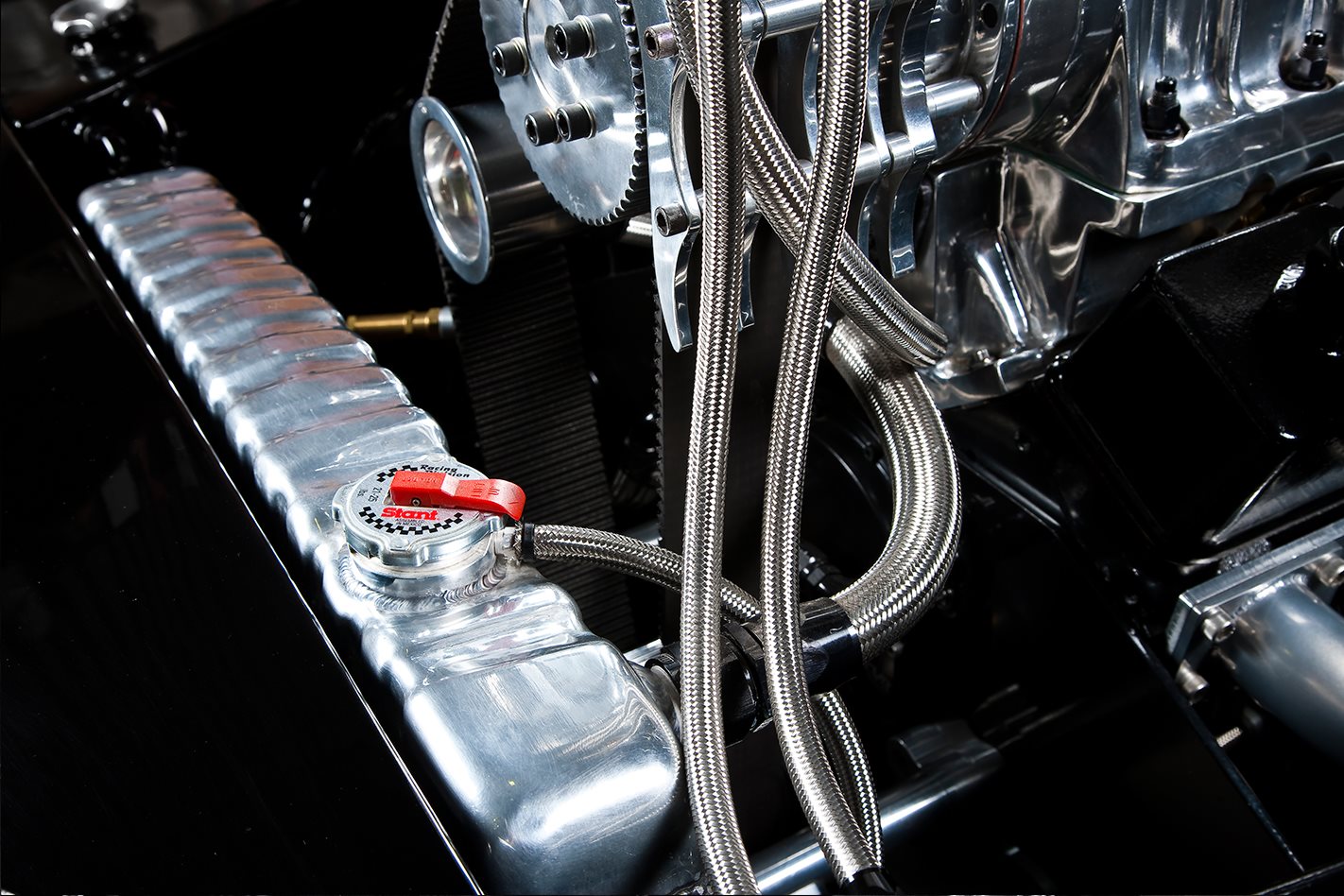 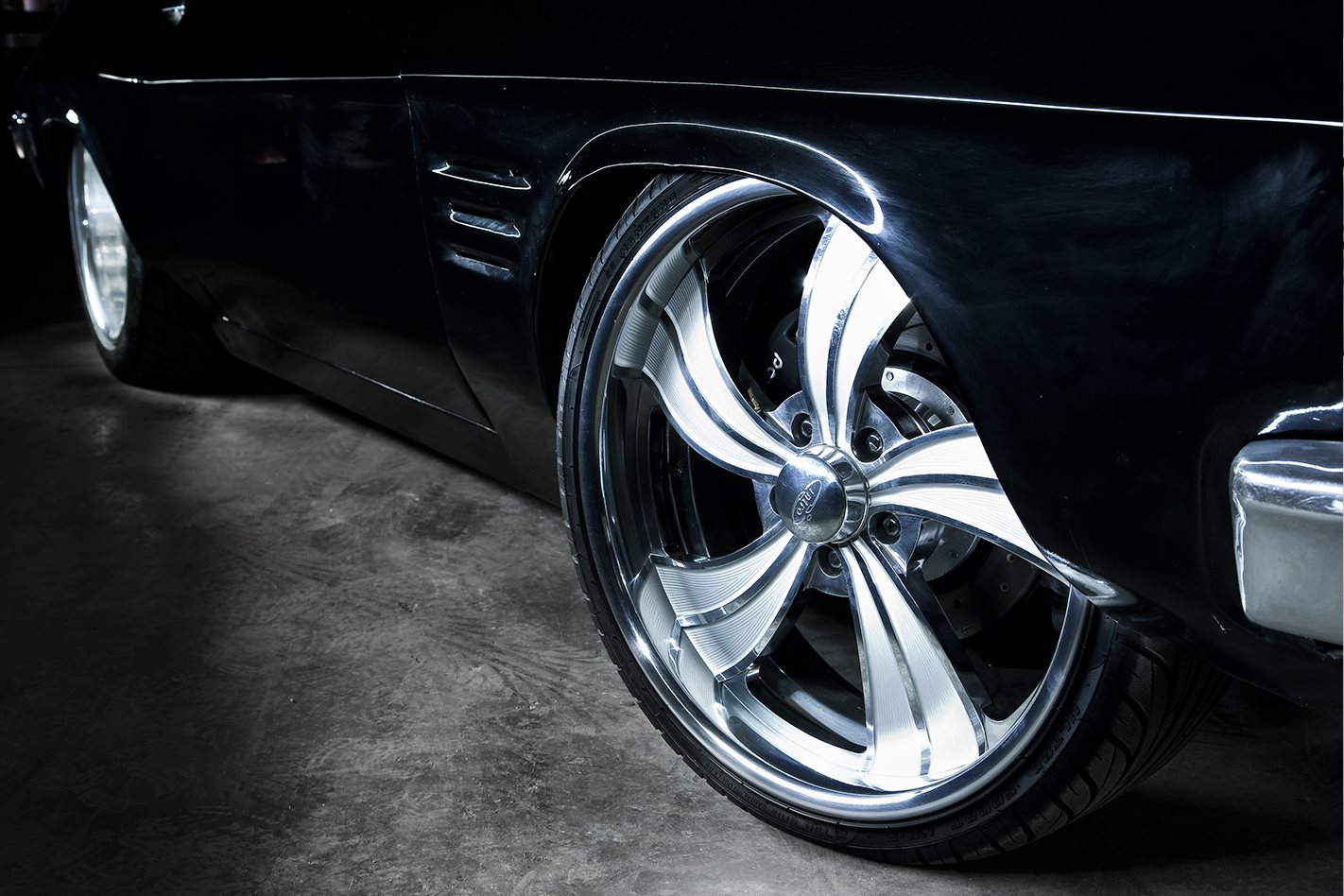 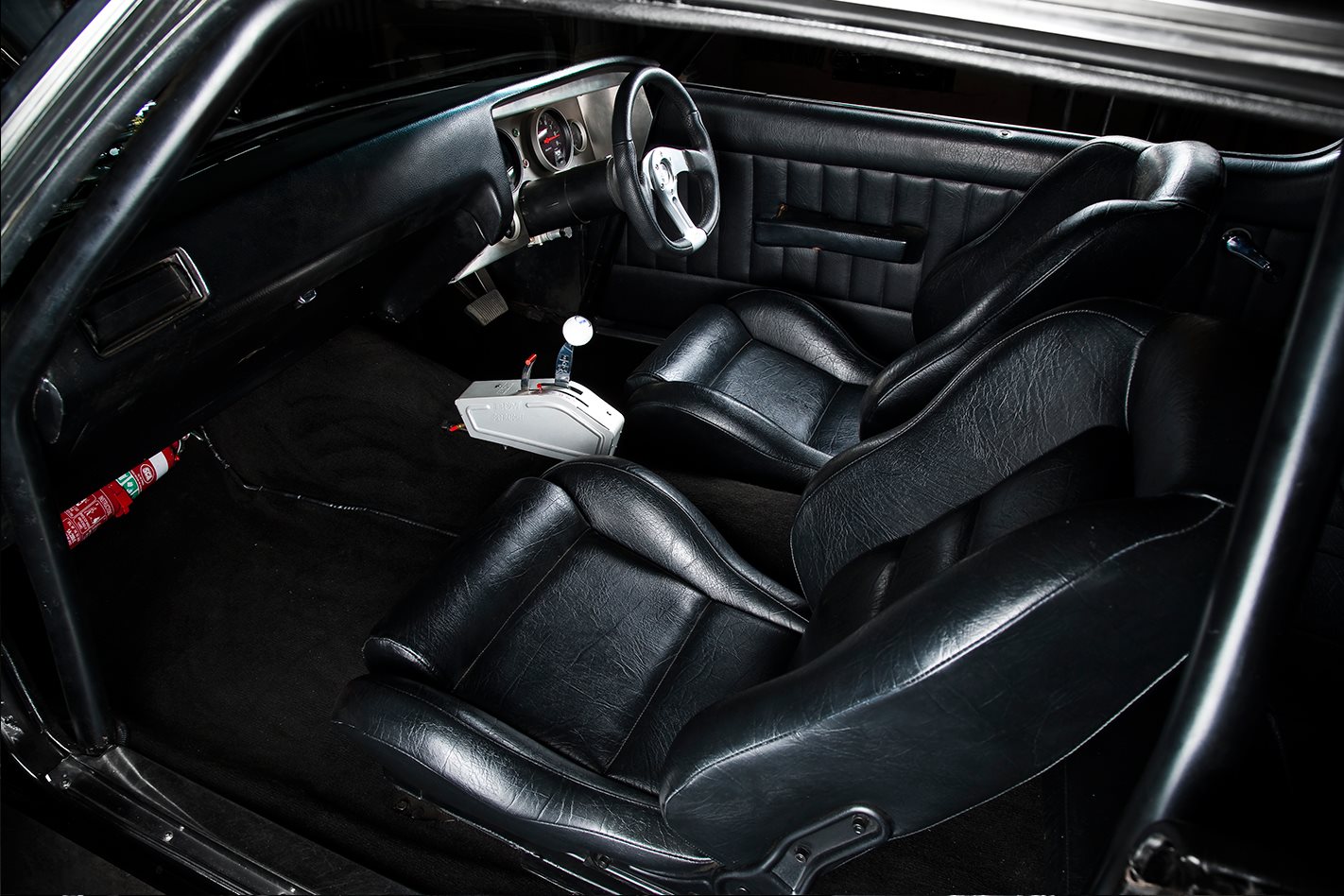 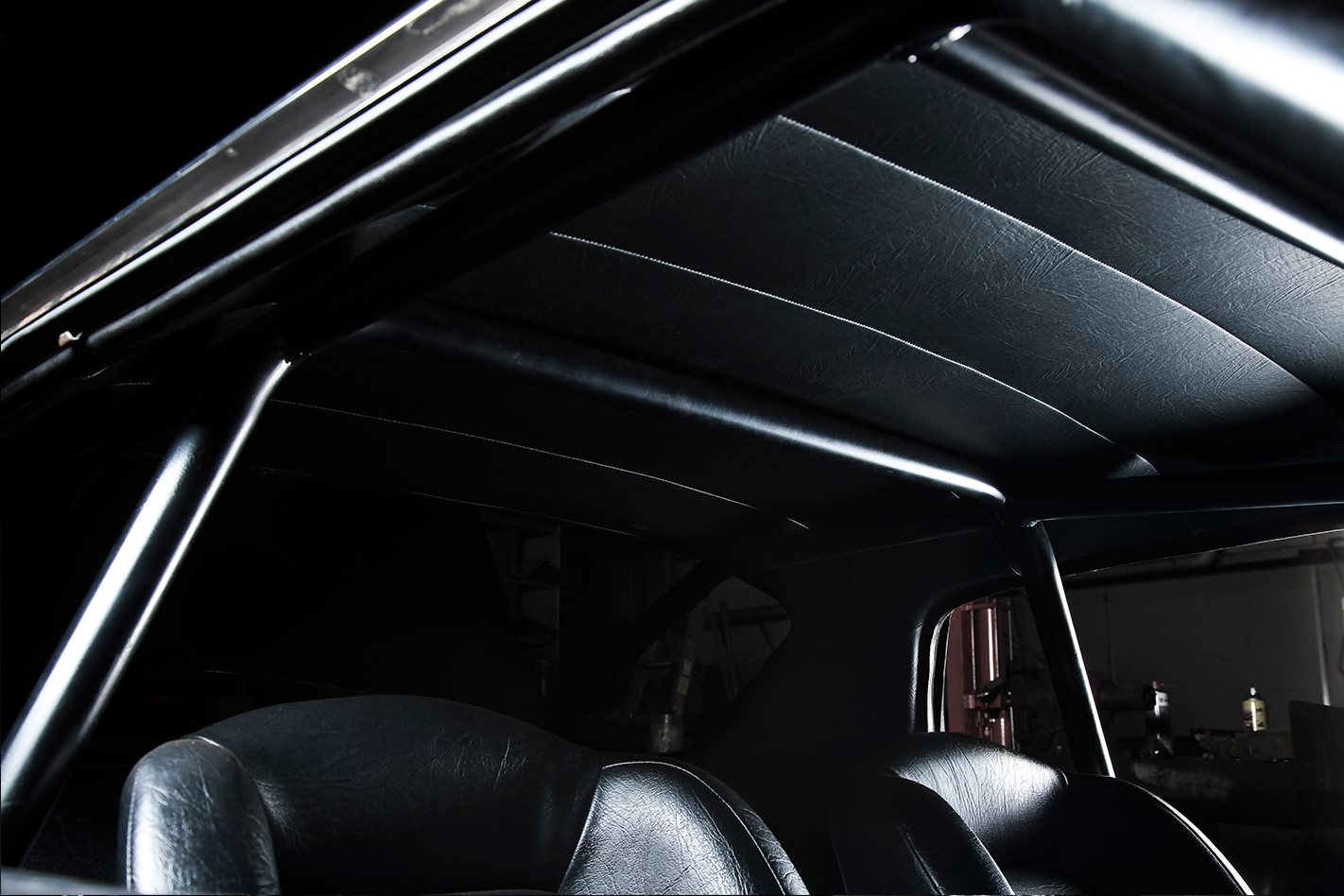 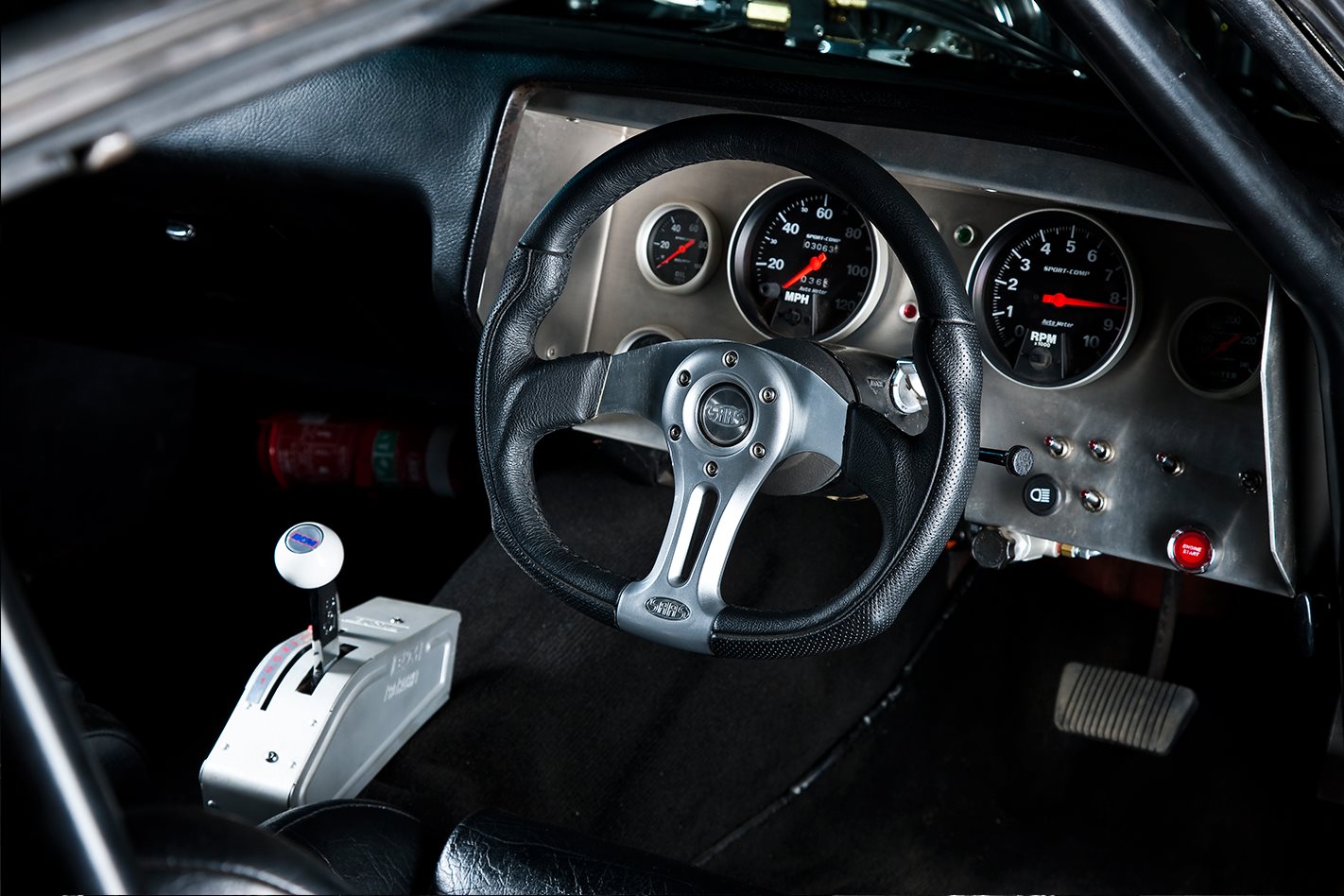 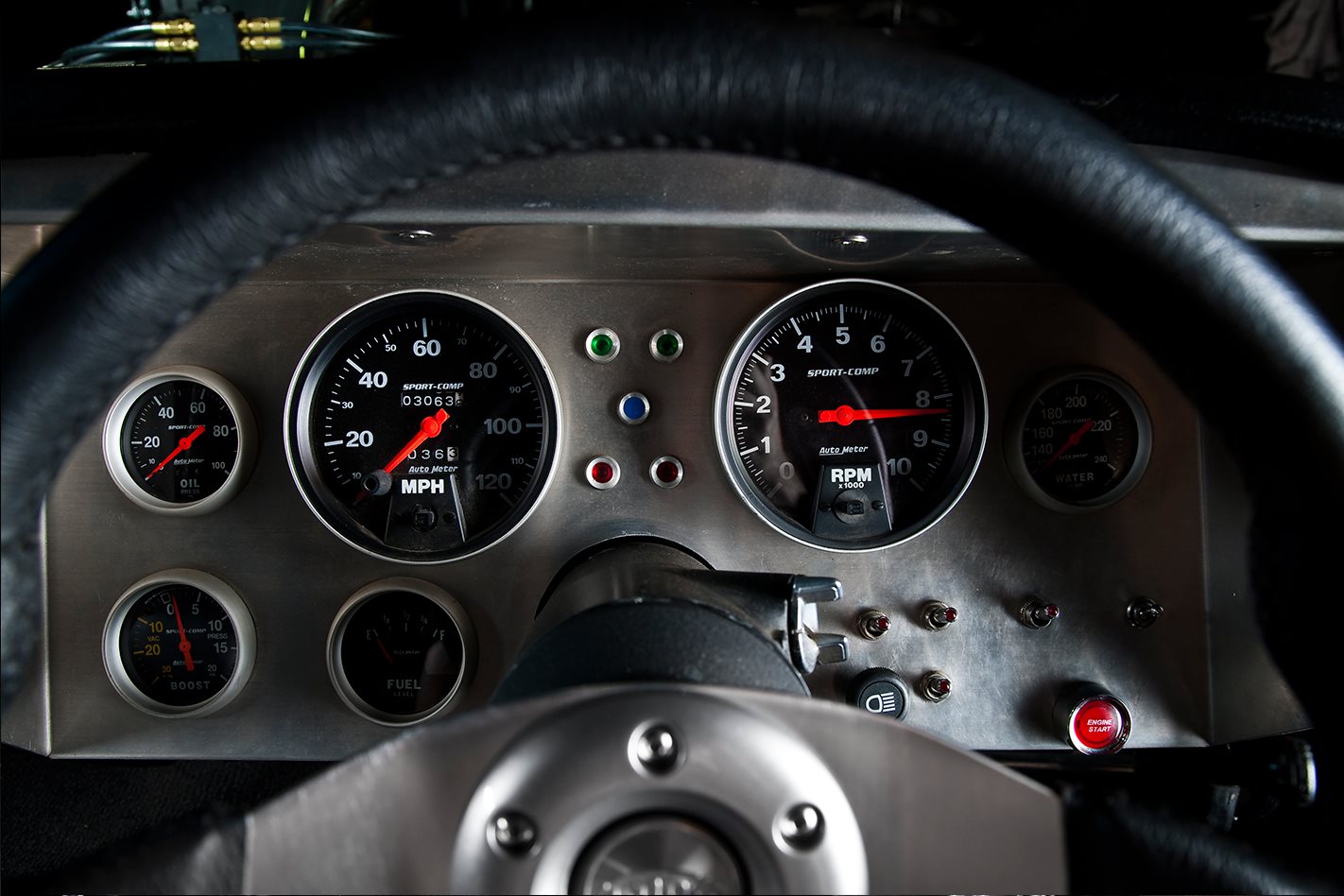 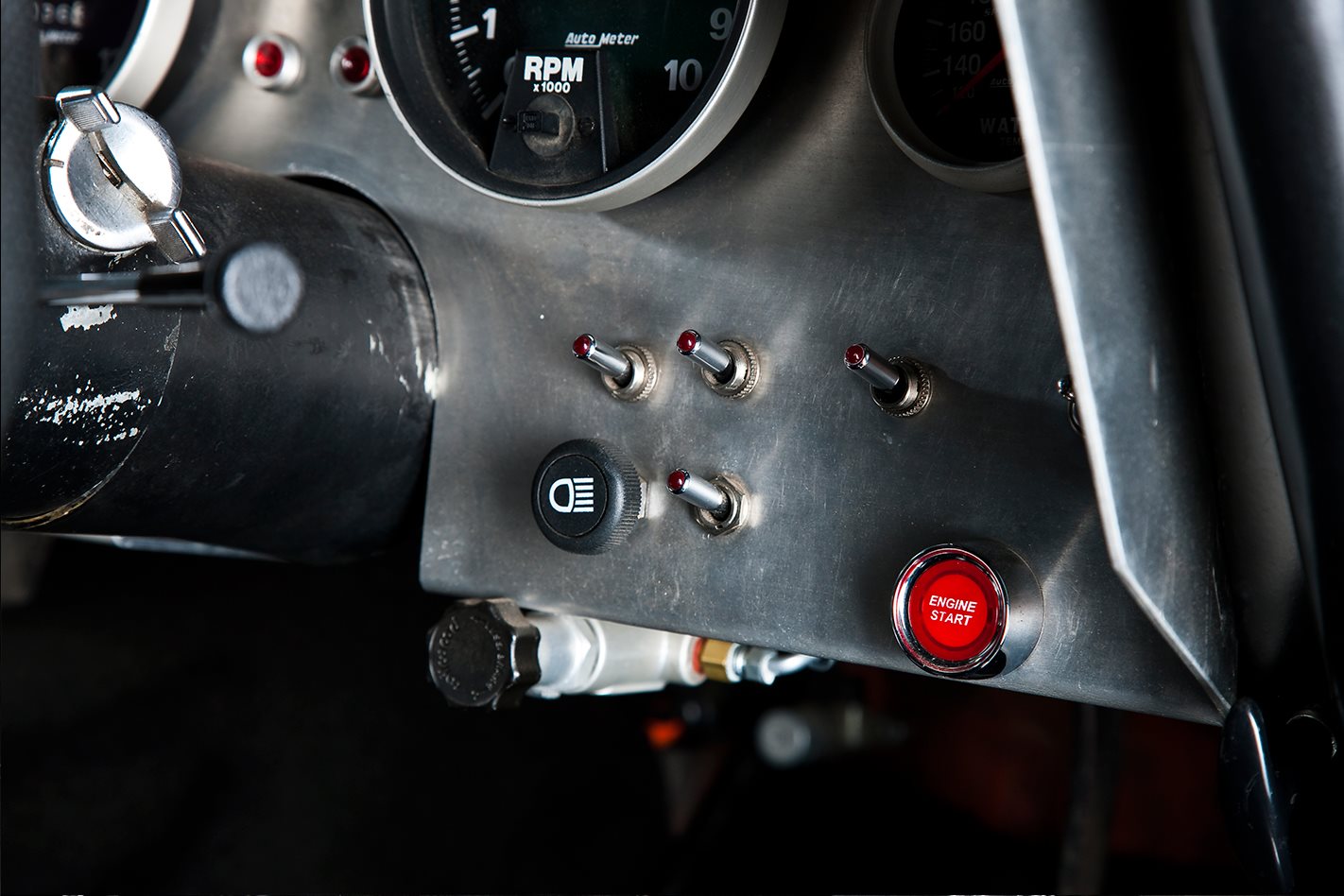 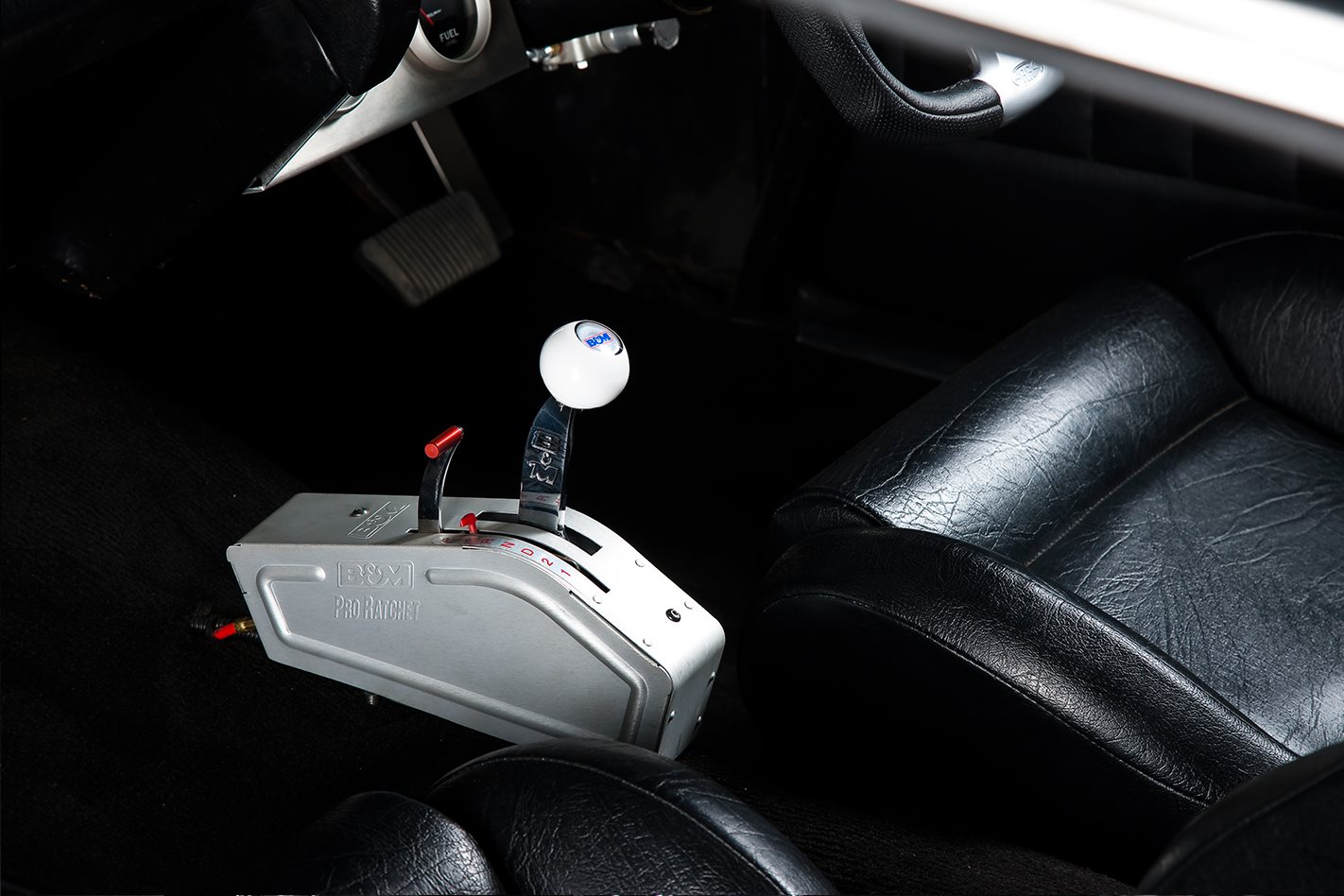 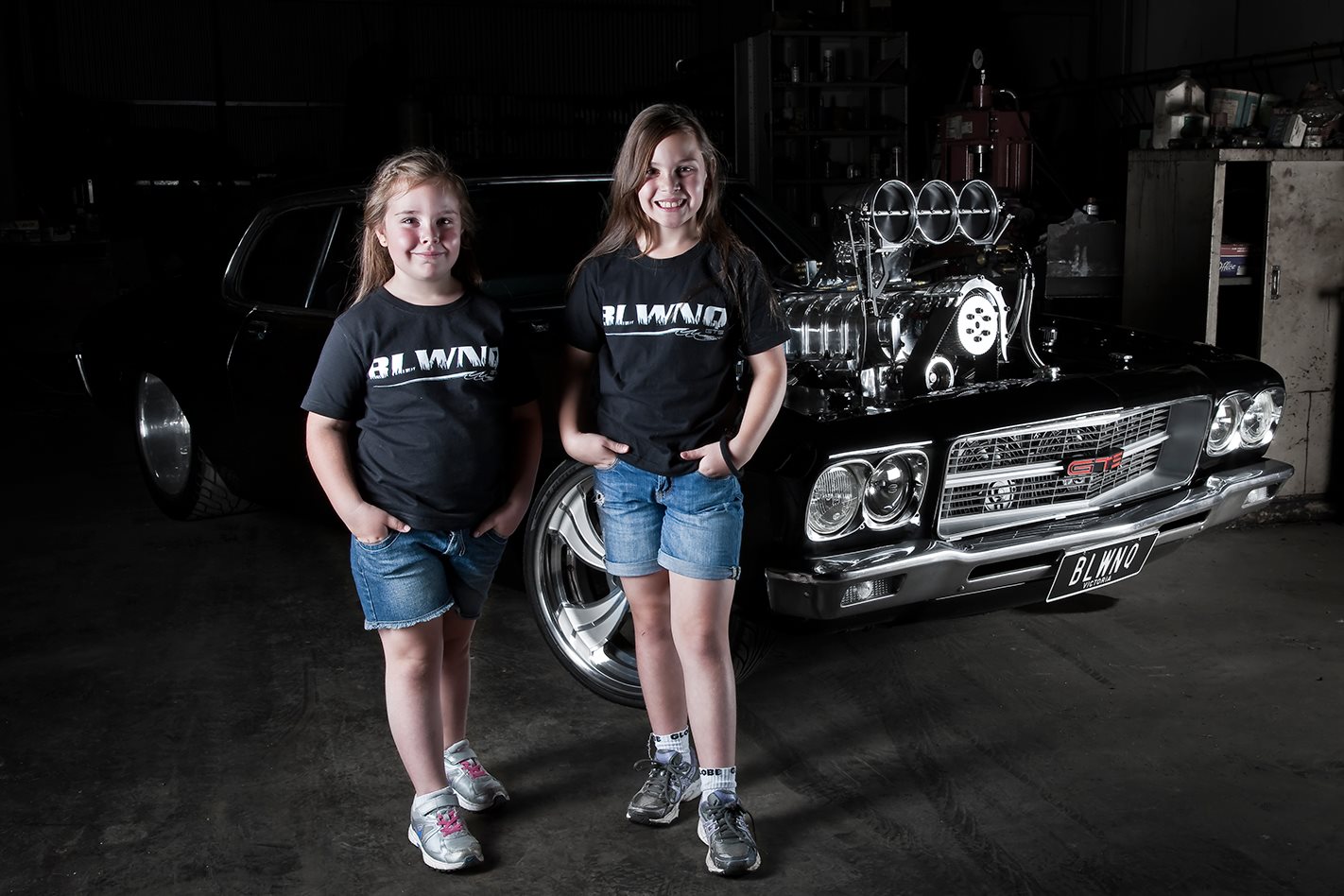