FOR Kerry Bartholomew it started when he attended an open day at Vintage Motor Garage. He mentioned to VMG’s Jonathan Houston that he had a 1956 Chev he wanted to tidy up a bit. A short time later, he drove his red and white sedan to the workshop with a brief to fix the door gaps and realign the bonnet. Which would have been nice. But ‘nice’ is too weak a word to describe the result here.

Clearly you don’t get a steamrollered stance like this simply by rehanging the doors. The Australian-assembled right-hook ’56 has been rebuilt from the ground up, with an all-new chassis and new suspension, a blown small-block, perfect paint and panels, an immaculate interior and show car finish. That’s the beauty of working with a one-stop shop like VMG — just about the whole job can be done in the one place. 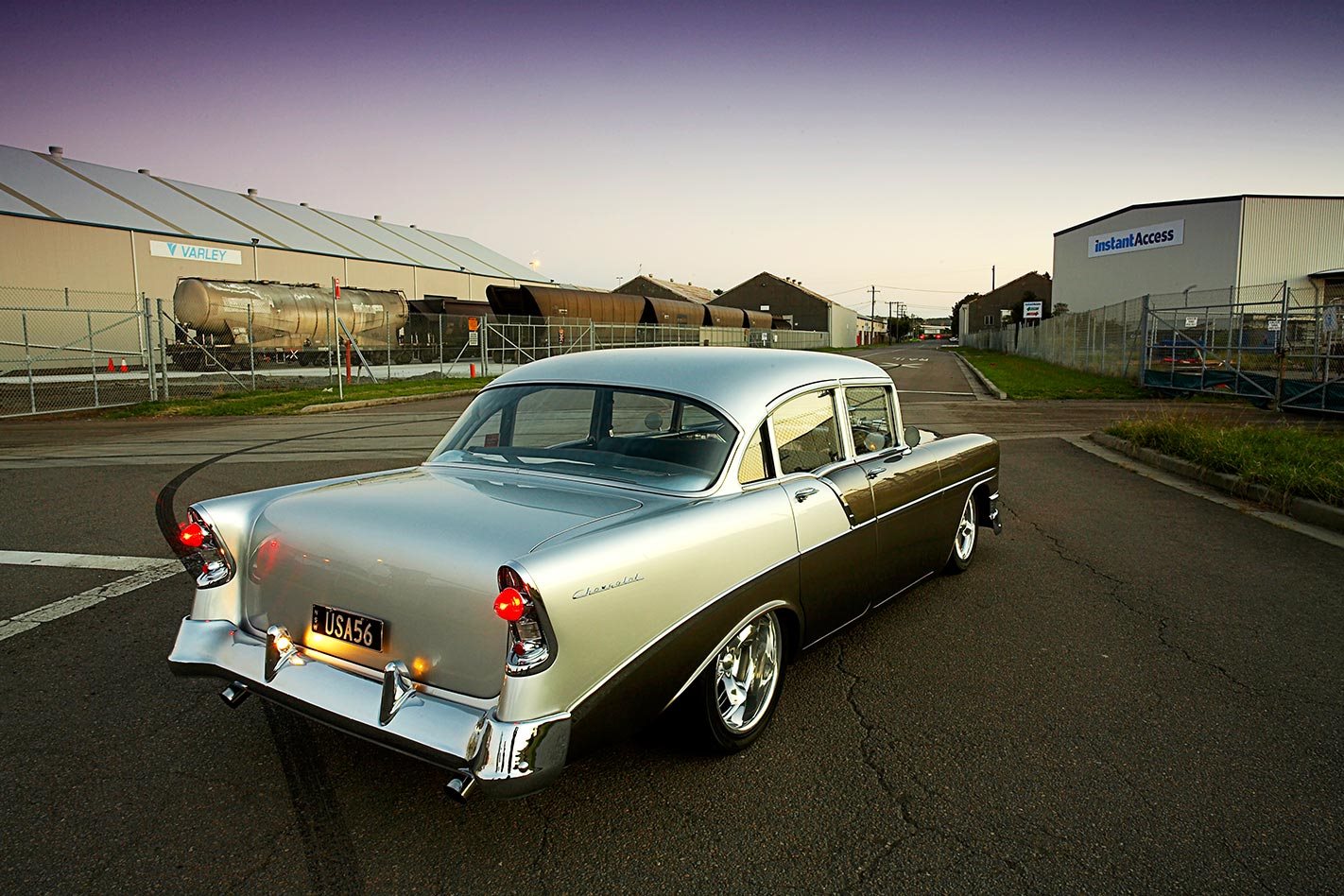 “We did everything on it except the engine,” Jonathan says.

The team at VMG on the NSW Central Coast stripped the paint off the Chev then soda-blasted the body and found that it was in good condition, which prompted Kerry to go further. He suggested slotting in a nine-inch, with disc brakes all around and rack and pinion steering, but by the time they added up the cost, a completely new chassis started to sound good.

“I wanted to improve the ride and handling,” Kerry says. “You’ll spend a lot to upgrade the original chassis but you still have the original suspension and brakes. The AME Tri-5 kit replaces everything.” 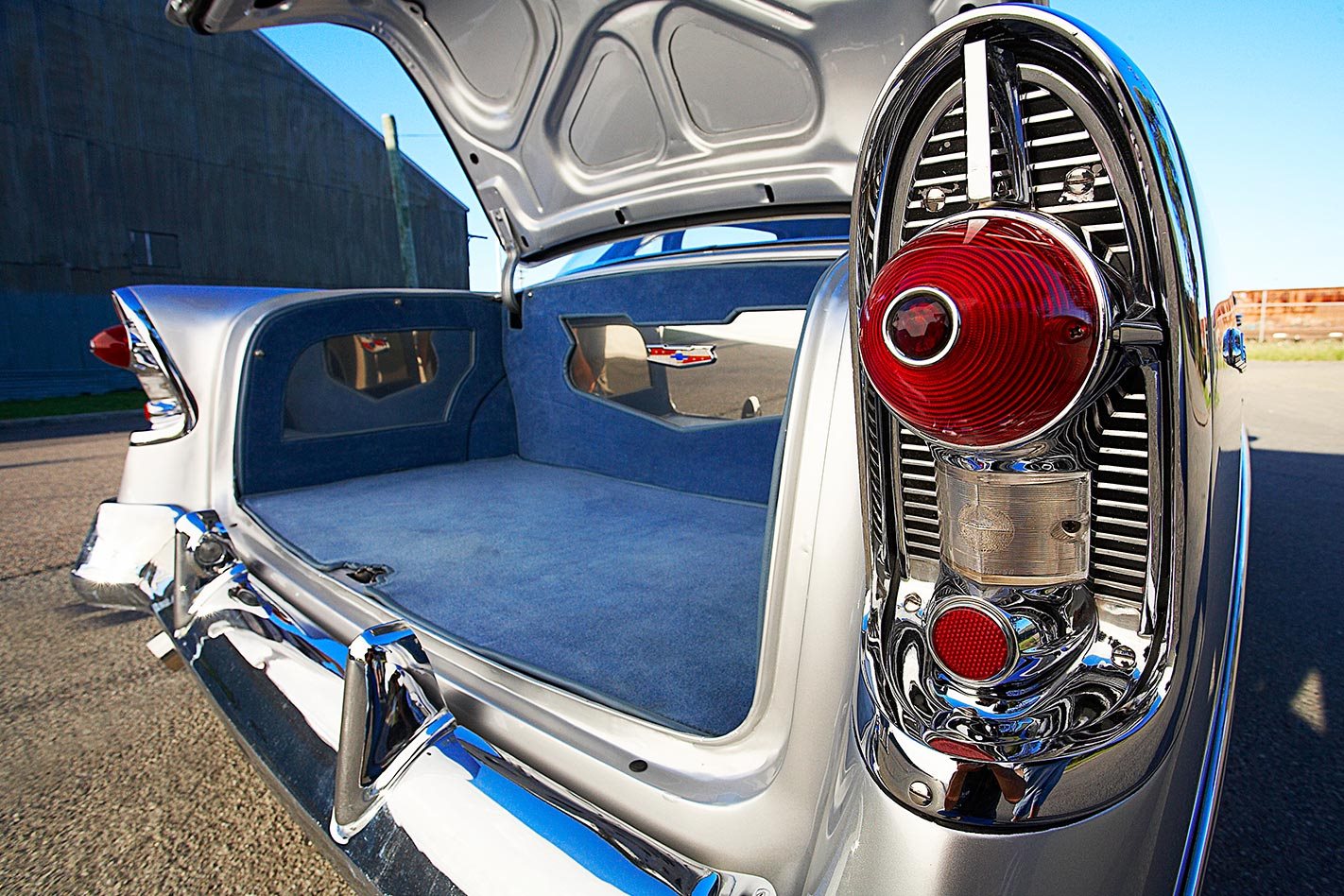 The Art Morrison Enterprises Tri-5 Chevy chassis is a complete replacement unit manufactured from 2x4in steel tube, with extra crossmembers for rigidity. The crossmembers have cut-outs so the exhaust can pass through them, keeping the car good and low. There are a few different suspension options; Kerry chose double wishbones up front and a triangulated four-bar rear, both featuring coil-over shocks. Other option boxes he ticked include power rack and pinion steering, Chev Camaro disc brakes, a Strange nine-inch diff, and the unique right-hand drive steering rack and body mounts.

The AME kit is properly complete — you can basically bolt your wheels on and your drivetrain in, then drop your ’55 to ’57 Chevy body on top using the original mounting points. Jonathan says that it only took a few minor modifications to mate the new chassis with the repaired body. 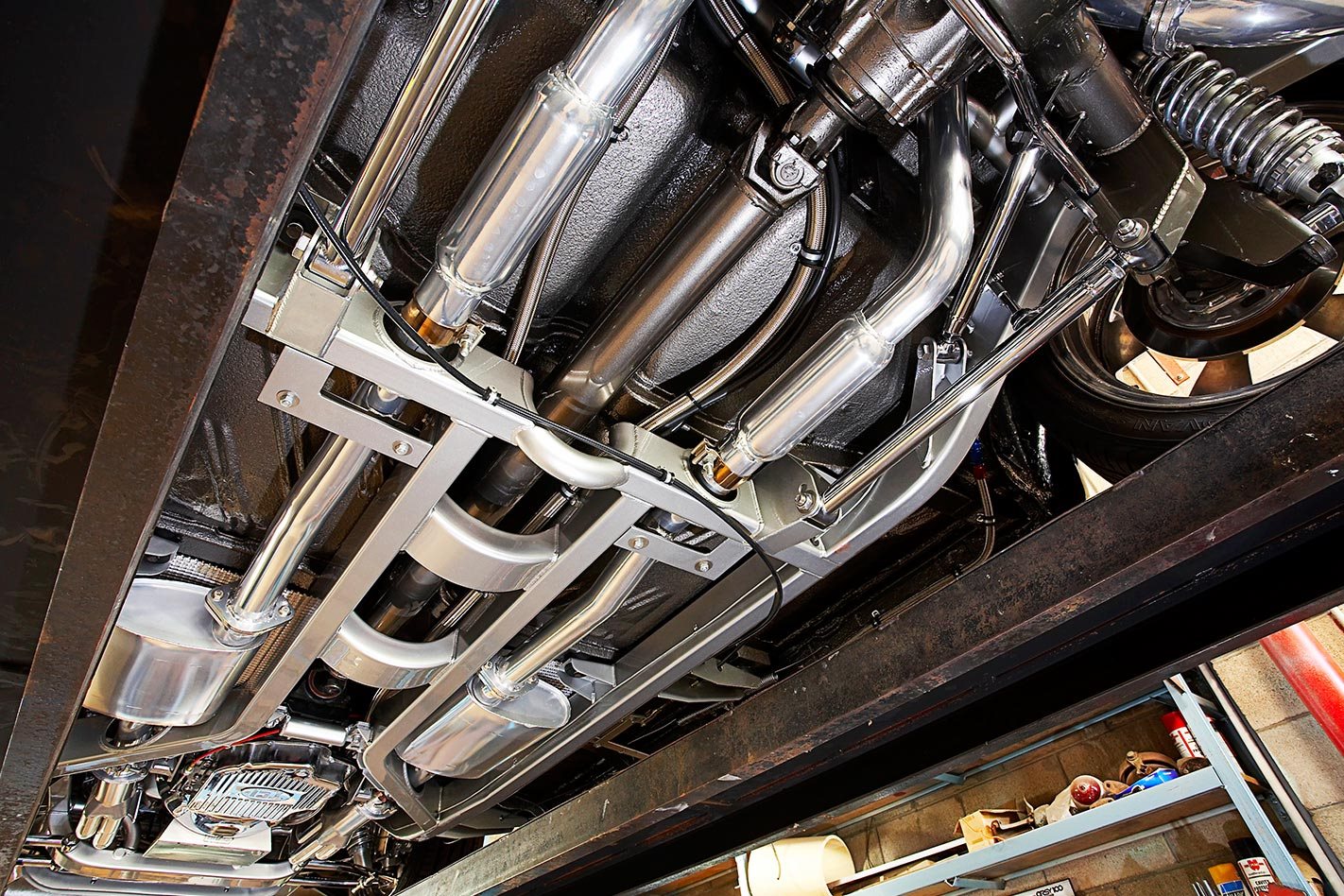 A triangulated four-link running coil-overs suspends a disc brake-equipped 9in rear axle. The underside has been detailed to highlight the impressive AME chassis and suspension. Note how the exhaust system passes through the chassis crossmembers

Thanks to the stiffer chassis and modern suspension, Kerry’s Chev now rides and handles like it’s generations younger than the original 50s machine.

Rather than simply bolt it all up, VMG detailed the new kit, chroming the suspension arms, ceramic-coating the coil-overs and painting the chassis the same silver as the roof and quarters on the body.

The body only needed a little bit of rust repairing and retains the standard sedan style and lines. Closer inspection reveals that the gutters have been removed for a cleaner look; similarly, the front quarter-vent windows were dropped for one-piece glass. And of course the bonnet had to be cut to clear the carbs. VMG applied the DNA Gunmetal Grey and silver paint, while replacing most of the chrome work and rechroming a few parts. 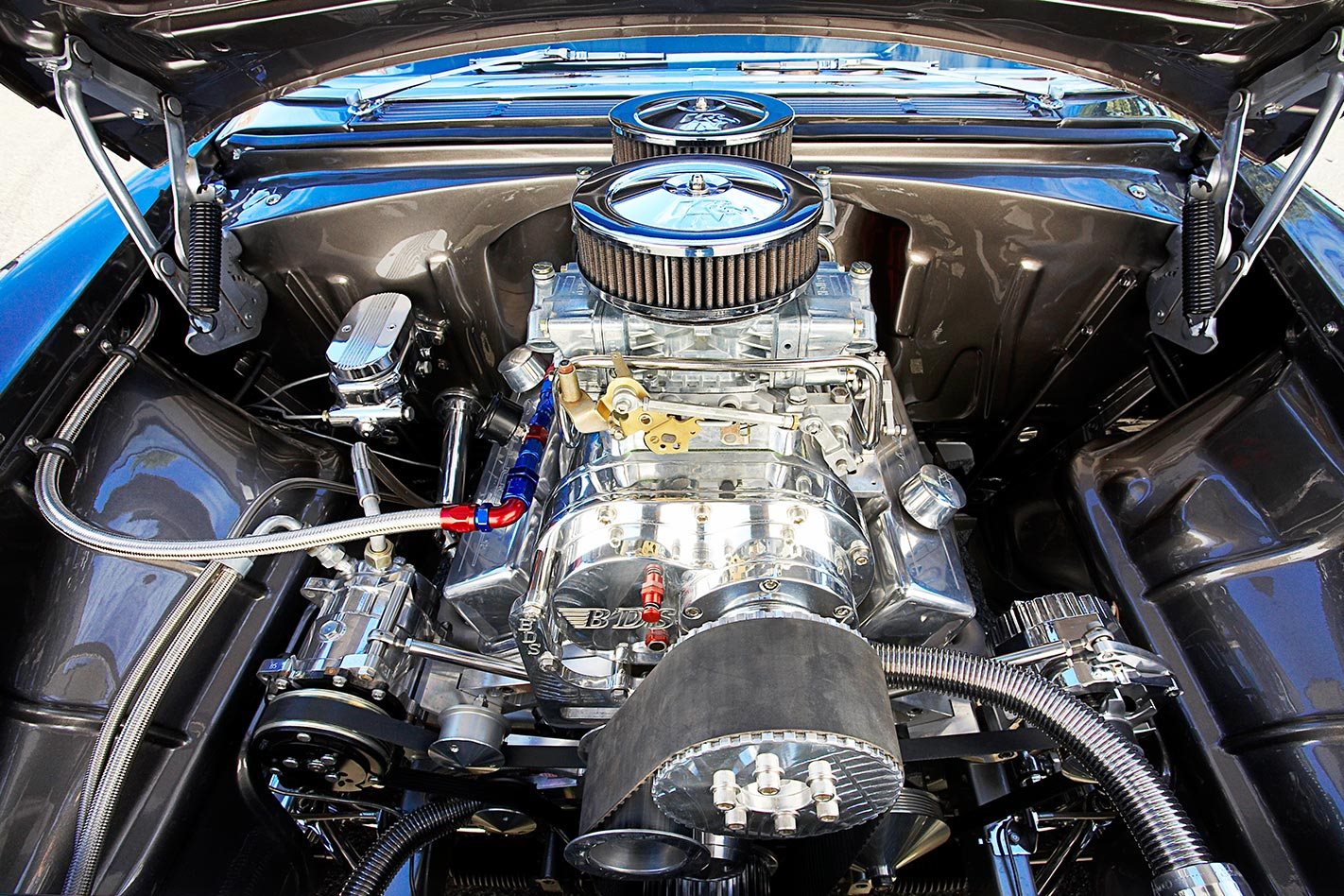 The 550hp Chev is all-new from its K&N filters to its High Energy oil pan, including BDS blower kit

When Glen Crowther had finished with the body, John Viles took on the interior, giving it a full retrim, smoothing the dash and removing the switches, fitting Dakota Digital gauges, electric windows, and a concealed sound system — which Kerry says never gets used as he prefers to listen to the blown engine. The switches, stereo and ignition are all tucked away in the glovebox.

The door trims were created from scratch and the base of the front seat was remade to a new shape. The steering column is a Flaming River unit wearing a Grant wheel, while the aftermarket air conditioning system was bought locally. The boot received similar trim treatment, with contrasting mirror panels.

After searching far and wide for a suitable engine builder, Kerry eventually went with Phil at Chev Power all the way over in Perth. Phil built up a blown small-block, starting with a brand new GM four-bolt block, Scat steel crank and rods, SRP pistons, Comp Cams hydraulic bumpstick, RHS iron heads with Comp Cams valve gear and Ferrara valves. The crowning glory on the mill is a complete BDS blower set-up comprising the 6/71 lung, manifold and drive kit, plus a pair of 600cfm Holley blower carbs. 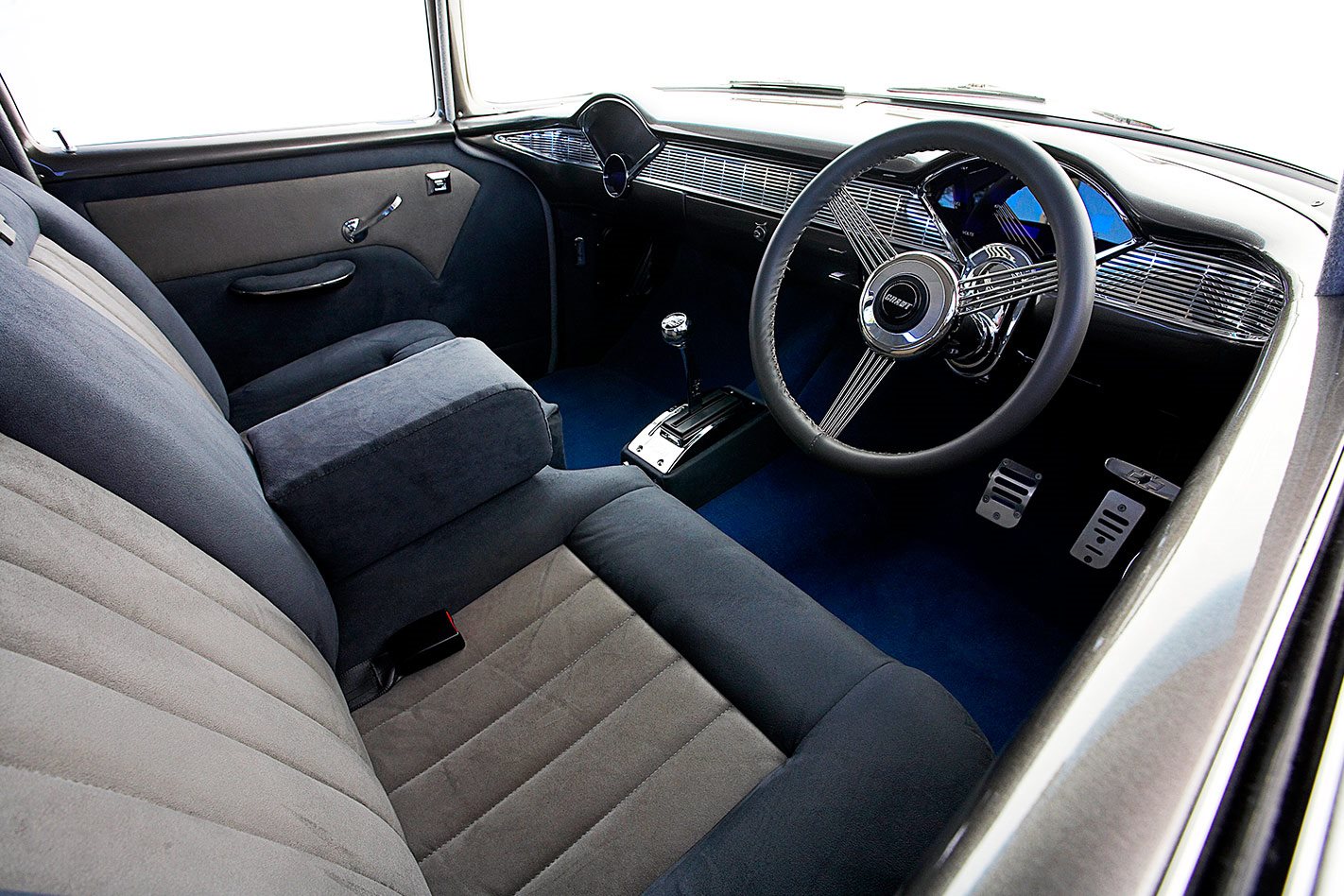 Interior design is subtle and refined. There are no switches or buttons on the dash with most relocated to the glovebox. The indicators and horn buttons are on the console by the B&M shifter

The stout mill was built as a tough street engine and when it was run in on the dyno it made close to 550hp. It was then packed up with a US-built TCI Street Fighter Turbo 400 auto ’box and a TCE 2500rpm stall converter and shipped east, to Kerry’s awaiting Chev.

The full assembly and finishing off was overseen by Jonathan. VMG used braided stainless steel lines throughout, added new wiring and a set of Coddington Junkyard Dog rims, then gave everything a test-run. It ended up being a drive-in, drive-out job that took two years and a trailer-load of dollars but avoided the woes that often afflict such masterpieces.

“The only problems were choosing the running gear and colours, and getting all the pieces to finish the project,” Kerry says.

He admits that now that it’s finished, the Chev only gets the occasional weekend cruise, spending most of the time inside his house in what used to be his dining room! Howzat for a great conversation piece at dinner parties? If only there was still a dinner table.