WE SEE all kinds of projects here at Street Machine. Some are mapped with architectural precision while others start off with the owner buying a new set of rims, which leads to fresh paint, then a new motor and so on. 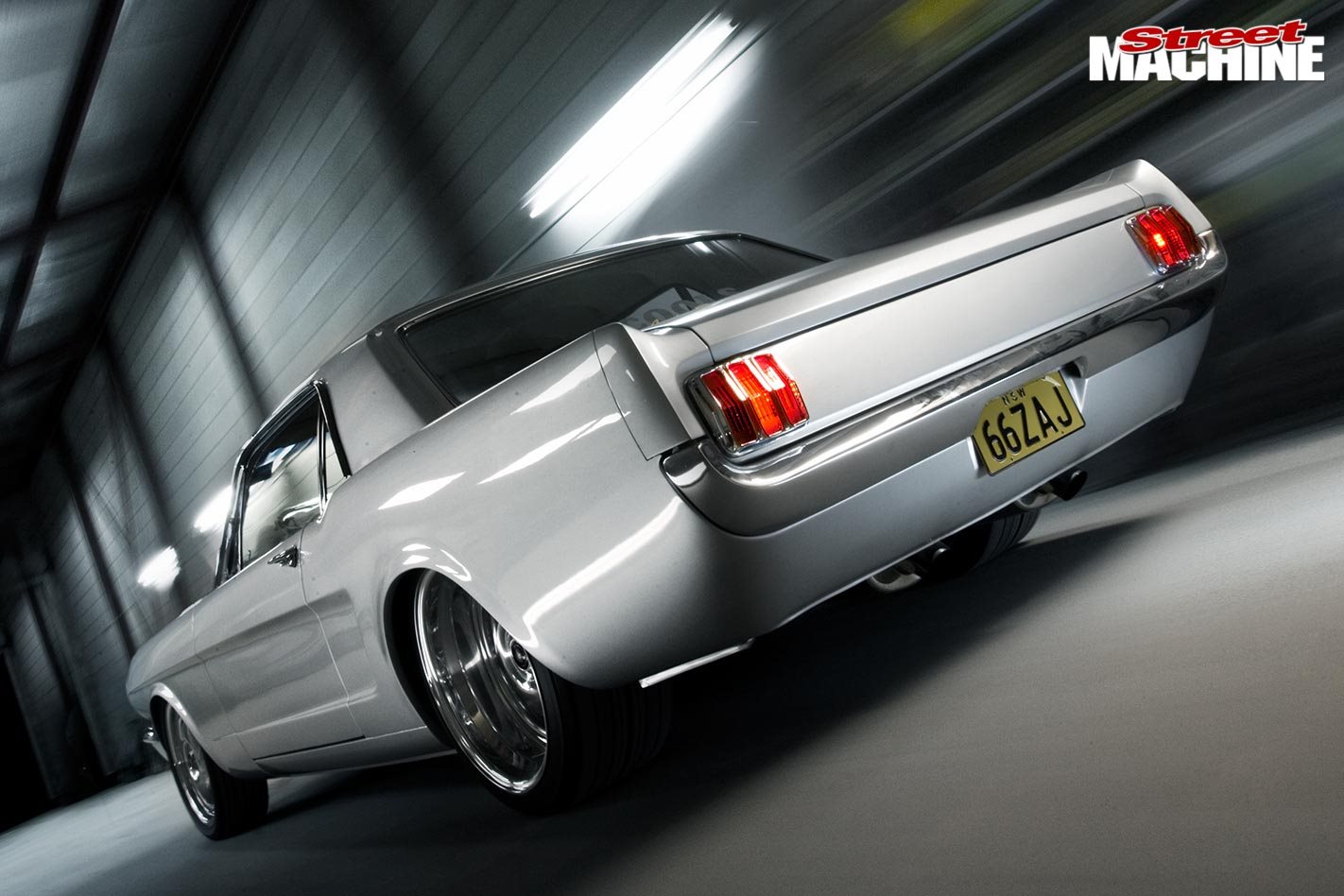 Paul Zajakovski’s stunning ’66 Mustang falls somewhere in the middle. It was always the intention to build something neat but describing this fine example as ‘neat’ is like saying Christina Aguilera has an okay body.

After selling a tarted-up Datto ute, Paul went looking for something with a bit more style and he found this clean Mustang lurking in the pages of Unique Cars. 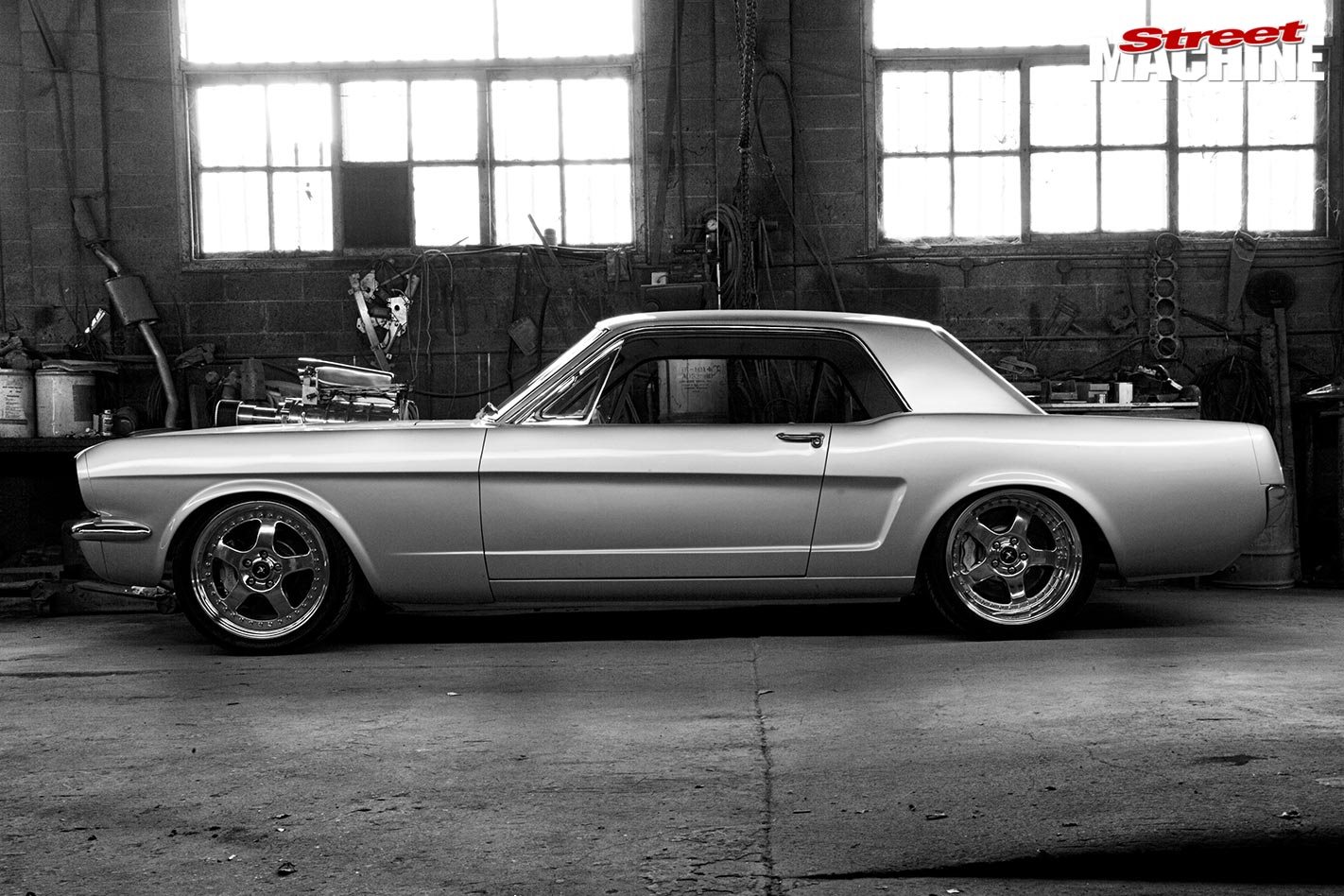 Being a fairly clean Californian car it had plenty of potential and an odometer that showed 36,536miles on the clock. Paul doesn’t know if that mileage was genuine but it only took a lap around the block to realise that something had to change: “It was still LHD when I got it and I hated that.”

From there it was straight down to the business of stripping the pony to a bare shell using “good old-fashioned paint stripper and elbow grease”, according to Paul. There were some nasties hidden under the paint — such as the four inches of bog in the driver’s door — but generally it was a good shell to work with.

With Paul’s dad, Arthur, working in a panel shop, this was always going to be a father and son project. Paul says there was a bit of argument over what kind of Mustang they were going to build:

“Dad wanted a Fastback and I wanted a coupe.” Seems Dad doesn’t win every argument. 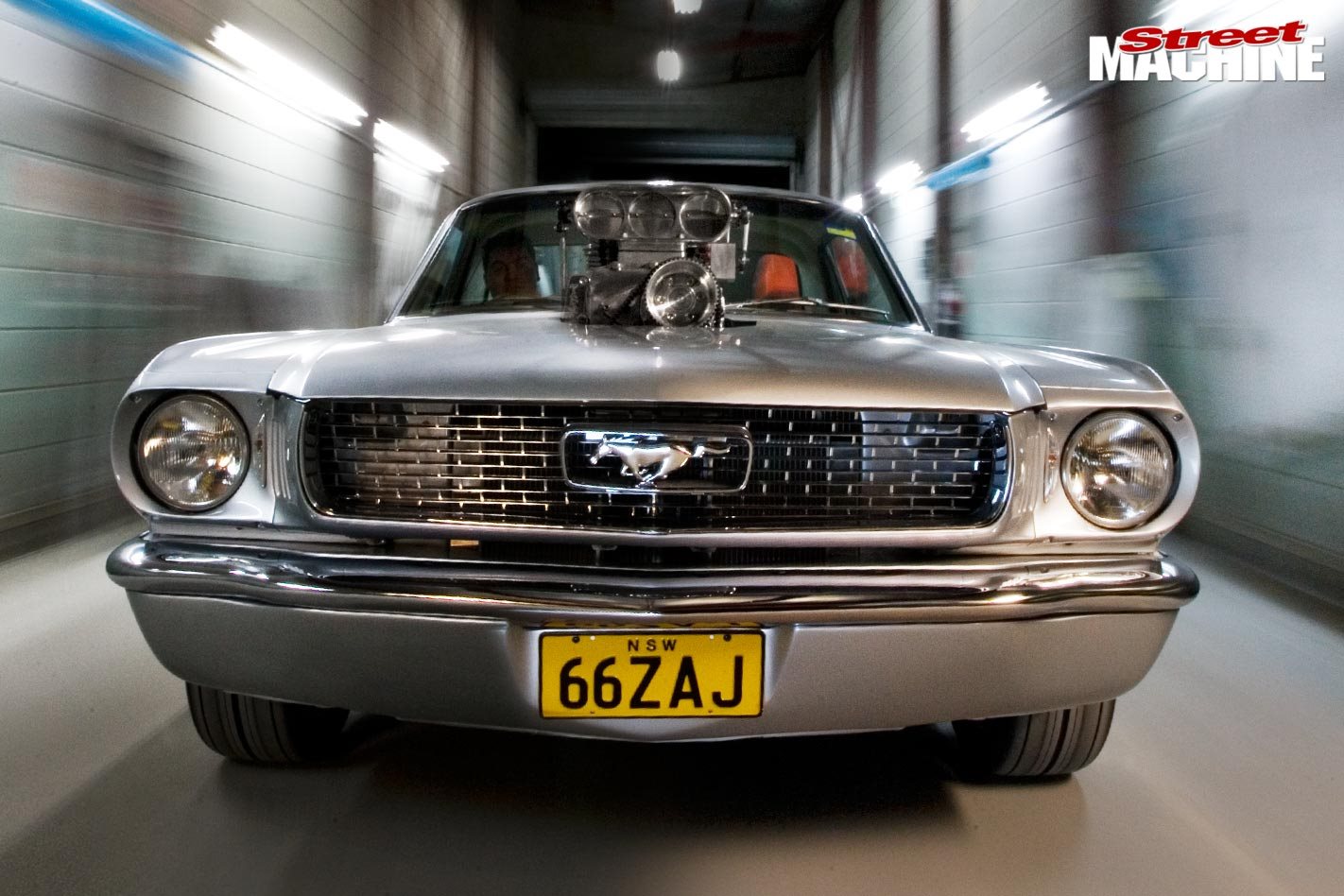 Arthur built a rotisserie for the car and that’s where it stayed for more than a year as they mini-tubbed the rear, installed a four-link and raised the transmission tunnel. Lifting the tunnel allowed them to raise the drivetrain and suspension, permitting further lowering of the car without interference.

Up at the pointy end, they set the engine back by 50mm and flat-sheeted the inner guards and firewall, in addition to modifying the suspension towers.

You might have noticed there’s no brake booster in the engine bay — that’s because there’s a Hiace unit tucked up under the dash. Neat, huh?

The badges, trim and fuel filler were shaved and Paul says he’d have lost the door handles too if he could have registered it without them. As it is, anything that doesn’t have to be there, isn’t. Even the indicators have been minimised — up front, a pair of ’03 BMW indicators sit just in from the headlights, while the brake lights have been modified to include indicators in the outer third of the lens. 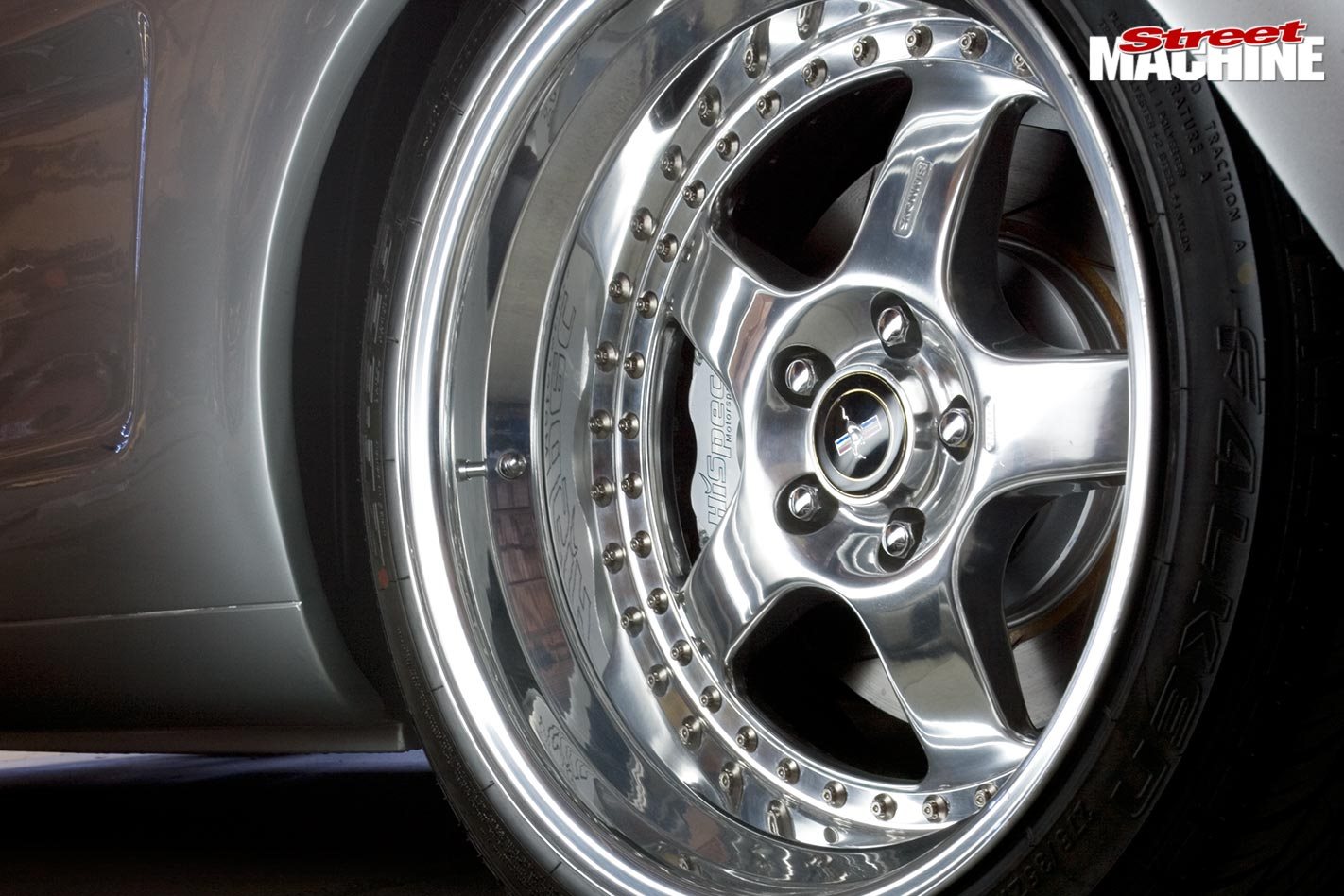 That’s a lot of effort to go to. “I really didn’t like the big bulky blinkers they come with,” Paul says.

He continued the smooth theme inside too, restyling the dash with a streamlined look and an armada of Auto Meter dials. The boys also found time to put the steering wheel on the right side.

Like so many car builders, Paul says that every part of the car received more attention than he’d intended and in his case ‘just a neat rebuild’ turned into a massive four-year build up: “The whole car was just one thing leading to another.” 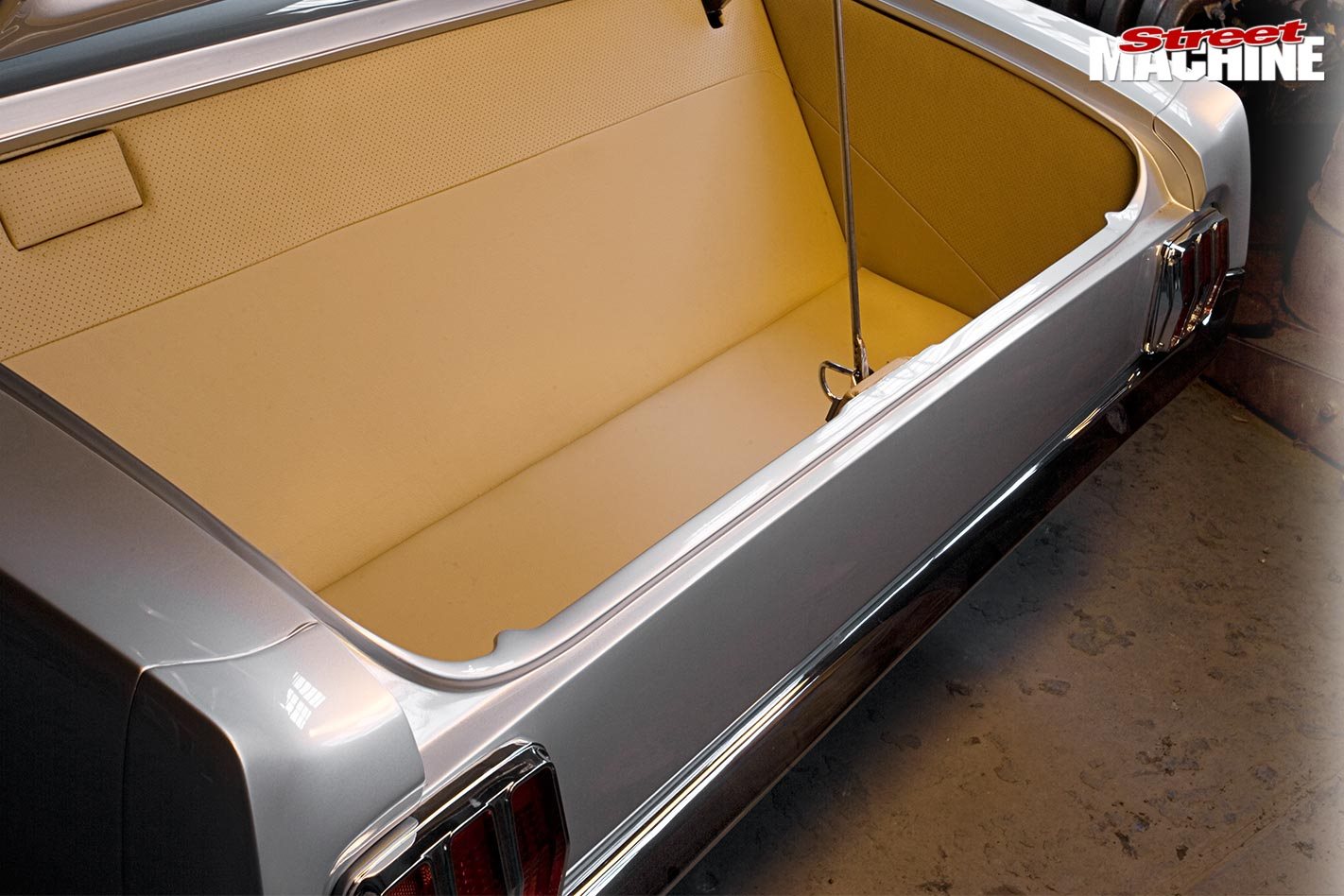 The boot’s trimmed but still useable. Paul’s mate Joey crafted the hidden 90-litre tank. Note how clean the rear panel looks without the huge filler you normally see on Mustangs

The front pews have been trimmed in more ways than one. Not only are they covered in tan leather but they’ve had two inches chopped off the height so they sit level with the windowsills. Steve from Cool’s Auto Trims was responsible both for carving and covering the seats, while Arthur added his own styling touches with the cool aluminium tubing in the door trims. In the back, the standard rear bench has been replaced with a custom item, styled to match the front Recaros.

Entertainment is supplied by an in-dash Kenwood DVD/TV unit — as if the blown small-block wasn’t enough fun.

Talking about the donk, this isn’t your average gas-guzzler. Paul Sant from Pro Flo Performance knows a thing or two about tough engines so he got the job of slinging together a strong bottom end for the Muzzy.

The instructions he was given called for a reliable blown motor but nothing too drastic. That said, a blower wasn’t on the cards when the project started. 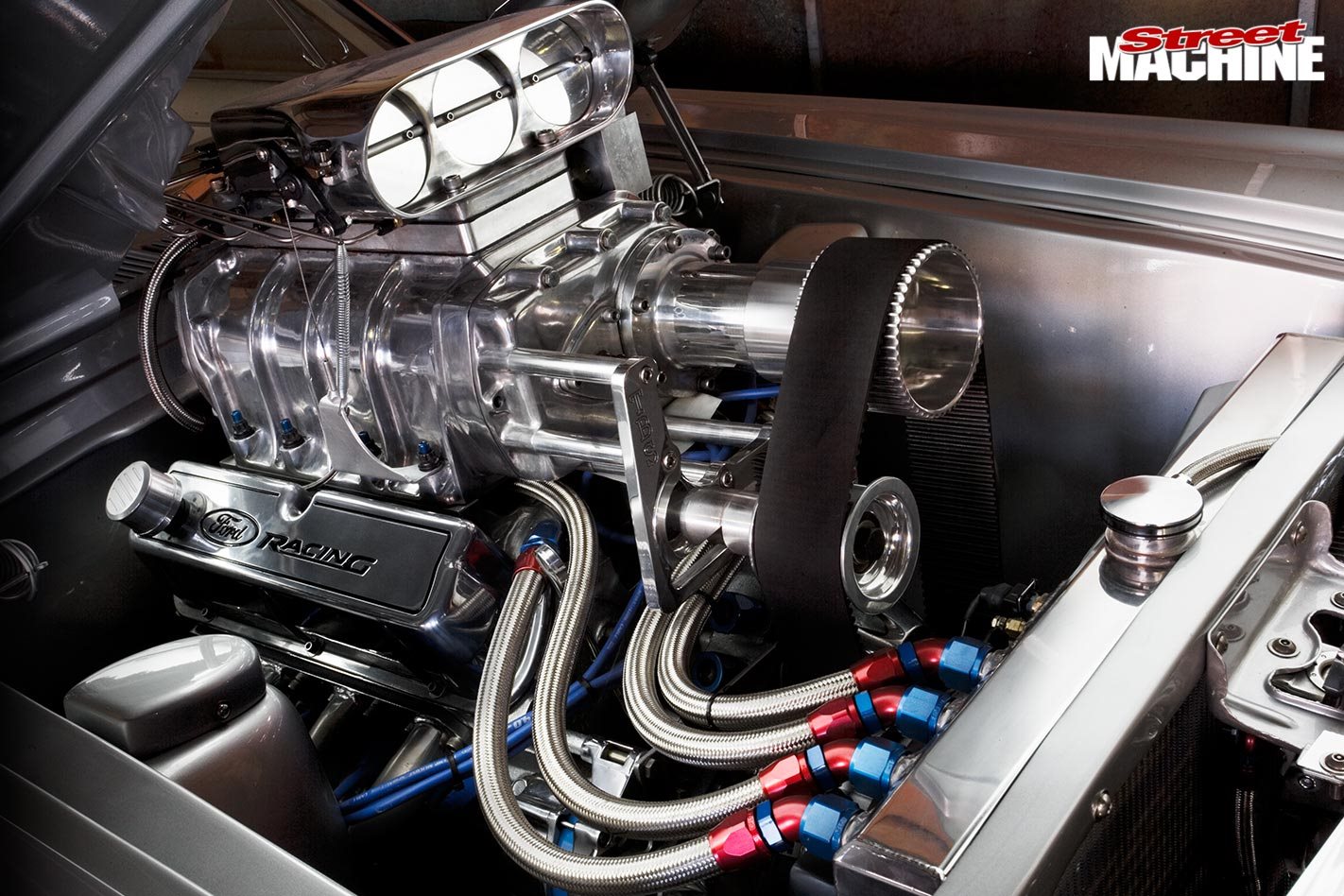 Looks like it drinks methanol but it’s just good old premium unleaded with an EMS computer running eight injectors. Paul keeps it cool by running water through the heads, which explains all those extra coolant lines

One of Arthur’s mates was showing off pictures of his new blower and that ignited a spark in Paul’s mind. But it wasn’t until a blower kit was found that things started to really kick into gear.

While the bottom end is filled with good gear from SRP, Eagle and Camtech, up top the motor got a modern twist with EFI.

Can’t spot it, can you? Looking at the pictures you’d swear the car was running methanol injection but there are eight 42lb injectors hidden between the Enderle hat and the blower, while an EMS 8860 controls the show. Running the injectors in this fashion might not give you the pinpoint accuracy of a port-injected set-up but it’s still a million times more practical than using methanol injection on the street. On top of that, running fuel through the blower helps keep it cool. 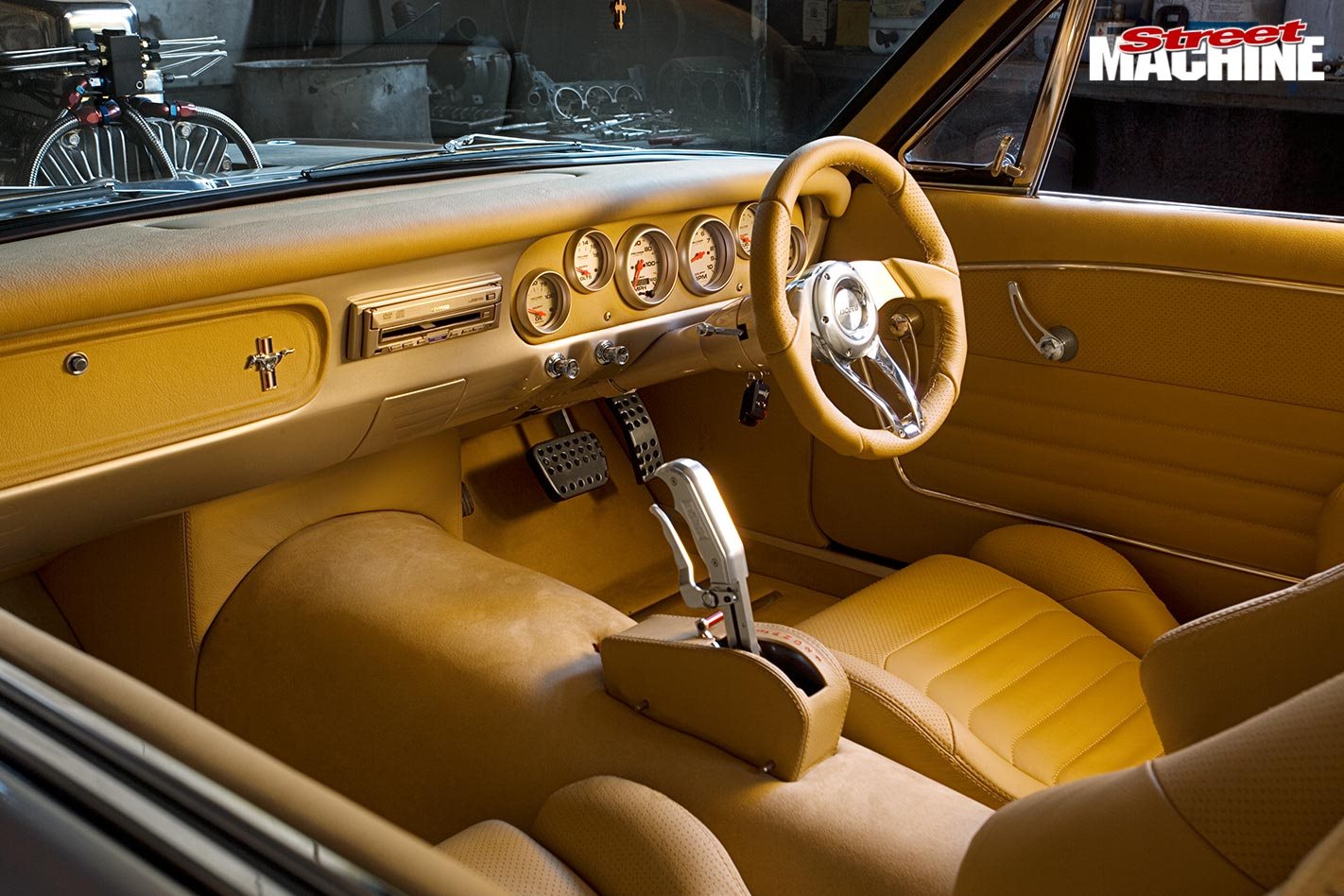 Getting the engine into the car was a battle though: “It took lots of rags and towels taped to the car,” Paul says. You certainly wouldn’t want to scratch that paint. In fact, to make sure the car didn’t receive any workshop scratches, the guys had a trial run.

“Everything was put on the car and we dummied it up,” Paul says. “Then we pulled it apart, painted it and put it back together again.” That way they knew everything was going to fit on the final assembly and the paint would be safe from welding burns and fabrication marks.

The first time Paul got to seriously drive the car was on his wedding day, which had become the target date for the build, so it was a special occasion for many reasons. Luckily, wife Aleksandra has no problem sharing her hubby with the slick Mustang. 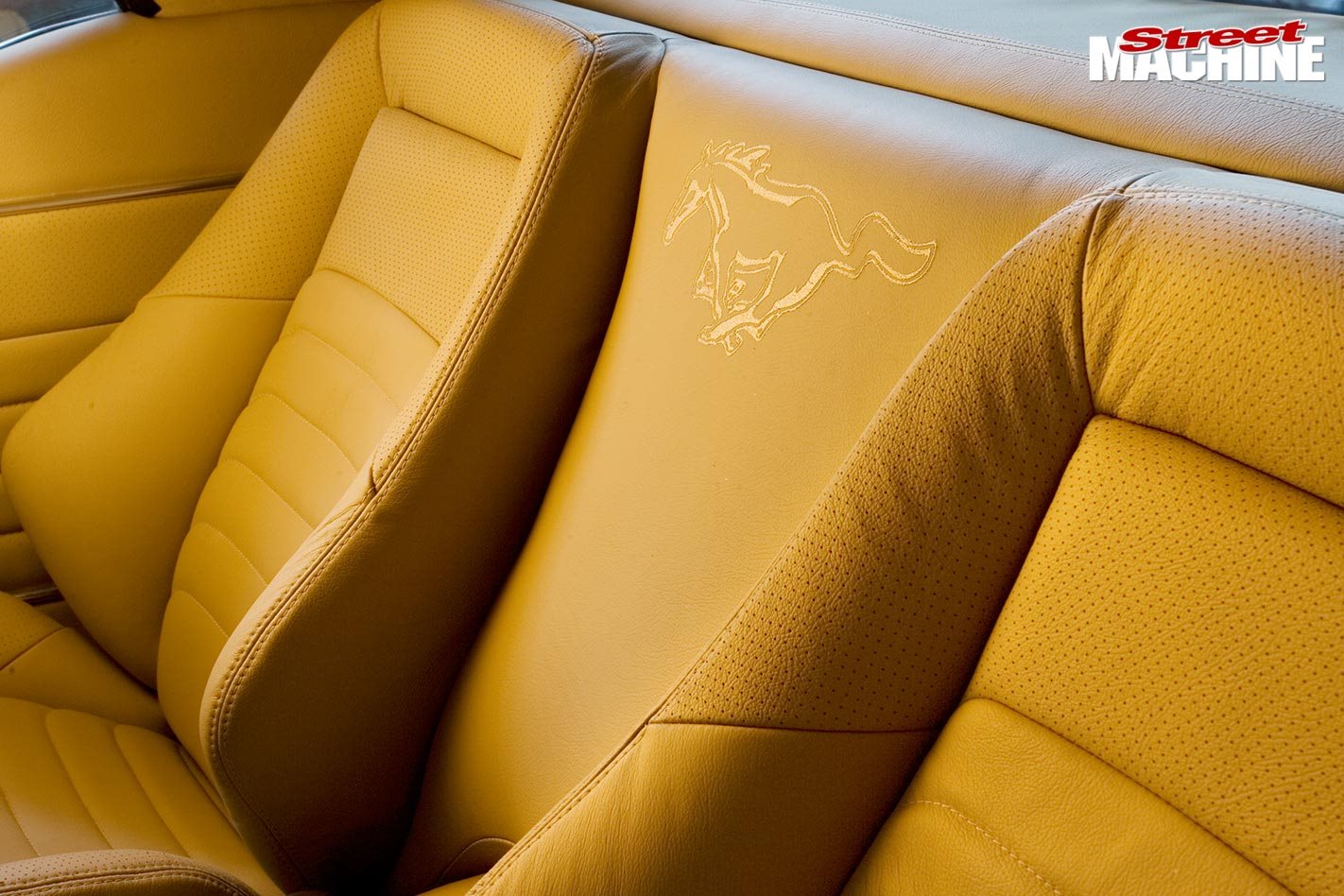 So what about racing — any desires in that direction?

And how about a Fastback for Dad?

“Not much chance of that at the moment,” Paul reckons. “But maybe when he retires, when he’s got some free time.”

THANKS
Dad, Arthur, as he basically built the whole car from scratch. Aleksandra for understanding what the car means to me and Dad; mum, Lila, for sponsoring the project when I was short of cash. Steve, Cool’s Auto Trims; Paul, Pro Flo Performance; Mark, On Track Auto Electrical