I’VE always wanted either a Mustang or a Camaro,” Paul says, “and this came up. I wanted something pretty killer; you know, good horsepower, looks the part and goes the part.” 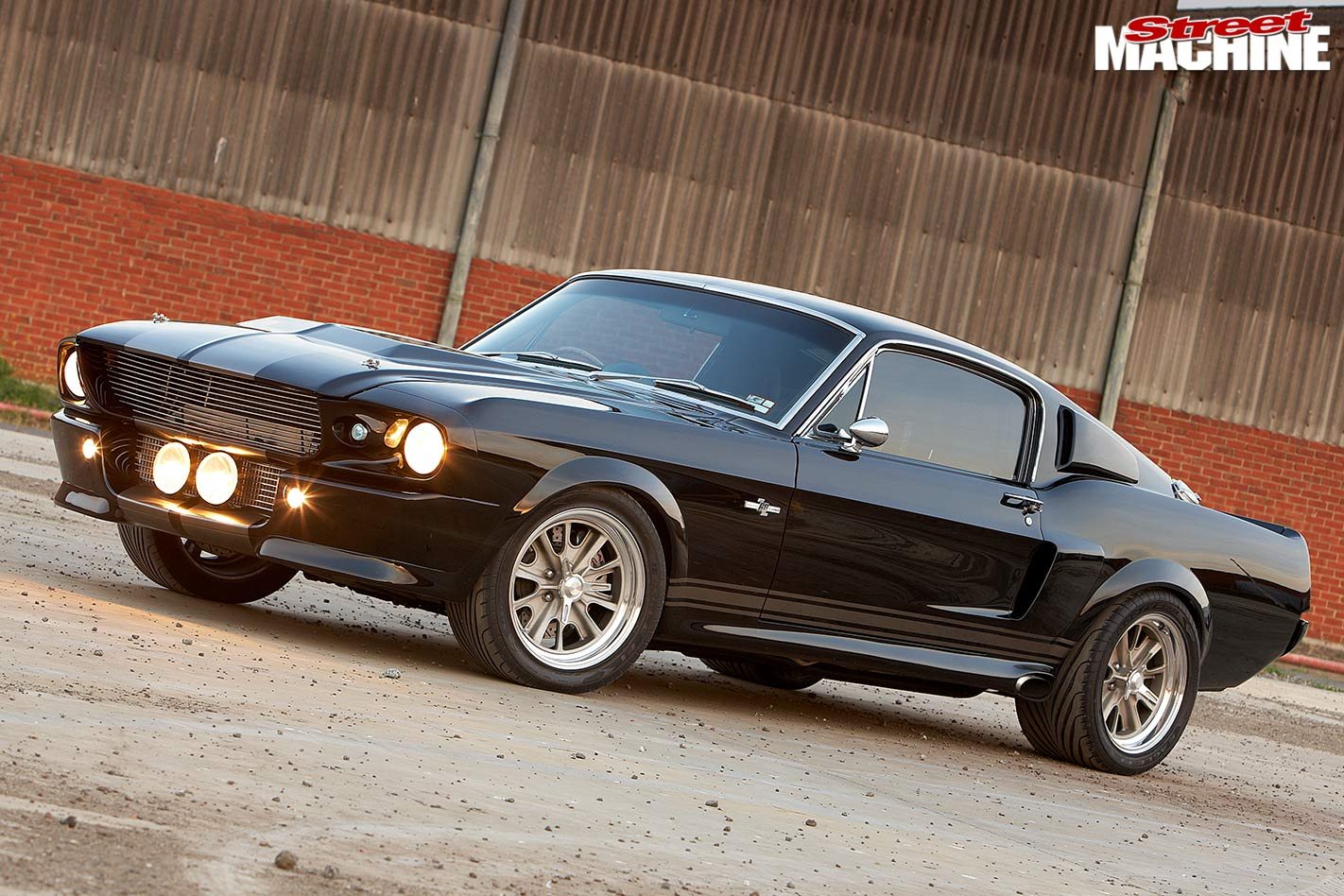 This was halfway there — it had the looks but power and performance were severely lacking. More on that later. Paul — no last name, thanks — turned up this primo classic Mustang in the US.

“A friend moved to California. I had him looking for anything hot and he stumbled across this.”

As Mustangs go, you couldn’t ask for more. The car was brand new from tip to tail and full of the best bits — Tremec five-speed, big brakes, rack and pinion steering, adjustable coil-overs, the lot. It looked awesome, sounded like a beast and was even right-hand drive, which meant Paul picked it up for a good price because right-hookers have limited appeal in the US marketplace. 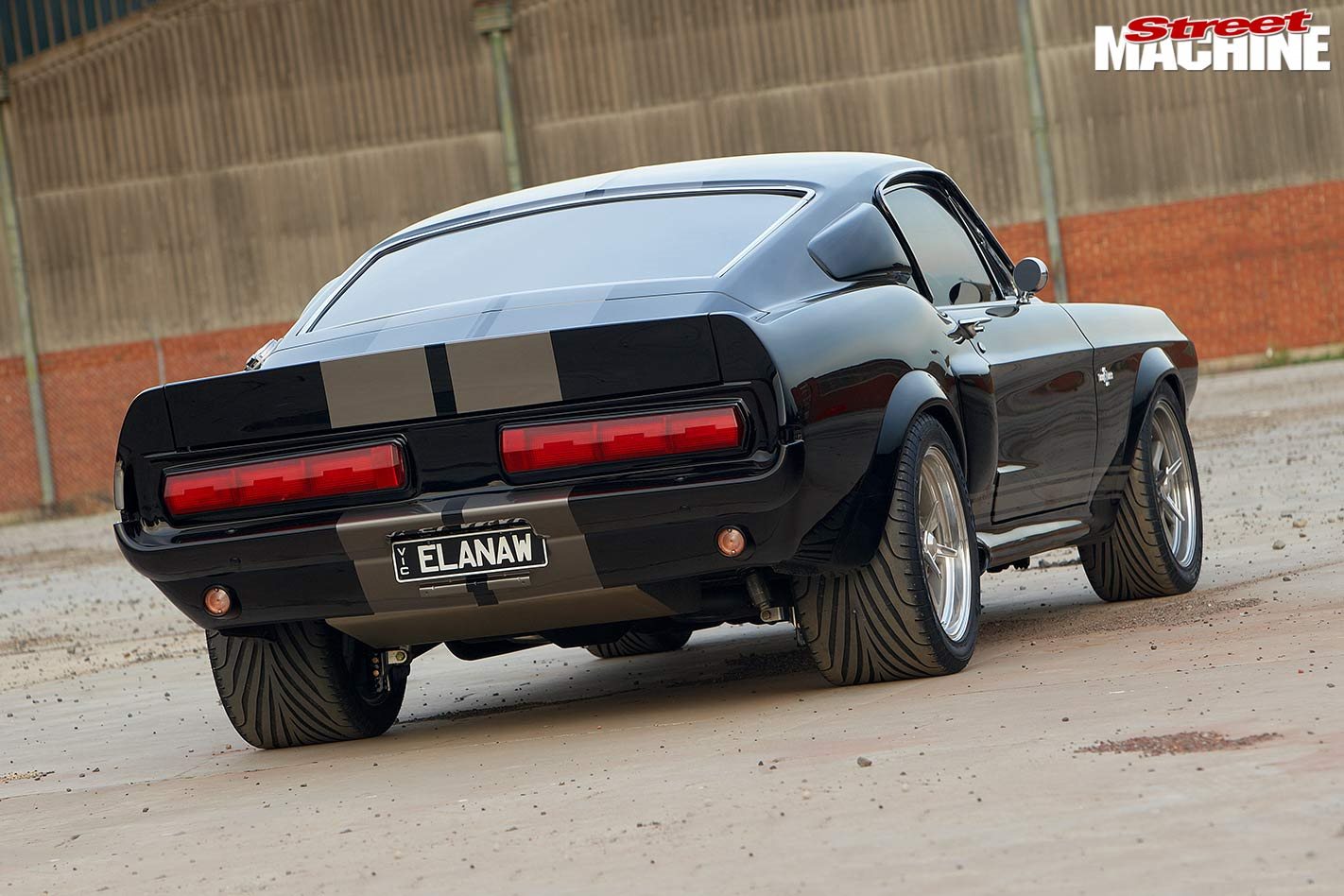 Now it’s all sorted, the blown & intercooled 434ci Windsor pumps 634rwhp on pump fuel. It’s about as subtle as a sledgehammer to the balls

“I think they started to build it for someone in England,” he says. “Then they ran out of dough or weren’t getting paid, and that’s when I got on to it. I’m not really into matching numbers cars and stuff like that — I wanted something old, but new.”

Fans of the Gone In 60 Seconds remake will have spotted that this is another Eleanor replica. To be honest there have been a few around. But Paul’s Mustang isn’t any old replica — it’s one of just a few authorised replicas signed off by Denice Halicki, widow of wildman HB Halicki, creator of the original Gone In 60 Seconds film. 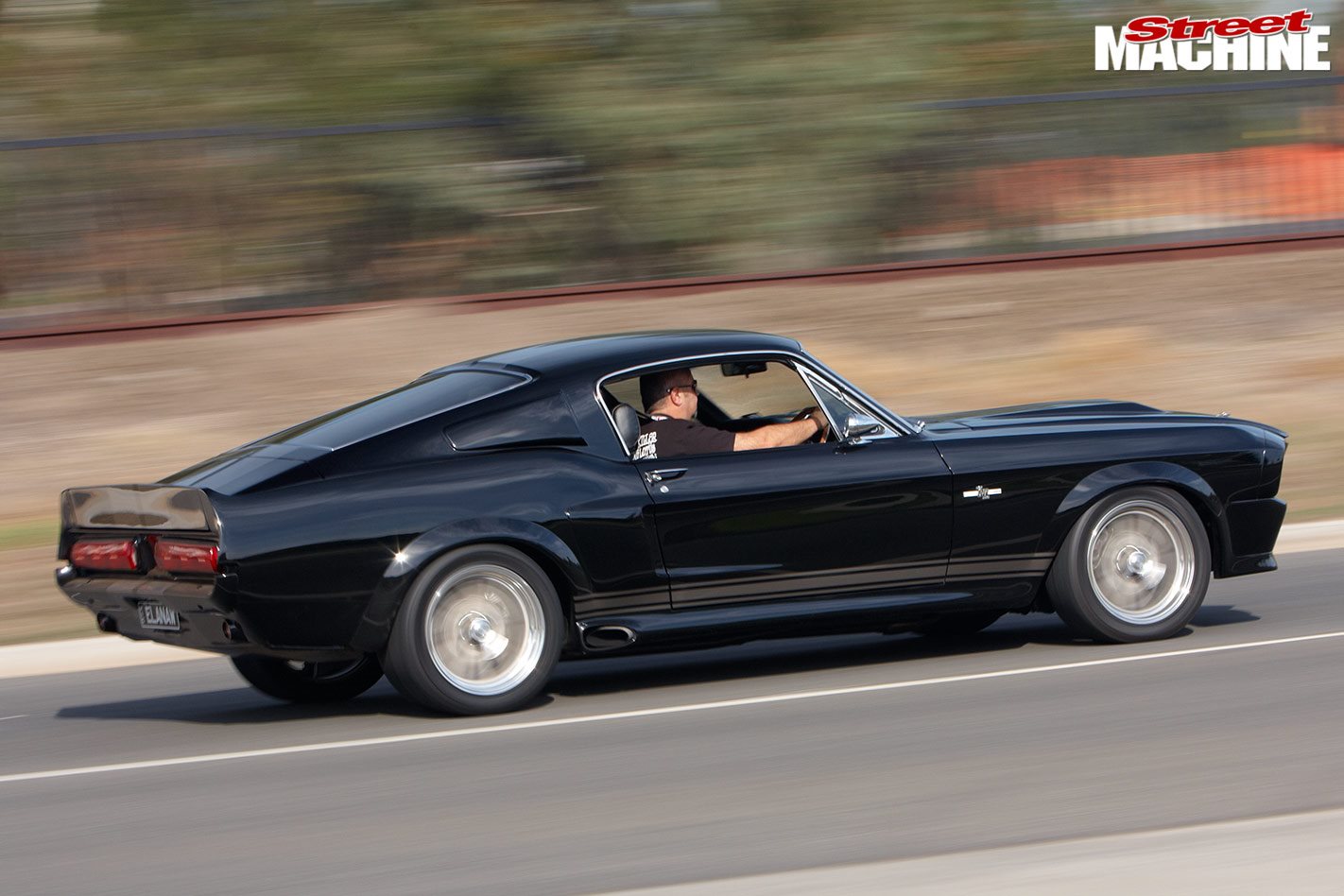 Built by just one company, Classic Recreations, these replicas are available in two performance levels: the 535hp everyday version and the premium 750hp model. With a 434-cube Windsor and an intercooled ProCharger, you can guess which version Paul’s is. However, it wasn’t all it was cracked up to be when it rolled out of the container. The body was beautiful, the paint was flawless and the engine sported impressive specs but the performance just wasn’t there.

“It sounded the part,” Paul says, “but it’d just pop and fart under acceleration.” So he delivered the car to Casey Automotive in Cranbourne. On the dyno there it wasn’t making any power.

“It was making about 300rwhp. It was only boosting about three or four pounds and the computer system was breaking down. It wasn’t a tuneable computer that you could hook to a laptop; it was pretty stiff really. I got a bit shafted there.

“The car was so loud you couldn’t tell what was going on. On the dyno we realised it wasn’t doing what it was supposed to. At about 3000rpm it would stumble — it was pretty terrible really.” 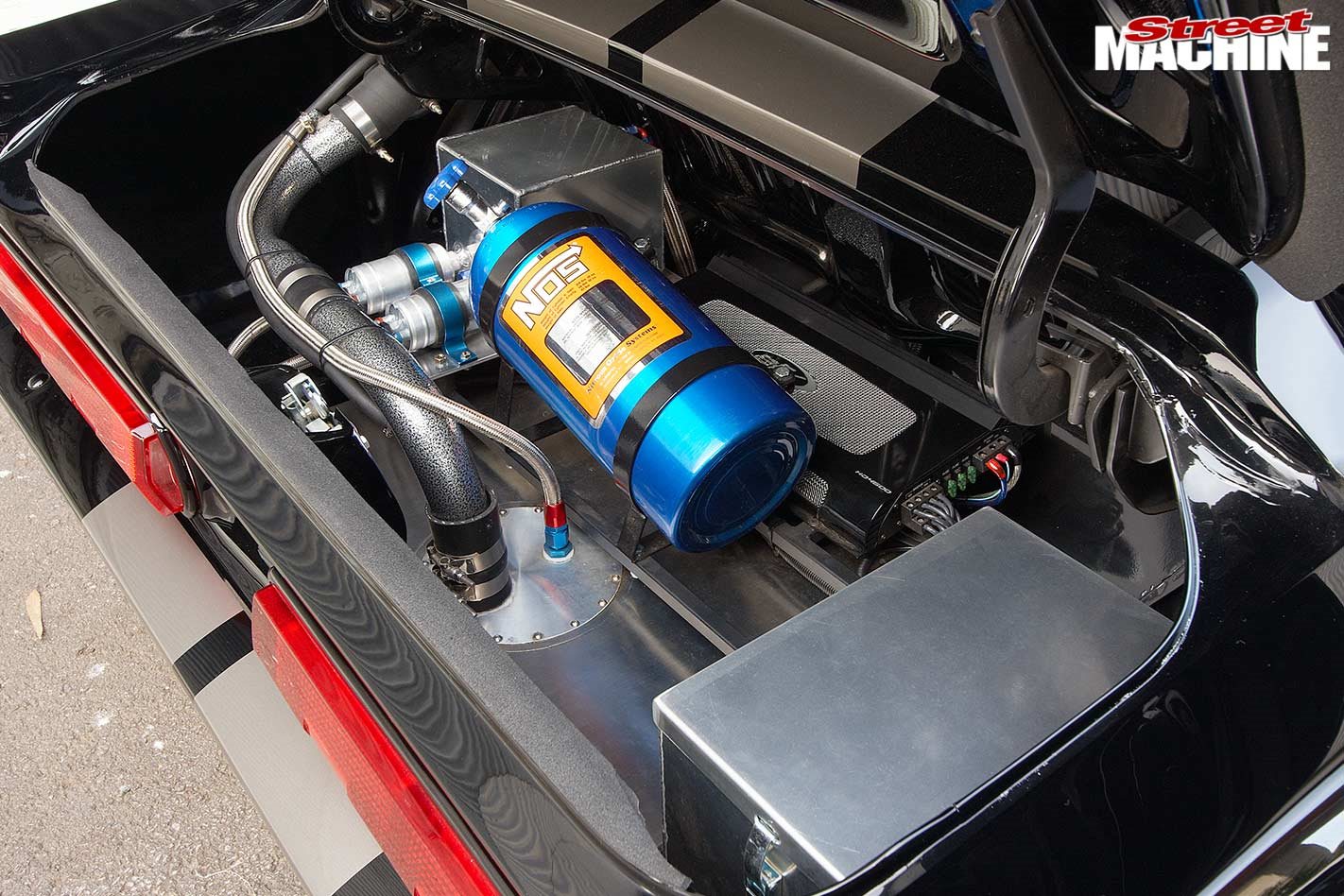 Nitrous isn’t hooked up and Paul’s not sure he’ll ever need it. Casey Automotive fitted the surge tank and twin Bosch pumps to keep the fuel flowing where it’s needed

The car had all the right parts — the guys pulled it down to check — but the control systems were letting it down. It was like having the world’s best orchestra but the conductor had different music.

“We changed the computer and it was 100 per cent better. We got it running smoothly after changing the ignition system.”

Aussie companies got the nod in both instances, with a Haltech ECU and ICE ignition used to correct the problems. Aussie ingenuity beats the top-shelf Yank equipment yet again!

The boys at Casey Automotive also changed the ribbed blower belt for something with a bit more bite. A Gilmer-style set-up means there’s no loss due to belt slip and the Muzzy’s engine is getting the full benefit of 14psi. 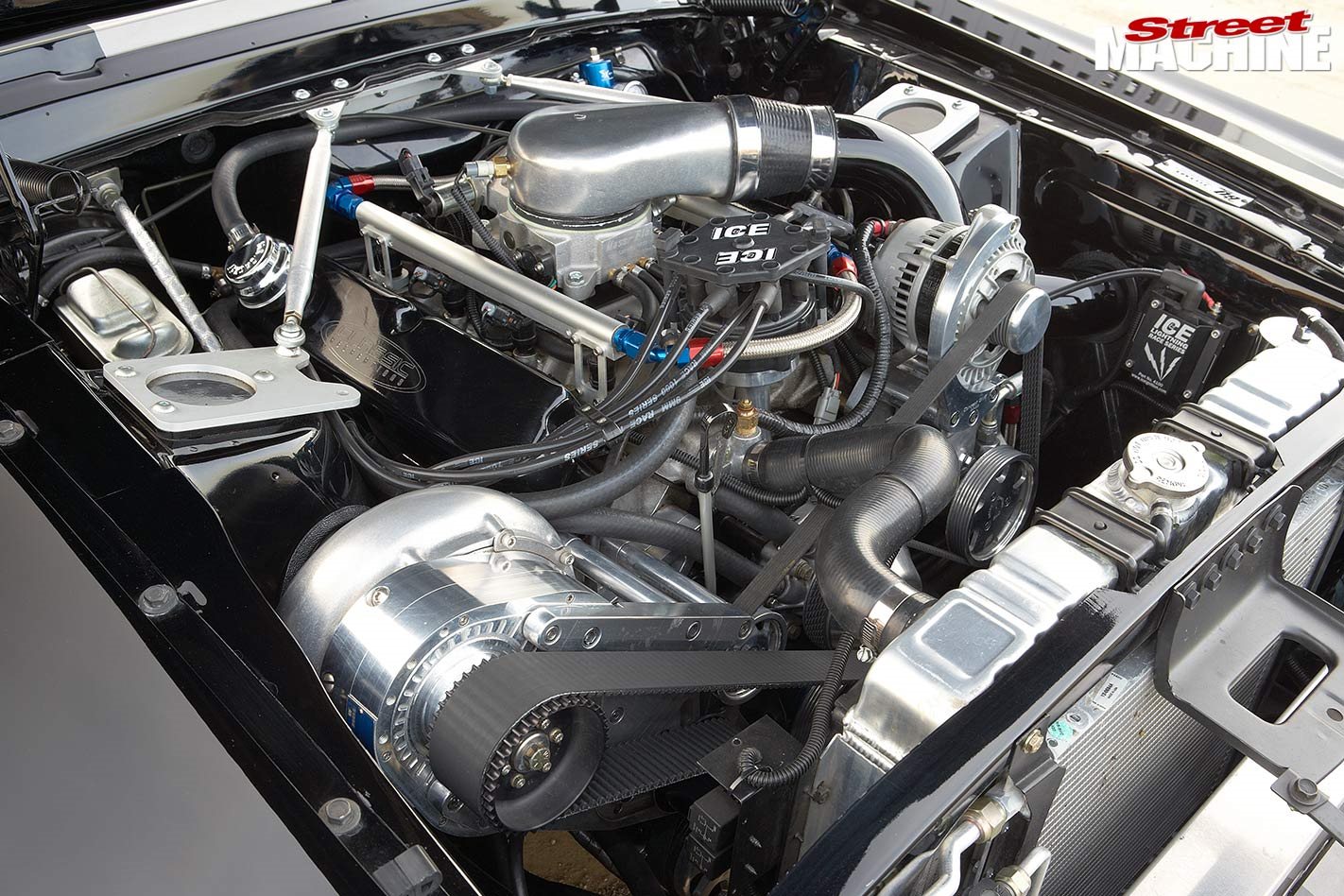 Additional changes to the fuel system and a few other tweaks have seen power climb to 634.5rwhp on premium unleaded.

Paul says they had close to 700rwhp with a more aggressive timing map and a few extra revs but the guys have detuned it for total reliability.

He doesn’t mind: “It’s pretty radical if you get on it. It’s awesome now. It’s good to have it in the garage, start it when I want to start it and go for a drive. I use it at least once a week; I’ve put 4000 miles on it in three months.”

Some of Paul’s other toys are starting to feel neglected — like his Ferrari 599 for example.

“To be honest,” he says, “in the past I’ve been more into exotic sports cars, so I wanted something different. I’ve had a twin-turbo Porsche and a Ferrari 430 and now I’ve updated to the 599, and that’s just an absolute supercar. It can make a gumby of a driver into a supercar driver with all its trickery. 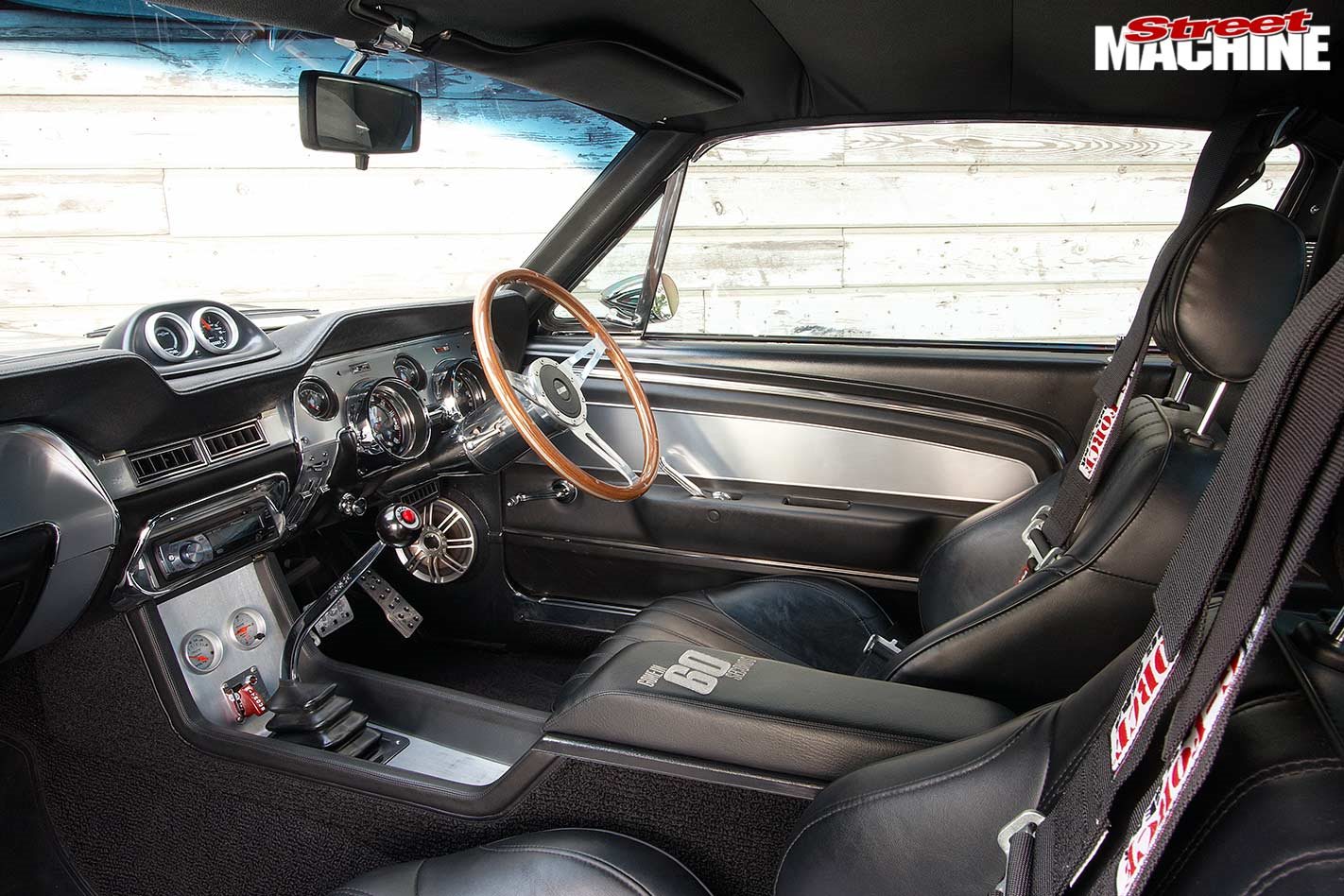 It’s just like the ’67 GT 500 in the remake, including the nitrous-arming switch and ‘Go-Baby-Go’ button on the Hurst shifter. Gauges and console lid feature Gone In 60 Seconds logo

“You spend big money on those cars and you lose so much when you sell them. I thought: ‘I’m going to buy what I’ve always wanted — a muscle car.’ It’s timeless, it looks better with age.

“What I love about the Mustang is it’s just raw. You’ve got to be careful, and you’ve got to have a lot of respect for the throttle. I love it.

“I think I’ve done about 200km in the Ferrari since I’ve had the Eleanor; all I’ve driven is the Eleanor. It gets so much attention, it’s unbelievable. You take it out and people are just in awe. It really attracts a lot of people from all over, young and old.

“When you’re in the Ferrari, a lot of people look at you like they’re thinking: ‘Look at this stuck-up prick’. But when they see the Eleanor, they all show great appreciation.” 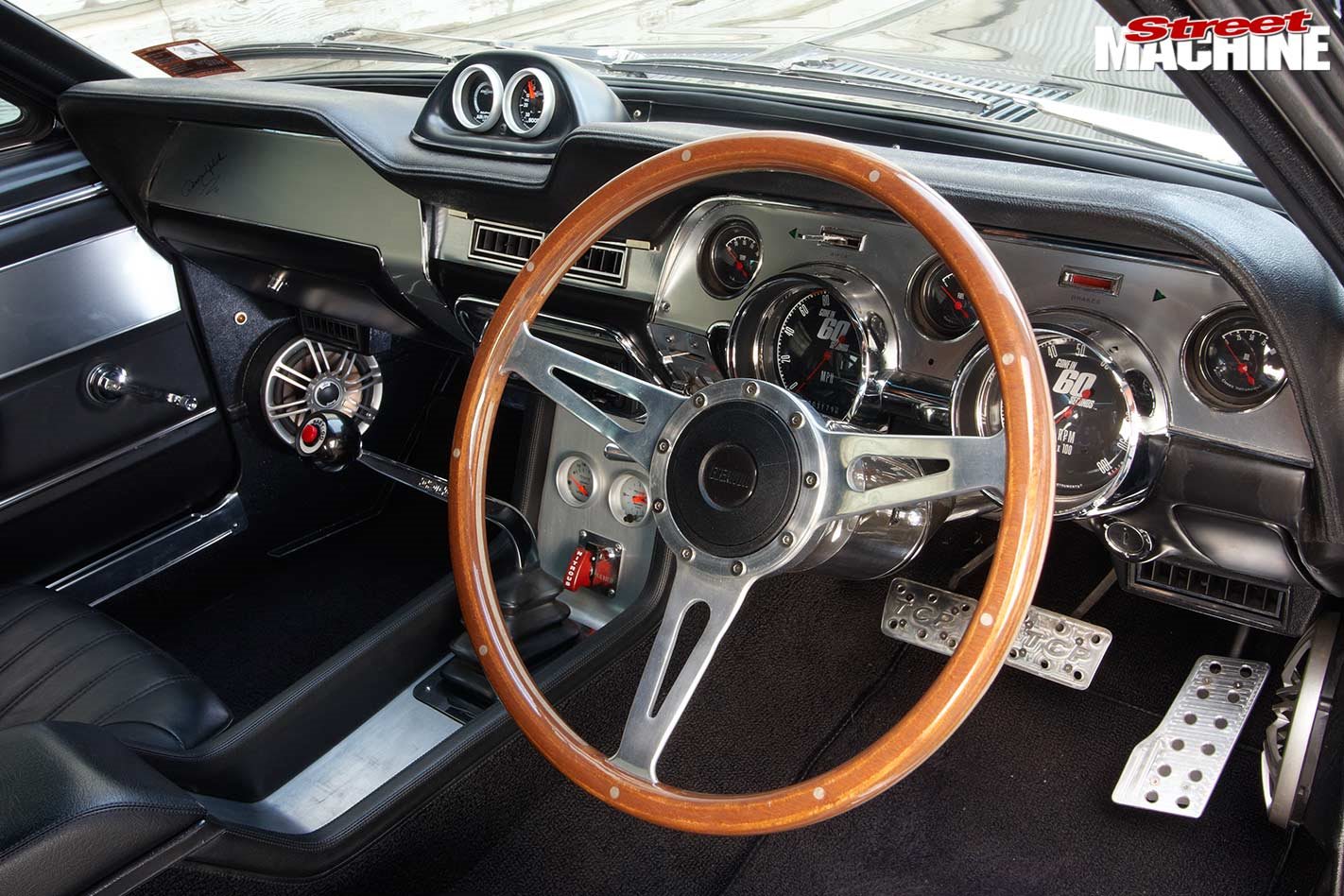 WHO’D have thought movie car replicas would cause a stir?

She signed an agreement with Disney and producer Jerry Bruckheimer for the 2000 remake, starring Nicolas Cage and Angelina Jolie. Where the original movie used a ’73 Mach 1, the remake featured a 1967 Shelby GT500 as Eleanor. And that’s where the trouble starts.

The remake’s Eleanor gained a cult following and car builders saw a chance to make a buck, so several companies starting making replicas and parts, including a deal between Carroll Shelby and the now bankrupt Unique Performance.

They built replicas until they were successfully sued by Denice for copyright breach after a three-year battle.