Blue Meanie tributes are a dime a dozen, but here's one that's done right

LIKE many other petrolheads, it started young for Peter Kulakovski. “I’ve purchased magazines like Street Machine since I was a kid,” he says. “I used to look at the pictures and read the articles when I was in high school. I was inspired to have a tough car of my own some day. Since then, I’ve worked hard and now I’m fortunate enough to be in a position to fulfil my dream of owning these cars.”

If you’re going to build a blown Brocky tribute, you do it right. The Formula Blue paintwork on Peter’s VK is flawless, as is the body. Part of the reason the body is so clean is that the car had one previous owner and only 70,000km on the clock

In a sea of blue VKs, Peter’s blown Brock tribute stands out like few before it. Four years in the build, the level of detail and the quality of gear in the car is second-to-none. “I purchased it off an elderly lady,” Peter says. “It was a factory Holden VK Berlina V8 that had 70,000km on it. The car never had a bump or bruise, so it was the perfect base to start with.”

Peter originally commissioned Nathan Allen from Elite Fabrications to take on the build. Many readers would remember Nathan from his epic burnout displays in his CMEFRY Holden VK and KE10 Corolla. Unfortunately, Nathan passed away in November of 2015. “It was very sad; I always got along great with Nathan and he was a fantastic tradesman,” Peter says.

Peter stored the car in his garage for a year or so, waiting until the time was right to continue the build. Then a friend suggested he get in contact with Paul from OC Motorsports, so that’s just what he did.

“Nathan did a great job smoothing out the engine bay and doing the tubs,” Peter says. “Paul from OC Motorsports took on the job of sorting the car from there on.”

It wasn’t long before the nine-inch was in, as well as the suspension and Wilwood brakes, and while Paul was working his magic, Damian and Mick from BG Engines were putting together a very serious engine package.

“I spoke to Damian and Mick and told them what I wanted to achieve and they made recommendations,” Peter says. So it was out with the black motor and in with a Lunati 408ci stroker crank in an LQ9 cast-iron GM block with LS3 heads. To make sure the LQ9 motor didn’t have any trouble blazing the rear tyres, an 8/71 billet Blower Shop blower was fitted up, along with a Joe Blo EFI kit. In terms of engine accessories, LS1 coilpacks feed MSD leads, and an EMS EM80 ECU sits as the brains of the operation. A custom PWR radiator with twin pusher fans sorts the cooling.

The Showwheels 20x8 fronts and 20x12 rears keep the wild theme going, giving all that polished metal in the engine bay something to blend with. Peter says that despite the rear tyres measuring 345mm wide, breaking traction in top gear isn’t an issue

A trusty Turbo 400 was chosen for the task of sending power to the rear treads. The gearbox has been fully manualised, and runs a TCE torque converter. The nine-inch diff is also the business, using a Strange diff centre, Truetrac, 35-spline axles, 5/8-inch wheel studs, and runs a 3.5 gear ratio.

Gone is this original Berlina’s 5.0L Holden V8; in its place is a 408ci stroker LQ9 cast-iron small-block. At the time of writing, Peter’s VK was in getting a 15psi pulley upgrade as well as the option to run E85 on an E-Flex tune and says it should be enough to hit the 1000hp mark

Underneath, Peter chose to go with Pedders coil-overs up front, and Strange single adjustable items in the rear. The rear end is a four-link set-up, with chassis connectors and adjustable Z bars.

While the list of parts is impressive, the engine bay is probably the most eye-catching part of the car. The smooth, glossy paint and generous smattering of billet goodies make the VK’s bay a real standout.

That engine bay, and the entire shell in fact, was painted by Peter’s friend Basser from 2SUS Custom Resprays. “Basser did a top job on the paintwork,” he enthuses. “You would think this car has just rolled off the showroom floor. In and out it’s flawless.” The trim is thanks to Dave from Top End Interiors. Everything you see inside the car has been retrimmed or refreshed. Factory Scheel front seats were sourced and given the SS Group A treatment, as were the door trims and rear seat. It’s fair to say most wouldn’t spot the difference between the trim in Peter’s VK and a set out of a true-blue Brocky.

The last piece of the puzzle for Peter was the wheels. Tucked nicely under the guards is a set of Showwheels measuring 20x8 at the front and 20x12 out back, with both ends wearing sticky Pirelli rubber. If you peek through the spokes you’ll also notice a very serious set of Wilwood brakes front and rear. There’s also a Wilwood master cylinder hiding under the dash.

On a run-in tune, the car made 600hp at the rear wheels on 98 pump fuel. Peter tells us it’s a thrill to drive. “The car is currently over at JC Motorsport in Botany with Johnny,” he says. “He’s put a 15psi pulley on it and he’s about to switch the car to run an E85 E-Flex tune so we can use either E85 or 98. He’s pretty confident that we’ll see up to 1000hp at the rear treads.”

Those numbers will likely send this blown Blue Meanie tribute into eight-second territory. “It’ll be off its head,” Peter laughs. “I drove it at 600hp on 98 pump fuel, an in top gear it just blazes the tyres.”

Talking of what drove him to build a VK, Peter says: “Growing up, my best mates were revheads and we always discussed the cars we were going to build when we got older and in a position to do so. The car I wanted to build was a VK Brocky. When I was growing up my brother Michael had a tough VL Group A. My cousin Tony had a tough LH Torana and his best mate Marra had a mint sky-blue VK that was mini-tubbed. It had a 383ci stroker from memory. I was in love with his car. When I finished my VK I sent him photos and said: ‘You were the inspiration for this car.’ He loves it.”

Peter has aspirations to build a “very tough” XY Falcon next, as well as finish his tubbed 20B turbo RX-4 coupe that’s currently in the build with Steve at SDR Motorsport.

As it stands, Peter’s car collection is certainly impressive. “I’ve got a lot of cars and I’m very OCD about the way they’re put together and kept,” he says. “All my cars are immaculate, as is the shed. They have to be covered up at all times and there can’t be a single fleck of dust anywhere.”

Peter and his brother own a Sydneybased building company that builds around 350 homes a year. He tells us that it’s taken many, many years to get his business to where it is today, and that hard work has enabled him to fulfil his dreams of having a standout collection of cars. Hats off to you, sir. 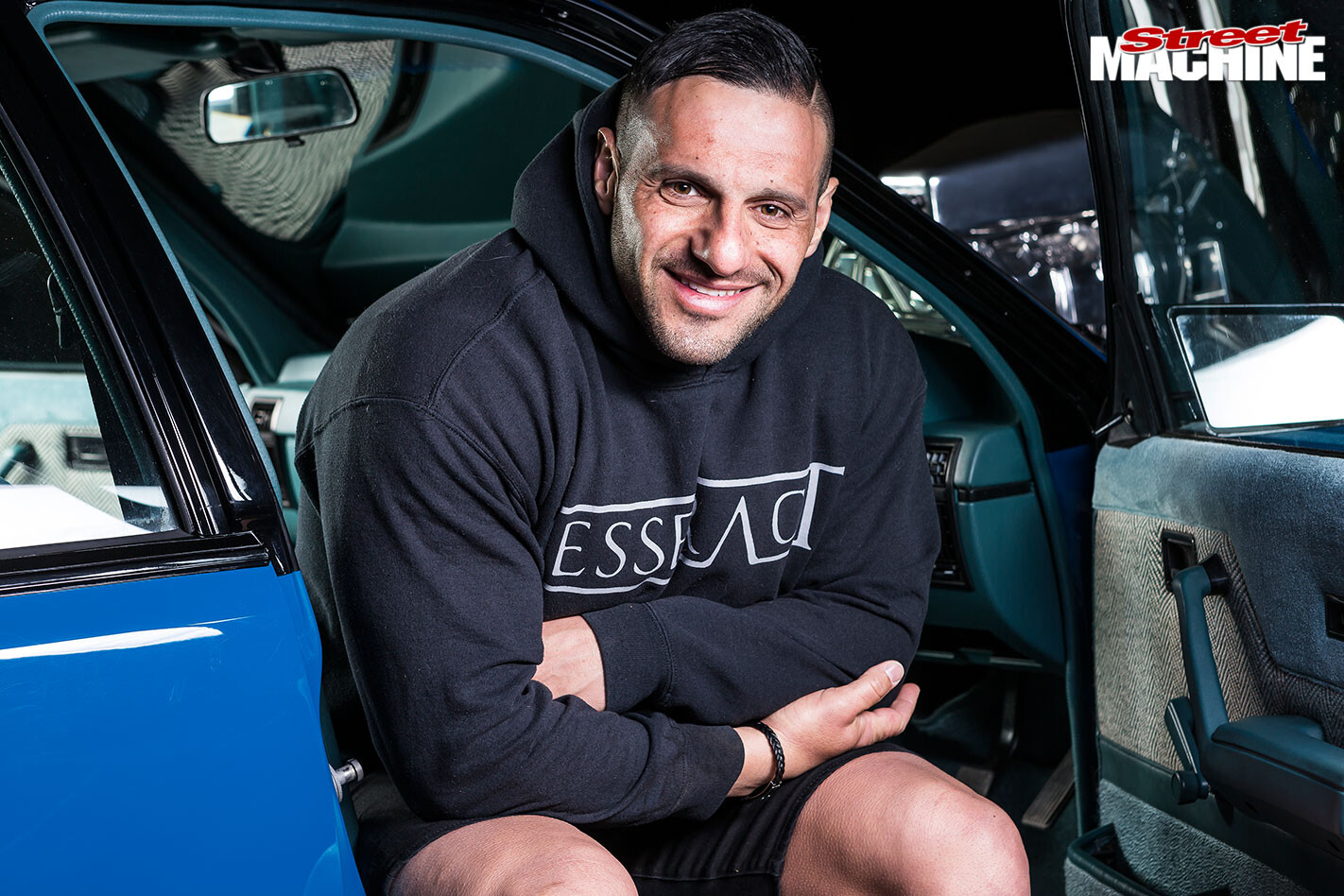