What happens when Group C racer and Pro Street meet!

MIXING Pro Street and Bathurst styling sounds like a recipe for disaster but Alistair Reay’s LX hatch is proof that the combination can be tougher than hell and look right too. A9X flares are beaut for covering big rubber, so why not tub the rear and stuff some really fat Hoosiers under there? Even the drag-style wing is reminiscent of the original A9X bobtail spoiler. You know it makes sense! 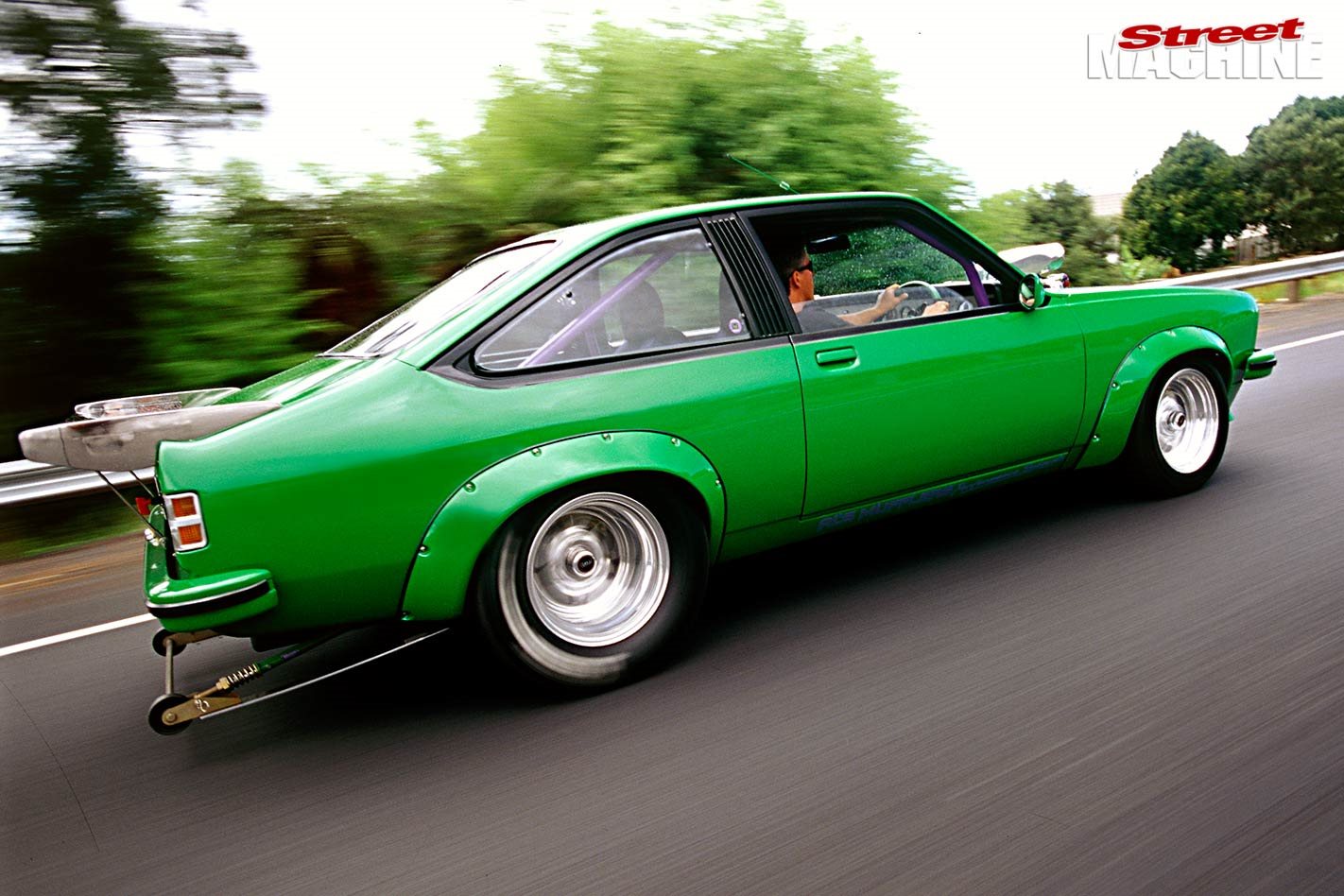 Alistair hails from Auckland and once owned a mint condition, numbers matching, A9X. He always thought it would look better done in the Pro Street style but somehow he couldn’t bring himself to debase the real thing. So the A9X was sold — partly to finance a house purchase — and Alistair went on the hunt for a replacement shell.

What he found was a beauty. A brand new — never been used — LX hatch shell, apparently a spare for Jim Richards back in the day. The shell was so good that the benchmark for the build was raised and Alistair was on his way to creating a highly detailed, show-quality car. A trip to Summernats confirmed the Pro Street concept as A Good Idea and the build was on. 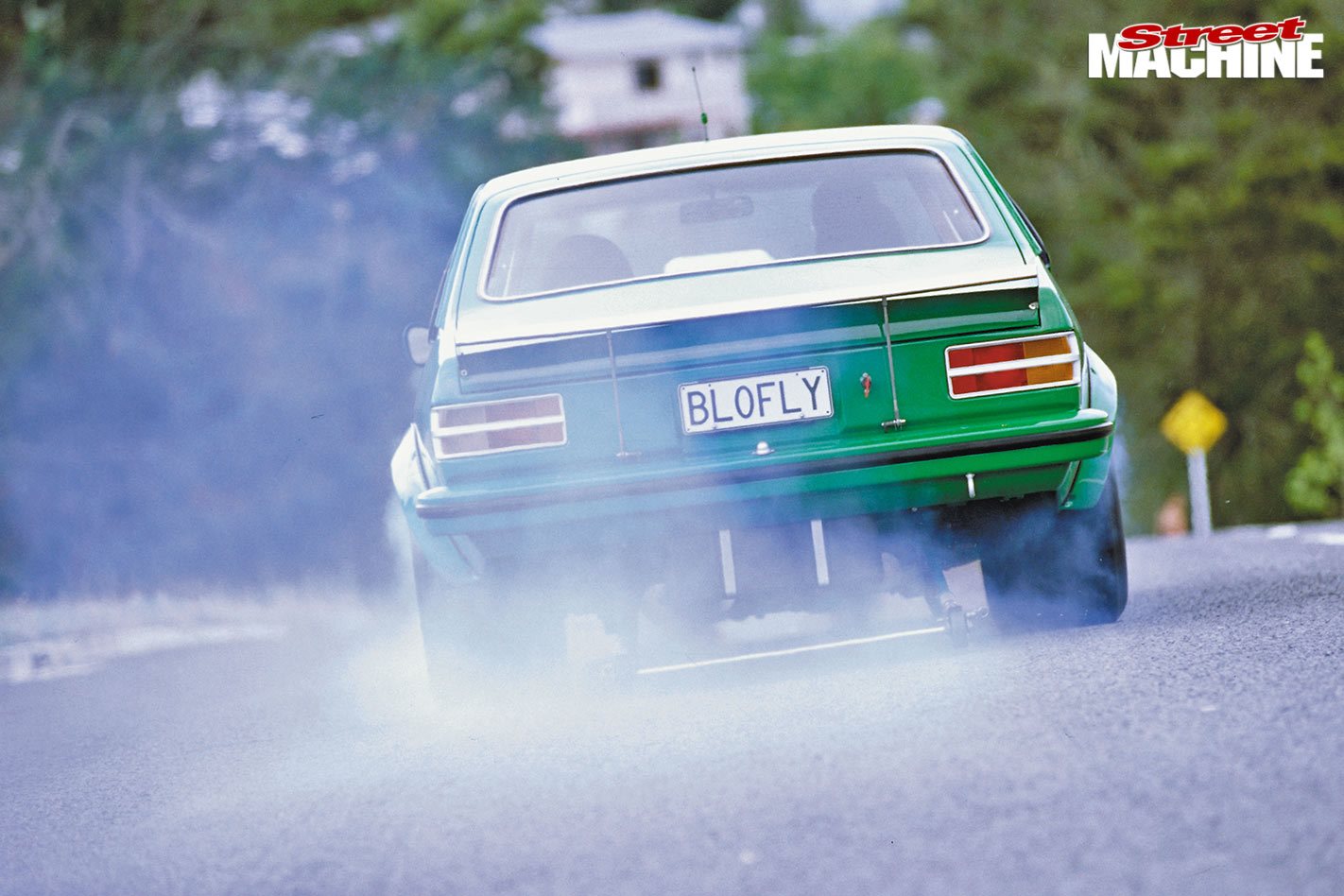 Good buddy Craig Date got to work seam-welding the shell and helping Alistair mini-tub the rear end. Subframe connectors were added, the rear suspension was boxed and a narrowed nine-inch fitted out back. HQ-style drop spindles allowed Alistair to fit some decently-sized brakes, as well as getting the nose of the car right down for its righteous stance.

Up front, Alistair plumped for a tough 350 Chev, set back deep in the engine bay. Reamed to 355ci, the mouse motor was built to take boost, with forged pistons, a blower cam and a pair of Dart II heads. Al’s Blower Drives prepared a 6/71 blower, resting on a Weiand manifold and topped by a 930cfm Demon carby. This little lot is topped by a Garlits SC500 Street Catcher scoop (read more below). The result? A tough but streetable small-block that looks like a 1000hp stonker, but can handle the late night milk run with all the aplomb of your mum’s Laser! 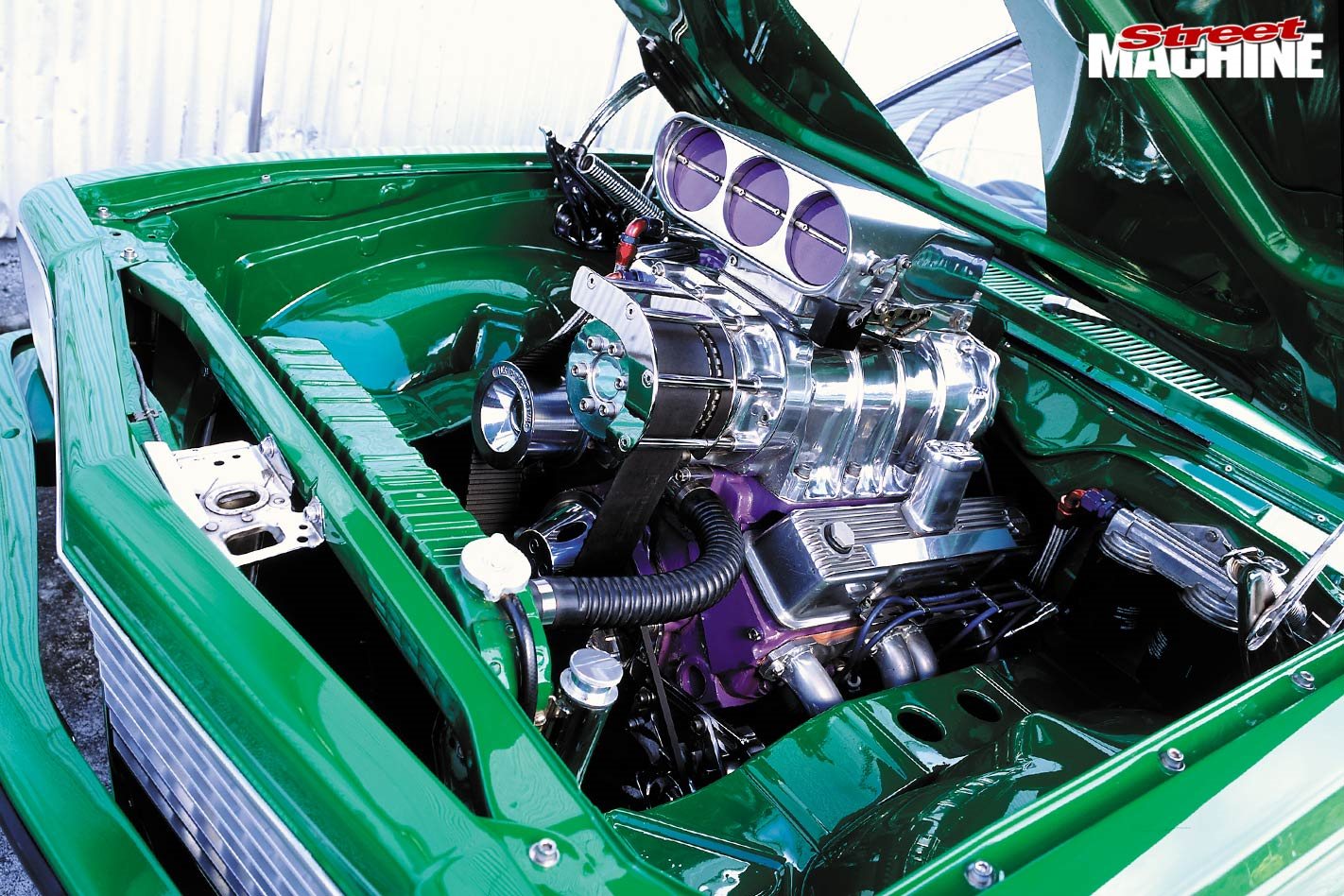 Gear changing duties take their inspiration from the Bathurst side of this car’s DNA — a Super T10 four-speed and Mr Gasket vertical gate shifter — making for a memorable driving experience!

Bodywise, the Torana was left largely as the factory intended, save for subtly reshaping the rear flares, shaving the door locks and fitting an external battery cut-off. Prep work was performed by Alistair and his mates Cory Brown and Jason Hansen, with the latter applying the custom mix paint. Engine bay detailing is one of the highlights, with all the excess factory crap deleted, the battery banished to the rear and some judicious use of braided line and a lot of polish. Final assembly included the use of polished stainless or chromed fasteners for the stainless steel rear wing. 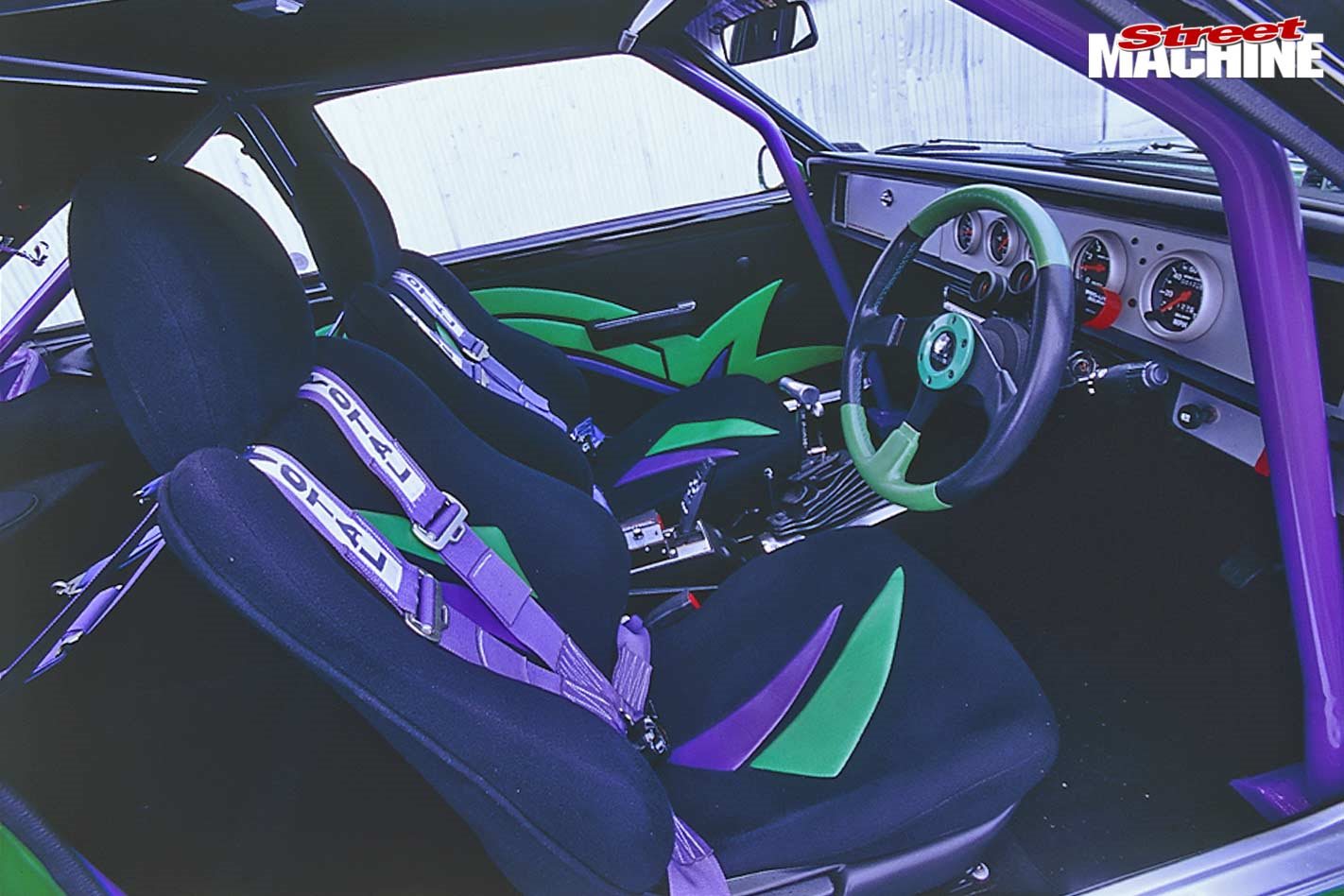 After six and a half years of hard toil, Alistair says it was the testing station which provided some headaches getting the car on the road. While the brand new body had its advantages in the build-up, trying to explain that it was a brand new 1977 body with no owners, no previous registration, mileage or body tags sure created some stress!

These difficulties were overcome and the hatch is now free to cruise the streets both as a living, throbbing reminder of New Zealand’s saloon car racing heritage and as one of the leaders of NZ’s burgeoning Pro Street scene. Beaut! 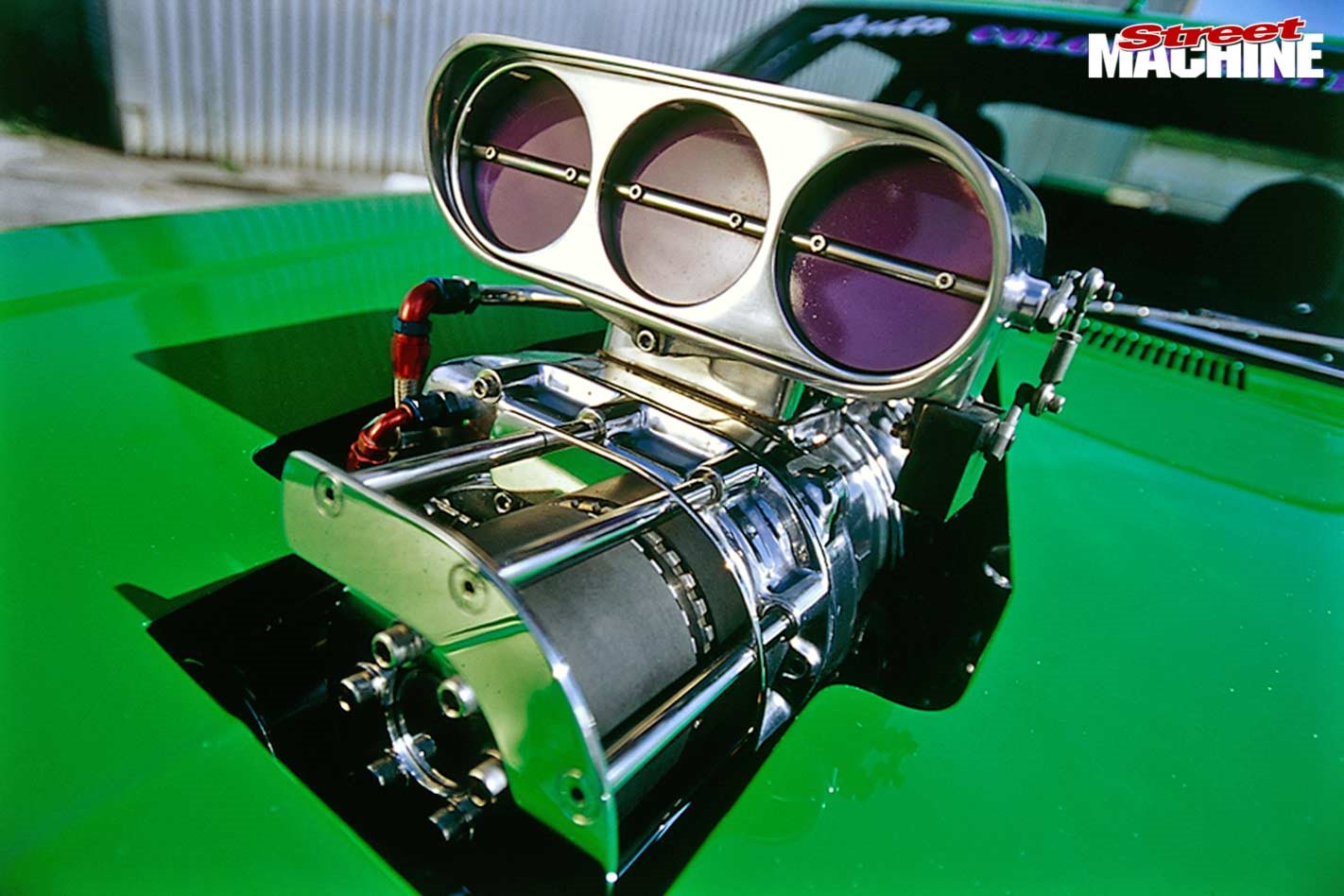 There's no doubt that an Enderle Birdcatcher or Bugcatcher injector hat is one of the toughest looks around but trying to live with one on the street is a recipe for pain. An excellent alternative is to convert such a set-up to EFI — or do as Alistair did and fit a Garlits SC500 Street Catcher. These little beauties are a bolt-on fit to any GMC-style 6/71 or 8/71 pump, with the scoop enclosing a single four-barrel carb and air filter. The butterflies work through a dummy barrel valve and linkage system.