ROBERT Zahabi is no stranger to creating custom cars. He’s built a number of show-winning vehicles that have appeared on magazine covers and his business, Kam Motor Trimming, was also responsible for the knockout white interior in Street Machine’s 2006 giveaway car, the Southern Comfort Cruiser. 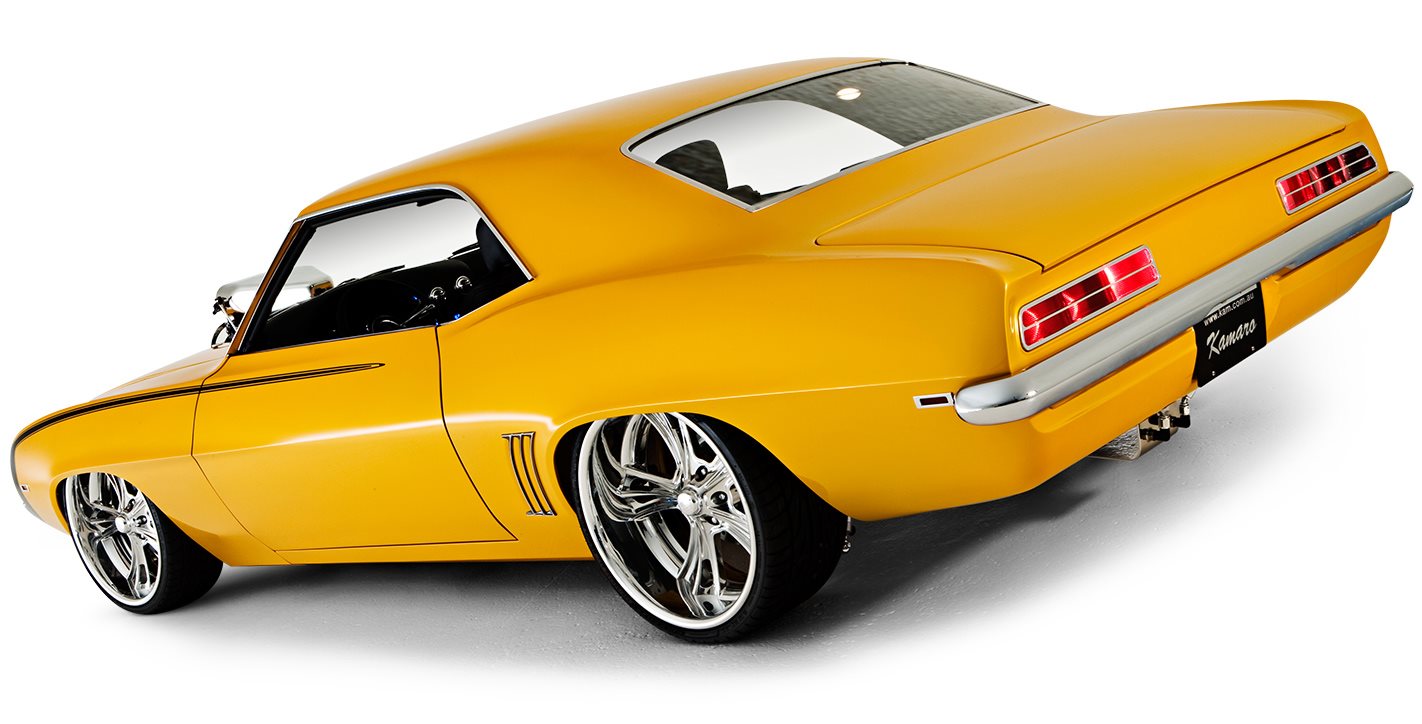 “Most of my previous cars were built to suit a particular market, so they could best promote the business,” Rob says. “And while it is still a promotional tool, this time around I wanted to build something that was just for myself.”

Opting for a ’69 Camaro was a no-brainer. “It had to be a proper muscle car,” he says. “And the ’69 is arguably the most iconic muscle car of them all.”

Video: Riding in the Rides by Kam Camaro at Summernats '16

Rob came up with a couple of computer-generated renderings of Kamaro, which he sent to Owen Webb at HOK who then concocted the combination of base and candy to match the colour

So he spent two years sourcing a decent RS SS shell from California. “This one was a little rough but at least it didn’t have the floors hanging out of it like most of the others.”

Rob and his good friend Shannon Burrow got stuck in and stripped the car down to transform it into ‘Kamaro’, the name Rob’s given to his dream Camaro. 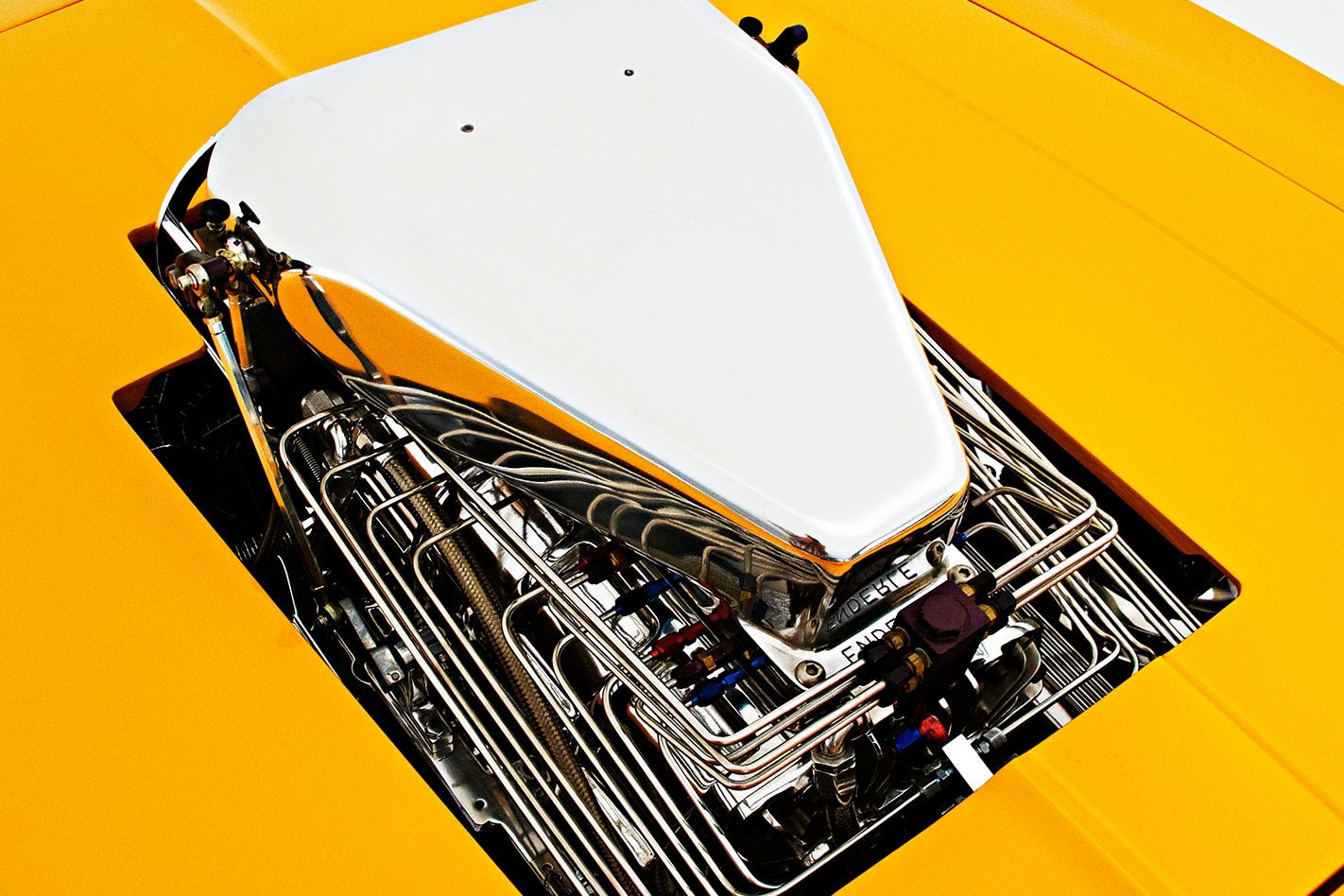 Rather than chopping, plating and facelifting the classic shape, he decided to keep the body and chassis almost stock. “I didn’t want the car to lose any of its heritage, otherwise it’d stop being a true muscle car and turn into nothing more than a shiny show pony,” he says.

Rob crafted virtually the entire car himself, including a solid year spent massaging the body into shape. Subtle mods include eliminating unwanted joins while shaving the doorhandles and mirrors. Under the filled and smoothed bonnet there’s a smoothed firewall and a custom filler panel over the radiator support. 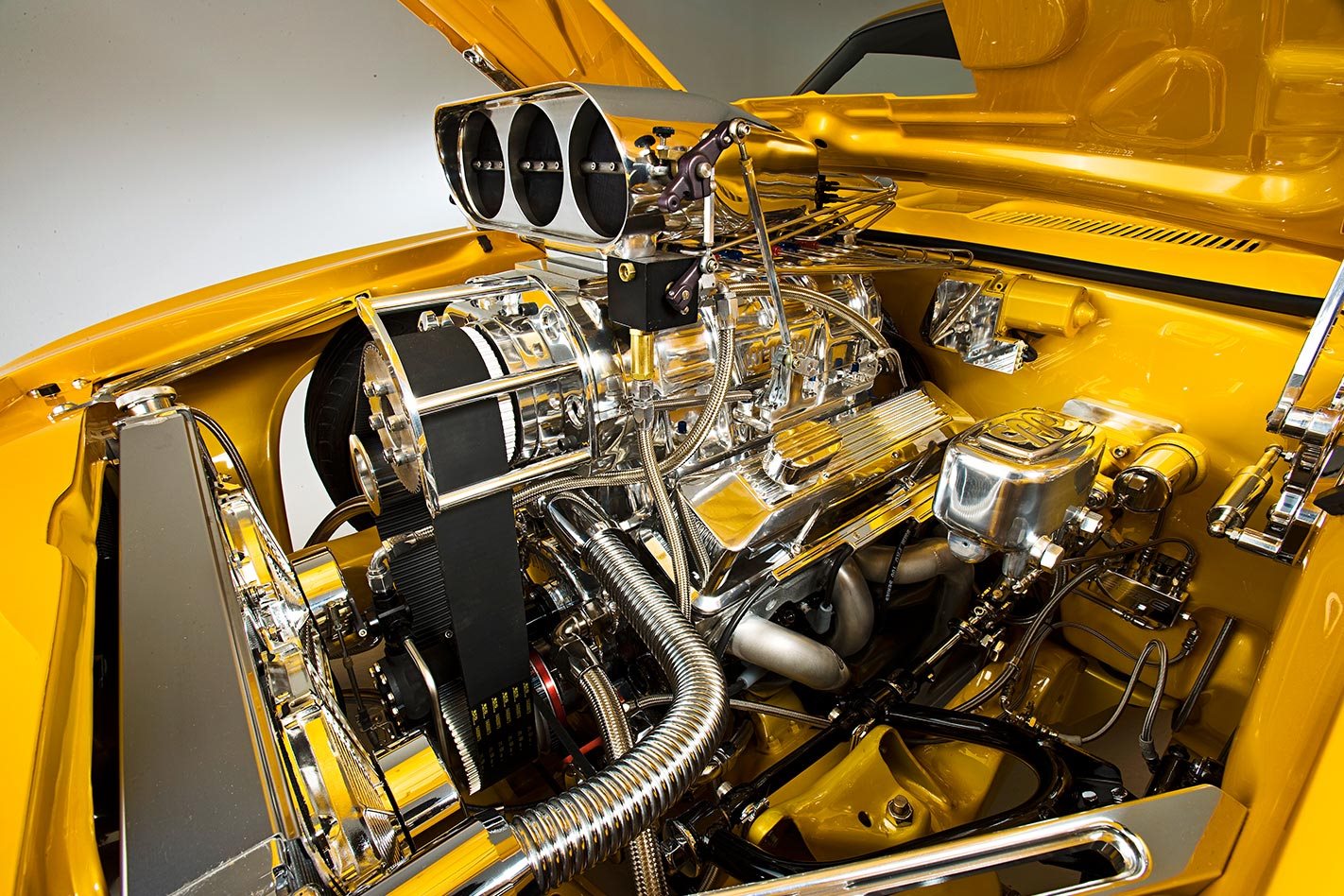 Although stock in shape, the chassis has been smoothed for a clean yet factory look. PE Customs applied HOK Sunrise Pearl to the silky smooth panels and painted on the hockey stripe, but for the chassis, undercarriage and driveline, Rob handled the gun.

But while Kamaro retains the classic lines on the outside, it’s a different ballgame inside. 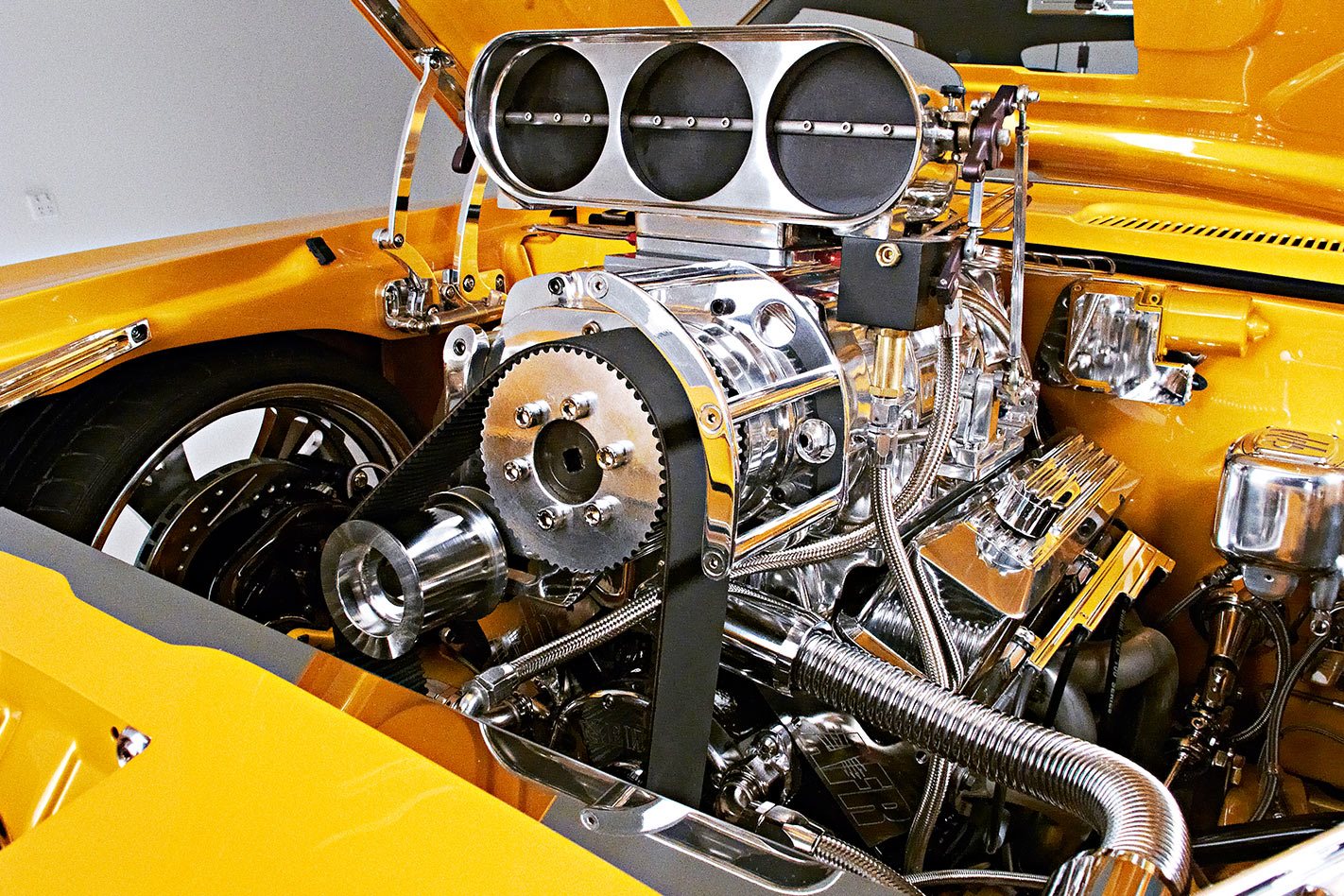 “I wanted it to look like a retro concept car. Totally modern, totally unique, yet retaining many of the ’69’s signature design elements.”

That includes the twin centre gauges and four console-mounted accessory gauges. To create the dash shape, Rob glued 40 bricks of florist foam together, carved that to shape then fibreglassed over it. A fibreglass guru suggested florist foam because the resin doesn’t eat it, as it does with normal foam.

For the trim colour, Rob suffered no doubts. 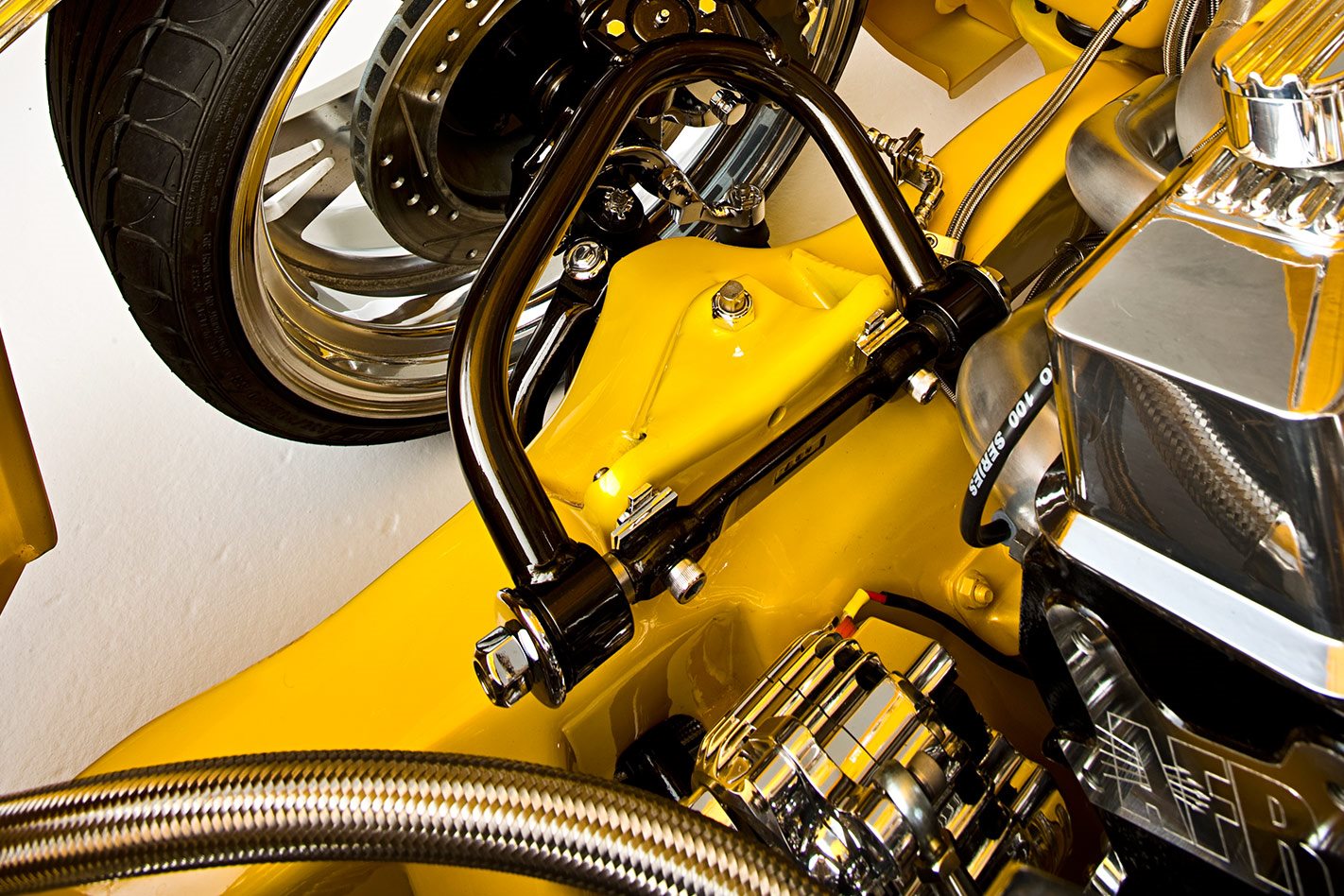 “I’d done so many cream, tan and beige interiors that I was sick to death of them. Besides, a muscle car needs a black interior.”

Black it is, using no less than 42 metres of leather!

Bringing a touch of colour, a split-level console was constructed from fibreglass and painted body colour. Flat inlays that mirror the shape and colour of the console were incorporated into the custom door trims. Check out the six billet buttons in each seat — the set of 24 cost Rob $600!

“They’re all individually CNC-machined, making them bloody expensive, but they give the interior the look I was after.” 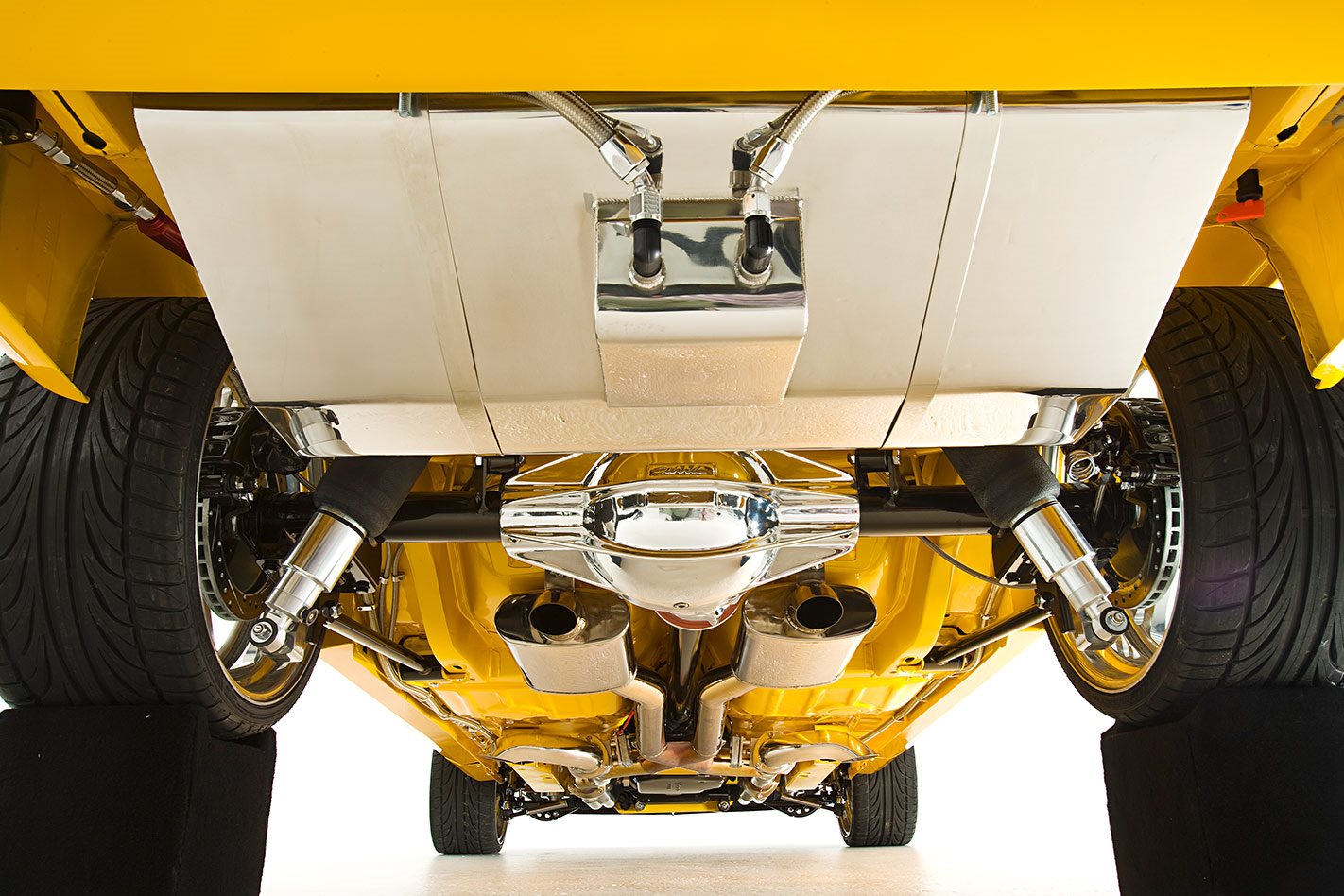 This thing’s loud, even through the twin 3.5in Magnaflow mufflers. But when Rob trips the cut-out switch and the hot gases exit through the side dump-pipes, it sounds like all hell has broken loose

On the floor there’s no carpet — “It’s all leather!” — though the snug-fitting panels are adorned with polished alloy strips to break things up.

There’s also a full Air Ride suspension system. Out back, Kamaro uses Air Ride’s triangulated four-link set-up (welded rather than bolted in for a more factory finish) coupled to Shockwave airbags. Up front, tubular upper and lower control arms are attached to dropped stub-axles and Shockwave ’bags, while the steering has been converted to power rack and pinion. 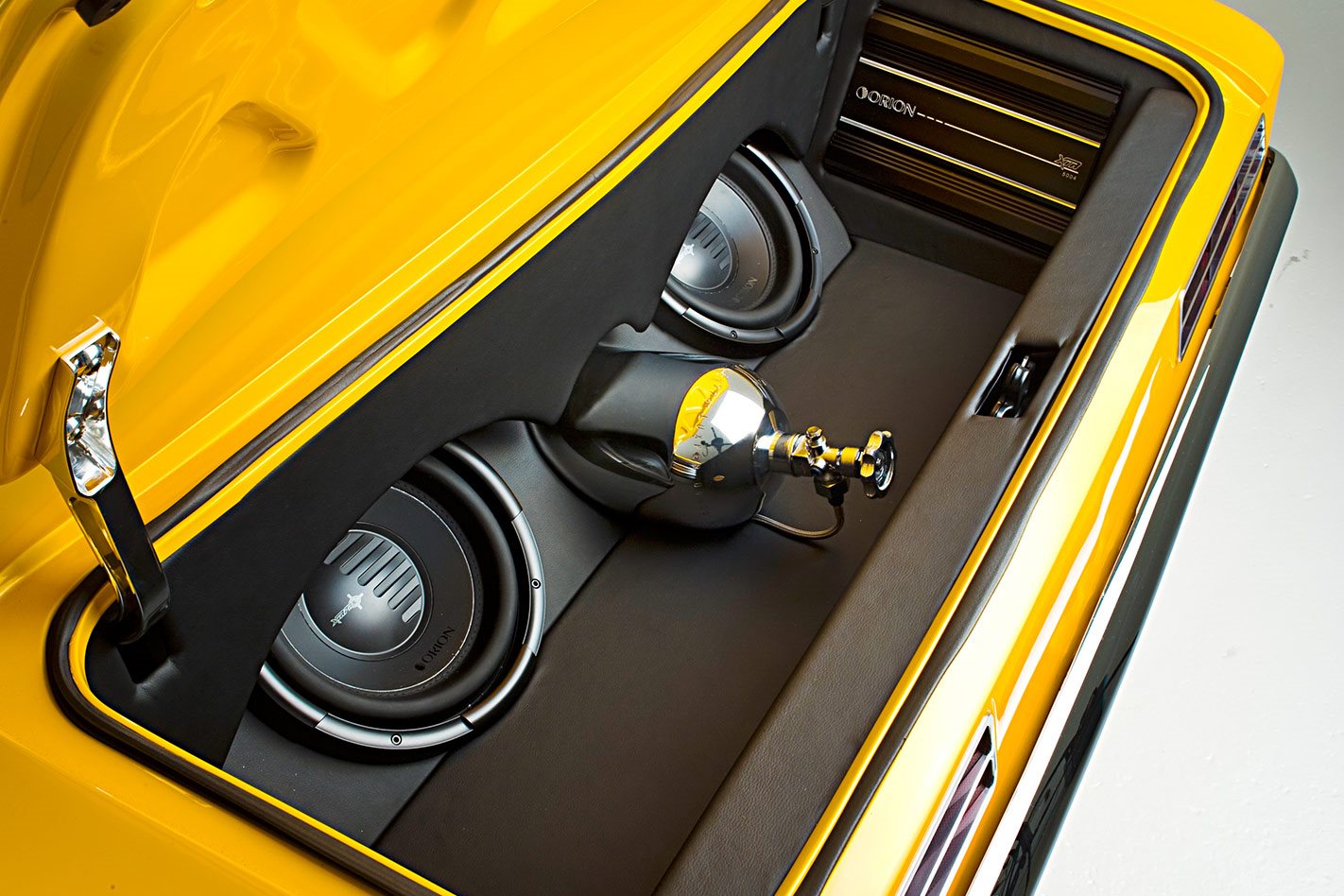 To haul things to a stop there are massive CPP brakes on each corner, with the calipers finished in business-like black.

The suspension set-up allows Kamaro to swallow 20x8.5s and 20x10s without tubbing or chopping into the car. Each Shockwave features 16-way adjustable damping, while Air Ride’s computerised controller provides 25 individual settings for the ’bags to get everything dialled in just right. Operation is via keychain remote or the dash-mounted control panel.

An arrow-straight body, gorgeous paint and sumptuous interior are all important aspects of any noteworthy streeter but it’s what’s under the hood that puts the muscle into a muscle car. It might be dressed in the finest billet accessories but this 400-cube small-block also has big kahunas. 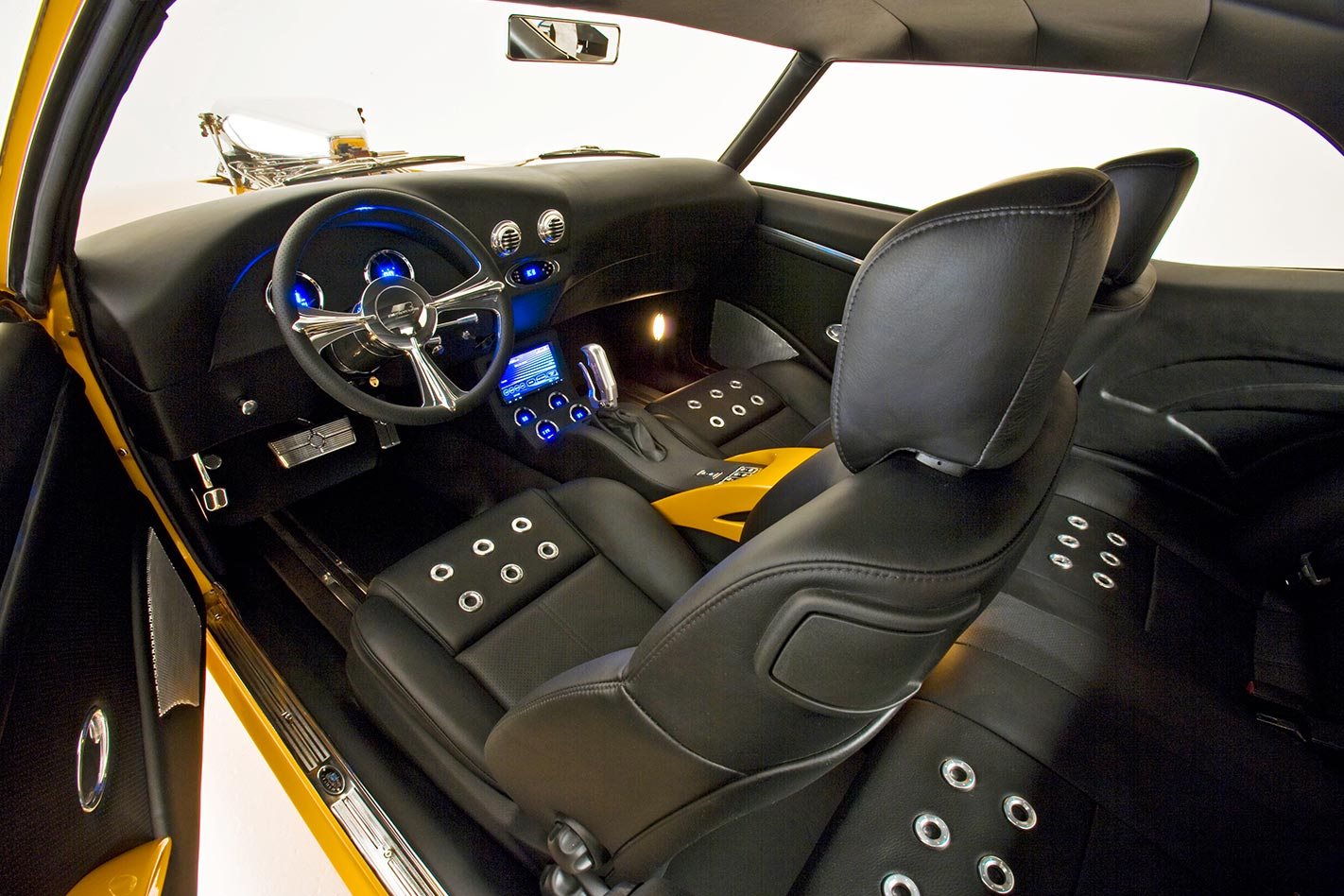 It takes quite a fuel system to feed such a beast so a Mallory 250gph electric pump sends the go-juice from the rear-mounted main tank to an eight-litre tank behind the grille. From there, a Hilborn 80A mechanical pump (driven off the front of the cam) takes over and feeds the eight hat-mounted injectors. 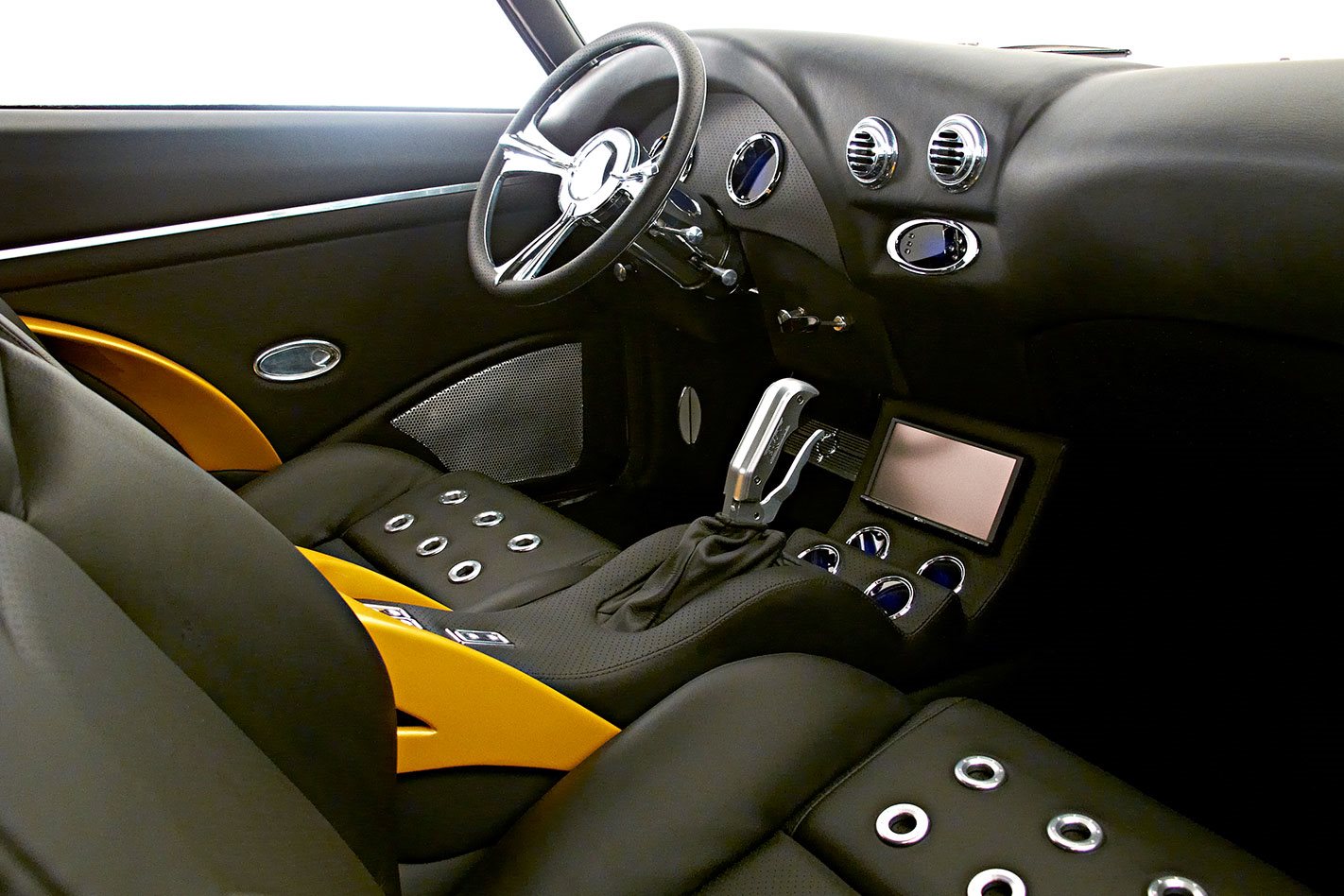 With the menacing mill in and ready to rumble, Rob flew Jake up to the Gold Coast for a full test and tune on ChipTorque’s chassis dyno. The outcome was better than 850 tyre-spinning neddies and 1200ft-lb, so it’s fair to say this angry donk is good for more than 1000hp at the crank. But just in case that’s not enough, the hat’s plumbed with a 200-shot of giggle gas.

Is there a drawback? “The cost of running gear kills you! You can’t just buy any gearbox or diff; they’ve got to be rated to 1500hp. And they cost a bomb.”

The items in question are a manualised TH400 and a nine-inch complete with Currie alloy pumpkin, alloy centre, alloy pinion support and stout 31-spline axles — all pure race-spec gear. 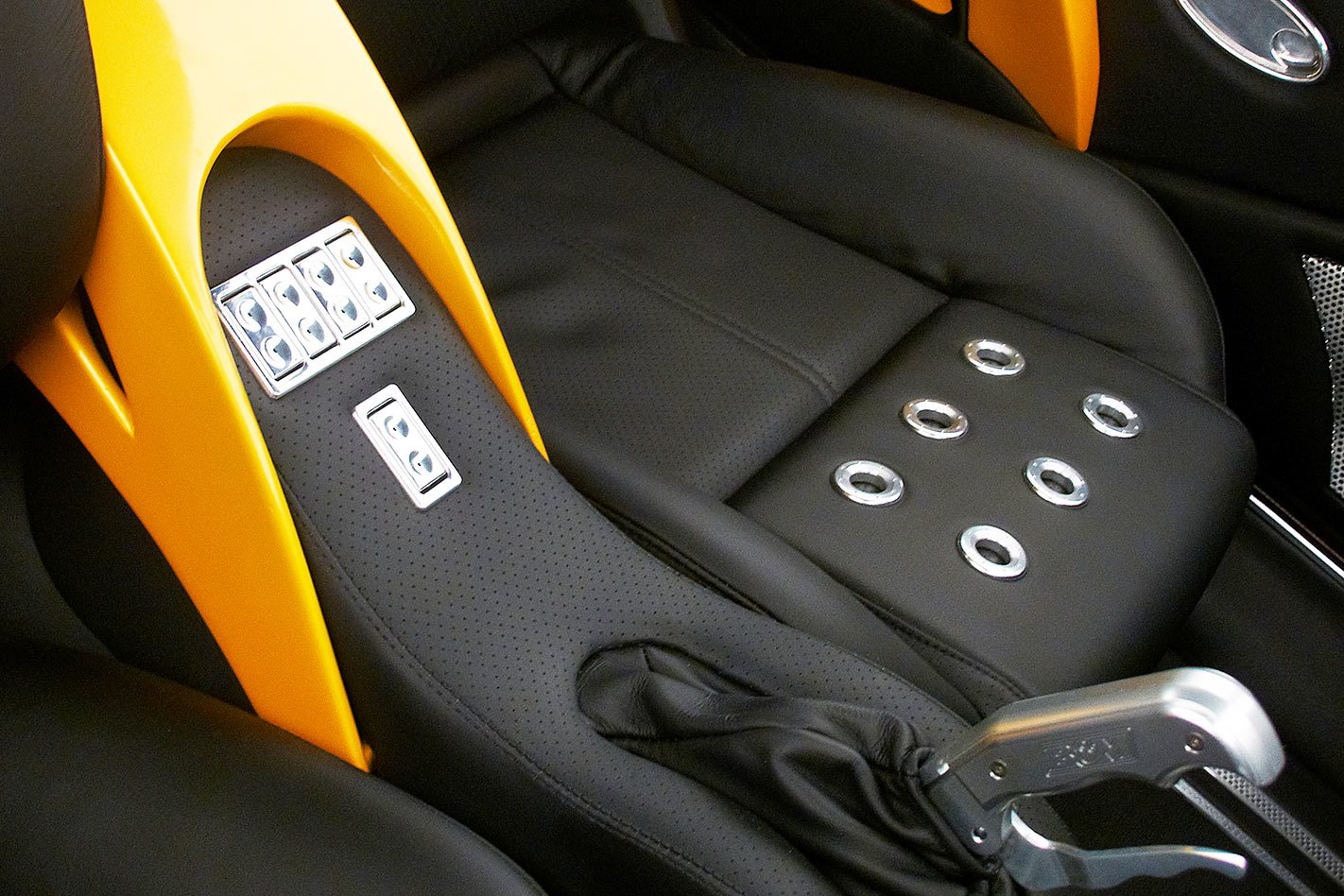 These billet switches are among the many trick interior features. The top four control the front and rear windows, while the single one below operates the exhaust cut-out

At the moment, the snarling mill is dialled in for methanol but swap the top pulley and it’ll happily run on pump fuel and cruise the public highway. Which is exactly what Rob intends to do when he ships it across to the US.

Typically, your streeter’s power-assisted brakes use engine vacuum to lighten the pedal load. The problem in blown applications, or when a high-lift, long-duration camshaft is used, is a lack of vacuum to run the brakes. The Hydro Boost system from Classic Performance Products (CPP) solves this problem by using pressurised hydraulic oil (from a power steering pump) rather than vacuum to assist the brakes. It slots in behind the master cylinder in the same location as a traditional booster, offers a nice smooth action for precise brake modulation and is capable of supplying more than 1300psi to each caliper. Also, if an engine transplant has left insufficient room for a traditional booster, the compact nature of the Hydro Boost could well be the answer. 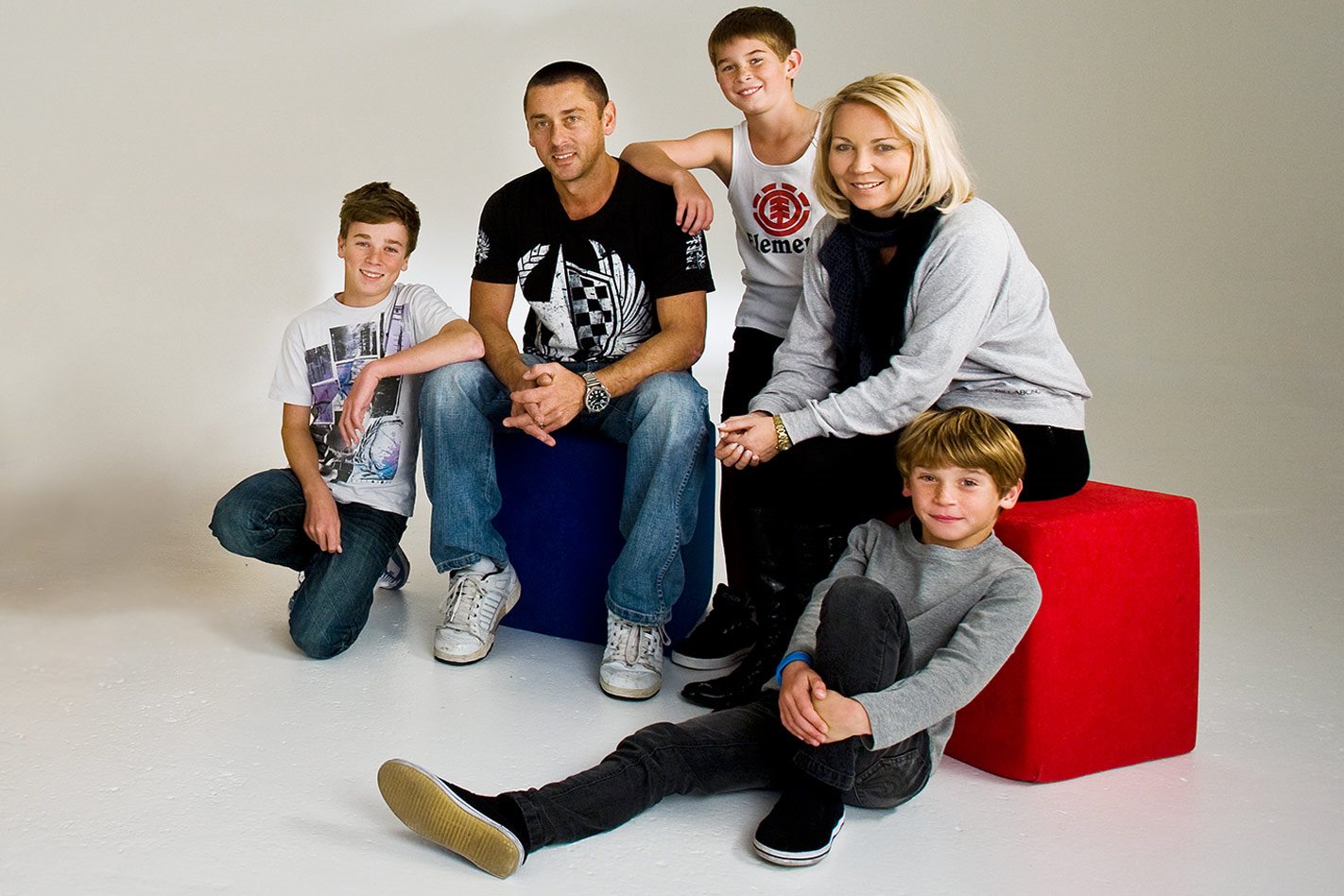