BACK in the 1990s, Dick Tierney was wearing his best flannos, rocking out to AC/DC and cruising to swap meets in a tidy XM Falcon Deluxe coupe. He’d fixed it up, fitted a 302ci Windsor and, like any young bloke, drove the wheels off it. Time passed; he met Debi and started a family. Right around then, Dick got wind of another XM coupe for sale, this time a Futura. Having grown up around early Falcons, he knew it was a desirable model, as rare as this particular example was rooted. He knew he had to have it though, so a deal was brokered.

While his old XM coupe was a handy unit, the Futura had to be done bigger and better; most importantly, it had to be done right. Not ready for the level of commitment that entailed, Dick pushed the Futura into a corner of the shed and told it to wait. And there it snoozed for 10 long years. 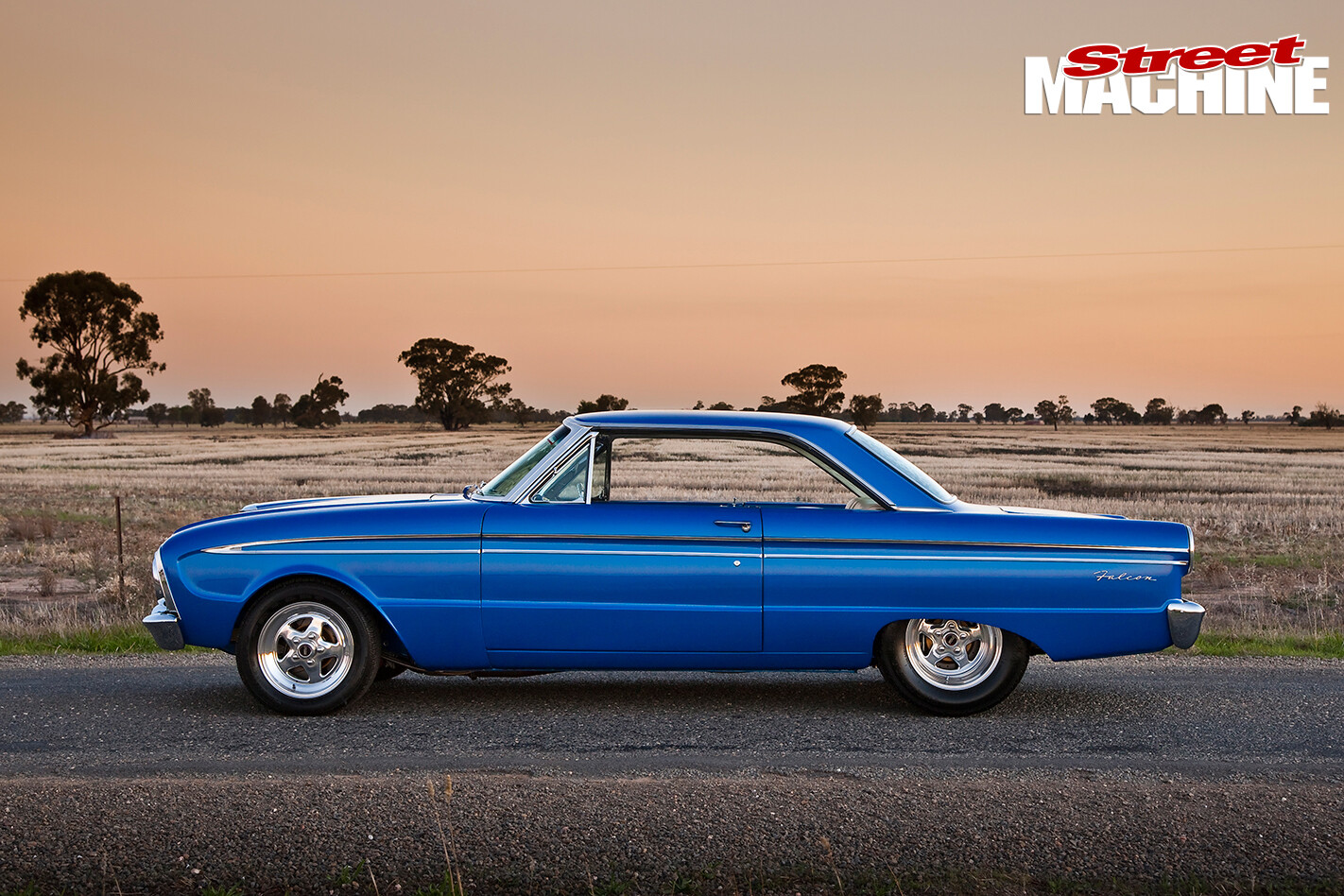 Fast-forward a decade. With his son Bradie and daughter Codie now a bit older and the wallet a bit less full of moths, Dick headed out to the shed one night to check on his coupes. Sipping on a Beam, he realised the day had arrived. It was time. Futura time.

With the help of Trevor Monti from Prestige Panels, Dick was able to formulate a plan of attack: tubs, panel work, then paint, with different experts enlisted to handle each area. ‘Hoota’ Hendy and the late Daryl Talbot attacked the tubs, subtly widening them but retaining a stock look, while the bodywork was rectified but left standard – after all, a Futura isn’t a Futura if the obligatory brightwork is binned.

7
It's taken 20 years, but Dick's Futura has finally come to pass

Vinney’s of Dandenong fixed up the chrome while Trevor himself applied the blue duco, basing it on Ford’s Shockwave hue, but revising the tint to create a new colour dubbed ‘Dickwave’, after his new best customer!

A mechanic by trade, Dick can screw together a stout Windsor with his eyes closed, but when he changed his approach and decided to go blown, he handed the incomplete project over to a forced induction expert.

7
It's a tight fit, but the 347-cube Windsor sits nice and snug with no cutting in the engine bay. With the bonnet up, the blower pulley doesn't appear to fit, but it sits right up in the factory bulge!

Adam Beaman at Bendigo Engine Reconditioners took Dick’s XW-spec 302, stroked it out to 347ci using a Scat crank, then fitted a tonne of high-end stuff: eight Keith Black pistons, a pair of Procomp alloy heads and plenty of Crane bits throughout, topped with an under-bonnet Weiand 177 supercharger sucking through a Barry Grant 850cfm carburettor.

It’s a combo designed to be quick and reliable, something it has been since day one, thanks to Adam building, tuning and dynoing it before installation. “I figured if he built it, tuned it, and then blew it up, he could then fix it!” laughs Dick.

7
Dick was going to trim the boot area, but the work was so good, he decided to showcase it

“We could have made more power, but I didn’t want a hand grenade,” he continues. “It’s got 565 horses on the bench; that’s enough for what I want.”

It was this mentality that helped dictate the rear end; while having the underbody done, Dick hadn’t catered for the extra space a nine-inch would require, so he needed a smaller differential that was strong enough for cruising but could still take a bit of stick.

7
XM Falcons didn't have enough space for stout nine-inches, so Dick settled for a BorgWarner from an EL Falcon XR8

A shortened EL Falcon XR8 BorgWarner was installed and shifted back two inches, extending the wheelbase slightly and, crucially, allowing the fat 295-section rear Yokohamas to fit without molesting those stylish rear arches.

The body is kept level with a pair of rear airbags and held off the ground by a set of Weld Pro Stars – five-inchers up front and sensible 10s down back. The Weldies are directed by an RRS rack-and-pinion system and custom column.

7
Big Yokohamas just fit inside the stock arches thanks to a two-inch shift in the rear axle location. Dick didn't want to make major body alterations on such a rare coupe

Of course, doubling the capacity and embiggening the power five times over required a brake upgrade, with RRS slotted front rotors and DBA EL Falcon rear rotors being a perfectly cromulent solution, especially with Codie’s safety to think about.

You see, when this project started 12 years ago, Bradie and Codie were just kids, but now they’re young adults and Dick is happy to let them cruise the coupe. The twist is that Bradie isn’t remotely interested, while Codie loves it! Having regularly attended car shows with Dad growing up, she spent the past decade threatening to drive the Futura the day she legally could, something she made good on. “I always said she could; I just never thought the day would come!” Dick sighs.

The Futura has been on the road for a couple of years now, and while it’s garnered its share of trophies, Dick built it to drive. So what’s next for a man who spent the past 20 years creating his perfect XM Falcon coupe?

“Time to rebuild the other coupe,” Dick responds. “The one I used and abused while I was building this one! It won’t be as perfect as the Futura, but it won’t take 20 years either.”