With 572 cubes of blown Hemi, there's nothing 'little' about this Deuce coupe

This article on Chris Thomas's Hemi-powered Ford coupe was originally published in issue 16 of the Street Machine Hot Rod magazine, 2015

THERE’S a story I bet you’ve never heard before: “I set out to build a simple, tough hot rod, and things got out of control.” 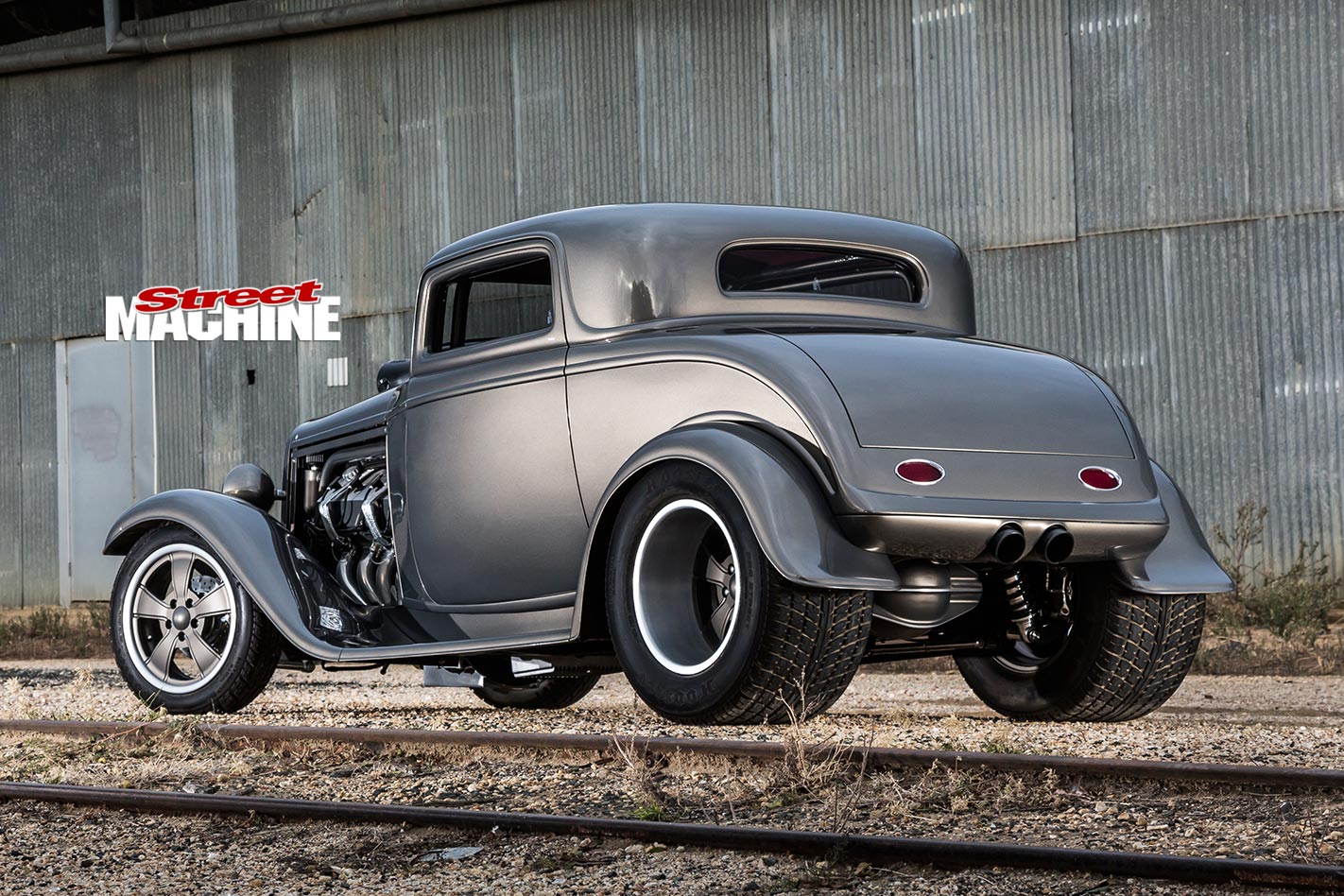 If the lump up the front doesn’t spell things out enough for you, those fat rear meats send a loud, clear message that this is one hot rod not to be messed with

Chris Thomas, the owner of this ballistic Hemi-powered ’32 three-window, blames Norm Longfield. “He got me hooked on Hemis when I helped him with his blown Hemi Willys years ago,” he says. “He took me for few laps at Summernats and I’ve also gone for a ride in ‘The Boat’. They’re the most powerful things I’ve ever been in.” 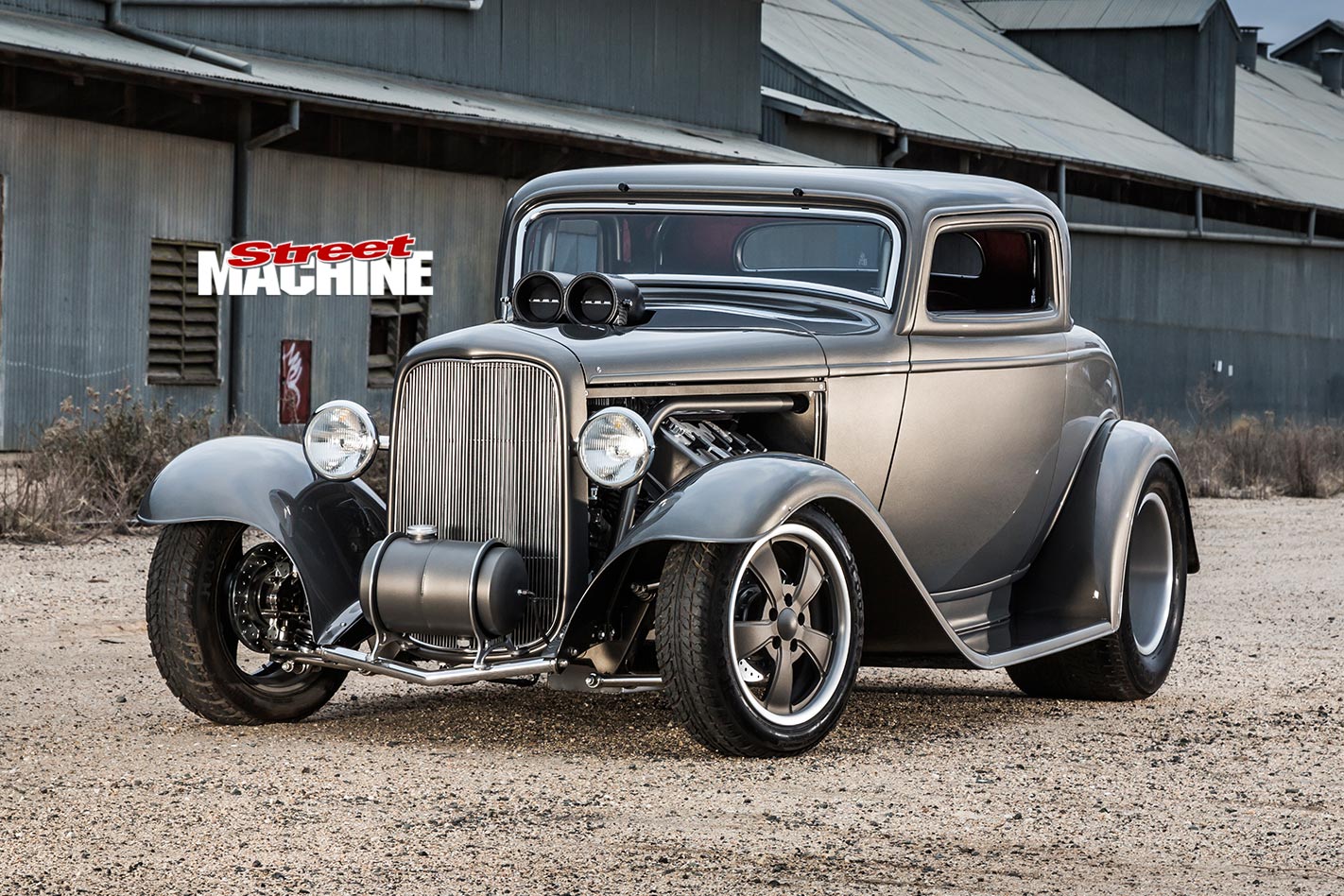 Having sampled the forbidden Hemi fruit, the original plan for a simple, blown small-block for his ’32 got heaved out the window and Chris went on a Hemi shopping spree. By the time he was done, his checkout cart included an Indy Maxx alloy block, Indy Legend heads, Callies crank, Ross forgies, Howards roller cam, MSD ignition, Hampton 8/71 pump and Hilborn Shotgun scoop converted to EFI. 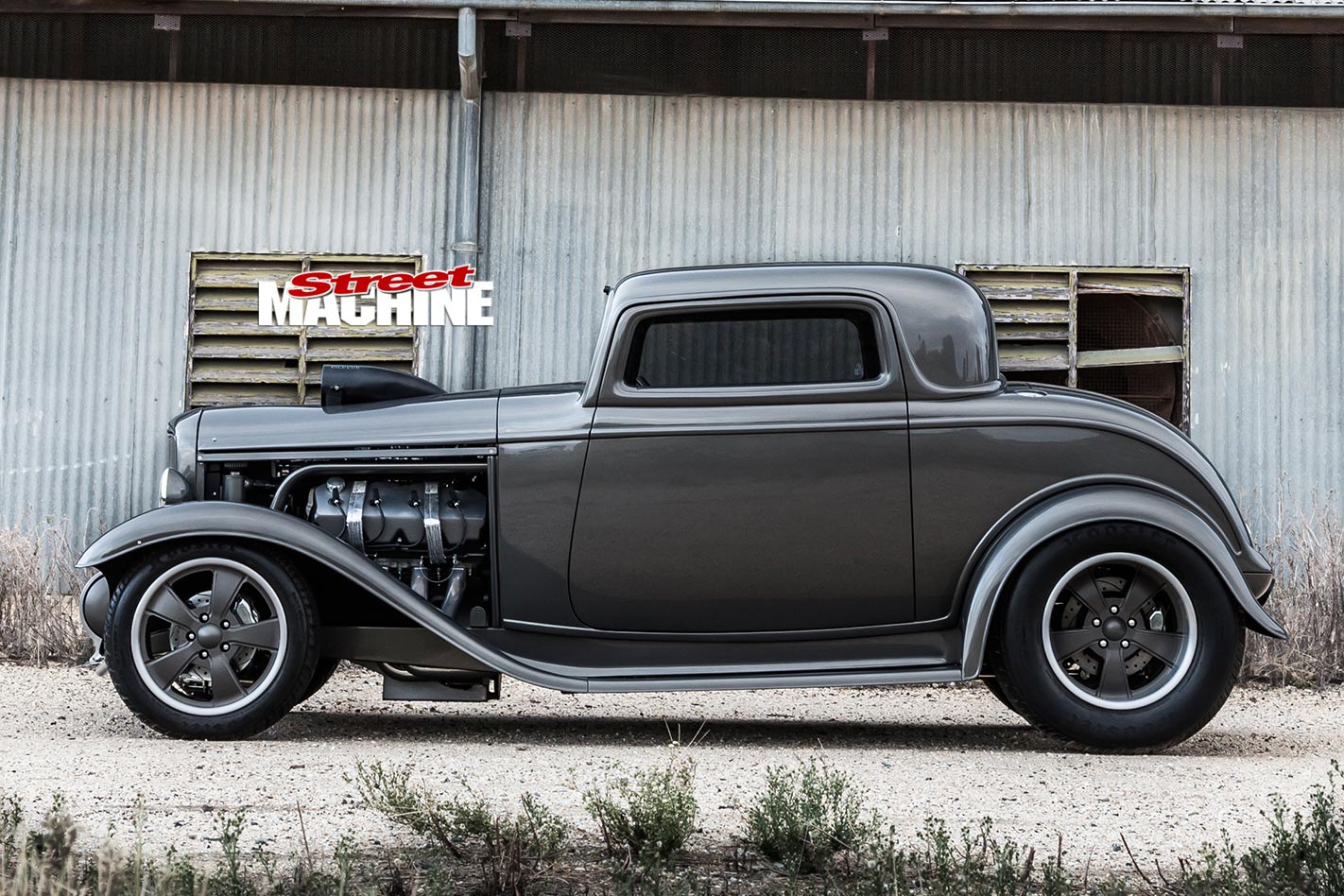 To screw it all together, Chris wanted someone who knew their way around tough Hemis, so he knocked on Maurice Fabietti’s door. In between building some of Australia’s quickest Top Alcohol and Doorslammer engines, Fabietti Race Engines punched the alloy block out to 572 cubes and proceeded to fill it with all the goodies Chris had painstakingly collected. The Hampton’s only pushing 5psi boost, but thanks to the fettled heads, monster cam, good compression and perfectly square 4.5in bore and stroke, this thing’s a complete animal. 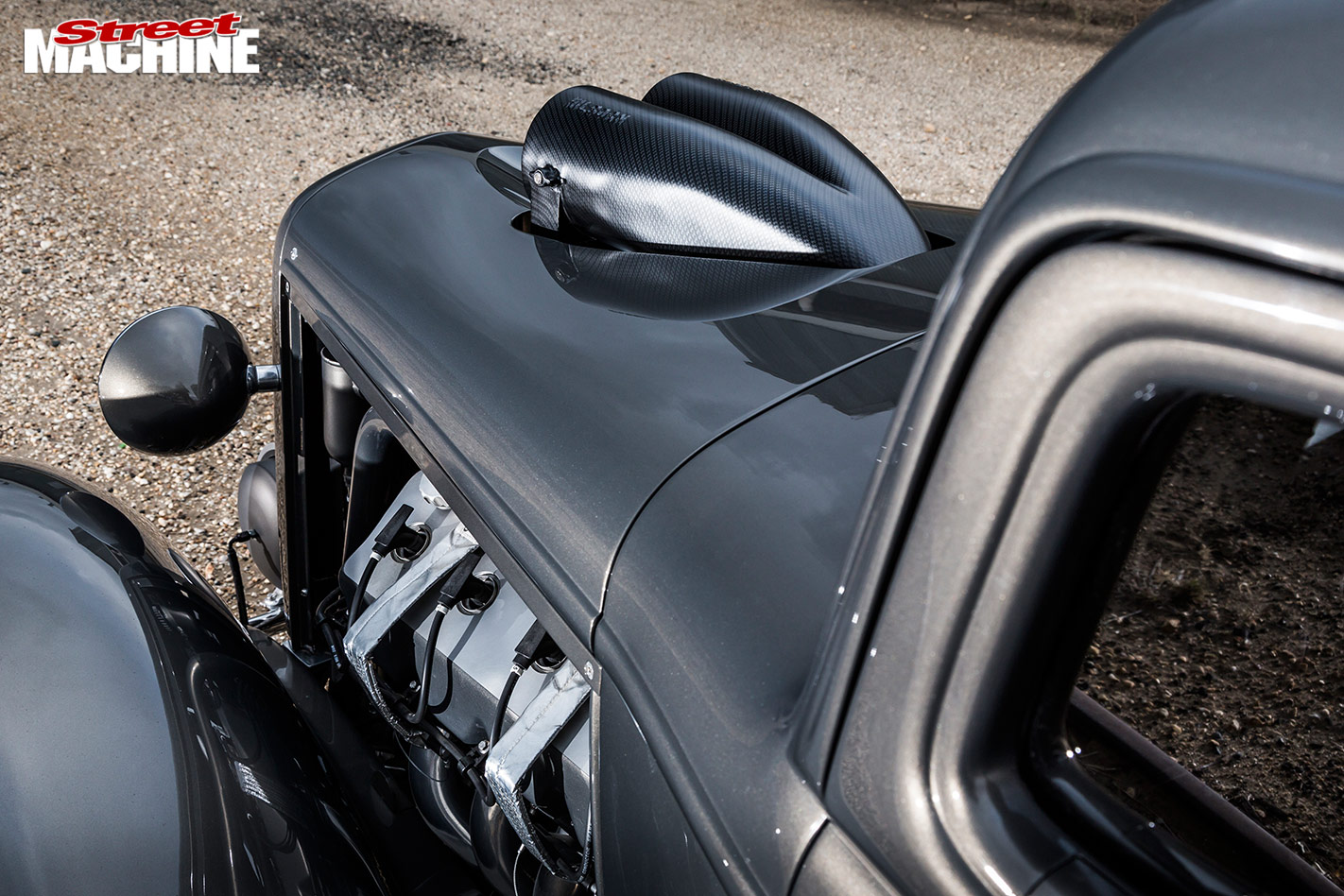 To give it that purposeful race-ready look, Chris had the cast-alloy Hilborn Shotgun scoop coated in carbonfibre-like material. “It came back with a full-on gloss finish,” he says. “It looked terrible!” Chris baulked at the cost of a genuine carbonfibre replacement, so Shane got a little creative

“It’s got a real ‘rump-rump’ to it,” Chris says, “and turns the tyres with ease – it’s so impractical. But when you’re driving, people are sticking their heads out the window and taking pictures. It’s priceless!” 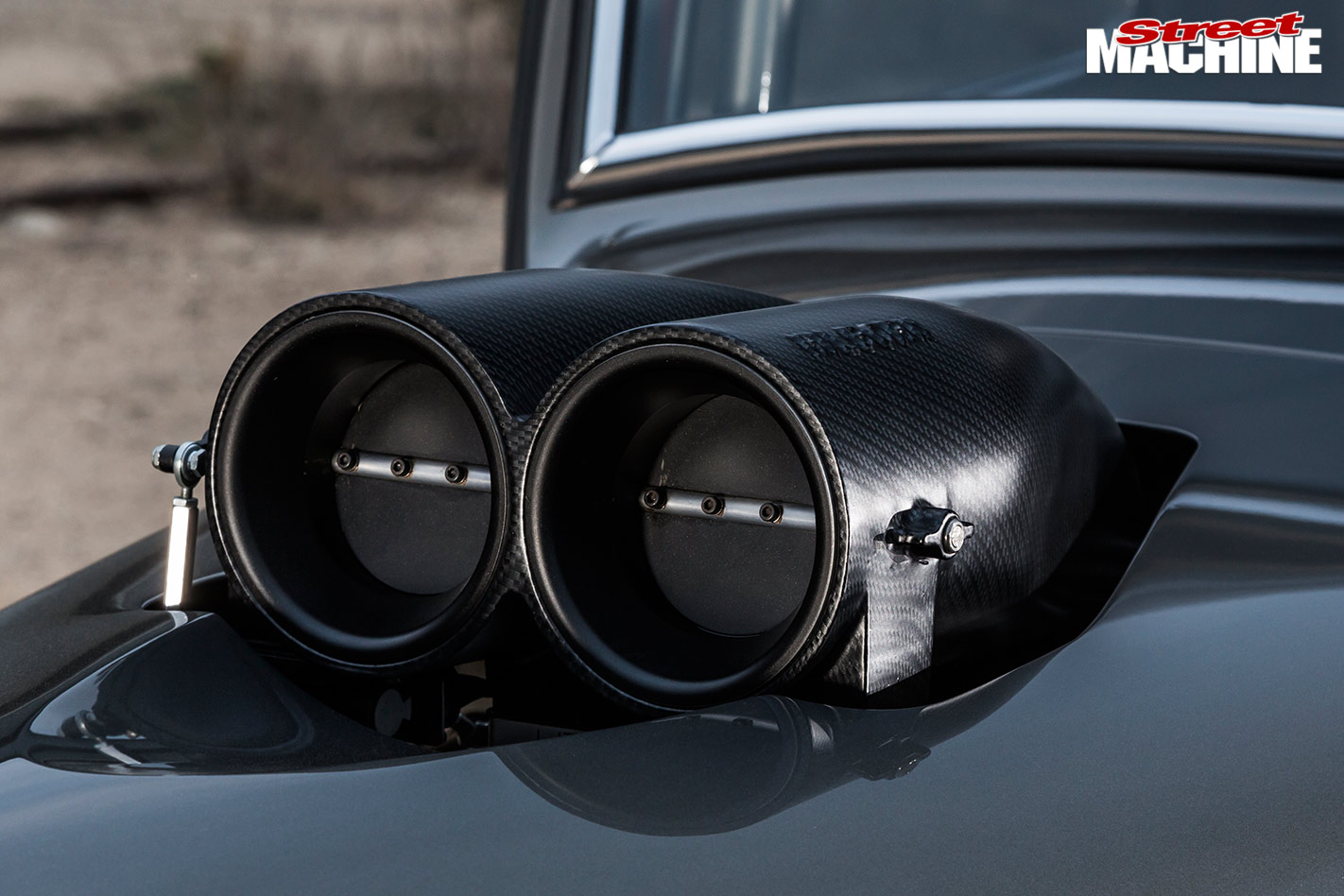 “I rubbed back the gloss and repainted it matte clear, to which I added a touch of gold tinter,” he says. “It gives it that gold tinge that real carbonfibre has. It’s very convincing; you have to get right up close before you can pick it’s not the real thing,” Shane says

With the engine sorted (and 110 per cent of the original build budget blown), the next challenge was slotting the elephant donk into the diminutive ’32 Ford. How did they do it? “You use a bloody big shoehorn!” laughs Hemi Deuce’s builder, Shane Rowe of Southern Rod & Custom. Part of the trick is the low-profile, billet Milodon oil pump with remote pick-up in the sump – which itself is a special low-profile piece that still holds eight litres. Even the filter is offset for more clearance. 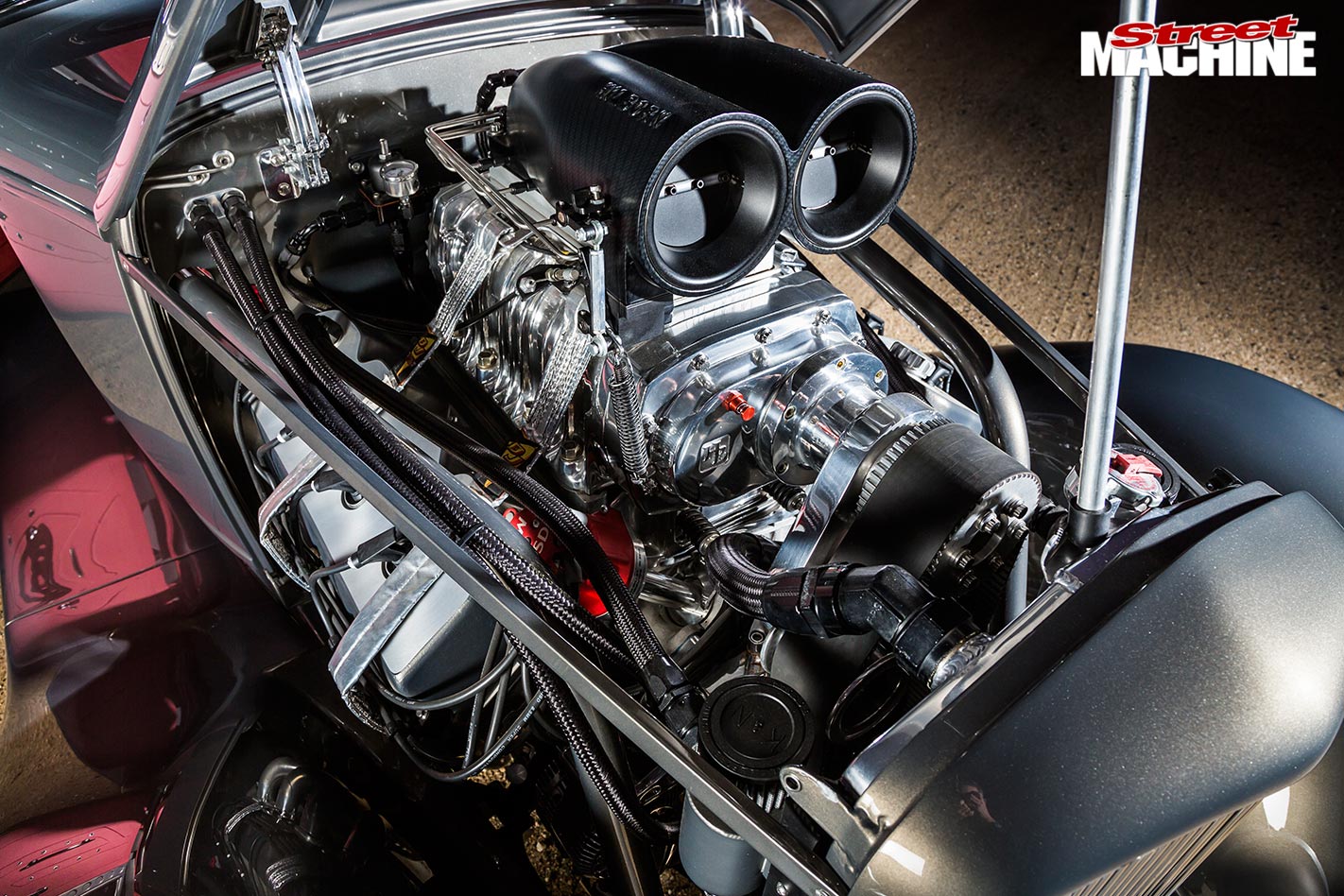 Surprisingly the Hemi is no longer than a big-block Chev, but it’s a heck of a lot wider. Check out how far the rocker covers and those race-spec blower hold-down straps poke out past the body line

Oh yes, and the coupe’s also been stretched two inches, forward of the firewall, a common technique to give the ’32 better proportions. Lilow provided the rails, which SRC kicked in six inches at the rear then fully boxed, before adding in the crossmembers and a central X-member. One of those crossmembers anchors the four-link rear end, while another is an integral part of the rack-and-pinion-equipped Rod-Tech IFS. 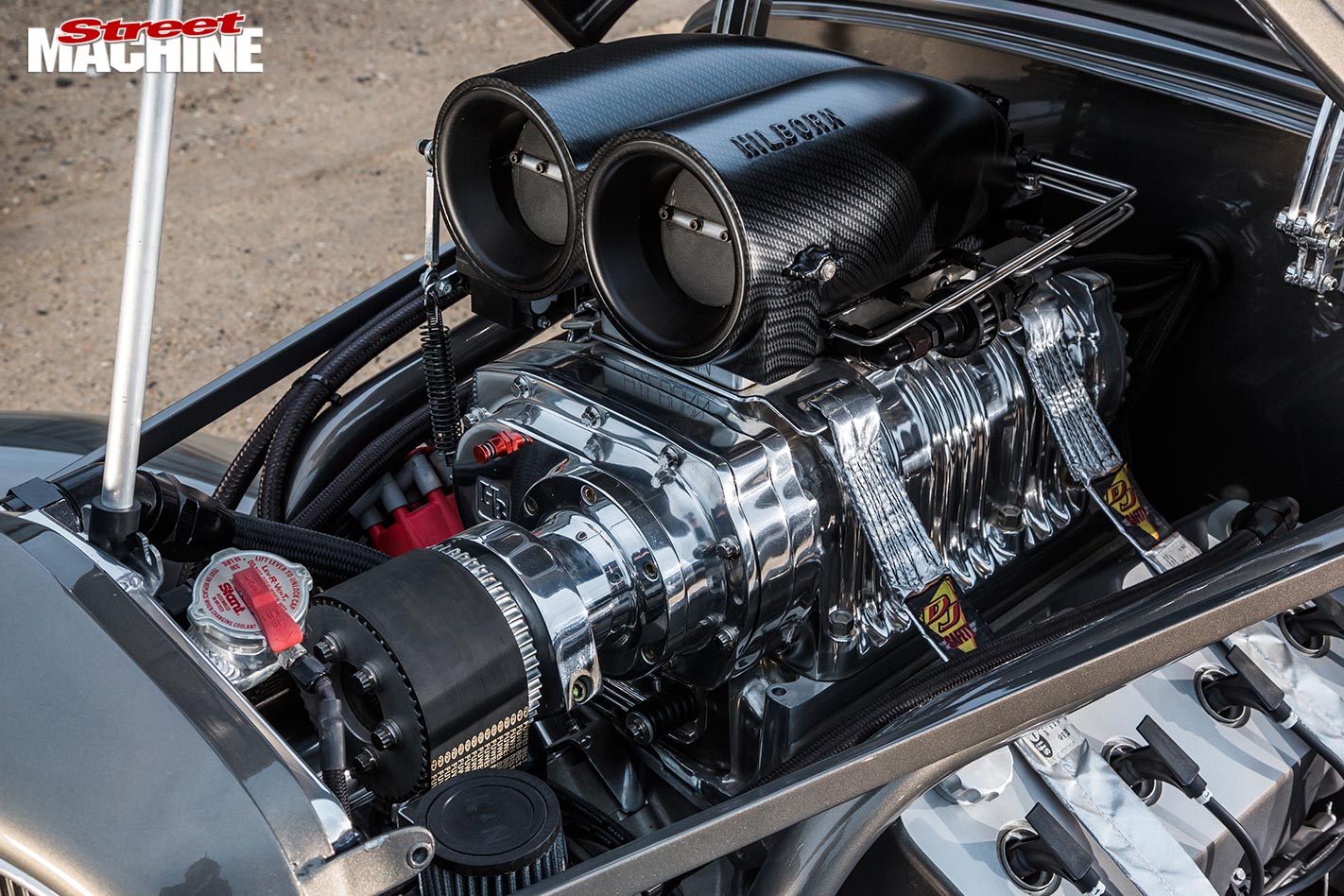 Sitting on top of the beautifully detailed chassis is a Deuce Customs body that sports suicide doors and a three-inch chop. Knowing just about everything was going to be modified, SRC ordered the body minus firewall and floor, instead fashioning its own versions out of sheet metal. 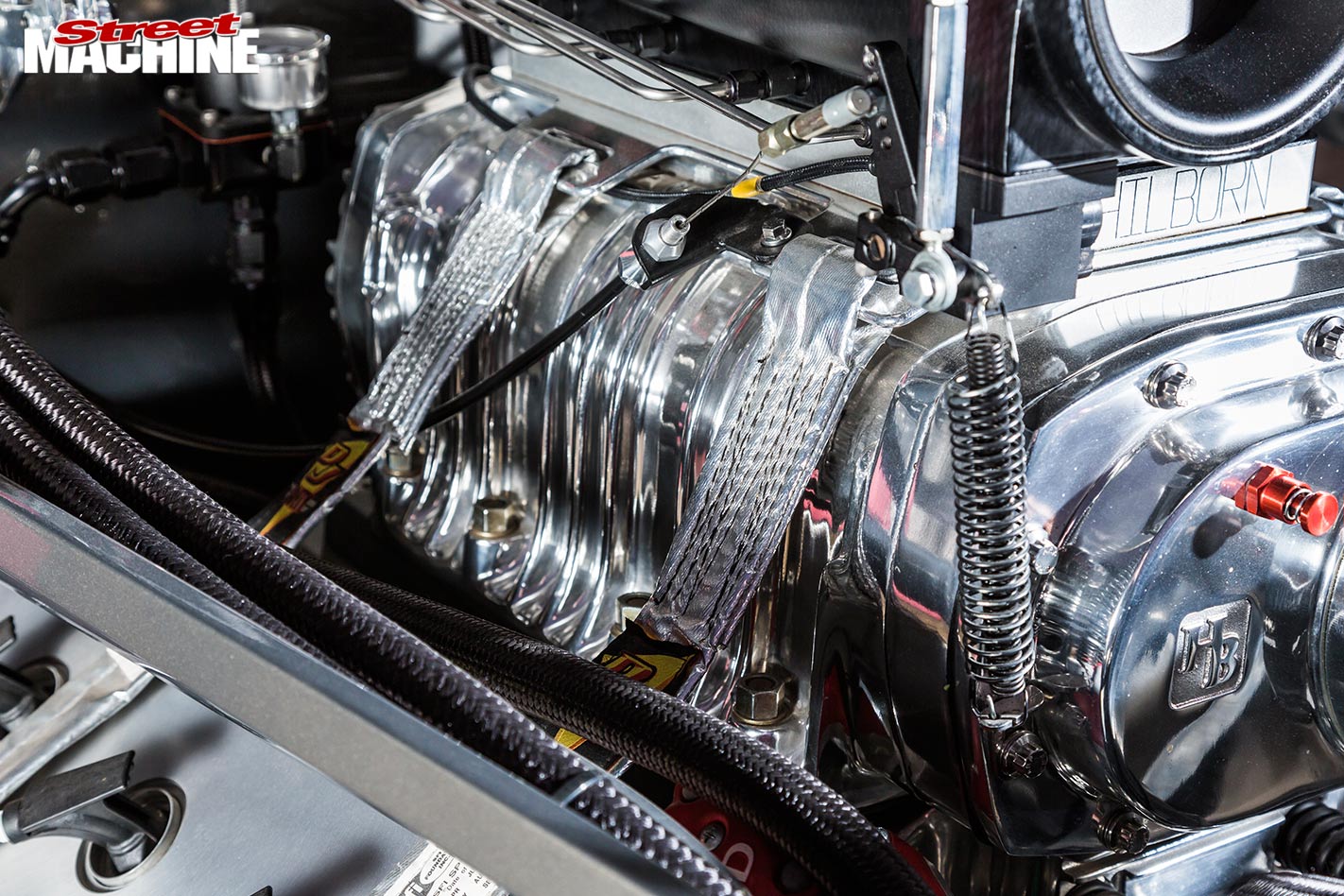 To accommodate those meaty rear Hoosiers, the body was tubbed and the guards widened – which consequently required modification of the running boards. While he was at it, Shane shortened the rear guards four inches and routed the exhaust out through two cut-outs in the rear beaver panel; both changes clean up the look of the ’32’s rear end.

With body mods finalised (including the addition of a recessed fuel filler up on the shoulder), Shane got stuck into massaging the body into shape before laying on the flawless PPG Pearl Grey. 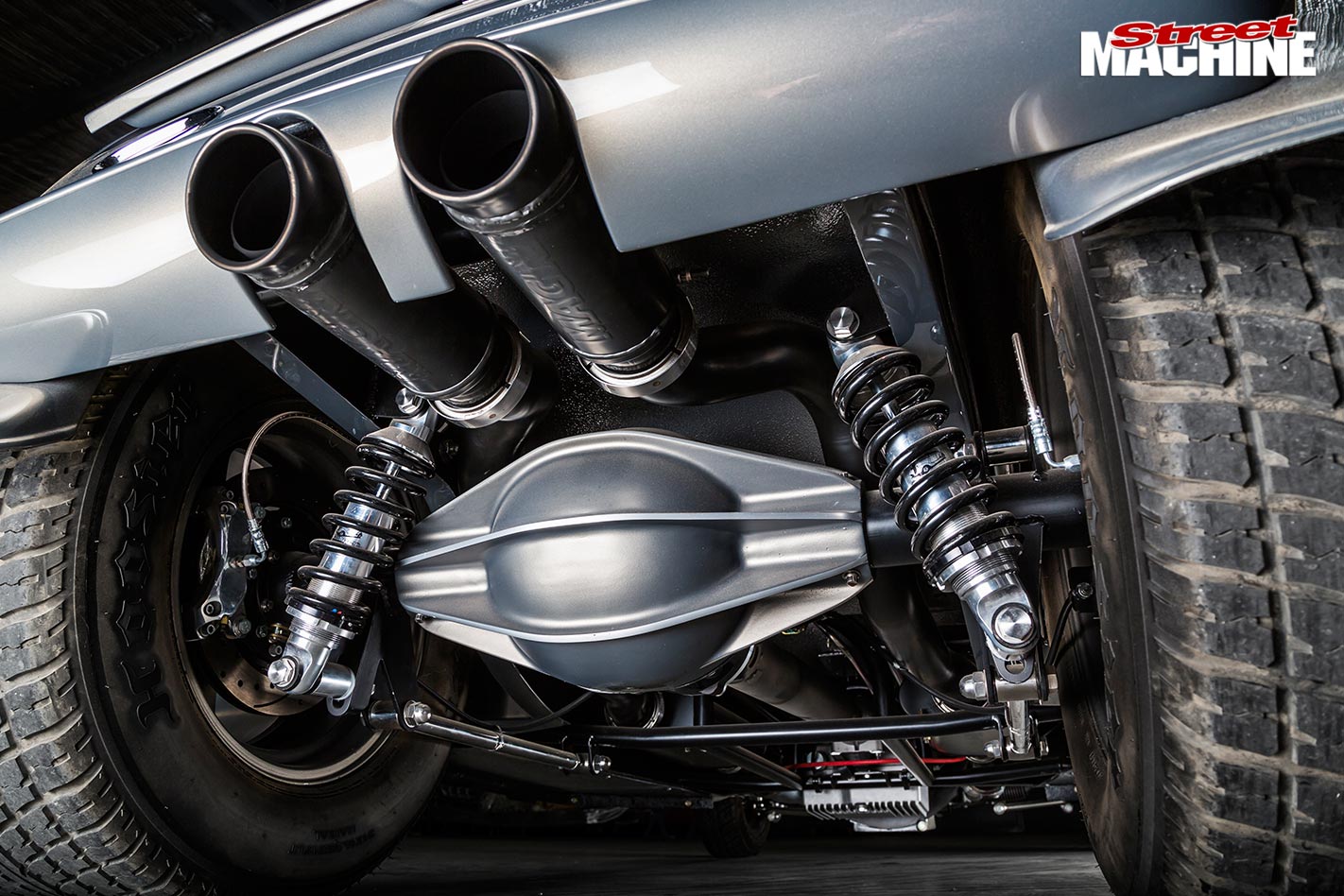 “I knew exactly what colour I wanted,” Chris says. “Shane mixed up about five different options and sprayed out a few panels. I picked this one, which was also Shane’s favourite. The gold pearl really shows through when it’s out in the sun.” 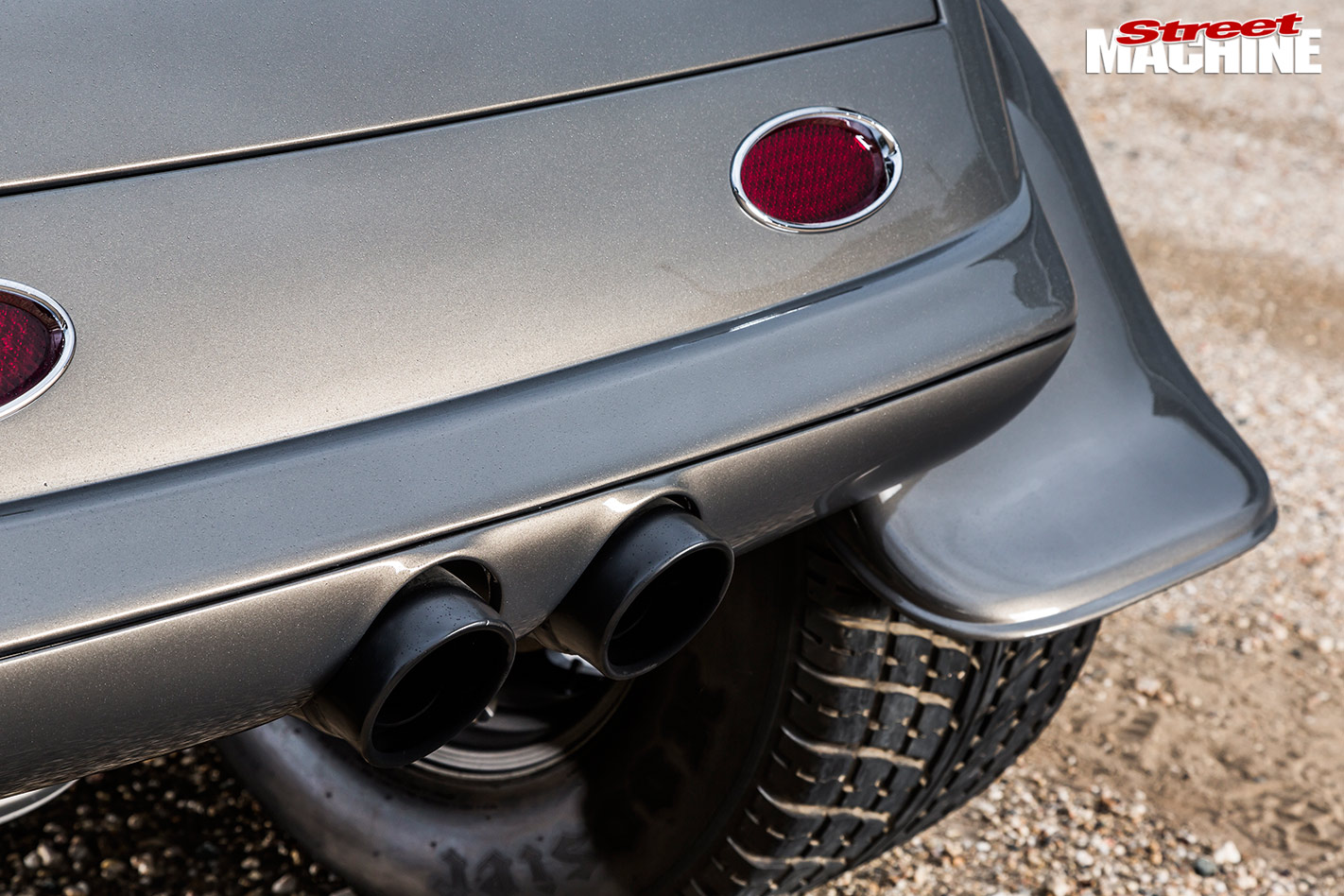 Up the front, that two-inch chassis stretch meant reaching for more resin and chopped-strand mat to lengthen those flowing front fenders. With that big hole for the Shotgun scoop, a traditional centre-hinged bonnet was never going to work. Instead, the hand-formed aluminium bonnet flips up like a modern streeter. Inspiration for this came from Les Lawry’s green ’32 roadster. 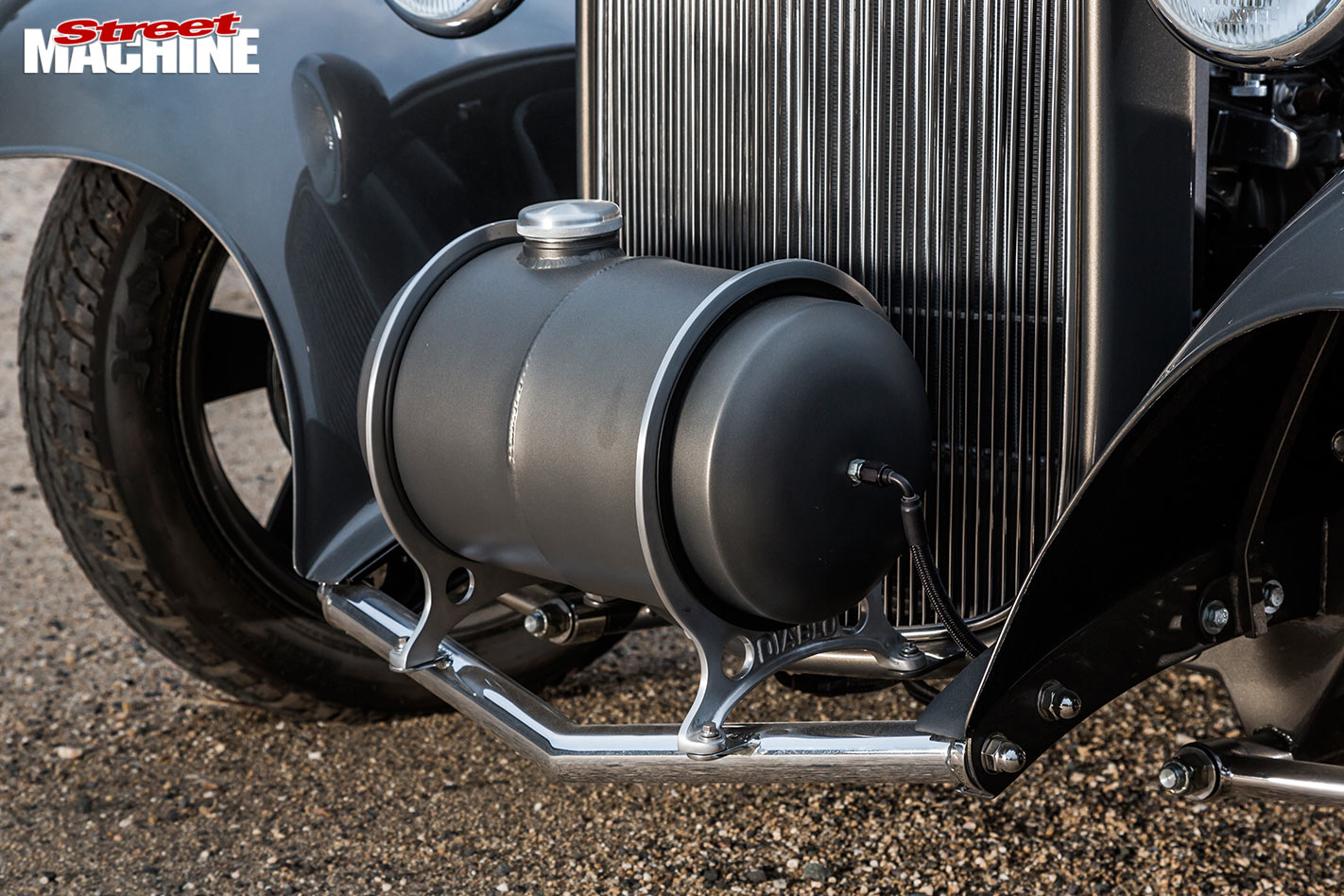 That front-mounted tank is not just for show – it actually serves as the radiator overflow tank. Given the Hemi’s thirst, even the 70-litre boot-mounted fuel tank gives the coupe a somewhat limited range

With 1000-plus Hemi neddies to contend with, the driveline needed to be as beefy as they come. To that end, a Neal Racing Powerglide with a 10¼-inch 3800rpm TCE stall converter is connected to a 35-spline Currie alloy nine-inch by a four-inch tailshaft with billet yokes at either end. 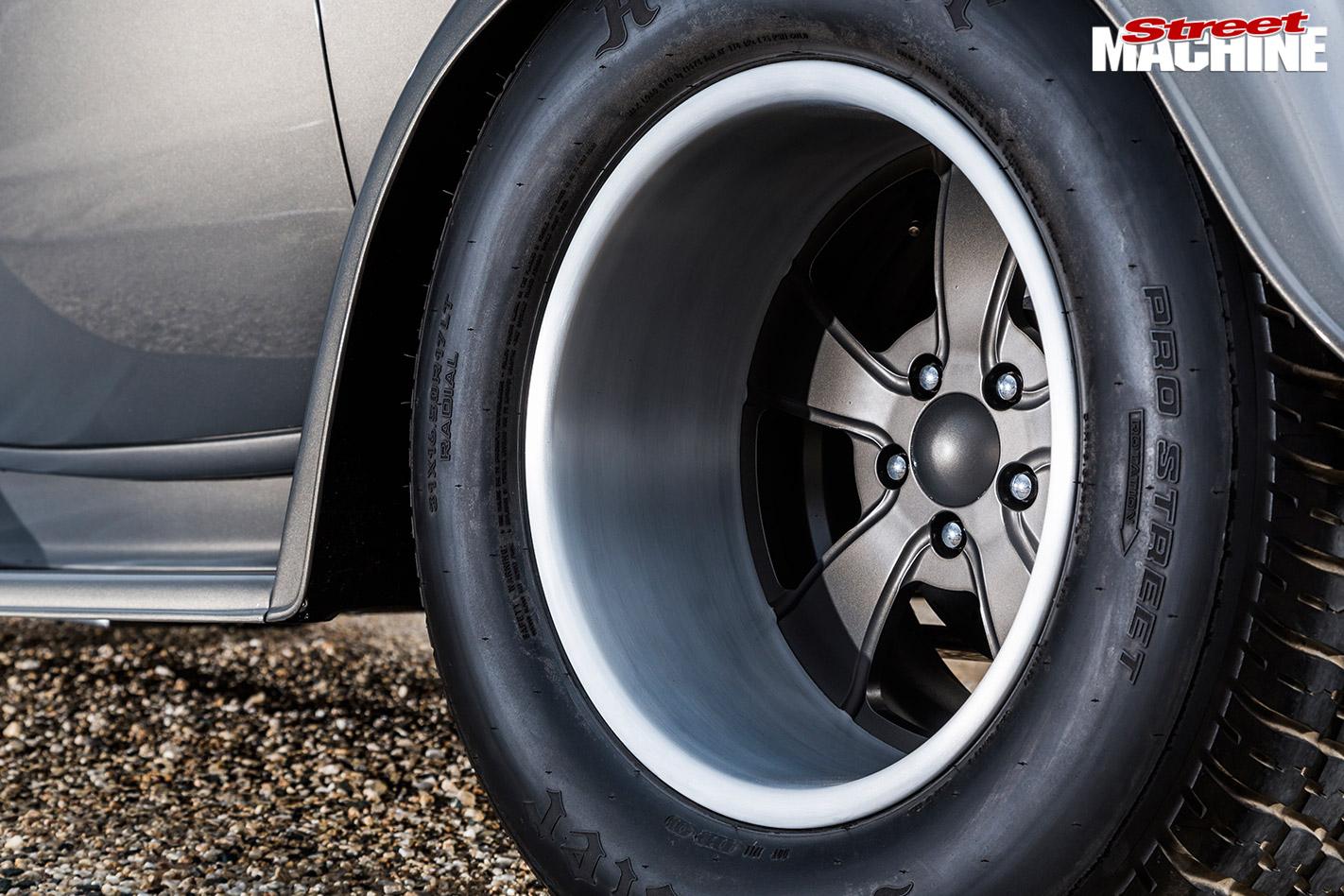 The width of the Hemi donk made header fabrication a nightmare. “Fabietti wanted 27/8-inch pipes,” Shane says, “but there was no way such a big pipe was going to fit down past the rails. I had to go 21/8; however I don’t think anybody will miss the slight drop in power.” 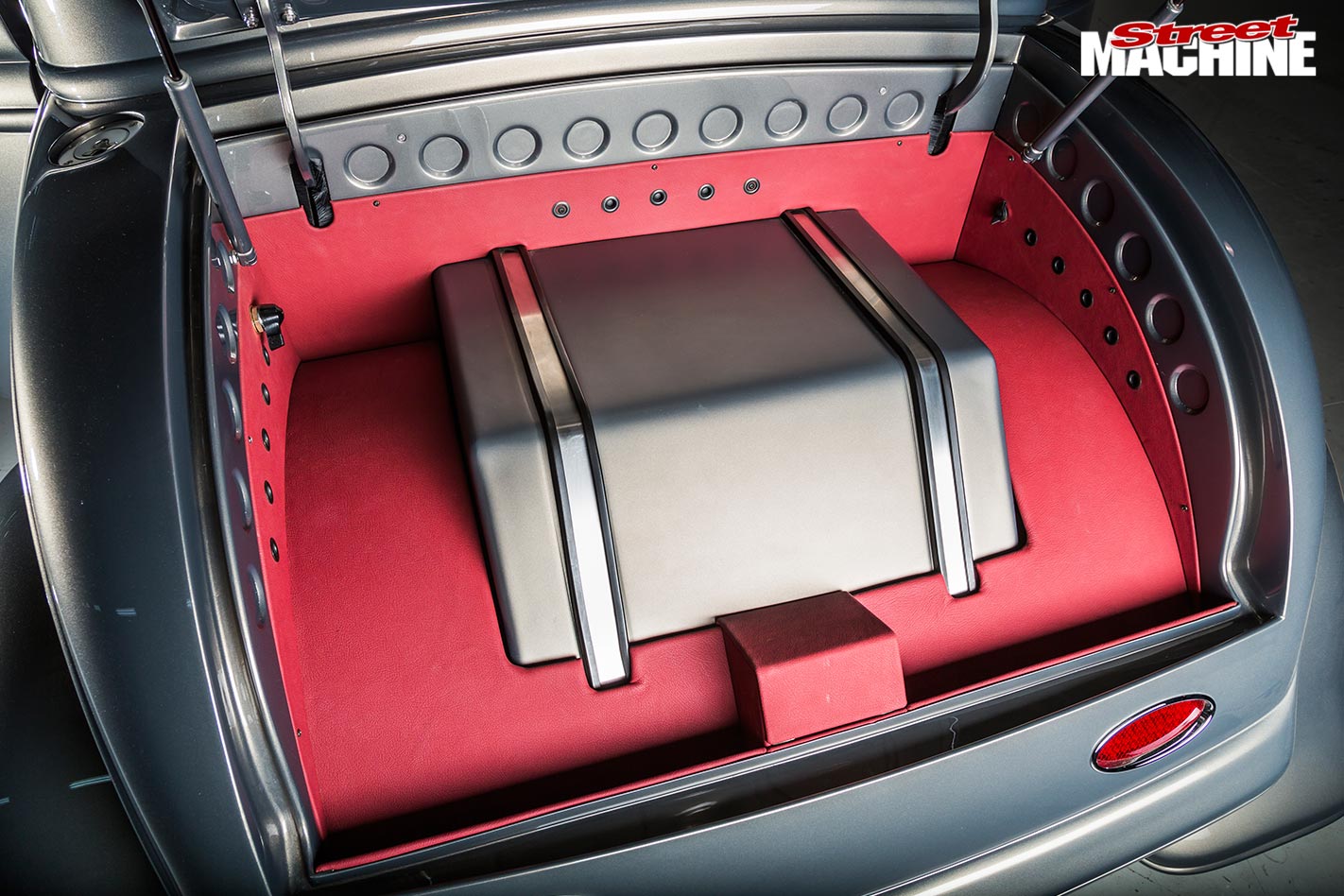 To keep the coupe from spearing off into the countryside, the braking department features dinner plate-sized vented rotors clamped by four-piston Wilwood calipers. These are actuated by a Wilwood master cylinder/booster combo that is tucked up under the dash. Chris’s feet push on custom billet brake and throttle pedals with a distinctive multiple-hole design, a theme that’s been employed throughout the rod. 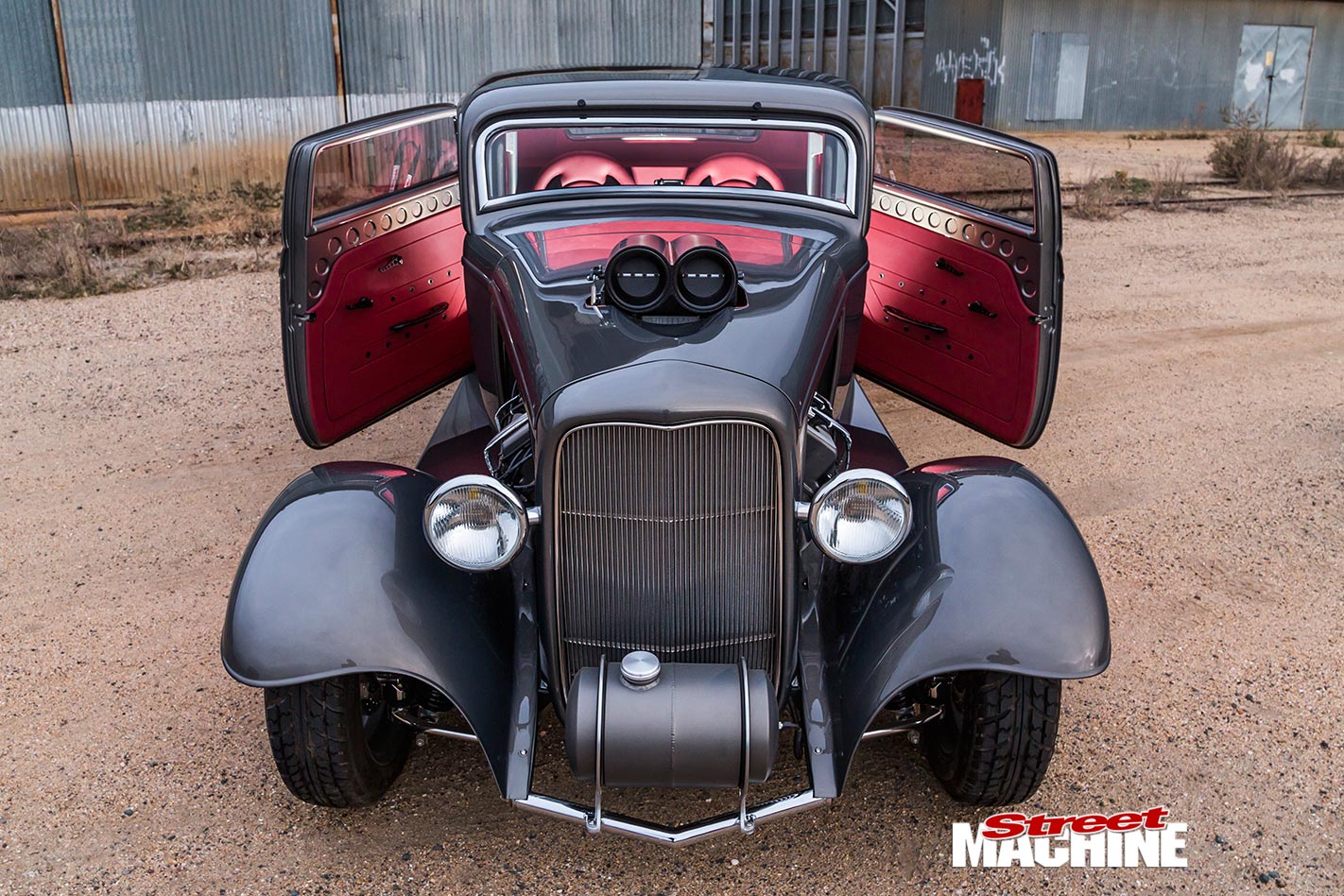 Minimalist and classy are terms not typically used to describe the same interior, but Hemi Deuce nails it. It’s as spartan as can be: fixed-back racing buckets, four-point harness, collapsible column, simple array of gauges, Lokar Lakester-series window cranks and doorhandles, bugger-all switches to speak of – that’s about it. 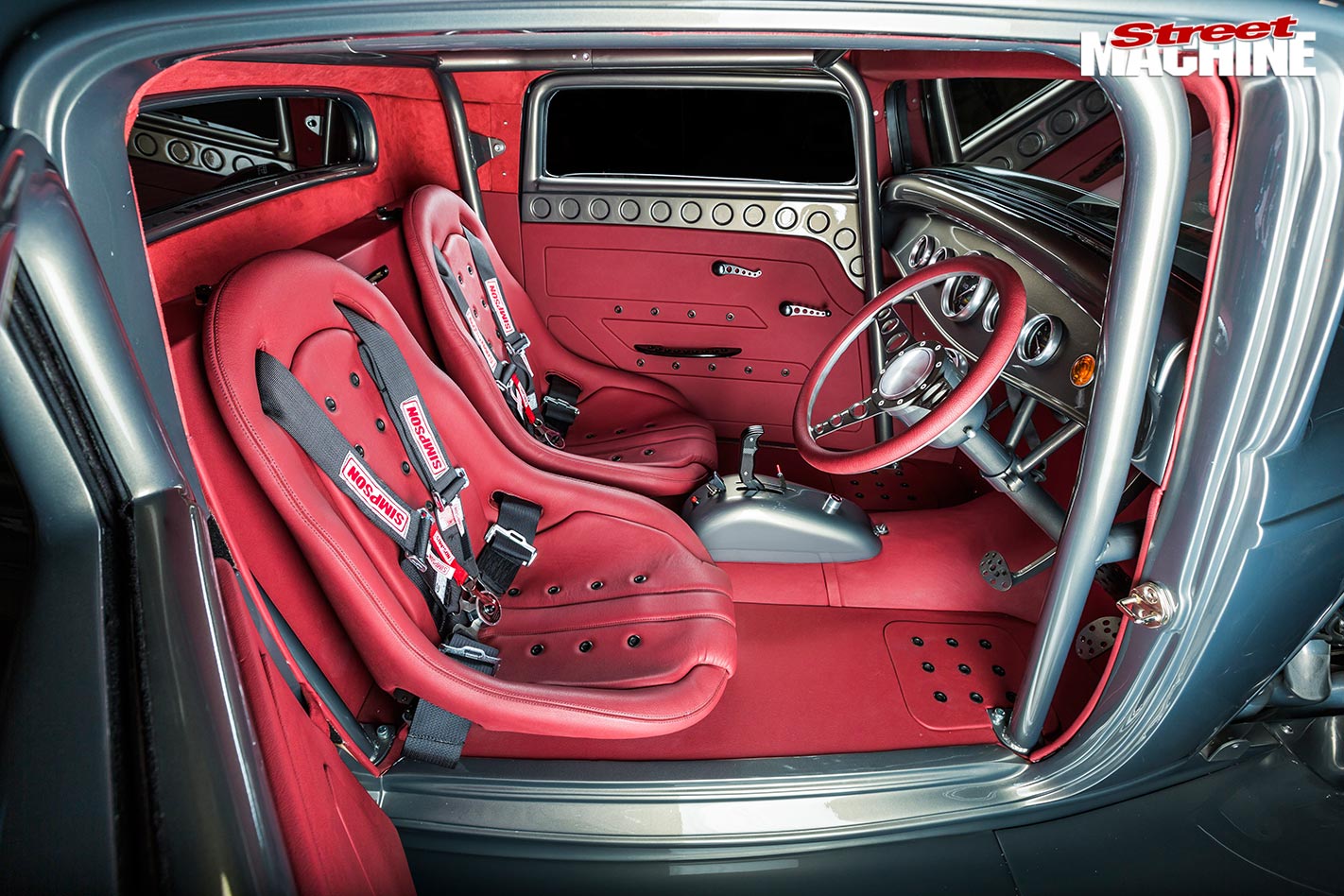 Simple and sanitary. Note the ‘punched hole’ treatment along the tops of the doors and the black interior accessories. Auto Meter Carbon Fiber-series instruments help keep tabs on the vitals

Using slick stitchwork, dozens of round black eyelets and several oxblood-dyed cowhides, Mick Carter from Mick’s Custom Interiors added the elegant upholstery. The injection-moulded RCI race buckets normally come with sliding mounts, but the top of Chris’s noggin was touching the hoodlining due to his lofty, six-foot-plus frame – the buckets are now bolted directly to the floor. 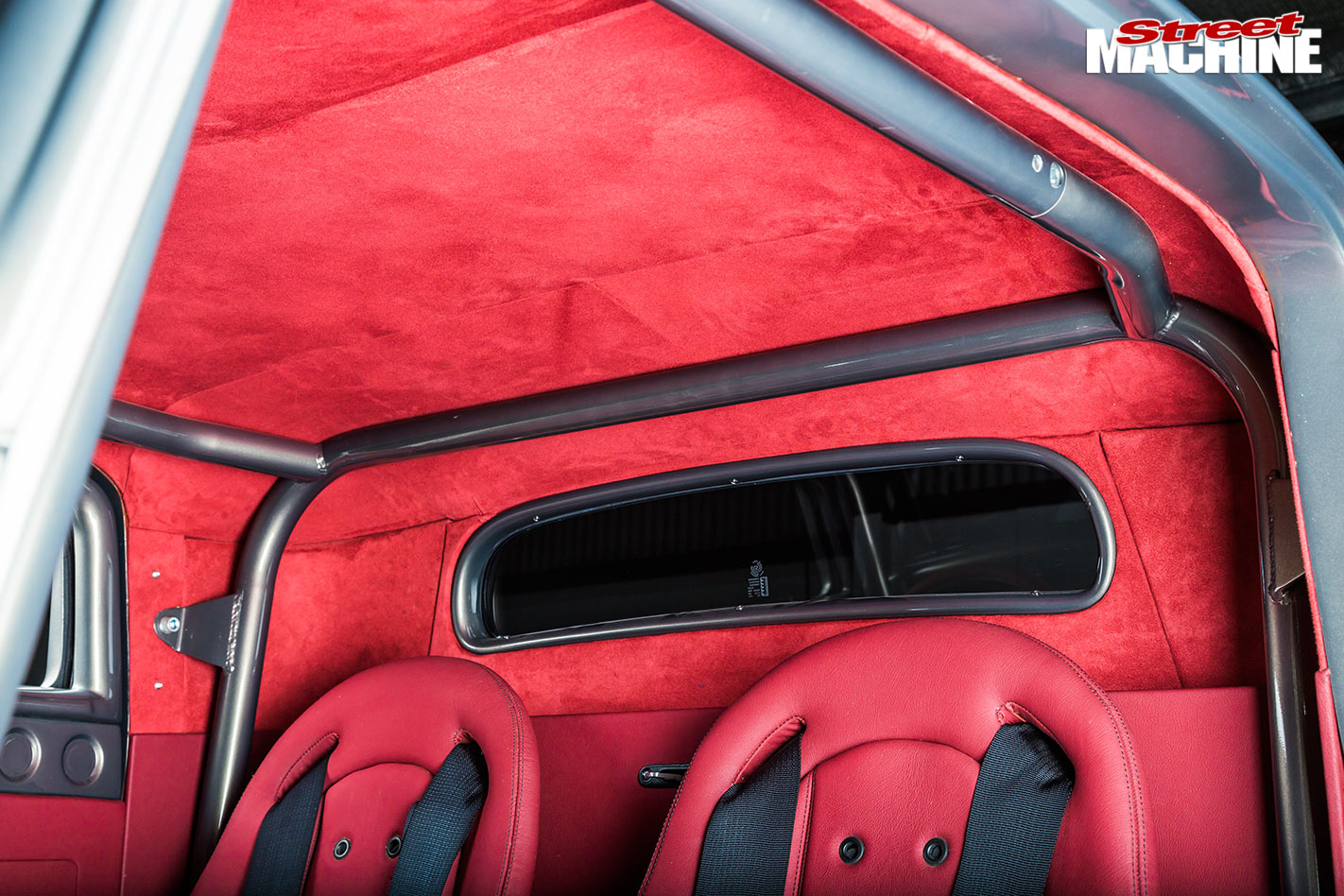 The rollcage is anything but decoration. That stout Hemi churns out enough frame-twisting torque to coil your typical hot rod into a pretzel. Installing a ’cage that still enabled the body to be removed called for some clever thinking. It all bolts together using NHRA/ANDRA-spec interlocking tube couplers. The ’cage extends out through the firewall, all the way to the front, as well as back into the trunk.

Typically, rods with such monster rear meats drive like a pig. “Normally they walk around on the tyres, the bum starts moving around,” Shane says. “This drives really nice, just with stupid amounts of power. First time it went out the gates, it left a pair of blacks that are still there.” 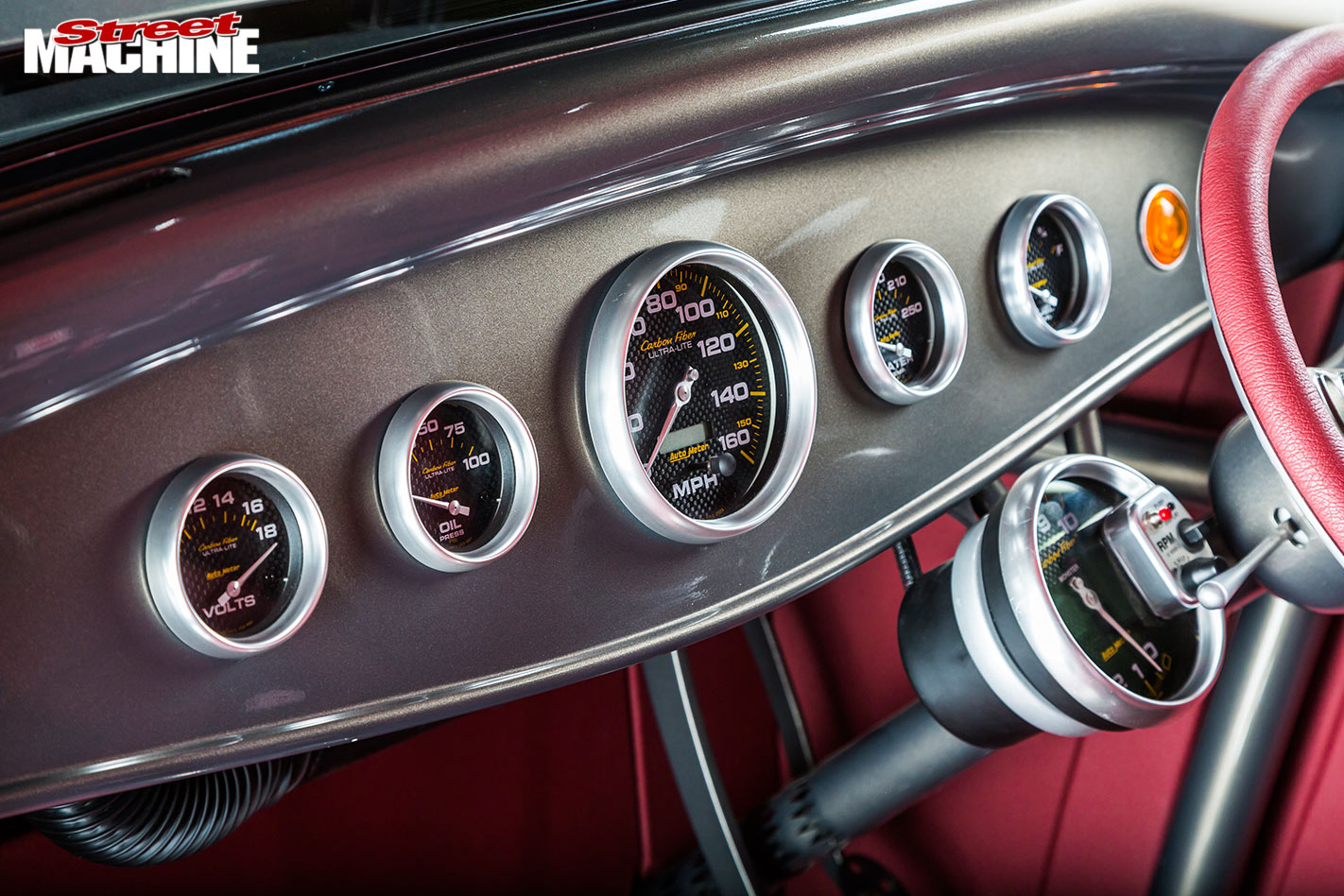 On the subject of more than enough grunt, you might be surprised to learn this is Chris’s first blown car – what a way to pop your cherry!

Chris’s thoughts? “It’s got a lot of power; it’ll get away from you real quick. I haven’t stood on it yet. After tuning it, Jake from Jake’s Performance gave it a quick stab and it instantly blazed the tyres. I said: ‘Ooh, Christ!’ I’m working my way up to it.” 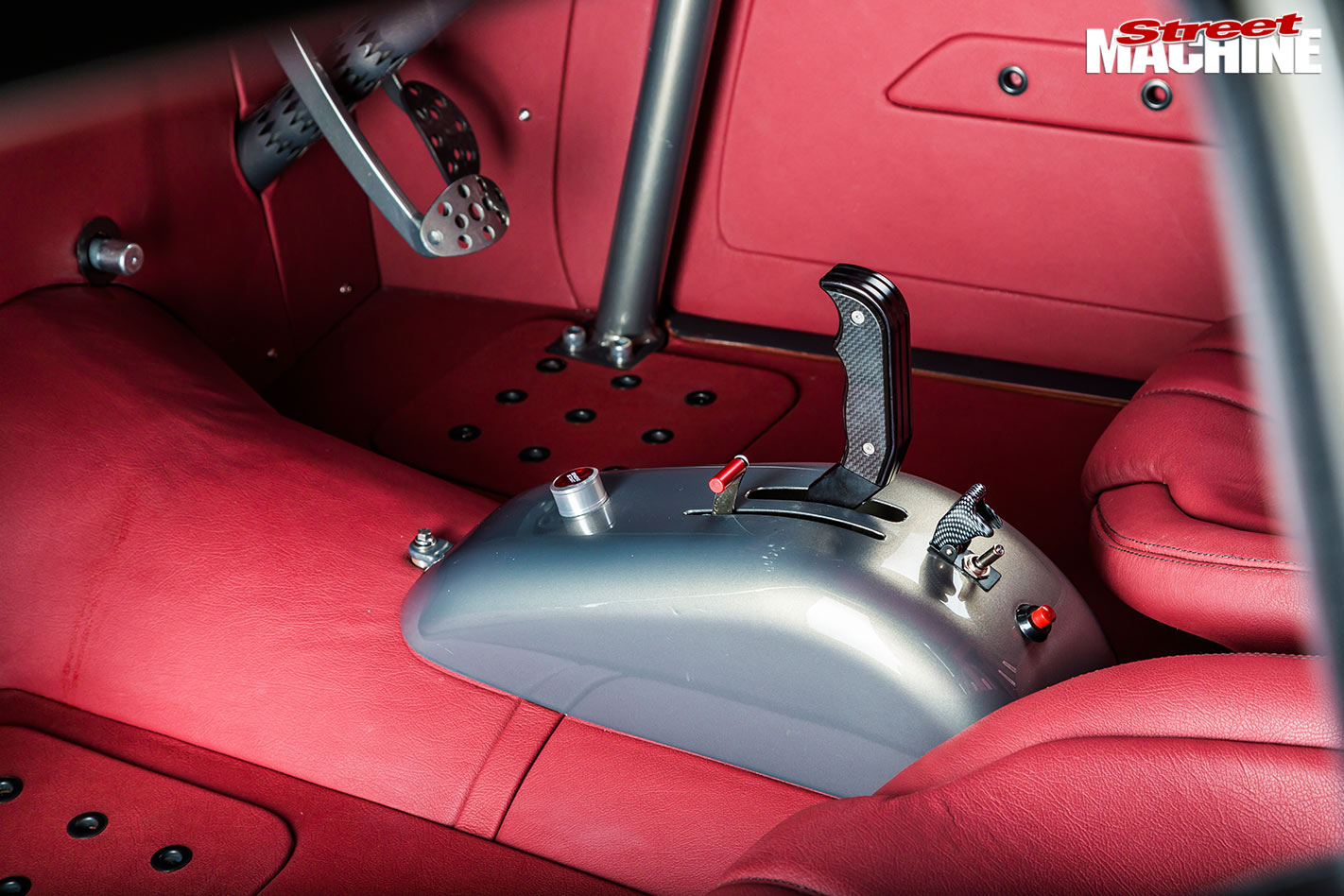 So what does the future hold for Hemi Deuce?

“Everything’s for sale at the right price,” Chris says. “If I did sell, I’d build a tough pro tourer. Otherwise I’ll just enjoy scaring the crap out of myself with this.” 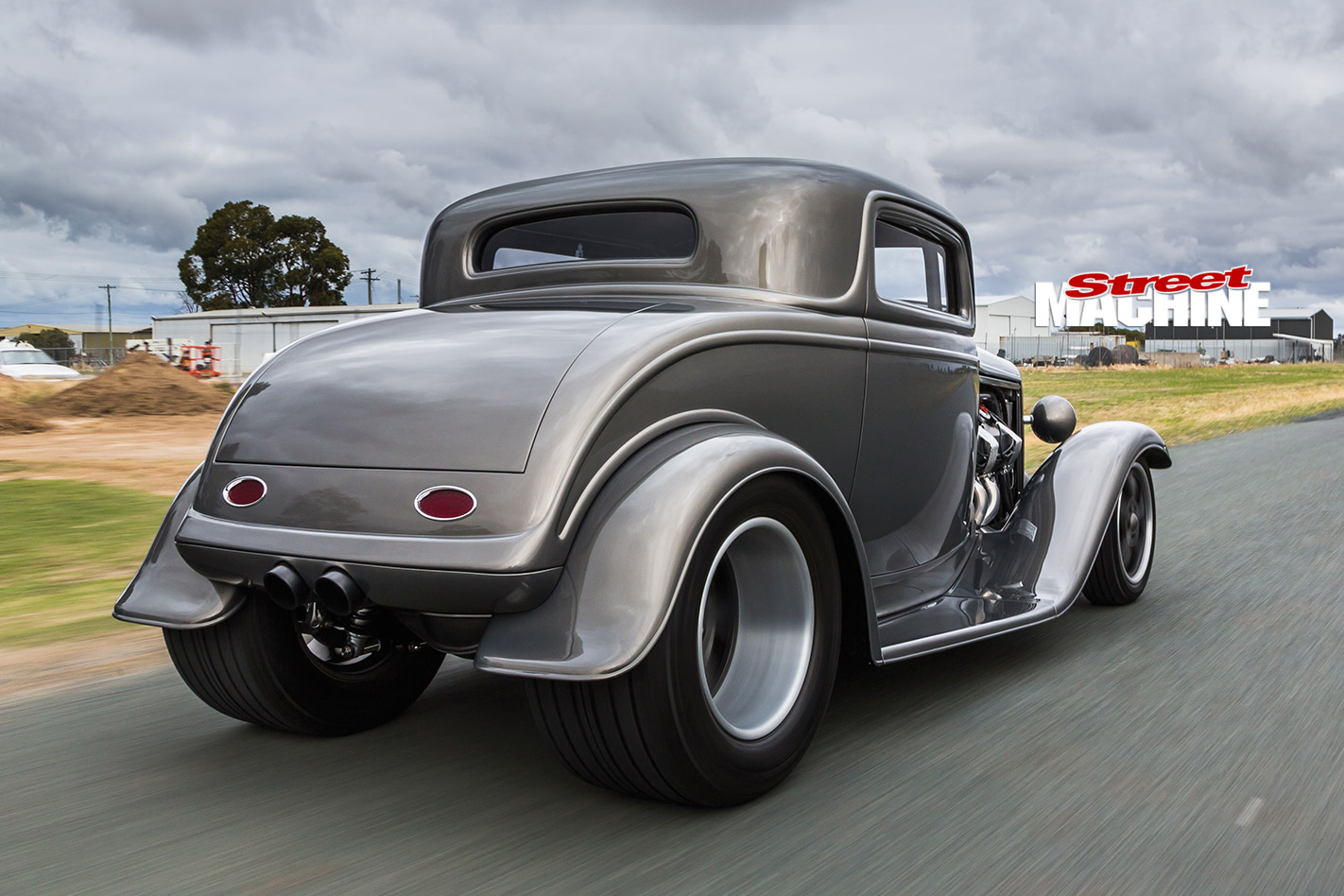 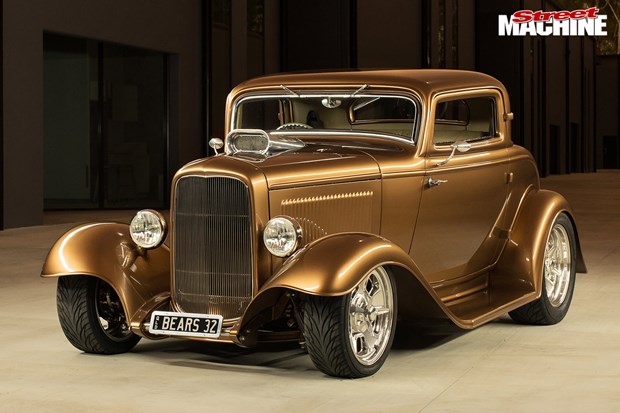 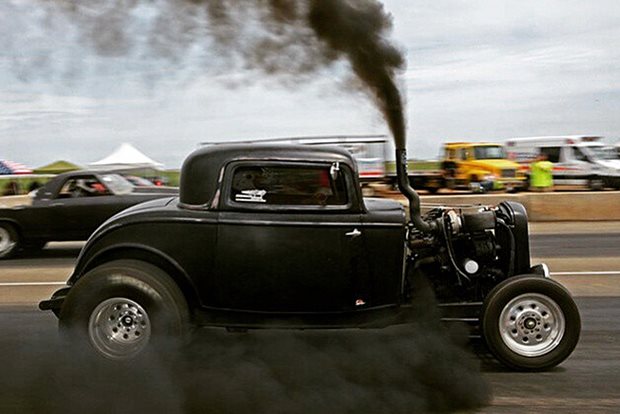 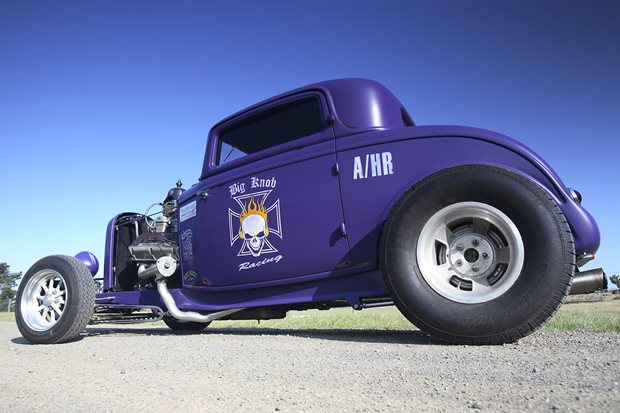