If you want to get a reaction from the crowd, tear your car apart and start over

RECOGNISE this car? You’re doing well if you can because since it made the Elite Hall at Summernats 13, it’s undergone more surgery than Robocop. 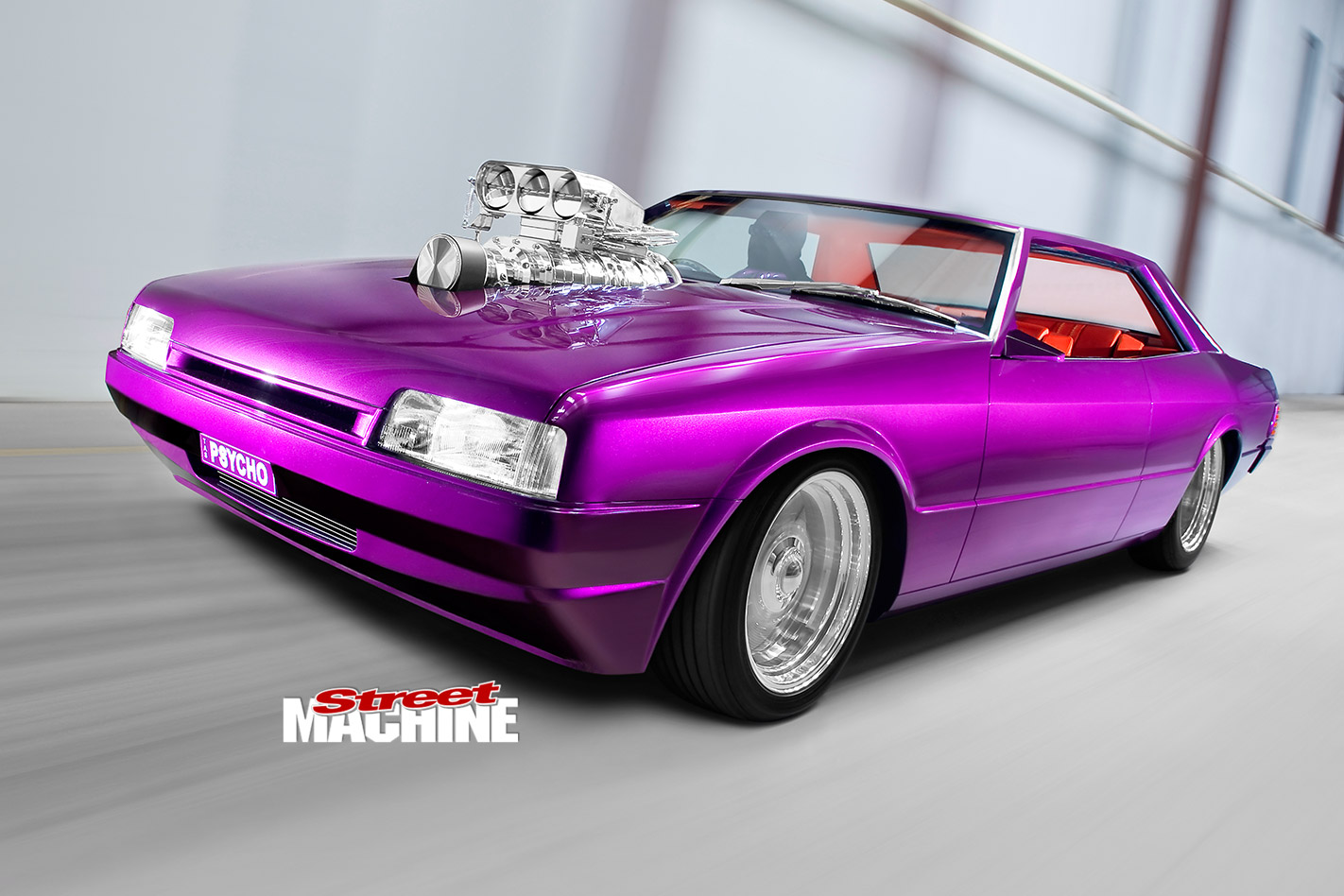 Back then, the machine that Tasmanian Ford fan Leisa Chinnock bought from her employer after years of faithful service as a gunmetal grey company car, had been painted pink and worked over enough to make the Top 20 and scoop Top Sedan (SM, May ’00). Not bad, but Leisa and husband Shane wanted the ‘Wow!’ factor. 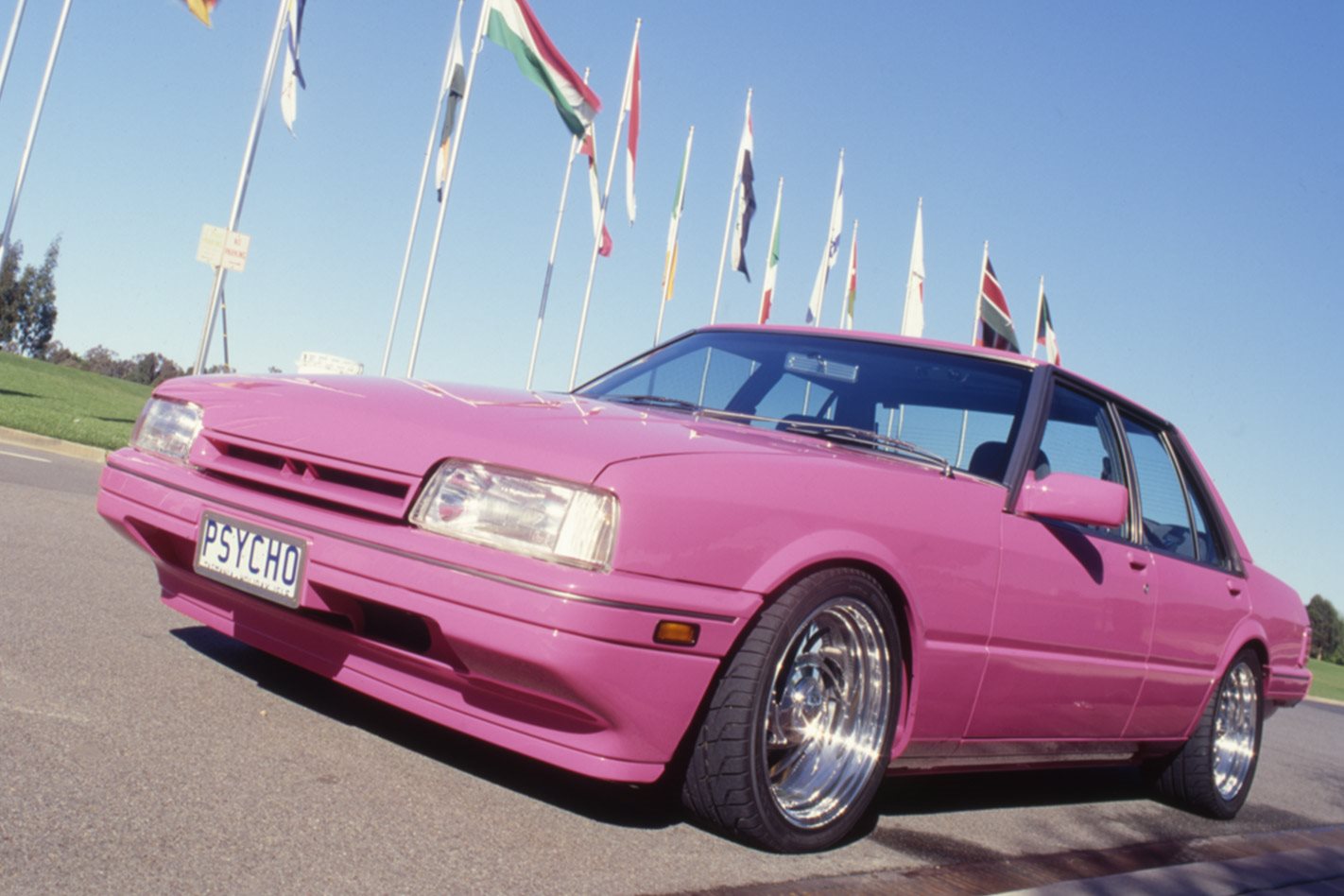 “We weren’t happy with the way the car went at earlier shows. We wanted a chop top, suicide doors and a flat floor,” Shane says. “We wanted it to have more impact.”

They turned to Greg Maskell at Maskell’s Customs & Classics who’d impressed them with the work he’d done on Trent Brennan’s Capri (SM, July ’02) and wowed thousands more with his contributions to Gary Myers’s Silver Bullet (Sept ’04). 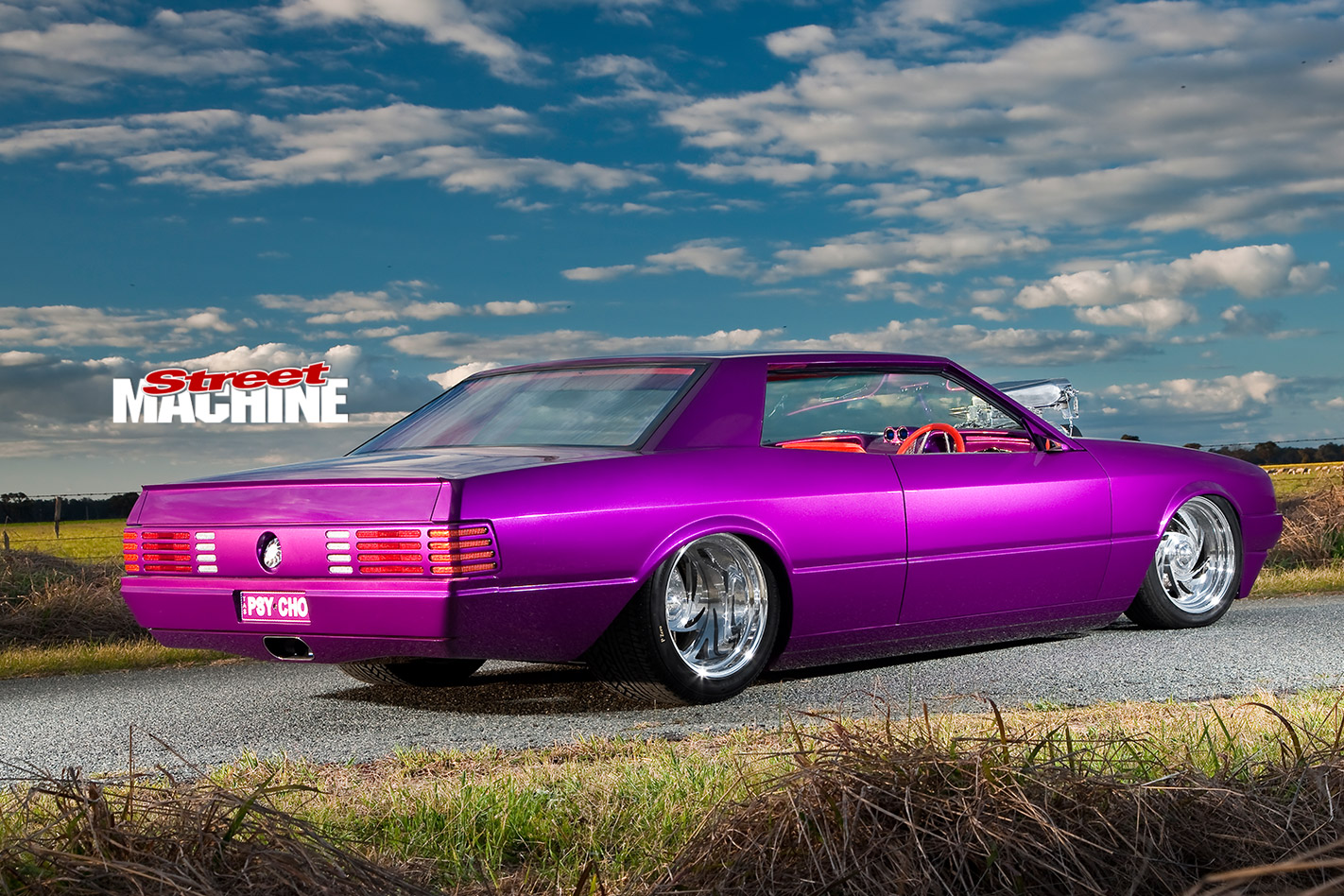 Rims were carried over but widened 5in. The rear bodywork was almost entirely reworked, with new steel bumpers, beaver panel and a smoothed boot with integral spoiler. Retaining the XF tail-light grilles was essential for the car’s character but stock lenses are illuminated by LEDs in plastic mounts

"We were in the same motel at Summernats 2000, got talking and we’ve been mates ever since,” Greg says. “A couple of years later, Shane saw the Passion Purple paint on Trent’s Capri and told me: ‘You’re going to paint our car that colour.’” 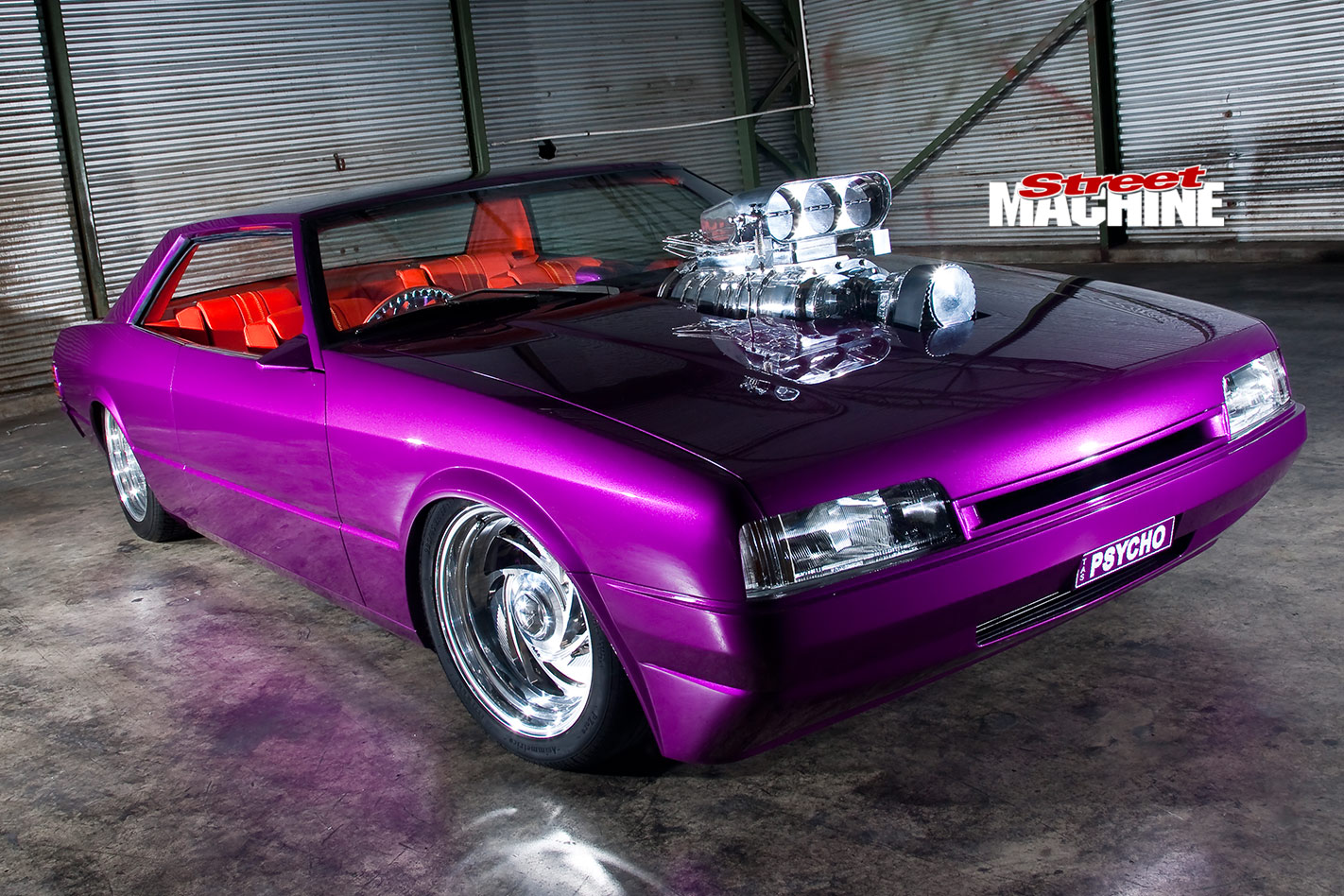 However, like the good guys always are, Greg was booked out for a year so they decided to get a local Taswegian to perform the initial fabrication, with Greg acting as project manager and taking over the job of finishing the car when his schedule freed up. And just seven years later, here we are!

“The first guy chopped it up and it sat there for four years,” Greg says. “Then Anthony Wilkins took over and got stuck into it. He chopped the top, did the two-door conversion, built the chassis and the suicide doors.” 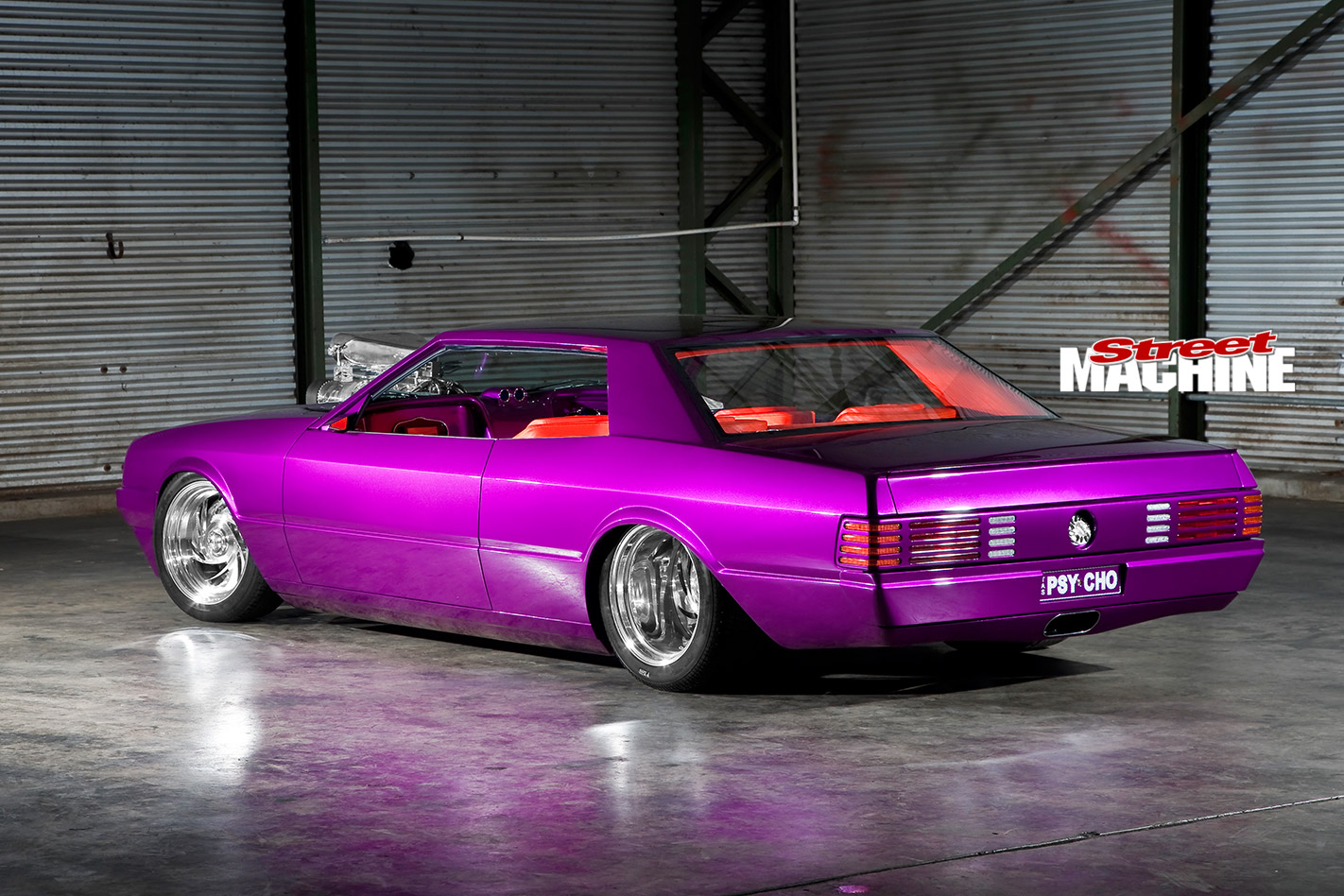 With the body packing a swinging boot, bonnet and doors, it was shipped to Greg’s workshop in Shepparton, Victoria. But with Shane and Leisa based in Tasmania, there was still a lot of interstate collaboration. Hobart boy Dave Webb did a lot of billet fabrication work and fellow Hobartian Chris Tanner knocked up the gorgeous exhaust. Surely on a build of this scale, that would have made things tough?

“It was a bit awkward at first,” Greg says, “but we got into a rhythm. For all the billet pieces Dave made — such as the boot and bonnet hinges, the fuel cap and the speaker grilles — I’d either make a drawing or post down a template for him. It worked pretty well; distance doesn’t matter when you have good people on the other end of the phone.” 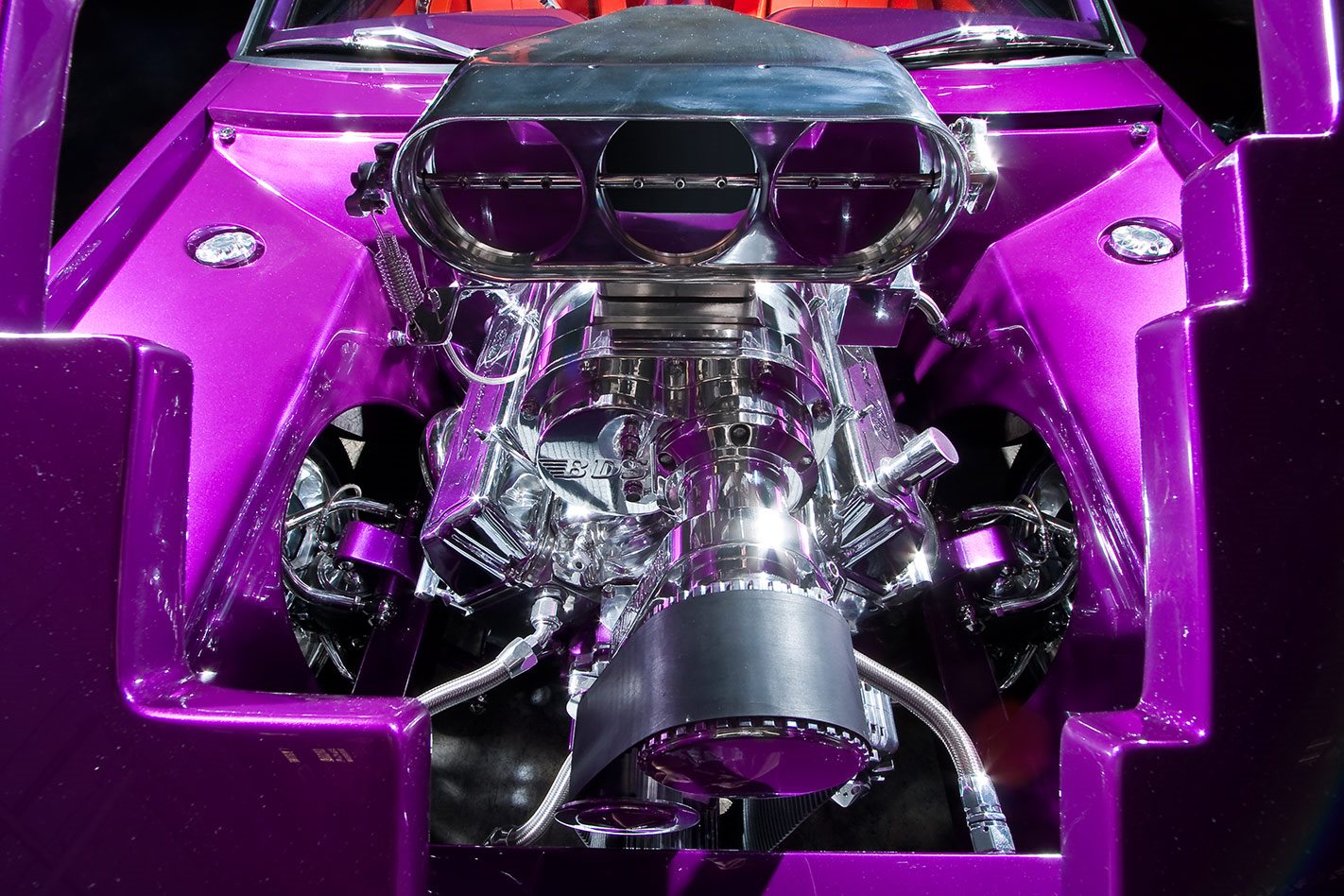 The reverse-opening bonnet and boot are operated with linear actuators controlled by the car’s elaborate computer system. Press a button on the key fob and voila! 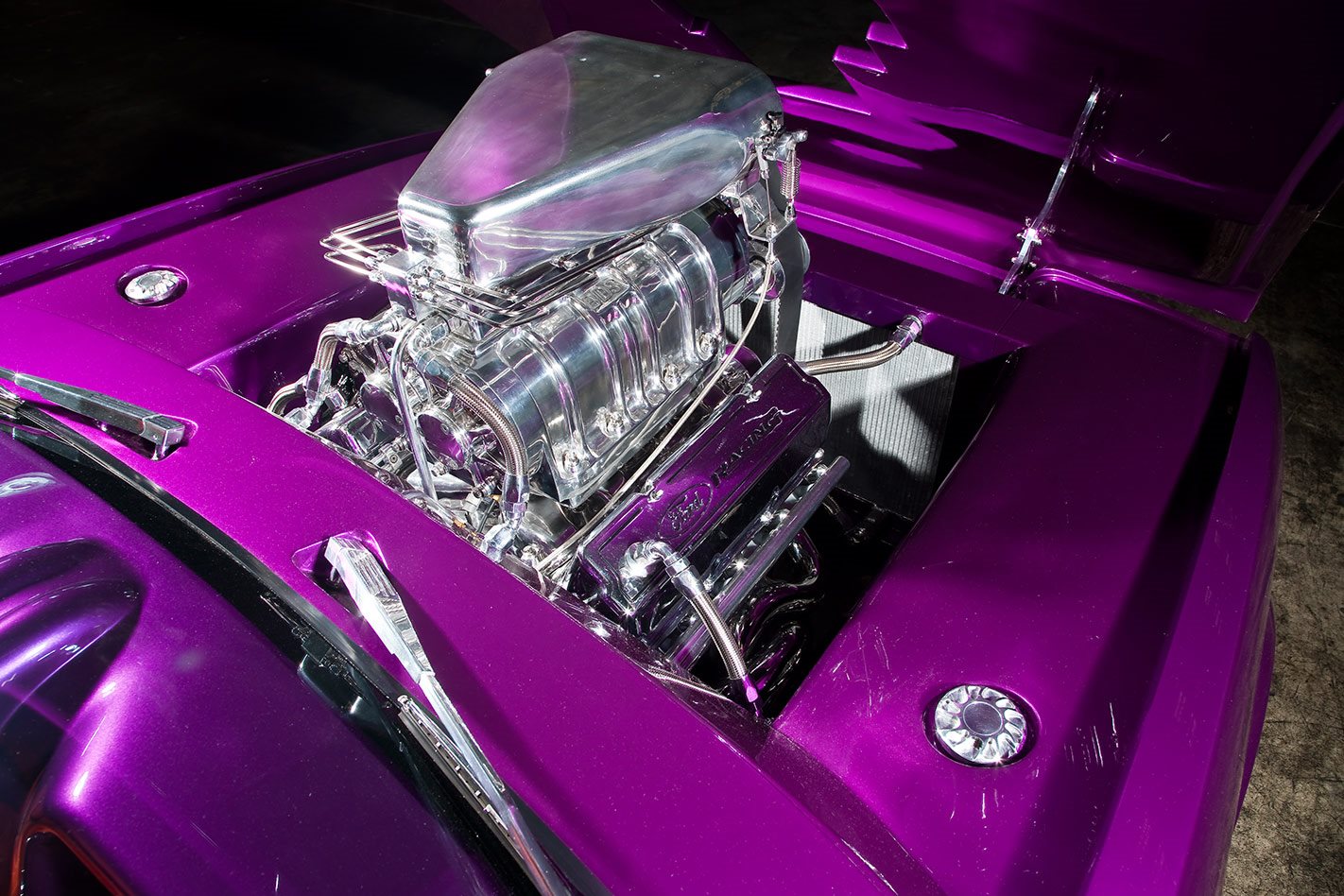 “The grille is narrower and longer, the bumpers are steel, the tail panel is one piece instead of two. Where the exhaust pipe comes out, the floor pan where the exhaust is, the bumper bar, headlight extensions, the cowl modifications, the mirrors, custom glass, electric actuators for bonnet, boot and doors — it’s all new.” 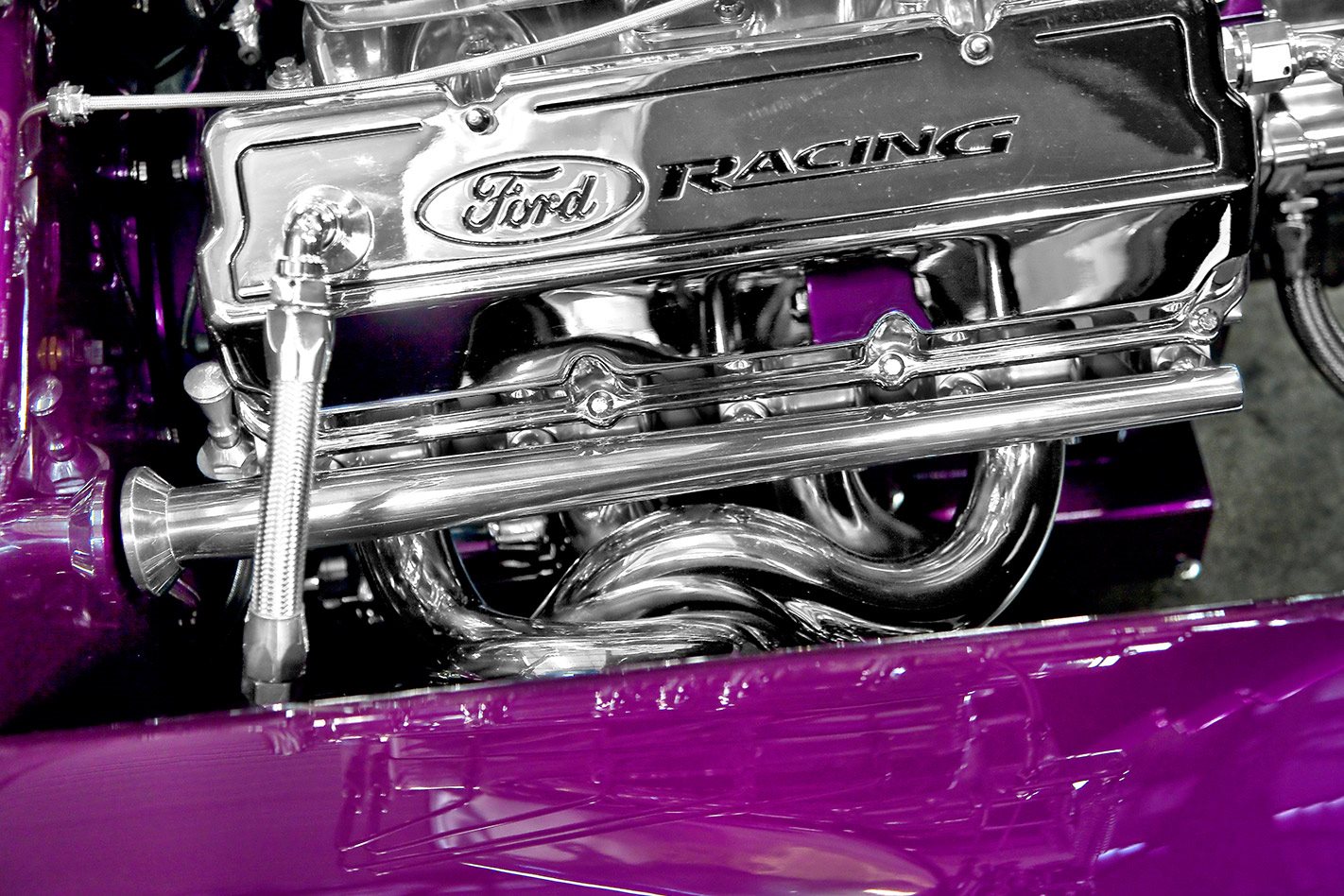 Equal-length extractors by Chris Tanner are things of beauty. The silver tube that clips to the head is a cover for the ’plug leads, which go through the firewall to the coil packs that are hidden under the dash

While they were at it, they made the car as smart as it is sexy. Greg got hold of Shepparton computer whiz Gary Lomer, who usually designs software to control industrial machinery, to create a touchscreen system akin to an iPhone so they could eliminate manual buttons on the dash. What he came up with is revolutionary. 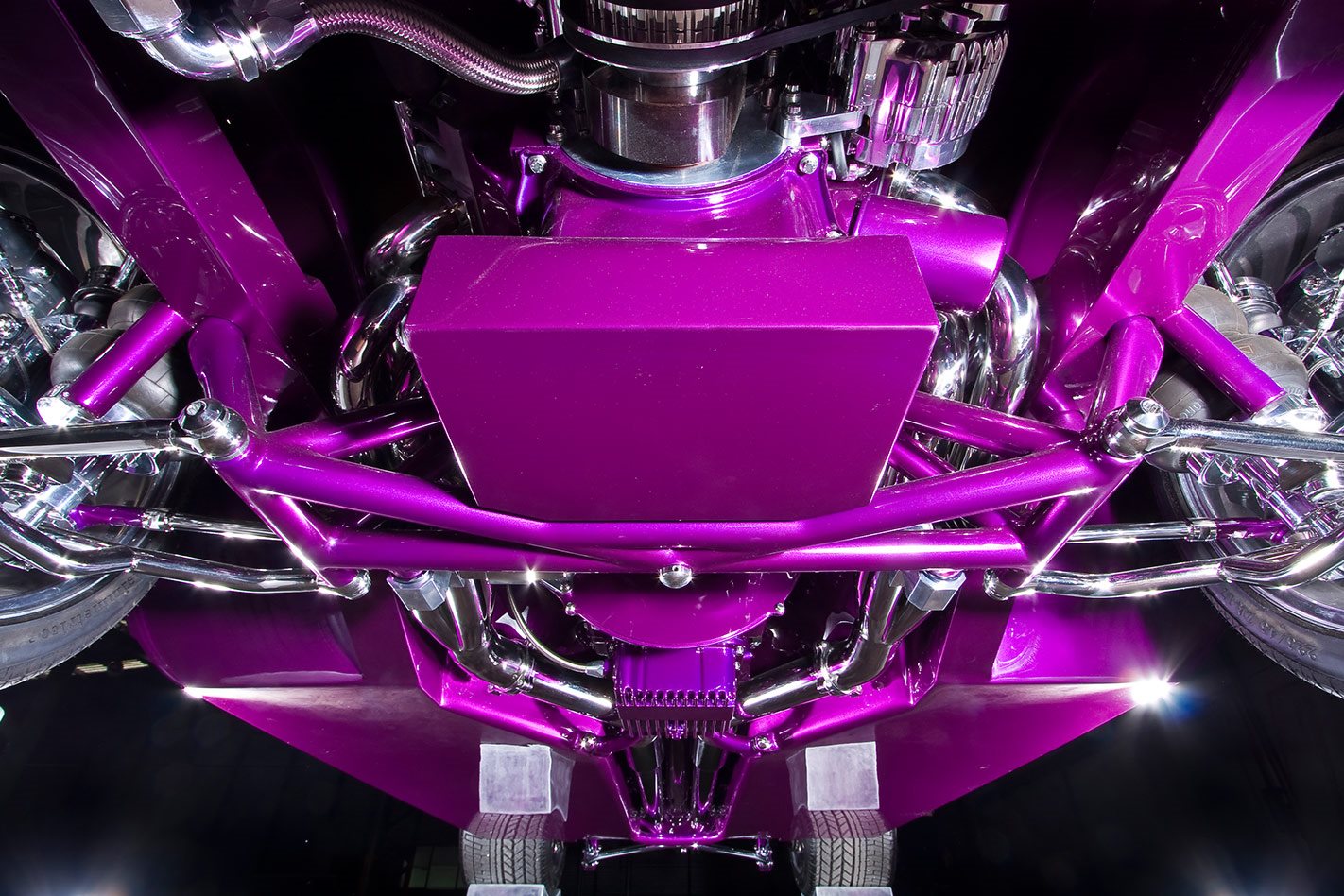 Check out the custom front crossmember and details under the car, such as the neat alternator bracket

“It opens and closes the doors, boot and bonnet, controls the airbags, starts and stops the engine, and it can control the thermo-fan and water pump, lights and windscreen wipers,” Gary explains. “It’s wireless so you can log on to websites and there’s potential to do engine diagnostics. You can operate a lot of it from a key fob but we wanted to keep it fairly simple to start with.” 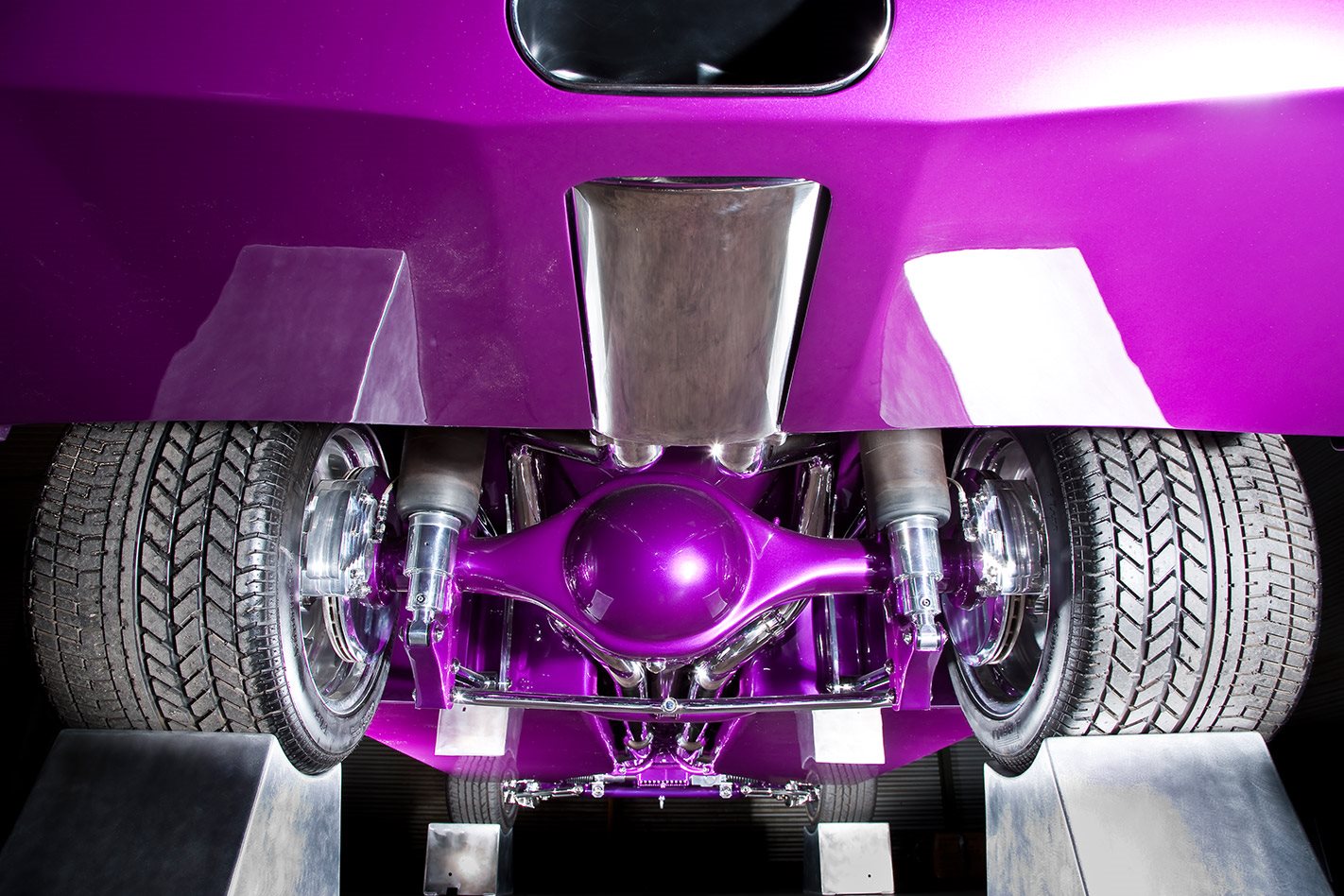 The flat floor flows seamlessly into a new beaver panel that features a neat recess for the exhaust. Single-exit exhaust looks simple but with the rear pan angling up at 45deg, it took three full days to fabricate

This is groundbreaking street machine technology but Gary says he can do so much more with iPhone connectivity and engine tuning. That’ll come in handy controlling the supercharged tower of power that fulfils another of Leisa and Shane’s requirements. 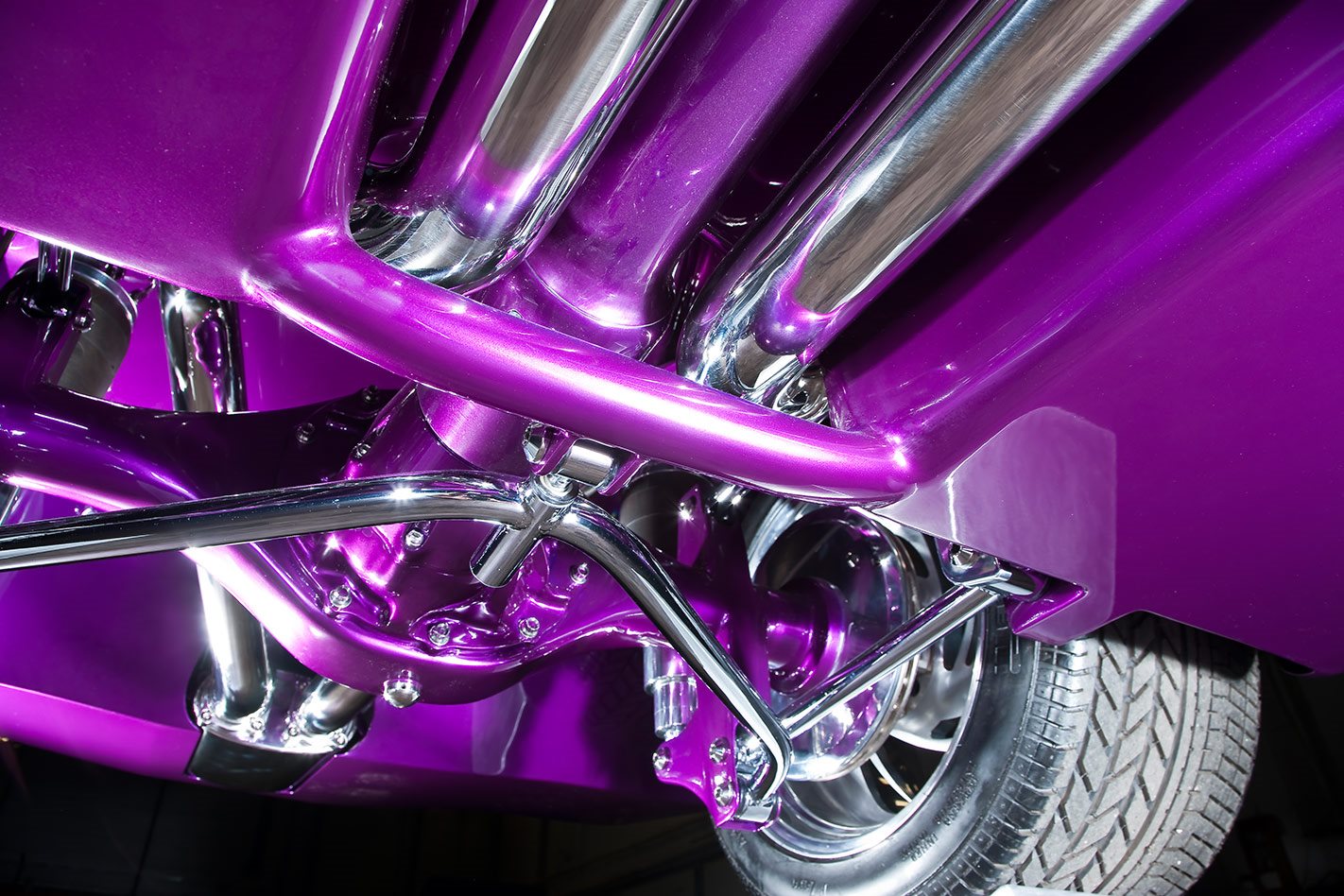 Where’s the universal joint? Hidden unis were built by Adam Tremlon to Greg’s design. The wishbone-shaped sway bar will be changed to a stronger design before the car does too many miles

“We wanted a supercharged car and thought we’d go a bit different with the 8/71 rather than the 6/71 that everyone else goes for,” Leisa says.

They collected all the parts then contacted Dennis Cooper in Hobart to put it all together. He’s a real Ford man who builds engines for the touring cars in England. 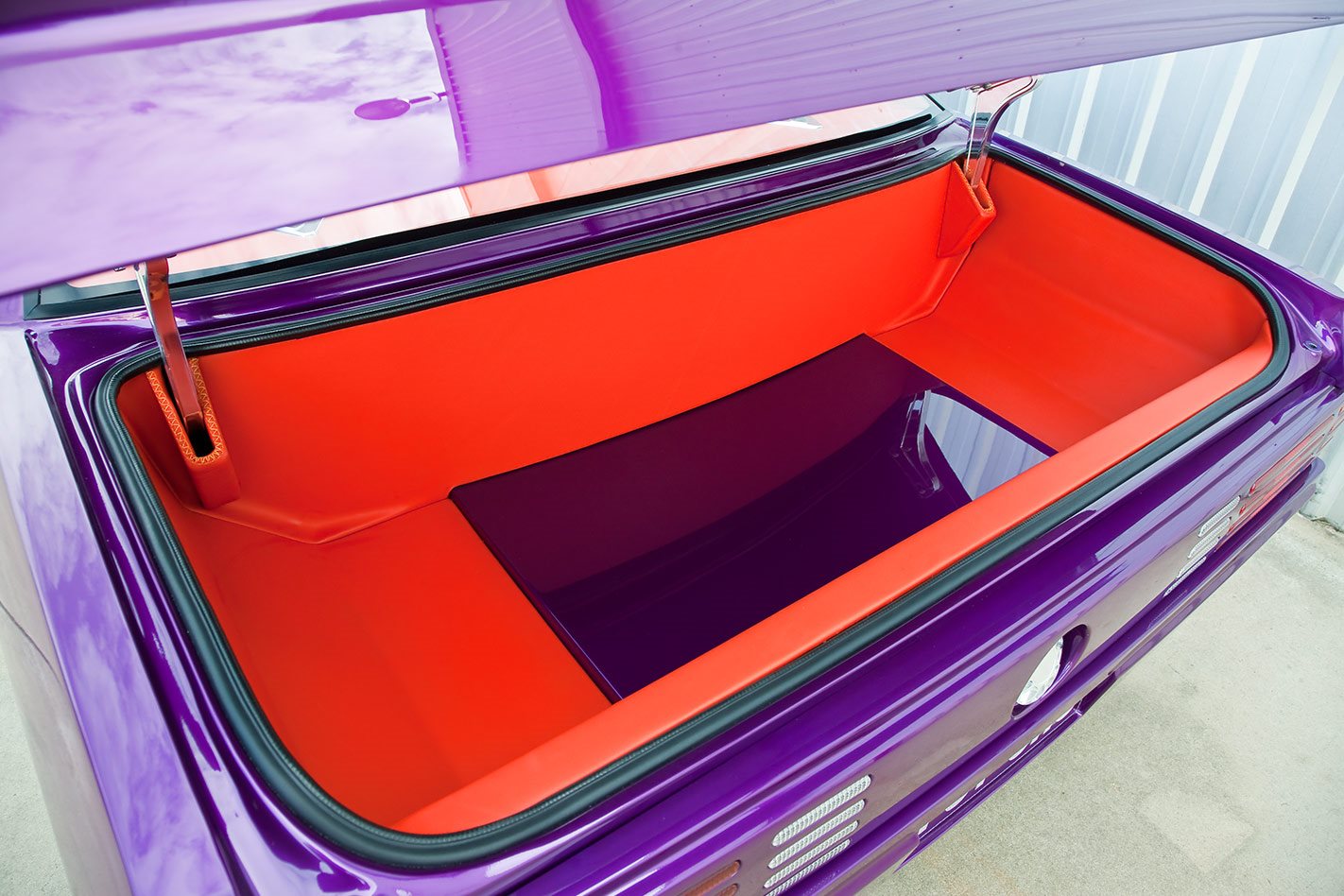 “We had it on the dyno a few weeks ago and we took it to 5000rpm, where it was making 605hp with 7psi — that’s the street tune,” Shane says. “That’s all we need. We wanted to make it nice on the street; we’re not racing it or chasing horsepower. Maybe one day we’ll put it down the track but it wasn’t built for that purpose.”

The purpose was to wow people at shows and going a long way to achieving that is the incredible interior stitched by young Michael Carter, a part of Greg’s team. 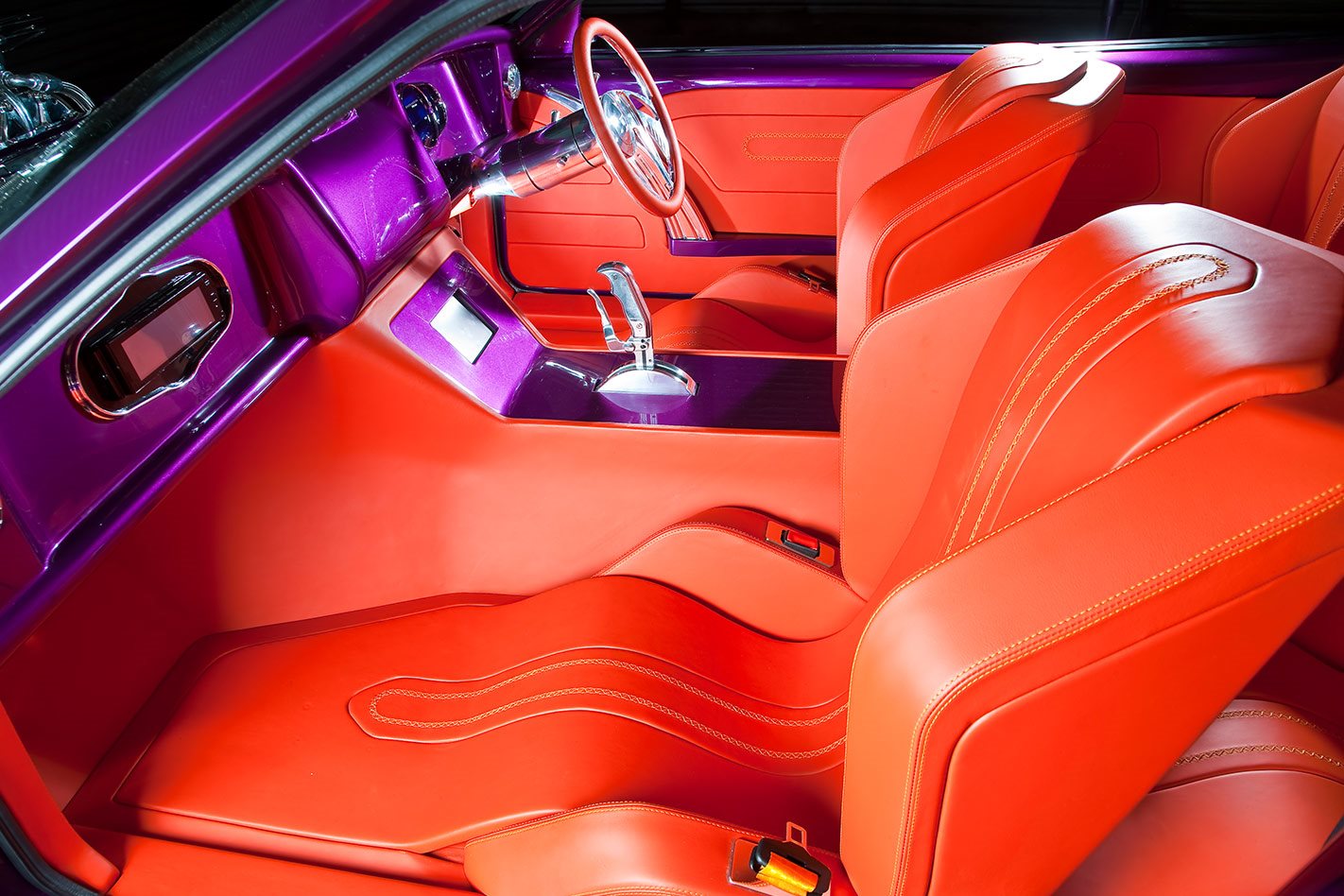 “He’s got a mind that’s continually coming up with different things and we were very pleased with what he did,” Leisa says. “He even came to Hobart to talk though what we wanted. Being so young, he wasn’t what we were expecting but he had a look at the car and brought samples of what he thought would look good and we were guided by what he recommended. We just said that with the roof chopped we wanted the seats low so it wasn’t too ‘over dimensional’ — we wanted a kick-arse interior.”

A look over the custom seats covered in luxurious German leather is enough to tell you that’s another box ticked. 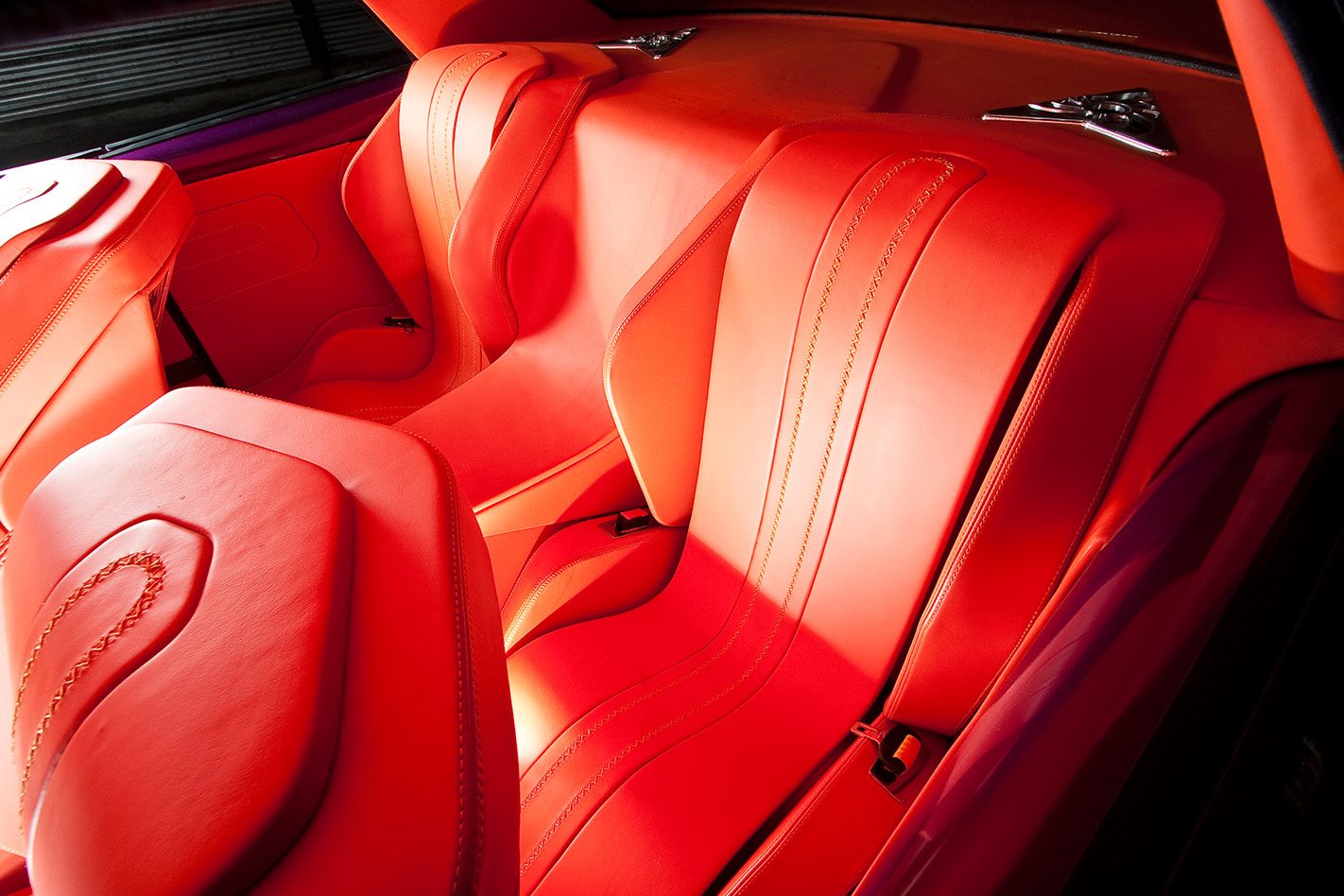 Leather-trimmed seats look like something that might be fitted to the first class section of the next space shuttle, flowing out of the floor boards and featuring integrated aviation belts

With MotorEx fast approaching it was time to consider paint and Shane started to second-guess the Passion Pearl, making Greg anxious. “Three weeks to go and we hadn’t worked out the colour, so I rang him up and said we had to do it. His first thought had been Passion Pearl so we ended up going with that. I tweaked it a bit and had to make up a name for it. I figured he had finally Made A Decision — MAD — so we called it Mad Passion. It really suits the car.”

The unveiling at MotorEx justified the seven-year build and it earned a Gold Champion award for that stunning interior, with Bronze for bodywork. 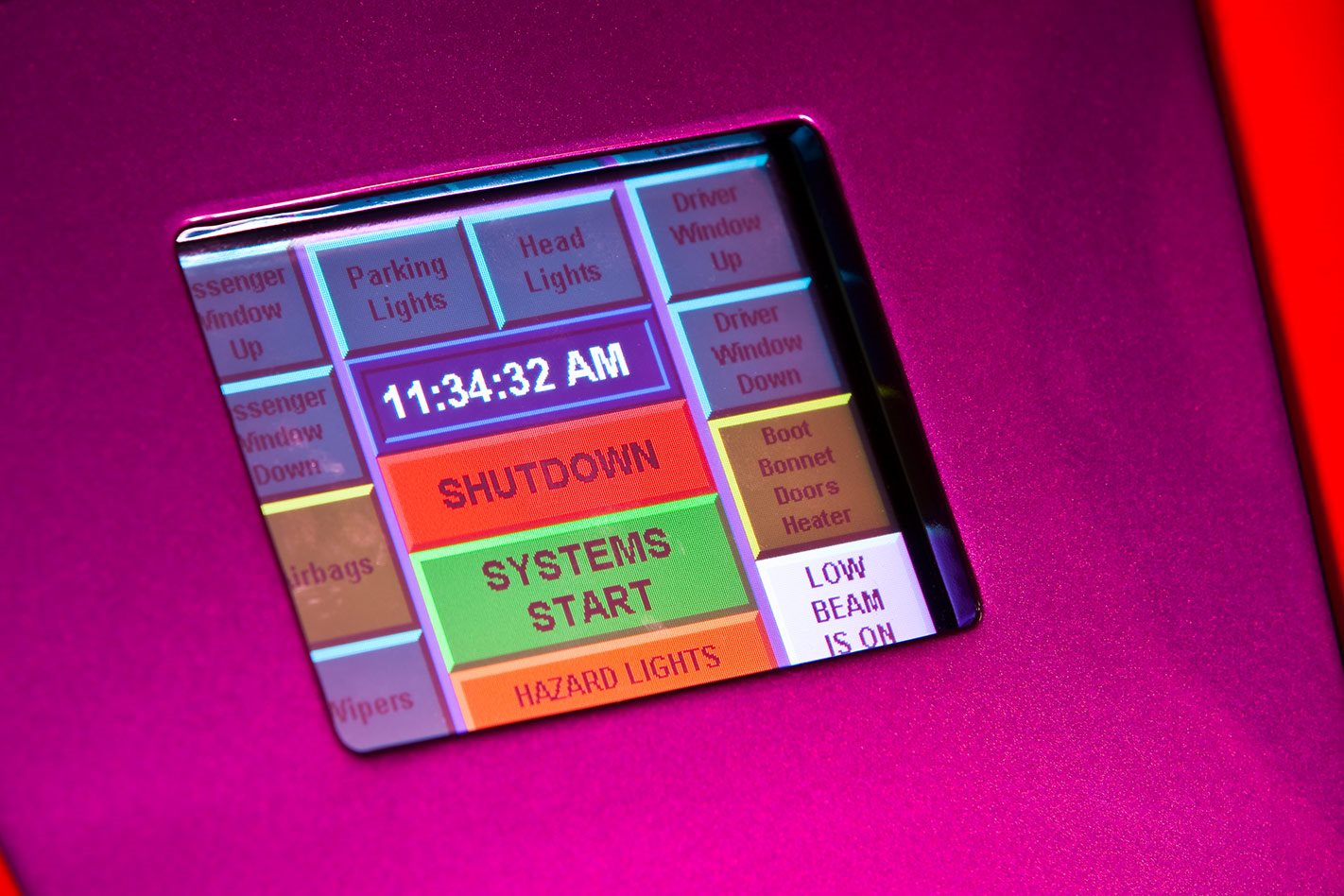 “The reaction at MotorEx was great,” Leisa says. “We said we wanted the wow factor and that’s what we got. My mum wanted to punch someone for saying it was just an XF but others said it was the way they should have been made.”