BLOWN AND INJECTED 2003 FORD BA FALCON XR8 - IN THE BUILD

WHAT do you do when you’re a 17-year-old second-year apprentice welder and you just have to have a V8? You buy a near-new BA XR8, of course! Well, that’s what Brent Tanian did, at least. But he also had access to a private burnout pad in his hometown of Collie, so it wasn’t long before the big-end bearings in the Falcon’s stock engine decided enough was enough. 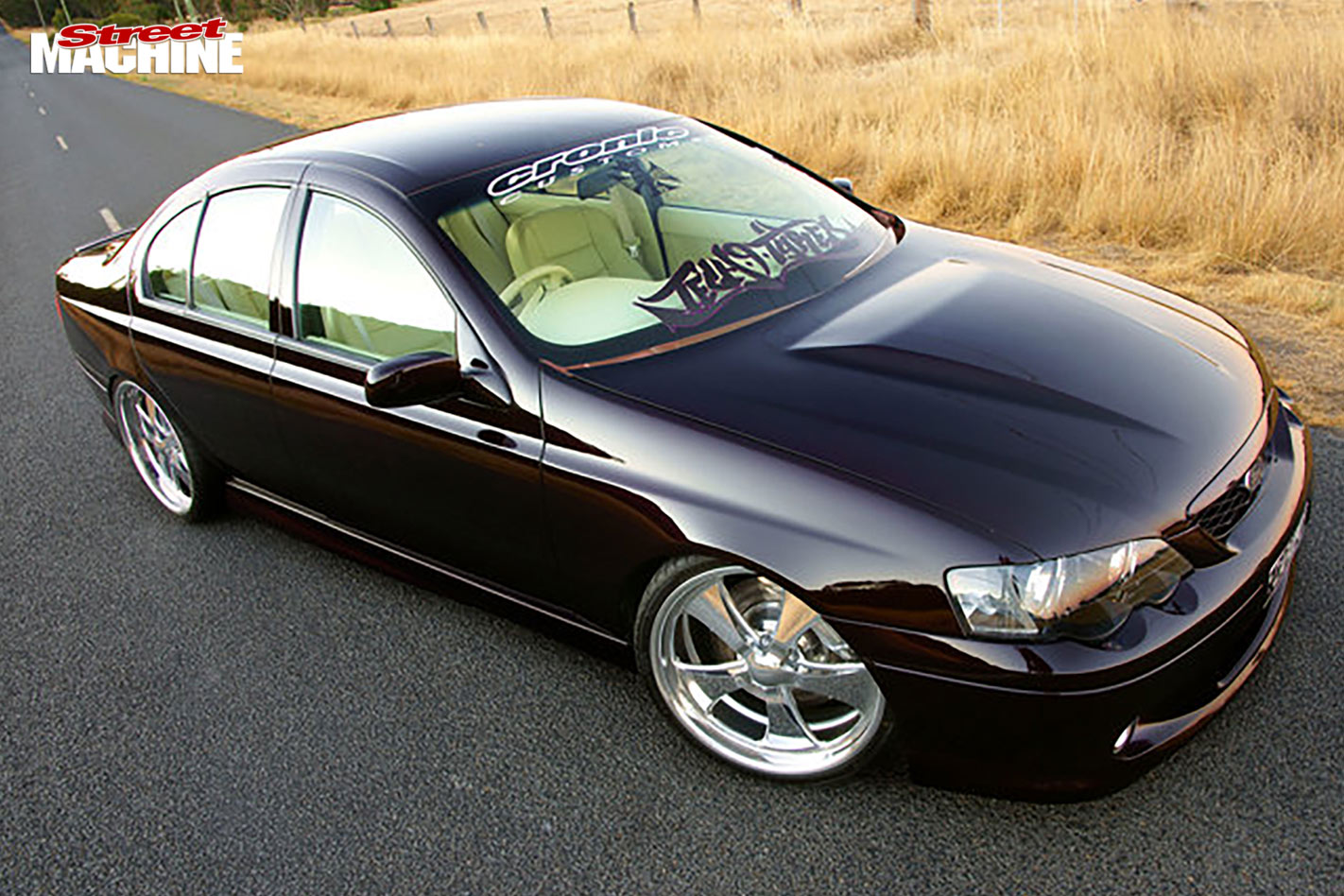 The XR8 in its guise as a tough and slick street car, complete with built Boss 260, custom paint and trim and slammed down hard over a set of 20in Budnis

The fix was to toughen up the Boss 260 donk with forged internals, lots of polished bits and slam it on the ground over a set of 20-inch Budnik Fontana rims. “That build took eight months, and was a really nice street car that only did two shows – Motorvation and the first Gazzanats WA – and picked up some trophies,” Brent says. “But straight away it was time to change it up, so it went to Cronic Customs for a nine-inch, mini-tubs, ladder bars and a Turbo 400.” 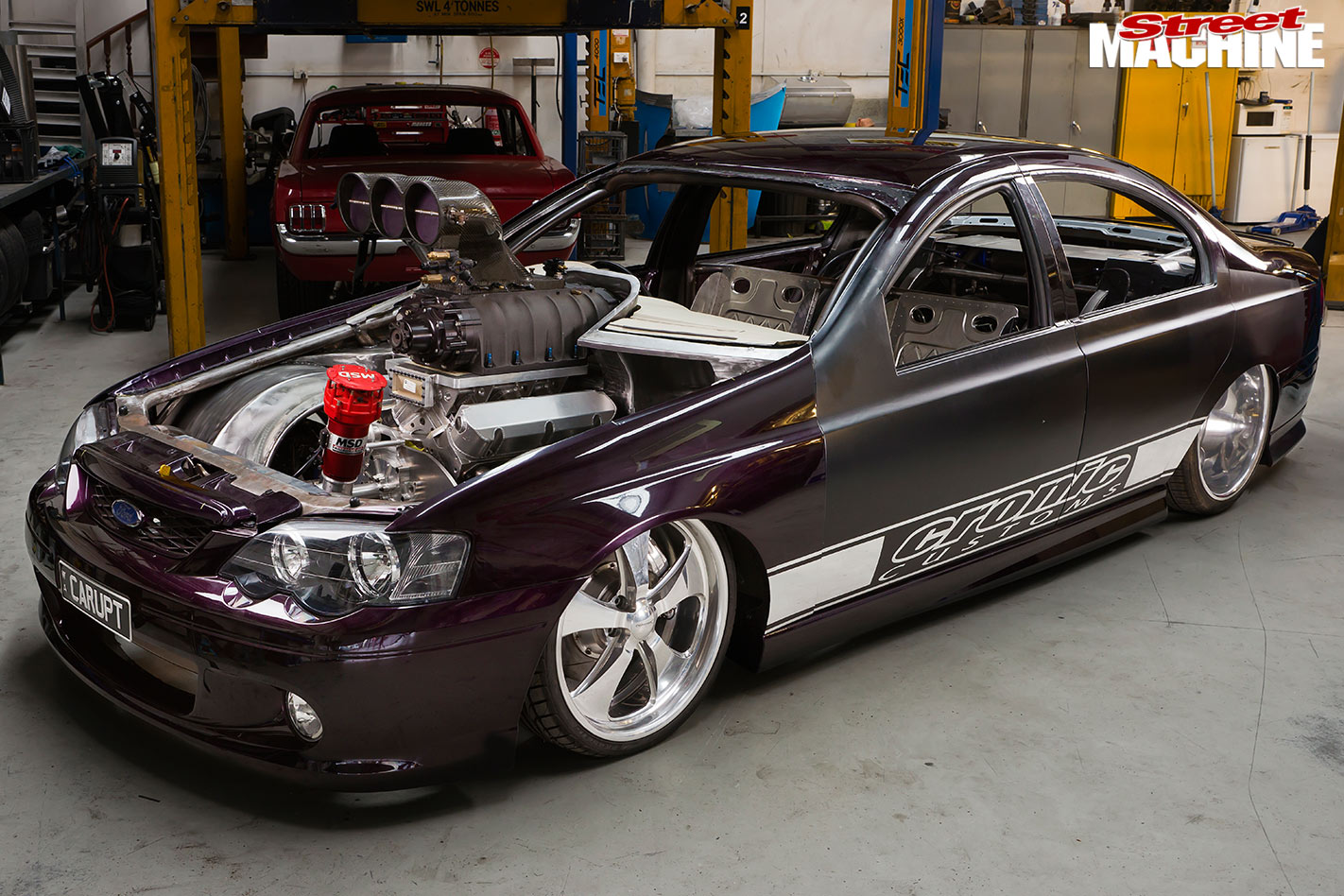 As you can see, the motor has been set back quite a bit, which meant cutting into the windscreen. Five screens were sacrificed before they managed to cut one without cracking it

Brent admits that for the first 12 months of the current build he didn’t have any clear plans, so things stalled for a while. Then he started talking to George Separovich from Blown Motorsports: “Originally I wanted an EFI blown Windsor on pump fuel that would make around 750hp, that I could lap around the streets,” he explains. “That got completely screwed up after a couple of months of talking to George – all of a sudden it was an 8000rpm, 1200hp methanol engine. Then he told me about the 14/71 high-helix Kobelco blower he had off his race car that only had five passes on it.” 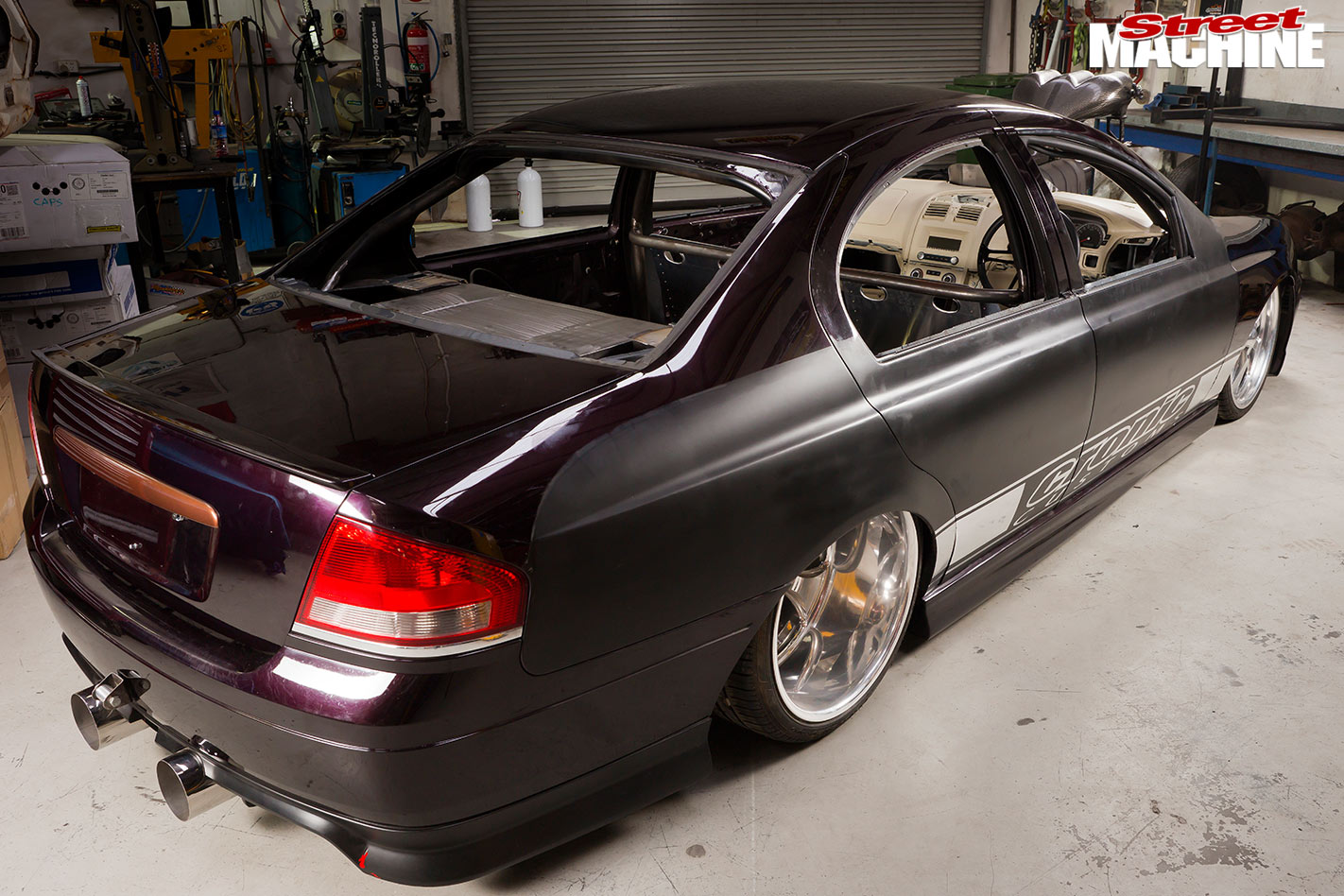 Brent hadn’t decided on a colour yet or what he was going to do about the side mirrors. He was considering reshaping the door opening and getting custom-made side glass

That race car was George’s blue AA/AP LJ Torana, and those passes were as quick as 6.32@226mph! This is the point where you could say things got a little out of control. 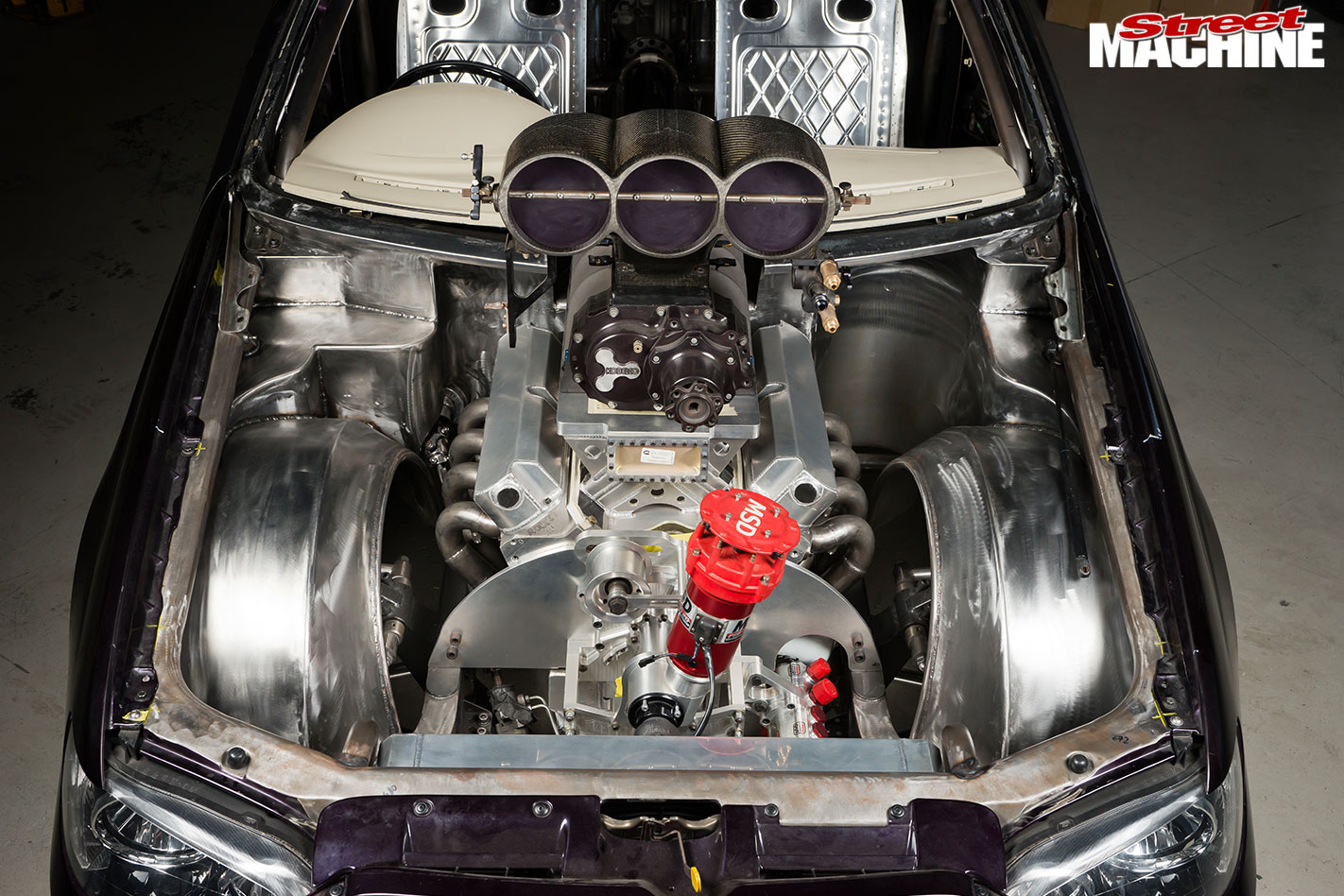 The blown small-block Ford may have small cubes but it’s big where it counts. That’s a Kobelco 14/71 race blower with a carbonfibre injection hat up top; more than enough for 320ci

With the amount of horsepower and rpm the new engine was going to be capable of, Brent gave Adam Spiteri and his team at Cronic Customs the go-ahead to put the car on the chassis table and cut it to bits. 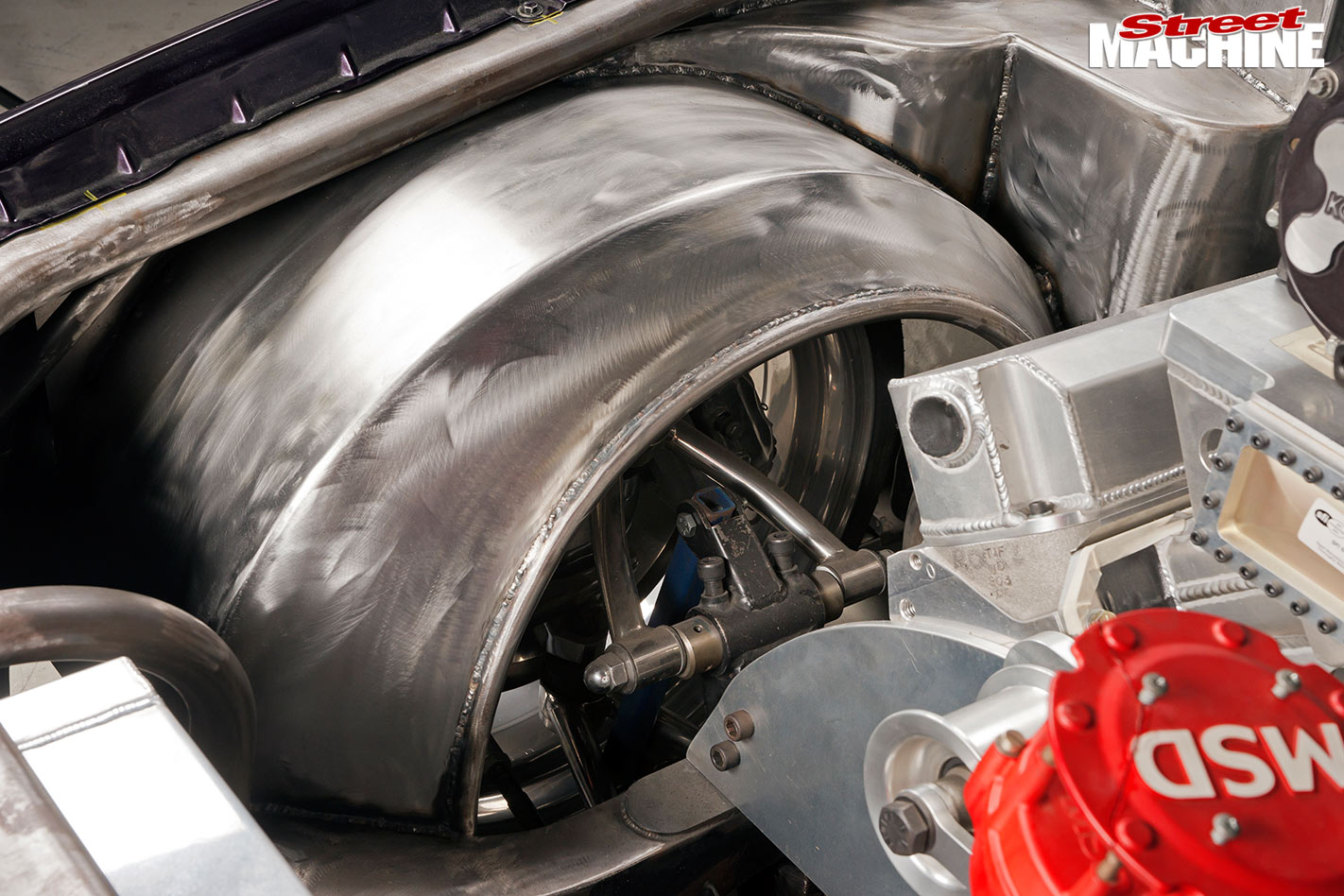 It’s now got a full chassis, a fully braced nine-inch, TCI double-wishbone front end and – for something different – no airbags. How the car sits in these pictures is its actual ride height, and to make sure it can turn those big 20x7 front rims, the Falcon’s track has been narrowed 80mm. And to keep all of Brent’s Holden mates happy, there’s a VE Commodore rack-and-pinion up front – well, what’s left of it. 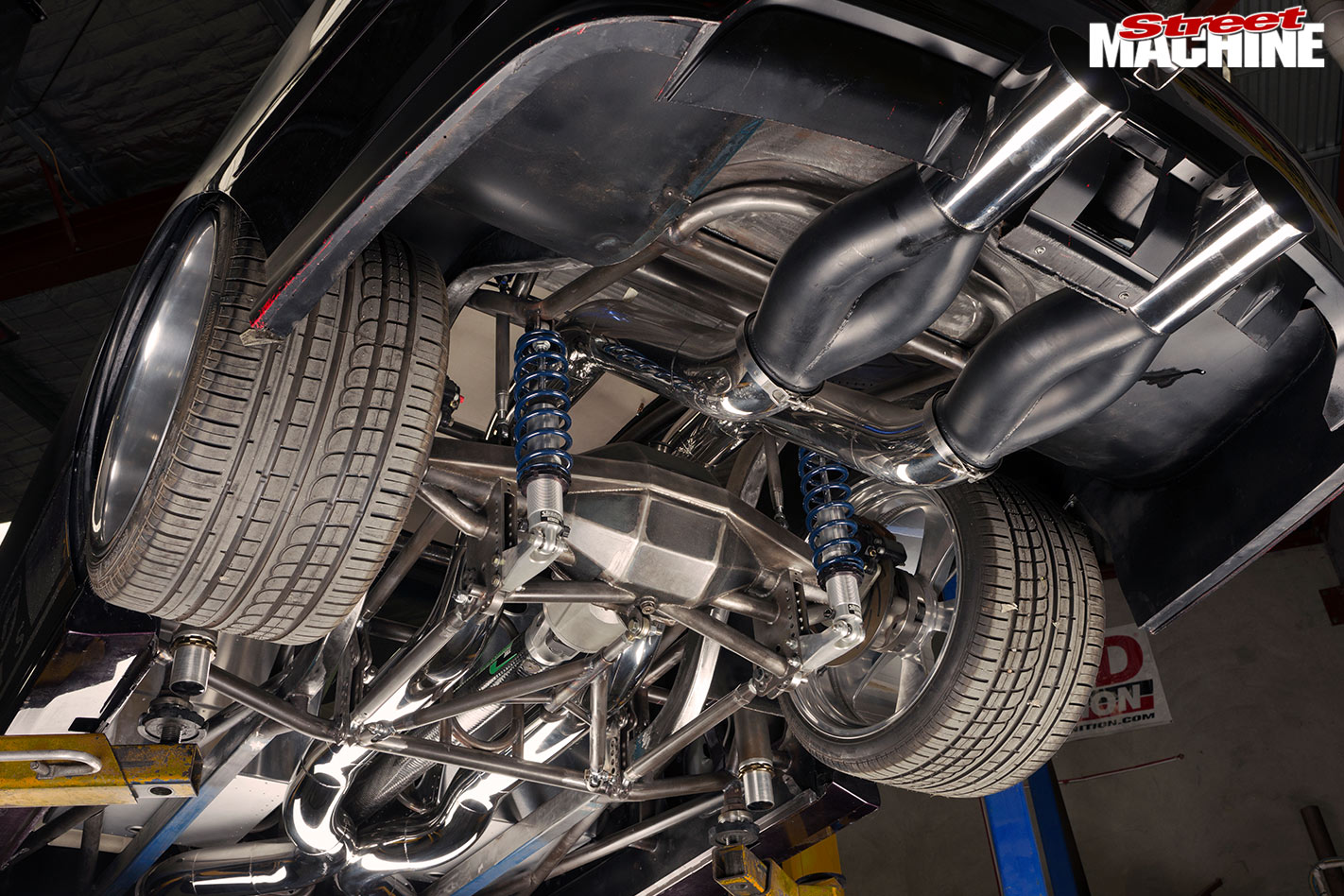 Lots to see here: that massive 9in that’s braced better than the Harbour Bridge; the enormous 5in pipes; and those Gonzo race mufflers that will attempt to shut up 1200 or so horsepower

While the original ‘streetable’ version was going to be a 427ci Windsor, George loves the revs, so the ‘big’ engine is just a little 320-cuber. It’s got a couple of Brodix CNC Track 1 heads on top, plenty of good stuff inside, a Peterson dry sump and a 20A MSD magneto. The carbonfibre hat and blower sit on top of a custom-made sheet-metal intake, and at the other end of the combustion cycle, a set of custom 1.875-inch to two-inch stepped extractors feed into twin five-inch exhausts! The only attempt at shutting it up is a couple of Gonzo race mufflers right at the back, so you’ll definitely hear this car coming. 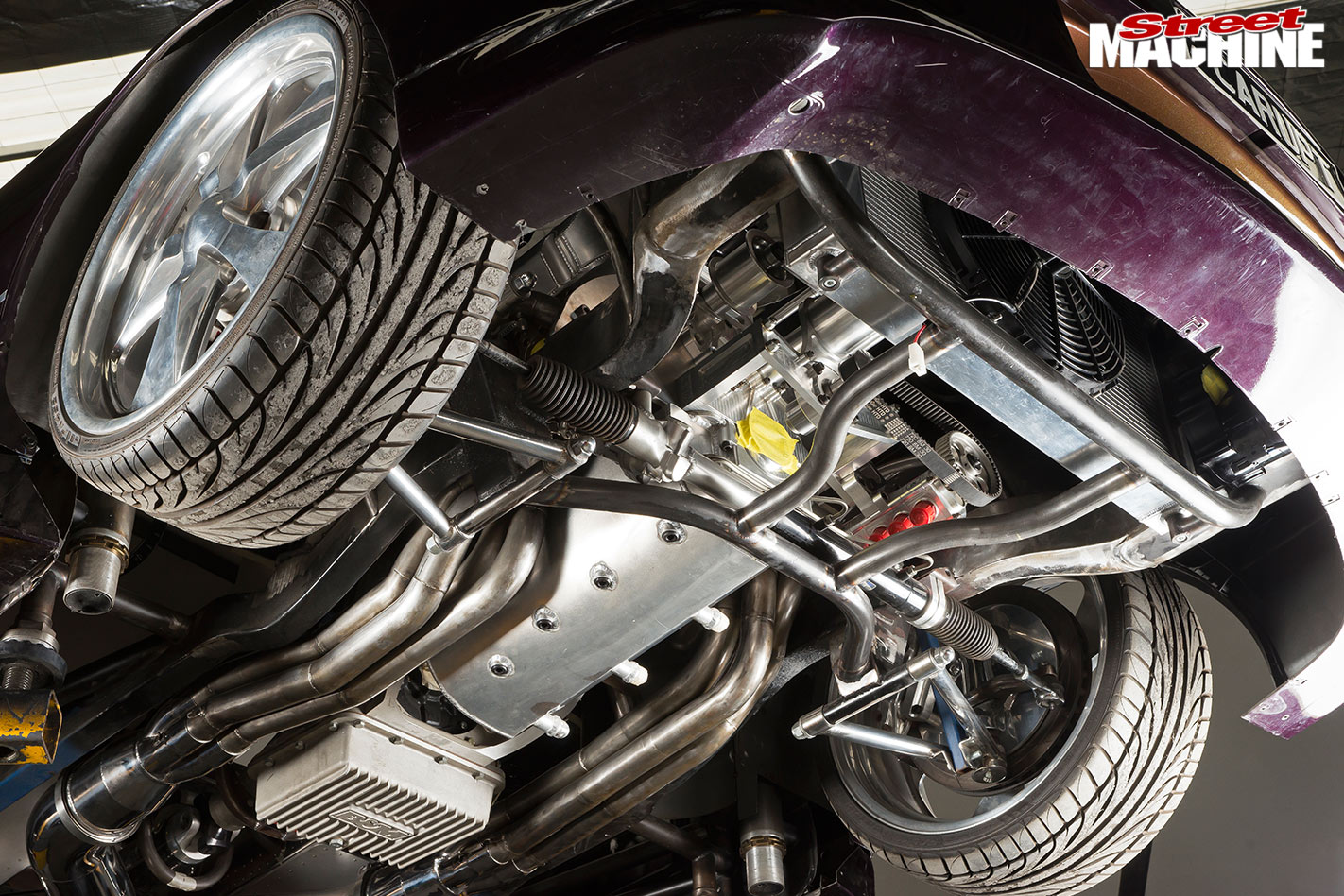 Here’s a good view of that TCI front end, dry sump, gorgeous headers, and of course, that VE Commodore rack. Just behind the front tyres are the Supercars air jacks

There is also a lot of custom work going into the body, both inside and out, with smoothed door handles, fuel flap and bump strips. The rear quarters have been pulled out at the bottom for a smoother transition to the bumper and the side mirrors have also been deleted, although Brent’s still working out how to finish off this area. Ideally he’d like to reshape the window opening so it’s not so squared-off, but that would require custom-made side glass. It’s do-able, but a lot of work. 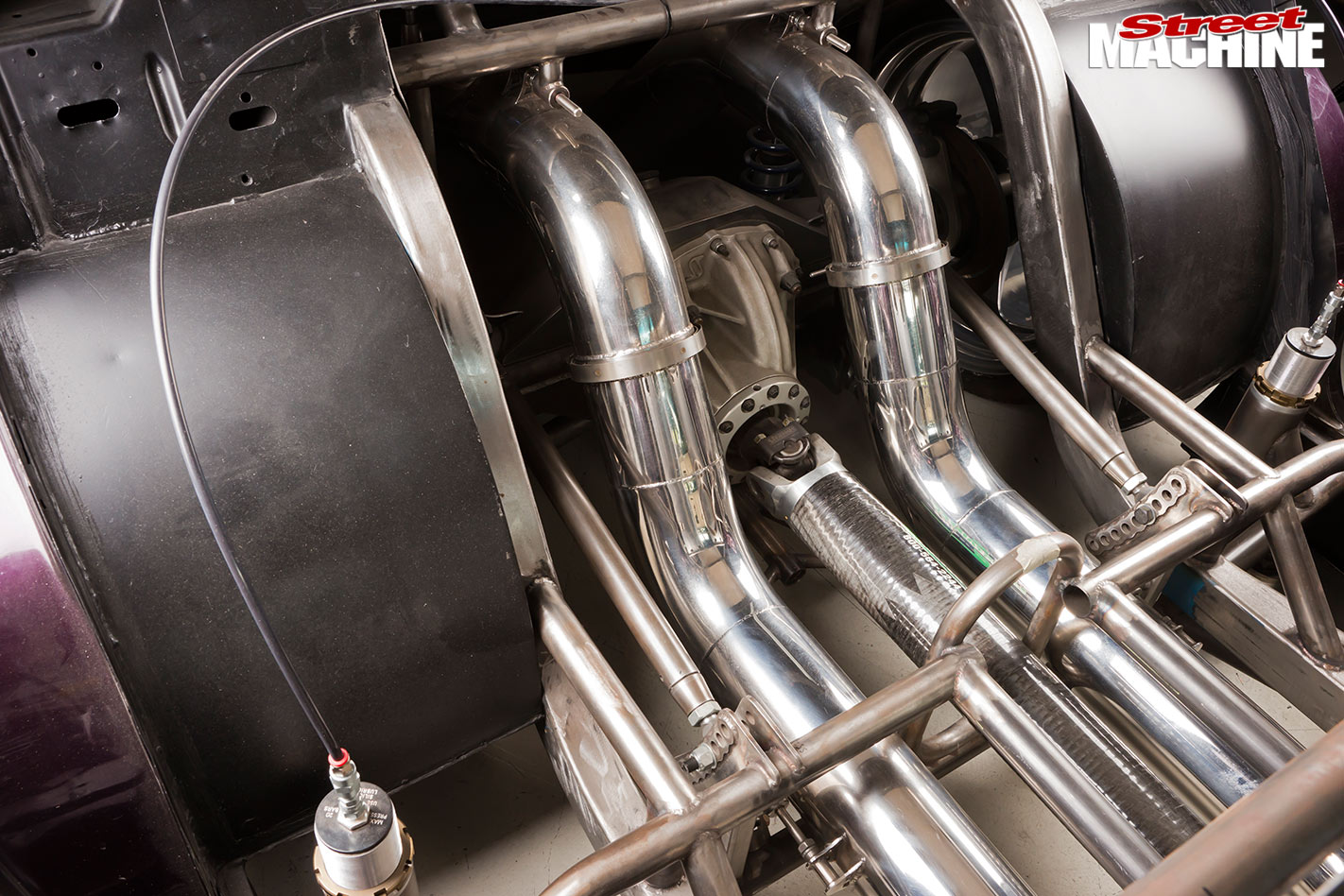 The interior is going to be pretty wild as well, and while the original dash is in place for the photos, Brent might change that. There will definitely be a Racepak in there keeping tabs on all the vitals. For something completely different in a late-model burnout car, Brent has gone for aluminium bomber seats from HandMade Seat Co. There are four of them in total and the interior will also feature a full-length metal tunnel that will get painted, while the flat floors will get some carpet. 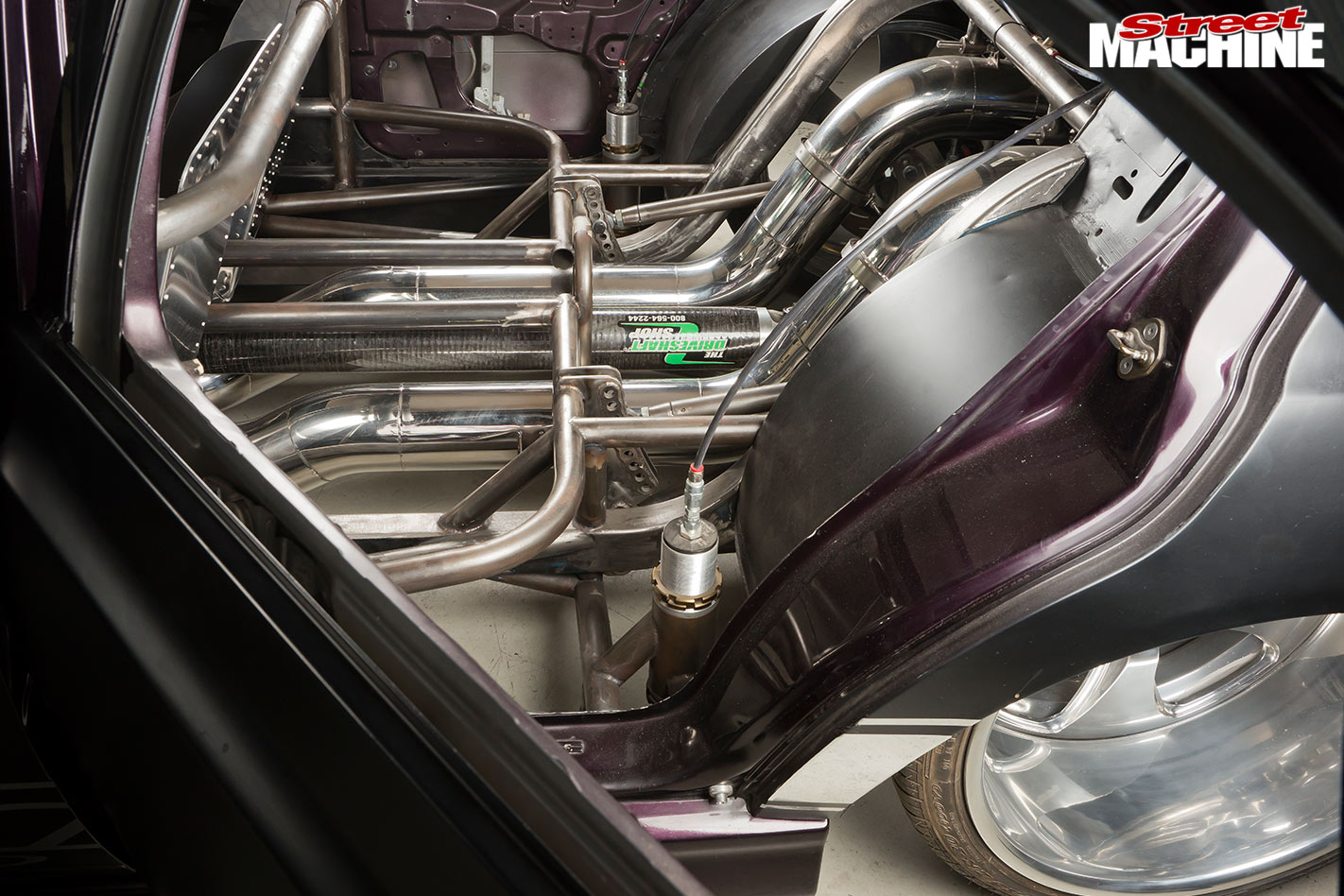 This gives you an idea of how extensive the bar work is in this car. The tailshaft is carbonfibre and the car runs V8 Supercars-style air jacks, because a trolley jack wouldn’t fit under it with the 75mm ride height

There’s already an eight-point ’cage in the car, but it will probably end up 10- or 12-point when it’s done. 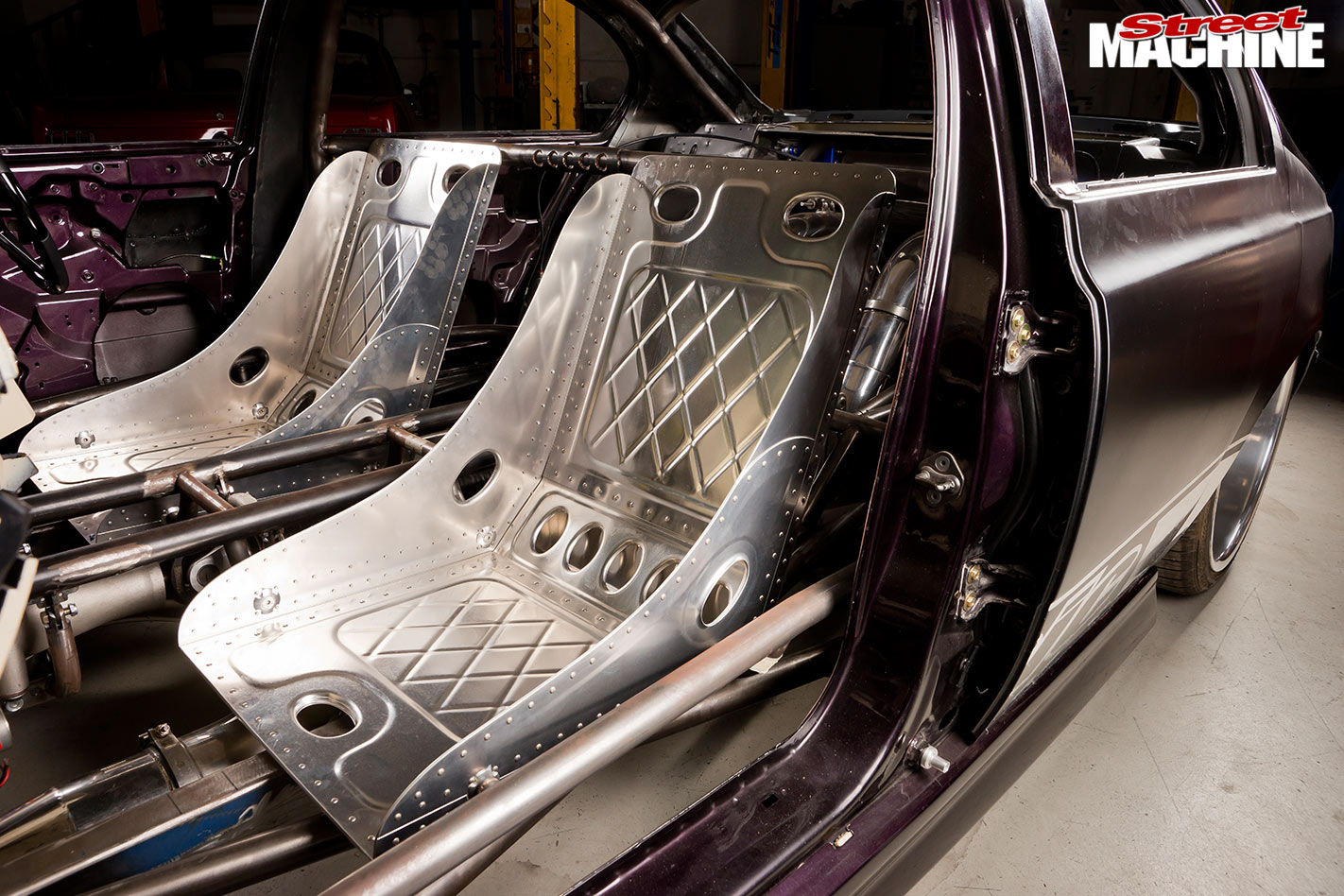 It took over 12 months, but the custom-made bomber seats from HandMade Seat Co. were worth the wait. There’s a matching pair to go in the rear

There’s no denying this car is a little bit out there, and it’s a bit hard to put into a box, but Brent was adamant that he didn’t want a car that could only do one thing: “I wanted to be able to do whatever I wanted it to do,” he says. “It was never going to be a dedicated drag car or circuit car, but if I want to, then I’ve got the option. I didn’t want it limited to a burnout pad or show hall; it had to have purpose.” 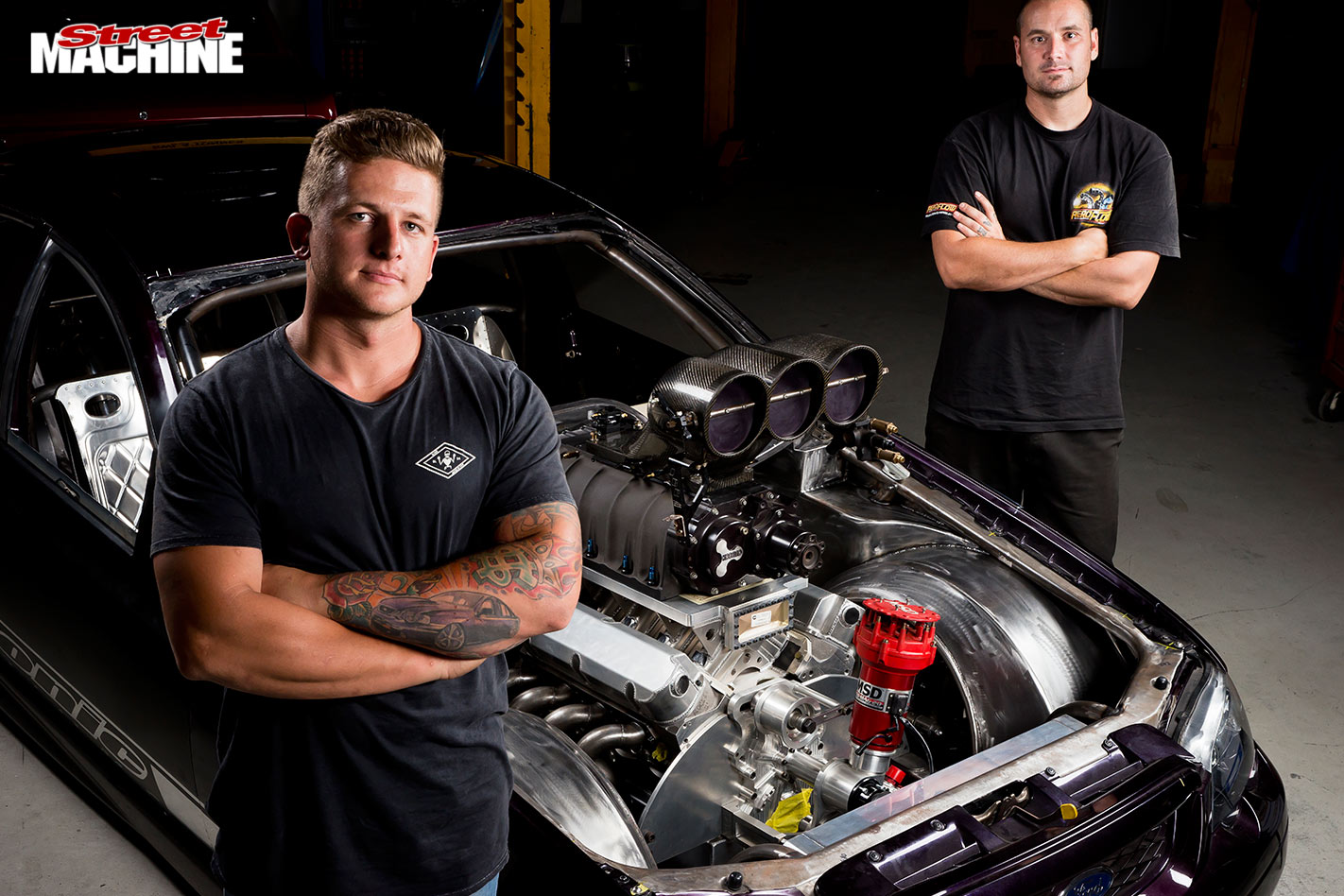