A blown and injected Chevrolet Camaro good for 1000hp at the treads? Giddy up!

Rather than reinvent the wheel, Brandon Mitchell takes an already winning formula and chases perfection with his blown and injected Camaro SS

IN THE fast-paced world of competition burnouts, it is difficult to come up with something fresh. All the big changes have already happened with the elite-level cars in the sport, so what is there to do next? 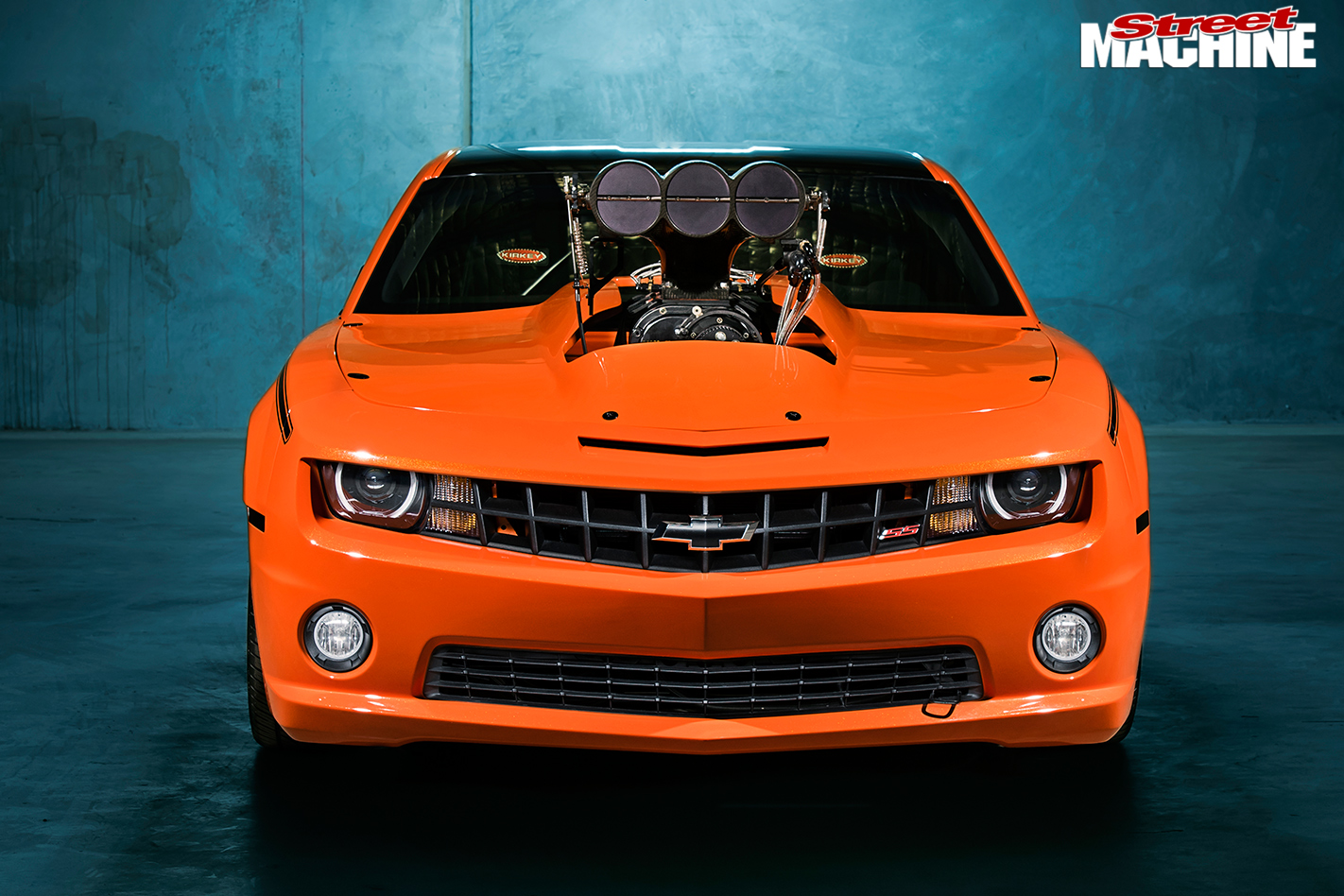 West Aussie Brandon Mitchell reckons the way forward is to strive for an even higher level of build quality and refinement. His 2012 SS Camaro, dubbed GRUDGE, has certainly hit the mark, with just the right mix of attitude, pleasing aesthetics and clever engineering.

“George Separovich [of Blown Motorsports] once told me that the big burnout cars expire after about three to four years. People get tired of seeing the same thing,” Brandon says. “Coincidentally, I was coming up to four years with my blown, injected HJ ute, BIG RIG, and I was pretty over it. Things hadn’t gone well with the last makeover, so I pulled the driveline and sold it.” 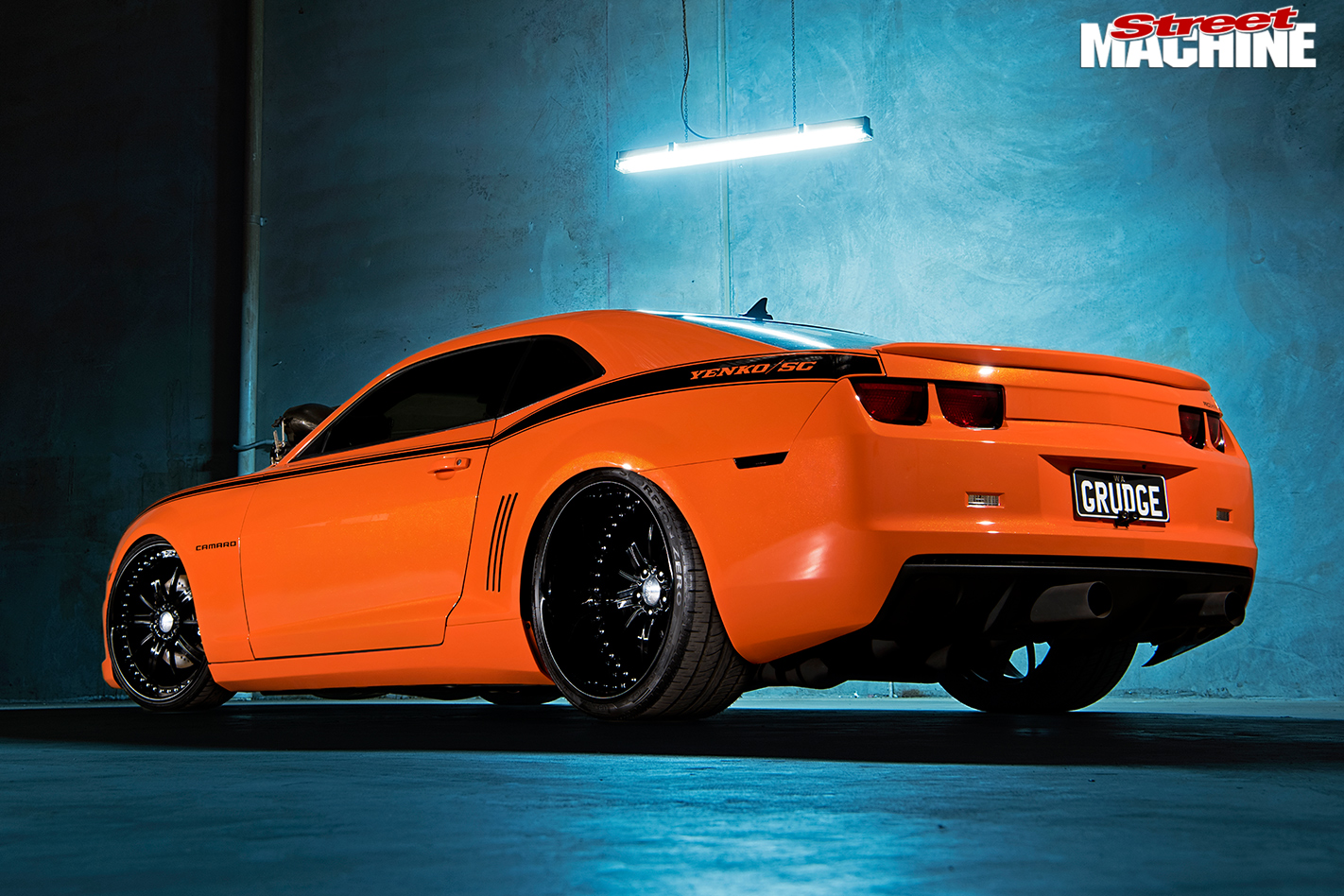 Brandon spends a lot of time working on boats and believes it's bad luck to change the name. His Camaro was already known as GRUDGE in its previous life as a drag racer and figured it best to have luck on his side and keep the name

With George on a trip over in the US, Brandon seized the opportunity to get him to scout out the next potential build. “I like the old-school stuff, so I was originally looking for a Nova to turn into a skid car,” he says. “That plan went out the window when George found the Camaro on the east coast of America. It was a seven- or eight-second car with a 427ci nitrous motor in it, and was built for grudge racing.” 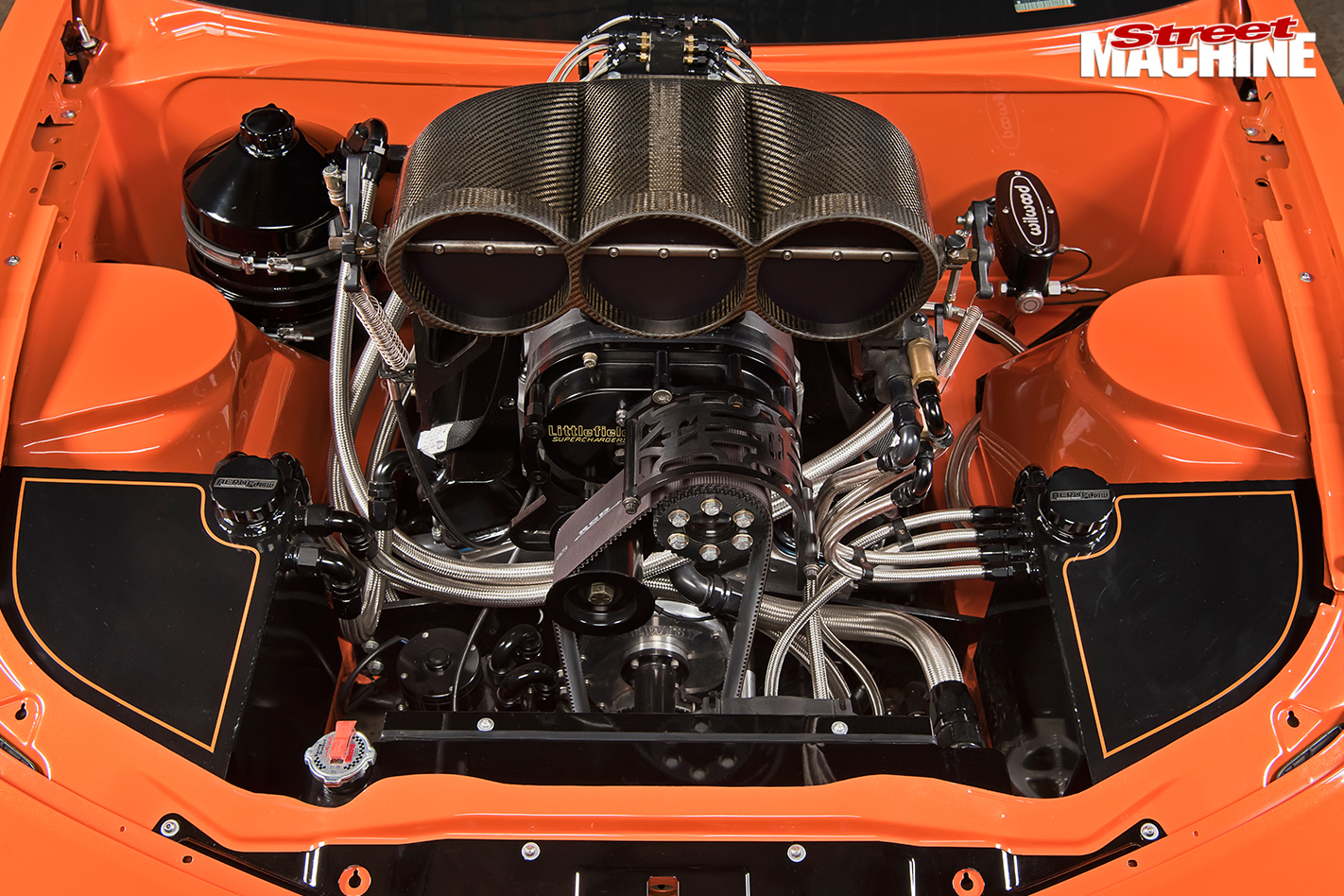 The engine bay is super-sanitary, yet all business - nothing is an afterthought here

More to the point, the quality of the work that had gone into the car was unlike anything Brandon had seen. “The car still runs the original floor, but the tube chassis has been notched into the original framework. Inside the car the rollcage is notched into the pillars, so with the trim fitted you don’t even know it’s there. It is a lot of work to do that,” Brandon explains. 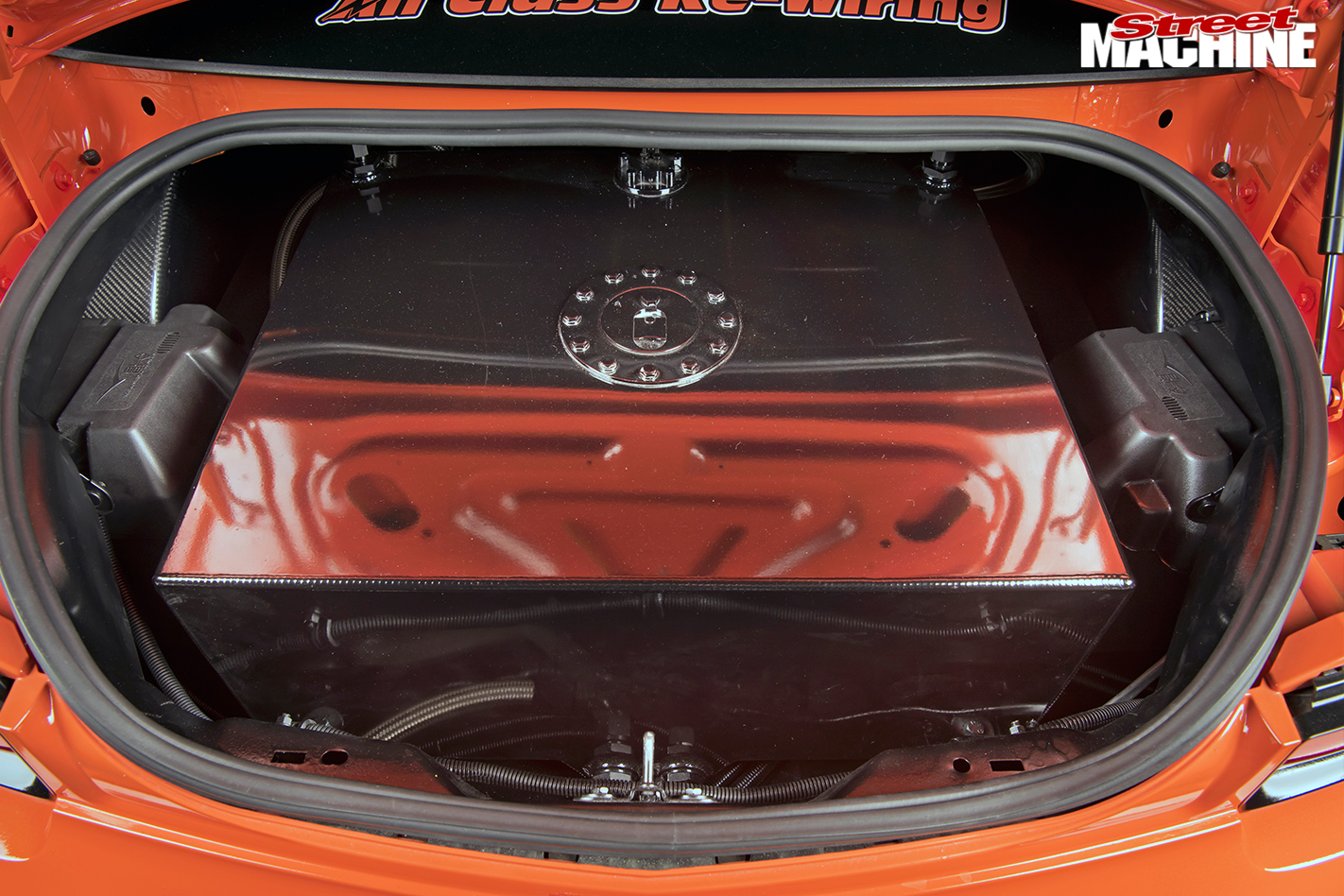 There's no room ofr an Esky in here - the 75L aluminium tank takes up all the space, nestled neatly in between the carbonfibre wheel tubs

With George threatening to buy the car for himself, Brandon had no choice but to make a quick decision. “I think the late-model Camaro looks sharp, and this was too good to pass up, so I told him to bring it home for me. We just missed the boat it was supposed to go on to get it home, and that turned into a six-month exercise. I was getting nervous, thinking I’d been had, but thankfully it turned up,” Brandon laughs. 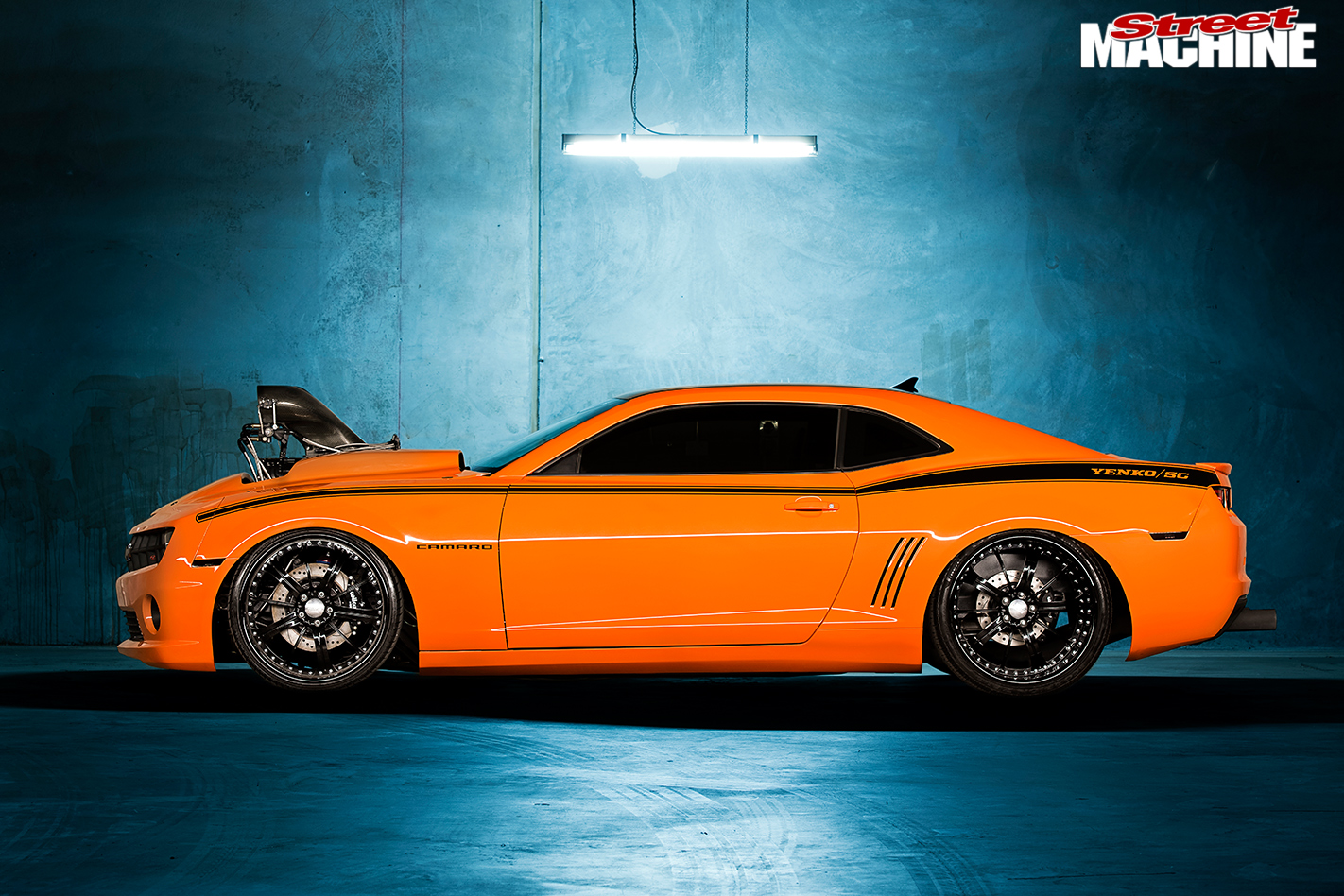 Stance is incredible important to Brandon, as it's the first thing people see. You can't overlook the bright paint, slammed ride height or the KWC billet wheels and then there's the Blown Motorsports-built engine reaching through the bonnet

With the Camaro finally home in Perth, Brandon looked at a few wheel options to change the look of the car. A set of 22x8 and 22x12 KWC 013 billet wheels were selected and ordered through Adam Spiteri at Cronic Customs. 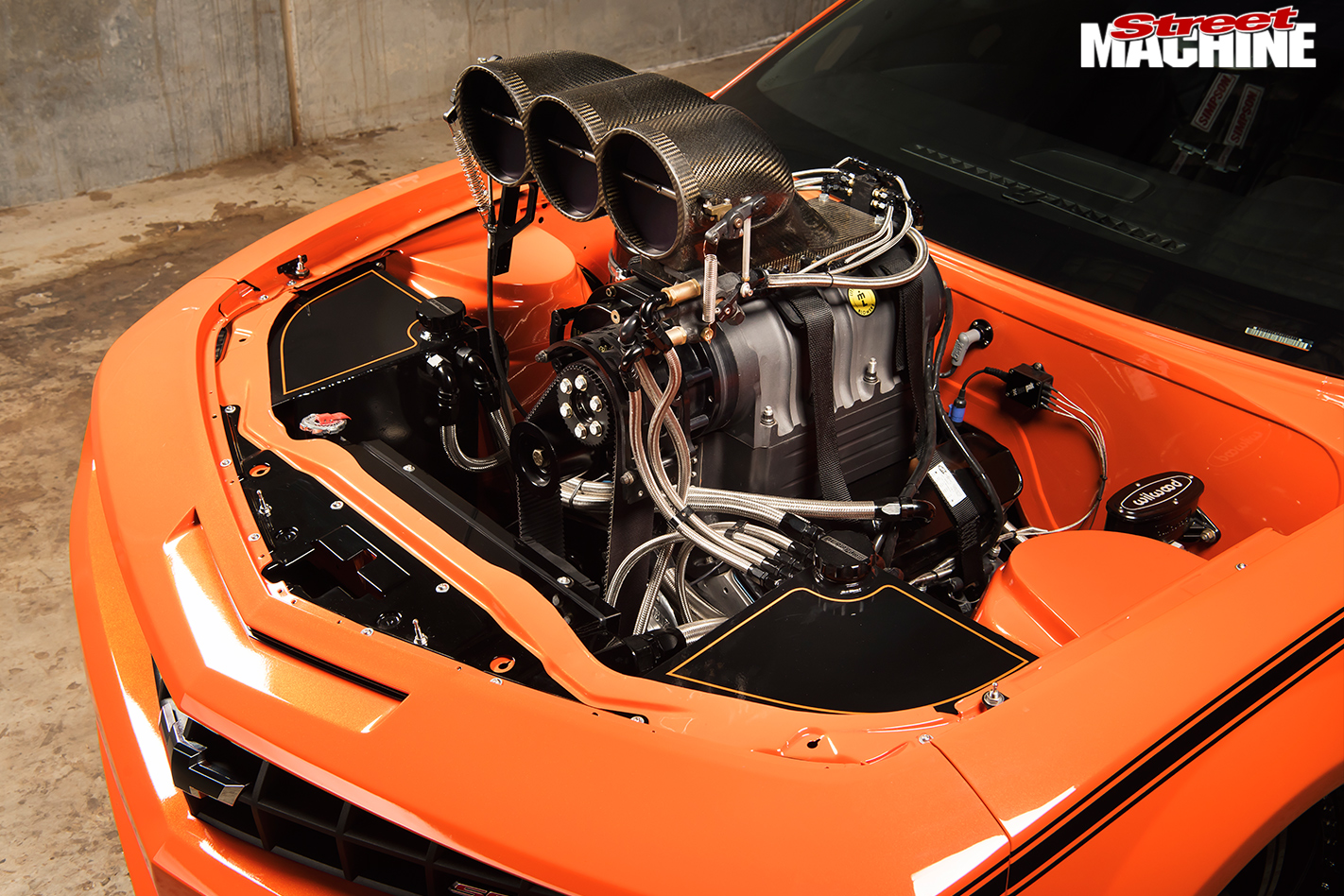 But there was going to be a bit of a wait for the custom-made rims, so George was once again called into action to give the motor from the HJ ute a freshen-up. The dry-sumped 377ci blown and injected Chev starts with a Dart block and is filled with a Crower crank, Oliver rods and CP pistons. Bolt on a set of CNC-ported Dart heads, an 8/71 Littlefield blower and a carbonfibre Pro Mod injector hat and you have a straight-up nasty-looking engine that’s good for 1000+rwhp.

Peter Veersma gave the Reid-cased Powerglide a once-over, and this was soon bolted up to the angry Chev along with a Freo Torque Converters custom converter. A Final Drive tailshaft sends the power back to a full-floating sheet-metal nine-inch with 35-spline axles. 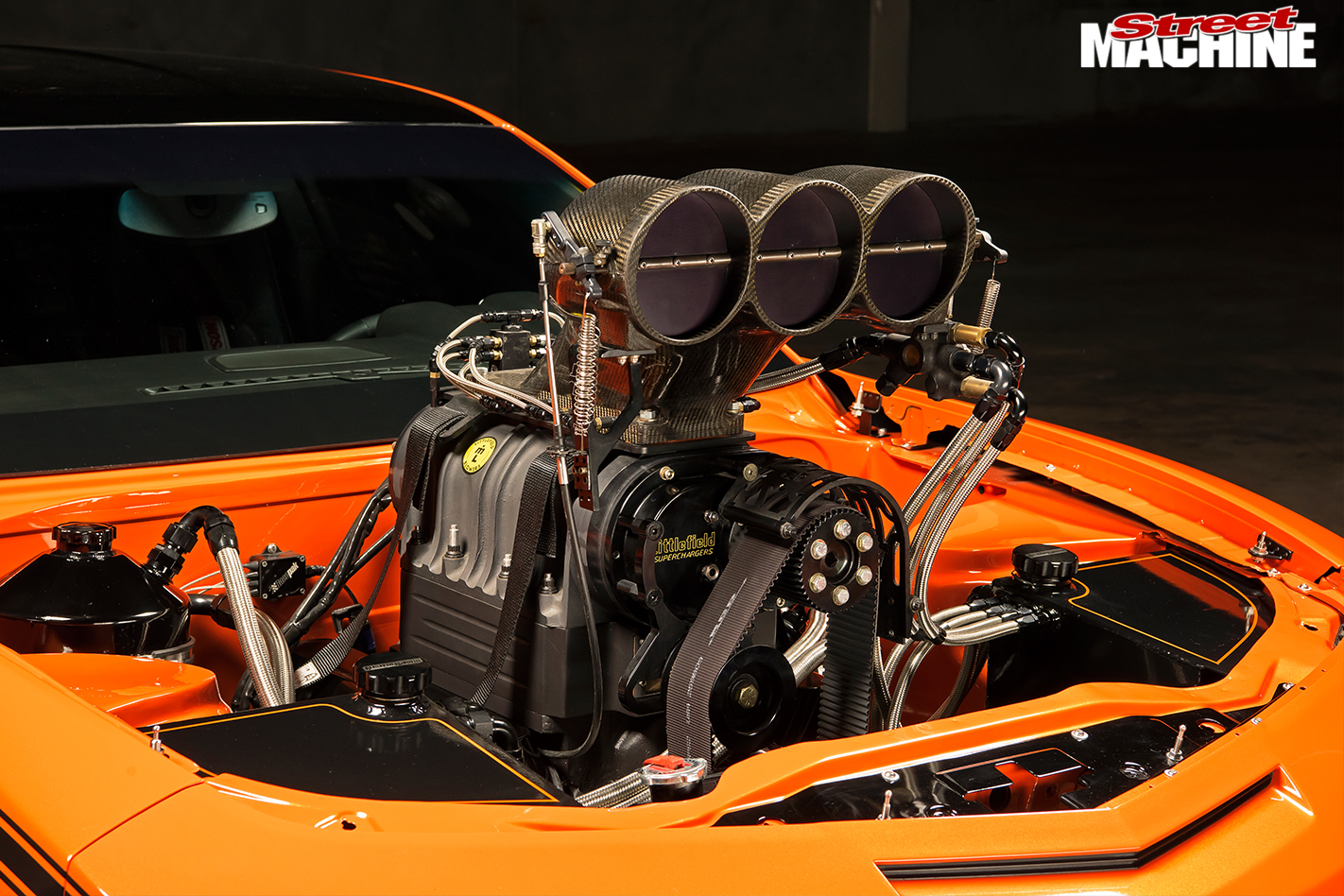 With 377ci, an 8/71 Littlefield blower and a carbonfibre Pro Mod injector hat, the combo is good for 1000+hp at the treads

Next the car made its way to Ducker Race Cars, where Greg Ducker performed some necessary modifications to convert strip weapon into burnout machine. “Greg shortened the diff to suit the deep-dish KWC billets in the rear, and because the car only ever had frontrunners on it, a custom K-frame had to be made to fit the eight-inch-wide billets on the front,” Brandon explains. The Strange Engineering manual steering rack didn’t have enough steering lock to satisfy requirements, so that was turfed and a BA Falcon rack found its way under the front of the Camaro instead, along with Wilwood brakes front and rear. Greg also built an engine plate, a set of headers and the full twin four-inch system that finds its way underneath the car. 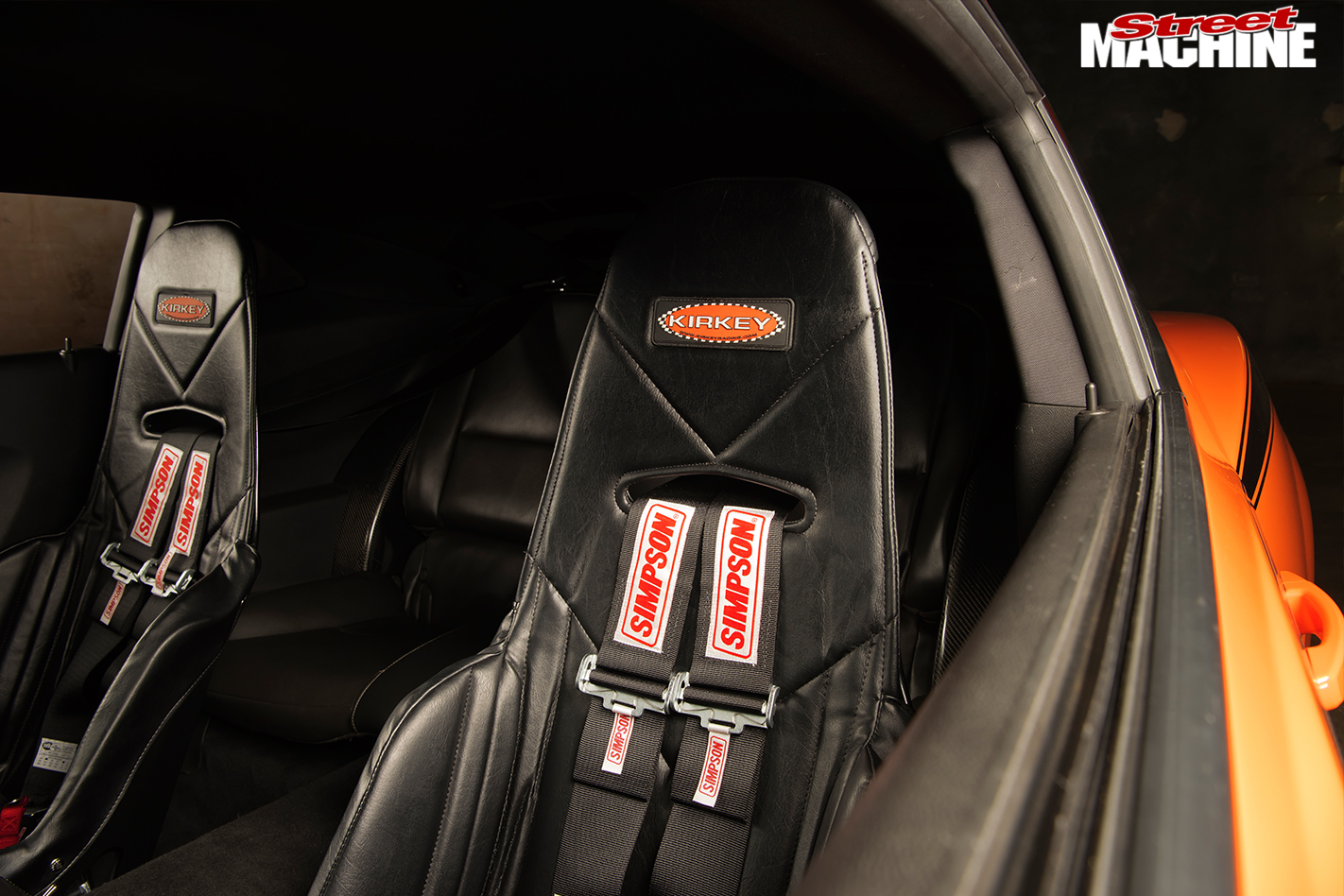 Aiden Stampalia fabricated the new flat firewall to suit the engine, and Todd at Blizzard Customs whipped up the aluminium tanks that take pride of place at the front of the ’bay.

With the mechanical stuff sorted, Brandon turned his attention to the exterior of the car, enlisting the expertise of Joe Suvalko and Emily Parker from Kustom Panel & Paint. The holes in the front guards where the exhaust originally exited were filled, the side mirrors where deleted, the engine bay was massaged and the fibreglass bonnet was modified to suit the Camaro’s new engine combo. After poring over a selection of colour charts, everyone eventually agreed that Lamborghini Orange with a pearl over the top would look amazing when the Camaro emerges from a cloud of smoke on the burnout pad. 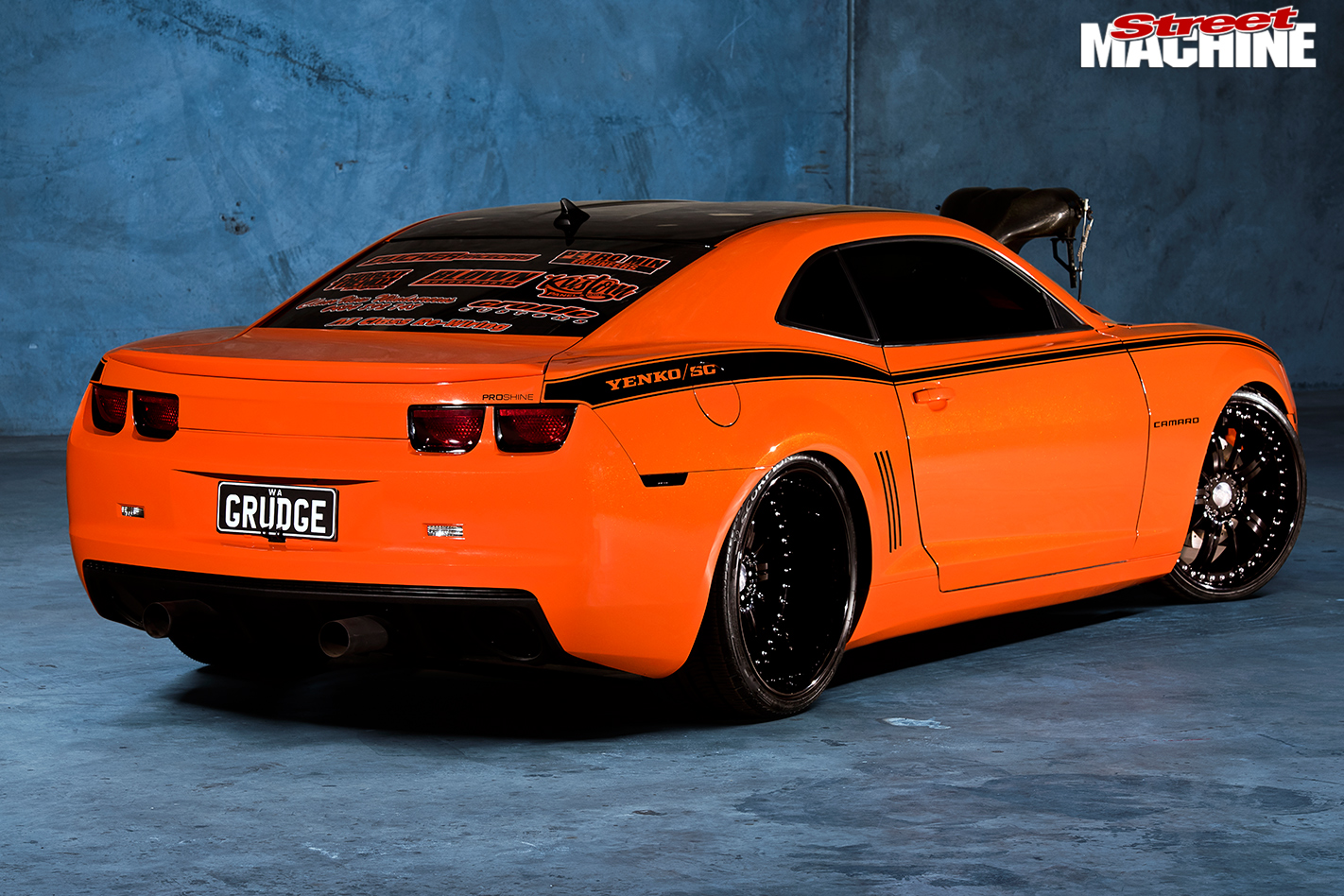 To complement the Yankee muscle car’s lines, Brandon wanted a contrasting ‘Yenko’ stripe down the side of the car. “I bought a factory stripe kit, but I just didn’t quite like how it looked, so I asked Jemahl from Current Trendz to make me a set of custom stripes,” he explains. “I think it looks great now, and it breaks the colour up nicely.”

On the inside, Brandon wanted to keep it purposeful yet comfortable. The trim has been kept as true as possible to the original interior, albeit with the addition of a pair of Kirkey race seats trimmed in leather. The centre console is also now leather-clad, as are the carbonfibre tubs and the modified rear seats. A Racepak dash has been moulded into the original fascia, allowing Brandon to keep a keen eye on the vital signs. There is indeed a comprehensive rollcage inside the car – though as previously mentioned you won’t see it; it is hidden underneath the trim. 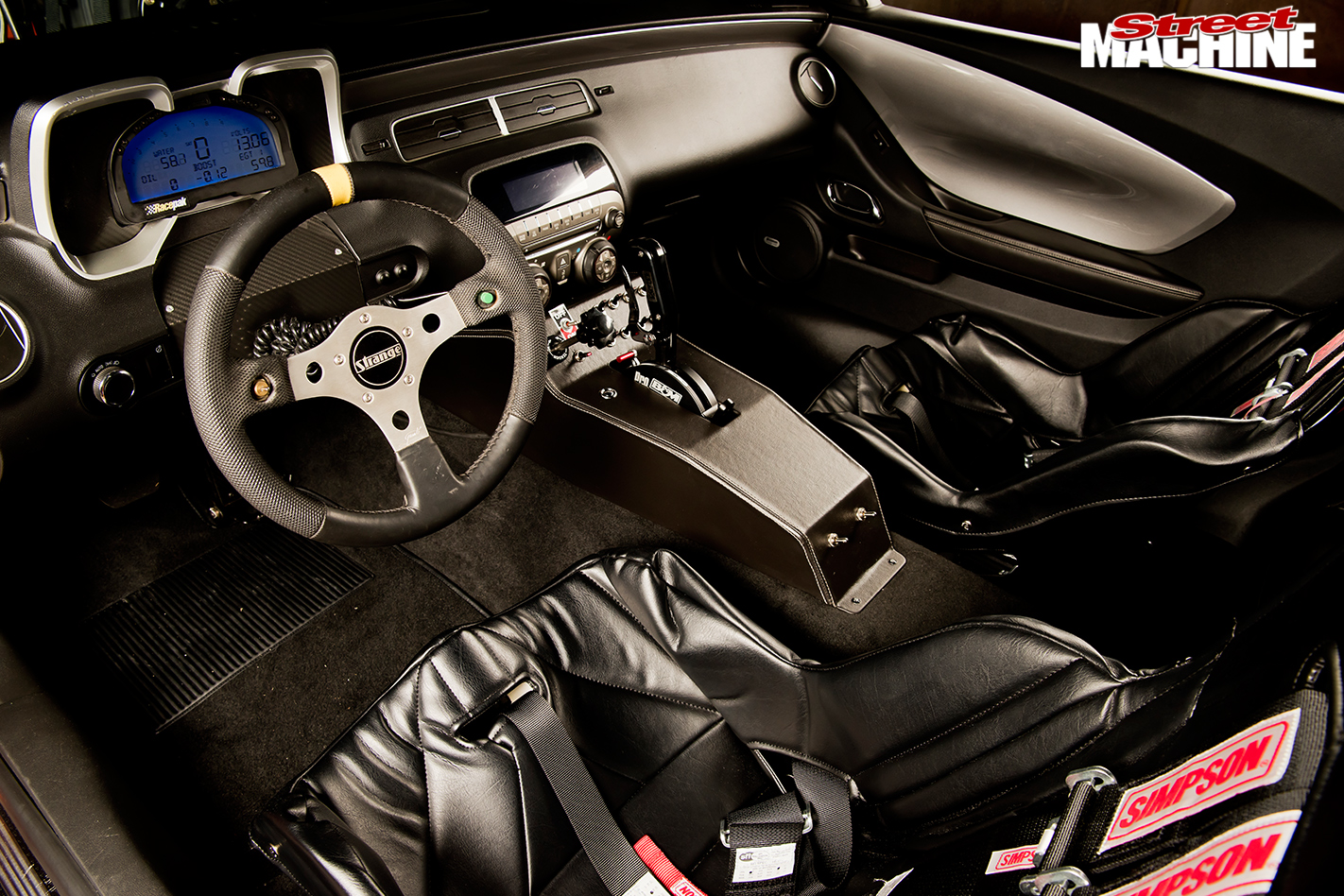 Brandon wanted the inside to be functional and comfortable. Liberal splashings of leather trim cover the Kirkey race seats, centre console, rear seats and tubs

With this year’s WA Hot Rod & Street Machine Spectacular being earmarked for the Camaro’s great unveil, Brandon pulled out all the stops to get the car ready. He fitted the motor and ’box and plumbed in all the fluid lines when he could find spare time after work.

His hard work paid off; not only was he awarded Best Unveiled Car at the show, but also scored himself a VIP invite to attend MotorEx Melbourne, with the Camaro being featured in the Meguiar’s Superstars pavilion! 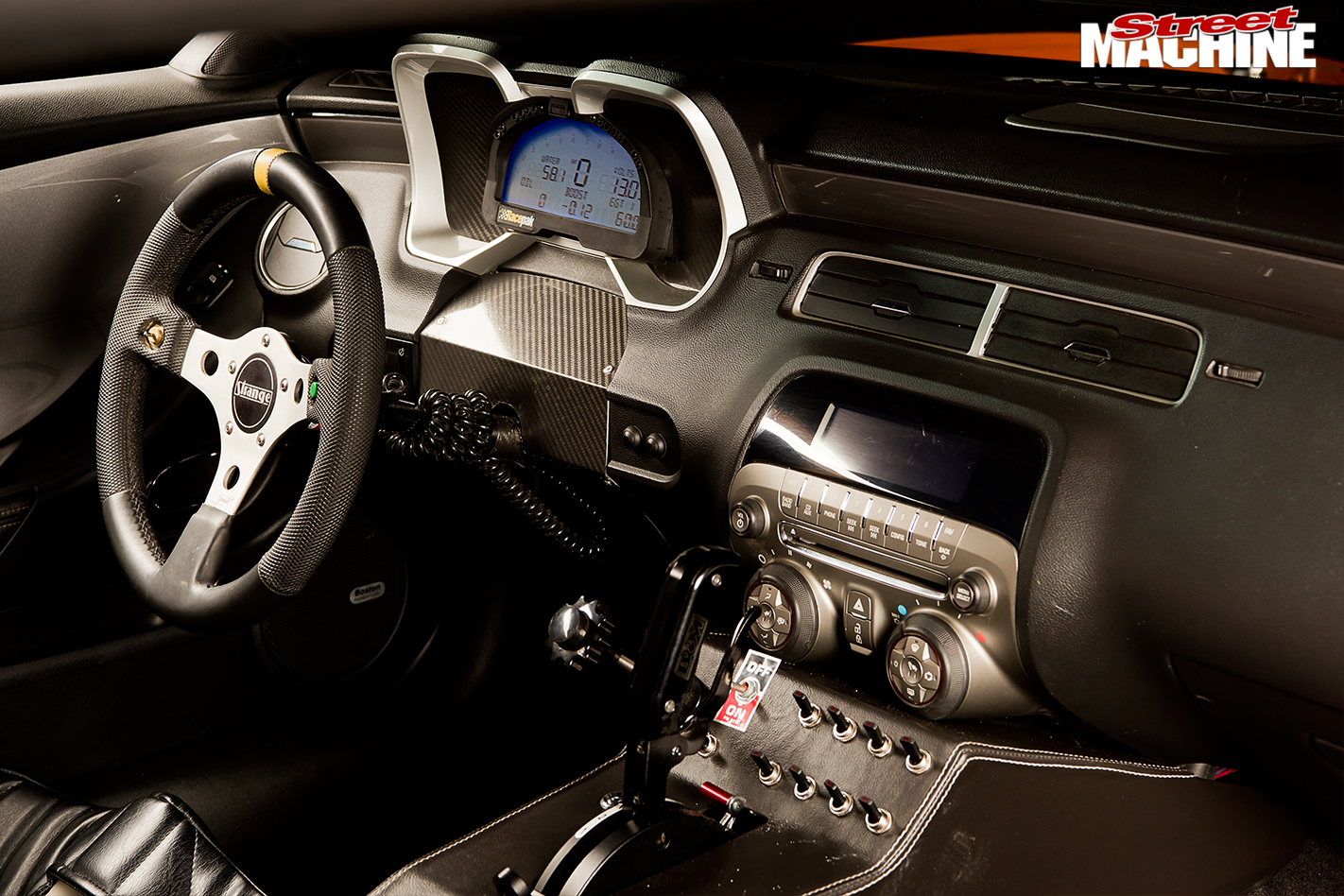 A racepack dash lets him keep an eye on things, and believe it or not, there is a rollcage in there, hidden away underneath the trim on the pillars and roof

With the car finished and back home, Brandon was able to enjoy a couple of quick laps around the car park at a recent charity event. “After an intense three-year build, it was a pretty special moment to be able to jump in, fire it up and take it for a quick spin,” he reckons.

Not one to get too sentimental though, Brandon has no qualms about chucking such a well-executed build onto the burnout pad, and when he feels ready it will happen – after all, that is exactly what he built it to do. 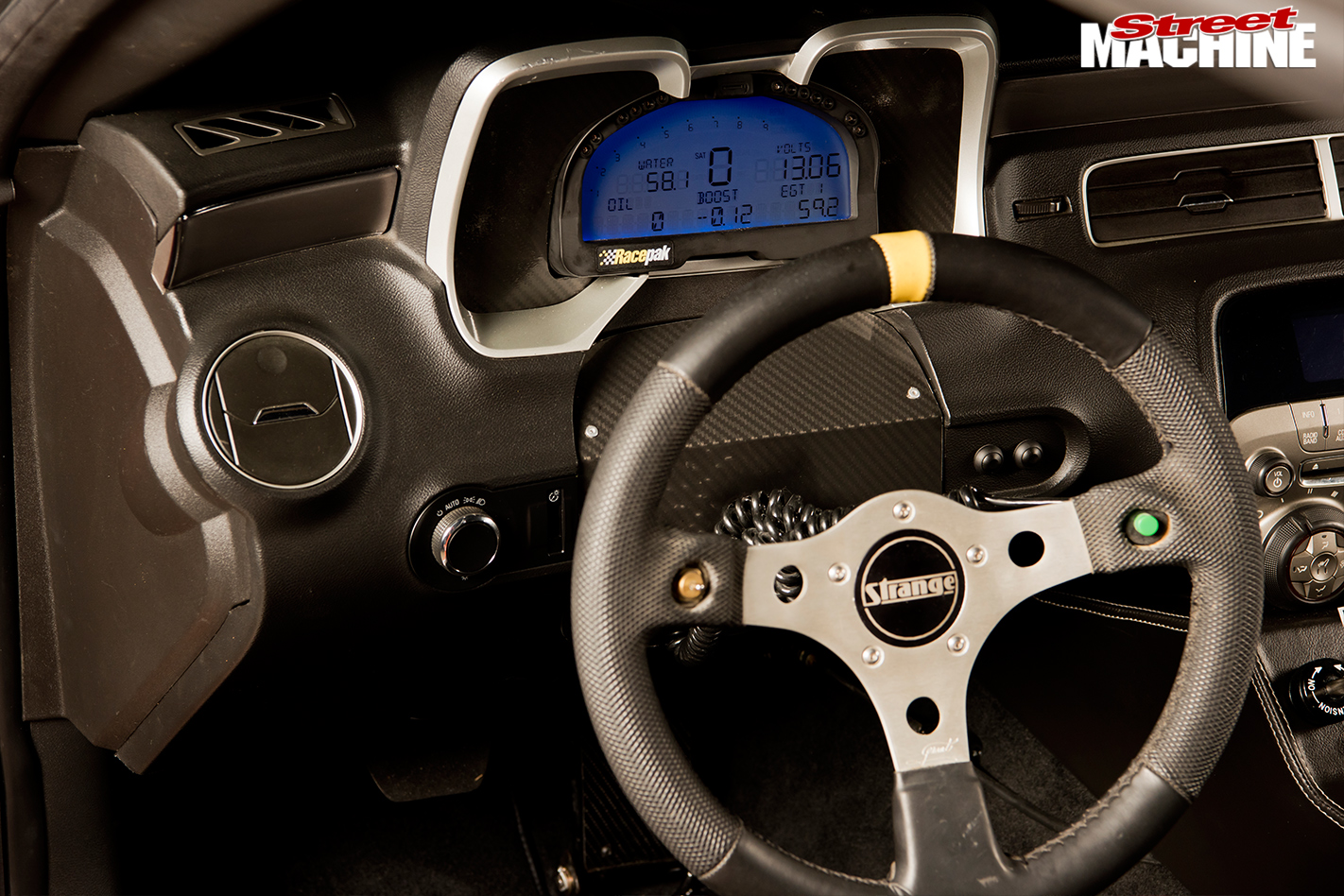