IT WAS never meant to be this crazy.” Danny Makdessi, the owner of this extremely crazy VC Valiant, is not the first man to utter those words. But he should know better.

He and his cousin, Jason, built and raced a Honda Civic that ran 9.30@164mph through the front wheels. Then there was his wild WRX that cleaned up at MotorEx before staking a claim in the coveted Summernats Top 10. When you hook up 3000hp, 350km/h trap speeds are just six seconds away. No brakes are man enough for that - you need a pair of parachutes to keep you out of the sand trap

What else would you expect from the co-owner of Custom Bodyworks, a Sydney-based panel and paint shop that’s been associated with several Street Machine cover and feature cars, including our very own Southern Comfort Cruiser ’67 Galaxie.

“I’ve built so many cars for other people, I thought it was about time I built something for myself,” Danny says.

His client list includes surnames such as Campisi, Gillespie, Cutelli, Tesic, Rayhem, Mifsud and Perdikaris. Given their achievements in drag racing, that ‘something’ was inevitably going to be a strip-oriented weapon. 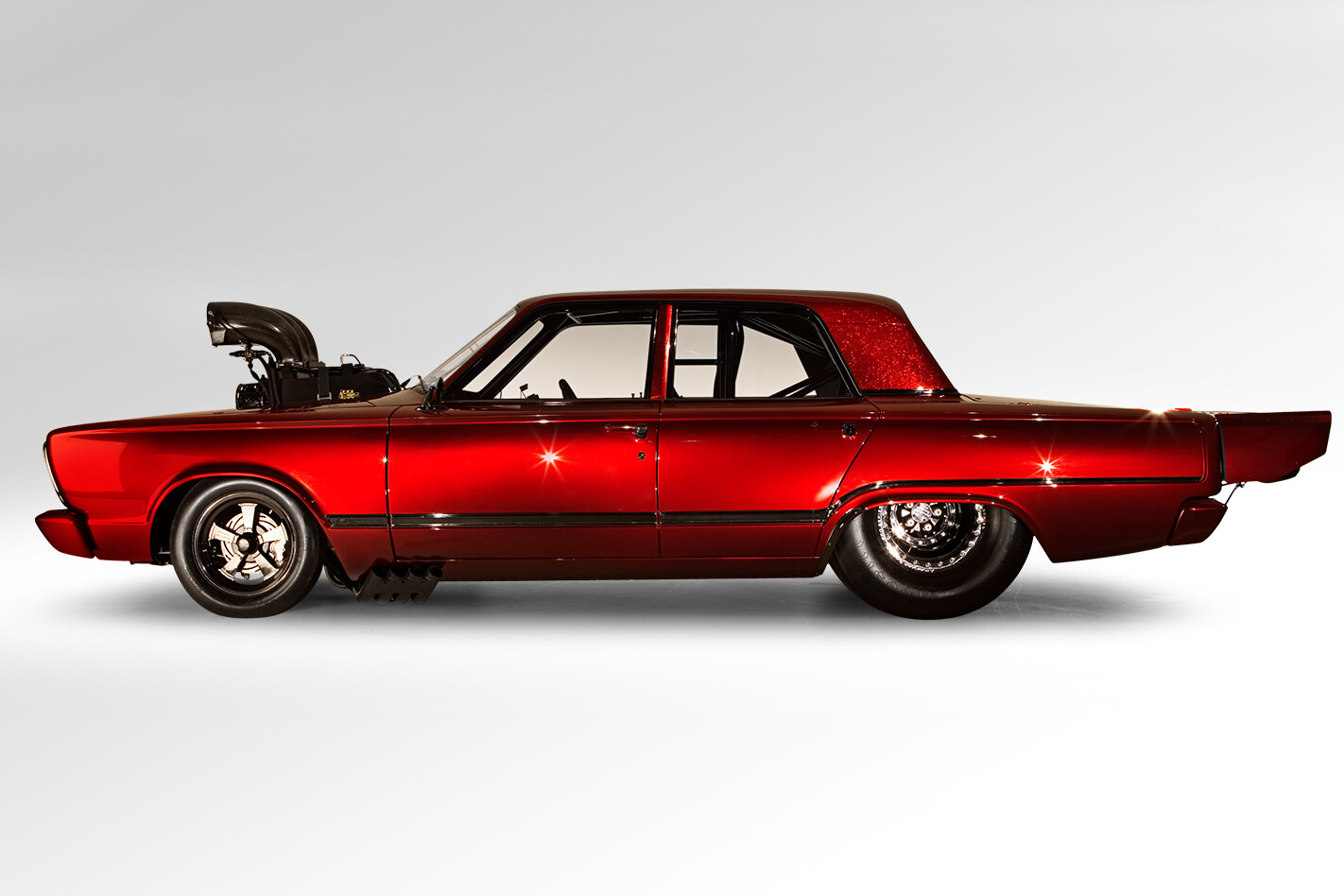 But it was never going to be this crazy.

But before we get to Brett, we need a little history on this rude, red Val that’s a big part of Danny’s life.

“Dad bought it to bring me home from hospital,” he says. It served as the Makdessi family truckster until his father passed it to a teenage Danny.

9
A bona fide Supercharged Outlaw - with factory side mirrors, wipers and wind-up windows. Ya gotta love that!

“I was on my Ls but as soon as I got it, it was straight into the garage. Vinyl roof off, steelies off, and I began building it up. Dad was peeved but I didn’t want any of that factory shit.”

Several fun years later, the VC needed a fresh makeover, so off it went to John Somoraz Race Cars (SRC) for a set of simple wheel tubs.

Tubs turned into a back-halved car, then a three-quarter chassis and finally a full chassis.

“It was at SRC for five years. John would finish it, I’d pay him, but then I’d change my mind and it would have to be done all over again!”

The full chassis accommodated a radical blown and methanol-injected Chrysler 340 that Brett screwed together.

And it was then that Brett uttered the fateful words: “It may be good for high sevens but if you want to run sixes, you’ll need a Hemi.”

Danny’s arm was easily twisted: “I always wanted a blown Hemi and John told me it’d drop straight in.”

The Hemi’s a complete 521ci Brad Anderson VI, built for bulk power by GRS to overcome the VC’s weight. “I wanted it to look like a car,” Danny says. “It’s all steel — only the bonnet, boot and bars are fibreglass.”

9
Aluminium panelling was given the carbon-fibre look via 3M vinyl wrap. Leather MOMO wheel was Rocky's idea, who reckons it looks mad!

For a gearbox capable of handling that, Danny called his brother Al at Al’s Race Glides, who built a bulletproof TH400.

The housing is GM, the rest is custom. Notable details are the 35-spline input shaft and taller gears (1.86 first, 1.40 second) to get the power down. Al says the advantage of the three-speed over a two-speed Powerglide is you can take off in second when traction is poor.

9
Fine tuning of the engine is best achieved with a data logger. The Racepac digital dash, with built-in data logger, kills two birds with one stone

The neddies charge through a chrome-moly Mark Williams tailshaft into an SRC-fabricated 9½-inch. No, not a nine-inch, a 9½in full-billet centre by Tom’s Differentials — straight out of the Doorslammer parts bin.

The build had been progressing steadily but Danny gave SRC a hurry-up as he wanted to debut the car at MotorEx in July, 2012. SRC delivered it with 10 months in hand — completely gutted, in bare metal and not pretty after the sand blasting. Plus, it had never been assembled so there was a mountain of work to do.

With everybody telling him he wouldn’t make MotorEx, Danny announced: “I’m going to finish it for Summernats!”

9
Danny says the car's been built half a dozen times but never finished. "I'm too scared to weigh it - it's probably over 3500lb, which is bloody heavy for a 2400lb class," he says

That was just 12 weeks away, so he mustered the troops and convinced them to dig deep. RDG Engineering fashioned tanks, handles, brackets and supports. Brett whipped up the fuel system and helped assemble the running gear, George and Rocky (Pac Performance) created the custom brake system, complete with mounts and plumbing, and also supplied and set up the Racepac dash data logger, and the whole car was wired by Gadget.

Danny’s the head painter at Custom Bodyworks, so it needed to look spectacular and Owen Webb mixed up a custom Brandywine HOK Kandy that was applied over a black base.

Above the hip-line, heavy red metalflake was added with Red Kandy over the top. It’s dazzling out in the sun — especially the HOK logo that Joe Webb airbrushed onto the boot lid.

Almost the only items not black or red are the headlights and blinkers, but only the chassis, diff and rear suspension were painted. Astor Metal Finishes black-chromed the blower drive, fuel tank, puke tanks, gearbox, zoomies, bellhousing, shifter, wheels — everything.

Inside, the aluminium panelling was sheathed in textured 3M carbon-fibre wrap. The only concessions to comfort are the hood lining, a square of carpet under Danny’s feet and the padding on the Kirky alloy seat, all courtesy of Elite Custom Interiors.

To meet the deadline, Craig Burns from Street Car Fabrications was welding bars at Christmas, Rocket Industries went into overtime, and WA racer Jeffrey Clarke sourced a mountain of parts at the last minute.

9
Either side of the Doorslammer spec 9.5-inch differential are 17in-wide Hoosier slicks

“It was a monster 12-week build,” Danny says. “Baldy and Stumpy were virtually by my side 24 hours a day. Any spare time my neighbours Bill and Paul had, they’d lend a hand — so too did Wassa, Ronnie, Gaz and Andre.”

With so little build time, you’d imagine it’d be a bit rough around the edges, however Summernats Top Competition, Top Engineered and Top 20 trophies say otherwise. “Not bad for a race car,” Danny jokes.

The hardest part of the build was all time away from his family. “My kids, Daynah, Jacob and Noah, didn’t have a father for 12 weeks. They helped out a few times, but still.”

Danny’s wife, Linda, was also very supportive. “She’s not silly — she knows how much the car owes me. She tells everyone to come over and look at our new house in the garage but I’ll never sell it — it’ll stay in the family forever.”

9
The build was a real family affair. Danny's two young sons, Jacob (back) and Noah (front) helping sand the rollcage ready for paint

Currently it’s in show trim; after MotorEx he’ll raise the suspension, bring a few things up to spec and send it down the track, where the goal is to run mid-sixes at 220mph.

And then, that’ll be that. Except Rob Campisi has taken over from Brett, saying: “It’s got the right engine, all it needs is a couple of turbos and it’ll run quick!”