Burnout maestro Peter Grumsa has announced that his mental ATRISK XR Falcon has been retired from competition and that he’ll be debuting a new ride at his event, Xtreme Powerfest. The show happens 29-30 October at Bairnsdale Raceway and Peter will be raffling off rides in the new car on the day.

Here's a look back at the stunning XR, which was our cover car from the February 2014 issue of Street Machine 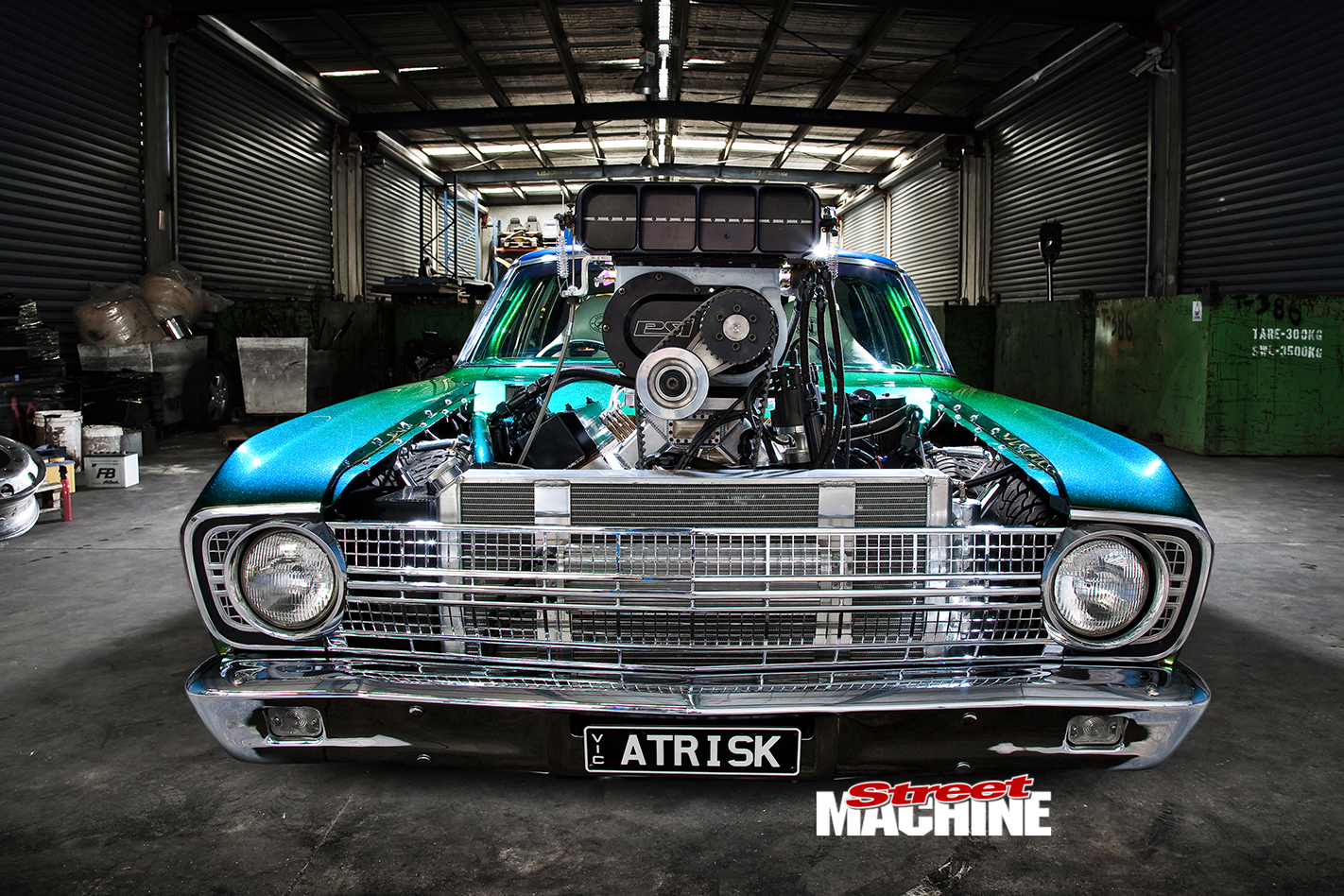 ANY conversation about the top guys in the burnout field has to include Peter Grmusa. How can it not? He’s won everything there is to win and his cars have elevated the whole scene in terms of impact, build quality and sheer awesomeness. And he’s done it again with this latest revamp. 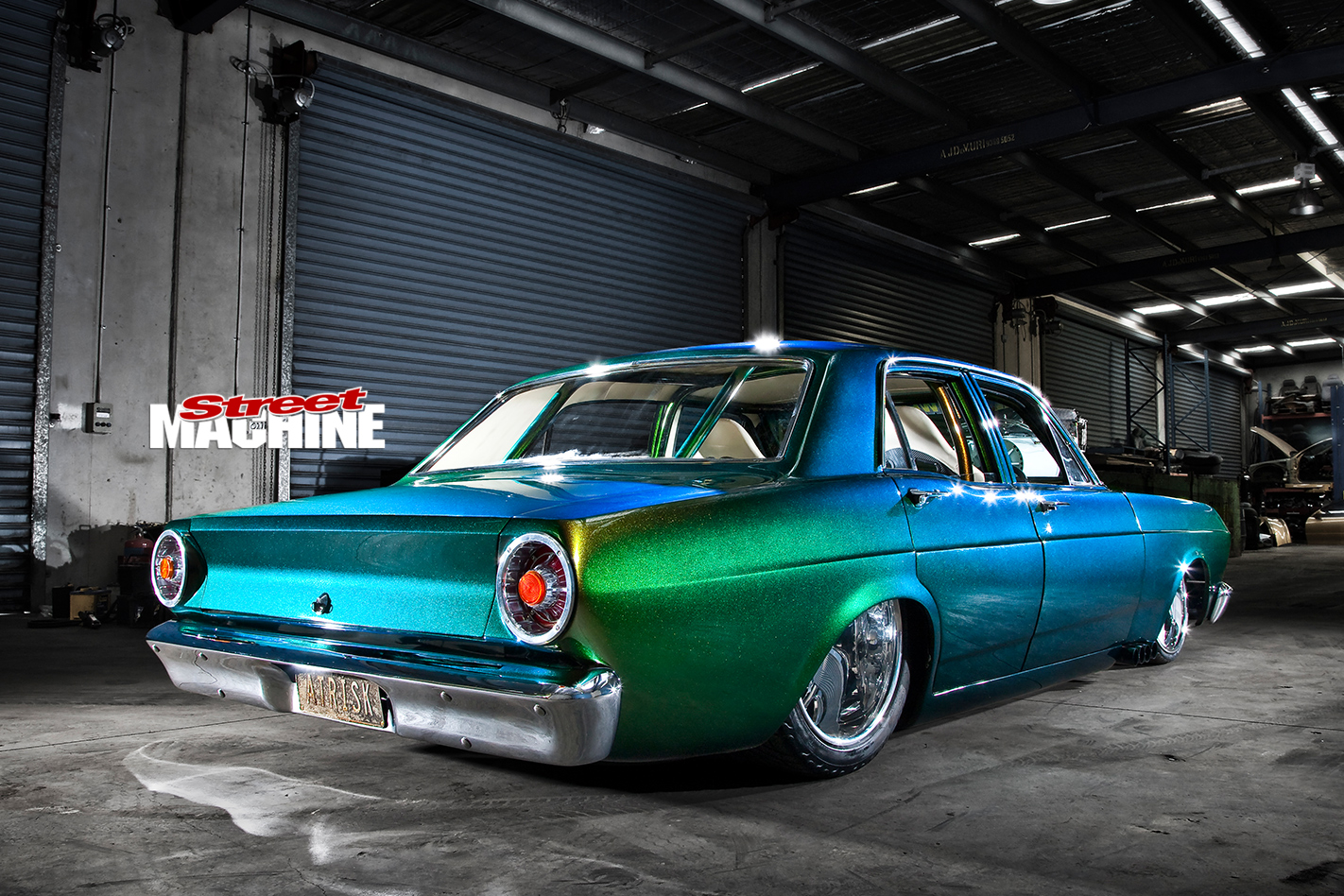 “It all started with ATRISK,” Peter says. “The first time I ever entered it in a burnout comp was at Summernats, and I won that two years in a row.”

From there, he’s gone on to win just about every major competition in the land, with overall prize money totalling well into the six-figure range. But Peter reckons he’s never counted it all up. 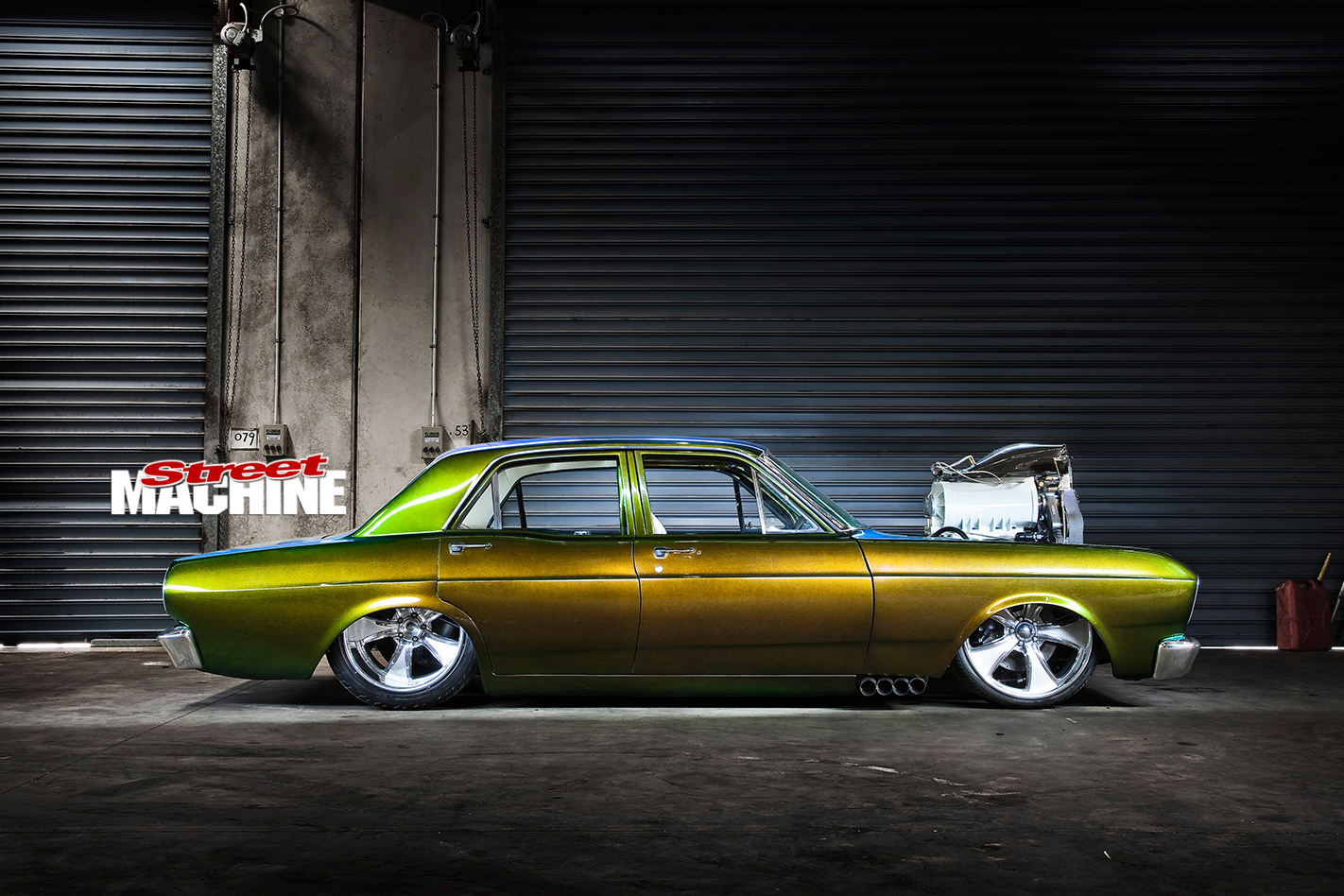 “I try not to add up what I win and what I spend. I think if you start adding up what you’re spending and what you’re winning, it would probably make you sick, and you wouldn’t do it.”

Peter just loves doing skids, but there’s more to it than that. He loves doing them with a bit of style: show-quality cars, with insane engines, destroying tyres in seconds. 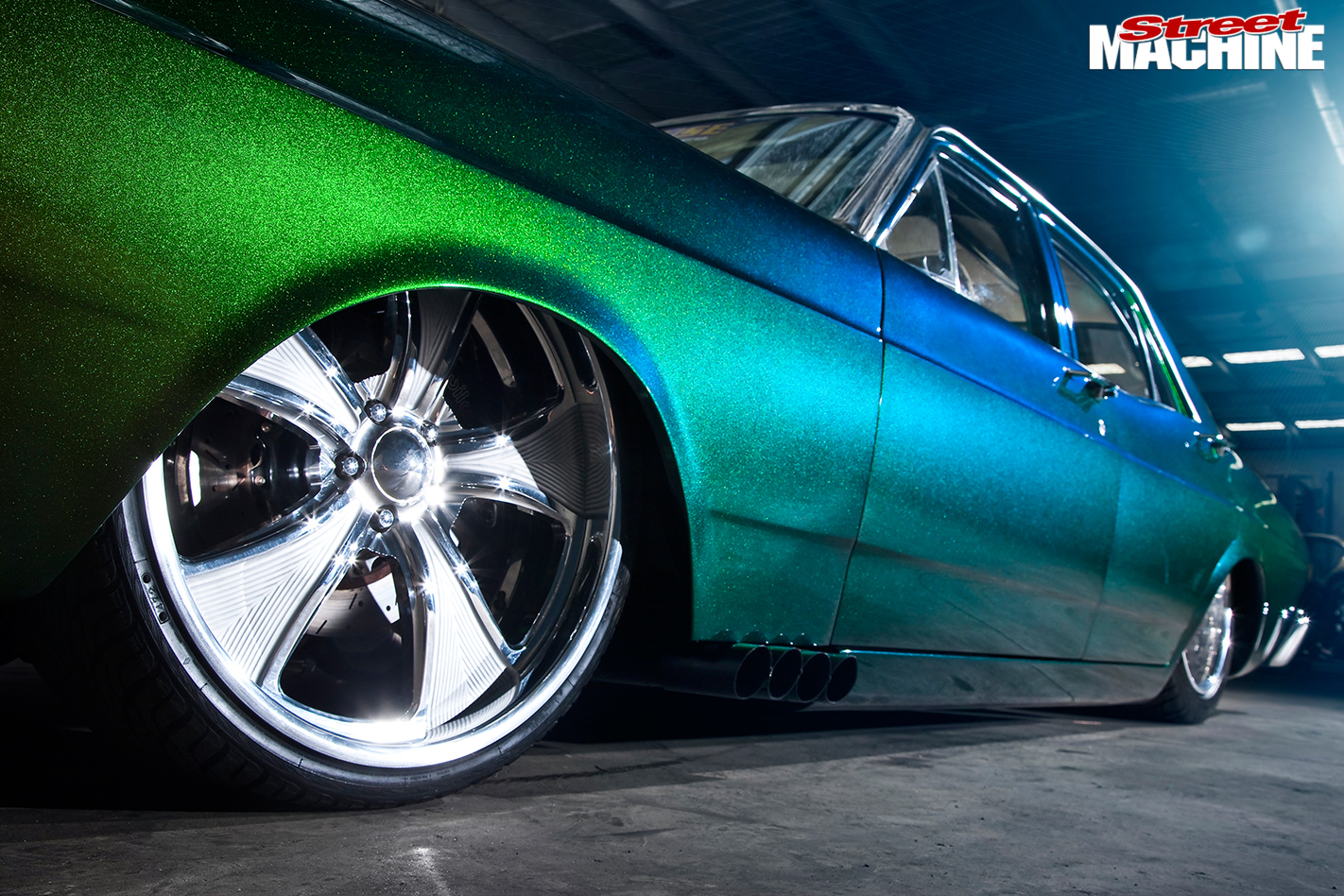 For those who have just joined this epic eight-year tale, Peter originally built this Falcon in six weeks with the help of a few mates. Back then it was dark plum in colour and had an injected small-block, back when very few people ran injection on blown cars. Nowadays everyone’s got methanol injection, but back then that was the ‘wow factor’. 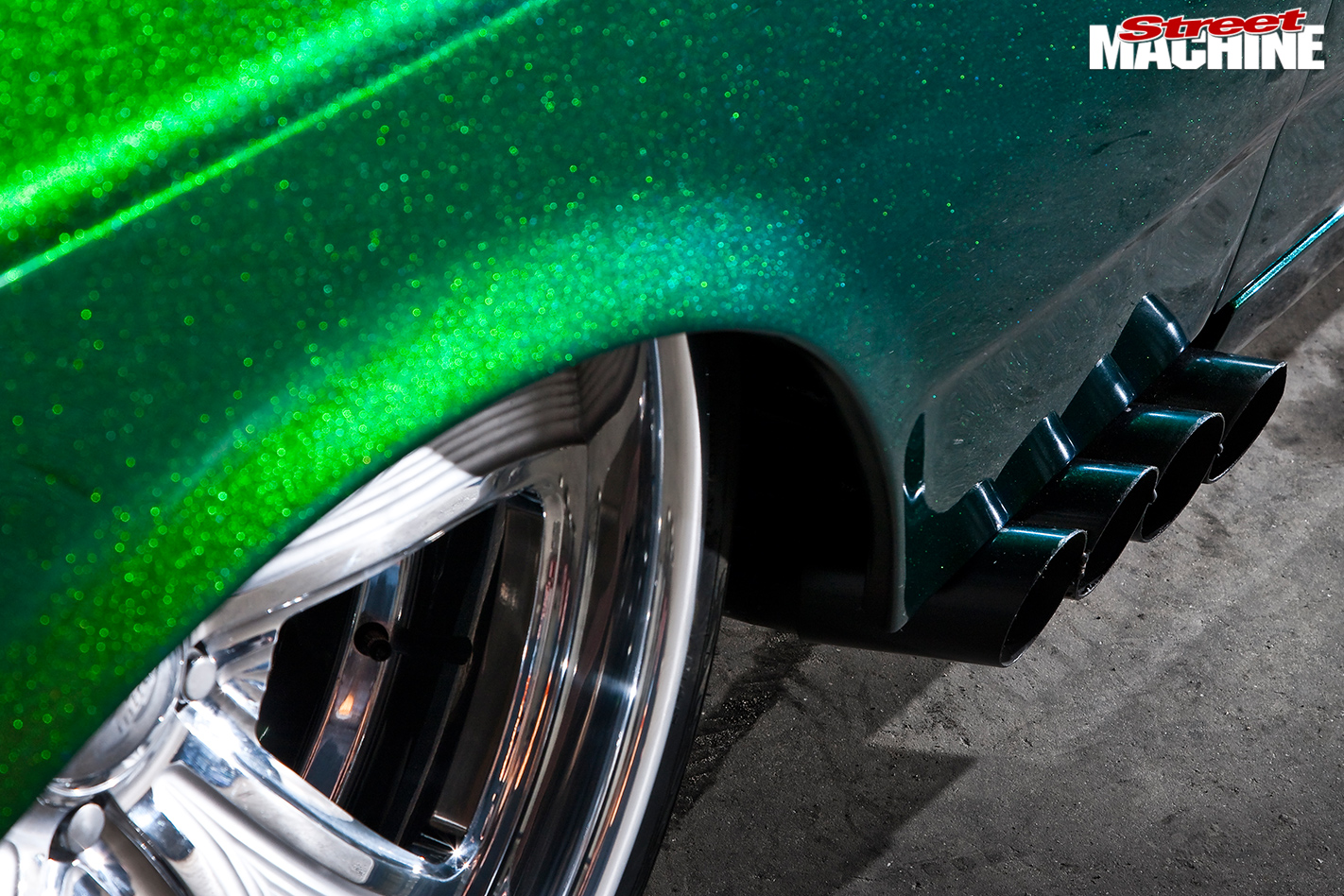 We first saw the car at one of the legendary Shepparton shed parties, where it destroyed tyres as fast as they could be bolted on. Then came Summernats and the rest is history.

But back then, ATRISK was never meant to be ‘The One’. The XR was just supposed to be a stop-gap until Peter finished building his ute, which became the blown big block-powered EVILXA (SM, Feb ’11). That went through a couple of builds itself and won a truckload of cash, but through it all Peter kept thinking about reviving ATRISK. 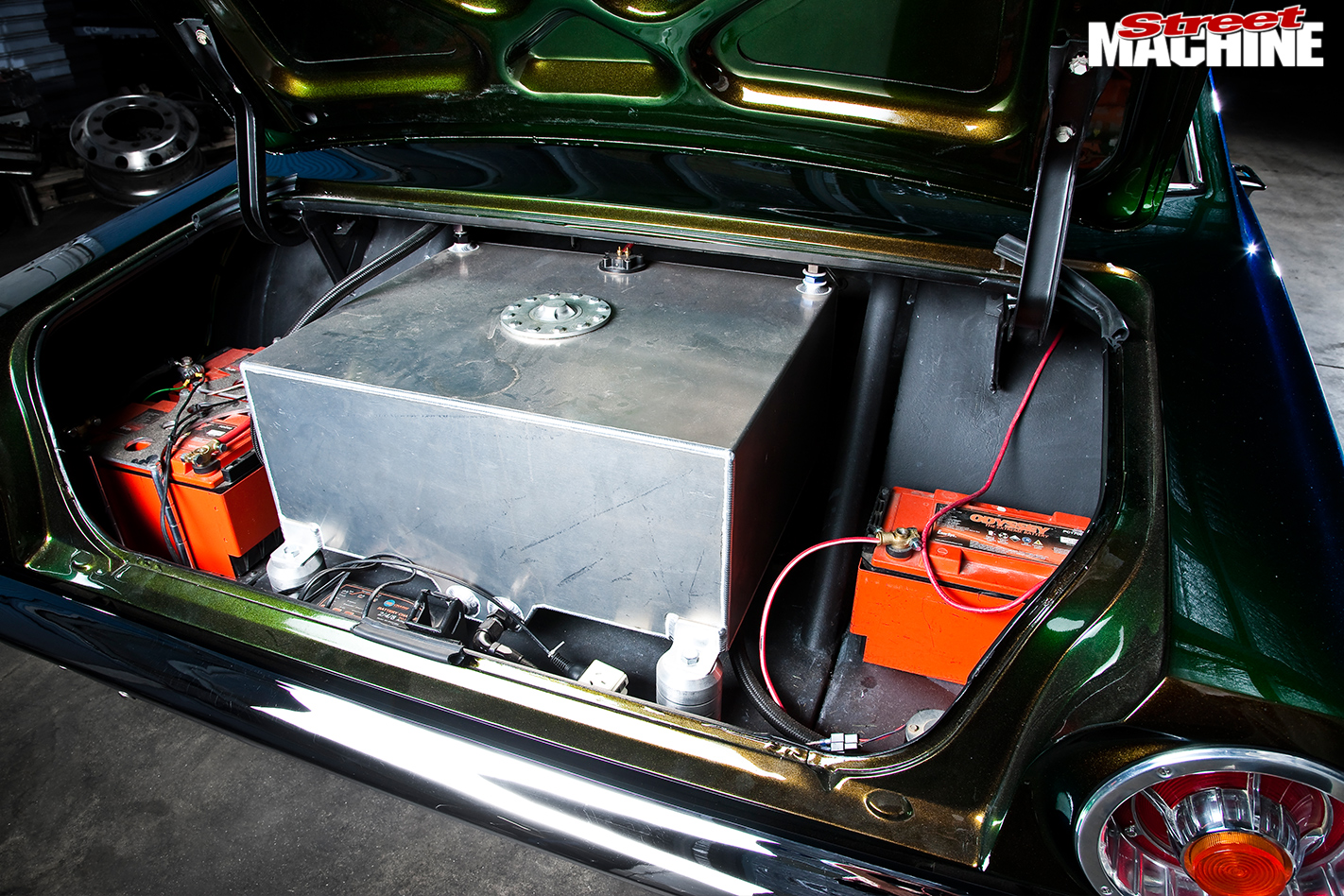 “I made my name with that car,” Pete says, “and even though I had the ute, people were always asking, ‘Where’s ATRISK? When’s it coming back?’ Everyone still asks for it. So that was something that I wanted to revamp, but it was just how far do I go with it?”

All the way apparently. Just check out the pictures. Our photographer Chris Thorogood says: “It’s the best car I’ve ever seen. It’ll be worth the price of admission at Summernats alone. After 12 hours of looking at it, I still can’t understand the paint.” 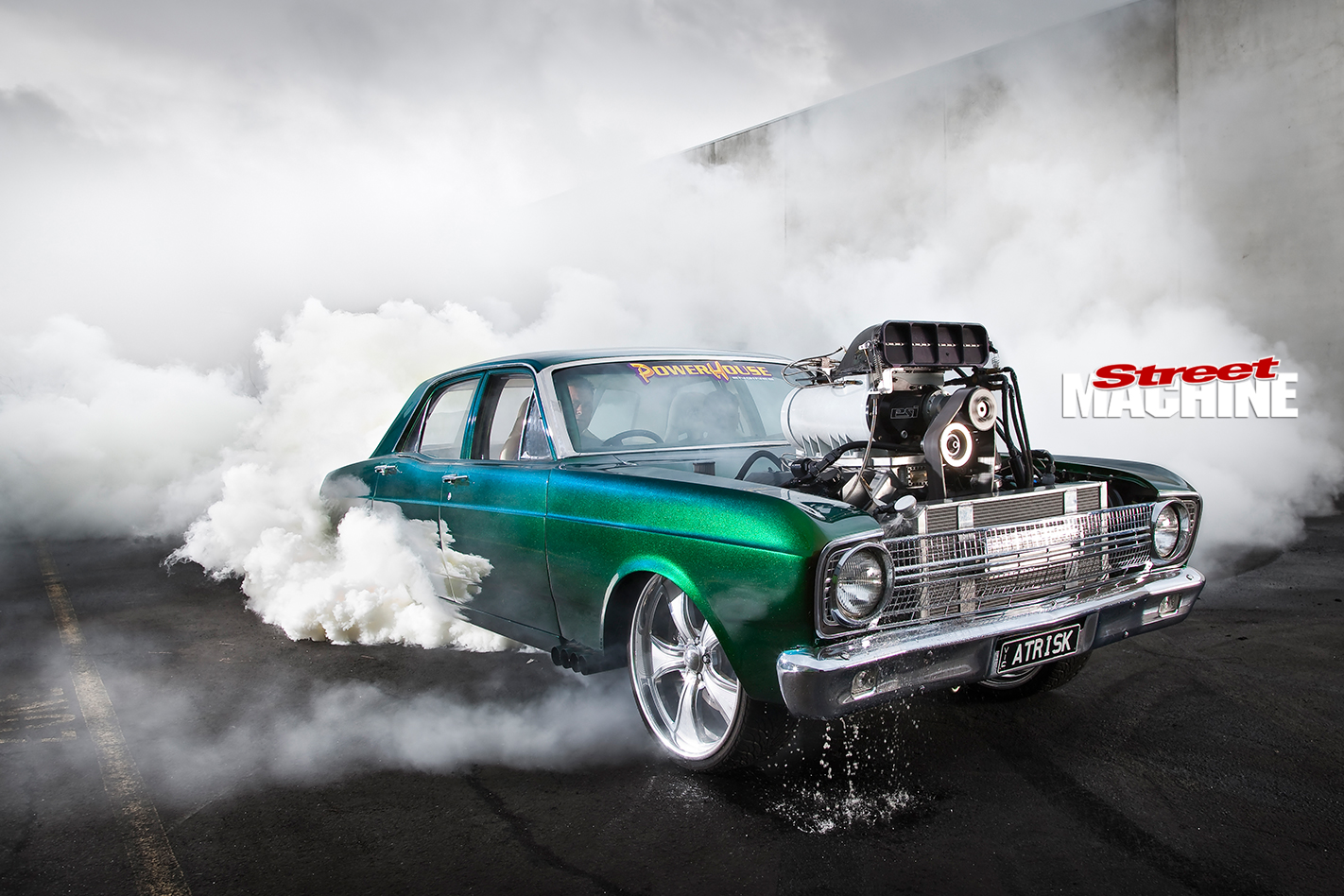 When spy shots hit Facebook, a lot of people thought the car was some kind of crazy ZERO’D clone; the yang to Mick Fabar’s yin. But Mick’s SMOTY-winning XR went all environmental, whereas Peter’s gone the opposite way with ATRISK, and the PPG Topaz is also totally different, depending on the light. It flicks from a deep bottle-green through to blue and even bronze when the light hits it full. According to Chris it was a nightmare to photograph, but a hell of a challenge too. 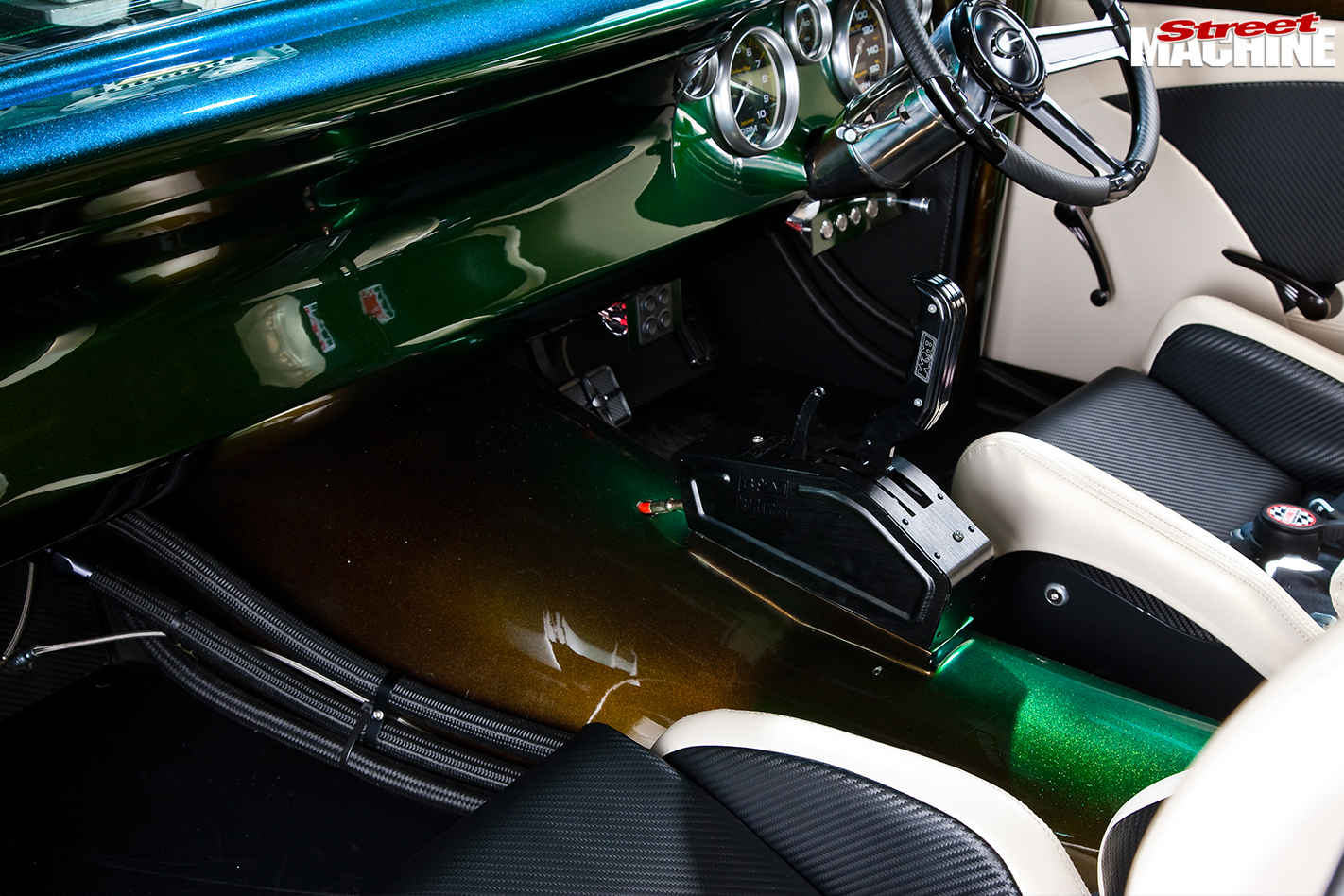 “I picked out this colour back when I did EVILXA,” Peter says. “I was nearly going to change it when ZERO’D come out, but my heart was just set on Topaz. Because this has got the green, the bronze – I like the bronze – and the turquoise blue.”

But we’re getting ahead of ourselves. Before the paint comes the body, and Pete has done a lot to the body. He had a spare set of doors for another XR Falcon he was building, and so decided to ditch the ‘no handles’ look. “Every car you look at now has shaved handles,” he says. 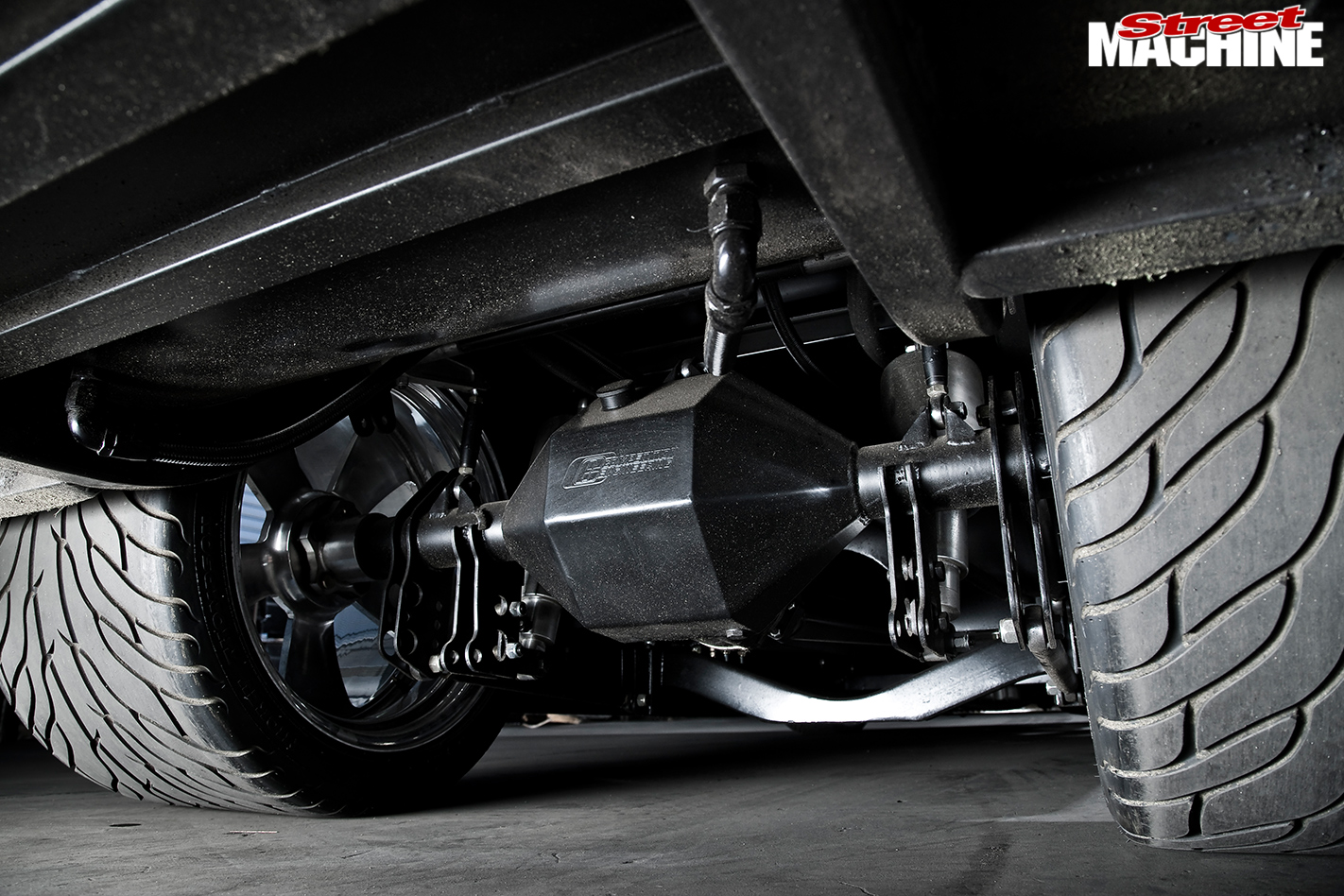 Peter cut the floor out and redid the massive tubs, along with fitting an airbagged four-link to replace the old-school leaf springs. There’s also a new fabricated tunnel, flat floor and a full cage, plus he reworked the dash and tubbed the rear doors to take the girth of the big tubs. At the front end Peter initially looked at doing a one-piece clip, but decided against it because of the associated difficulties in removing it by himself. The guards can be removed individually for access; factory suspension has also been cut out and converted to double A-arms so there was enough room for the massive donk. L&C Customs lavished bulk litres of PPG Topaz over all the surfaces except the underside. Peter says he’s not making the same mistake he made with the EVILXA ute; there’s no point doing a show-quality finish underneath a tyre-frying burnout monster! 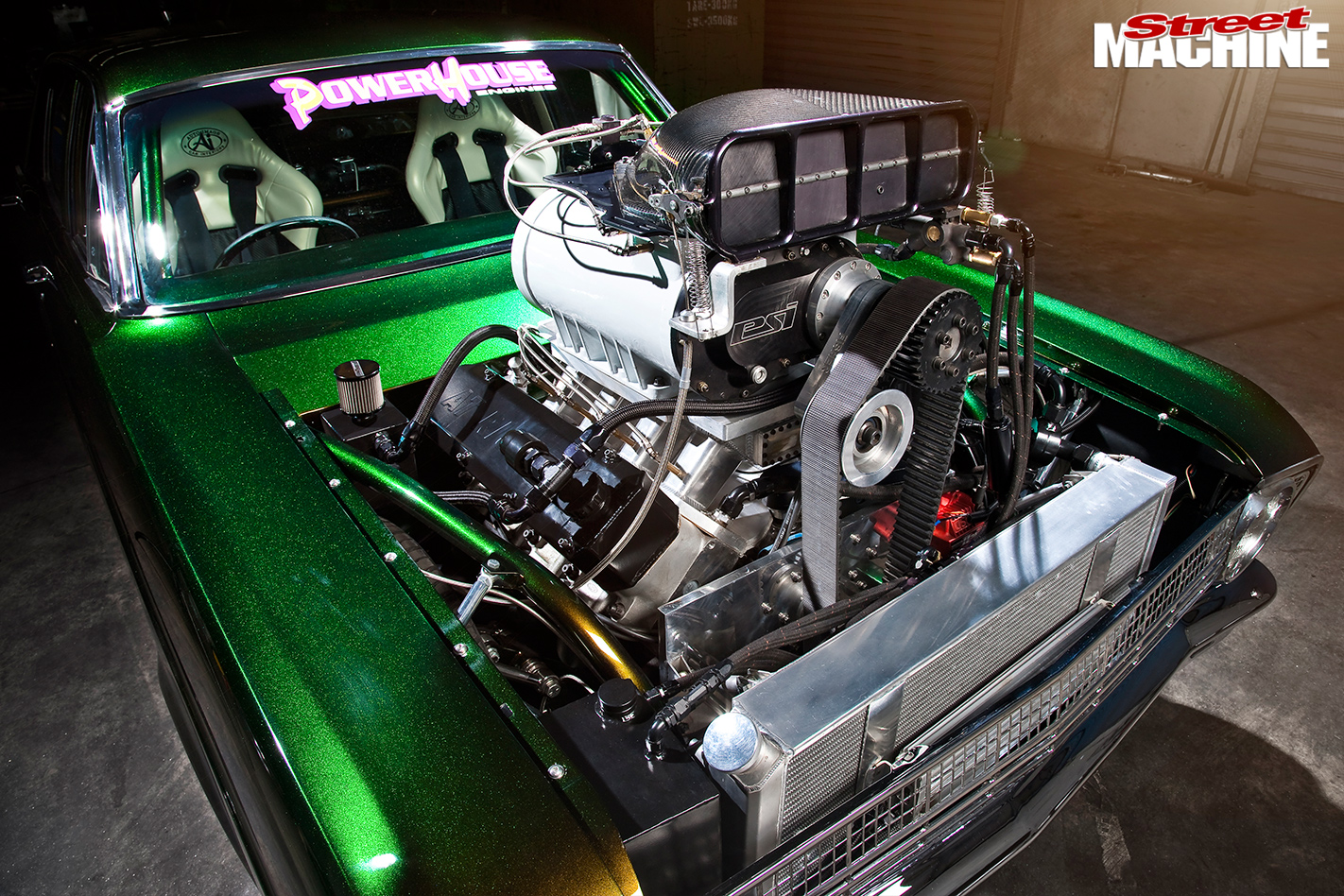 So let’s talk about the elephant in the room – the massive PSI blower and the 528 big-block underneath.

It’s all about impact. BOOM! There it is!

The supercharger is a PSI 206-D screw compressor. It’s the same unit you find on Top Doorslammers, and it is massive. We’ve seen smaller engine blocks, and it pumps enough air to inflate a building. You can’t polish the case because it’s made from lightweight magnesium and it runs billet aluminium rotors. Bought from Doorslammer pilot John Cannuli, the blower and carbon fibre hat wasn’t cheap, but Peter says it was worth it; amazingly, it bolted straight up to the existing intake. 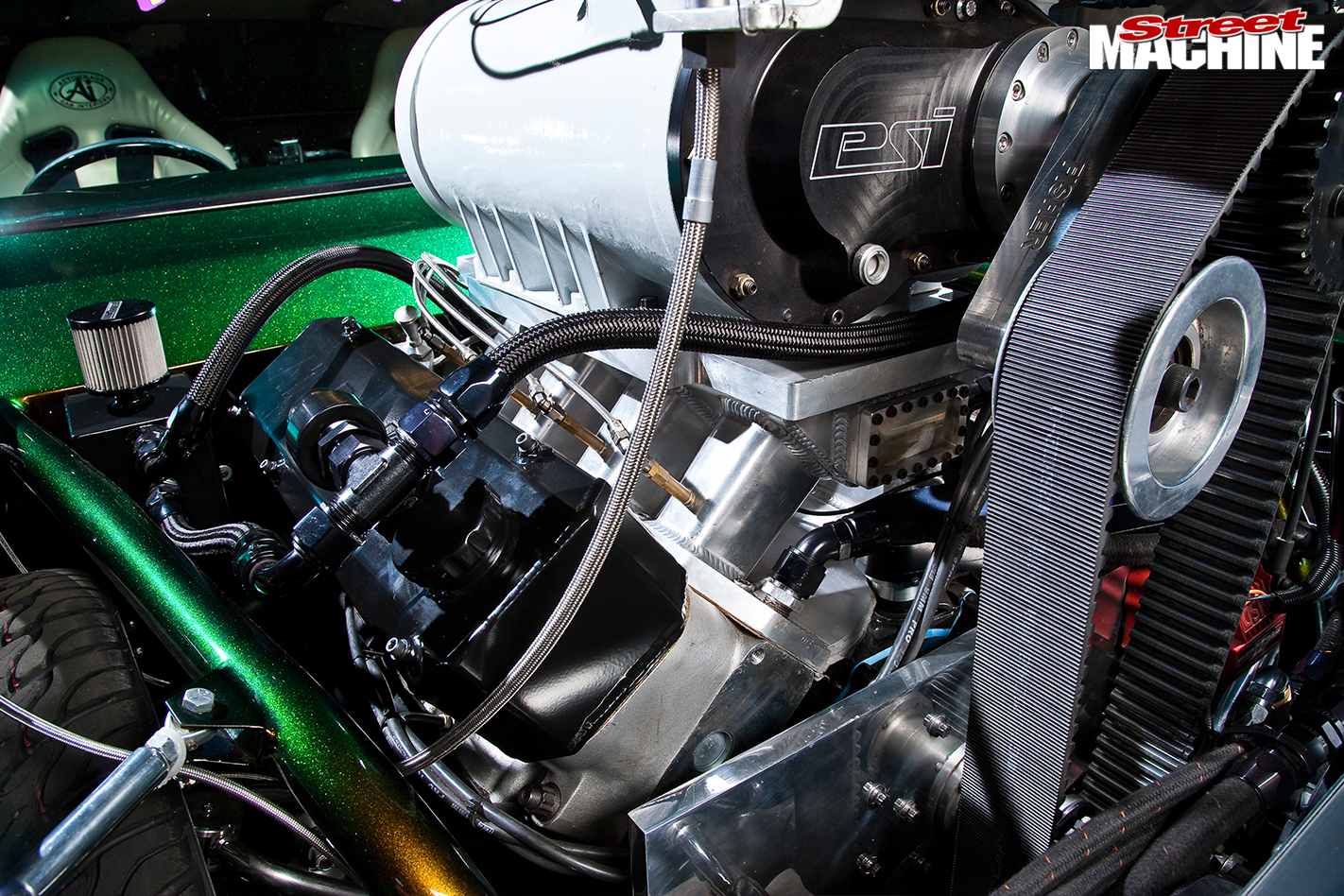 Now you can’t just put any old engine under a pump like that. Peter’s had great success with John Pilla at Powerhouse Engines, and so he headed back to Warragul for a new donk.

“I said to John, how do you think the blower’s going to go? And he said, ‘The only way you’re going to know is if you try it’,” Peter says. “It’s one of those things, you take a chance, and either it’s going to work or it’s not.” 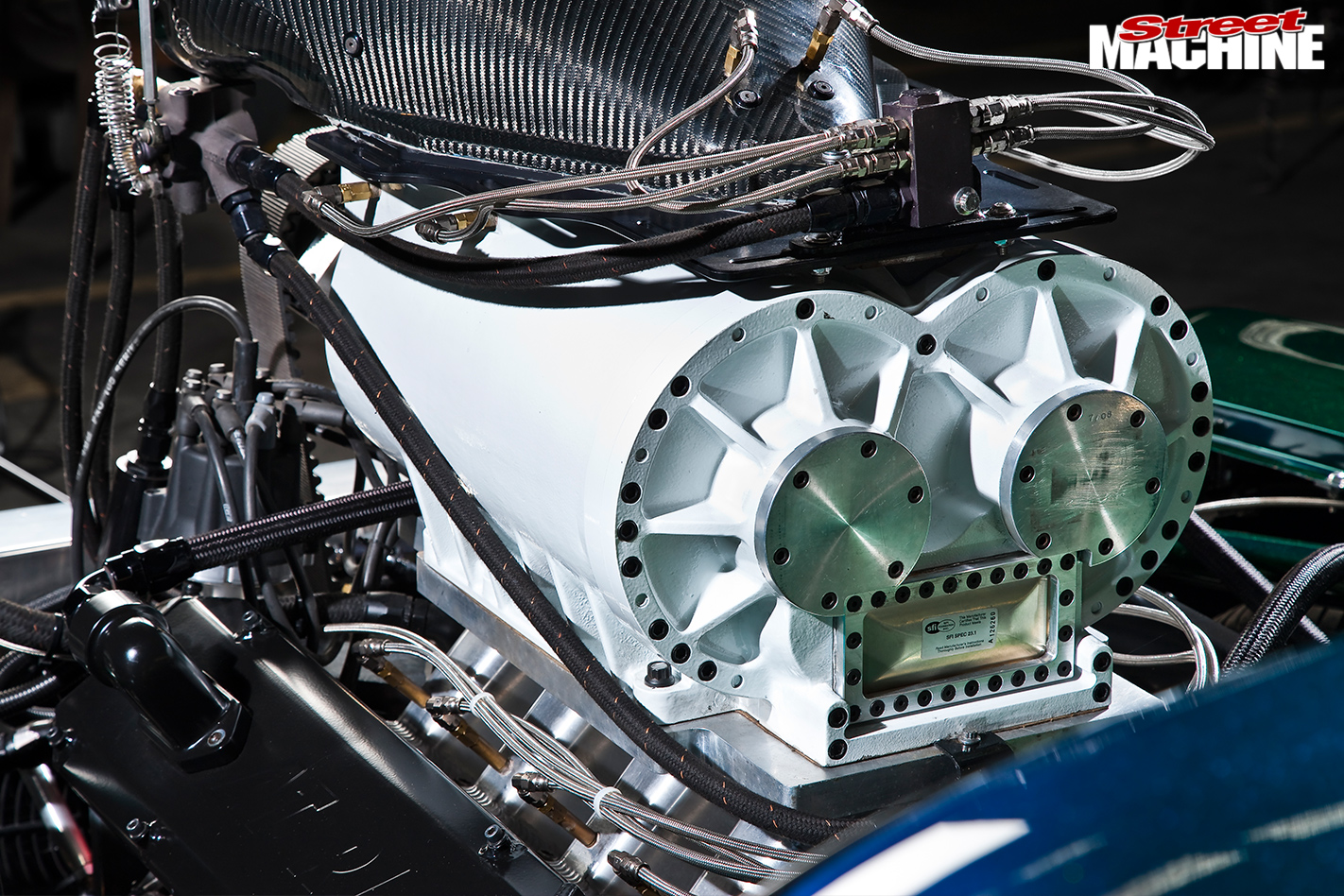 They used the block and intake from EVILXA, and not a lot else. The heads are the same C460 units, but Peter had to buy a new head after cracking one on EVILXA – hopefully that’s not an ongoing issue. They’ve gone with a Ford-style Scat crank, but the rods and pistons are big-block Chev items for ease of replacement. At 528 cubes, it’s a touch smaller than the XA’s engine, but power is obscene. Are you sitting down? Try 1806hp and 1632lb-ft of torque, which we reckon might be just enough to twist the lid off that stubborn jar of mayo. 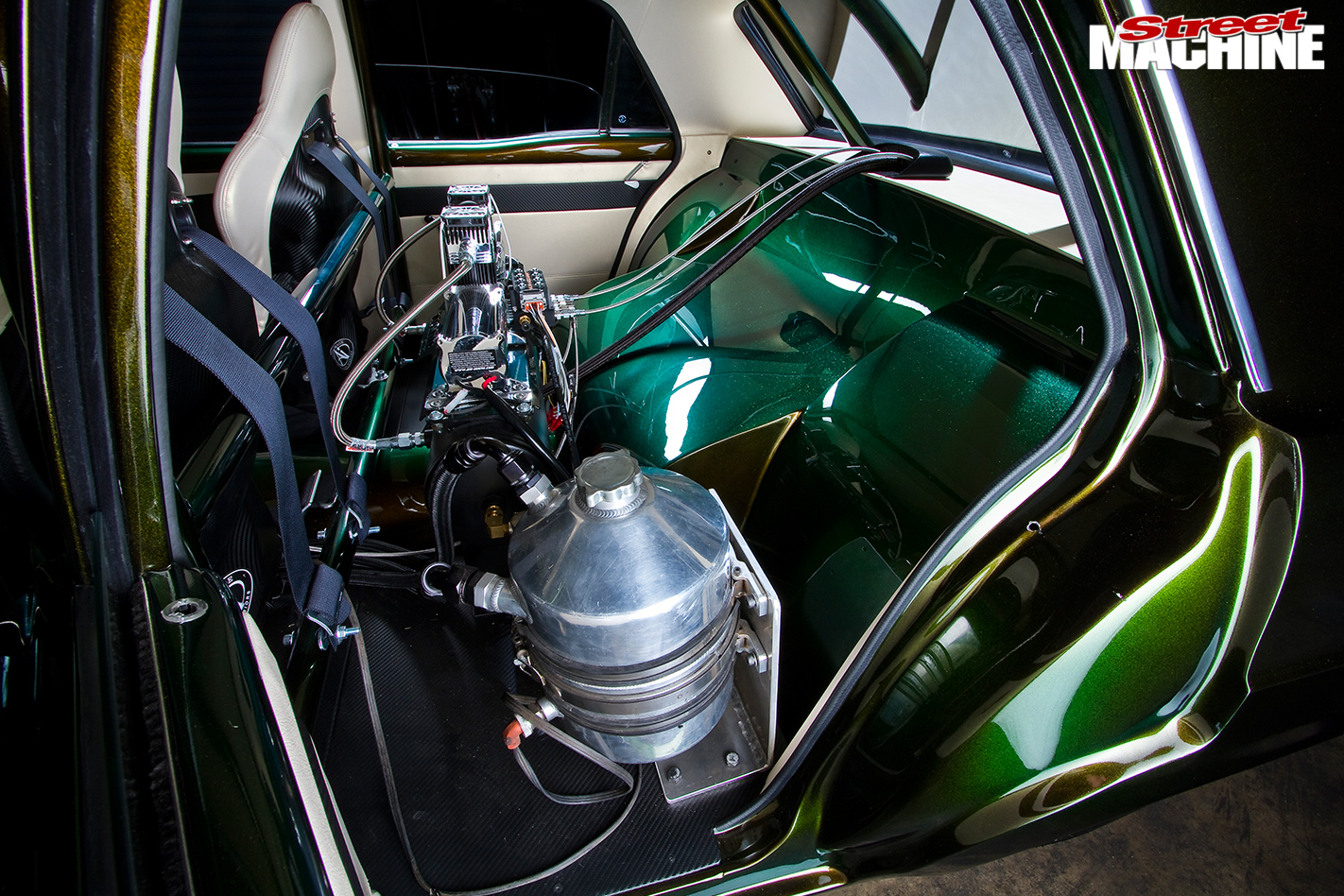 “It’s more than enough,” Peter laughs. “I don’t care about the power. To me, it’s more about making it work. We’re hoping that it’s gonna be reliable, and it’ll just go from one show to the other.”

We just pity the driveline. The freshly rebuilt Turbo 400 gave up the ghost performing the cover skid for this issue, and you wonder if that 35-spline full floating nine-inch is going to handle the punishment. 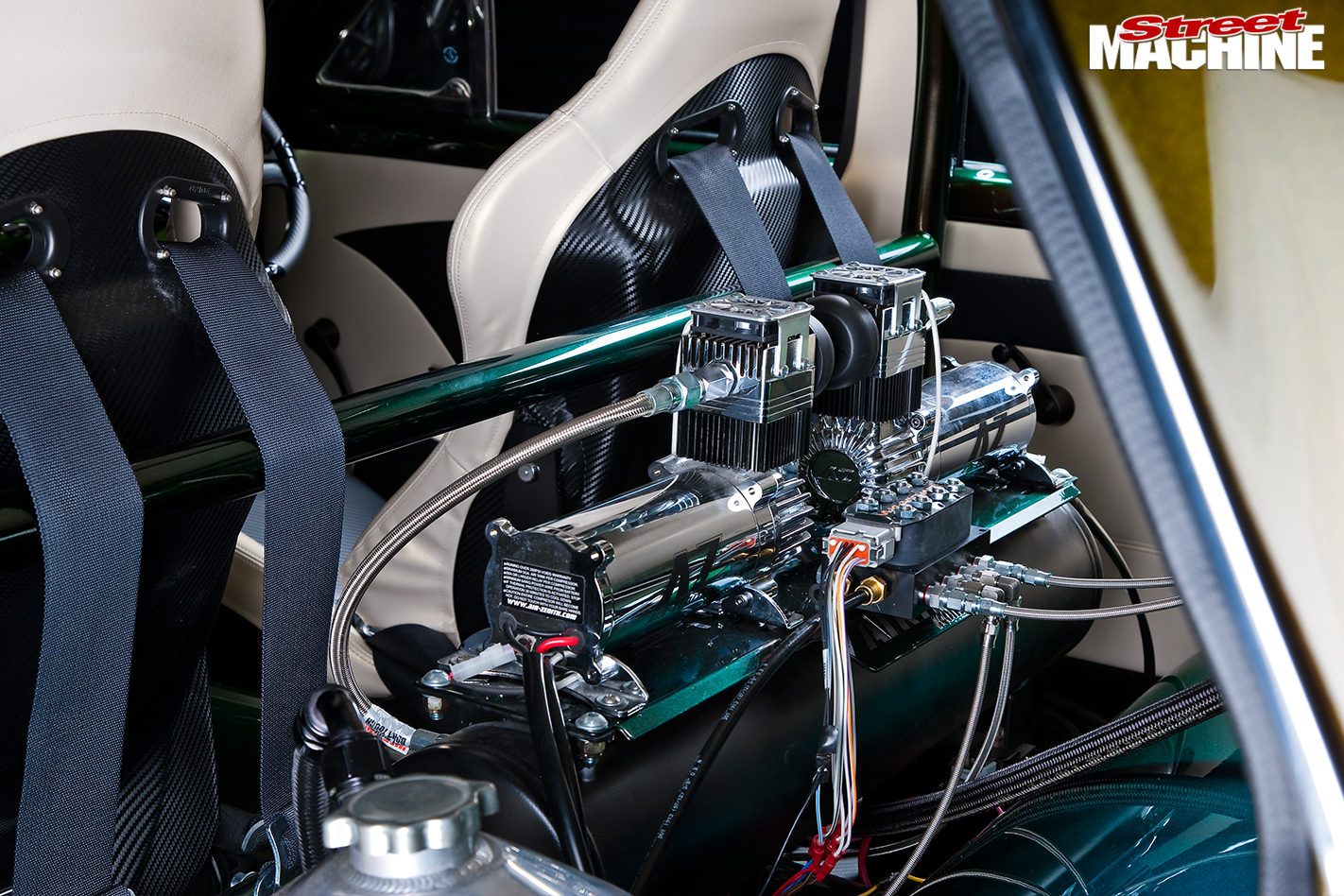 At the time of writing with just two weeks out from Summernats 27, Peter plans to defend his title the hard way.

Why is it any harder than usual? Read on. By winning Summernats 26 he automatically qualified for the Burnout Masters – but only if he came back in same car. With EVILXA sold, Peter now has to requalify, but the only qualifying event left is the Last Chance Shootout on Thursday at Summernats 27. The top three finishers from that go through to the big show, and if the buzz on the ’net is anything to go by, he’s certainly one of the favourites tipped to go through. But there’s some tough competition. It’s not going to be a cakewalk. 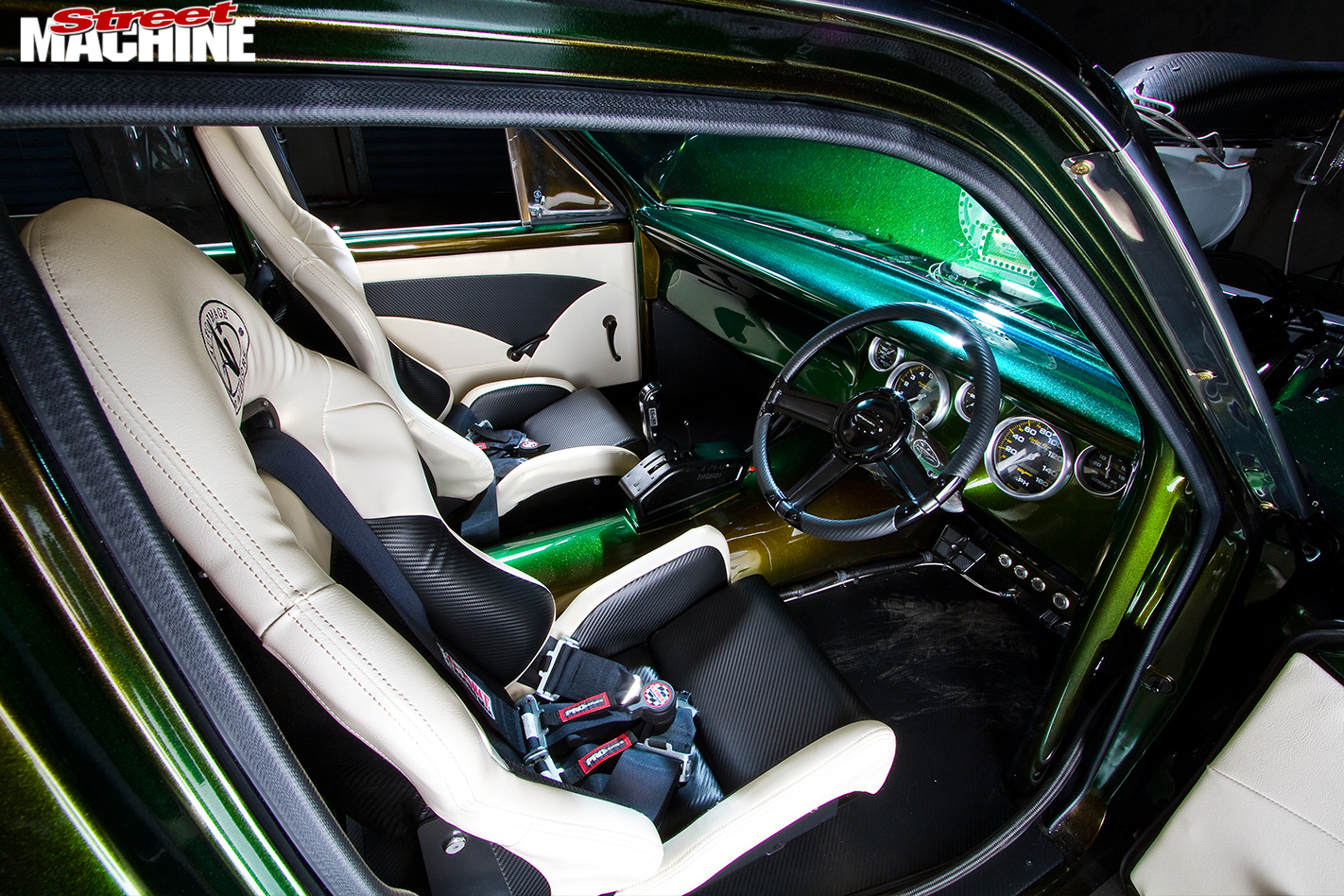 As Peter says: “I’ll go there Thursday, and give it my best. If I get top three, bonus, and if not, then I’ll still go in the normal comp and have a crack at that. You can’t go thinking: ‘If they’re going to put me in the Masters, I’m not going to go!’” 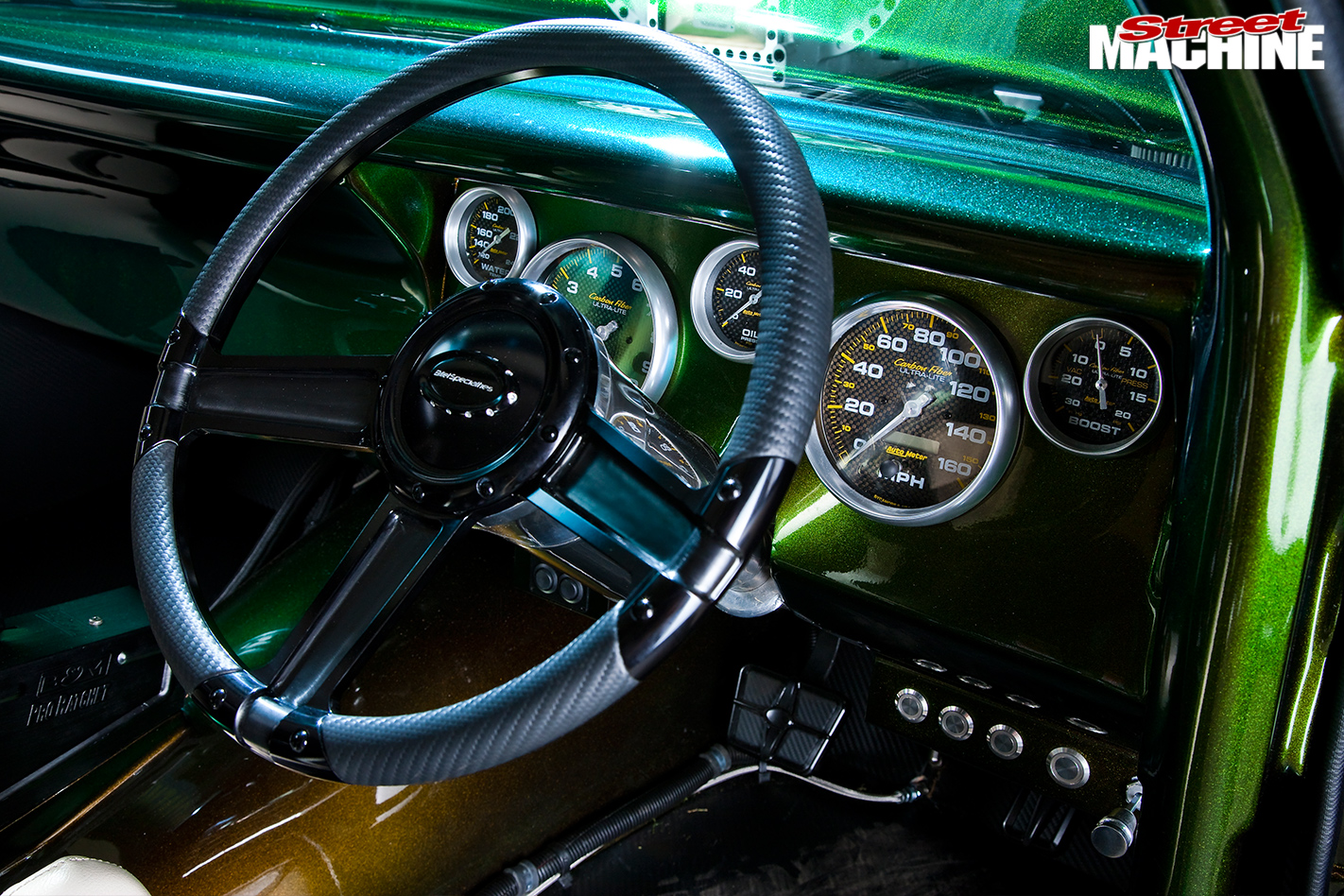