WHY chop up a renowned Torana, especially one that has won a swag of awards and burnout trophies over the years? That was the first question we had for Clint Ogilvie. 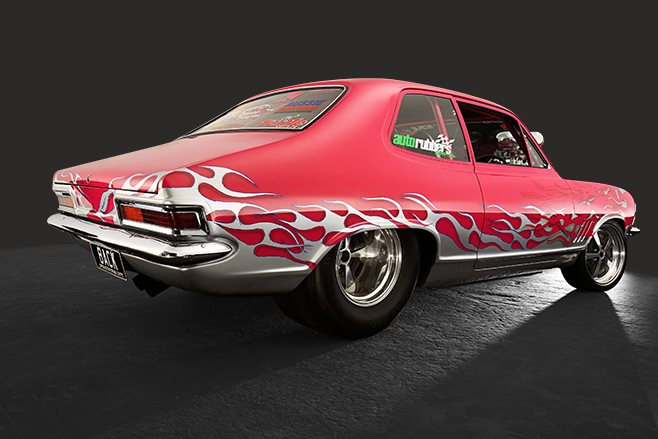 As transformations go, this was going to be a big one. Not content to just strip the car down to a bare shell, there was some major nip and tuck surgery planned and Clint turned to Troy and Luke Kinsmore at Slamed Creations.

“They’re a couple of young blokes, both in their 20s, but they’re unbelievable — like young Chip Fooses. They’re right on the cutting edge of the scene,” Clint says. 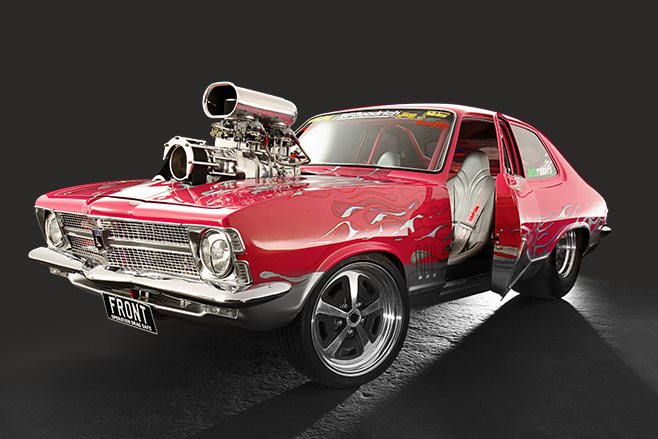 Out came the whole rear end, floorpan and all, and in went a custom sheet-metal diff suspended by Aldan coil-overs on a custom rear chassis clip. Of course, the old mini-tubs were given the flick too, replaced by much larger units with rolled shoulders.

“We needed the bigger tubs because we were sick of smashing the quarters off it and I want to race it at some stage so it needed a ’cage as well,” Clint says.

And the suicide doors?

“Well, my idea of a hot rod is black, blown, flames and suicide doors. We couldn’t have black but we’ve got everything else.” 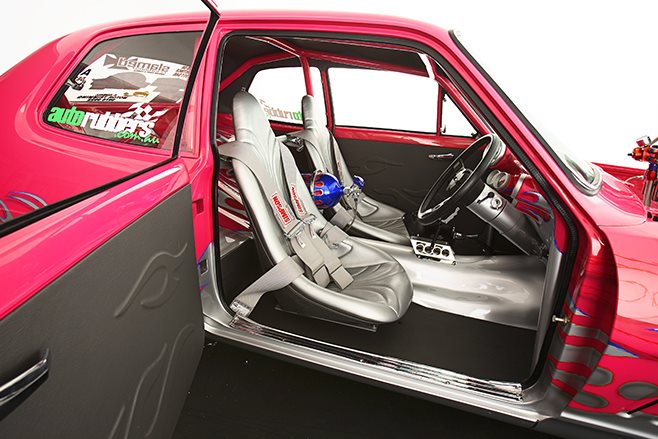 The old front buckets have been replaced by a pair of trimmed Hornet race seats. Also gone is the back seat for a pair of massive wheel tubs. How good do those suicide doors look?

Clint is super-impressed with the work the guys did on the car: “I can’t speak highly enough of them.”

You can see why from the photos — this wasn’t just a simple tub and ’cage job. Run your peepers over that smooth body and you’ll notice what’s not there rather than what’s been added. No door handles or locks, no drip rails, no side markers and no wiper holes or even wipers. The wiper motor and heater box are also missing, along with the fuel filler. On either side, the rear guards were stretched to accept larger diameter rubber and the trans tunnel has been raised and widened to allow the Torana its lower stance. 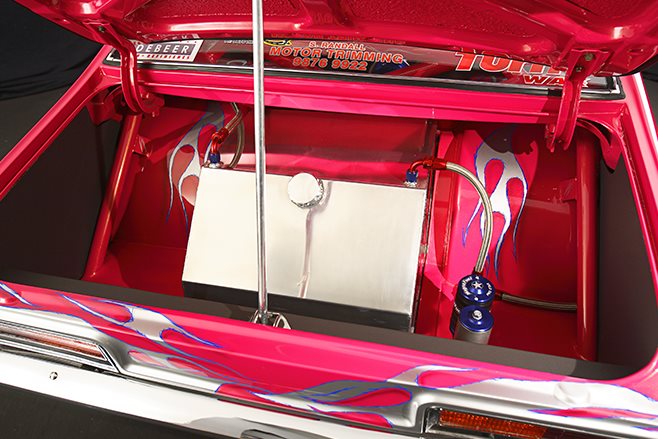 You may ask how a wider trans tunnel can get a car lower to the ground. Well, it’s to allow the exhaust to be tucked up next to the drive shaft so that nothing hangs below floor level. Flat floors have also been welded in for a clean, smooth look from above and below.

After Troy and Luke had finished with the metal-work, it was time for the paint — which they also handled. Talk about your one-stop shop.

Clint had a paint sponsor lined up, but it all fell in a heap at the last moment, so Reese from The Bodyshop in Bayswater came to the party with some custom-mixed De Beer paint. 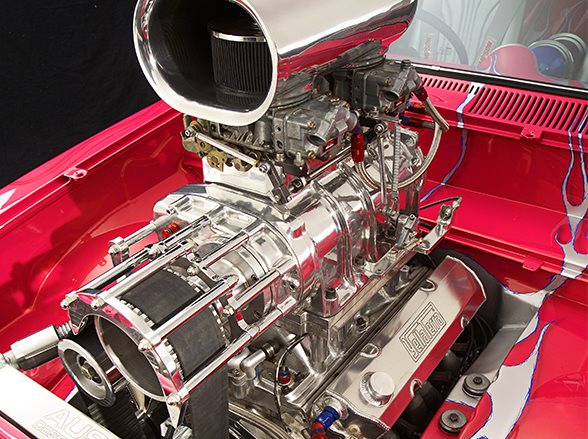 Pink, with silver flames and blue highlights, stretches from the front to the rear with a look that maintains the car’s personality while giving it a fresh new look.

So the shell arrived freshly painted but otherwise naked on the Thursday before Christmas — how’s that for pressure? Not only do you have to assemble a whole car in just two weeks for Summernats, but you also have to do it while most businesses are having their holidays and therefore not make any mistakes that could bring the whole deal to a grinding halt.

At this point, Clint would like to give a big thanks to his mate Adrian Johnson: “If it wasn’t for Adrian the car wouldn’t have got to Canberra,” he says. “There’s another bloke that needs a big plug, too — Steve the trimmer. Apart from the fact that he’s done a superb job, we dropped it off just after Christmas and he trimmed the car in two days.” 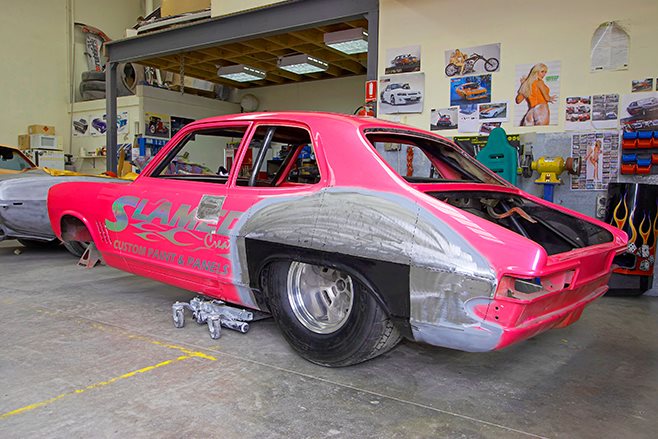 Apart from the new sheet-metal diff, the rest of the driveline remains as before — 304 cubic inches of blown Holden V8 and a full manual Powerglide. Speed Works freshened up the bottom end, making sure the Yella Terra-headed combo was ready to do its bit for yet another Summernats. Clint had some trouble with the blower though — it seized just before they left for Canberra.

Luckily Clint’s dad is a revhead too, and he had a blower sitting aside for his hot rod. Clint borrowed that but it wasn’t suited to the task — there’s a big difference between street blowers and blowers for high-rpm burnouts. At Summernats Clint swapped blowers with Gary Myers for the duration of the show. The blower from the black Mustang was fine for burnout use while Clint’s father’s blower was fine for cruising. With the black Muzzy not doing any burnout work it was a no-brainer to swap them on Thursday morning at Summernats 21, while the girls (Robyn Ogilvie and Deby Myers) polished the Torana. 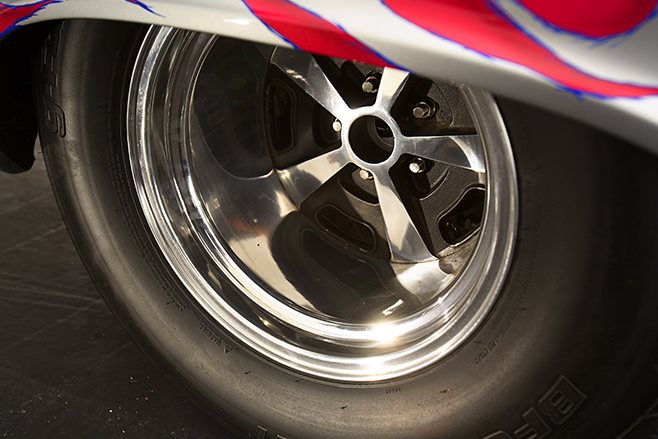 How about those wheels? Cool huh? They’re Oldskool Muscle Wheels from Longbeach Customs and they dial up at 17x7 on the front and 15x12 at the back.

“I wanted to go for something other than big billets and these look very much like the old Sprintmasters,” Clint reckons. “I’m rapt with them.”

When it’s time to make smoke, Clint bolts on a set of old 17in 4x4 rims to keep the four-link off the ground when the tyres pop — 15in rims just don’t cut it. You’ve got to think of these things in the burnout game.

As for Summernats, despite the rush everything fell into place. Clint managed second place in the Burnout Masters and the car cleaned up beautifully for the Top 60 hall on Friday night. 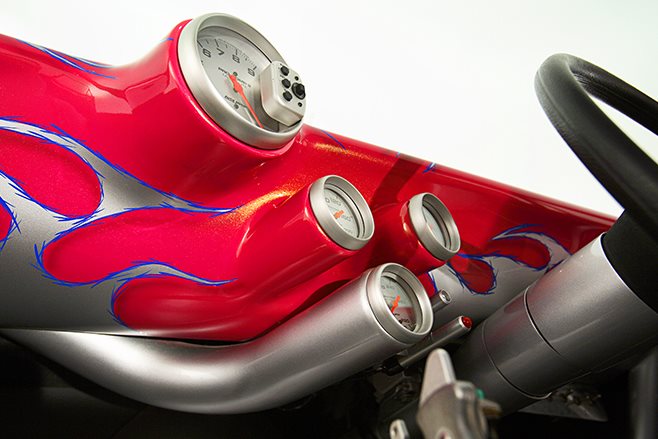 Slamed Creations did a great job with the dash and the gauge pods. It’s all steel – no fibreglass anywhere

“I was really happy to get in the Top 60,” Clint confesses. “For a shitty burnout car I reckon that’s not too bad.”

It doesn’t stop there, because now Clint’s talking about going blown and injected. He wants to stick with a Holden-style block with a few more cubes, “Something we can zing up to nine grand,” he says. “We’re not going to rush into it though, just get it sorted and have some fun.”