THE VL Commodore is a model that sits firmly in street machining’s limbo land. It’s too young to rank as traditional metal and, 15 years on and especially in carb-fed, 304ci form, too old to lay any claim to modern techno status. 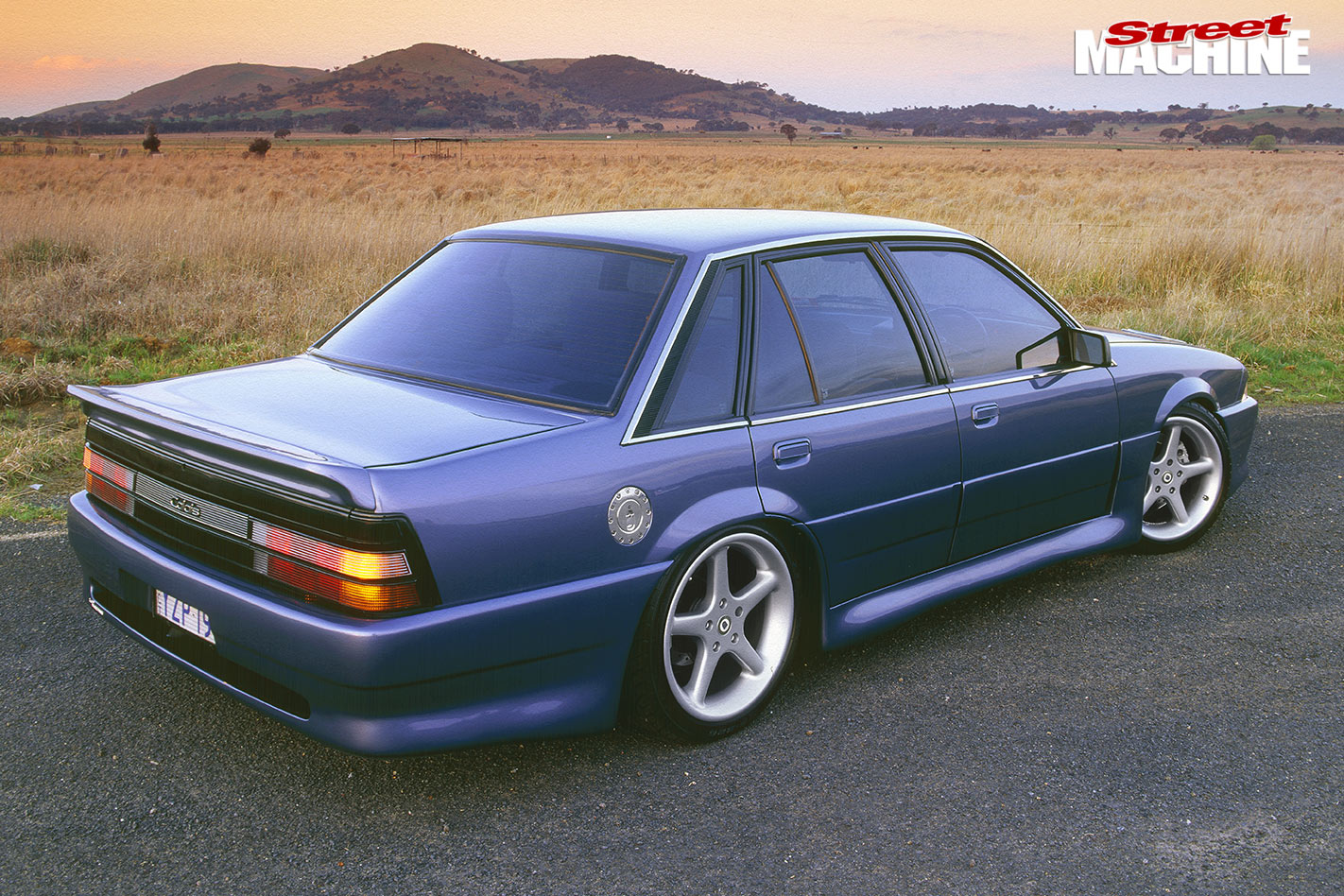 So you’d reckon the VL would be street machining’s unloved bastard-child that everyone conveniently forgets, right? Not a chance – punters love them, bolting together countless thumpin’ V8s and sizzling turbo sixes every year.

Still, traditionalists question whether the VL – or any late-model modified Aussie muscle, Holden or otherwise – is really worthy of street machine status. 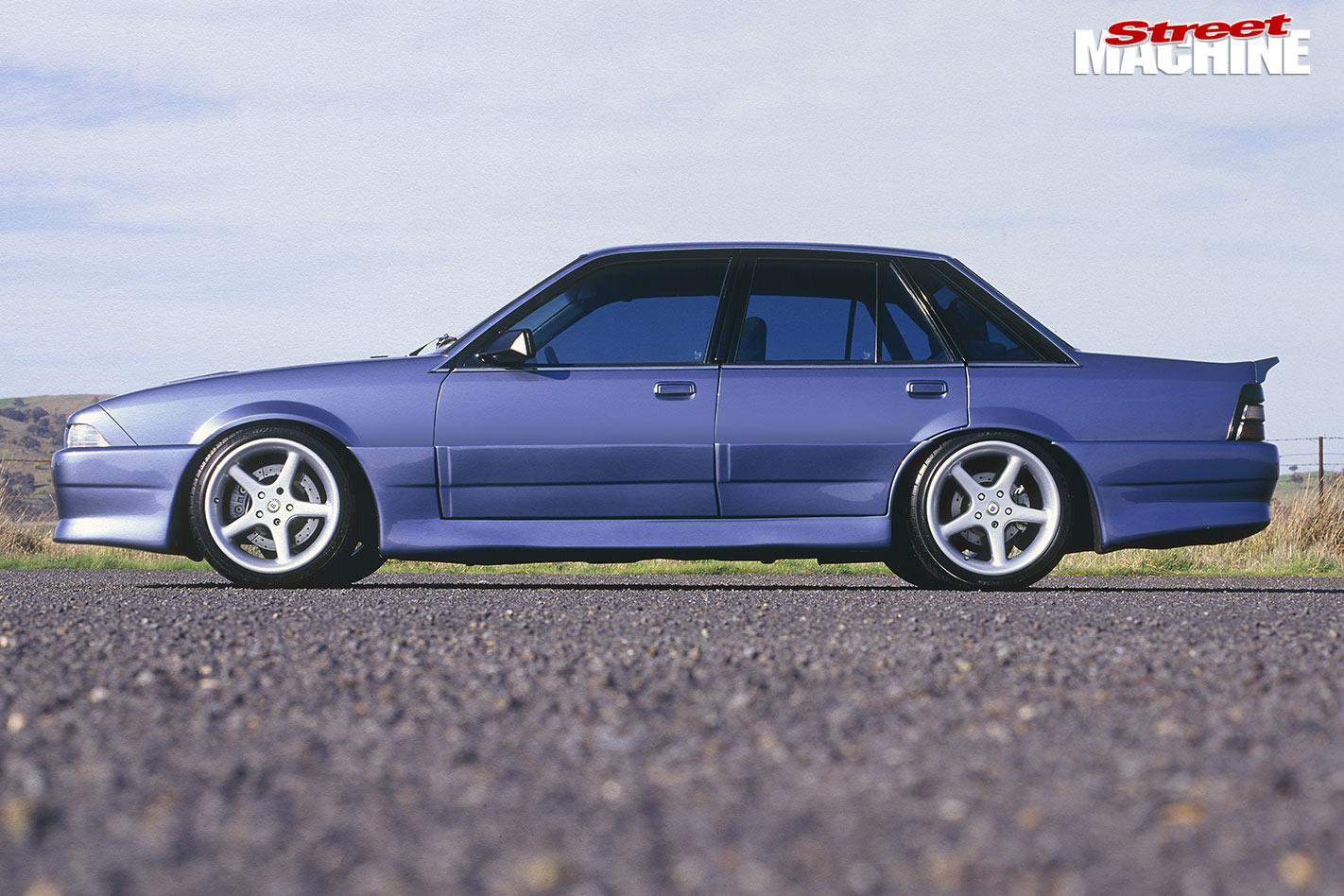 Here's a neat but simple paint trick that’ll add to the impact of your ride. Rather than use straight silver for engine detailing, Steve mixed a small percentage of Aqua Pearl into a basic silver base for a subtle colour-coded engine bay that matches the bodywork. The 18-inch wheels benefit from a similar approach, but with a stronger blue component in the mix.

We reckon it’s down to execution. Well-crafted VLs – such as Jeff Briffa’s killer effort (SM, July/August 1999) – are few and far between, especially ones with huge herb plants to back up the finish. When a car as exceptional as 24-year-old Steve Santos’s Calais emerges, the sport takes notice, as this blown beast must rank as one of the best VLs ever. 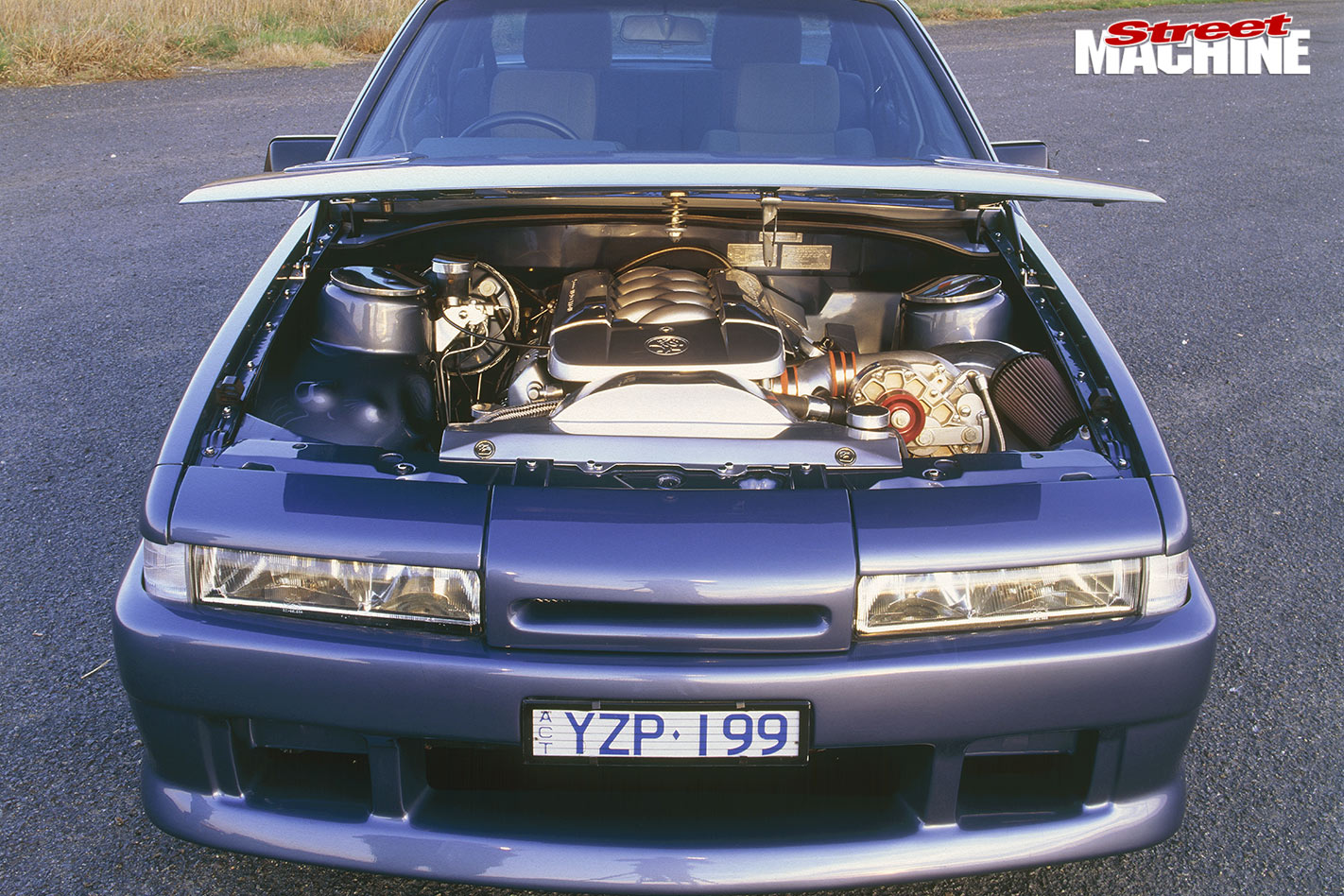 Plenty of the VL Calais’s finest attributes, such as the centrifugally blown EFI V8 and smooth, new-school styling, are quite obvious.

But there are also a load of less conspicuous tweaks that have come in the later part of its continuing evolution, two years after it hit the scene minus the supercharger.

Steve is a self-employed carpentry contractor, which explains a lot about his approach to building this prized ride. If his crafting skills can put food on the Santos table, then they can also bring home a swag of trophies for the living-room cabinet. 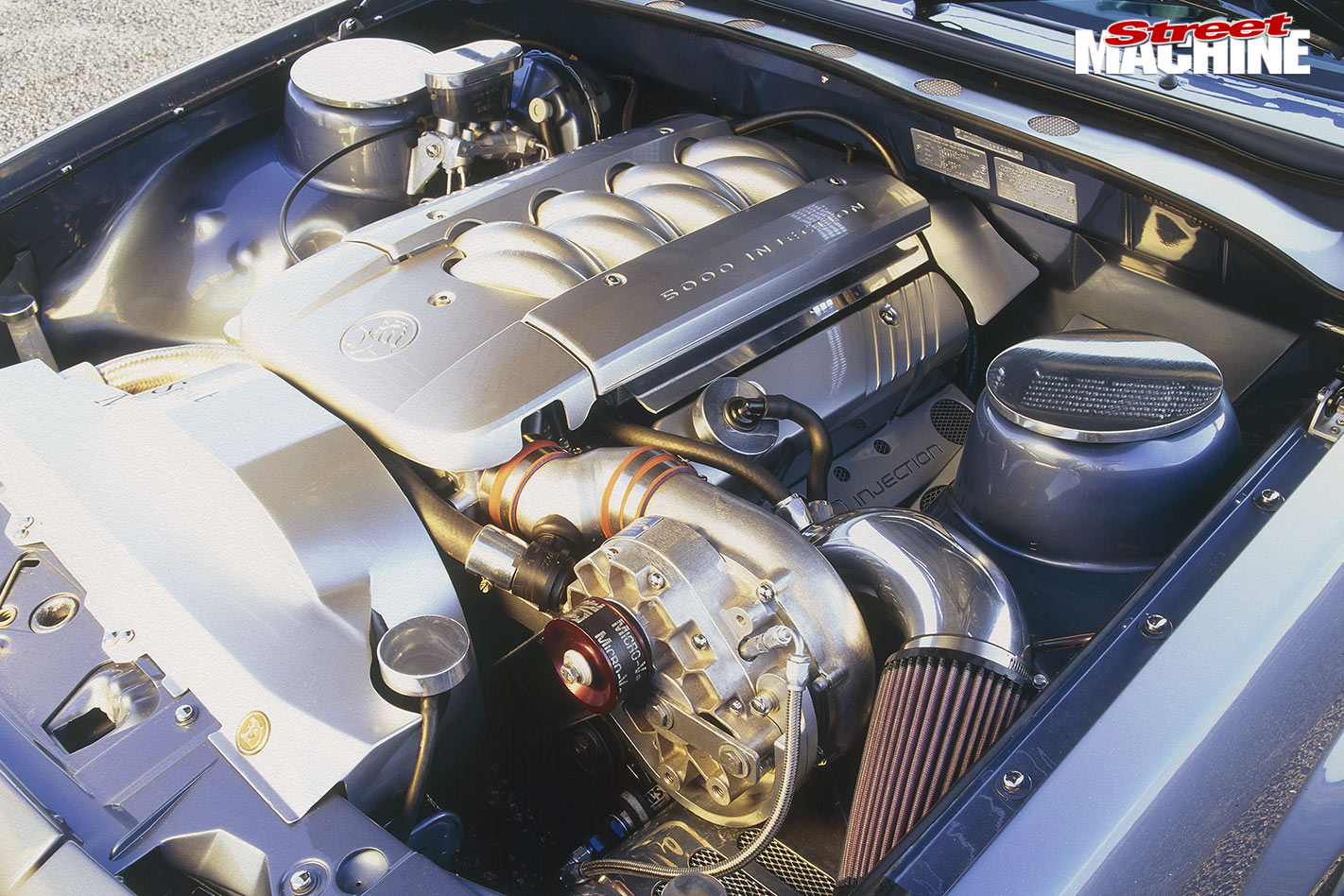 Other panel detailing includes the removal of the door locks and aerial aperture, and the addition of that cutting-edge cool-looking aviation fuel filler. The innovative bonnet ventilation treatment uses two Cosworth Sierra extractors that have been rotated backwards to pump cool air into the engine bay. Neat stuff.

The thing definitely passes the 50-metre visual test. The VL body wears a curvaceous but tricky-to-fit Aero-style bodykit, which needed plenty of work. The kit’s seams and joins have been smoothed to a buttery effect after the flanks were pumped out by 15mm to gain the necessary tyre clearance. 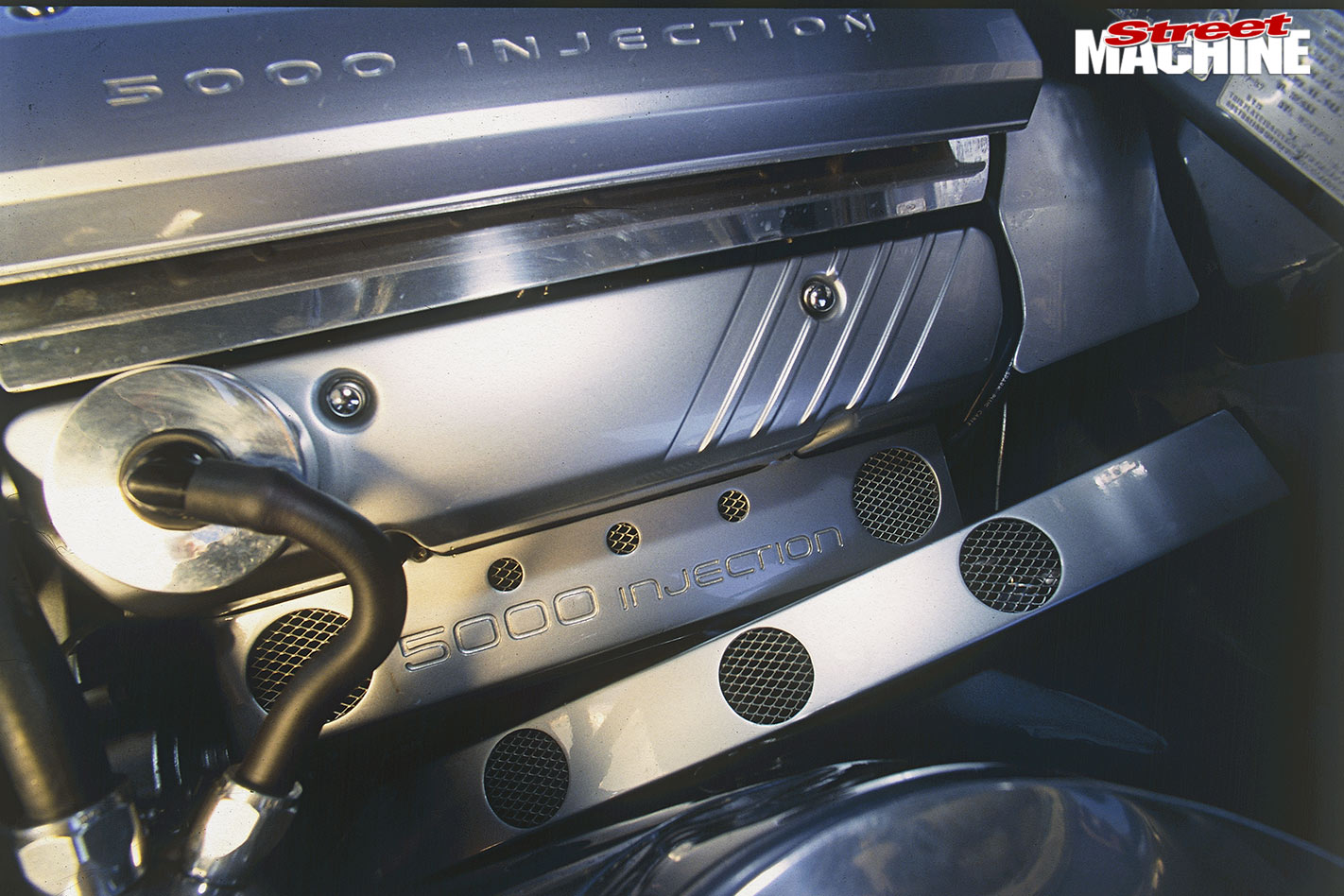 Steve and painter/body artist Gil O’Leare claim credit for the exceptional work, which has been drowned in a subtle shade of Volvo Aqua Pearl, a colour that should still look contemporary long after the current wave of Tiger Gold becomes decidedly last year. 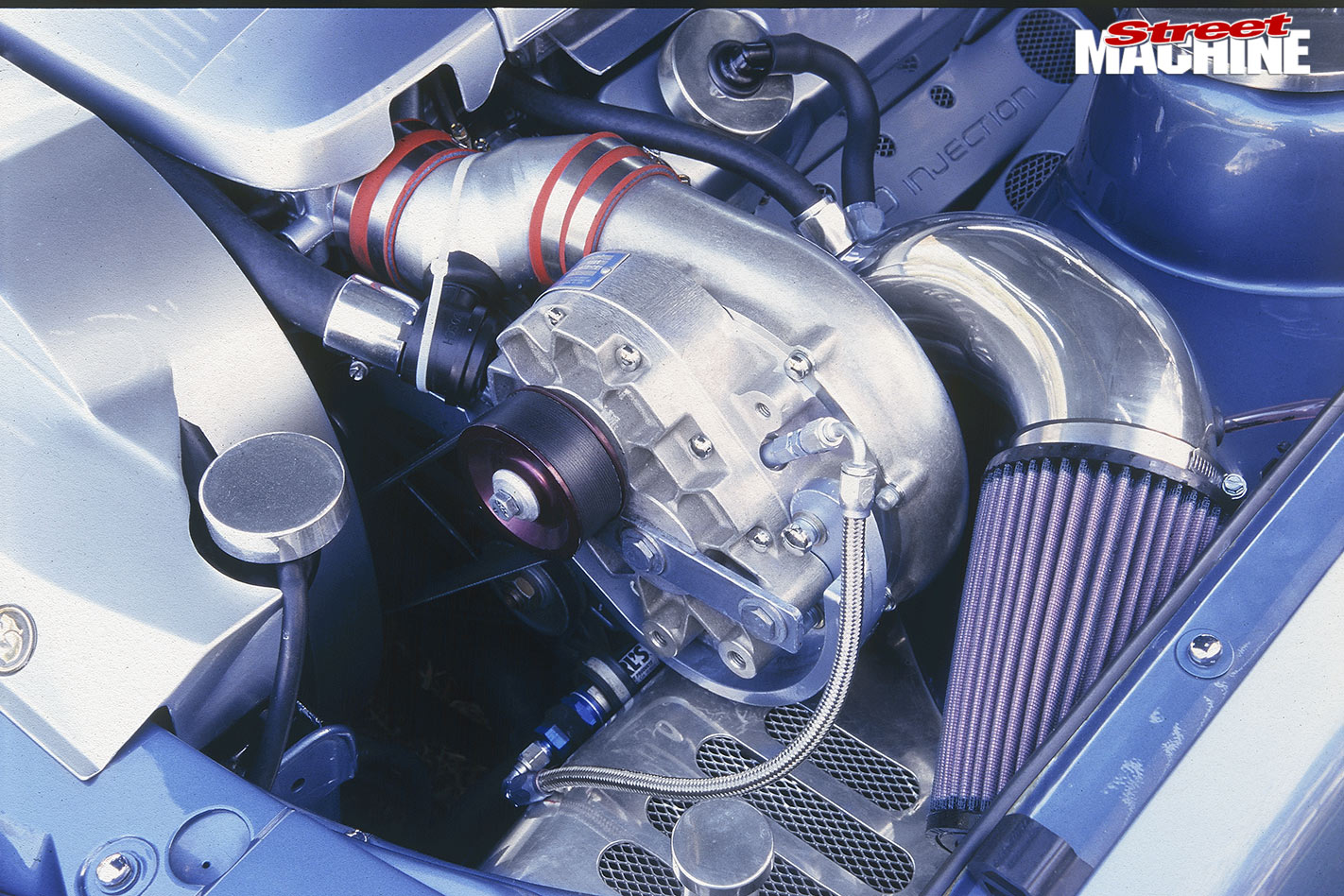 Under the bonnet, the engine bay is a spectacular, chiselled piece of blown General Motors V8 artwork, decorated with some of the coolest aluminium detailing you’ll find. Steve created the strut tops and various caps by routing aluminium blocks himself. The radiator shroud, blower water-injection tank, exhaust shields (modified EFI V8 induction covers) and steering shaft cover are exquisitely hand-formed using sheet alloy and mesh. As for chrome, there’s not a single drop in sight. As his ticket to gut-wrenching grunt, Steve took the stroker approach.

The VP-generation EFI donk uses an offset-ground 330ci crank, spinning Chev rods and Zolona pistons. It’s force-fed up top with a big 11psi Vortech centrifugal supercharger. A truckload of other gourmet internals, along with some deft engineering by Tony Tzafaris, skilful AC Delco management and tuning by precision injection are all keys to creating a whopping (claimed) 280kW at the bags. The windage-tray sump and a surge tank-modded fuel set-up provide vital fluid supply during adventures into high-G lateral loading. 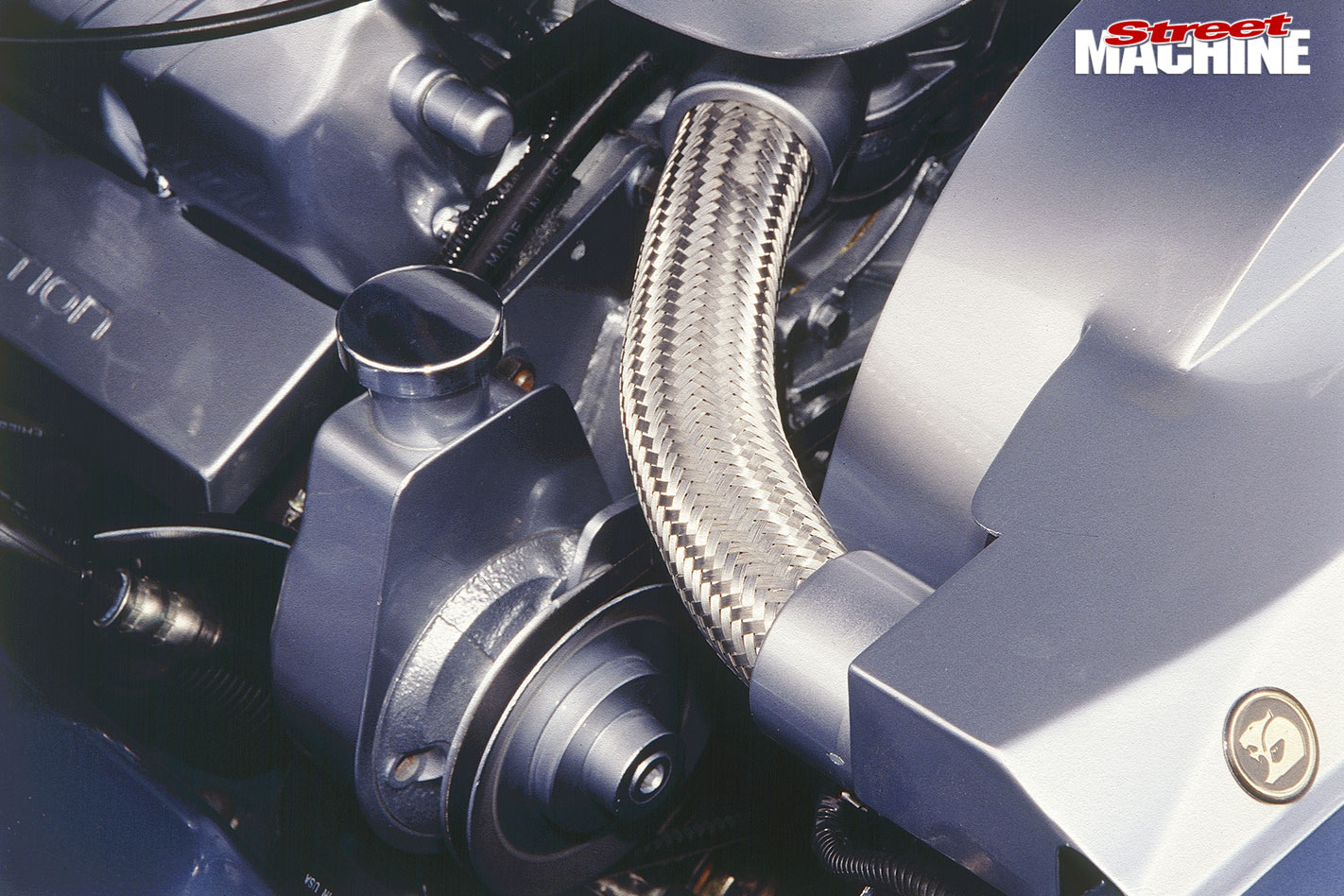 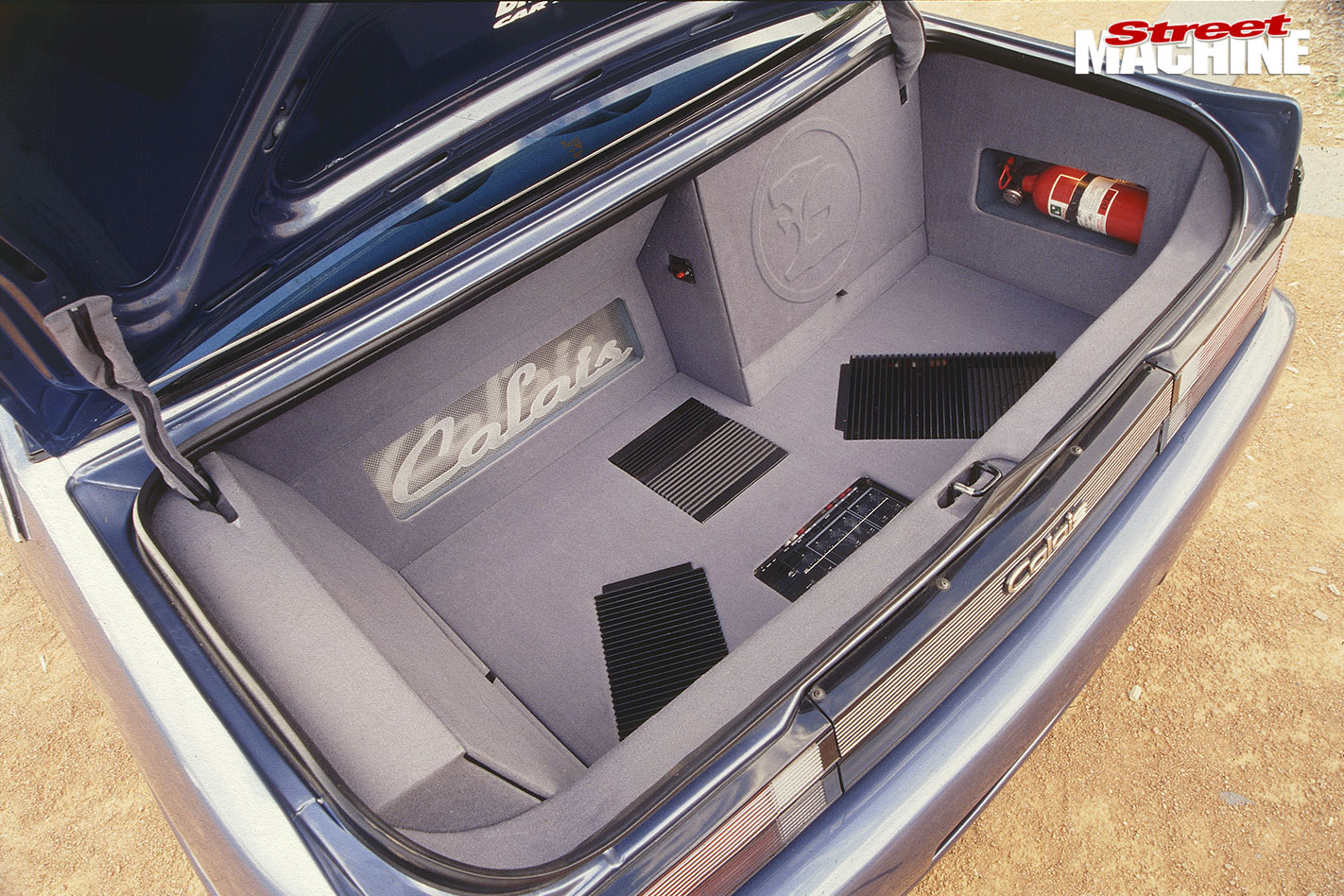 Inside, Steve’s customised handiwork is big on classy HSV-inspired style and low on tackiness. The seats are standard Calais front and rear, and heavily rebolstered for anatomical correctness and now resembling the shape of more exotic Italian brand-name buckets.

You wouldn’t recognise those wild Holden lion-embossed door trims, either, which are stitched in blue velour to match the factory dash. 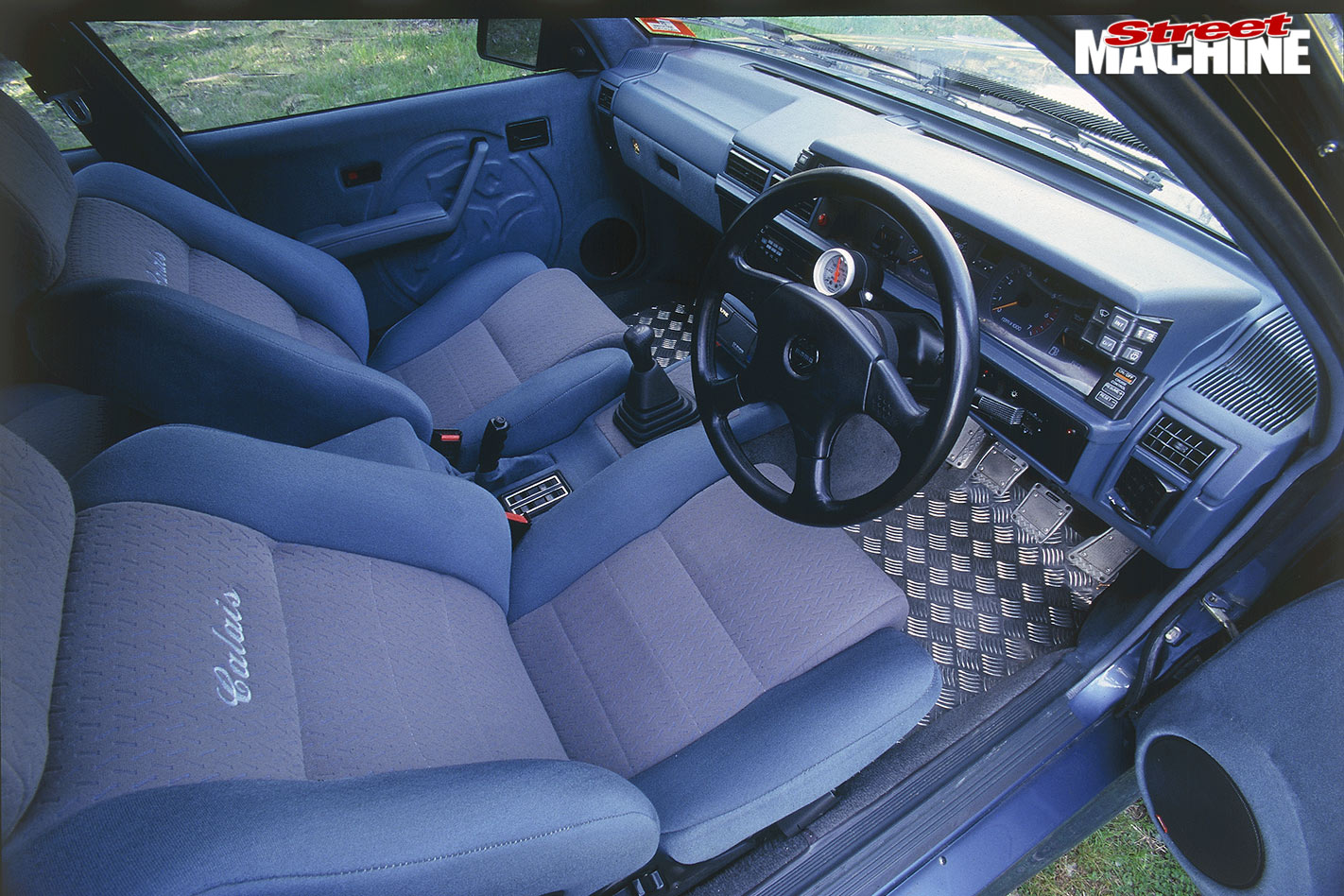 Aluminium chequer-plate mats and a Momo tiller are a couple of the neat finishing touches.

The audio installation in the boot displays the same subtle approach as the interior. Velour-covered MDF panels hide the spare wheel and fuel system hardware, with a trio of countersunk floor-mounted amps (two ADS and a single Alpine) powering Boston Acoustics speakers. Both head unit and CD stacker are dash-mounted. 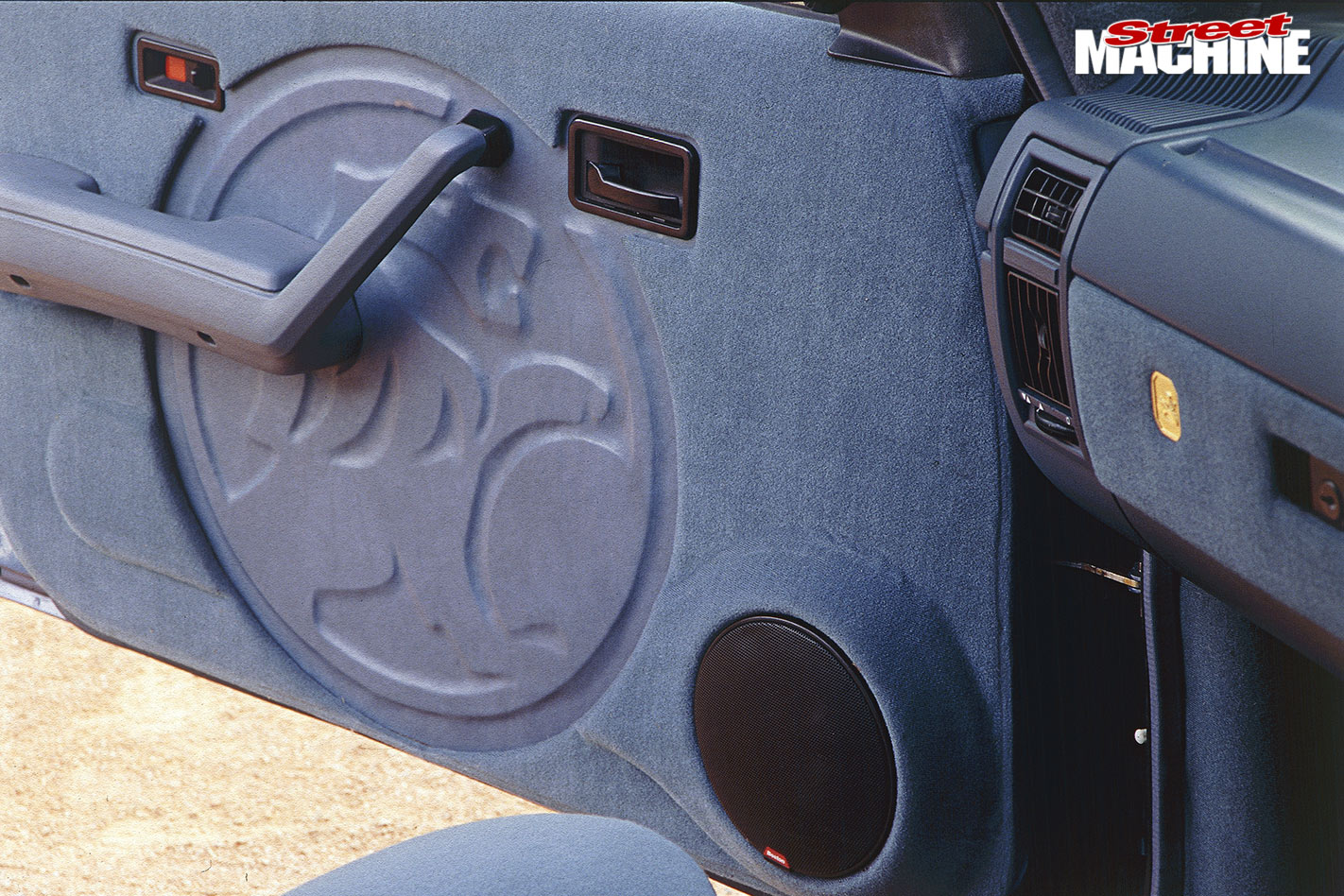 The lion-theme door trims are incredible pieces of work. With each door, Steve laminated 6mm Craftwood to the VL’s original door cards, then used his carpentry skills to rout the GMH design into the Craftwood. Speaker build-outs were formed and the handle, lock and speaker holes were cut in suitable locations. Blue velour was then carefully glued over the top. Cool!

This really is a superbly built Calais, loaded with that all-important car-crafting element that’s often lacking in modified versions of later-generation Holdens and Fords.

Successive invitations into the Summernats Elite Top 80 are testament to the seriousness of car and owner. It’s also one great example to aspiring Commodore builders of what can be done when skilled DIY hands meet later-model Aussie muscle. 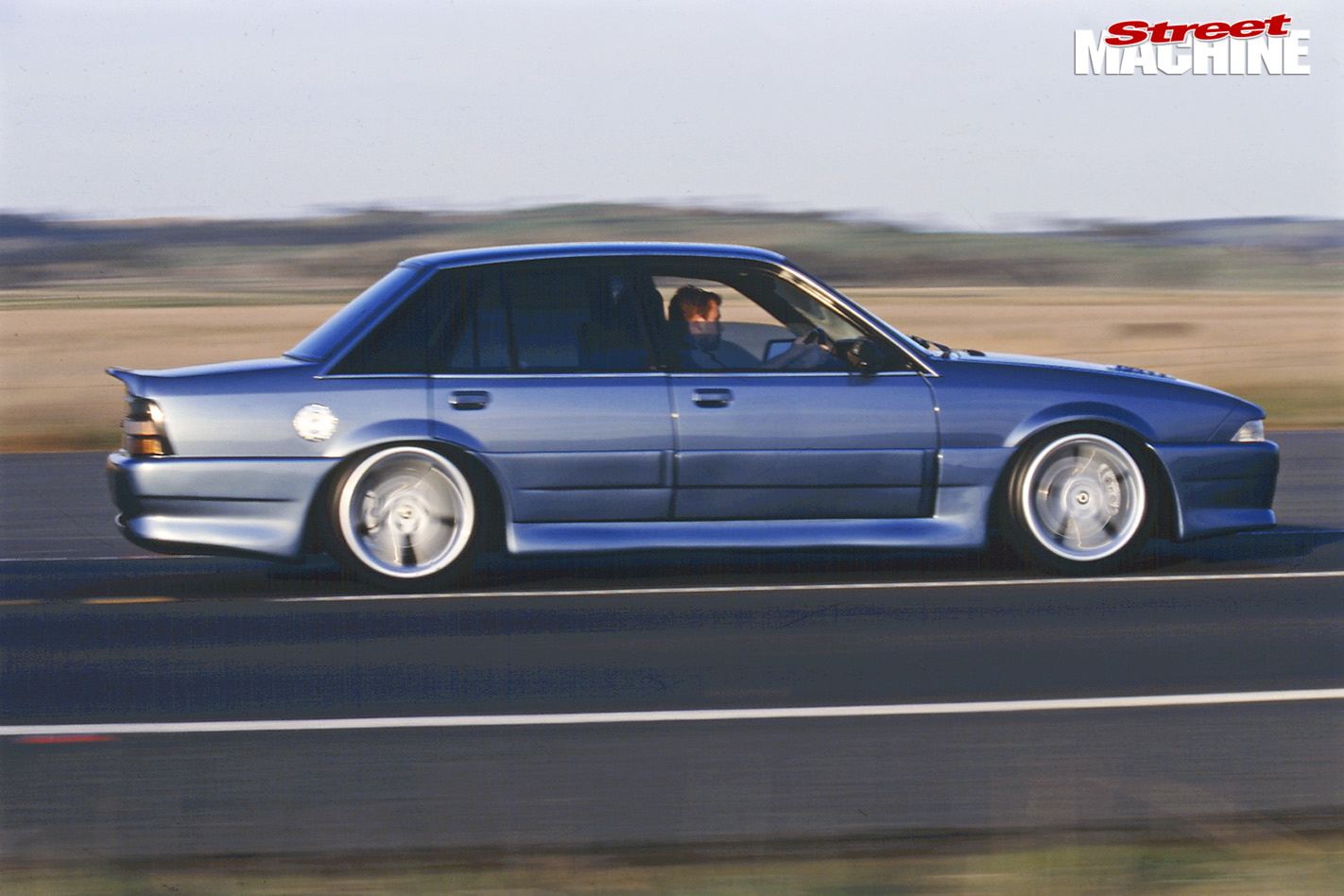