When Mick Curren's grunting, muscle-bound HQ Monaro cut loose with its stretched and blown 308, everyone took notice; especially the cops

THIS super-muscled blown HQ coupe could be the Arnold Schwarzenegger of the street. Check it out: this mean sonofabitch makes little kids cry and old ladies tremble. It’s taken seven years and 25 grand to transform a $3800 hack, bought via the classifieds, into a supercharged streeter called – wait for it – Blow Job. 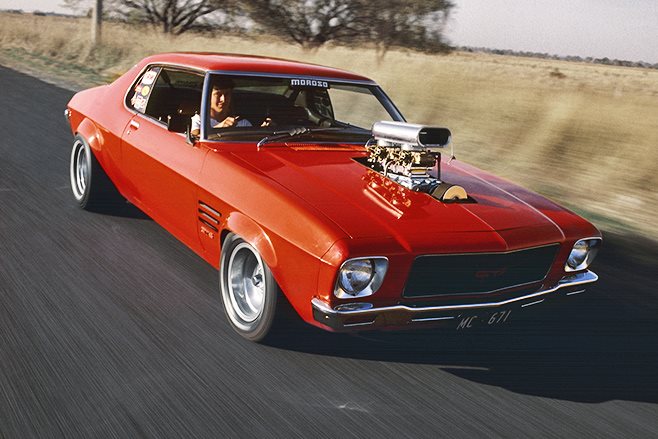 On the dyno it pumps out 525hp and 523ft-lb at the treads. On the road, says owner Mick Curren of Melbourne, the pillarbox-red HQ coupe is spot on – except for the attention it attracts from the cops. Mick’s been pecked to death by canaries. At the last count, he’d scored 27 unroadworthy stickers. For what? “Usually vision obscured, too loud, too low, rubber too fat.” It’s an understatement to say the fuzz are taking the fun out of Mick Curren’s driving. These days he spends more time at the local gym.

Read more: Where are they now? Mick Curren interview 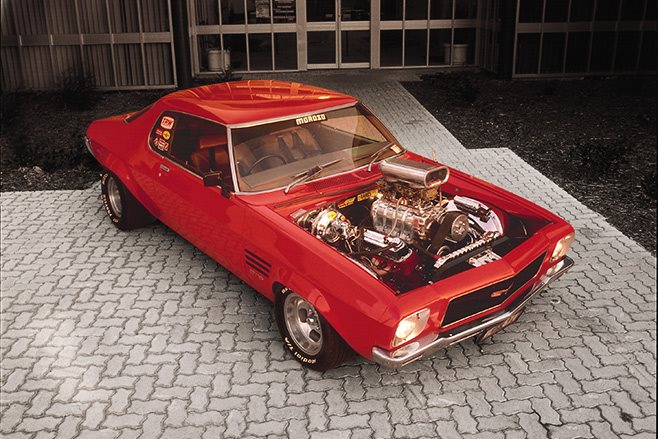 The Victorian police even went so far as to impound Blow Job for three months while they did a whole bunch of engine X-rays to check its history. In the end the force-fed Munro was rated squeaky clean and the cops – a little red in the face – handed the car back to its owner. Mick reckons the police are a mite tough on street machiners generally: “Our cars are as safe as any, probably safer, because we take a lot of care. And they’re certainly a heap safer than most of the hot rods around.” Mick began his hot-up routine with the Monaro as slowly as any bloke of 18 on a teenager’s wage. He lowered it first, then replaced the original Holden orange with a striking red respray. Flares followed and then he had to whip up some wider wheels and tyres to fill the space under the guards. And then Mick got serious … the everchanging car has been off the road for six months every year getting regular upgrades. And since 1983, when the huffer went on, Blow Job has hardly ventured out of the workshop. Those canaries hurt.

What’ll it do over the quarter? Mick’s not sure, though he figures 11s would be easy. “It pulled a 12.8 at Heathcote three years ago before it was blown or tunnel-rammed…” 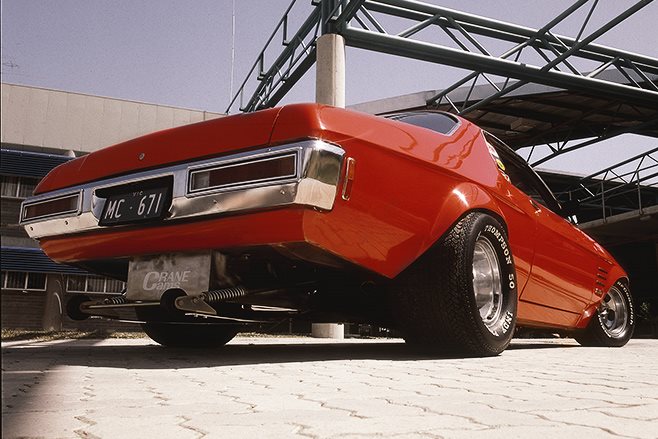 Low-slung stance, fat tyres and blower hat made it tough for Mick's Munro to pass unnoticed. And then there was the exhaust note...

Certainly Mick’s bolted together a goer with impressive technical specs. And, yeah, except for the machining he did all the mechanical stuff himself. He started with an L34 308 and added goodies like L34 rods, solid steel crank, forged Chevy TWR 8:1 pistons and Manley pushrods. It’s a loaded bent eight that doesn’t want for much. A high-volume 440 Chrysler oil pump keeps the life-giving slippery stuff in all the right places. There’s also a Pro-Street super-pan pump with inbuilt windage tray and crank scraper. Up top in the Super Flow heads are Crane roller rockers, Isky double valve springs and polished stainless valves. Tall design Pro-Street valve covers clear double-bar stud girdle posi-locks and roller rockers. Like Brocky, Mick has a double-row timing chain. 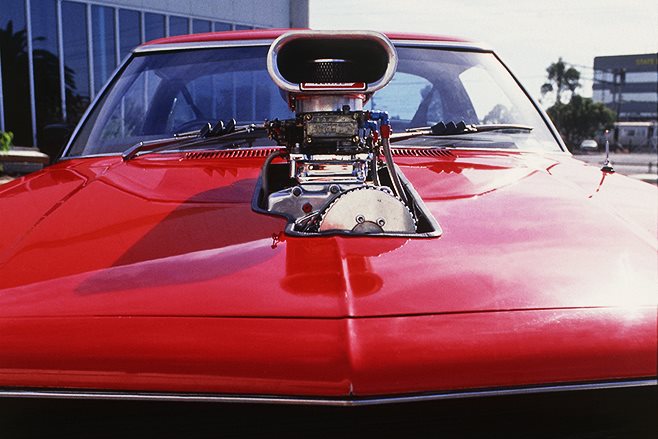 Intake manifold is an Edelbrock Torquer fitted with twin pop-off valves made by Bob Fisher, the bloke also responsible for the supercharger. Twin 600 Holleys with vacuum secondaries handle the fuel. A modified Mallory dizzy gets the whole show jumpin’ and the headers are by Pacemaker. Earl’s braided lines manage the engine plumbing. And showcasing the lot is a stainless-steel mirrored firewall. So far a Muncie Rockcrusher transmission has handled all the grunt without protest. Gear-swapping is the responsibility of a Mr Gasket vertical gate scissor shift, with lockout reverse. For a while, the Munro had the bad habit of splitting harmonic balancers. Mick went the whole hog and had a solid pressed-steel disc made up. And with widened offset keyways set at 90 degrees into the crank, the new gear stays exactly where it should. 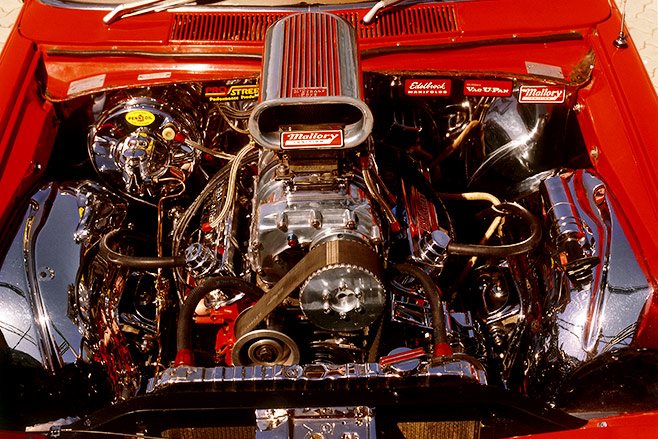 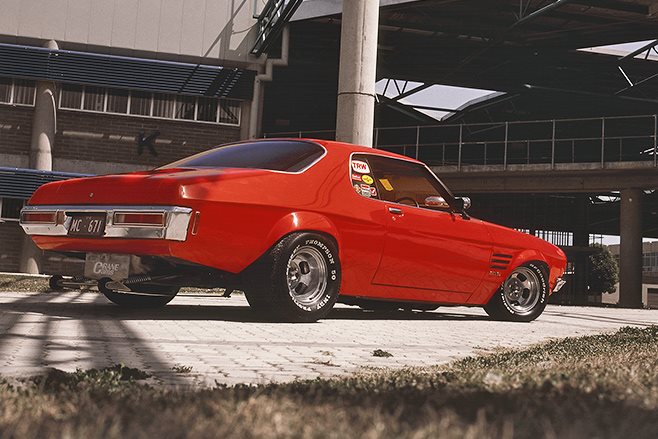 The immaculate boot area houses twin fuel pumps and the battery. Having a monster like this Munro in the garden could strain Mick’s relations with the people close to him. But he’s doing okay so far. His best gal, Annie, won’t go near his car because it frightens the bejesus out of her. But being a reasonable type she doesn’t object outright to it. The Munro’s been in Mick’s life longer than she has, though maybe it’s on borrowed time. Mick’s got the seven-year itch after having the best Blow Job around. 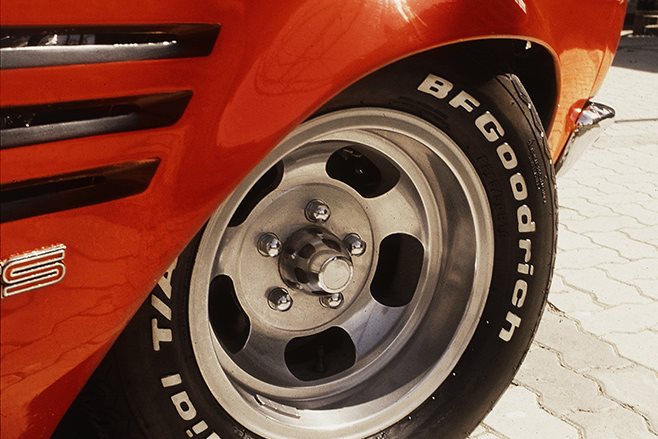