With punchy orange paint and a small metal mountain rising from the sheetmetal, Joe’s VP Commodore mixes old-school street muscle with a twist of hi-tech

With plates like these, you need something very serious to live up to the promise. Joe's VP Commodore does more than that

WITH PUNCHY orange paint and a small metal mountain rising from the sheetmetal, Joe’s VP Commodore mixes old-school street muscle with a twist of hi-tech, and pretty successfully. After all, in this world of me-too Monaros and copy-cat Commodores, how often do you see one that looks like this? 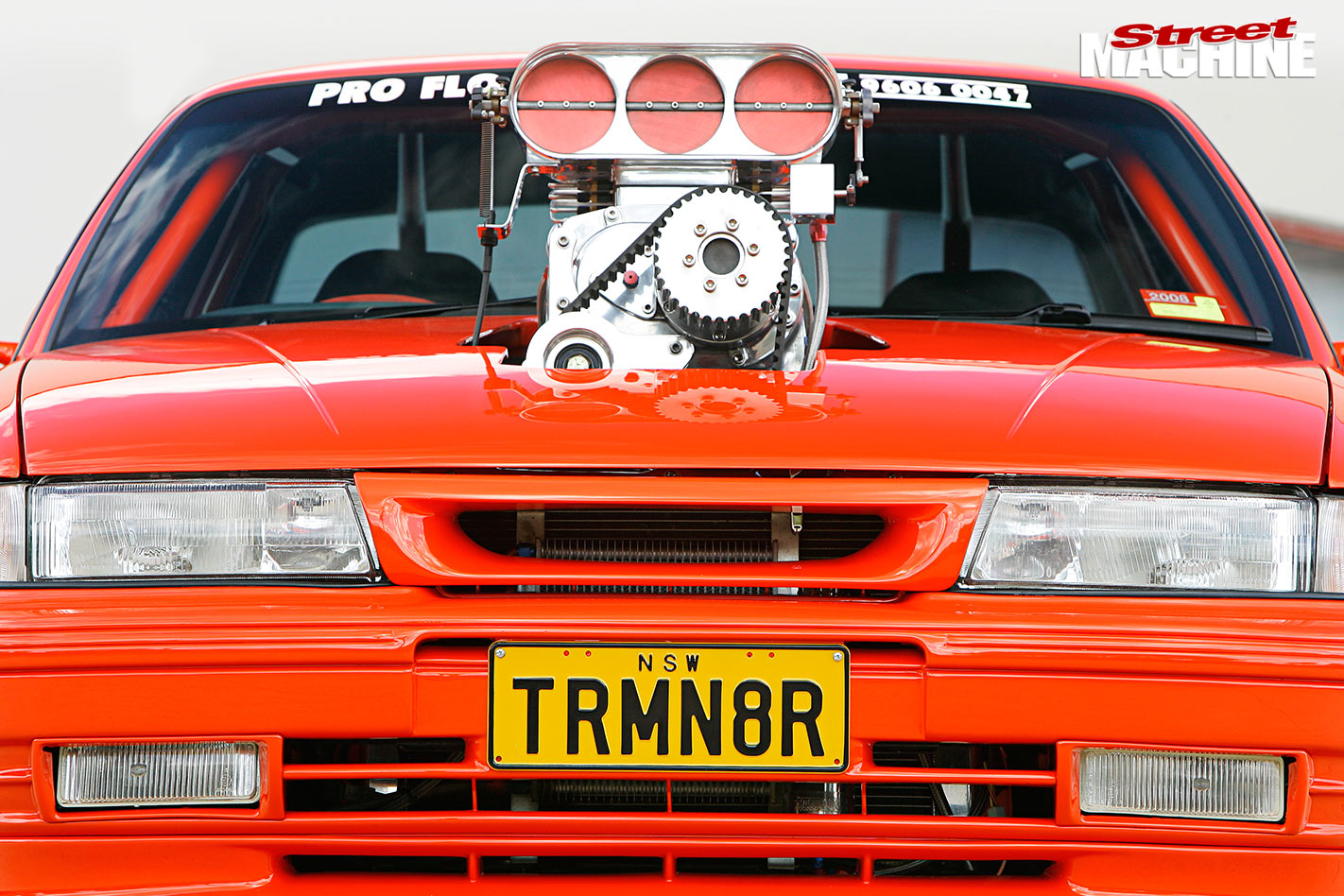 “I don’t know where to start!” says Joe when I ask about the car’s build history. But he soon gets into the swing of things. After all, he has plenty of memories and mayhem to share, having owned the car since the early 1990s.

“I bought it when they first came out,” he explains. “This one was a V6 when I bought it – an ex-demo model; an almost new car.” 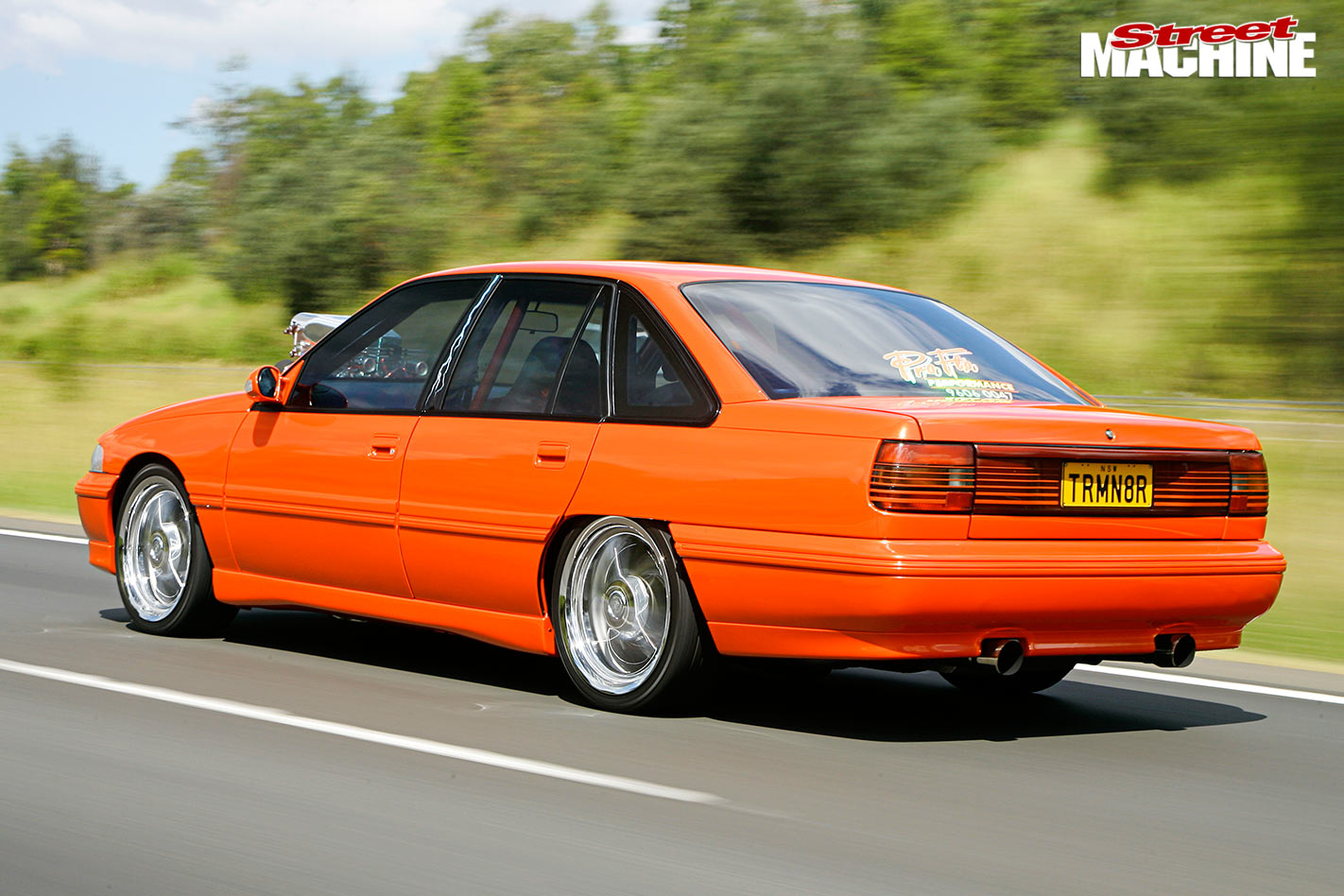 The car was a daily driver for several years before Joe began modifying. “I supercharged the V6,” Joe recalls with a laugh, obviously winding himself up for what he was about to say. “I abused that … then I did a stroker V8 with eight throttlebody trumpets.”

Yep, a V8 engine transplant is not difficult in pre-VT Commodores, and naturally aspirated with 5.7 litres, Joe says his car was capable of a 12.2 over the Eastern Creek 400m sprint. Paul Sant at Proflo Performance in Sydney performed much of the work. 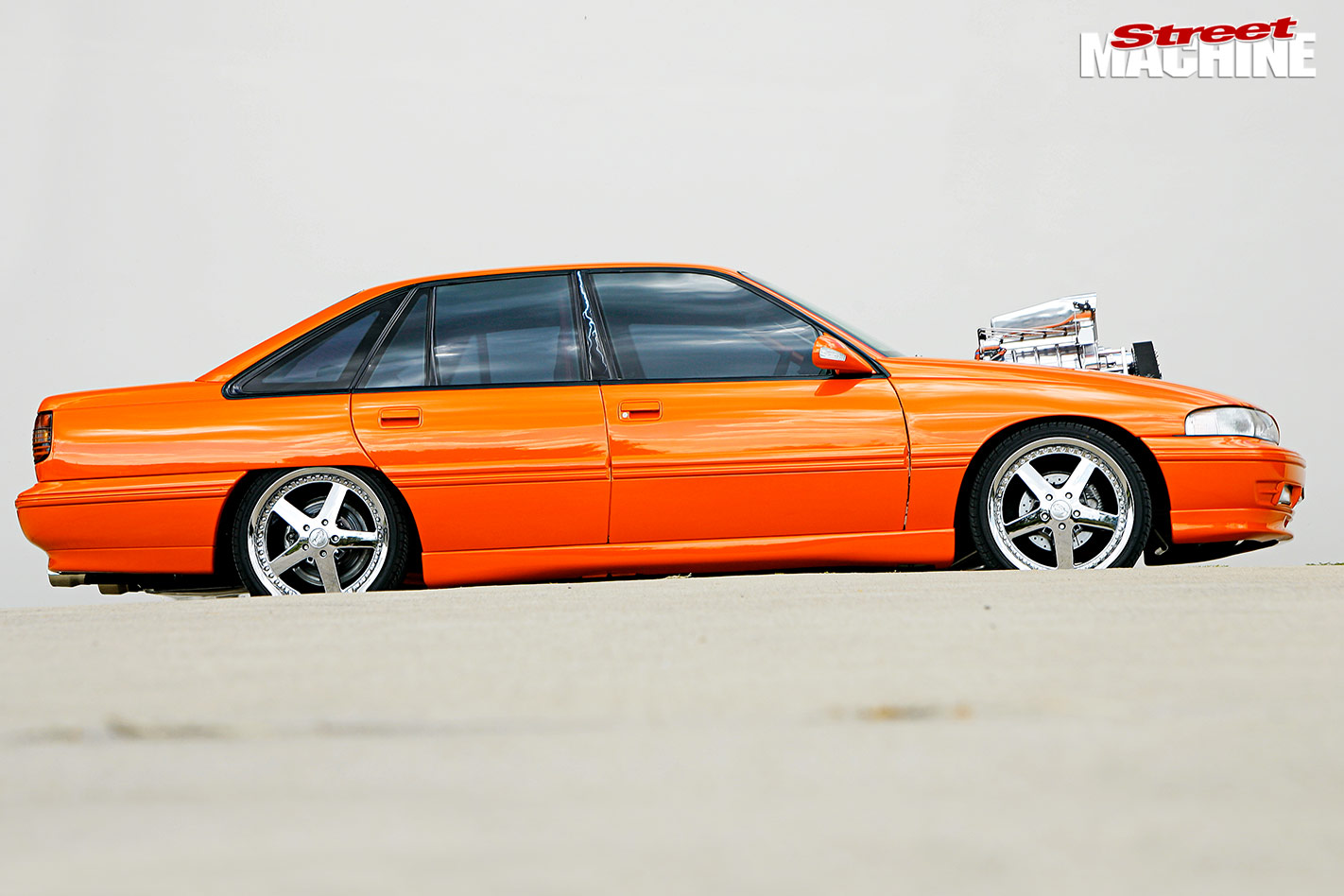 The VP’s running standard-sized four-wheel discs for now but probably the easiest upgrade is brakes from the VN Group A and VP GTS: twin-piston PBR calipers grabbing larger, 330mm rotors. The VT’s twin-piston caliper is an easy installation and if he wishes, Joe can source hardware from HSV and Harrop, too. His challenge is finding a pair of ‘front runner’-sized narrow wheels that will fit over a set of big front brakes

”I’ve know him since he opened for business,” says Joe happily. “The heads I had on the stroker were the first set of VN heads he did: ‘Proflo 001’. So I’ve known him a long time!”

But it was a ride in a mate’s supercharged Chev that convinced Joe he should consider a bit more rumpy-pumpy for his Commodore’s engine bay. 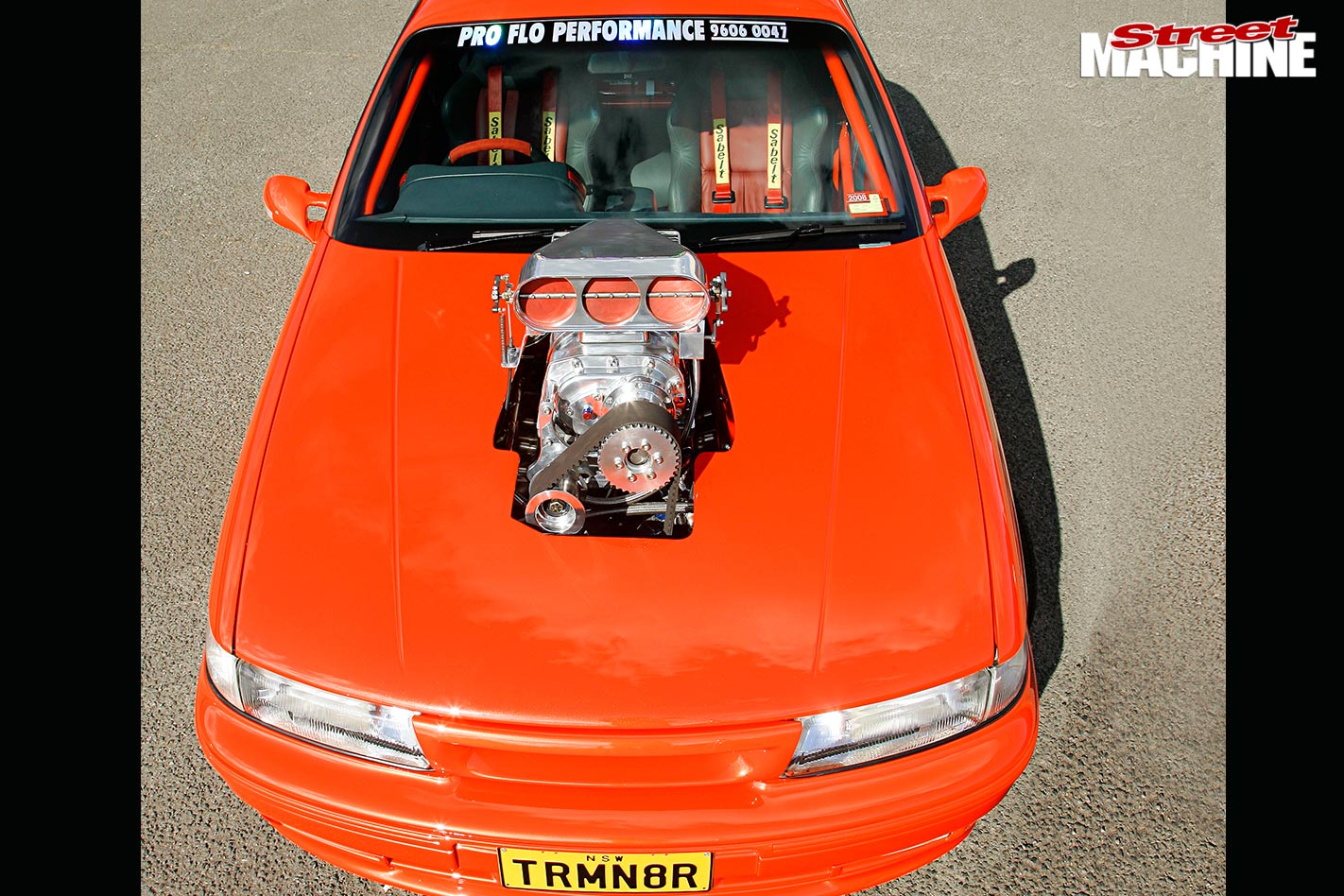 “I was hooked!” Joe says of his joy ride. “I thought, ‘I gotta get me one of them’. Actually, I was considering a turbo conversion but I went to a few shows and it seemed like they were a factory option. They had become quite popular but I wanted something different. You just can’t beat the rush of a blower!”

Joe wasn’t in any hurry to install his ‘dream’ engine but a blown head gasket was the perfect excuse to build the engine the car has now.

Proflo’s Paul Sant takes up the story: “The block’s been four-bolted and it has a Crankshaft Rebuilders steel 355 crank in it,” he explains. “Lunati rods, SRP blower pistons, solid roller cam and heavily ported VN heads. What else do you need to know?! 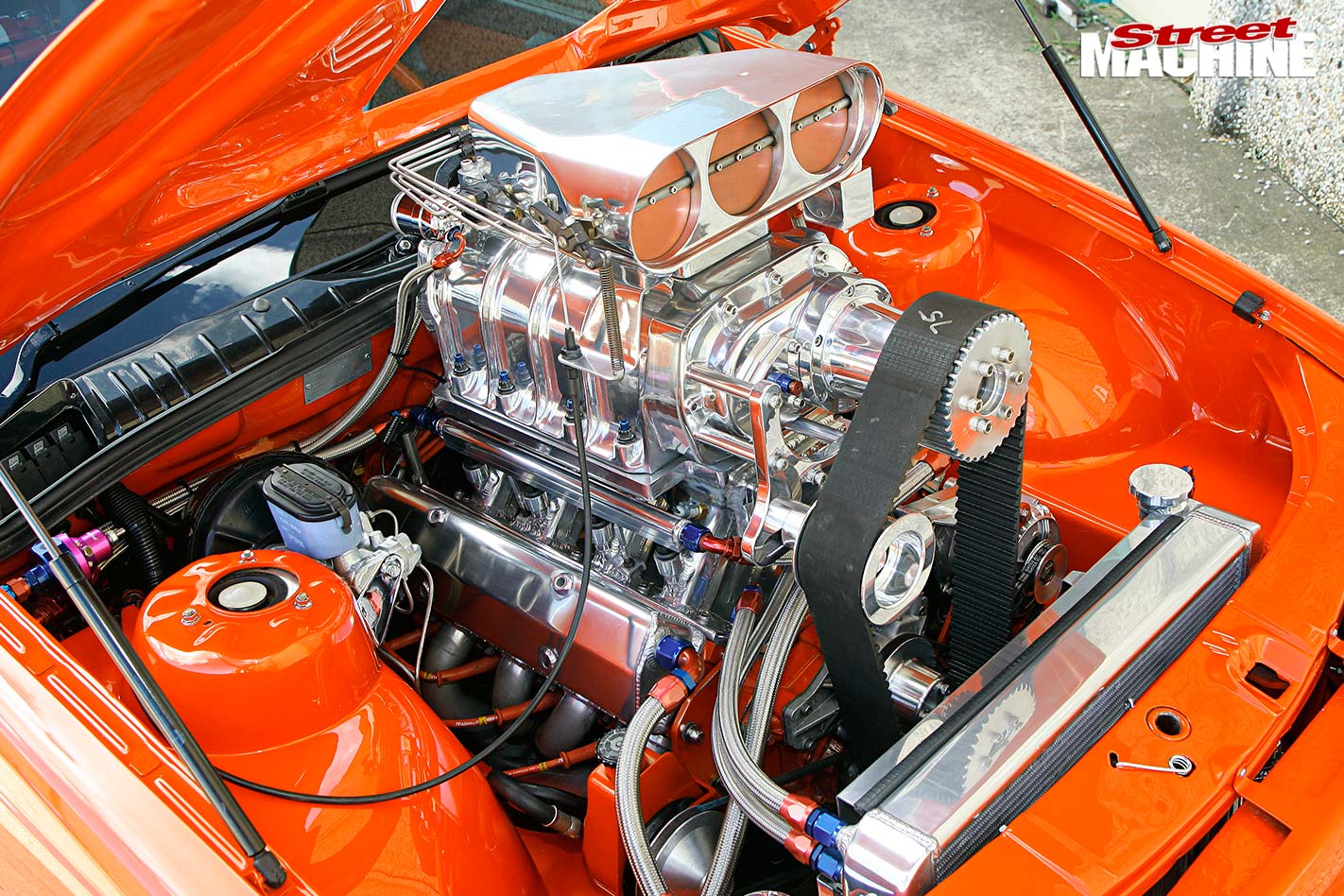 “Ferrea valves, PSI valve springs, titanium retainers, Yella Terra roller rockers and that’s about it internally,” he says. “There’s a JP oil pump on it and the sump is a High Energy.”

It’s easy to see from that list of components that Paul and Joe didn’t want to half-bake the new engine.

It’s not obvious, but although the blower engine looks old school, it runs electronic fuel injection. “We plopped on a sheetmetal intake with that 6/71 blower and added one of my EFI plates inside the hat with the TPS (throttle position sensor) inside the barrel valve,” explains Paul of his hidden system. “On seven pounds it makes about 500hp at the tyres. That’s on pump fuel – and Joe drives it everywhere.” 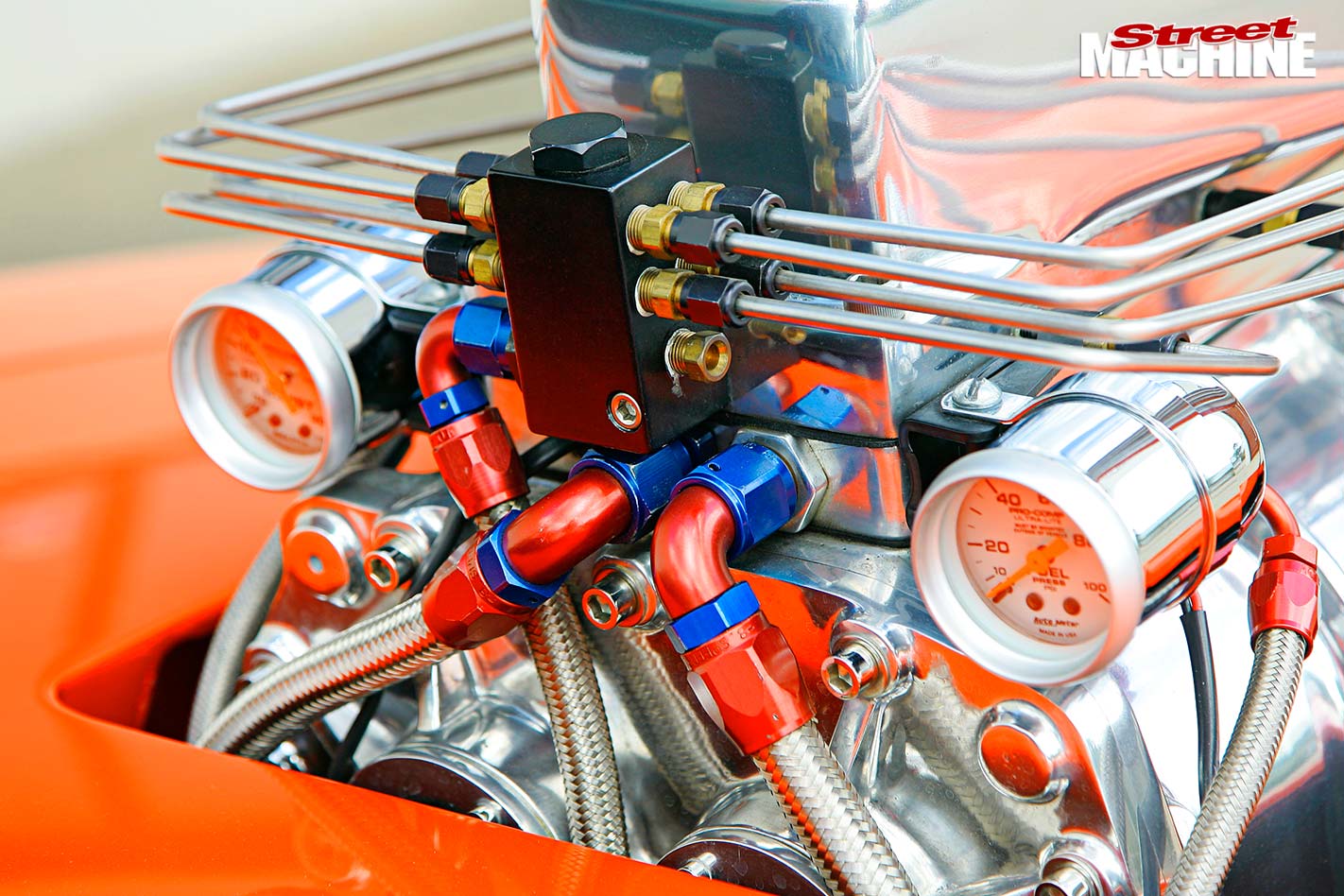 The ECU is an EMS and Paul is a great fan of electronic control for street use. “It’s a lot more tunable with EFI,” he reckons. Two Bosch fuel pumps drawing from a boot-mounted alloy tank keep the fuel flowing and a dual three-inch exhaust vents the bad stuff.

Behind the engine is a GM TH350 three-speed auto – converted to manual – with a 3500rpm Dominello converter. The axle is a nine-inch with 31-spline axles and 3.7 gears around a full spool.

Joe was looking for a power upgrade at first, but as so often happens when one part of a car is being improved, everything else came into focus. “Originally, we were simply going to install a blower engine – no detail work or anything else,” says Joe. “But then when the engine came out we thought: ‘Oh, all right, let’s freshen up the paint’. It wasn’t long before we decided to change the colour altogether.” 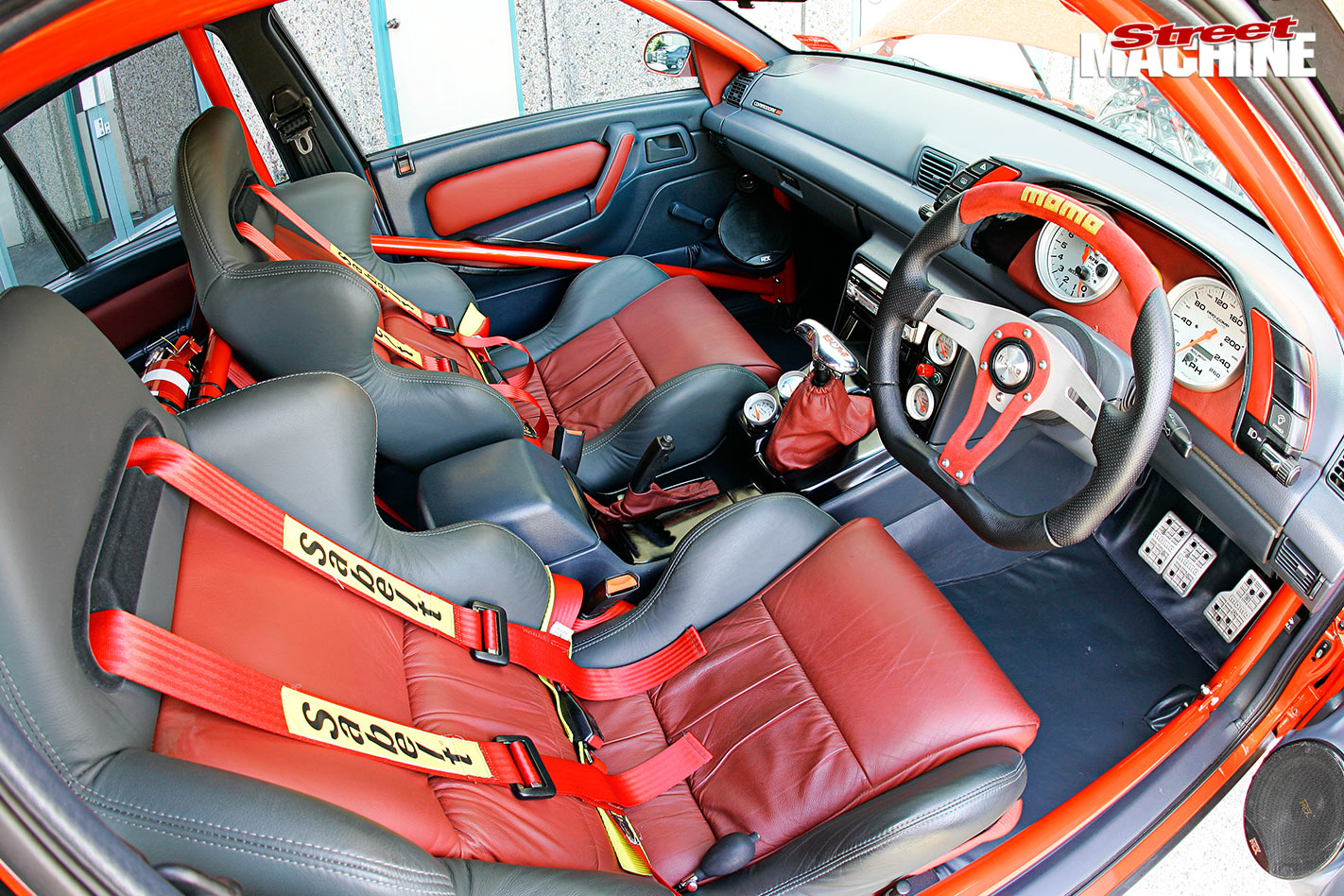 Inside, the front seats are the only tradesman-built components; Joe installed the rest

The paint and body is the work of Carl Simmons from Pro Image. It’s the wrapping around a roll cage welded into the shell by Craig Burns at Street Car Fabrications. Craig was also responsible for some other metalwork in the car such as the fuel tank and extractors. The paint doesn’t have a name as such, being a special brew that looks red in some light, orange in others, and with a hint of gold in it, too.

There are a few nice touches on the exterior such as the filled fuel filler and the BMW M-Series style door mirrors.

“I had them sent over from Japan,” Joe says. “They were a bit difficult to fit. They had universal mounts on them that made them look like Dumbo’s ears. So I used 20mm plastic and had to hand-file everything to make them fit, before they were painted by Carl.” 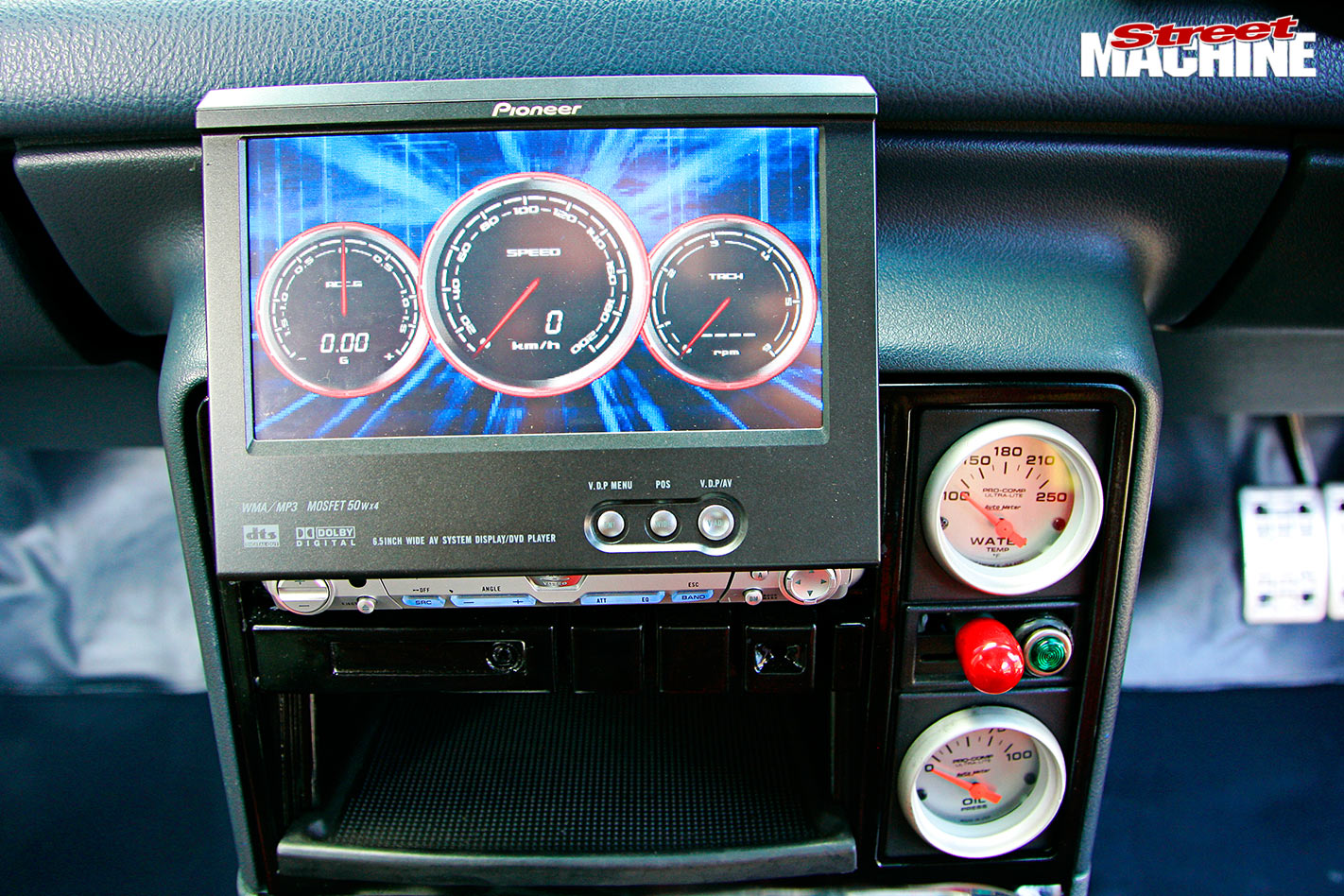 Real Commodore freaks will recognise the exhaust outlets and door handles aren’t quite ‘factory’ VP either. Joe did most of the interior himself. “I got mum’s old sewing machine out and stitched vinyl over the original carpet,” he explains with another laugh. “It has a few ripples but I was quoted thousands for someone else to do it.”

The door trim modifications required for roll cage clearance was also a DIY-by-Joe effort, as was the headlining, modified instrument cluster and speaker pods.

“They began as mock-ups in a Kellogg’s cardboard box,” revealed Joe. “I added plenty of bog and some vinyl!” With front seats being the only components done by a tradesman, you can’t stop yourself from being impressed by Joe’s enthusiasm – wrinkles or not!

Wheels are 19x8in Work Equips. “I didn’t want to modify the suspension too much,” he explains, referring to the larger wheels’ need for relocated spring seats and other tweaks. Wholesale Suspension did much of the work, with the most recent suspension changes being raising of the nose and lowering of the rear for a neutral stance. 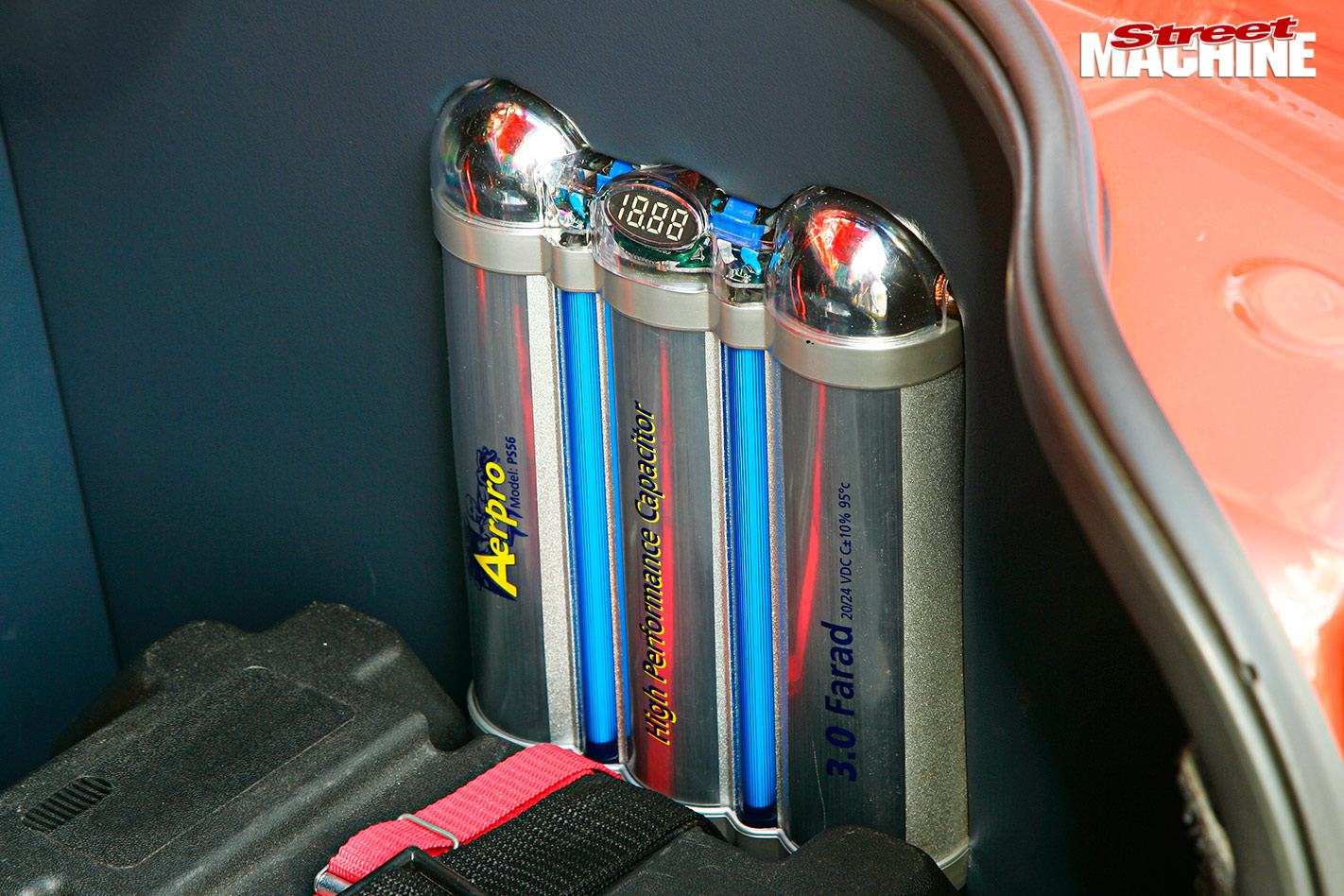 “I haven’t run it down the quarter yet,” admits Joe. “It’s first real outing [since the blower went on] was the Powercruise. That was its maiden cruise and the attention it got was unbelievable. I didn’t get to drive it as much as I would have liked because we had problems with the distributor, but I got a few laps in!

“I was impressed by it. Right now it has a soft tune in it. It starts and runs just fine, and it doesn’t get hot. It’s usable – and for a blown car, I can’t complain!

“I can remember the conversation with Paul: ‘We should have all this work done in six months’,” says Joe. “But it took four years! Originally it was just going to be the engine, but as you can see plenty of extra detail went into it.

“It was always intended to look tough, and go as hard as it looks.”

INSIDE
Trim: A bit of this and that
Trimmed by: Owner
Gauges: Auto Meter
Wheel: Momo