BELIEVE YOUR eyes! Greg Carlson’s $70,000+ Pro-Streeter VK Calais is everything it looks – and more. That’s what the Summernats entrants thought when they gave it Entrants’ Choice. And it’s what the judges and entrants thought when they gave it Top Engineered, Top Street Competition and Best Blower Award. Everyone was knocked out. Greg’s good friend Rob Beauchamp may have taken out Top Street Machine Overall, but Greg’s Blown Silly Calais was the winningest car at the Summernats by a long way. It was hard to get a decent look at this silver marvel at the Summernats because it was always surrounded by people – paying customers, other entrants and judges. The judges just kept coming back and piling on more points. It was hard to take in all that incredible engineering in one bite, no matter how hard you looked. 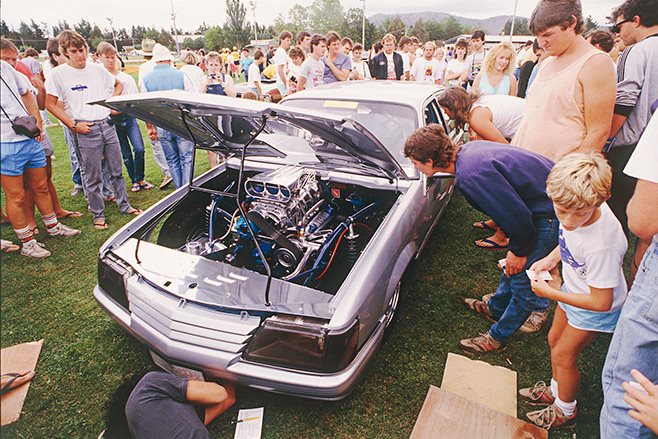 You’d think Greg would be used to all the attention by now. His original Blown Silly Holden ute had almost the same effect at the 7th Street Machine Nationals, where he also grabbed Best Engineered and Top Blower Award. But he still gets a big kick. After all, when you put every minute of spare time over six months into a rolling masterpiece it’s a buzz when people appreciate the car. 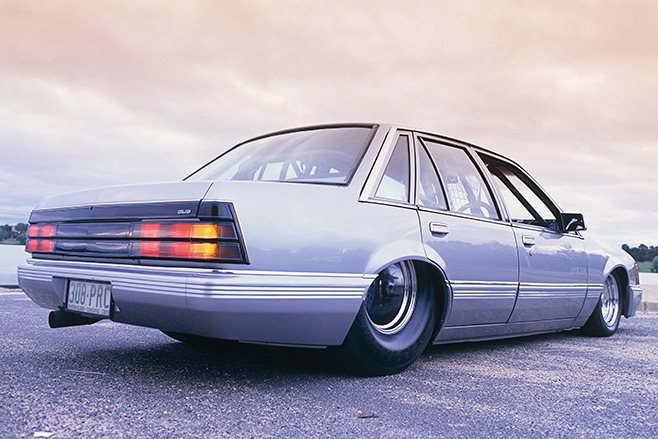 In 1988, Greg Carlson’s Calais was class and clout in equal amounts

“I couldn’t tell you how many hours I’ve put into it,” Greg says proudly. “I’ve spent every weekend on it, mainly doing the aluminium work with my mate John Chivas. Bill Jones put in two or three hours every day.”

Jones is the man behind Weldwell Engineering, the Brisbane-based tough car business that built most of both of Greg’s Blown Silly Holdens. And he’s the bloke behind the knockout engineering in Robbie Beauchamp’s car, Mick Atholwood’s mind-numbing Corvette Funny Car, Bill Smith’s incredible FJ Funny Car and some of the top Rails in the country.

“I reckon Bill’s one of the greatest engineers in Australia,” Greg says. “The guy’s a genius. And I’m lucky because we get on really well.”

“I bought eight of them from a wreckers for $45 each and had to kit them and put new brake pads and pistons in. It’s worked out costing me $1100 just for the brakes on that car. Bill’s used similar set-ups on racecars and says the Suzuki calipers are one of the best production calipers around. I’m going to race this car and if it’s going to run 8s – which I think it will when I finish with it – I want it to pull up.”

Finish with it! You read right. Greg has even more plans for a car that would already have most of us in seventh heaven. But more about that in a minute. That floating axle deserves a few more words. 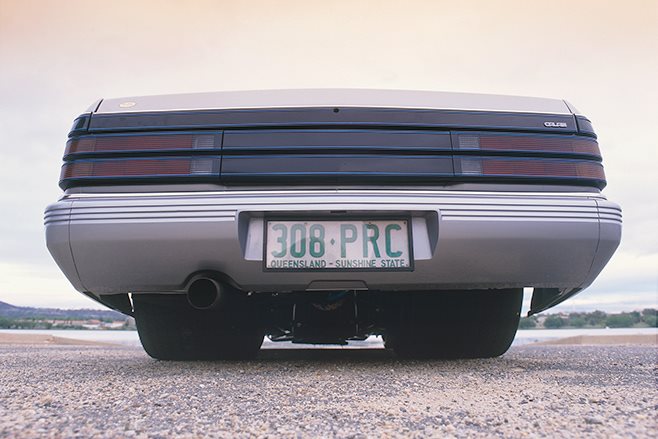 It uses a Ford nine-incher running 4.75 gears and Pro-Street-short 35-spline axles to Weldwell-made 15x16 wheels and 33-inch-high, 21½-inch-wide Mickey Thompsons. They’re 14x6-inch Weldwell wheels up front shod with 205 Yokohama 008s. “The whole thing’s removable,” Greg says. “And a good thing too, because to change a wheel the whole diff has to come out.” 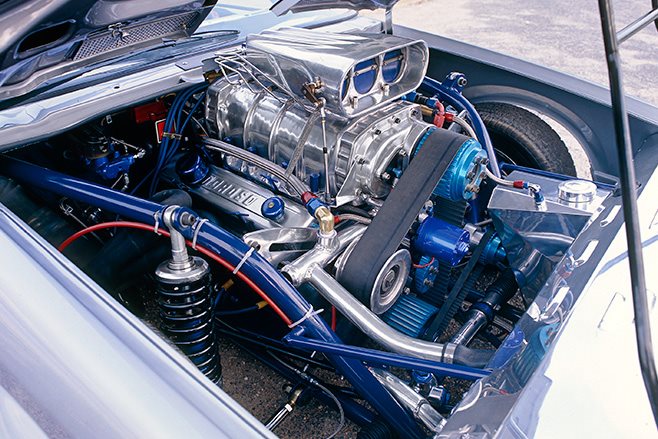 The award-winning blown small-block Chev under Blown Silly’s ground-scraping nose is the work of Mick Atholwood (the Corvette Funny Car man) – it’s the same beautiful powerhouse that’s graced Greg’s previous ute. It runs a steel crank, TRW blower pistons, Pro Street rings, Blower rods, and a whole stack of engine gear – roller cam, pushrods, rocker arms and valve springs. Heads are Fuellies, intake manifold is Weiand, the GM 6/71 blower and custom fuel injection were set up by Mick and Bill Jones (that Jones man again) is responsible for the blower drive. Headers are custom built, ignition is via a Mallory magneto and the wiring – what little you can see of it – was masterfully done by Brisbane’s Alderley Auto Electrics. The 600-odd horses melt bitumen via a Turbo 400 tricked by Jim Rose, working through a shifter with Lightning rods. 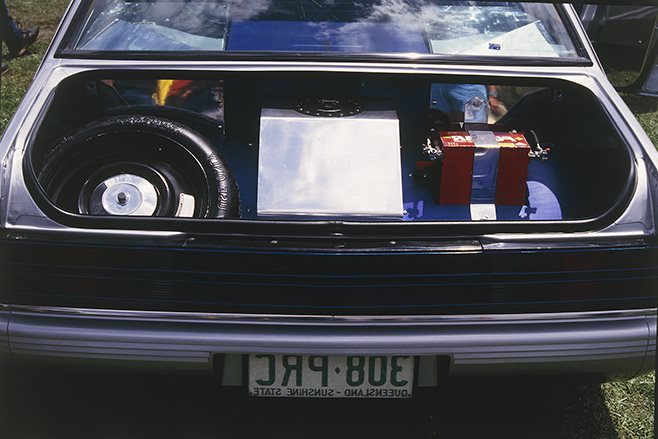 That smooth VK body was hardly beautiful when Greg bought it as seven grand’s worth of wreck. “It’d gone off the road at around 140 kays and the front wasn’t too flash,” is Greg’s understatement of the year. “The motor had just about come through the bonnet. I had to replace the bonnet and the floor had to come out, anyway.” Greg, whose Pro Paints business is well known to Brisbane’s tough car owners, lovingly restored the body to better-than-new. His Satin Mist paint job is so good even our photos can’t do it full justice.

The dark blue velour trim is the work of Goodline Trimming. The mirror-like aluminium work is by Weldwell, with plenty of help from Greg and John Chivas. Instruments are all Auto Meter – fuel, oil pressures, blower pressure, tacho and temp. What radio? Listen to a stereo when you’re running 8s? 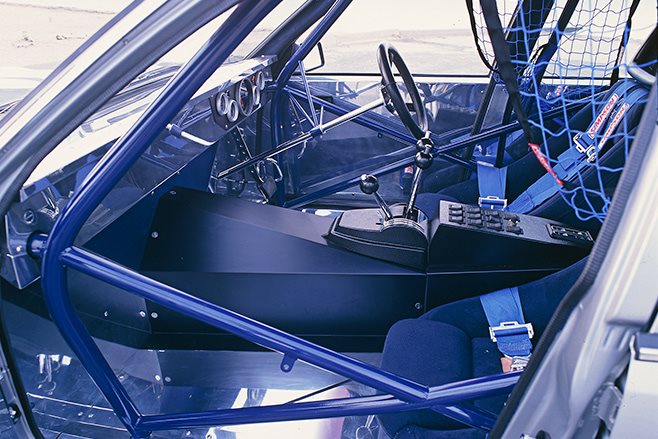 And what about those mods Greg has in mind? “Another mate of mine works for Ron Richards, the Brisbane guy who does engineering work on Dick Johnson’s cars. He’s making me a set of aluminium heads. And I’m going to buy the best fuel injection system I can find when I go to the States in June for the Car Craft Nationals.” (The Stateside trip was one of the prizes Greg picked up at the Summernats. Not bad, eh?)

Greg nearly didn’t make it to the Summernats to clean up all those prizes with Blown Silly. He explains the dramas best: “We were running a day late getting it finished and Bill Jones had already left for Canberra. But his sons, Wayne and Darren, who’re top engineers themselves, helped me finish it off. Wayne worked two days without sleep, then jumped in his car to follow me down the New England Highway to make sure everything was okay. But we had two flat tyres on the trailer at 2am, miles from anywhere. We got the thing back to a garage but nothing was open as it was New Year’s Eve. So we had to change the tyres by hand by the side of the road then take a bit of air out of each of the Commodore’s tyres to pump up the trailer tyres. It took us around two hours and was a pretty big drama.” 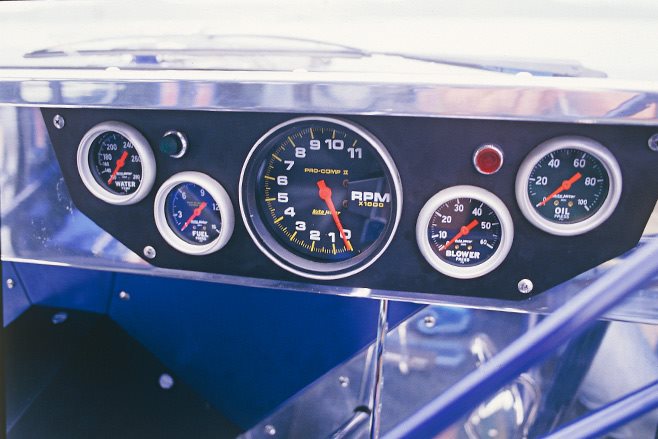 With the sump only an inch off the ground and the sills not much more, Blown Silly scraped its belly on the driveway up to the scrutineering pavilion. And the rest is pretty much history.

And what did Greg think of mate Robbie Beauchamp knocking off Top Street Machine Overall at the Summernats? “I’m glad Robbie took out Top Street Machine,” he says. “He’s a good mate and the car obviously deserved it. I got what I wanted. I don’t class my car as a street machine, anyway – it’s a Pro-Streeter and I’d rather have a trophy with ‘Pro-Street’ written on it than ‘Street Machine’. Top Engineered was what I wanted and that’s what I got. The other awards were a bonus. That’s the third time I’ve won Top Engineered at a national event, so I’m pleased.” 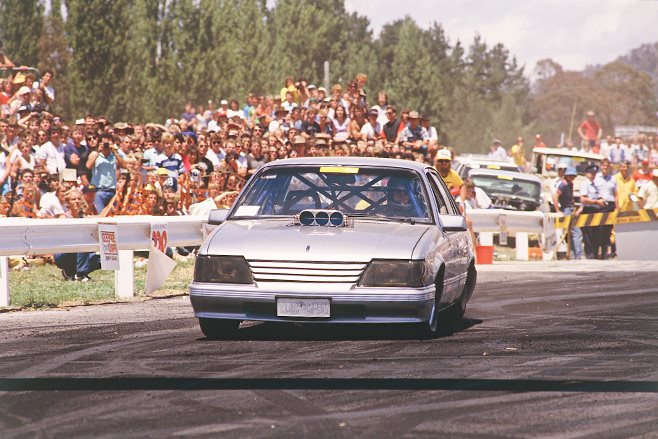 Greg’s also pretty pleased about the prospect of opening his new Brisbane speed shop. It should be up and running by the time you read this. “We deal in a lot of second-hand stuff to try to keep prices down for the guys who are really serious about tough cars,” he says. “And Bill Jones will custom-build a lot of stuff, which is good news.”

With the credentials of Greg Carlson and Bill Jones up front, you’d have to reckon you’ll hear a lot more about Brizzy’s newest hot car shop. A whole lot more…