AN LX Torana hatch of any calibre is always going to be a stop-and-stare spectacle in 2020, but Corey Vanderlei’s bright orange example is particularly noteworthy: tubbed, packing 427 cubes of blown LS fury, and with a stance to make any grown man weak at the knees.

Keen-eyed readers will probably recognise this striking hatch from a few moons ago, as we featured it in the September 2017 issue of SM. Back then it was owned by serial car-builders Dave and Jodie Guilfoyle, who gave it the same paint and interior it’s wearing now and stuffed it with 590hp worth of small-block Chev. Fast-forward a few years and the Torana found its way into Corey’s hands, but this is by no means his first fast Holden.

The LX has been coated in Papaya Orange, an original Torana colour that is broken up perfectly by the black accents. The colour combo was chosen by previous owners Dave and Jodie Guilfoyle, and was a big drawcard for Corey. The stance was another important part of the look that he wanted to get right, so he enlisted Dave to renovate the suspension and get the Torana sitting perfectly

Corey has owned a bunch of killer cars over the years, including a 1300hp ProCharged HQ Monaro. Dave was keen on acquiring said Monaro, so the two mates organised a deal that saw Dave end up with the Quey and Corey with the LX. “I wasn’t ever looking at selling the Monaro, and my wife was actually a bit upset when I did because it was used in our wedding and stuff,” says Corey. “But Dave was super keen on the Monaro, and LX hatches are super rare, so we worked out a deal.”

Corey had a stab at racing the Torana at the World Advertising No Excuses #2 heads-up drag racing at Ballarat Airport in March this year, but struggled to get it to hook up on the un-prepped surface. “It was after that event that I got Dave to redo the rear end, and the car hooks up straight away now,” he says

While the gorgeous Papaya Orange paint and interior remain largely the same as when the car left Dave’s hands, the same can’t be said for the driveline. ‘Only’ 590hp wasn’t going to cut it for Corey, so it wasn’t long before the SBC combo was pulled and sold off and a 427ci LS was slotted in. “I had bought the engine off Tim Holmyard a few years before I got the Torana, so we decided to stick that in when it was still aspirated and it went from there,” says Corey. In aspo form, the engine stomped out a properly impressive 720hp at the flywheel, but it wasn’t long before Corey was on the hunt for more power. 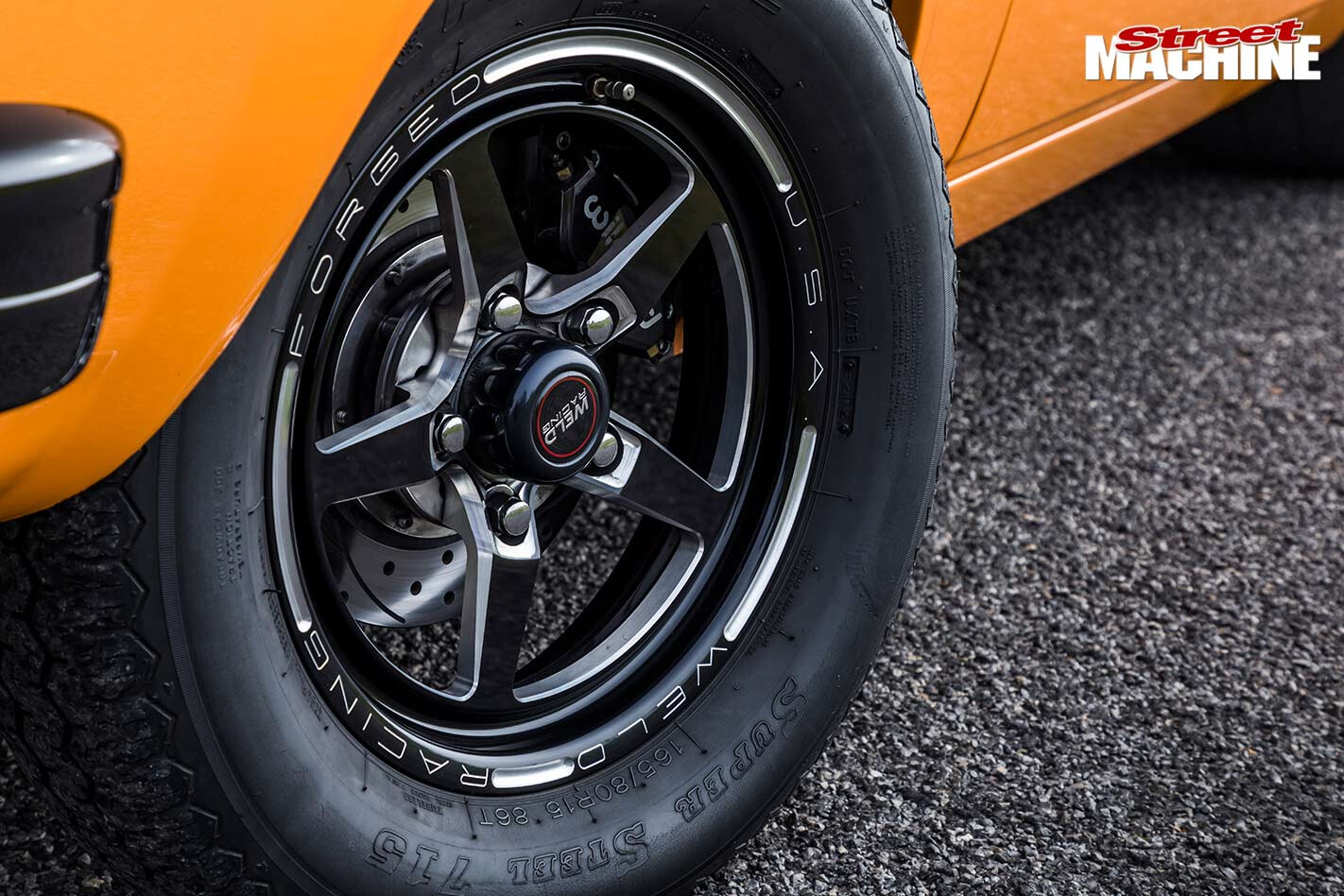 Weld Racing 15x3.5 wheels are used up front over the top of the four-piston, 280mm Wilwood stoppers, while sitting under the rear are 15x10 Welds with 325 Mickey Thompson radials wrapped around them. “The wheels are part of what makes the look for me,” says Corey

Despite selling the car on, Dave has had a hand in guiding Corey through the entire build process. Dave and his wife Jodie run DJ Automotive in Victoria, and Dave’s special move is taking cars – particularly Holdens – of this era and calibre and somehow making them even better. He’s even screwed together a number of SMOTY contenders. “As soon as Corey said he wanted to go LS, I was egging him on to do it, and it has been great to see the car progress as far as it has and to be a part of it,” he says.

While most of the interior is standard, the boot floor has been heavily customised to accommodate the new four-link rear end and 9in diff. Hiding beneath the black carpet, there’s a water cooler for the blower, the relocated battery and the fuel cell, which also has its own stealthy cover

It was Dave who suggested going with the 2.9-litre Whipple blower for extra oomph, as it suited Corey’s needs perfectly. “I wanted the car to still be like an aspirated car,” Corey says. “I mainly build my cars for the street, so I didn’t want the laziness of turbo power – I like snappy, instant grunt.”

As for the rest of the motor, the 427 is built off an alloy LS3 block, with a Callies Magnum crank, Callies rods and Diamond pistons to take compression to a lofty 13:1, along with a custom-grind solid-roller cam. The top end is where things get really beefy, with a killer set of Higgins-fettled All Pro cathedral-port heads, topped off with the 2.9-litre Whipple blower. A set of 1650cc injectors dish out E85 according to the will of the Holley EFI computer. The engine has been in and out a few times during the build process, but as it currently sits, it’s still on a base tune with 12-13psi.

The force-fed, 427ci LS looks right at home squeezed between the Torana’s rails, with nothing else cluttering your view of the gleaming Whipple 2.9L blower. Note that Corey opts to run without any form of air filter, both on the street and on the track

“We’re actually looking at changing the cam soon,” says Corey. “It still has the NA cam in it, so we’ll change that soon and shoot for over 1000hp.” Both Corey and Dave reckon that even in base-tune form the car should be cranking out around 800hp, which is more than enough for basic street duties.

The rest of the driveline consists of a transbrake-equipped Powerglide housing a 3800rpm nine-inch converter from Dominator, which sends the power to the four-linked, nine-inch rear end with 3.7:1 gears.

Corey had a crack at racing the LX at a no-prep event at Ballarat Airport in March this year, and quickly saw the newfound power from the blower simply blow the tyres off – even with monster 325 Mickey Thompson radials fitted. “We didn’t get any decent times, because we just couldn’t get it to hook up,” says Corey. Thusly, Dave was given the job of renovating the rear end, with new arms top and bottom, an Enemies Everywhere anti-roll bar kit and Viking coil-overs. “It hooks up straight off the transbrake on the street now; Dave did a killer job,” says Corey. “Plus it now has the stance I always wanted; it just makes the car for me.”

Inside the Torana, things are largely to factory spec save for the monster tacho, trio of Auto Meter gauges and the B&M ratchet shifter. Corey doesn’t want to ’cage the hatch in order to keep it a true street car, so he won’t have too many chances to get that 8sec timeslip

Corey’s main goals for the car aren’t exactly tame, but they certainly should make for one hell of a street car when he’s done. “I want a 1000hp, low nine- or eight-second car that I can just jump in and drive on the street whenever, which is what I do now anyway,” he says. “I get it out all the time; I’ll drive it to the drags and down the street. There’s no point building them if you don’t use them.”