TIM Strange has been in this game for 15 years, building top-notch, cutting-edge street machines. Impressive since he’s a one-man band who uses only occasional outside help. This Falcon, however, took even longer than you might expect. 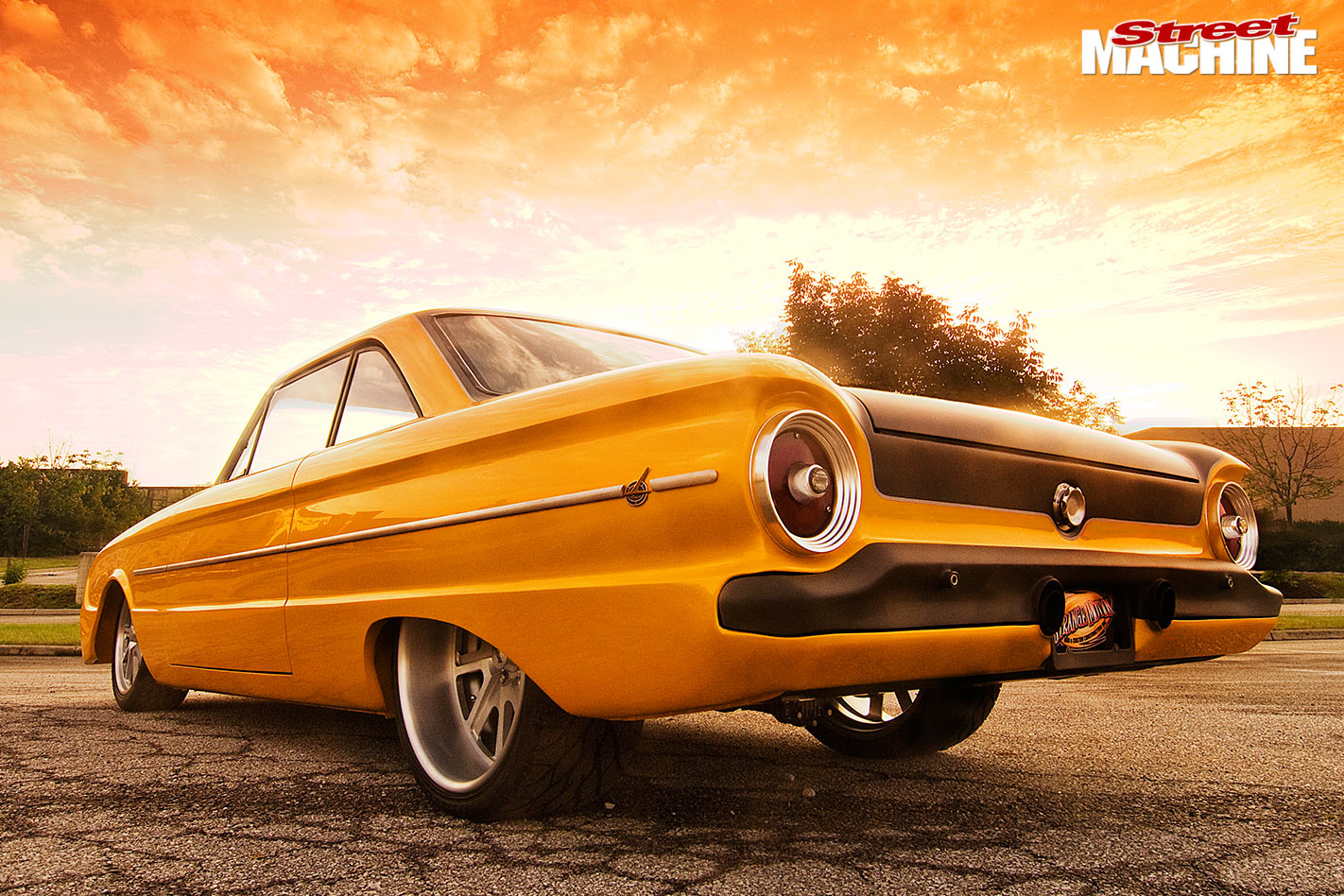 “We were rushed to get it to SEMA in 2006. It was still in primer three days before leaving for Las Vegas and had no brakes or wiring. Then the client’s money dried up. It was two and a half years before a new owner purchased it. During the 2008 Detroit Autorama Ryan Thomas stepped up and we made a deal to finish the Falcon and bring it back to the 2009 show.”

But first it was blown apart for some big changes. “I love modern industrial design, so I took some style cues from that world and did a lot of little things. There are no polished or chromed items; lots of areas are satin-painted. All mount bolts are done using a machined bung with flush satin stainless Allen-head bolts. This finishing idea is used throughout — it took a ton of time to make them.” 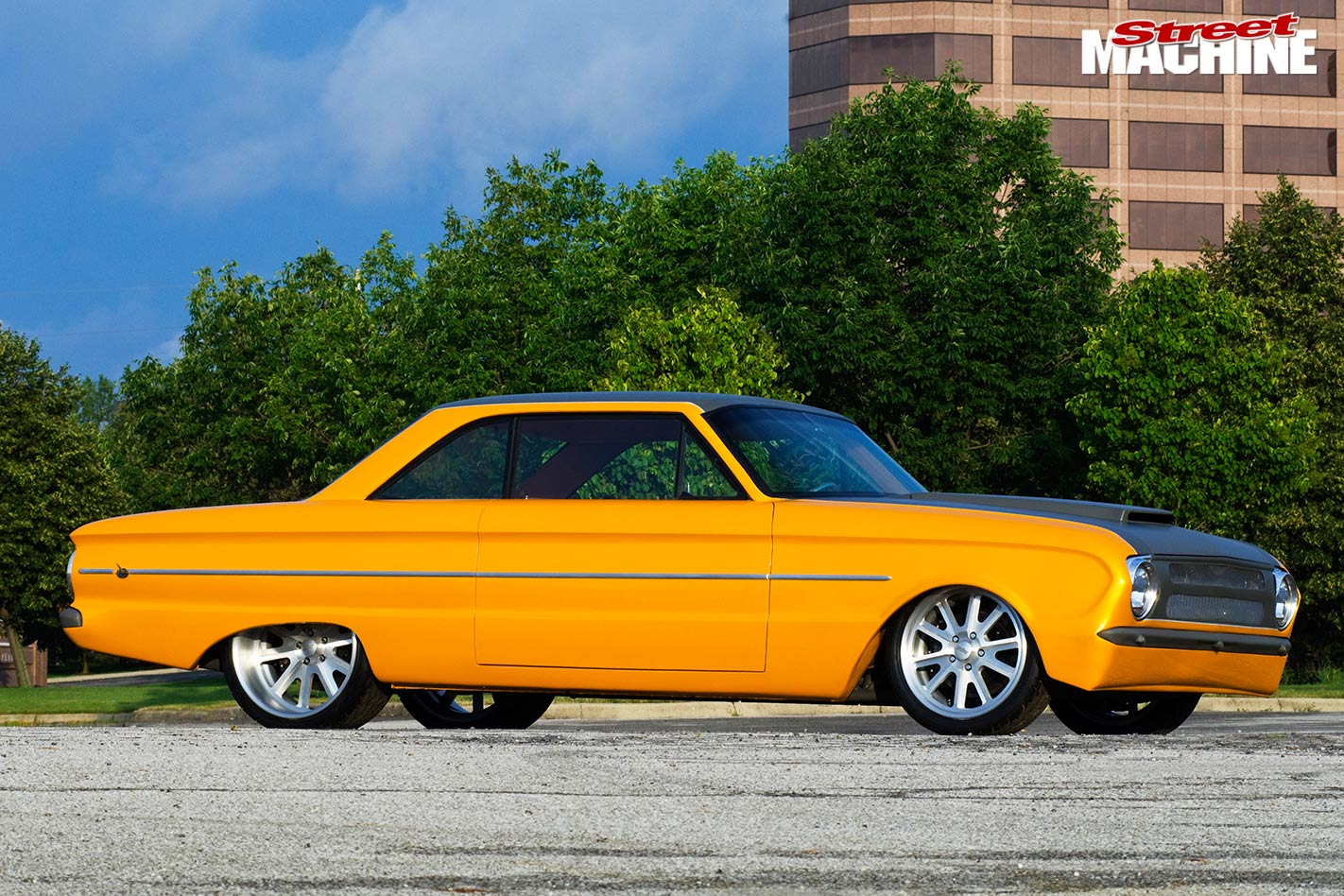 Tim then got out his tape and worked out how he’d reframe the car. “I figured out a new tri-rail round-tube chassis that channelled the body a full six inches, to get it down low. I love building tube-chassis cars, for the cool factor and artistic value. I had to cut out the floor and brace it on the chassis jig before I could start measuring.

“I bent the rails out of 1.75in tube, with one-inch cross-bracing at 45 degrees. I dressed and smoothed all the frame intersections before it was painted.” 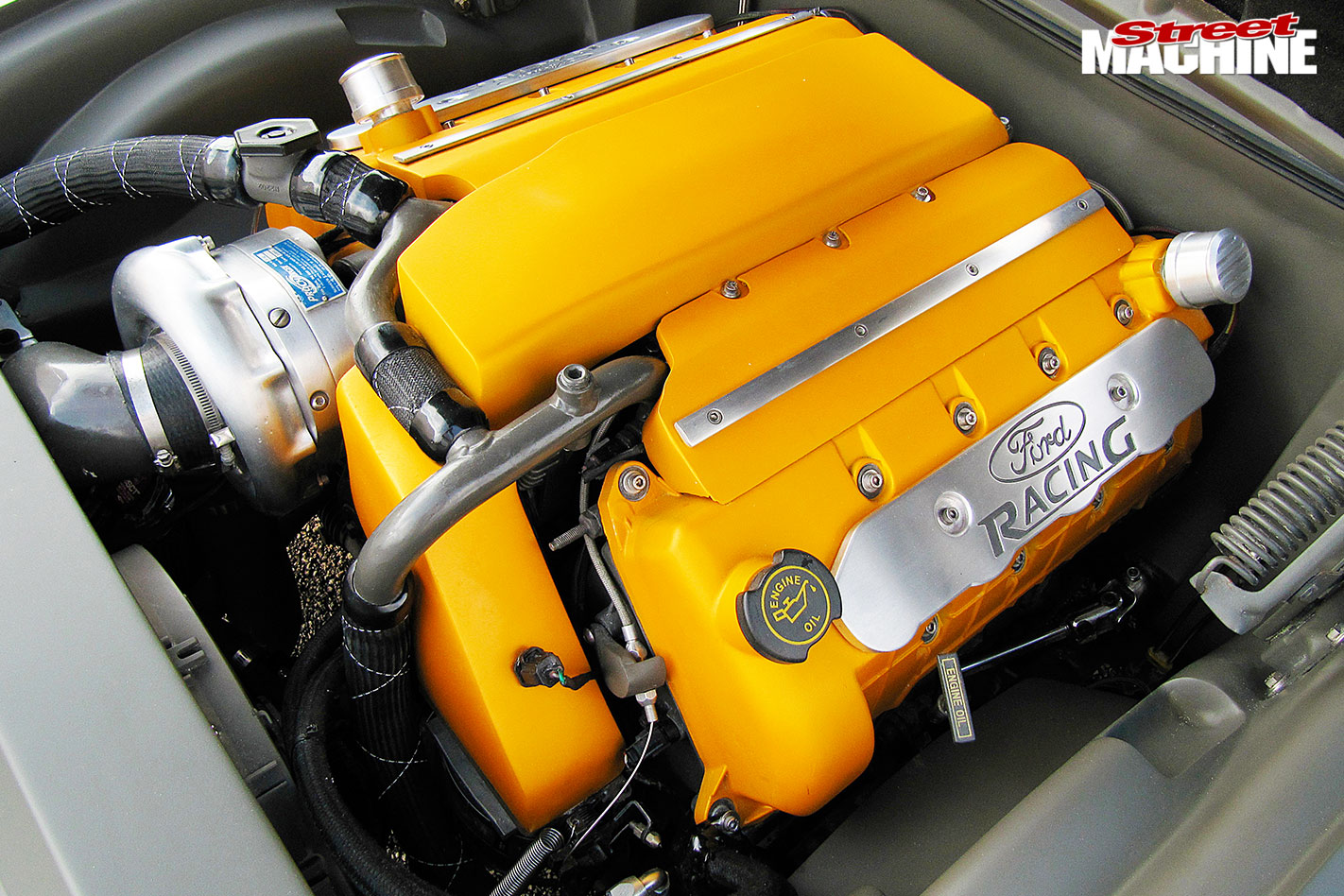 The Procharged and intercooled 4.6-litre Mustang V8 is a big unit, but looks right at home in here. Inner guards and firewall were fabricated from scratch by Tim

He also fabricated the suspension. Up front it’s a custom tubular A-arm design with Bilstein coil-overs and Mustang II dropped spindles, which allowed him to set the geometry and ride height just where he wanted it. The rear suspension uses a Dutchman quick-change aluminium axle located with a simple Heim-jointed four-link and more Bilsteins. And there’s a set of ‘slap you in the head’ brakes — 13-inch Wilwood rotors and six-piston calipers — operated by a Kugle master cylinder and power booster. 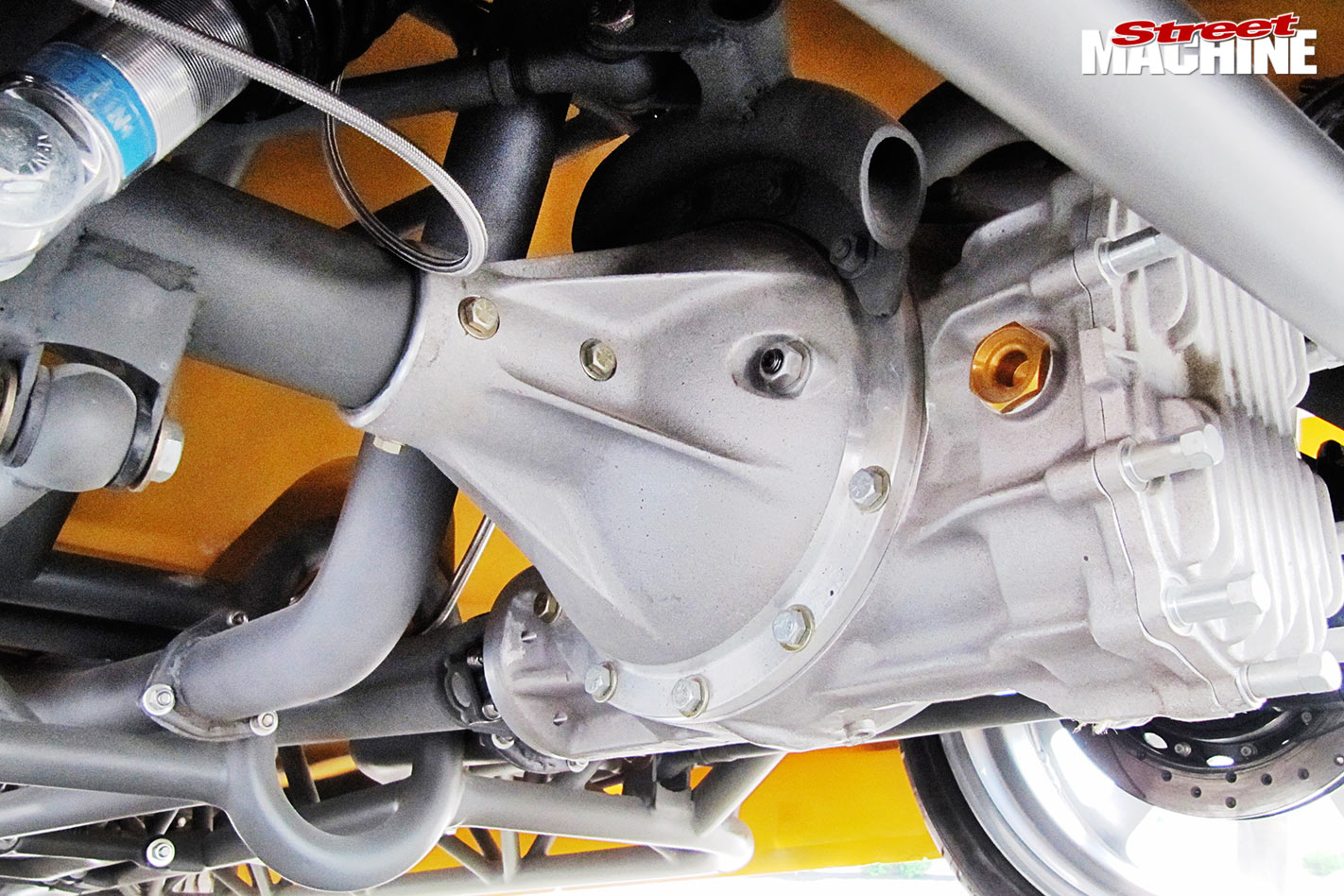 A Dutchman quick change adds a touch of hot rod to the proceedings. Suspension is a triangulated four link. Tim reckons the tubular chassis consumed $50K in labor alone

The new floor was built using a monocoque tub, like a vintage race car, with small rectangular tube internals and smooth sheet-metal top and bottom to create a rigid structure. Tim hid the body mounts in the sides and bottom of the new floor, giving a slick finish to the underside. He also formed a sheet-metal firewall and inner guards. 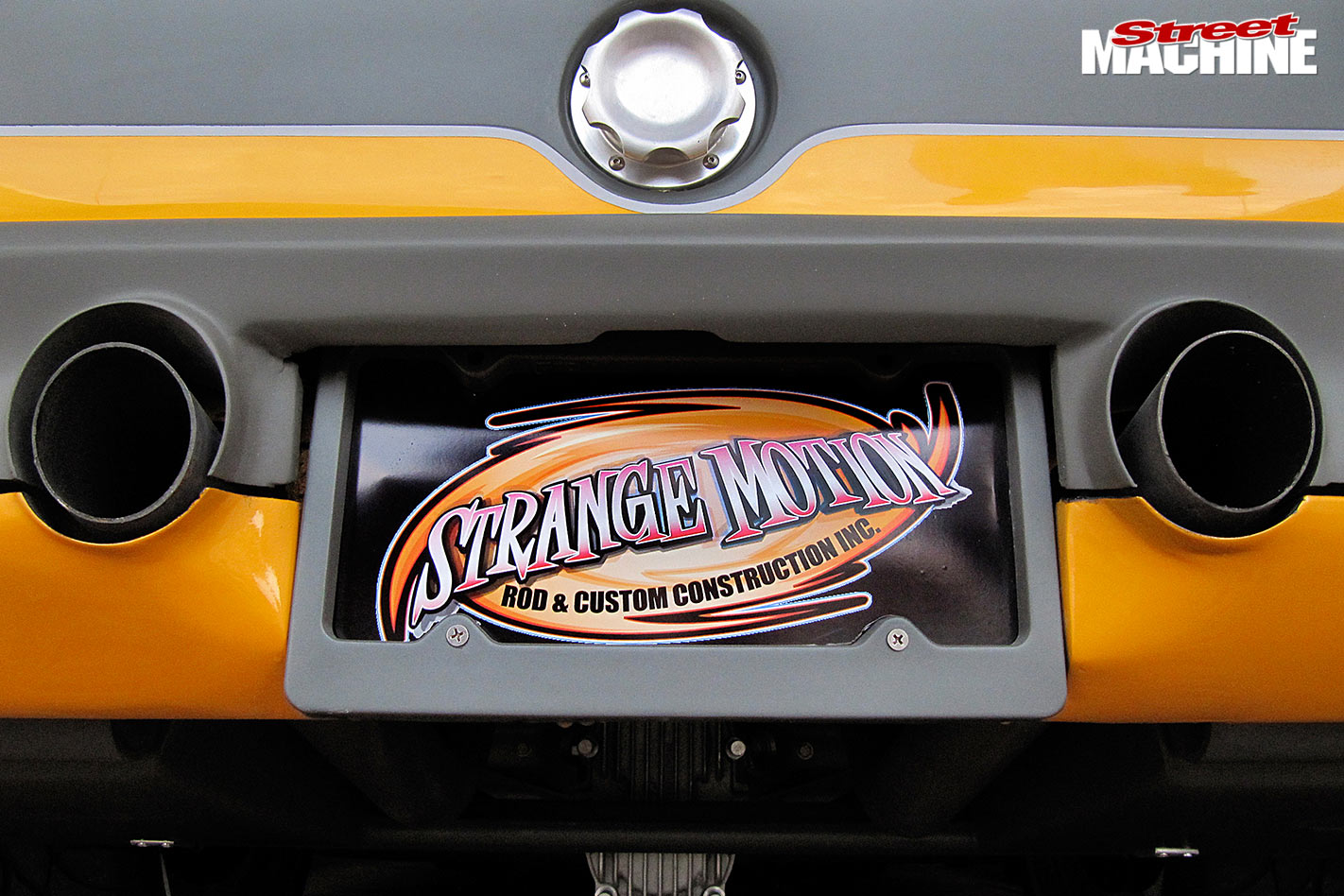 Keeping it smooth, he shaved the drip rails, fitted flush front and rear glass, trimmed and tucked the bumpers and made moulded-in valances. And then there’s the full custom front end, using stock headlight rings with everything fabricated in a slightly modern industrial manner, though with a nod to 60s race cars in the stainless mesh inserts.

With the body finished, Tim added two-tone paint in Hot Hues Amber Ecstasy and Satin Charcoal, separating the colours with a wide white pinstripe. He also painted the chassis in Satin Charcoal. 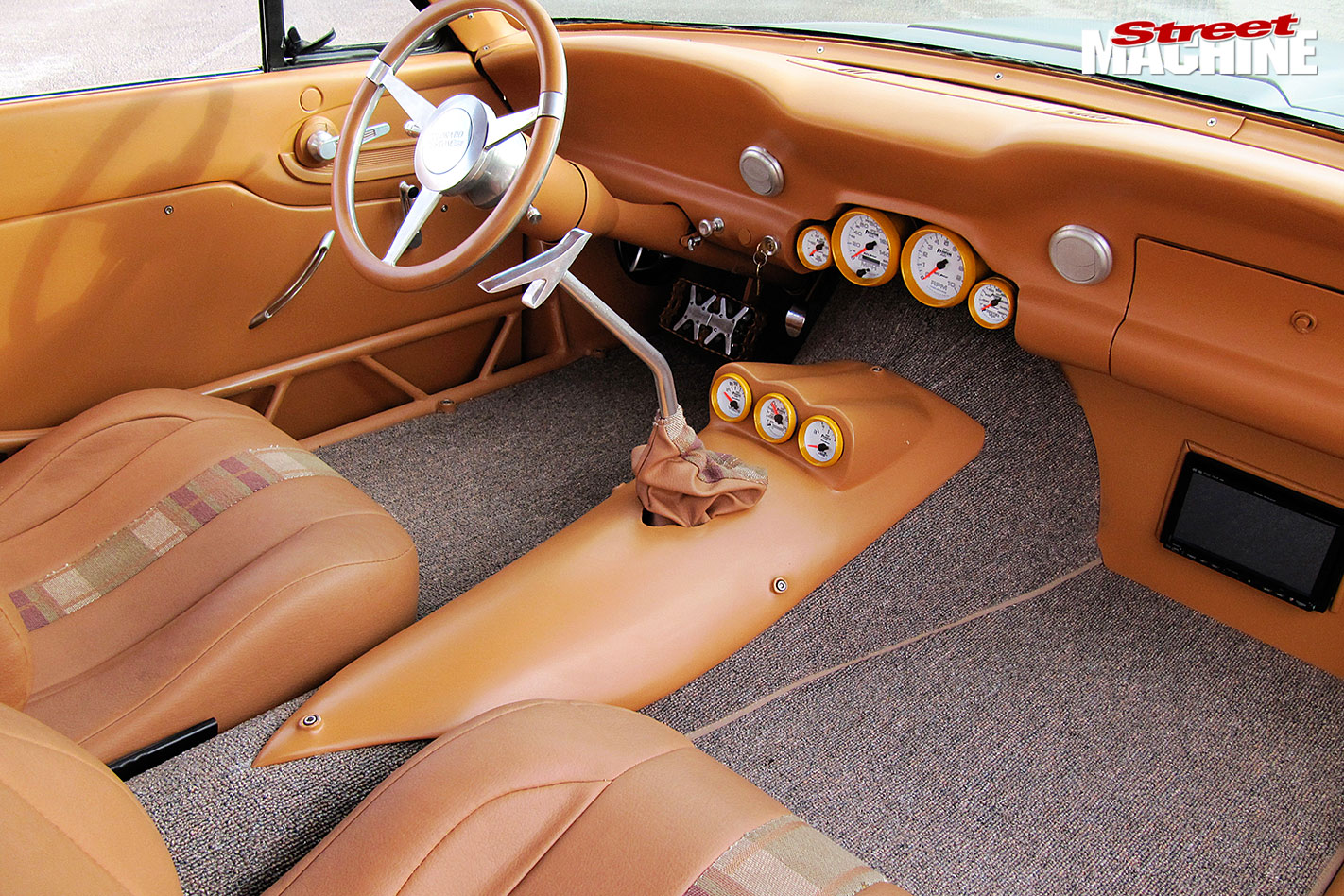 “I had this combination in mind from the start. I knew it’d look right, mixing bright and dull surfaces with strong tonal differences.”

The interior is mostly fabbed in sheet metal — including the headliner. He created that from one sheet, rolled on the English wheel, hammered to a fine finish with a planishing hammer and bolted in using his bungs. The hand-formed steel interior includes a perimeter ’cage that strengthens the frame beside and behind the seats, using a tubing structure similar to the chassis. The seats are custom two-piece items while the rear seat area is now filled with a full Kicker stereo system, running six speakers. 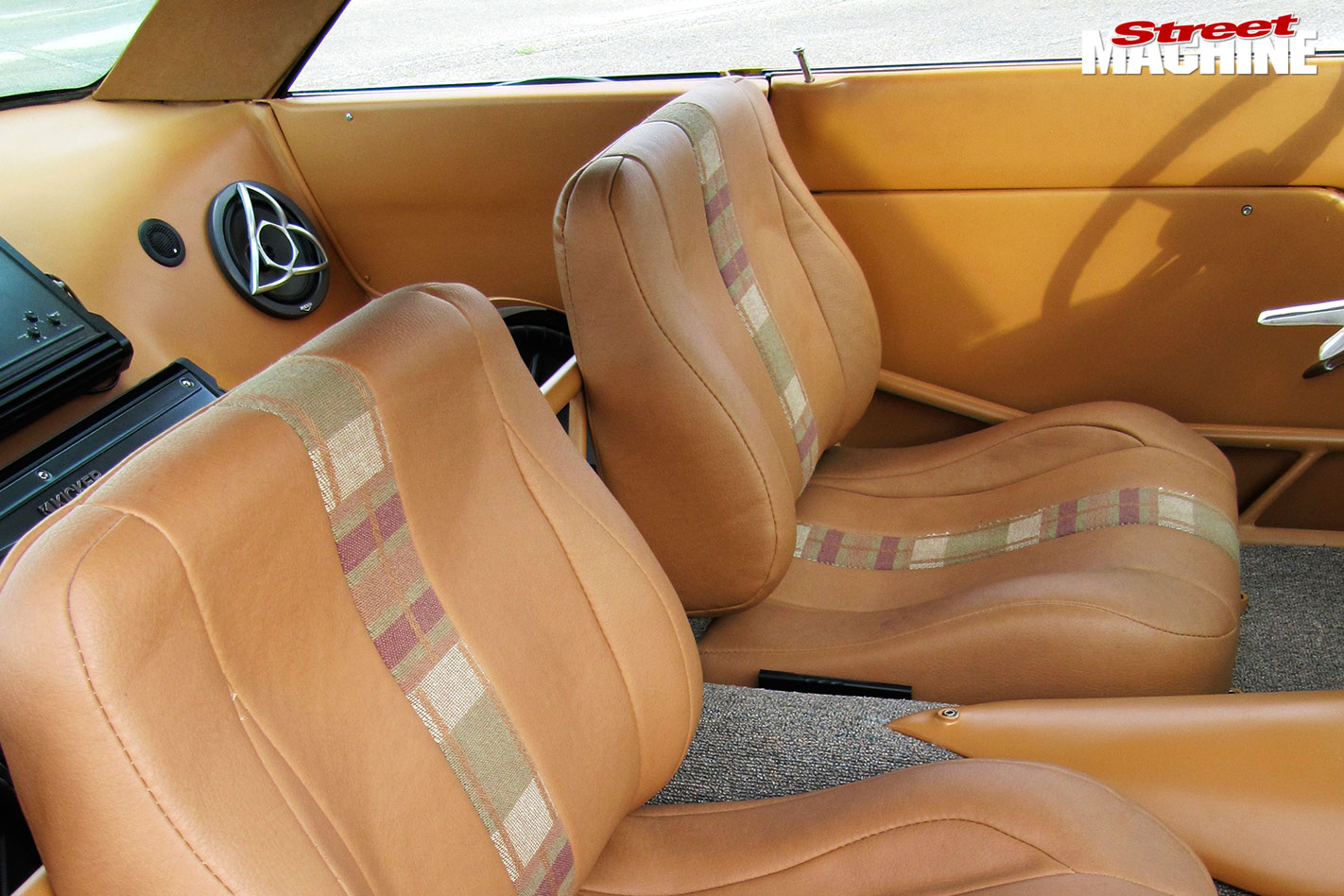 The dash retains the factory shape but the gauges are mounted in two pods, in the centre of the dash and the console. Tim smoothed it, retaining the stock glovebox and adding new air vents and a custom Ididit tilt steering column. The metalwork is finished in matt tan paint, matching the seats trimmed by Carrie Strange at Strange Motion using tan leather and multi-toned wool inserts. The floor-mounted B&M shifter is topped with a billet Falcon shift knob.

Tim and his wife are BMX racers, so a neat touch is the brake pedal made of BMX caged pedals mounted to a custom arm. He also used BMX handlebar stems to hold the custom fuel tank and Be Cool radiator. 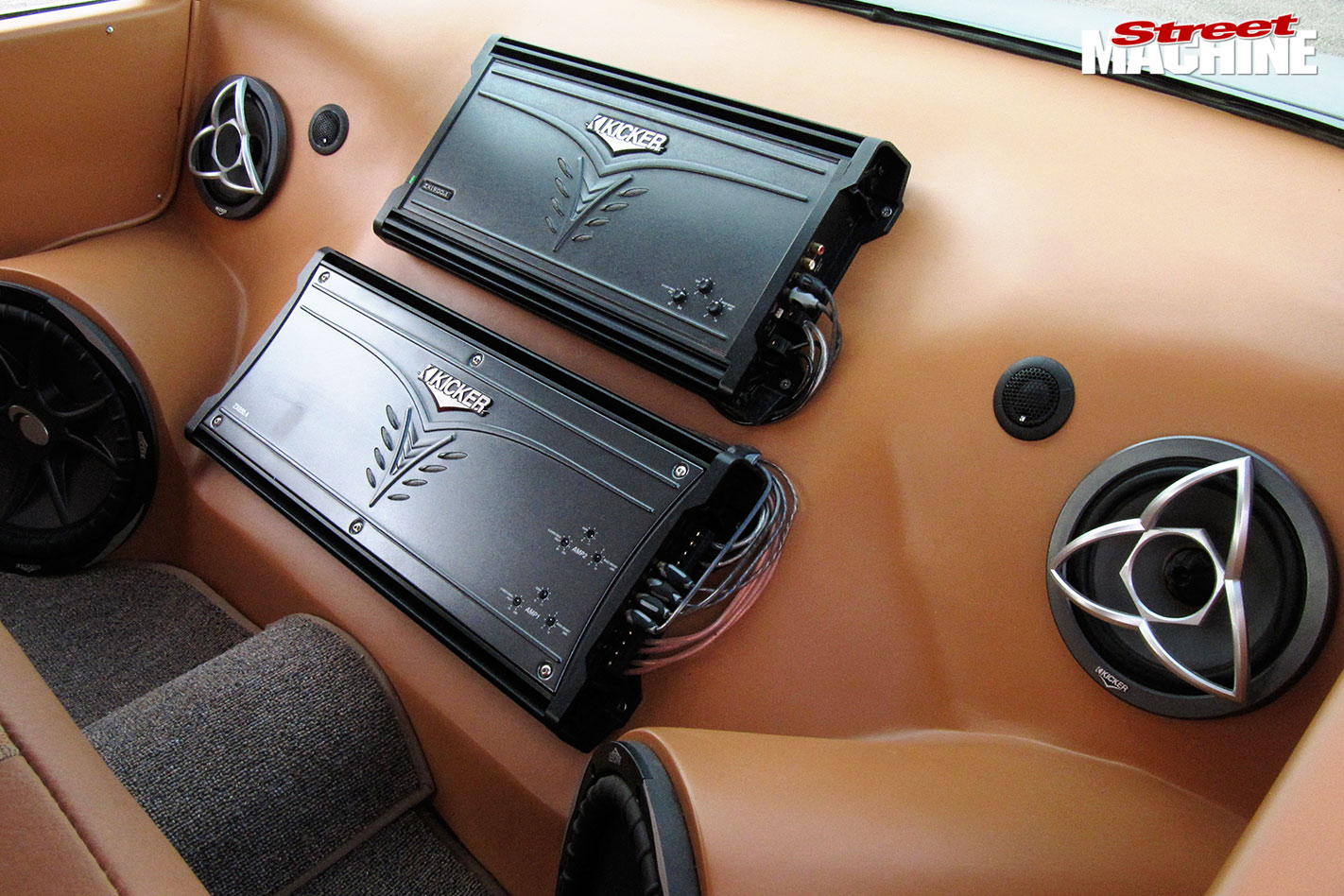 The back seat was sacrificed  to make way for a serious Kicker system, wtih two 12in subs, four sets of component speakers and two big amps. Dynamat is used throughout

For power, he stuffed a ProCharged and intercooled 2002 Ford Racing SVT Cobra engine in the bay, with its throttlebody moved down out of view and the OEM mounts scraped off, then hid all the plumbing. He made billet cam box plates to go over the ’plugs, a new induction and a belt-drive cover, and painted select parts body colour. 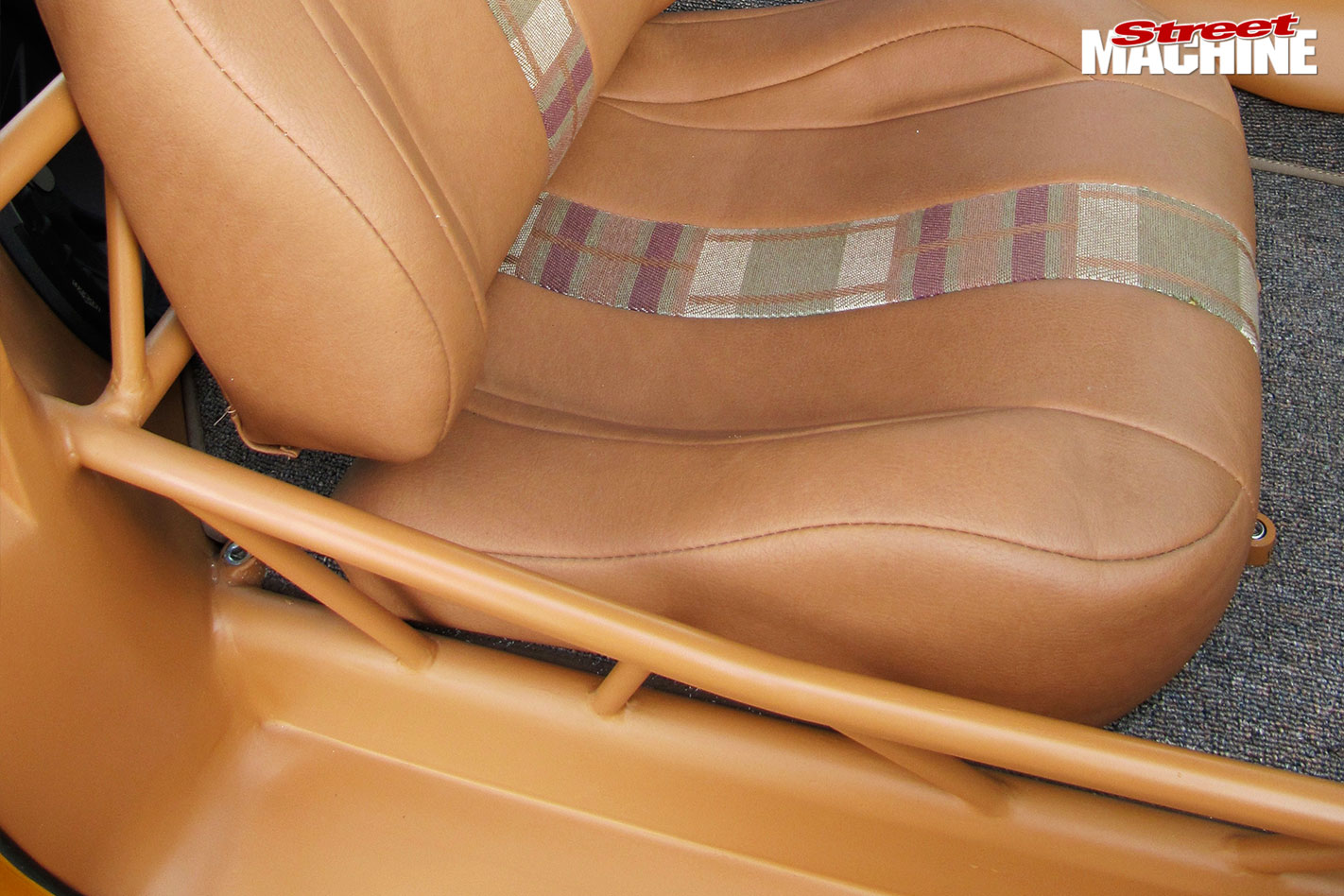 The exhaust consists of a titanium-coated 2.5-inch system and a pair of Flowmaster Super 40 mufflers, with the tailpipes exiting through the rear bumper.

To plug the Modular V8 into an older body, Tim and Ryan used a combination of Detail Zone and Painless Wiring harnesses to eliminate most of the issues in the conversion. Ryan finished off the wet system hook-ups and added Bonspeed Big Block wheels — 18x7s and 20x10s — wrapped in BF Goodrich rubber. 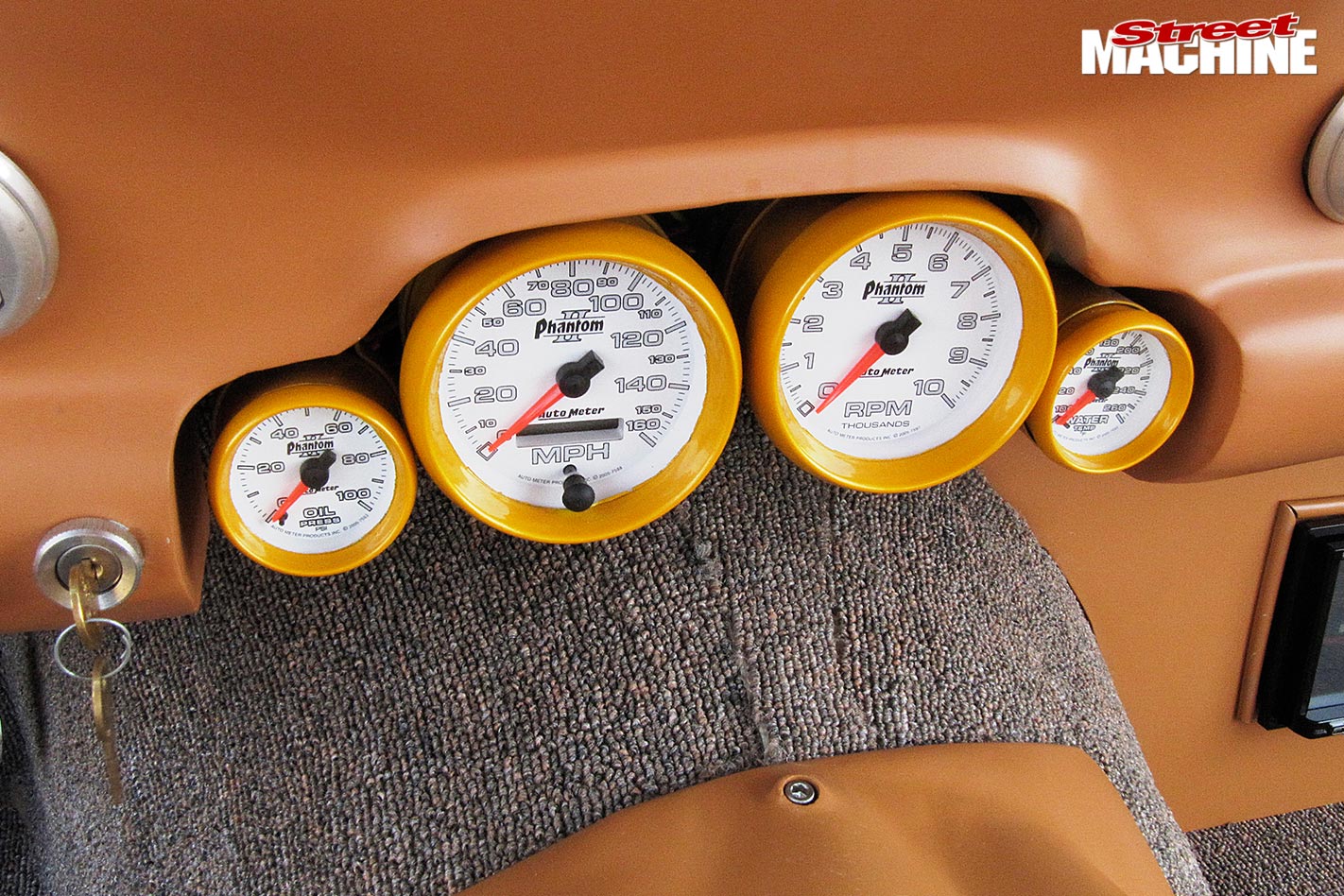 When the Falcon was finished, it made its debut at the 2009 Detroit Autorama, where it took second place in Pro Touring.

“We put the car up in the air and placed mirrors under it to showcase the chassis. It went over well and will be the poster car for November’s Denver Rod & Custom Show. 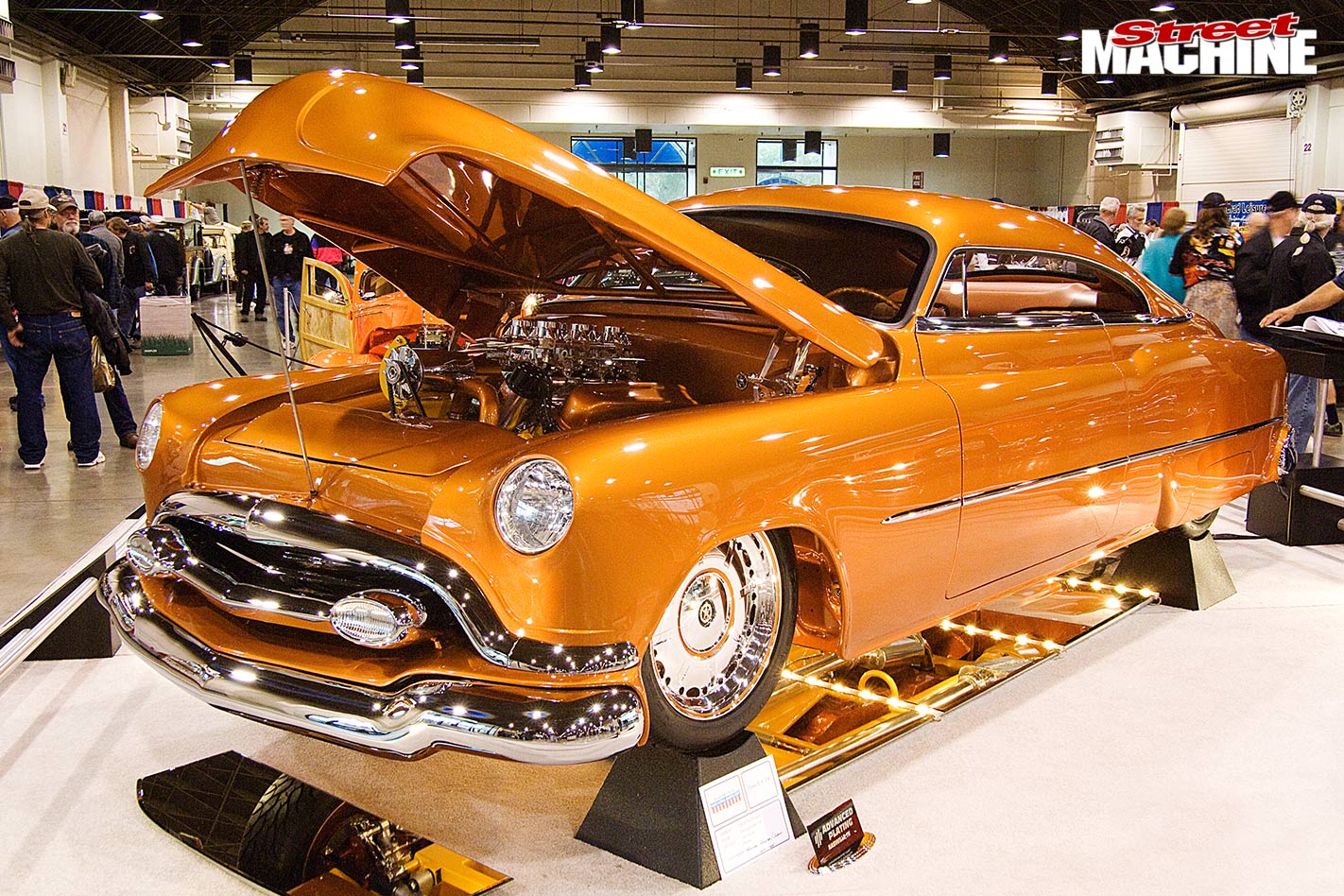 Tim has built some beautiful cars over the years, but the cream of the crop is probably Eric Hansen’s ’52 Buick Riviera hardtop, which features a ’48 Buick fastback roof and a sectioned ’51 boot lid — a modern take on the traditional custom

“It was cool to build a car with almost free rein, especially a Falcon, which isn’t often taken to this level. But having spent so long building it for two different owners, that’s a chore I won’t want to repeat.”