IT’S HARD to believe, but most of the first-generation Commodores are over 30 years old. Like Monaros and Toranas before them, good ones are getting hard to find, but as Dan Malone’s positively evil-looking METHFIEND VH proves, they make a great foundation for a head-kicking Pro Street build. 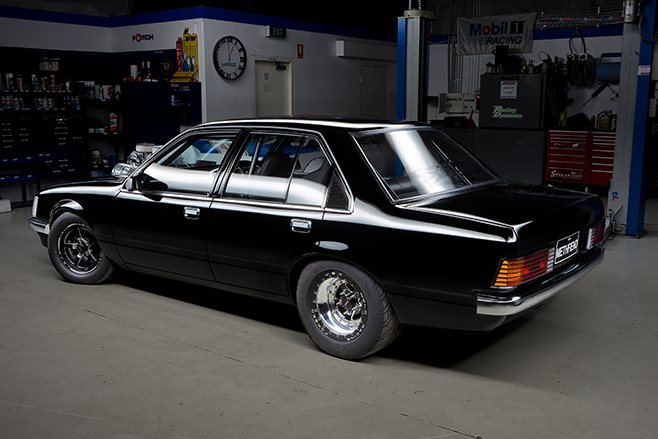 When Perth-based Dan bought the car it was a bare, painted shell and a pile of genuine, still-in-the-plastic NOS Holden parts. “It was painted Ford Citric Acid and came with a 350 Chev/Turbo 350 combo,” Dan said. “If I had put it together as it was, it would have been a nice little 450hp streeter.”

As you can tell by the fact that the VH is now as black as the ace of spades and packing a towering 8/71 blower, that’s not the path Dan decided to go down. 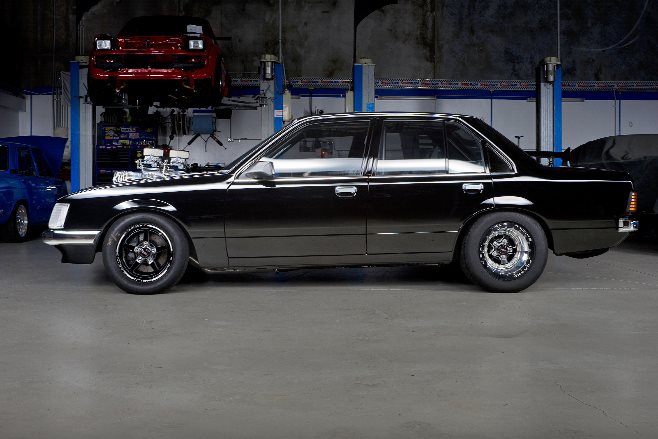 METHFIEND has a drag-inspired look and the hardware to back it up, but is finished to a show-worthy standard. Paint is a custom-mixed candy black – the perfect hue for the tough Pro Street theme

“I sold the 350 because it was never going to be what I wanted,” he explained. “I had always wanted 1000hp, so we bought the Motown block as the basis for a new combo.”

He didn’t think much of the colour either, so he had the shell soda-blasted and the door locks, fuel filler and windscreen wipers deleted. The engine bay also saw extensive remodelling, partly out of necessity to accommodate the Chev, and partly due to prior shoddy workmanship that included liberal use of body filler – 25mm thick in places. The team at Street Rides Panel & Paint started from scratch, fabricating a recessed flat firewall and exquisitely crafted sheet-metal panels for that killer custom look. 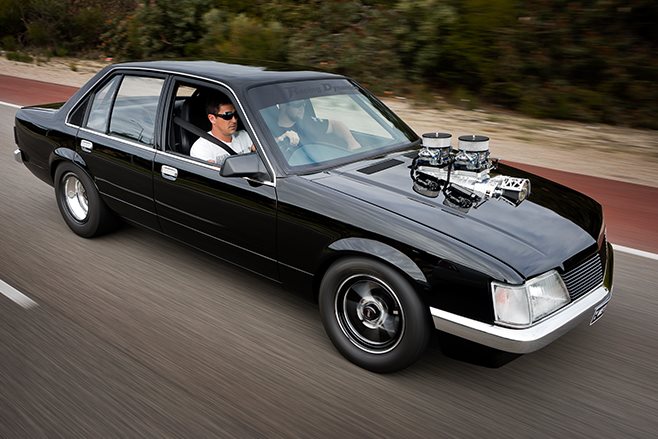 Dan entrusted a local WA workshop with the remainder of the build. “Working on cars bores me to death; I just like pushing the pedal. So I basically gave Tom at Racing Dynamics free reign with the mechanical side of things. They primarily do circuit cars and track support, and a lot of European stuff. This is the first build they’ve done in-house from start to finish.” 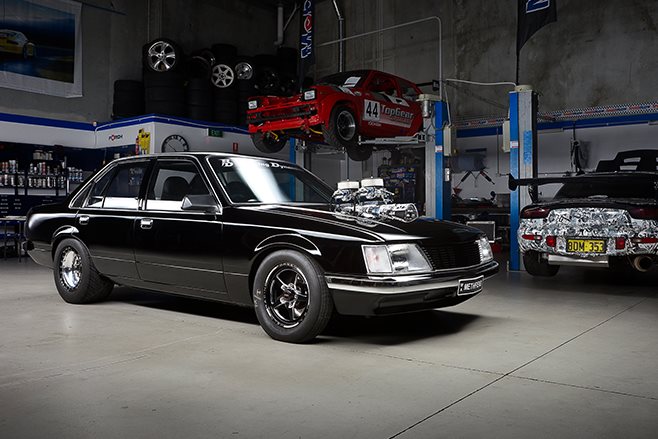 Tom quickly got his head around the Pro Street build, and the mechanical package he conceived for the VH delivers the goods. The aforementioned four-bolt World Motown block was used, and with a 4.125in bore and 3.75in stroke, the engine displaces 400ci. It sports a Manley forged crank and Pro Series I-beam rods and JE forged pistons, along with a custom blower-grind Howards solid roller of considerable proportions (270/290@050 and .675in lift). Heads are CNC-ported AFR 220s, fitted with Crane roller rockers, stainless valves, Manley springs and titanium retainers. Twin Quick Fuel 950 alcohol carbs meter the meth, while a polished Hampton 8/71 blower is currently underdriven and configured to produce a modest 10psi of boost. 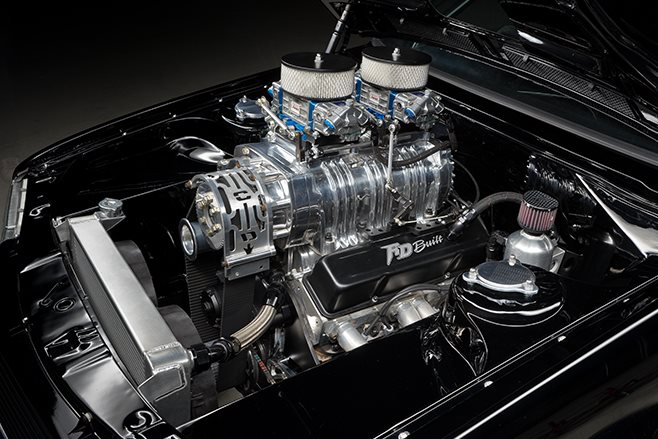 Extensive sheet-metal work in the engine bay provides a stunning stage for the neatly detailed small-block Chev. The 8/71-blown 400-cuber is good for 985hp at the crank on just 10psi of boost

Despite this, it still managed to produce an impressive 985hp at 7400rpm and 785ft-lb at the engine, within a whisker of Dan’s 1000hp goal. As Tom from Racing Dynamics explains, it’s a fairly conservative state of tune.

“The original plan was to run the blower at 20 per cent overdriven and pump around 20psi into it, but on its first pull we backed off at 5500rpm as it was already producing over 960hp and 930ft-lb,” Tom said. 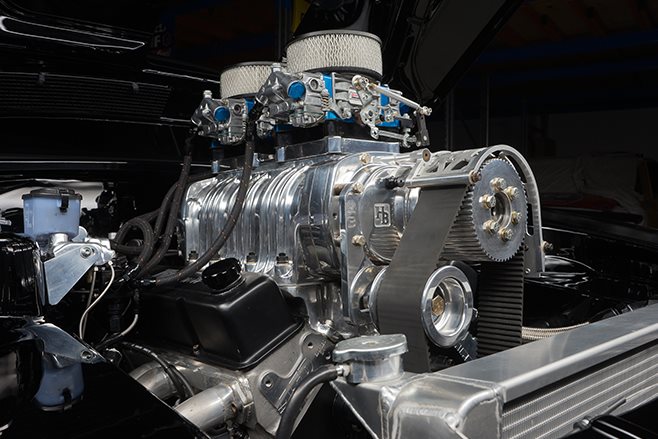 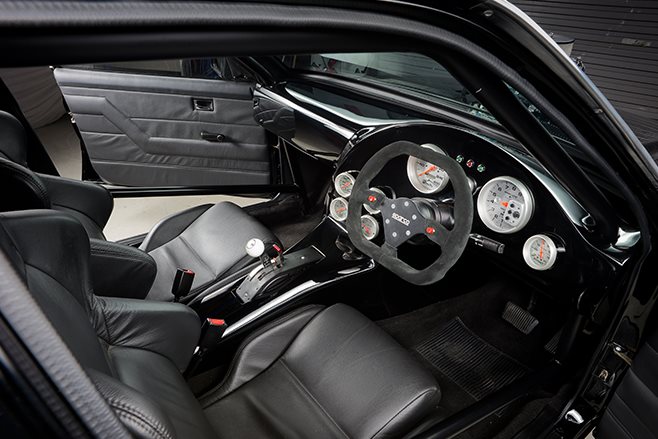 The custom fibreglass dash is a work of art, and was fashioned in-house at Racing Dynamics. The cockpit is minimalist yet beautifully put together – there’s no need for a stereo with a blown, meth-chugging Chev providing all the necessary aural stimulation

Stepping inside, the talking point of the interior is the beautifully flowing custom fibreglass dash and console, sculpted by Jared at Racing Dynamics. The simplistic, race-inspired layout houses a full complement of Auto Meter instruments, warning lights and a B&M Pro Ratchet shifter. It also clips in and out of the car quickly and easily, making electrical work a breeze. Other highlights include the colour-coded six-point ’cage, racy Sparco tiller, heavily modified Saas buckets and a stunning black leather retrim by Chris at TrimCare. 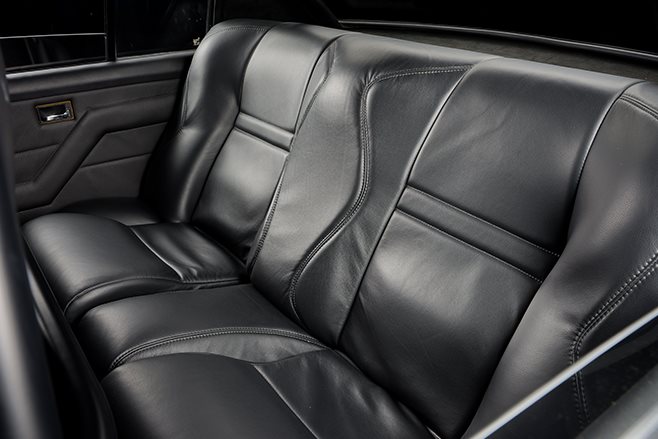 The car’s deadline of Motorvation arrived and Dan was out there blazing tyres with the best of them, but only thanks to a massive last-ditch dig from the Racing Dynamics team. Just seven days out from the event, METHFIEND was still a gutted shell. “We didn’t even get the blower until three weeks before Motorvation,” Dan said. “There were a few tense moments but the boys went crazy and got it done. I take my hat off to them.” 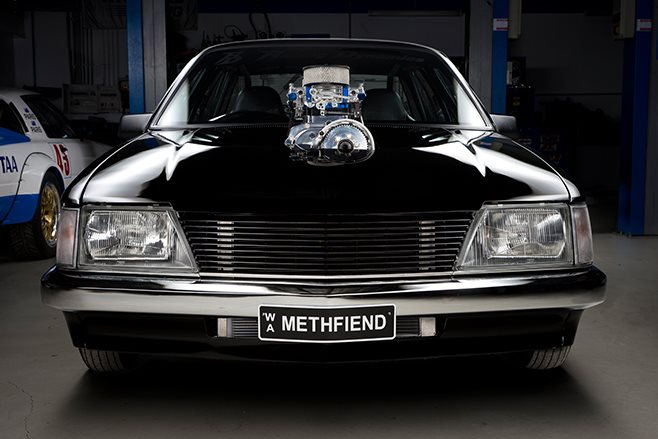 Dan initially planned to do a whole season of drag racing with the car, but it turned out better than expected so those plans are on the backburner. “The body is so straight and the paint is like glass; I don’t want to ruin it!” he said.

“I haven’t been to the drags yet, but they reckon it should do a high eight with everything set up perfectly. I want to show it for a while and do Powercruise and Motorvation and take it for the odd cruise. It’s pretty heavy on juice, though – it drank 30 litres in 9km on the day of the shoot!” 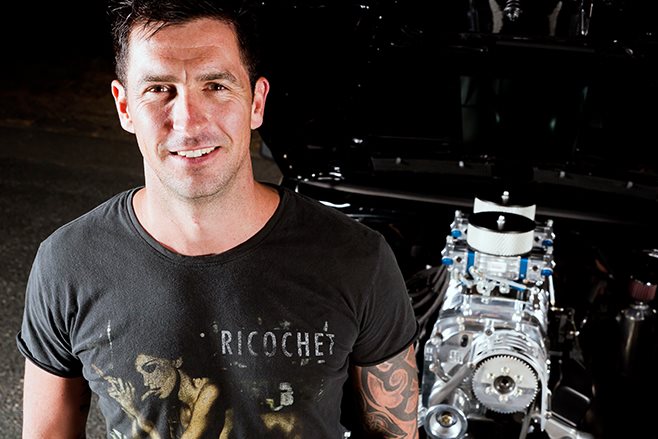