It’s got eight cylinders and a blower, but it’s like nothing you’ve ever seen.

This article was originaly published in the December 2013 issue of Street Machine.

I can hear you saying it already: Oh no, not another rat rod! Take a closer look. Yeah, the paint is non-existent, the chassis and most of its components are covered in surface rust, and the interior is minimalist at best, but look again. Check out that engine — apart from the fact you’ve probably never seen one before — eyeball the detailing, how clean it all is, how nice the wires are run and the fabrication on the intake manifold and carb plenums. There’s some pretty tricky shit going on here. The crusty white stuff on the tyres and mountains in the background probably gave you a clue as to where we photographed the car, and although it may seem a little clichéd, Bonneville is the perfect location for this car for a few reasons. The builder and owner of this car, Brian Thomas, is a Salt Lake City local for starters. One of the first places he took the car was the salt flats. The modified roadster style of the car is reminiscent of what guys were running in the very early days of dry lake racing, and if that isn’t enough, Brian’s dad Richard runs an awesome flathead-powered ’53 F100 that set a record at just over 109mph.

The build started off from pretty inauspicious beginnings: “A friend of my dad’s came into town from Vegas and he had a trailer full of shit. He had those doors and that cowl and a bunch of other stuff, but what started the whole project was the acquisition of the engine. The engine came first, the blower came second and the car came after all the rest of that.” 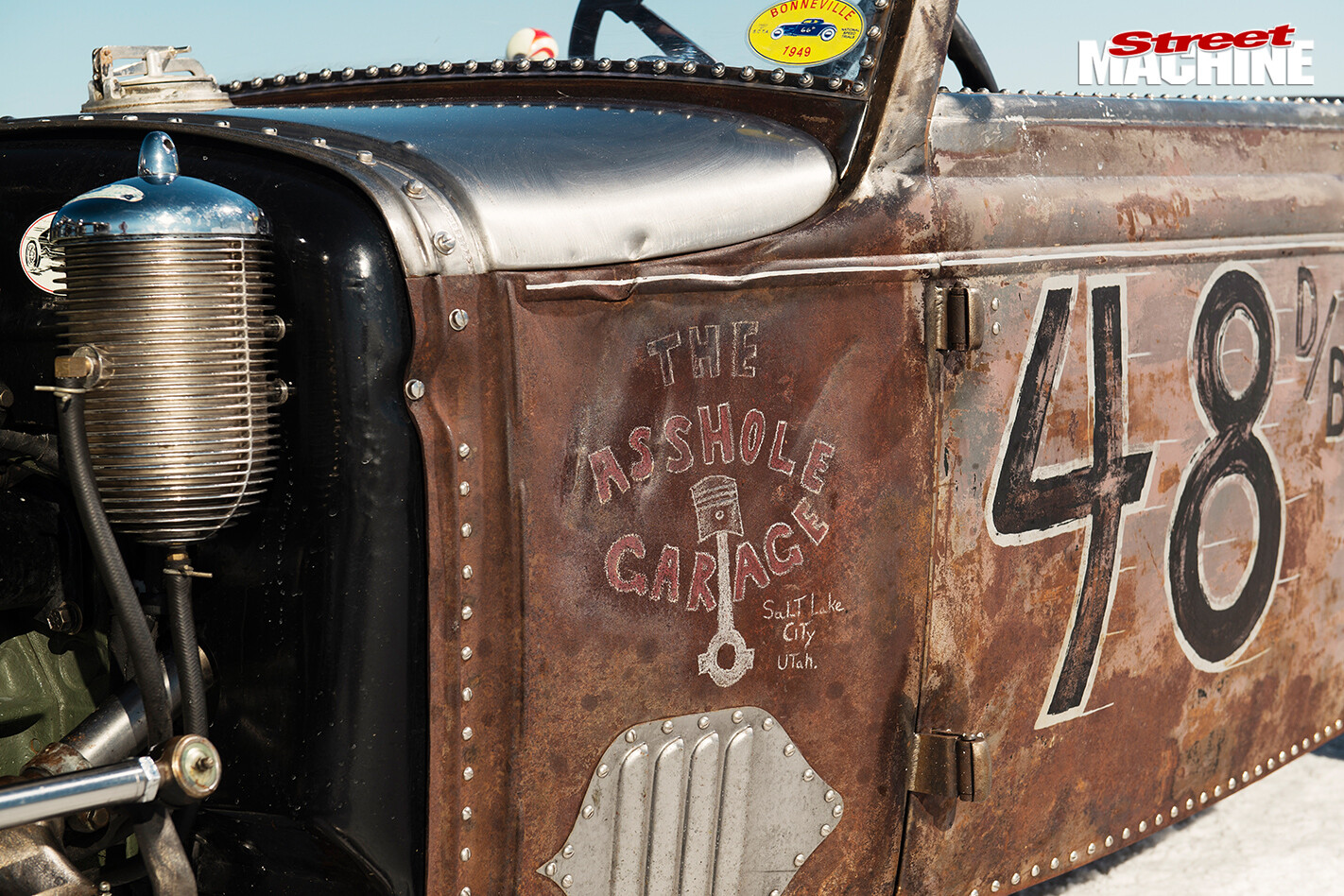 That engine is a 1948 Packard Straight 8 flathead. It measures up at 327 cubes and has a great sounding exhaust note, partly due to the open lakes pipes, but largely due to the custom ground Isky cam that Ed Iskenderian personally ground for Brian after meeting him at the salt one year. It just doesn’t get any cooler than that.

Brian comes from a long line of horse traders, so most of the parts on the car he swapped or found at swap meets, including the blower: “It’s sitting on the ground, so I pick it up and the guy says: ‘Five hundred bucks.’ I said: ‘Looks like you’re going to keep it, dude, five hundred bucks is too rich for me.’ I came back later that afternoon and he still had it, I knew he would because he’s telling everybody 500 bucks.I haggled him pretty hard and got it for 200 bucks. I said: ‘I tell you what, you can take this home and let this sit on the shelf for another 20 years and your kids can sell it for 200 bucks.’” 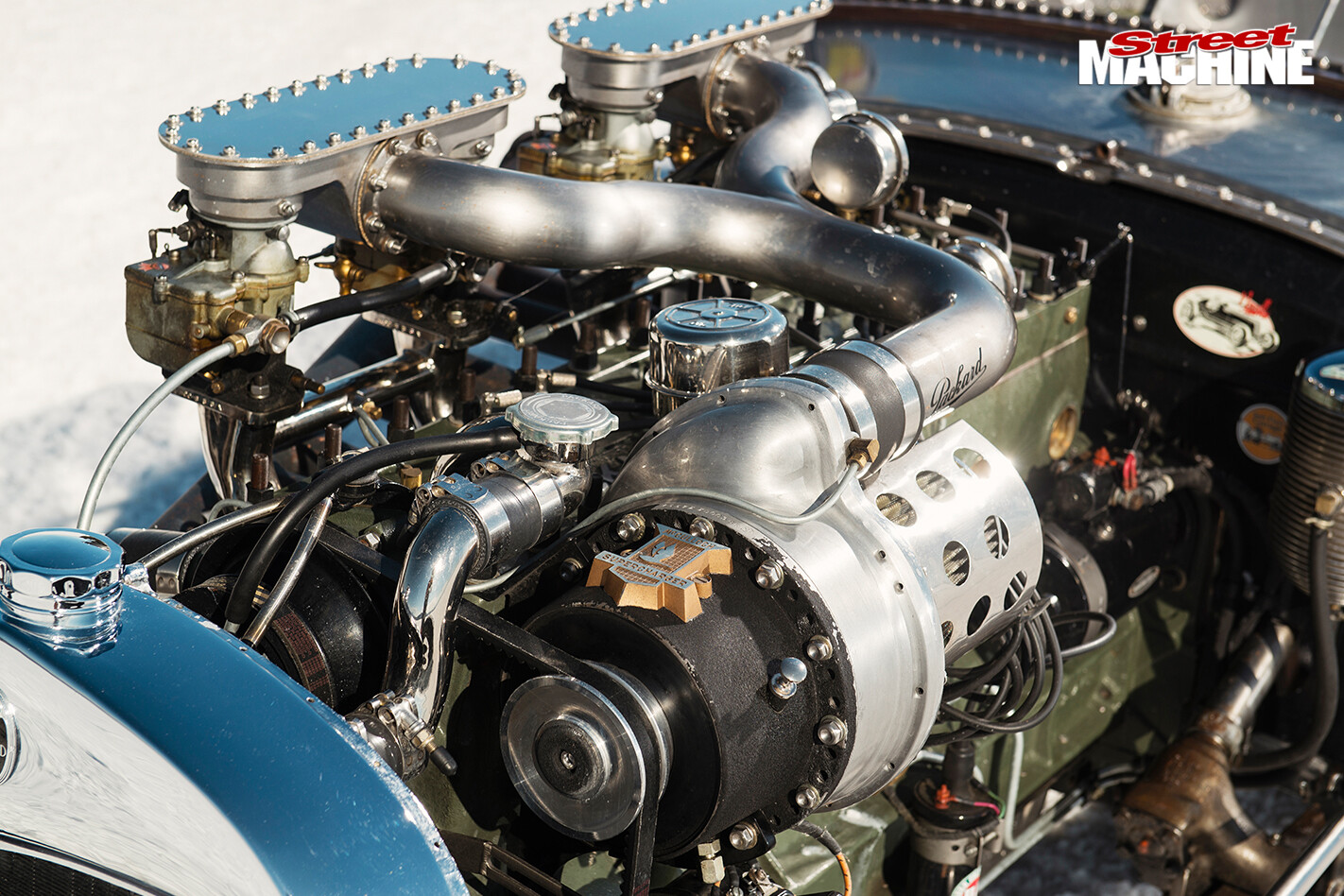 Getting a quartet of old Stromberg carbs to run right and not leak is hard enough, but start shoving some boost through them and the whole game changes: “A lot of people think that blower has got nothing in it because nobody has ever seen anyone build a blow-through set-up like this. Most guys put the carburettors in a box so that you positively charge the outside and the inside, so basically it’s tricking the carburettor into thinking that it’s running under atmospheric pressure.”

That wasn’t the look Brian was after, so the Strombergs are extensively modified to suit boost, including sealing the throttle shafts, the choke plates and the accelerator pump, and re-routing the fuel bowl bleeds. “A lot of people asked me how I did it, but I just tell them I’m writing a book and they should make sure they buy one. I had to work out how to do it myself because no-one else knew how to do it.”

The car itself has evolved a little over the years, but the bulk of it was completed in less than 12 months. Part of the inspiration for the car was Post Divorce Stress medication, but a bit of rivalry with some local hot rodders came into the mix too.

“There was a group of guys in North Salt Lake called the Throttlers. They built several little roadsters like this, but they’d start a fight with you if you called their cars rat rods. This car is refined compared to the things they were building. In 2005 I went to one of their open days — where all the chicks get naked and everybody gets as drunk as hell. I meet a few of the guys, and I kind of looked up to them, so I asked one: ‘So, what does a guy have to do to get in with you guys?’ He just looks at me and says: ‘We’re the best of the best, we don’t let anybody into our club. Nobody can build to the level that we build to.’ So I thought, alright motherfuckers, I’m gonna show you guys. I went home with an agenda — to show up the Throttlers.” Mission accomplished we’d say. Brian has since re-married, but it appears the roadster is not really on speaking terms with his wife, Camie: “We took it to the first swap meet of the year, which was in May of ’06, sitting on kitchen chair cushions. On the way home we’re driving along, I look over at Camie and she didn’t look too good, so I grabbed her to ask if she was alright and she slumped over in my lap! The heat coming out that exhaust pipe was horrendous, not to mention the gas and everything else, so that’s what the turnout is for.” There was another incident with a sharp bit of metal on the door and a slashed wrist, but thankfully Camie survived that incident too. The car draws a crowd wherever it goes and there’s so much going on in the details that it’s hard to take it all in on one inspection. The car made the cover of Hot Rod, but Brian is pretty modest about the whole thing: “I never thought for a second this car would have the notoriety it’s got right now. I’m quite humbled by that, because nobody knows me — and that’s fine, I’m not too worried about that — but you talk to somebody in another state and say: ‘Yeah, I got a car, the little blown roadster with the Packard in it,’ and they all know about it.”

Sorry to break it to you, Brian, the rest of the world knows about it as well.