Richard Scerri's 1932 cool was home-built on a budget

This Roadster might look like a showstopper, but in fact Richard Scerri's 1932 Cool was home-built on a budget

THIS is Richard’s Scerri’s third hot rod in 20 years, but the first he’s built from scratch. It’s a traditional 50/60s-style roadster, but it’s pretty much all brand new, and built on a budget you won’t believe (more on that later). Apart from trim, it is 100 per cent the work of Richard and four good mates. 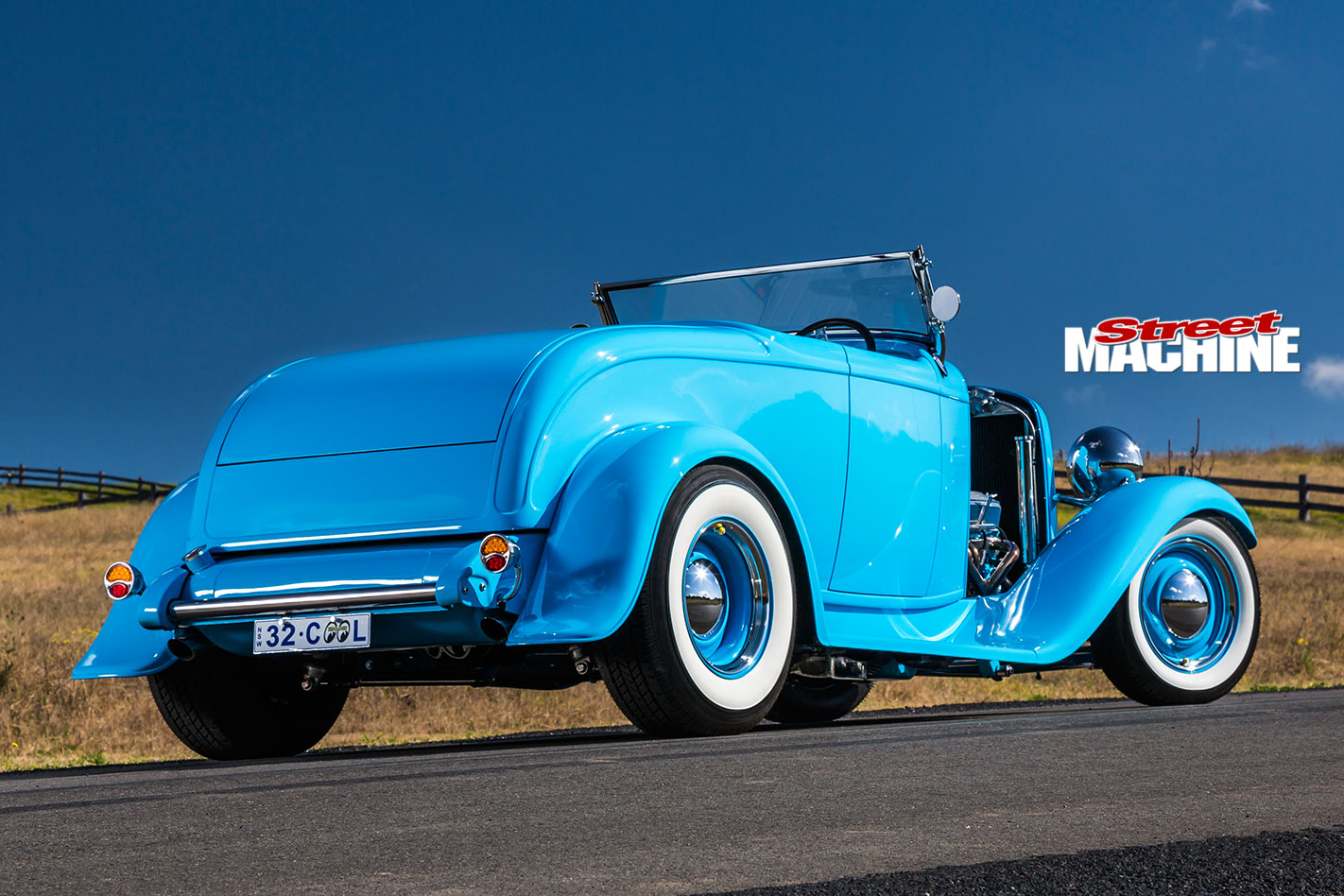 Richard’s first rod was an open-top ’29 Willys; he enjoyed the wind in his hair, but his family less so, and so he moved on to a ’34 tudor, into which he put a lot of work. Turns out the family wasn’t that fussed about driving around in rods with roofs either, and while the ’34 was fun, “it’s still someone else’s car, no matter how much you change it”, he reckons. So having mucked about with cars his whole adult life, Richard felt it was time to build his own. 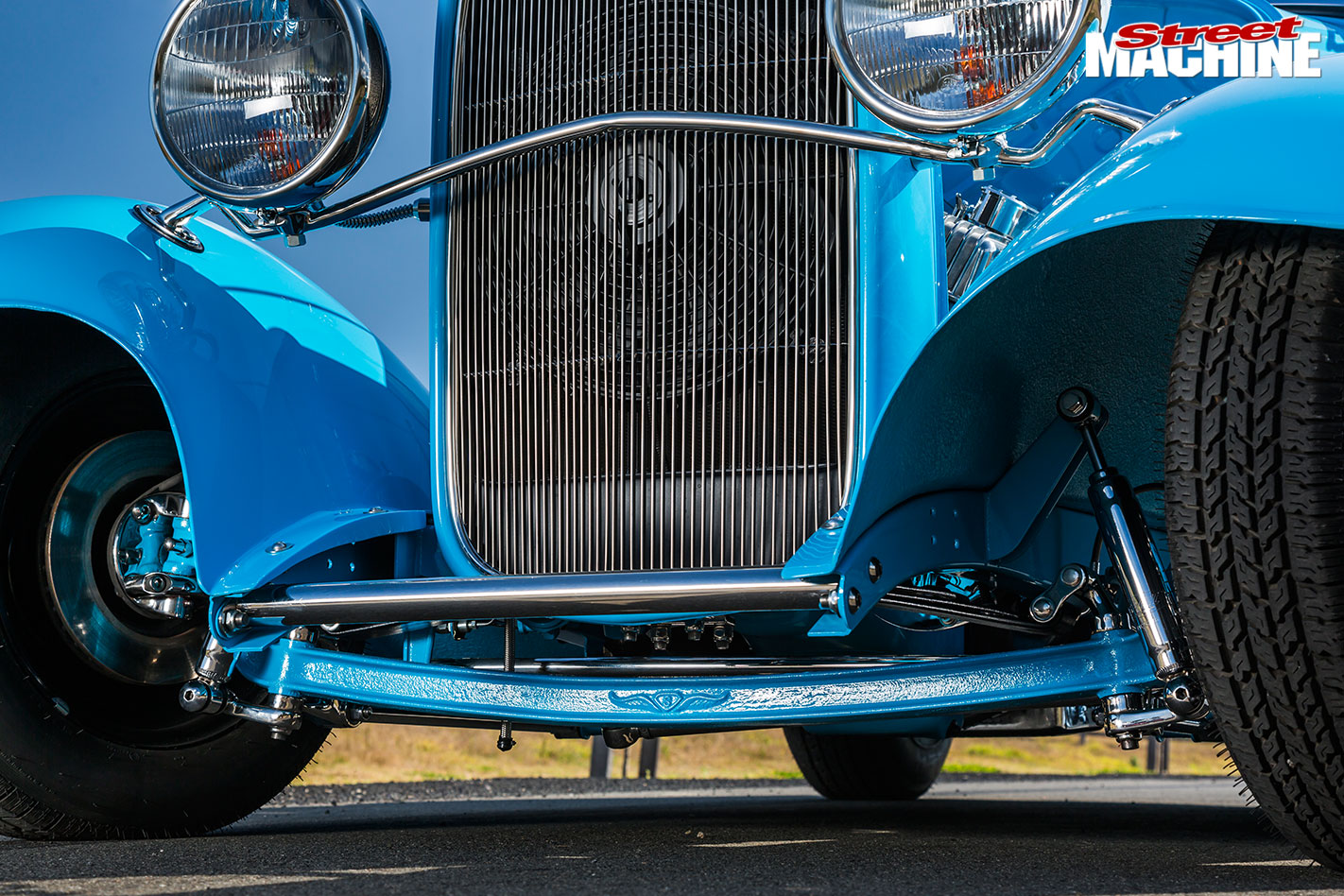 A bare chassis is a good place to start, in this case sourced from Andy’s Restorations in Kurnell, NSW, who also supplied the single-leaf I-beam front end with four-inch drop, coil-over four-bar rear and So-Cal shock absorbers. It was assembled by Richard and his brother-in-law Joe Pisano in their garages, also incorporating an HQ steering box – “we found a brand new one on eBay,” Richard says – with new Mustang-spec disc brakes up front and Ford drums hanging off the nine-inch down back. 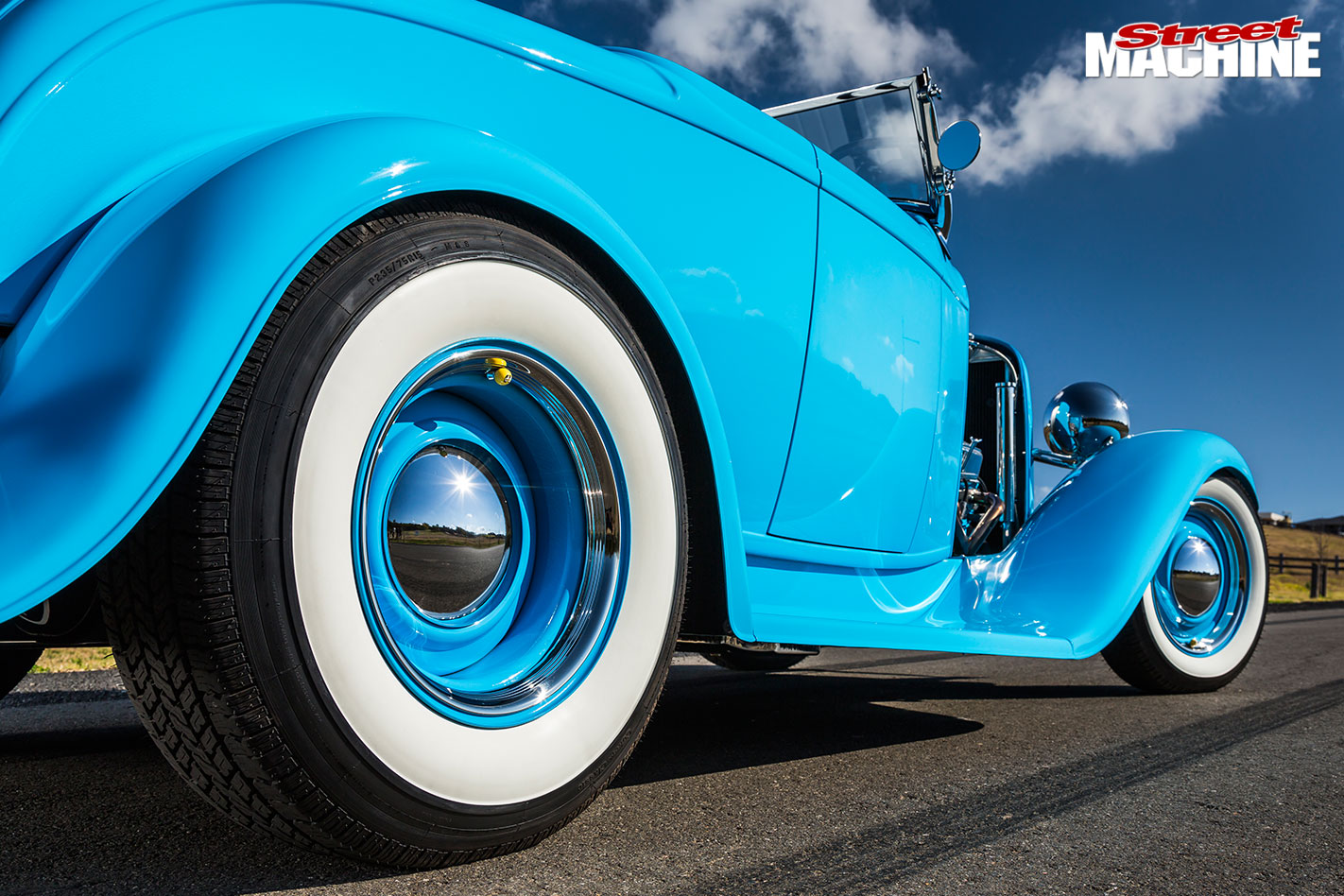 Joe also had a big hand in building the engine, and in so doing was instrumental in raising the finished quality of the whole project to an exceptional level. “Joe made it a better car,” Richard says. “He is extremely meticulous; everything had to be perfect when it came to the engine and chassis. Joe always told me: ‘Street car or not, we are doing it this way!’ We nicknamed him ‘Stainless’; he wanted to build everything out of stainless steel. It took hours and hours of his time, not to mention his wife Rhonda’s lunches and dinners. So not only did I get a great engine, I loaded on some kilos too.” 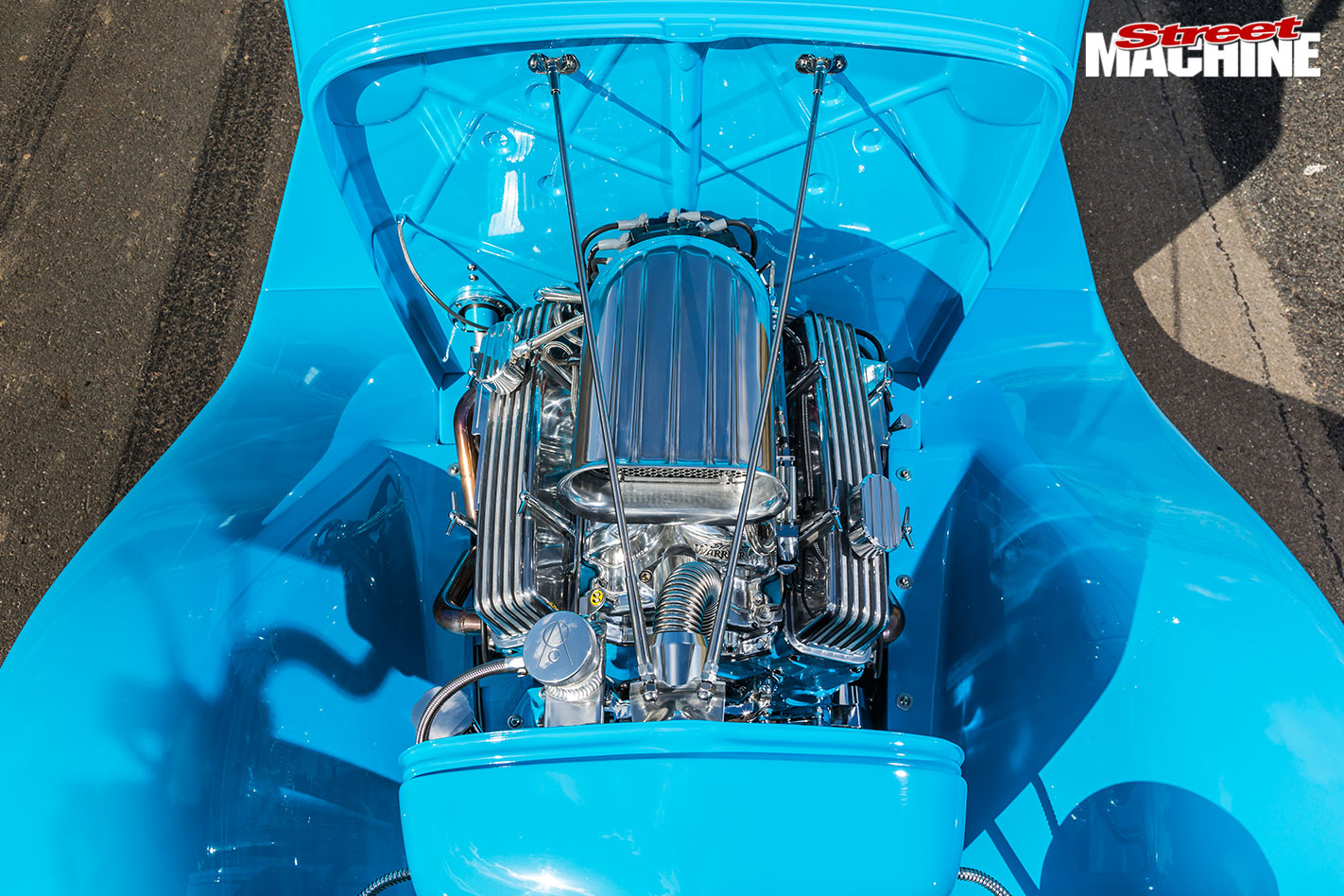 A simple 350 crate motor was sourced through Rocket Industries and topped with a Weiand intake and 600 Holley. It's been dressed up with finned rocker covers and a Hilborn-style scoop and some shiny stuff

The engine is based on a new crate 350 Chev supplied by Rocket Industries and fitted with a 600 Holley on a polished Weiand manifold and a small Camtech camshaft to give it the correct rough idle and note. Charlie Borg and Joe’s son Brad Pisano were also involved, with all keeping keen eyes on the Rocket specials bins for rocker covers and all the other shiny stuff. Block-hugger headers complement the old-school look, matched to Joe’s custom exhaust, while the gearbox is a Turbo 350, again sourced from Rocket. 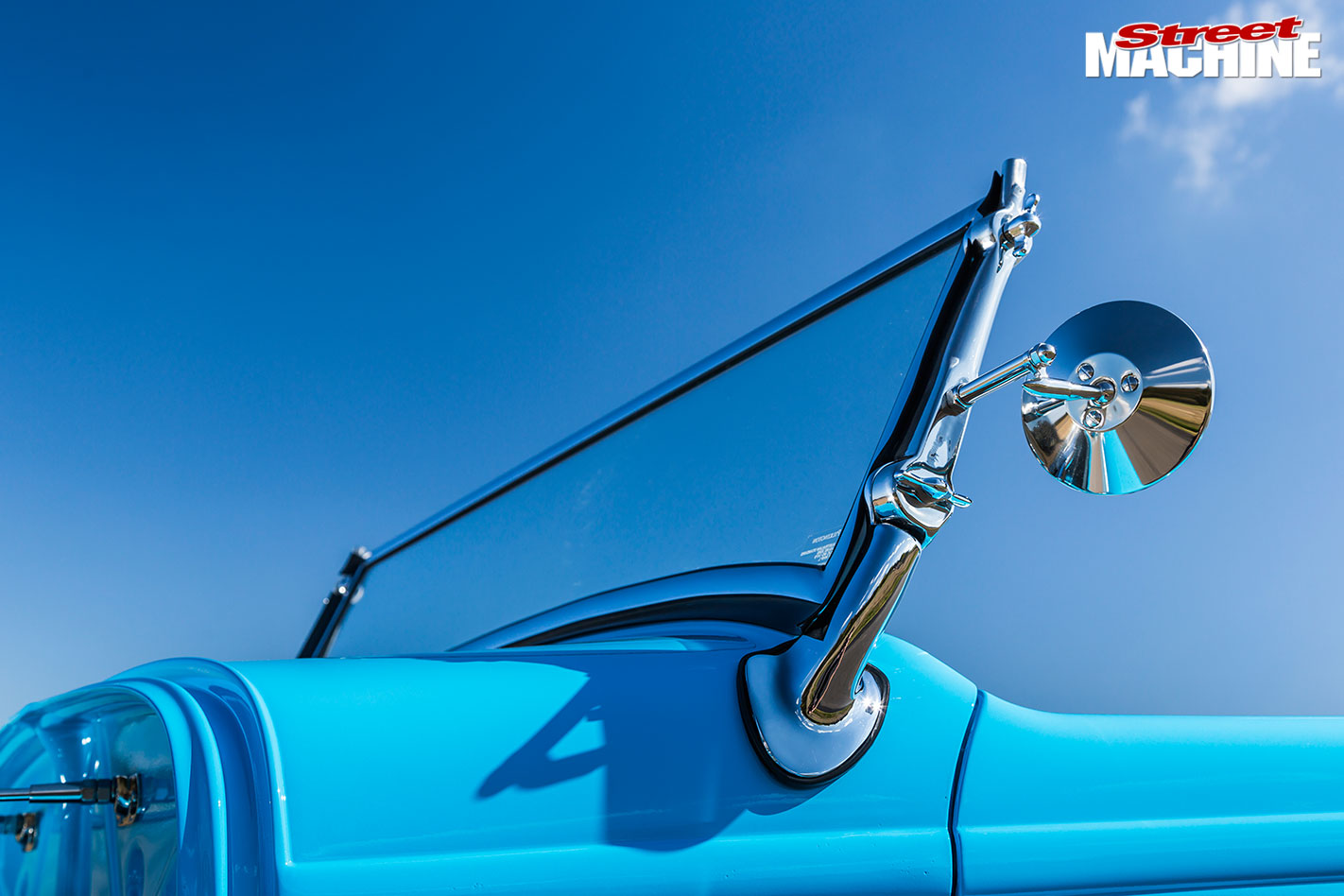 Deuce Customs in Victoria supplied the new steeled-out fibreglass ’32 roadster body. Richard and Darren Midson (known as ANT to his mates) prepared the body themselves, before painting it in a custom mix prepared by Missy at Macarthur Discount Paints. “I had the colour in my head; it was always going to be blue,” Richard says, but it took a family trip to the Wet & Wild amusement park to find exactly the right shade. “I looked at my son’s wristband and said: ‘Keep that, mate – that’s the colour of Dad’s new car.’ 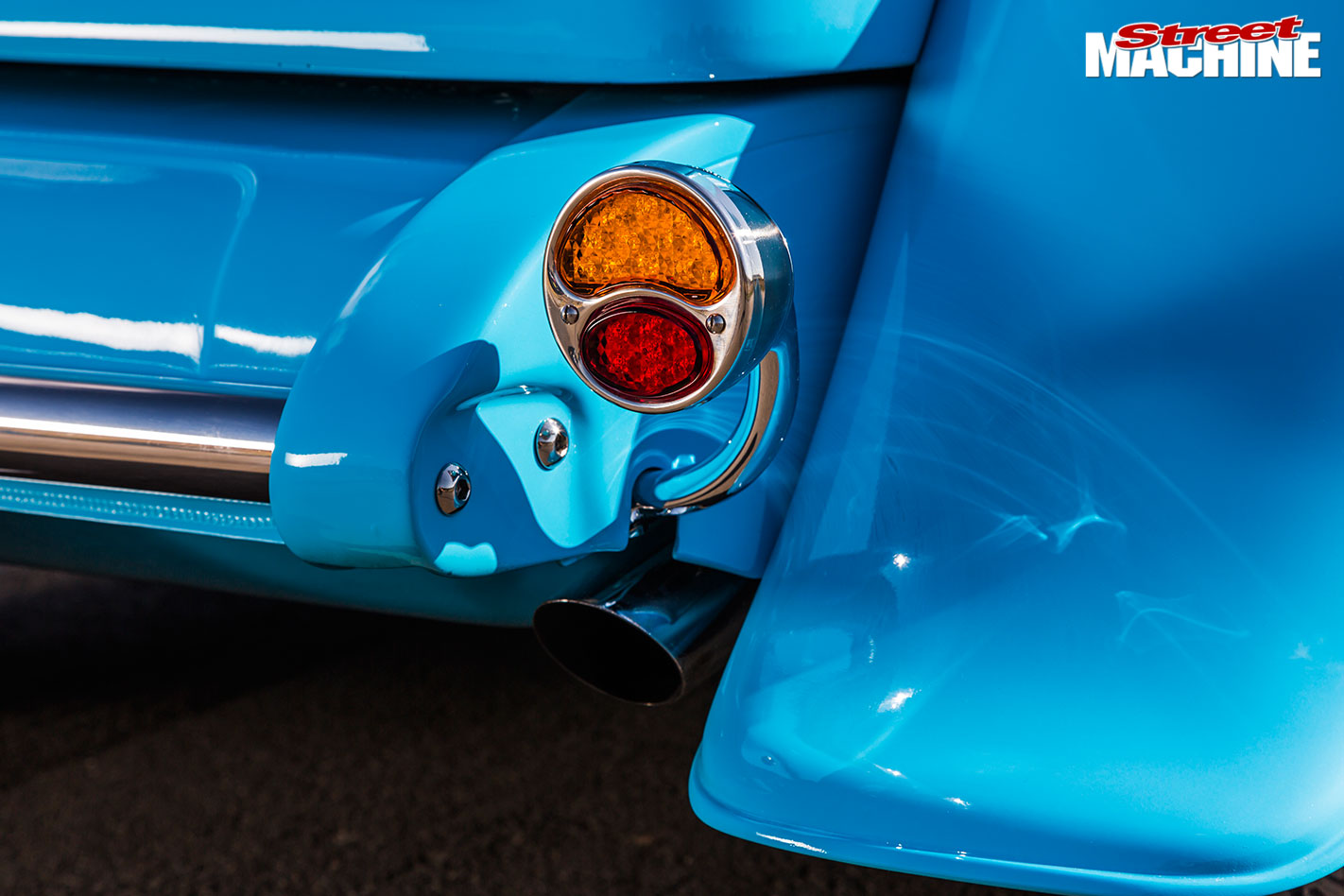 “We painted it in my cardboard factory at Ingleburn over a couple of evenings,” he continues.” At first, we were going to just edge it in – the insides of the doors and the boot – but money was tight so we decided to paint the whole car and just get a flow coat in the booth at the end. The finish off the gun was okay, not too much rubbish in it, so we cut and buffed it at home. It came up a treat, so good that we didn’t have to go to a booth at all, which saved more money.”

In correct period style, Richard’s roadster gets by without a bonnet. “I wanted to keep it clean in that traditional 1950s, early-60s style,” he says. “Fenders or fenderless had us guessing; I’ve always had fenders in the past but when we put the body on, it looked really good without them! But we already had the holes drilled to fit the guards and it looks even better with them on.” 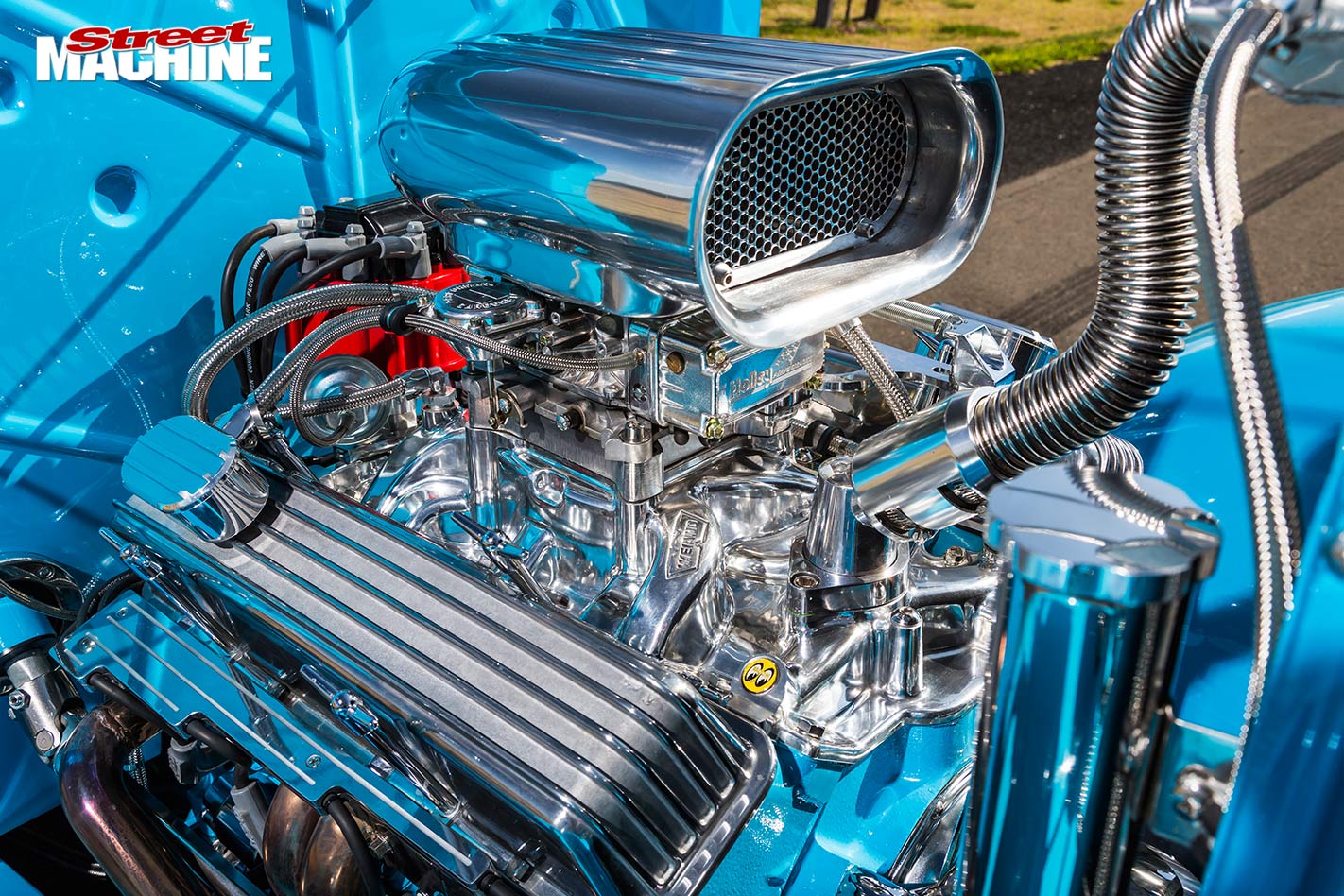 The stainless-steel ’32 Ford grille was supplied by Roadstar Autoparts, while the headlights and headlight bar were sourced online from Hiboy Hot Rods. The tail-light mounts have been subtly modified to tuck in and hug the rear of the car for a cleaner look. Wheels are steel 15-inch Smoothies painted to match the body, with Baby Moon hubcaps and chrome dress rims. Whitewall radial tyres – 165s on 5in-wide rims up front, 235s on 8in-wide rims down back – add to the perfect stance. 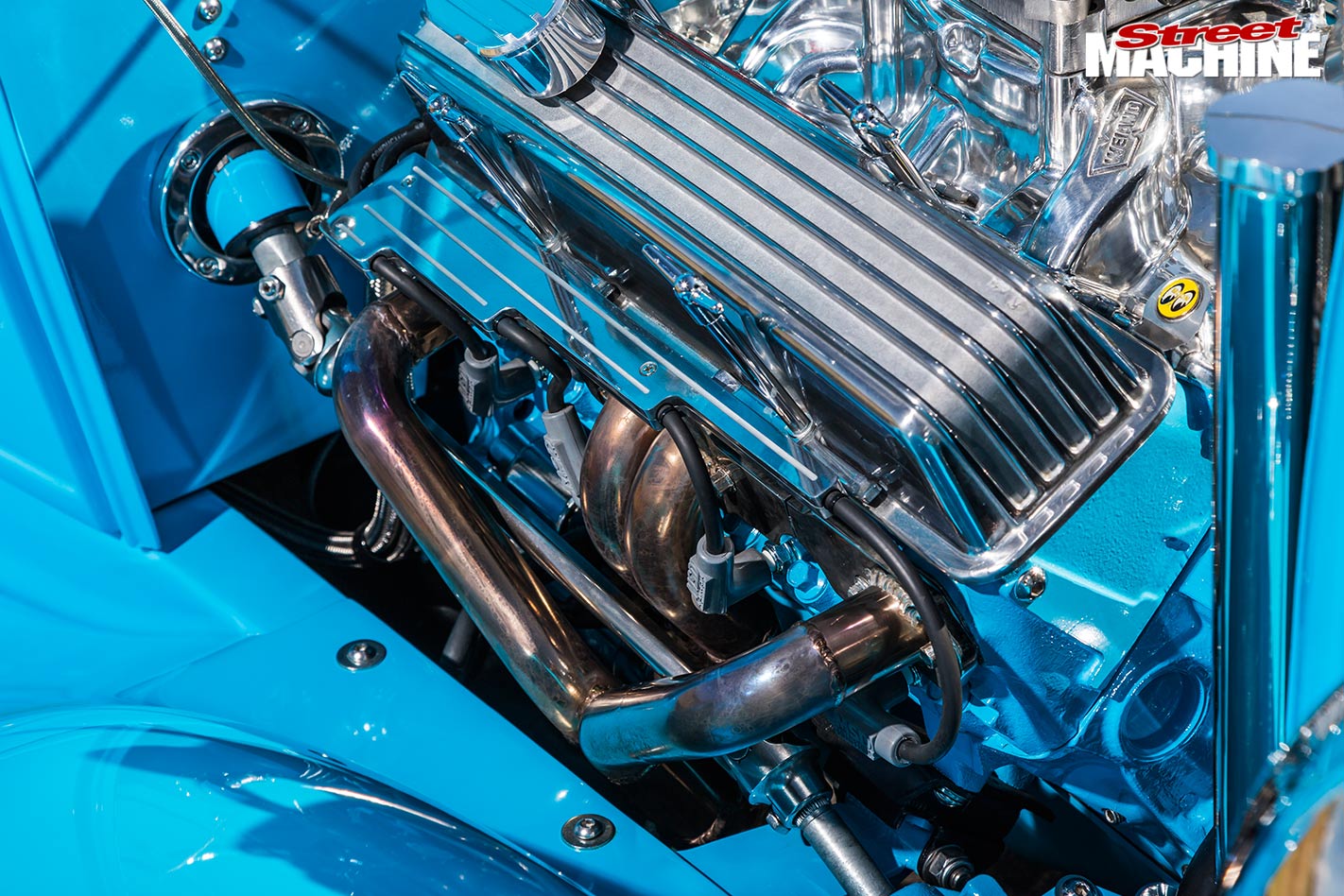 It's a home-built car, but that doesn't mean you can't detail it as nicely as the professionals. A lick of paint on the engine block and a bit of shine go a long way

Richard also does without a roof, or side and rear windows, a big factor in building a hot rod for not much money. “It’s a good-weather car,” he says. Windscreen posts were sourced on the internet, while Andy’s Restorations supplied the glass. Just as well the bench seat, door cards and kick panels are trimmed in easy-to-clean, spray-on/wipe-off leatherette, which also suited the budget, of course, and the car’s minimalist design, without compromising quality. “I wanted the interior to look as plain as I could get,” Richard says. “X-Trim in Smeaton Grange did a great job and are an awesome bunch of guys.” 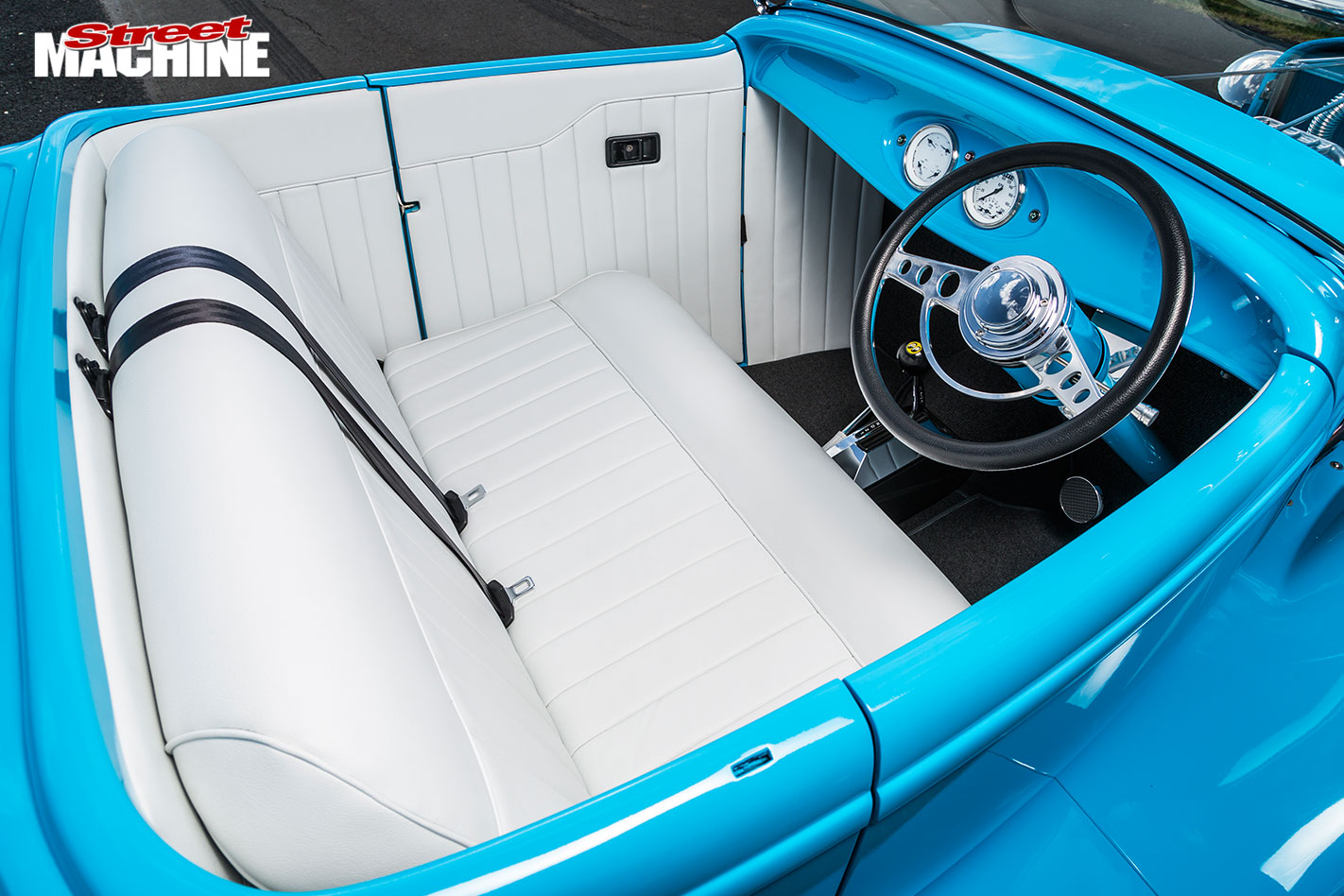 The interior is as simple and understated as the rest of the car. The white vinyl can be cleaned up with a quick spray and wipe

A Billet Specialties tiller is mounted on an Ididit steering column, while the Hurst shifter was chosen because it was on special somewhere. TCR Carponents in Melbourne supplied a pair of Classic Instruments gauges, with the right-hand speedo pod also housing a crescent-shaped tacho at the bottom and the left-hand cluster containing individual gauges for fuel, temp, volts and oil pressure. The ignition switch is under the dash to the left of the steering column.

Richard doesn’t mind his driving music, not that you’d know from the photos. When the ignition is switched on, an entertainment/GPS unit with seven-inch touchscreen automatically pivots down from its hidden location under the centre of the dashboard. Once his selection is made, one push of a button has it disappear from sight, with tunes blasting from four Kenwood speakers hidden behind the back of the seat. Brad plumbed it all in. 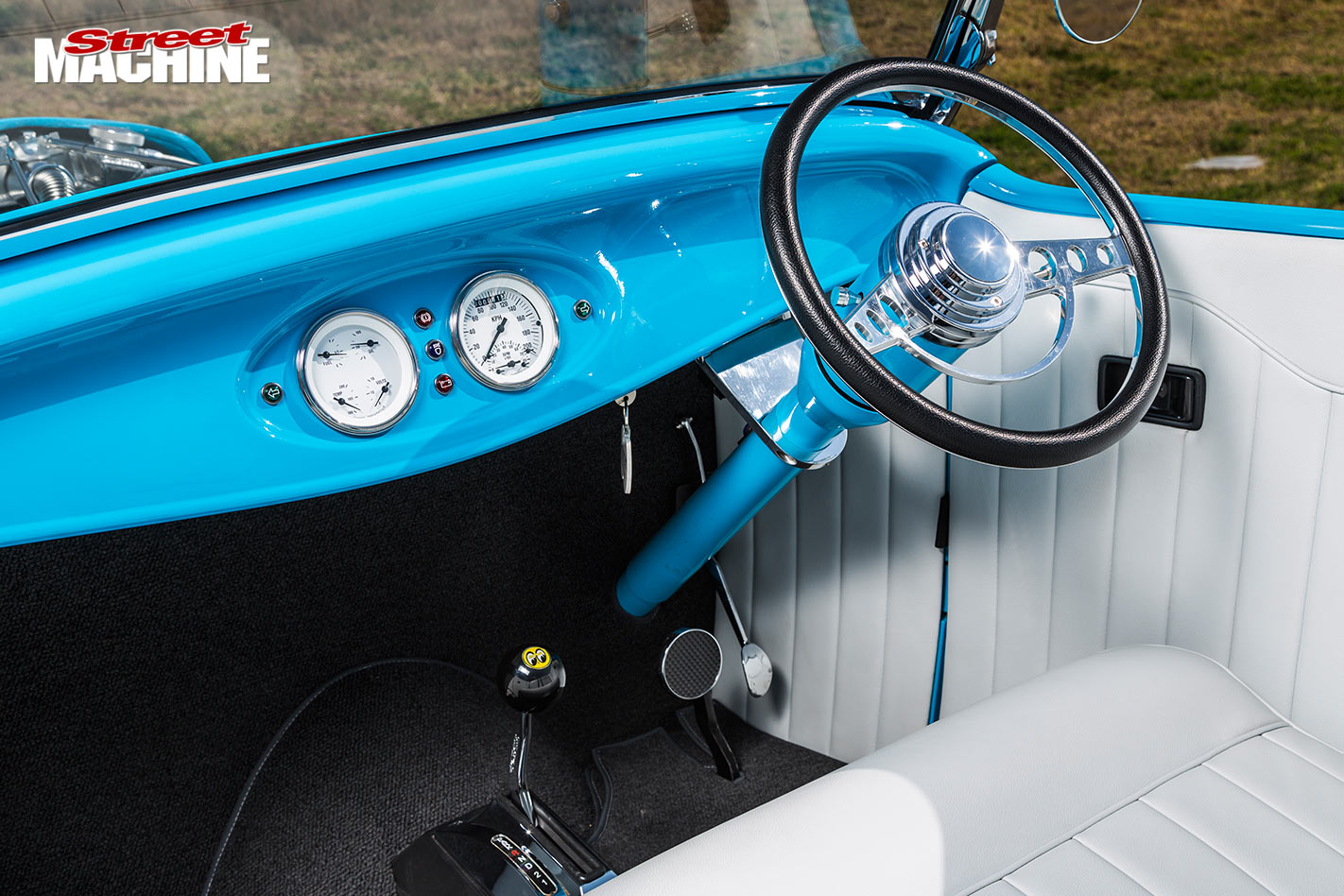 “The car took just over one year to build,” Richard says. “Brad, Joe, Charlie and myself did all the wiring, all running and hidden inside the chassis; it all came together nicely and worked first go. According to our wives, we probably could have built it in six months if we didn’t stand there looking at it so much and talking about how good it looked; once we put it back together, there were plenty of nights spent just looking and admiring! We had some great laughs and late nights, although my wife Adeline is happy the garage is finally clean again and my sister-in-law can now stop making all the boys lunch.” 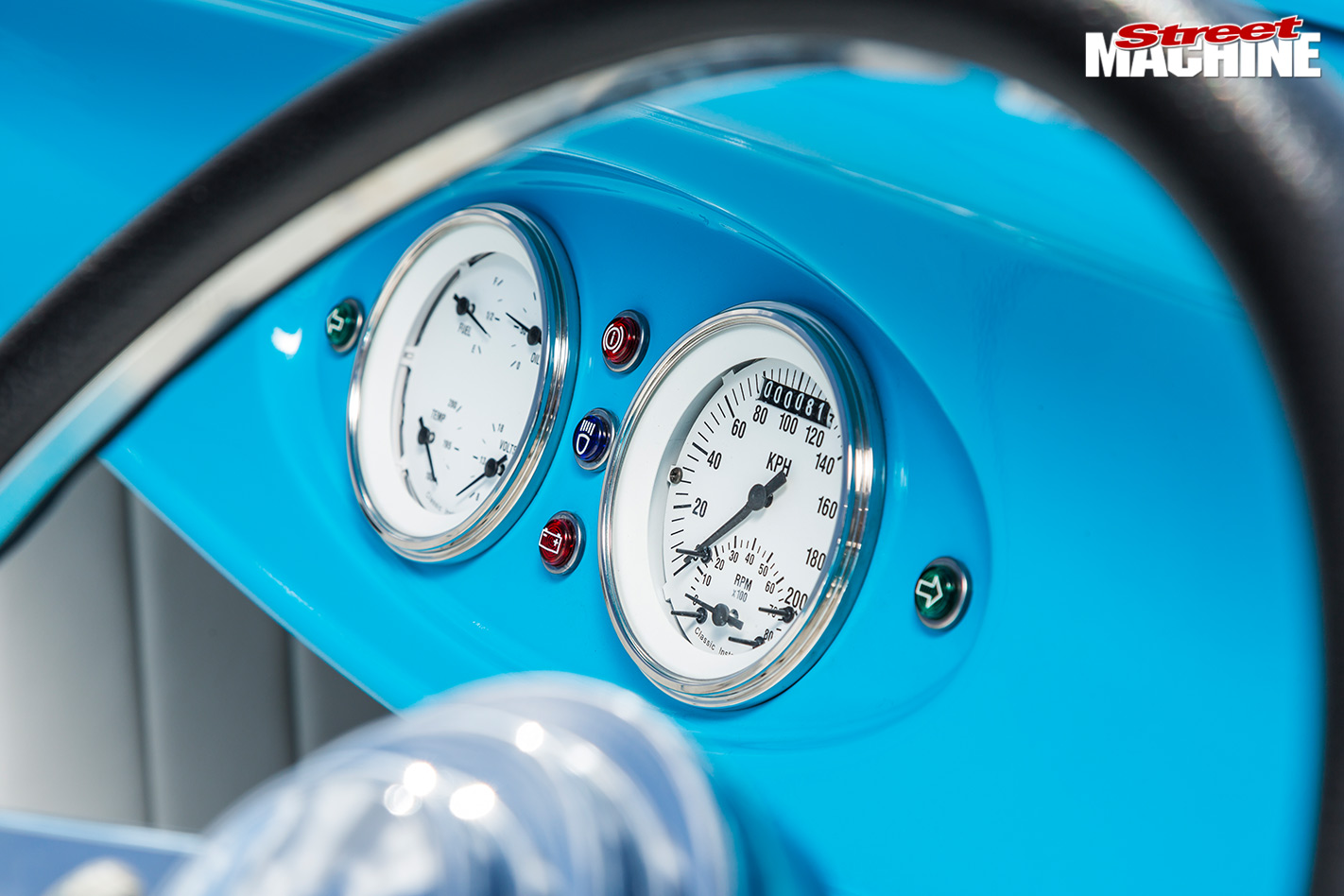 Although built purely as a cruiser, 32 COOL debuted at MotorEx 2015 on the NSW Streeters stand. “It turned out better than we thought and got more attention than I expected,” Richard says. “It was done on a very strict budget; wherever we could save a dollar or two, we did. Total build cost was $47,000, less than half what it would cost to have someone else build it, and that’s with every single part brand new. This was also my first build using the internet, which took months off the time; if you need something, you just go online and get it. If you wake up at two in the morning, you can source information or buy parts. And it allows you to compare prices, which makes it better on the wallet as well.”

So how does it go? 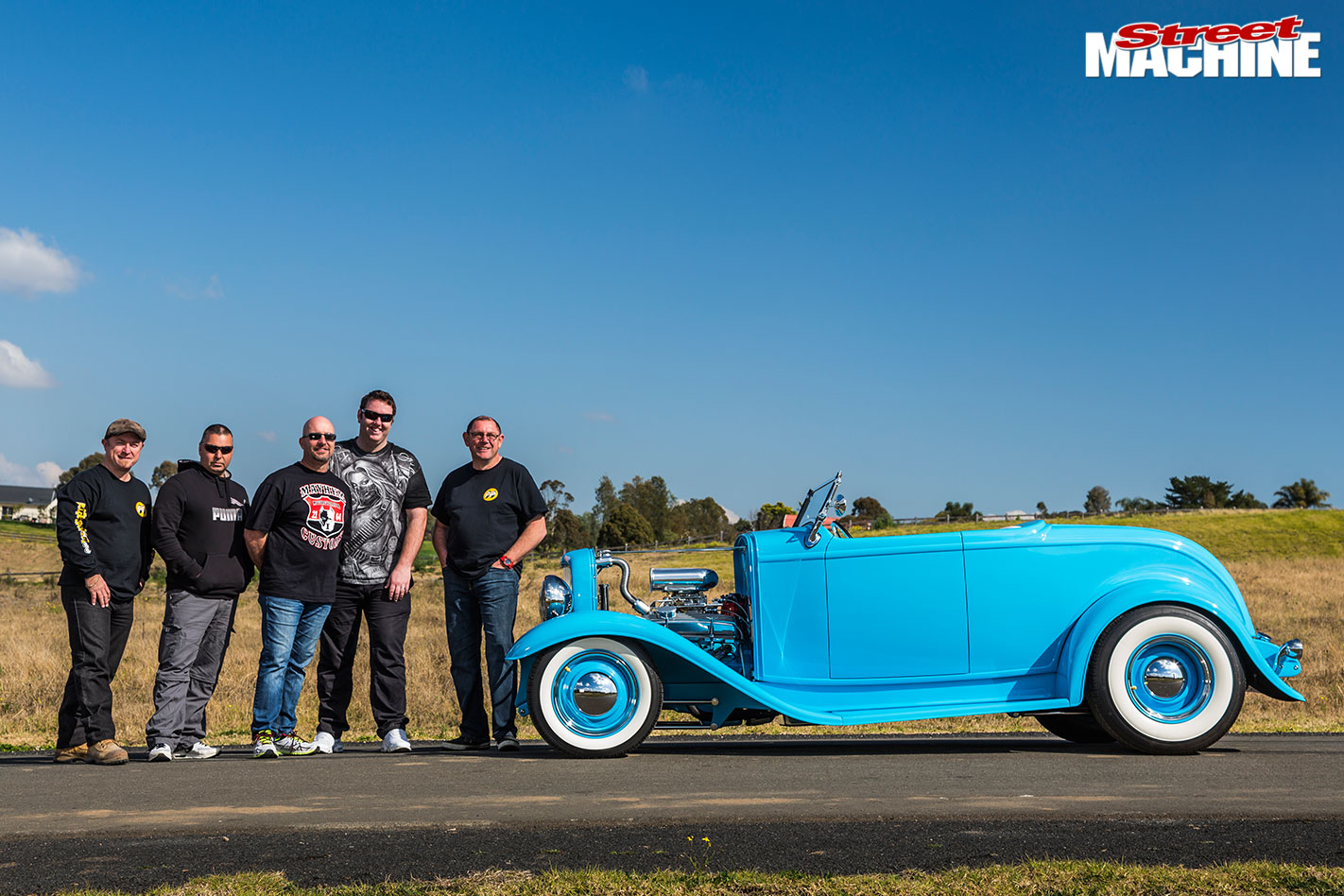 From left to right: Darren, Joe, Charlie, Brad and Richard

“This is my first I-beam car, as I wanted to keep it old-school,” he says. “I figured how it drives is how it drives, but there are no rattles, no shakes, nothing. Pedders at Taren Point do a lot of hot rods and set up the wheel alignment. It’s going through rego right now but I had a couple of runs at the Nostalgia Drags in Sydney and it ran perfectly straight; the officials called me Captain Casual and told me to keep my elbow inside the car!

“The rod was built by five mates in two garages, but what an outcome! I can’t thank my family and friends enough, and can’t wait to hit the road and do some cruising.” 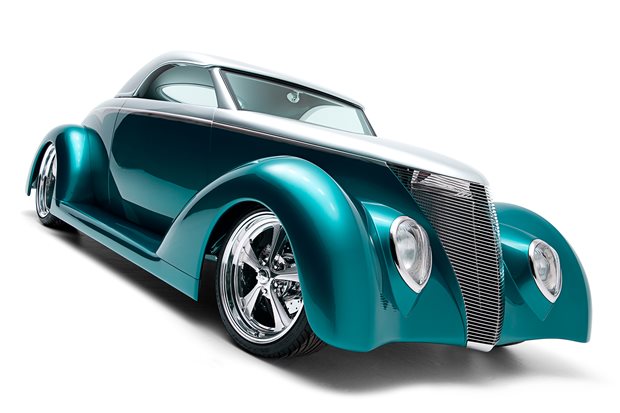 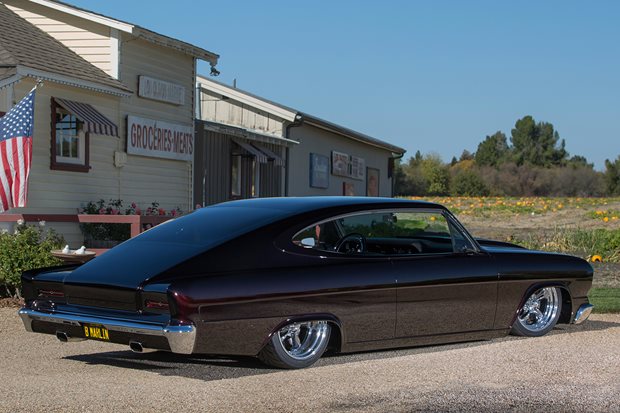