YOU only have to look at the sheer number of late-model Holdens running around with a Chevy bowtie on the grille or bootlid to know that, in this country, Chevrolet input equals good times. Don’t get us wrong; the Australian-designed and built V8s, in any of their capacities and tunes, have served this wide, brown land well. They’ve taken us on holidays, to work, they’ve won Bathurst and they’ve flown the V8 flag when no other local manufacturer seemed to be bothered with folks like us. But when it comes to some of Holden’s greatest models over the years, the common denominator has been a Chevy lump under the lid.

It all started, of course, with the Chev 307 in the new-for-1968 HK Holden and the mighty Corvette-spec 327 in the Bathurst-tackling (and winning) HK Monaro GTS. Move up to the HT Holden and the GTS likewise moved up to the legendary 350 Chev small-block. Hell, even the HQ could be had with a 350 Chev, and it’s those rare survivors in 2017 that are bringing the big money at collector auctions. 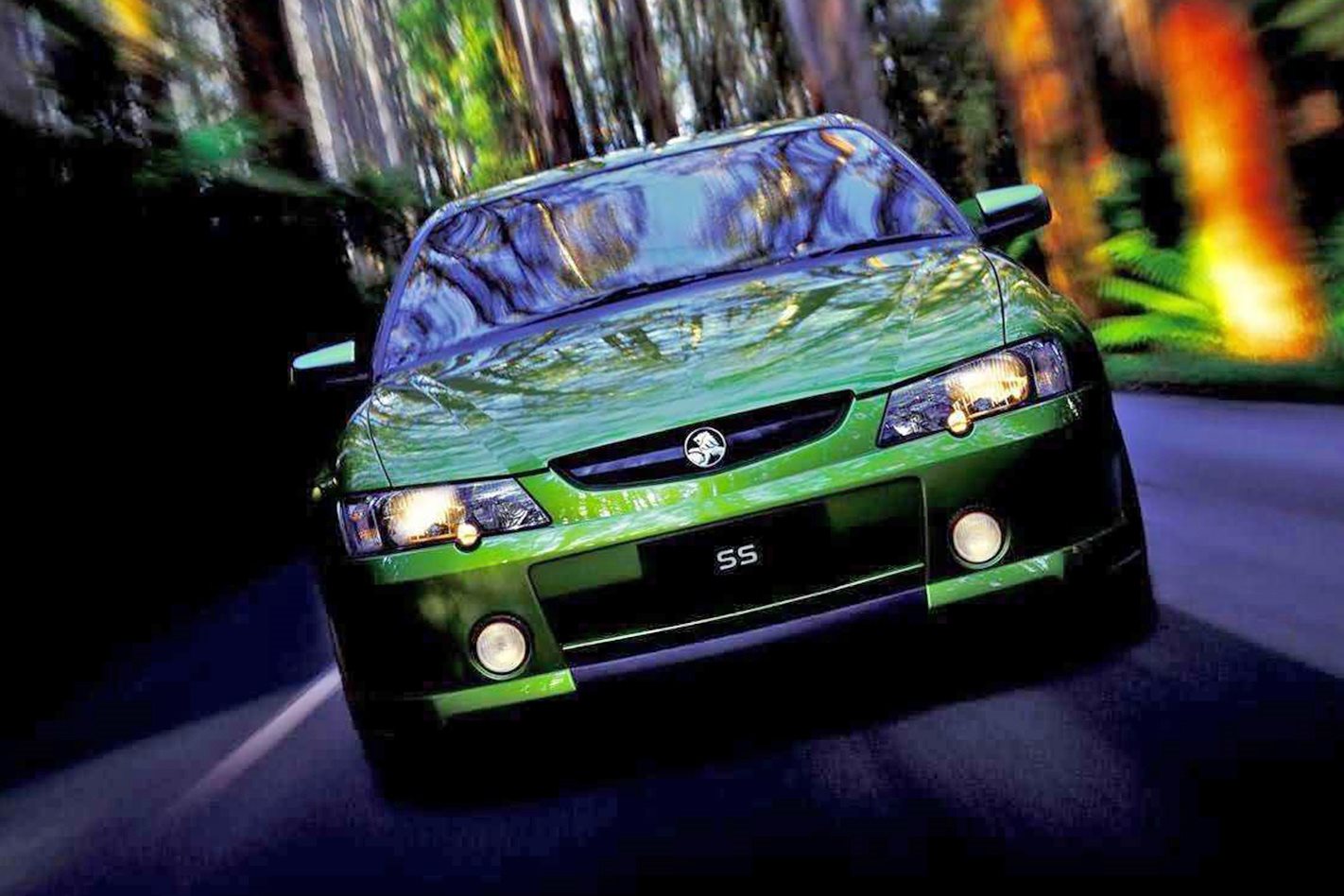 Which kind of explains why, in 1999, when Holden upgraded the mega-popular VT Commodore to Series II specification, we all suddenly went Chevy mad once again. The first VT saw the last of the local 5.0-litre Iron Lions fitted, and, while it was a great engine by then, with a roller camshaft and sequential injection, the extra bulk of the hefty VT seemed to be asking just a bit too much of a mill that was first seen back in 1969. What’s more, Holden had figured out it could get its hands on the Mexican-built Gen III V8 (LS1 to most of us) and improve pretty much every aspect of the VT. And that’s how the VT Series II Commodore SS became the huge success it was, and why Holden is still (though for a limited time only) powering its SS Commies with LS-family V8s.

Those early LS1s weren’t perfect, but they were impressive in many ways. They used less fuel than a Holden 5.0-litre (on the highway at least) and they made a lot more grunt. Weird-sounding firing order aside, you just couldn’t argue with the efficiency numbers. And within weeks, anybody who’d bought a VT Series I SS was looking at the poor relation in the driveway each morning. 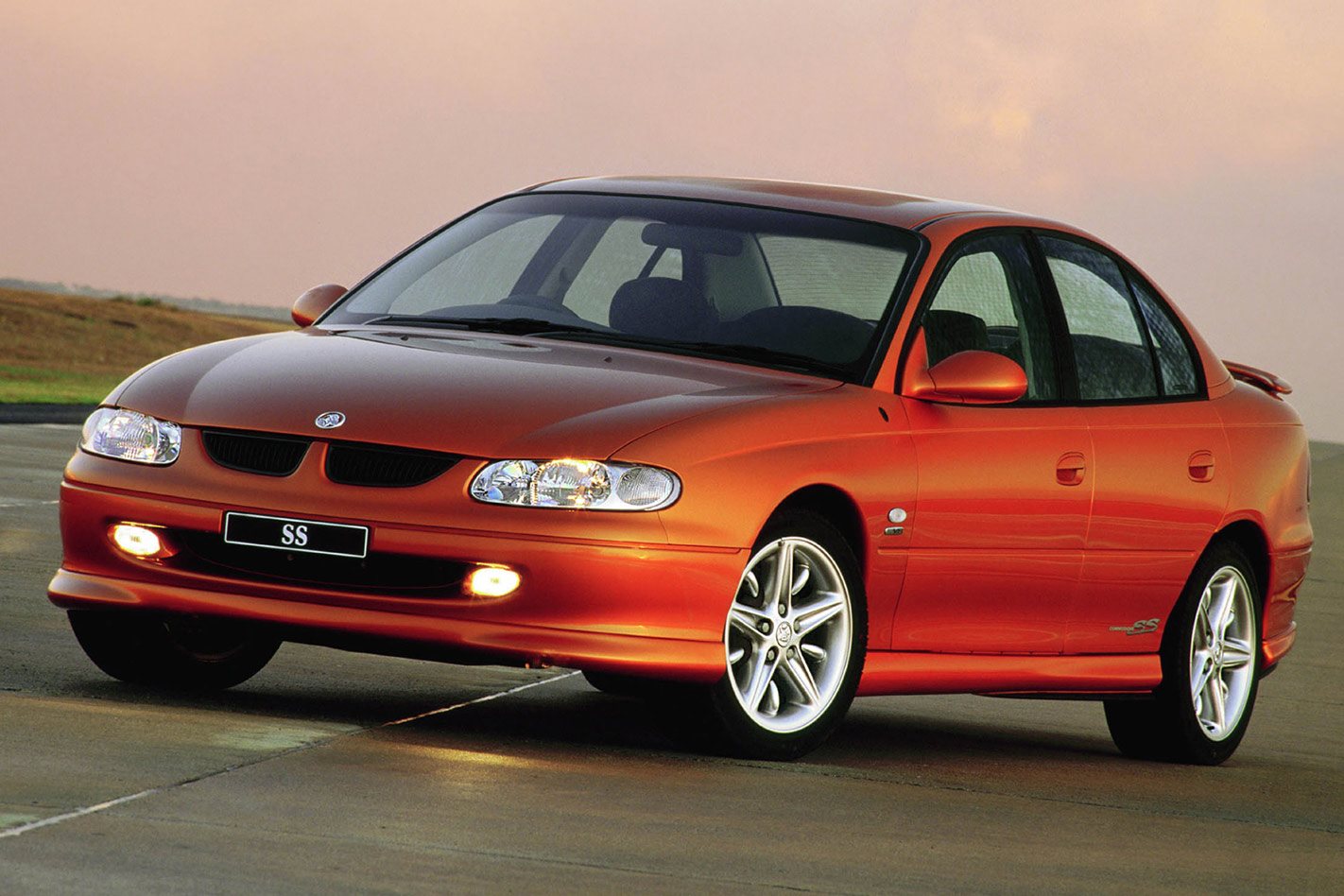 As good as the VT Commodore SS was (and it was very good), a kerb weight the wrong side of 1600kg was just too much for the old 5.0-litre Holden V8 to easily cope with. In a Calais or Berlina, where outright poke wasn’t the issue, the Iron Lion was fine. But the SS was all about getting moving quickly. Enter the LS1, a whole new breed of V8 engines from Chevy that replaced the old but legendary small-block. And while the LS1 and its LT1 predecessor might look roughly the same size, there’s pretty much no commonality apart from the rod bearings.

The LS1’s big advance was that it was made from aluminium (there was a cast-iron version for the truck market). And thanks to detail stuff like using the sump as a stressed member and a cross-bolted, six-bolt-main bottom end, the LS1 was super-strong. Check out the hundreds of limiter-bashing videos on YouTube and you’ll see what we mean. Meanwhile, it was still a pushrod design (which was fine by us) and used coil-packs instead of a dizzy and flat-top slugs. 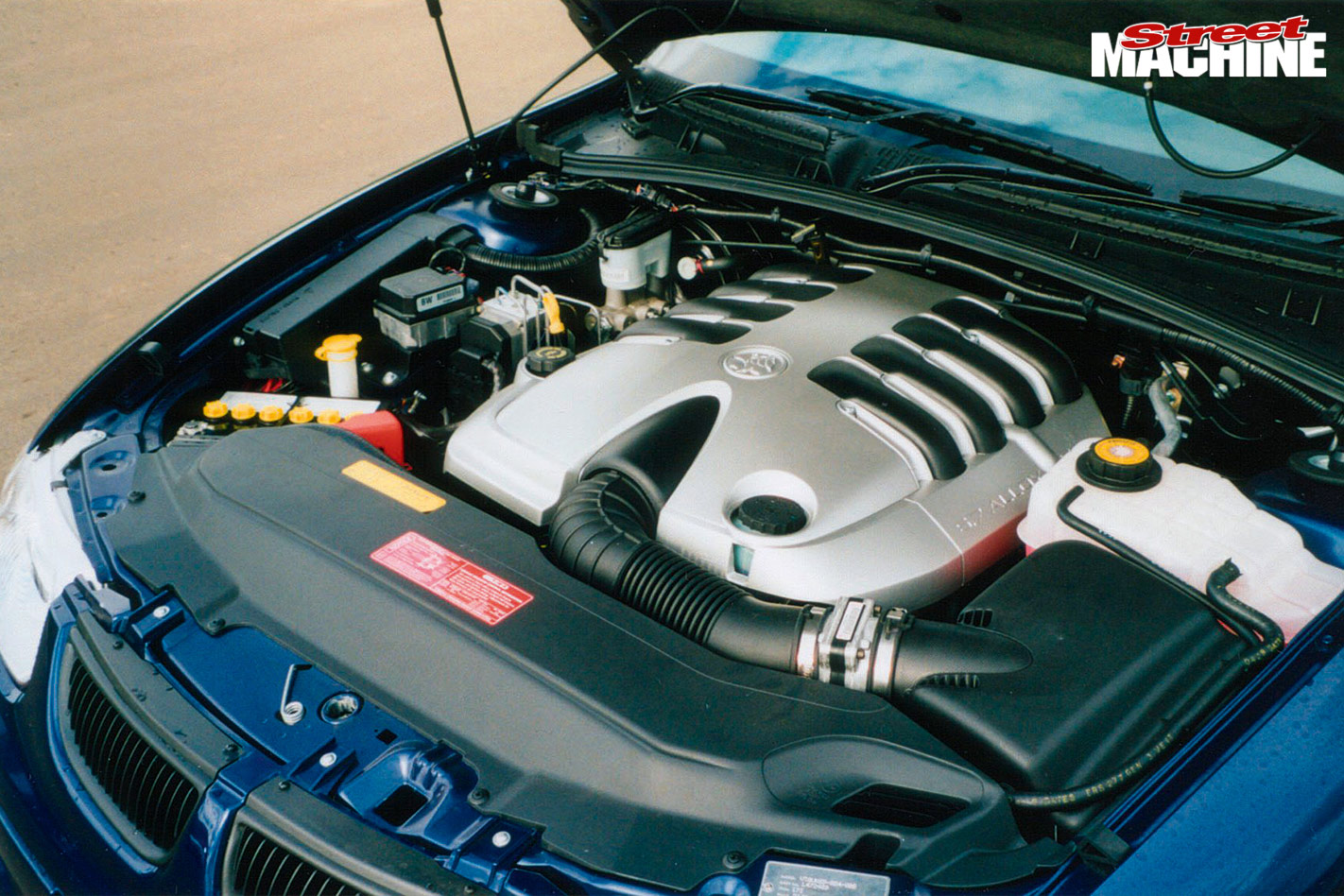 So the Series II VT SS should have been an overnight sensation, right? Well, not exactly. It was certainly welcomed with open arms, but a few problems cropped up early in its life. Some were all about design, others were quality related. We’ll get to those later.

The design dramas amounted to the LS1’s huge intake ports (known as cathedral ports, ’cos they look like a church window), which killed air-speed at low revs. Suddenly, after decades of Holden V8s with lots of grunt off idle, you had to rev your SS up to get it travelling. Also, the gearing Holden chose was way too tall, giving the SS six-speed manual 100km/h at just 1500rpm and killing top-gear flexibility. The 220kW advertised for the new engine was all well and good, but it didn’t actually feel that fast. Oh sure, it still sent a 5.0-litre VT SS packing, but it wasn’t a traditional V8 in the way it made its grunt. 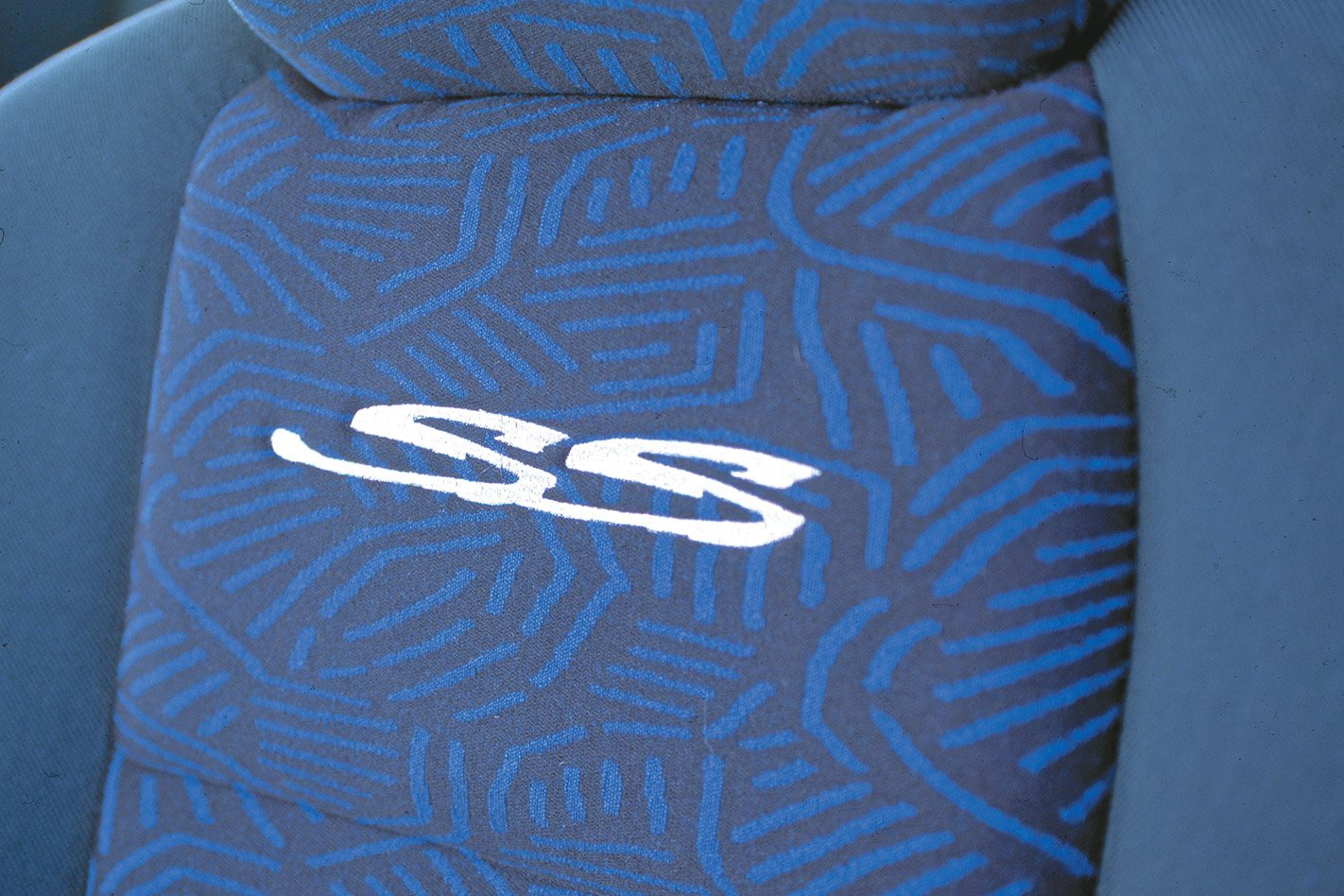 But if you scored a good one and learned how to drive it, a VT SS with the LS1 was a pretty good thing. The independent rear end was now under all Commodore sedans and wagons and gave the SS some decent squat and power-down. But you did need to watch out for strange rear-tyre wear, particularly in cars that towed or were driven with a full load on board. The manual was good, but the four-speed automatic suited more buyers more of the time. 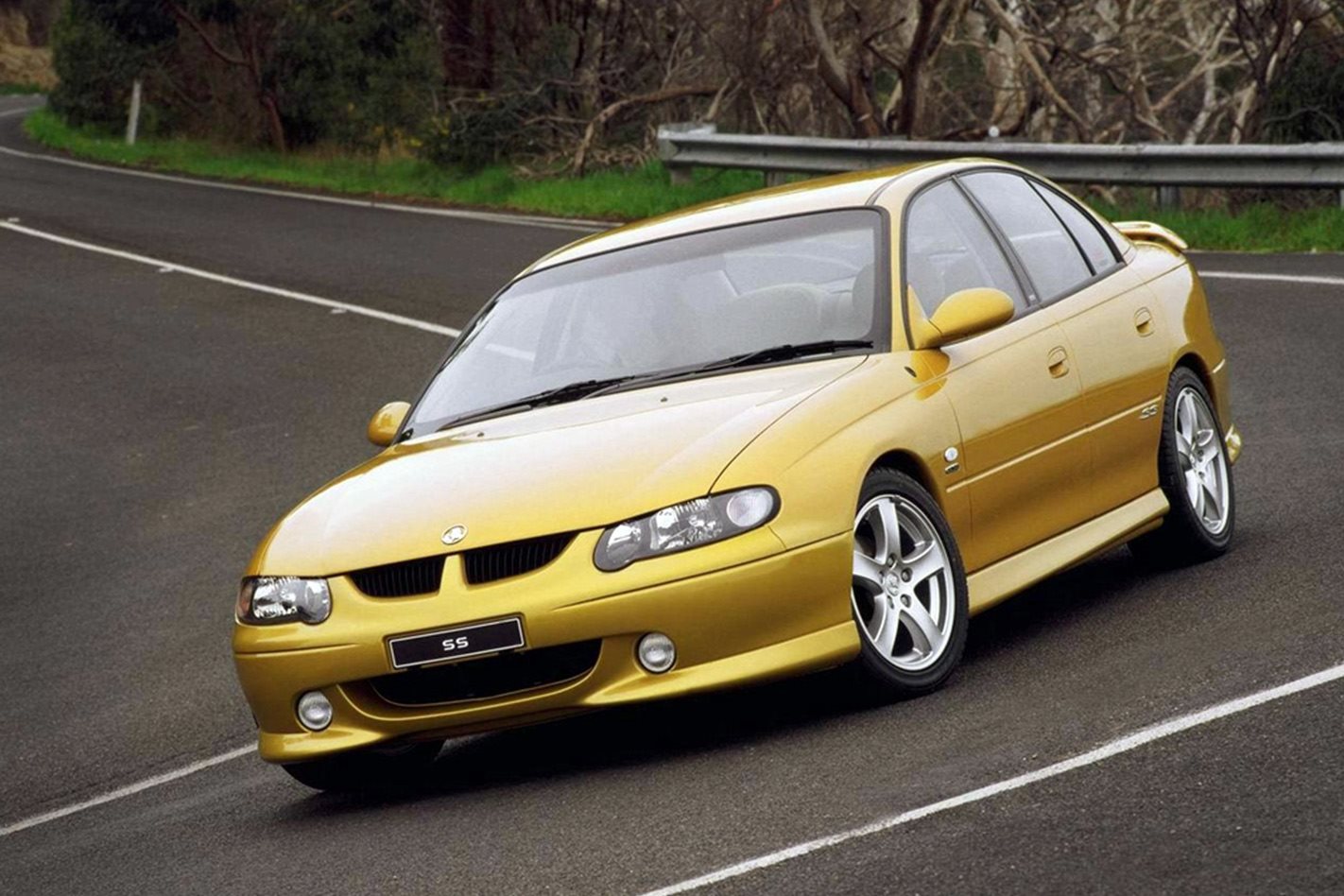 Holden took the opportunity of the facelift to VX to give the SS a fraction more power, bumping the peak output from the original 220kW to 225. There were no mechanical changes in that process, just a slightly different tune in the ECU. Could the improvement be felt? Not really.

But Holden had finally figured out how to make traction control work on manual-transmission Commodores, so the SS adopted that feature, as well as a passenger’s airbag becoming standard. If you wanted side airbags, you were up for extra. And while a percentage of VX SS cars getting around now have leather seats, that wasn’t standard, so you might have to shop around for that option when buying second-hand. There was also an SS version of the ute, too, with the utility now based off the new VT/VX architecture rather than the old VS Holden platform that had soldiered on years after the VS sedans. 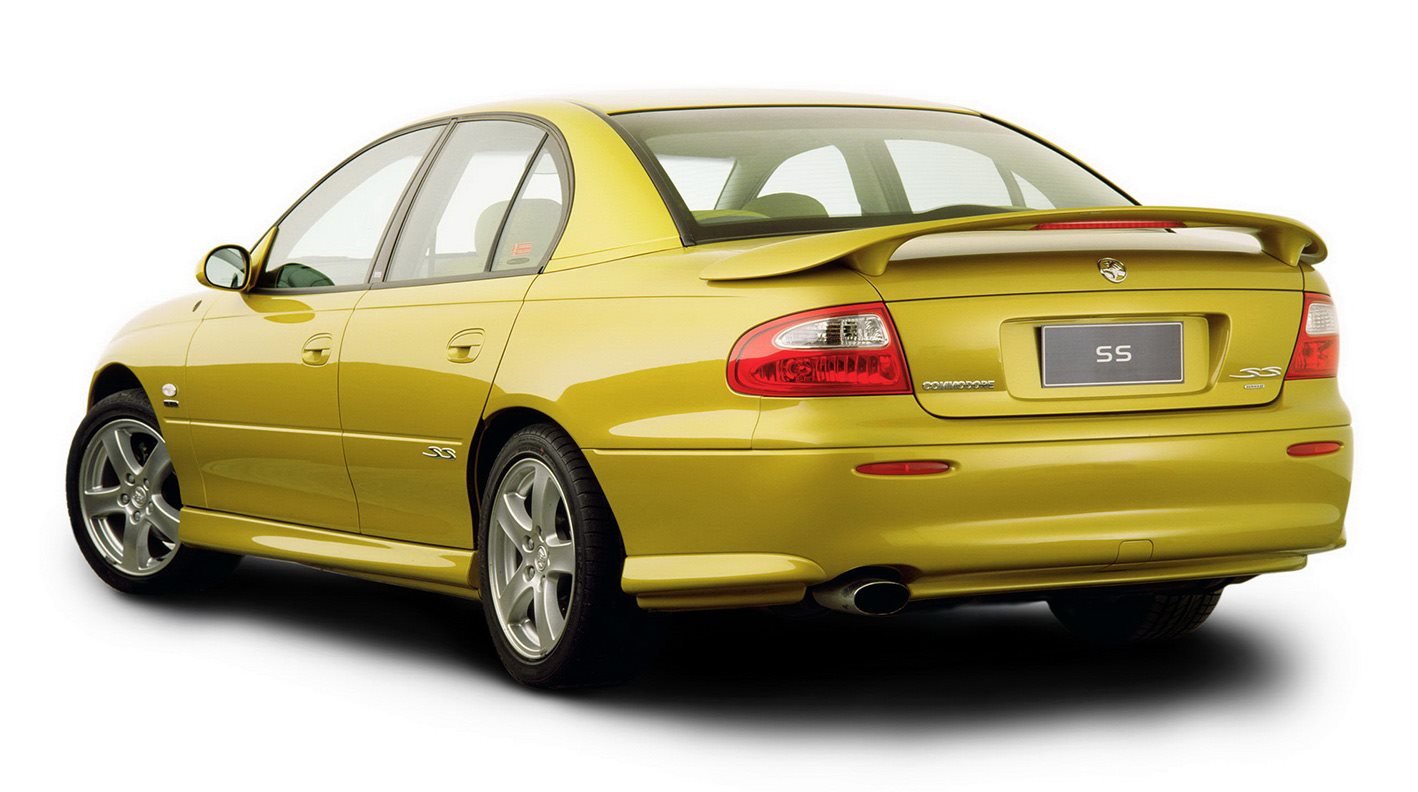 The VX Series II upgrade was bigger news, with an extra toe-control linkage incorporated into the rear suspension as well as revised suspension bushes. Suddenly, the SS was a nicer handler and steered more logically, and didn’t eat its own rear tyres into the bargain. 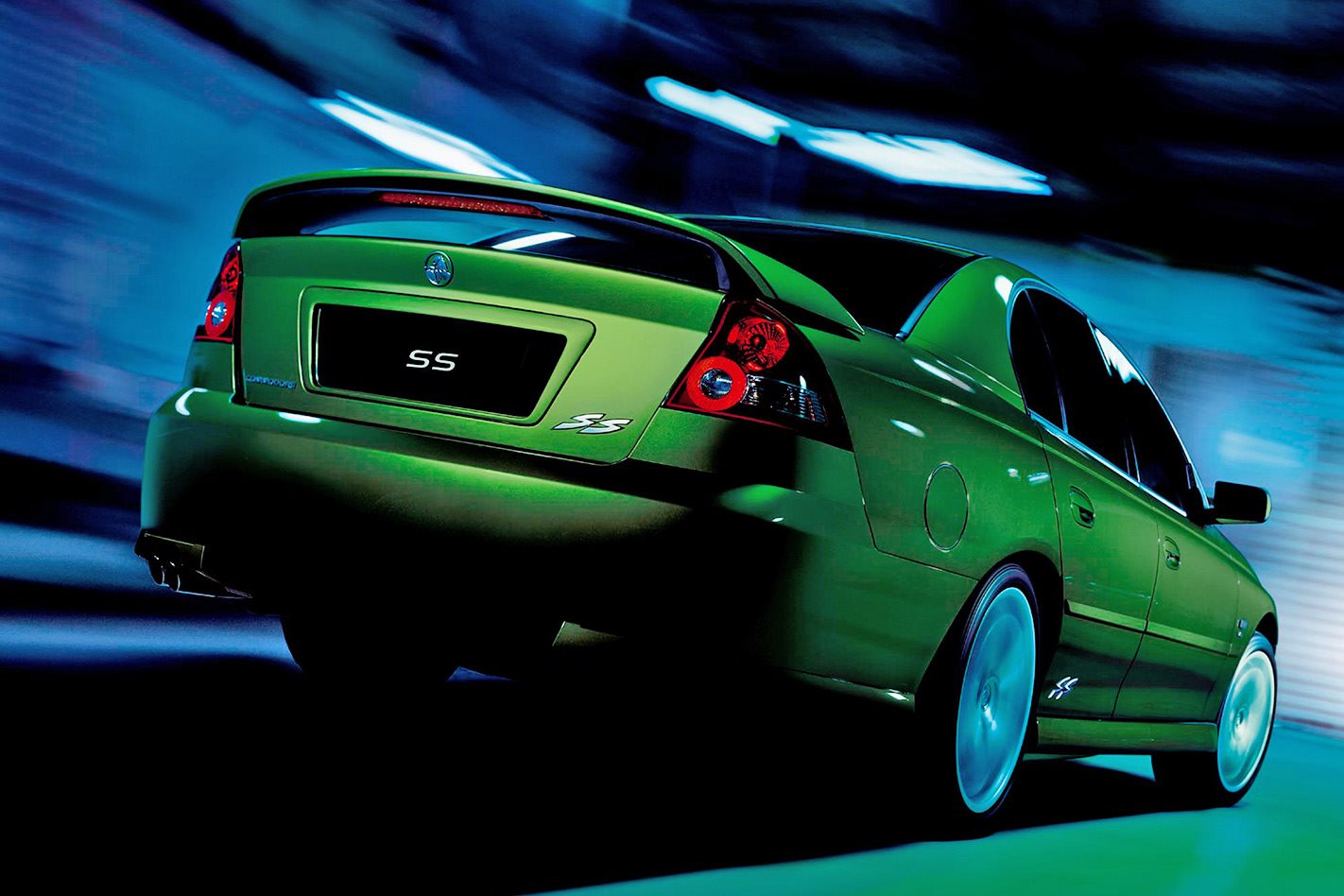 The VY upgrade marked the first real visual changes from the original VT. The SS followed suit with a new front and rear light-and-apron treatment that kind of sharpened the look, without (to most people) either ruining or radically improving the appearance. There was a new interior, too, with a more modern-looking dashboard that ditched the organic curves for a more formal layout. 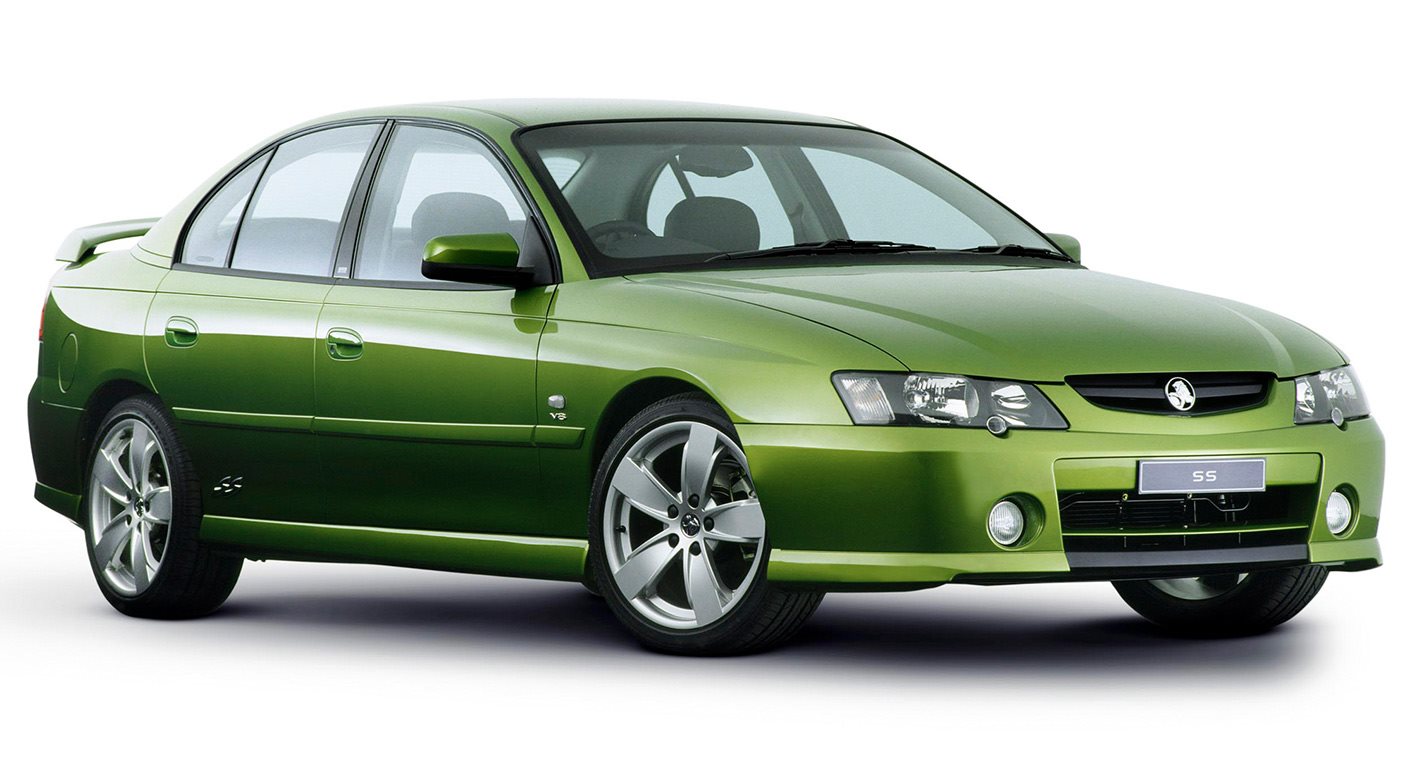 Power jumped again, this time to 235kW, and the SS sedan got a new bodykit to go with the new exterior. The joker in the pack was a new model in the line-up. The SS station wagon was just what a lot of buyers had been waiting for, and with the same 235kW as the sedan, it was a kind of cult car at the time. You traded off the sedan’s 18-inch alloys for 17s, but you still got FE2 suspension. The wagon was a limited-run thing, with 500 Series I versions produced and just 350 Series IIs, so they’re a pretty rare bird now. 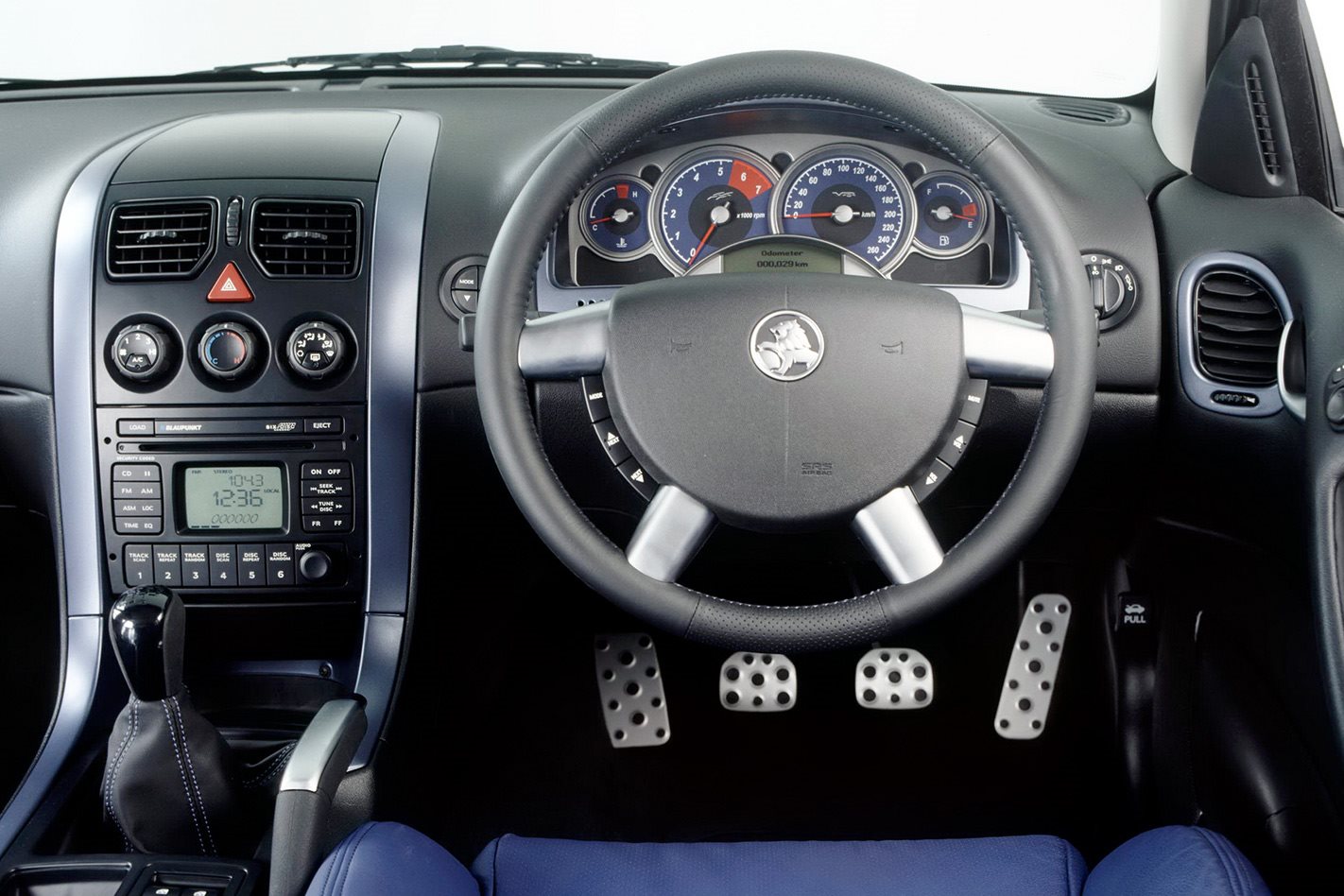 The VY range also gave us the SV8, basically an Executive povo-pack with the V8 engine. It was cheap and cheerful and is a good alternative if the budget doesn’t run to the full-fat SS. For the Series II update, Holden threw an extra 10kW into the mix for a grand total of 245. 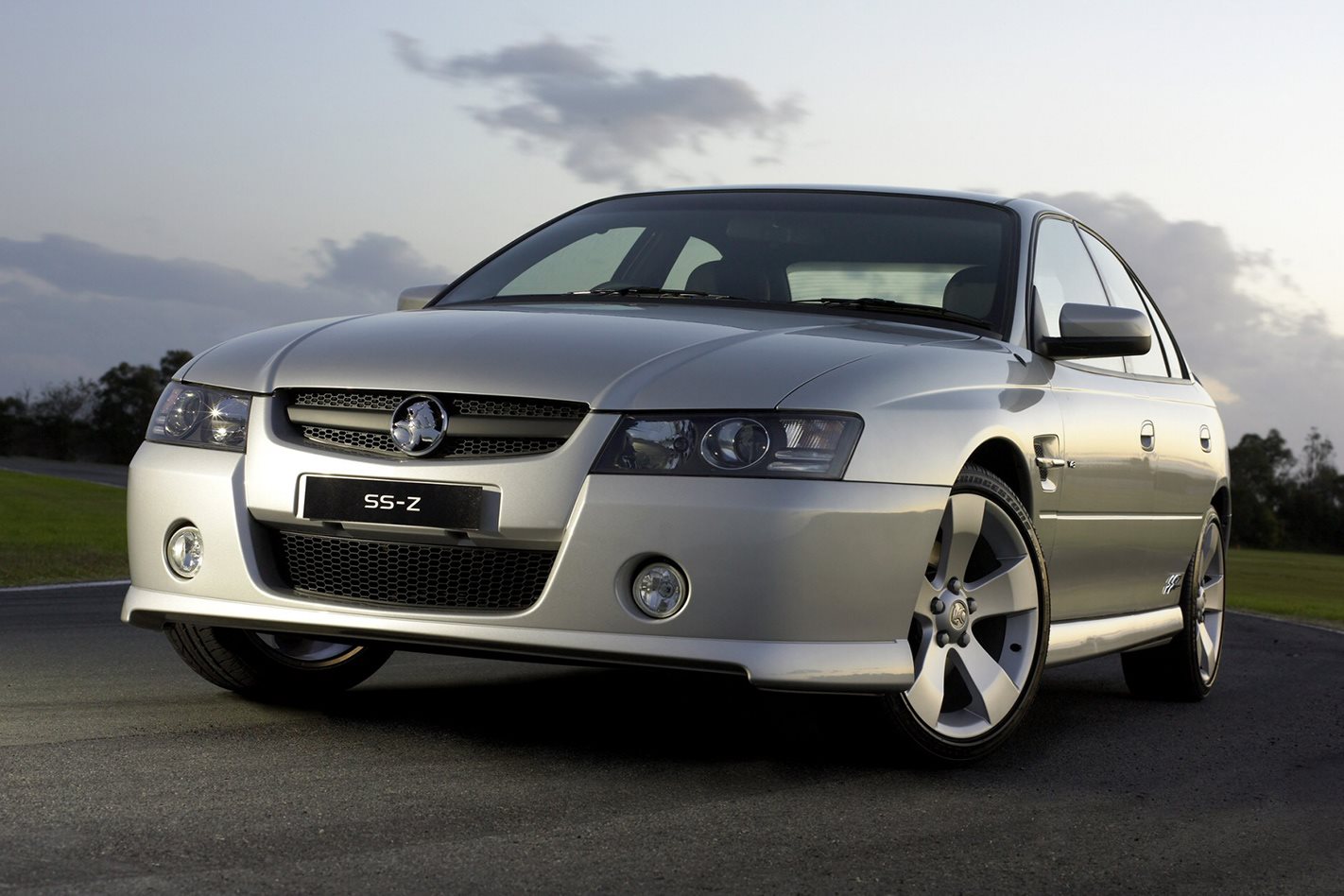 A minor facelift to look at, the move to the VZ model was still automotive news. And even though Holden used the VZ to move its bread-and-butter cars to the new alloy V6, the SS model continued to sell strongly even with the SV8 for company. The SS wagon disappeared from price lists at the same time. Power for the LS1 was now a full 250kW. 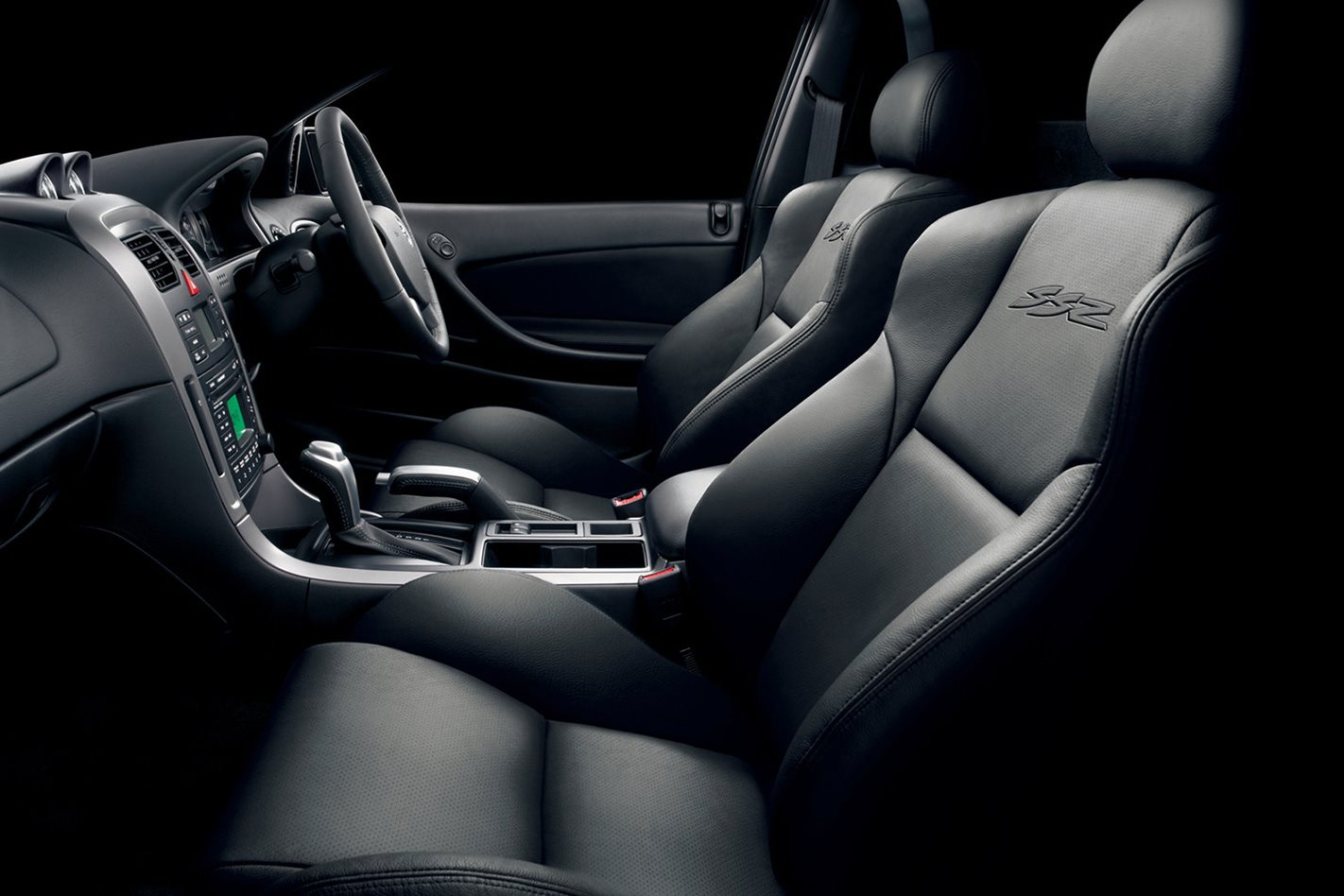 Interestingly, Holden didn’t announce an official Series II update for the VZ, but instead rolled out a few changes at the start of 2006, just before the all-new VE Commodore lobbed. Of most interest there was the MY06 version of the SS, which suddenly got the 6.0-litre V8 that would make the VE SS such a success in a few short months. Power was now 260kW, but the 6.0-litre was torquier down low than the 5.7 and these jiggers are really sought-after. They’re rare, too, since production lasted only a handful of months.

Like any LS1-powered Holden, you need to make sure the one you’re looking at isn’t one of those with a Monday engine. To be fair, the really early engines seemed to give the most trouble, and by the time Holden was into late-VX, early-VY production, the gremlins had largely been sorted. Better build quality at the Mexican factory and improvements to crankcase ventilation were the keys to the improvements. Doesn’t mean a few iffy ones didn’t still slip through, though, so a compression test and close inspection doesn’t go astray.

The common problems centre around engines that rattled from cold and some that burned oil. Some did both. The rattling seems to be the design and material of the piston, and doesn’t appear to affect the engine long term. But plenty of LS1s went to heaven when they ran out of oil between services. Holden did the right thing and rebuilt or replaced a lot of engines even out of warranty, and an LS1 that has been ‘fixed’ will often have an ‘X’ stamped in front of the engine number. 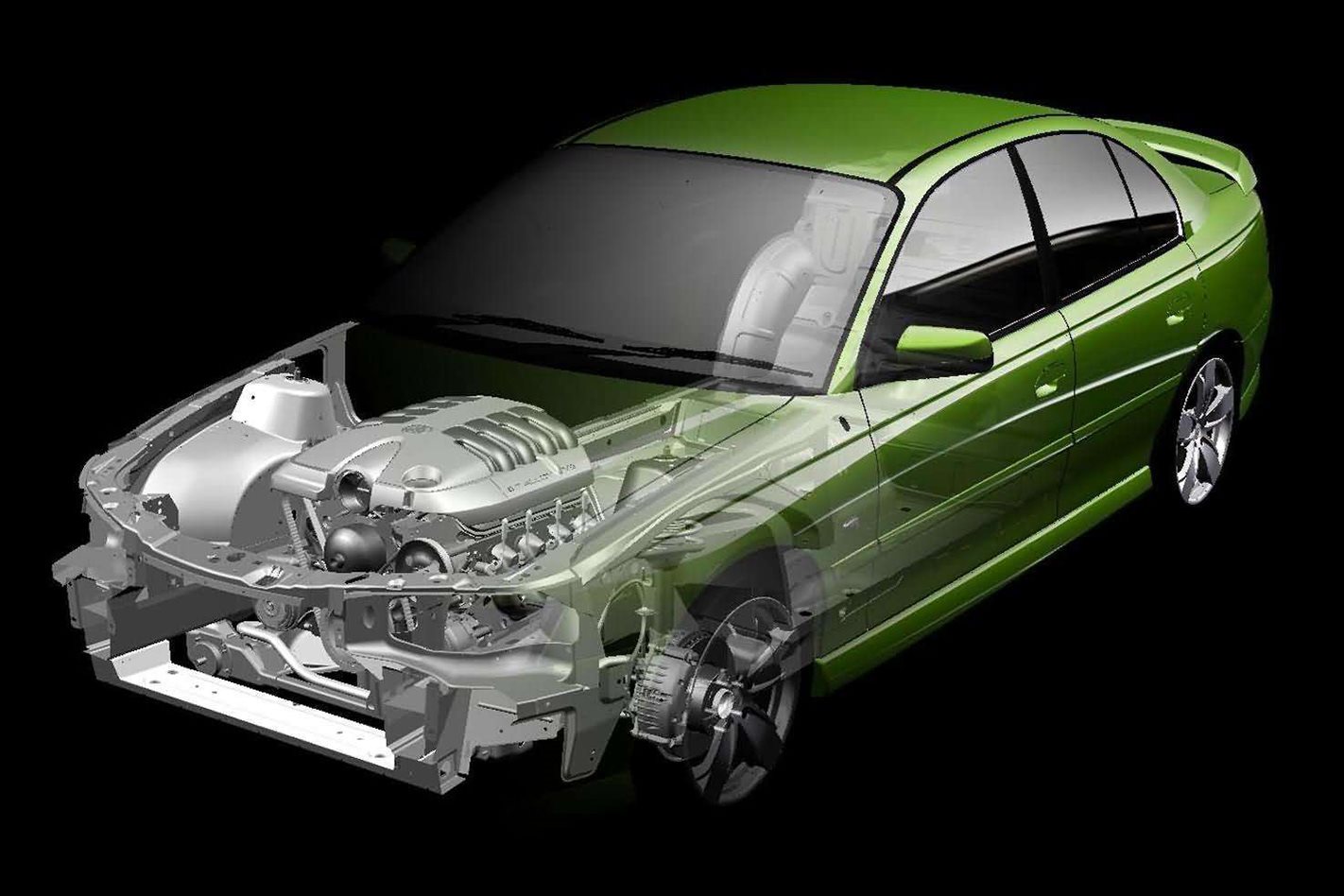 Some LS1s suffered sump bolts that loosened over time, leading to oil leaks, but the odd LS has chewed up its own rear-main seal, too, and that’s a much bigger fix as well as a roadworthy item. But for every leaky, rattly LS1 we’ve heard about, there are 100 out there that have covered 300,000km without any major hassles. The bottom end, in particular, is strong, with its six-bolt, cross-bolted mains and structural sump, and the number of LS1s with big pumps bolted on proves the point.

There are enough SS Commodores of this vintage out there that you can afford to avoid the ones with the Drift-King stickers, bald rear tyres and weird front-end geometry. Find one that has been serviced, loved and not messed with and go from there. The tuner world is full of clever people who can really make the LS1 sing, and the purchase price for an early one now represents huge value for money.

The one you really want is that elusive, late-build VZ with the 6.0-litre engine, but most people who own them know exactly what they’ve got and will be asking drug-money.