Cara used to drive an R34 Skyline, but today's she's kicking arse in something much cooler

I FIRST met Cara Bertoli at the 2007 Adelaide Gazzanats, where she rocked up in her R34 Skyline ready for her firstever go-to-whoa. Later, a change of workplace to Holden in Elizabeth altered her automotive palate, while her extracurricular activity became centred around drag racing. What she’s endured in the pursuit of quick times would be enough to have most packing up their bat and ball, yet Cara just gets on with it, returning more determined than ever. 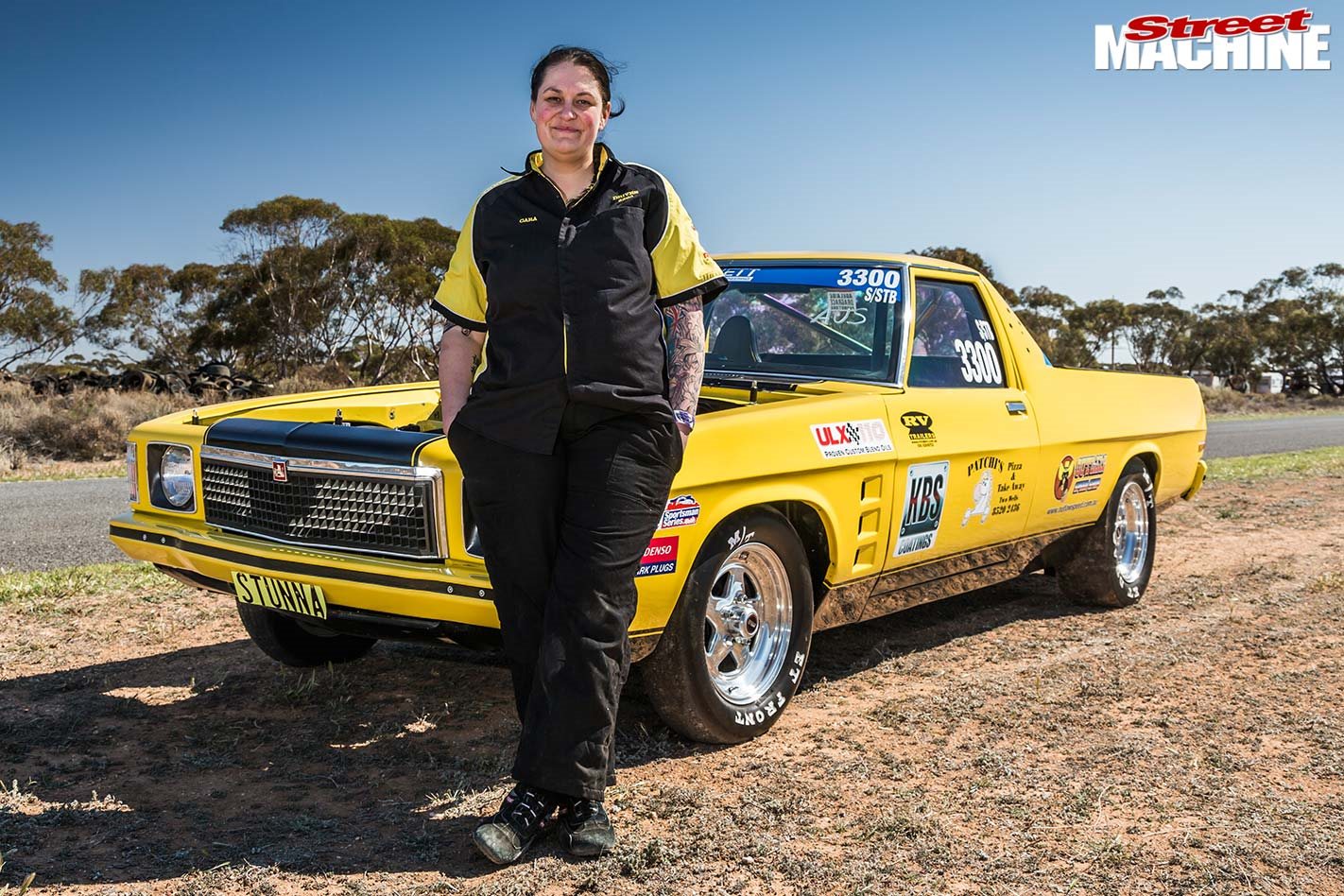 When did you get Yellow, your HZ ute?

I bought her late in 2011 as a $500 roller off Gumtree, after writing off my previous car while towing to a meet. I had a few different ideas but decided on building a Super Street car with an aim for mid-to-high 11s, though with extra safety equipment so that if I want to go faster later on, I can. 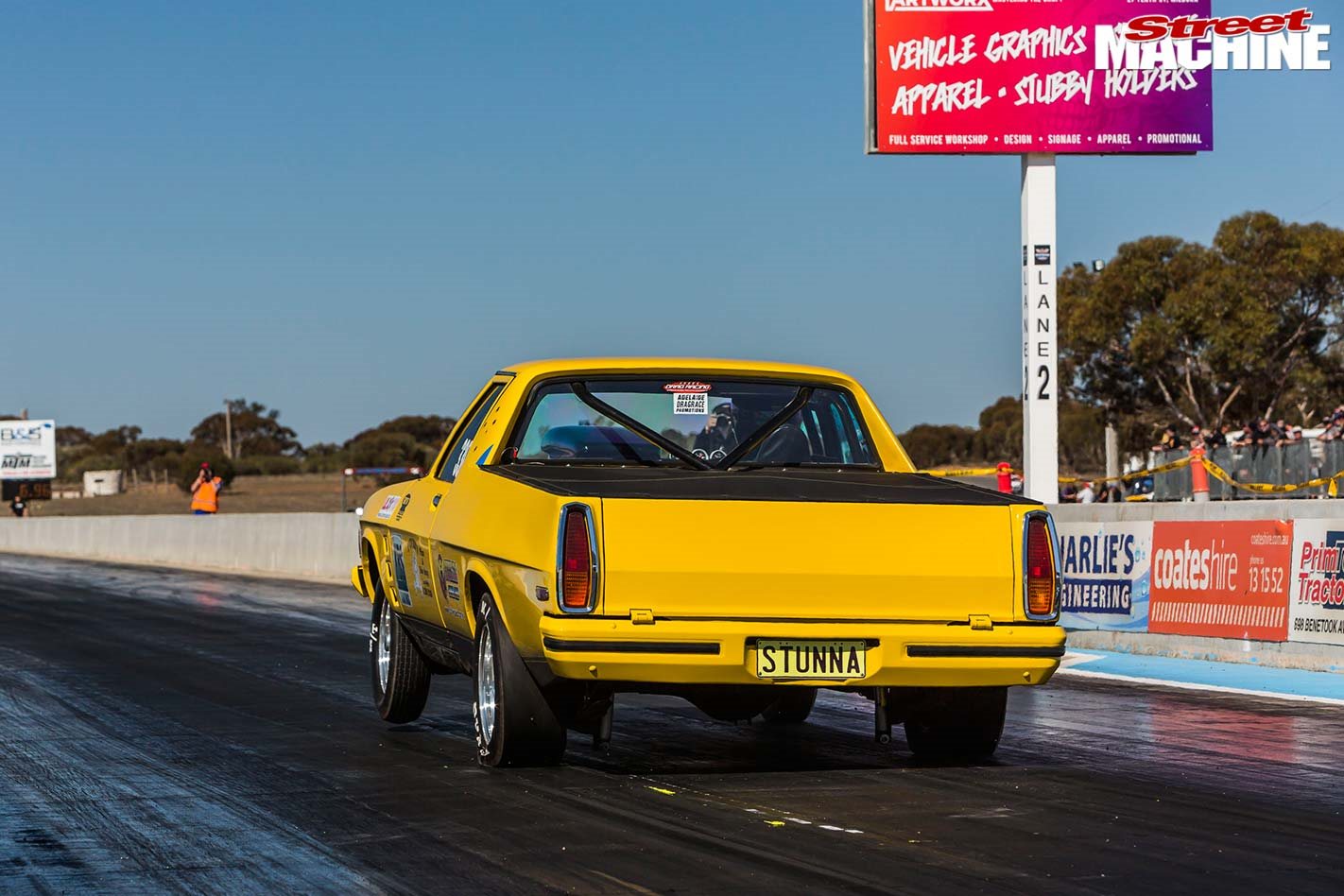 When was Yellow finished?

In September 2016, which was also my first meet since hitting the wall in my MkII Cortina drag car a year or so earlier. I was really scared on that first run and did a 21-second quarter-mile, ha ha! By January I was running 11s. 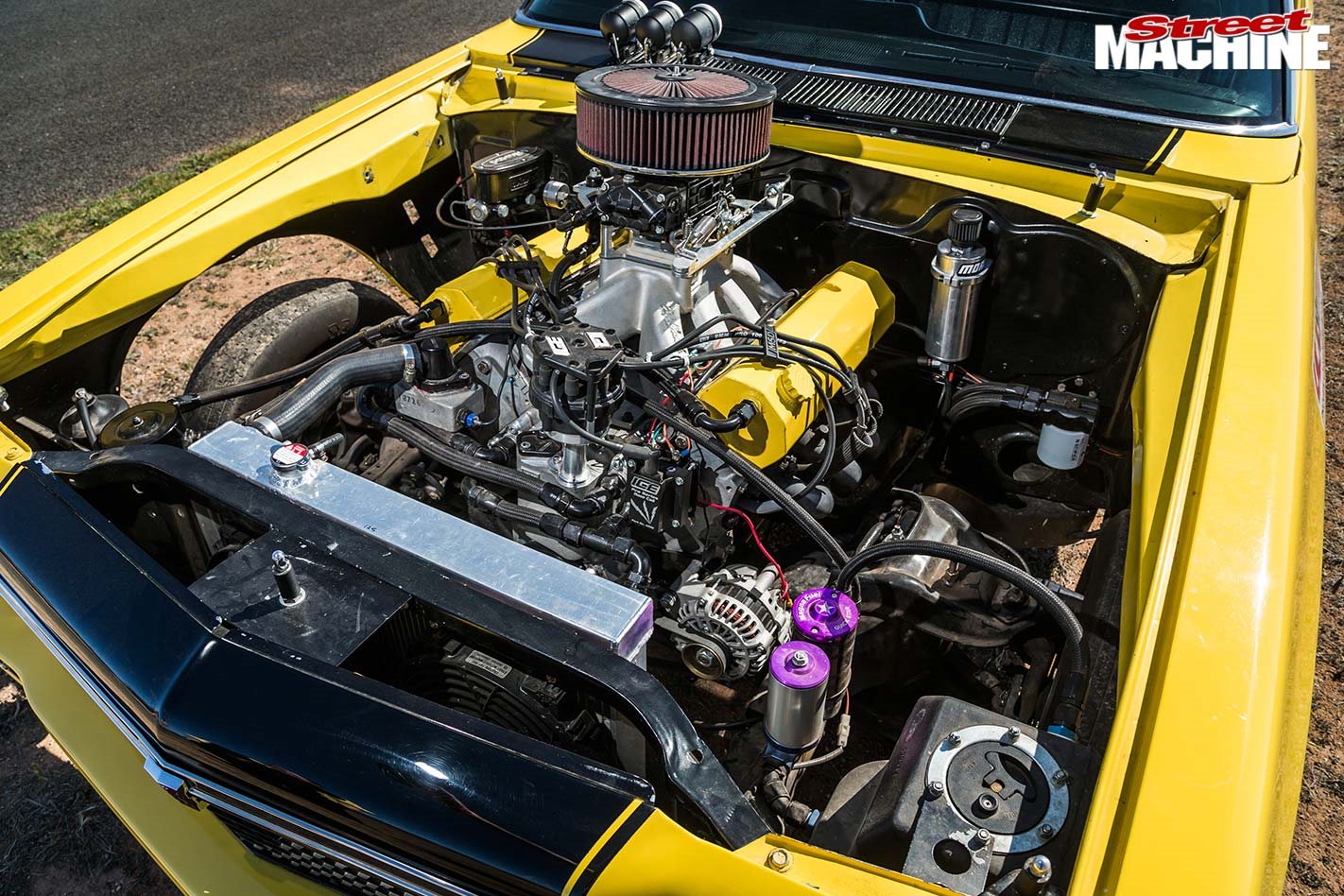 An LS1 converted to a Quick Fuel 950 carby with a dizzy and ICE ignition. It’s a pretty basic engine that I built myself with my friend Mark and my partner Brad. The first motor was built by someone else and it didn’t last a full 12 months! So, by building it myself at least I know it’s my fault if something stuffs up. Behind is a TH350, with a 4400-4500rpm Dominator stall and a nine-inch with 4.11s. It’s tubbed to the chassis rails to allow for height as the 26x9in slicks grow. 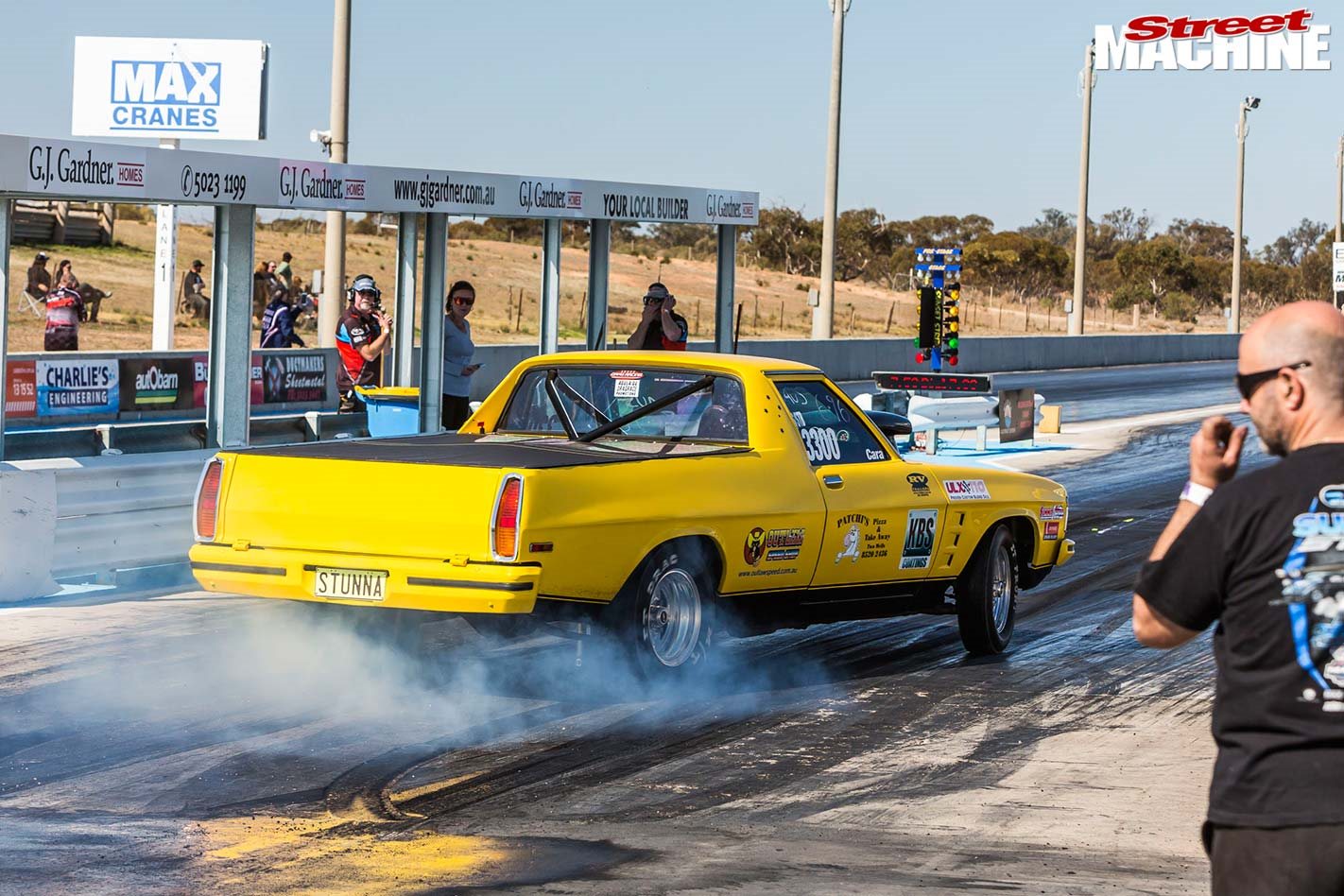 Cara had Yellow at the recent Mildura eighth-mile Nostalgia drags to test out the ute’s new trans and converter. “I had no idea what it’d do, so I just decided to send it and ran a 7.00 straight up,” she says. “My second qualifier was a 6.97 – a PB, so that was pretty cool. It’s nice to have a car that does what it’s meant to, and it was great to run a PB at a track that I’d first raced at”

You had a few issues last season?

There’s always something with Yellow! Every second meet it’d backfire and carry on. We kept chasing the gremlins – we fixed the ignition twice and the accelerator pump – but it killed my season. Then the trans let go! I was on the top end when the whole car locked up and went sideways followed by a big burning smell, so I shut it all down and launched myself out of the car. I ended up rebuilding the TH350 myself with Brad and my crew chief Dave. That was an experience! 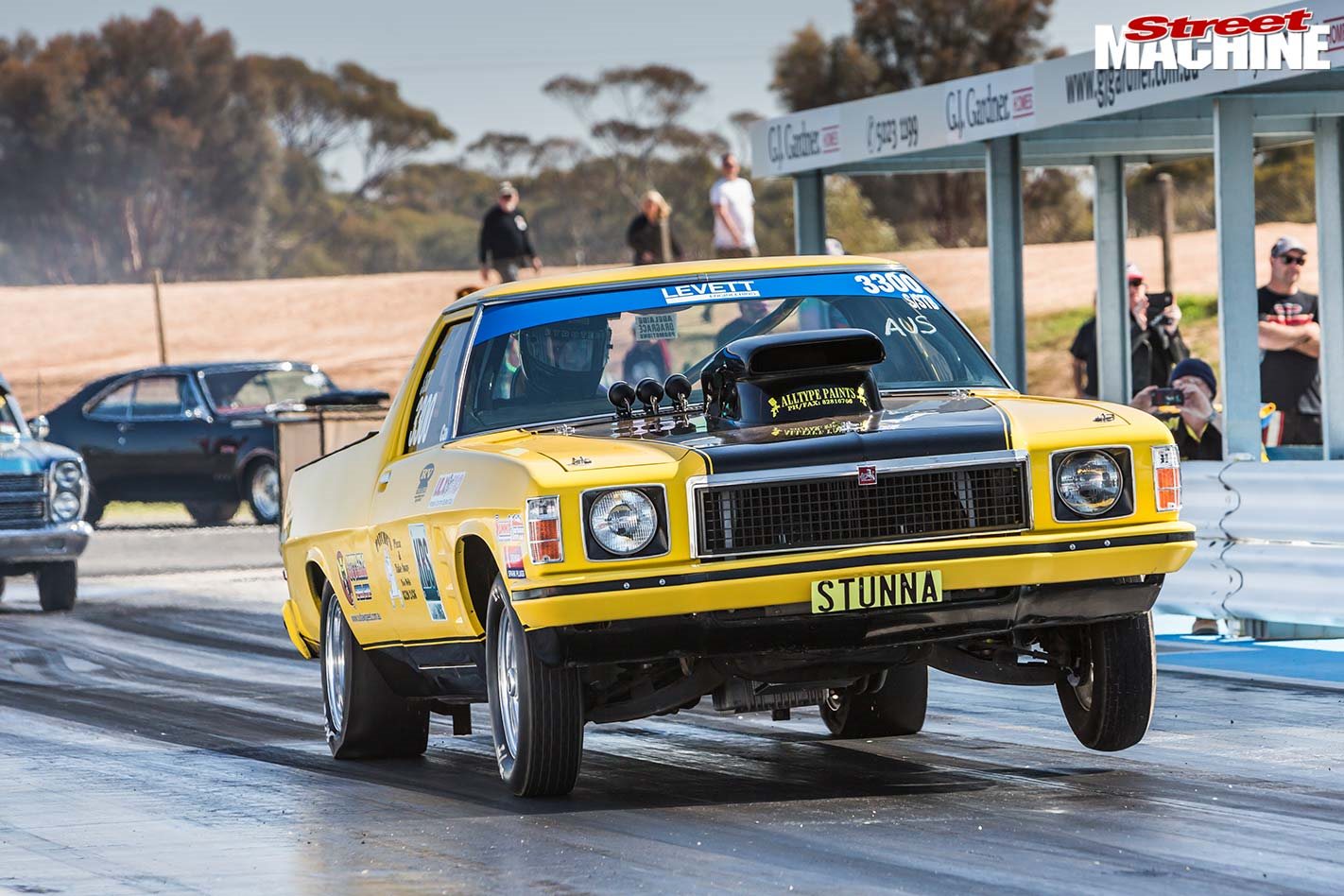 I’m building an HQ Kingswood sedan with a 308ci. It’ll be a cruiser, nothing flash – if I want to go fast I’ve got Yellow. With her I want to focus on consistency and do the rounds. I’m hoping to run an 11.00 next meet.