Chad Atkinson didn't cut up a bike to build his kids a bobber - he created it from scratch!

This article on Chad's Bobber was originally published in issue no.19 of Street Machine's Hot Rod magazine

AUSSIE kids normally get introduced to motorcycling on the back of a PeeWee 50, but Chad Atkinson’s young sons Royce and Sydney have something a whole lot cooler to learn on, and it is called Double Trouble. Chad, the bloke behind Silver Aces Custom Metal Fabrication, designed and built almost every skerrick of this super-cool kids bobber himself in just nine weeks. 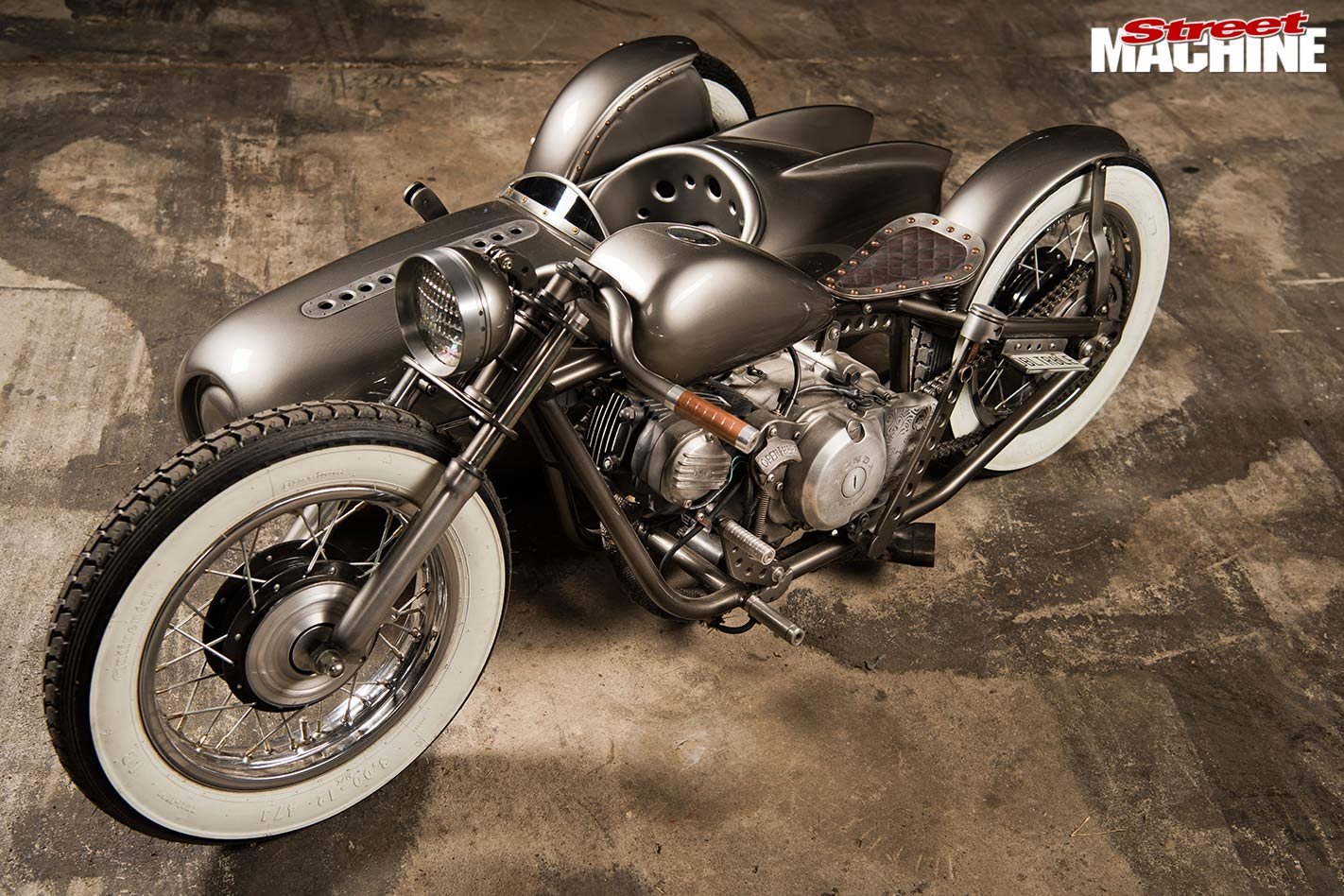 While the Continental 12in whitewalls look right at home, Double Trouble almost had a very different look. “Sourcing wheels and tyres was a headache as we were originally sent knobblies, and that almost changed the whole direction of the build,” says Chad. “Thankfully, a good mate helped me source exactly what I was after”

“I’d wanted to build a bobber for my boys,” Chad says. “The sidecar idea came about due to fact it was an extra seat and adding that would eliminate the potential for the bike getting tipped over.

“The base bike was non-existent, as it was all built from scratch by me at Silver Aces. From start to finish, everything was done by me, including the metal fab, trim, badges, engraving and custom paint.”

Chad started by bending the tubular framework, then metal-shaping the sidecar body, sidecar seat and floorpan, shaping the fuel tank and guards, and making the custom foot throttle. The headlight bezel was machined from a large piston to fit the custom bucket, while the alloy sidecar back-up brake lever uses shell casings. The handlebar, which came off Royce’s first bike and was modified to suit the bobber, has machined copper/alloy handgrips with recessed bolts. 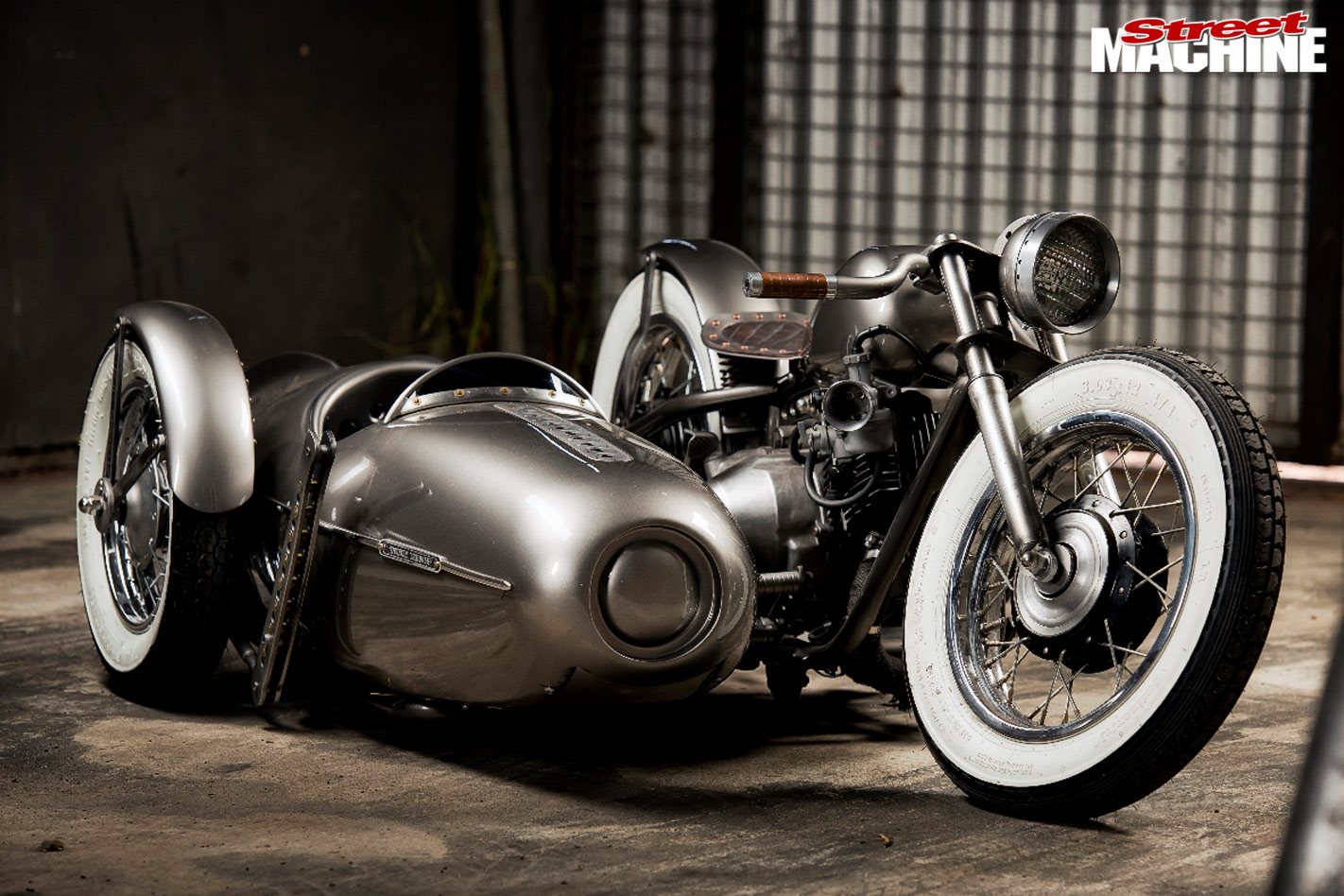 While some people start with a style or vision in mind, Chad chose to freeform-build Double Trouble, and it has given the bike a really sleek, flowing nature. “I don’t know how I came up with it,” laughs the fabricator. “That’s kind of the look I like. I was going for 50s mixed with a bit of steampunk and a bit of Art Deco. I didn’t really plan it!”

“The sprung seat uses valve springs from a motorbike engine, while the steel frame has been wrapped in padded and stitched leather, with a stainless riveted surround,” Chad explains. “The sidecar uses a padded leather insert on the backrest, stitched by me in a diamond pattern on a mate’s industrial sewing machine.

“If it was TIG-welded, it was metal-finished. I also used a lot of 1mm sheet steel, rolled with an English wheel, or worked with a shrinker/stretcher, hammers and bead rollers.” 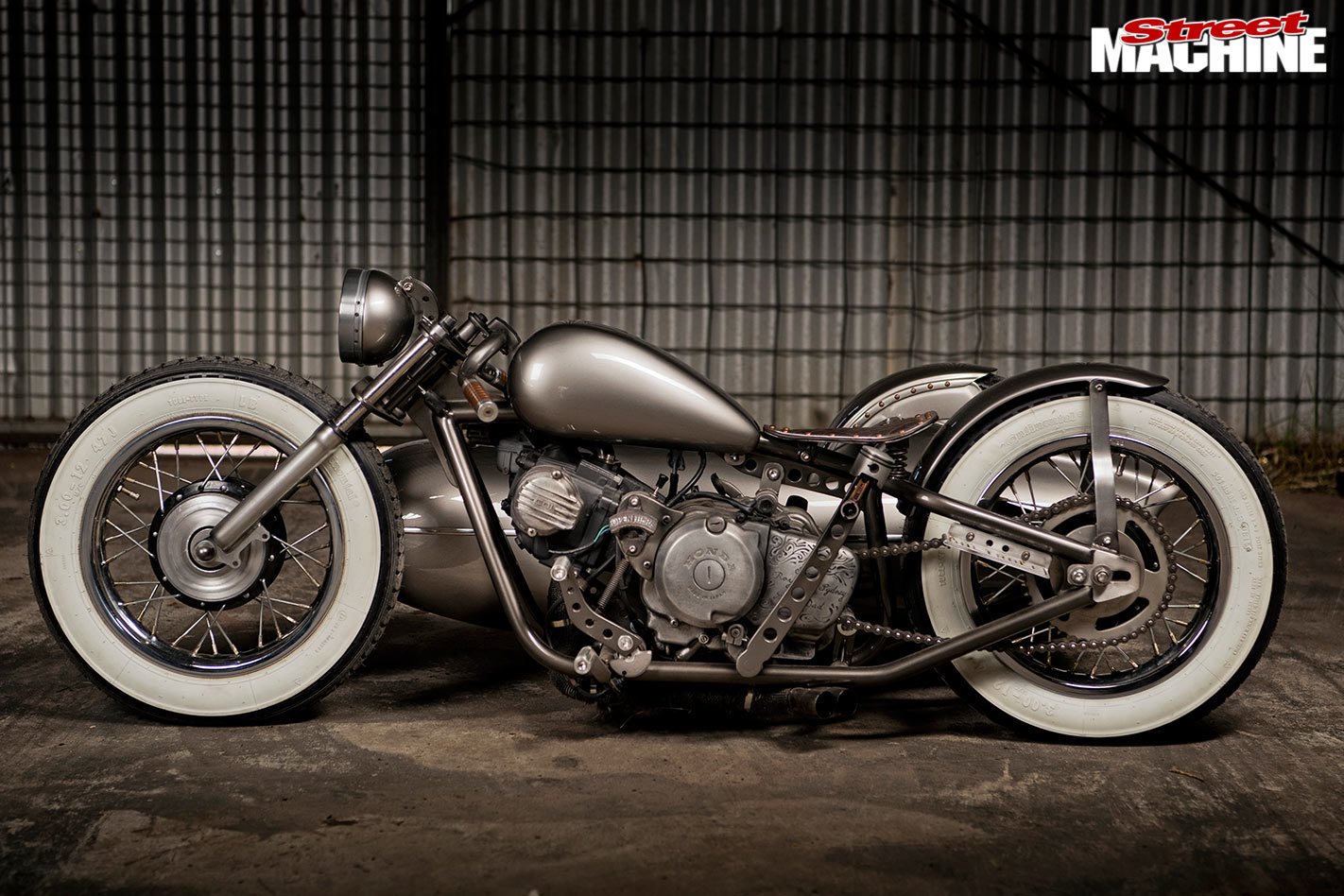 Amazingly, Chad didn’t start with a sketch or even a firm design to work off, preferring to let the inspiration flow into the build as he went.

“I’d never drawn out plans for this build; it was all done as I went, and thinking of how each part was going to function with everything else,” he says. “I never had the whole bike mocked up at once. It wasn’t until two days before the deadline I got my first real look at it, so all the build updates on social media were actually in real time!”

A few parts had to be remade or changed to achieve the right look or function, including the fuel tank and part of the sidecar. And what wasn’t made from scratch was recycled out of the spares bin. 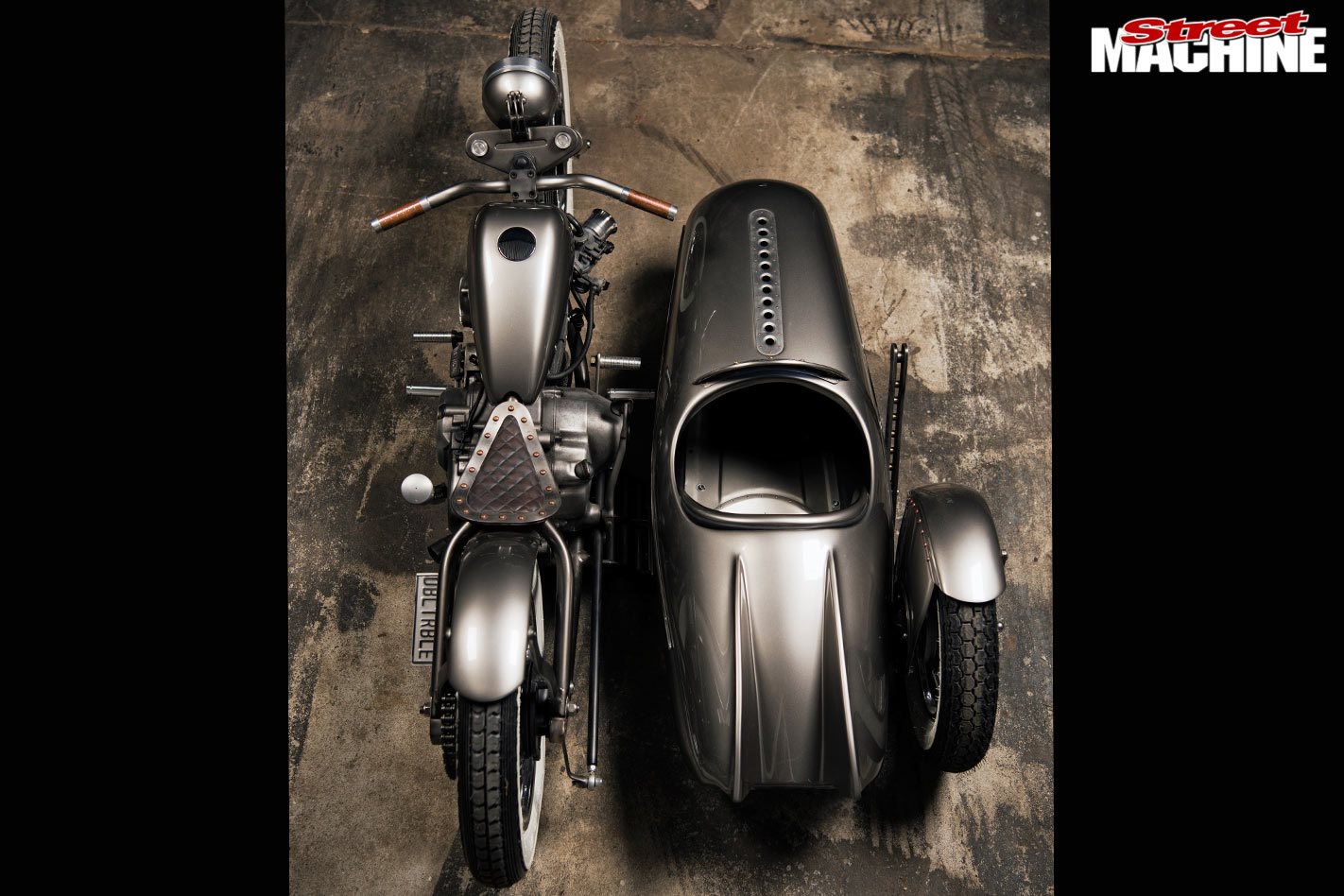 “A lot of the parts, or materials used to create the parts, are actually from stuff I had lying around, and most of it has its own ‘back story’,” explains Chad. “The engine was given to me by a mate, and the frame was basically built around that. I had to fabricate and modify a few bits of the engine, such as the intake, to clear where I wanted the top bar and fuel tank to sit. That, to me, is what hot rodding is all about!”

Once Chad had the style right, he blew the bike apart and laid down the custom silver paint for a super-smooth finish. 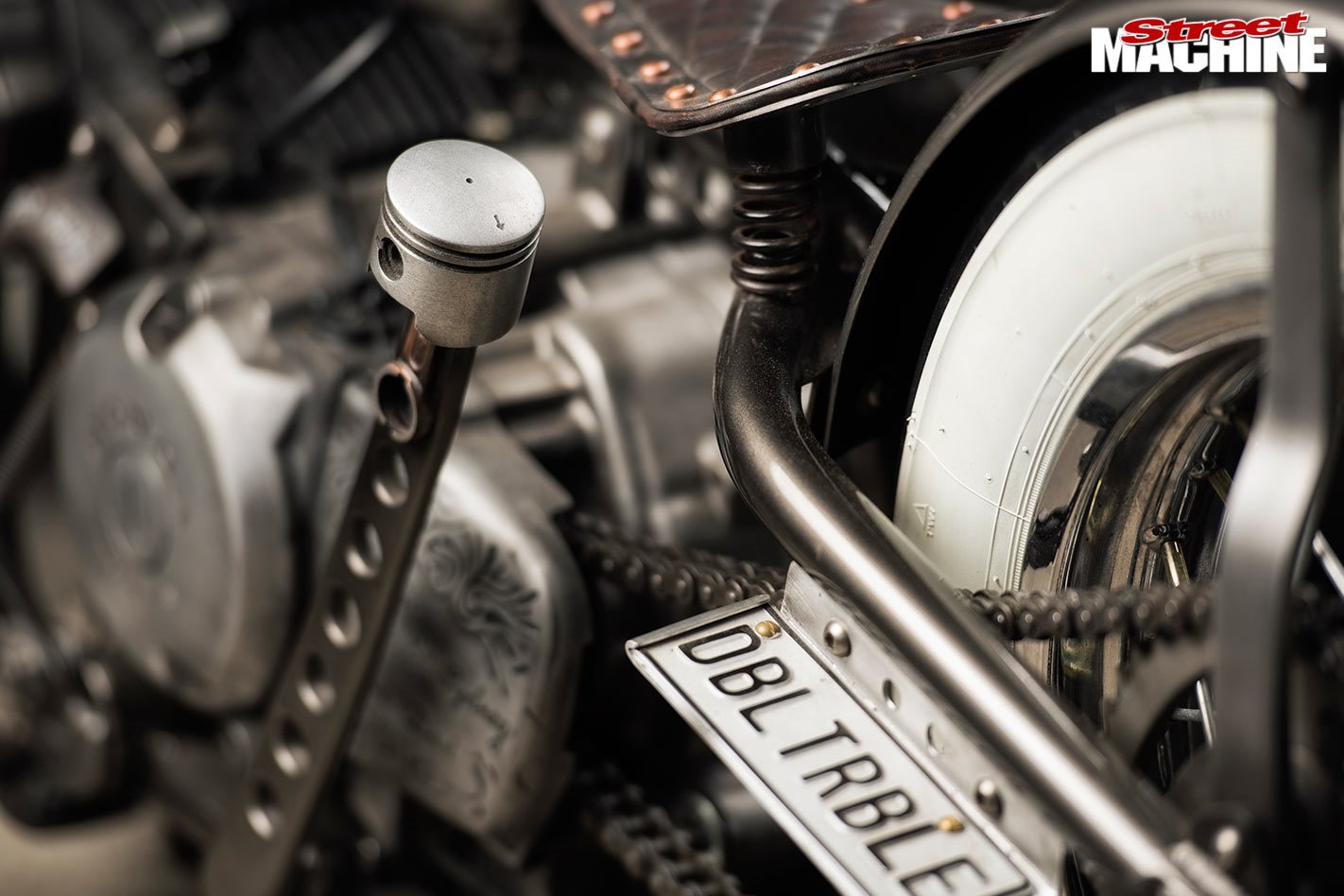 “The paint is a custom mix of silvers, with a few different pearls and an HS clear on top. There was two rounds of primer and block sanding before the base and clear coat went down, and this is the off-the-gun finish.”

Given his tin-lids have only been walking a short time, Double Trouble doesn’t need a ton of horsepower, and, with a heady 7.5hp as Honda made it, the CT110 single-pot donk is perfect. Similarly, while many bobber builds have hardcore manual transmissions, the stock postie-bike clutchless semi-automatic four-speed is perfect for a couple of novice riders. 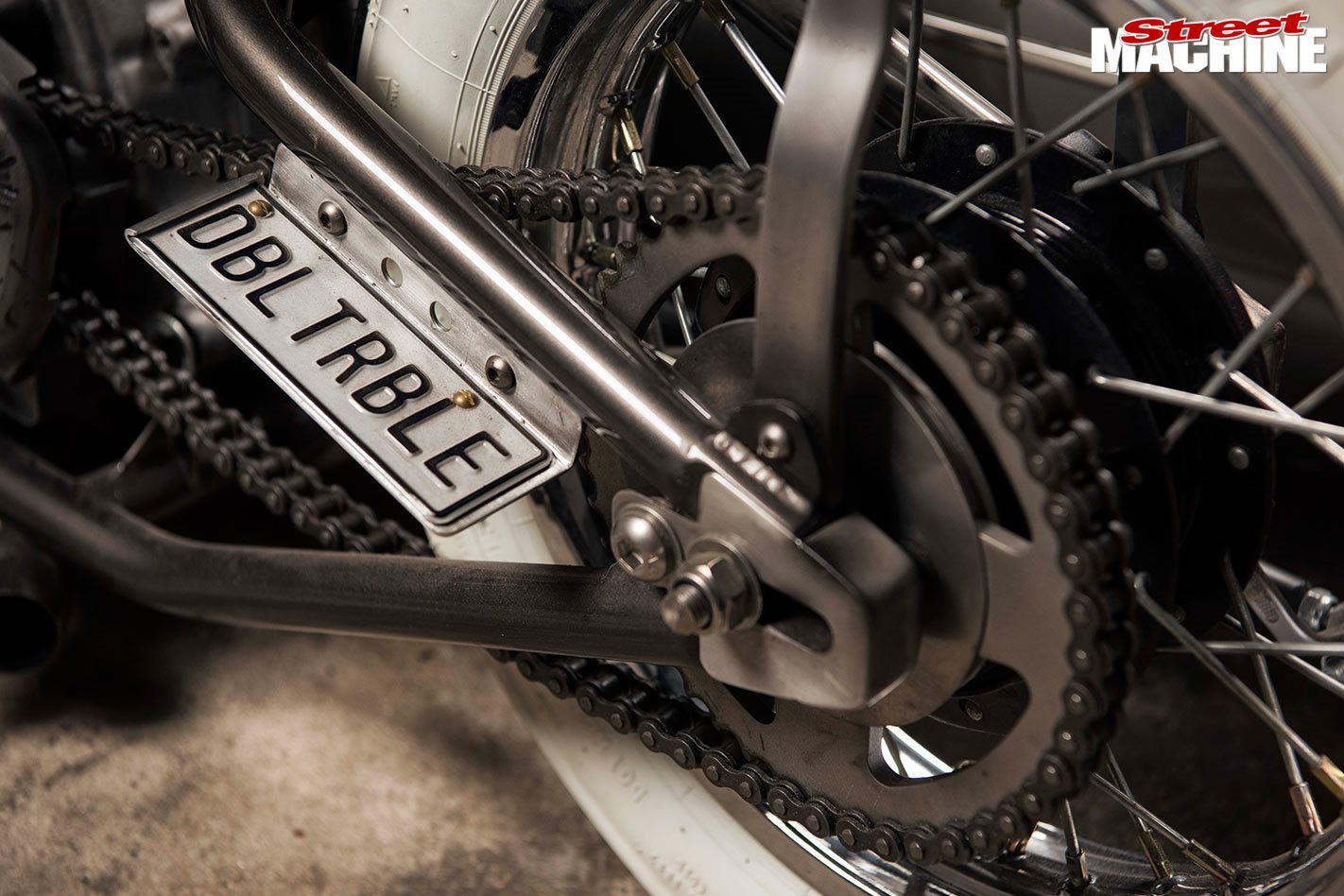 Chad’s remote location in WA forced him to be practical when making parts work: “I think those rims might have been for a pit bike and I got them online, but I had to adapt the postie bike sprocket to fit to the wheel. That adapter is actually made out of a harmonic balancer off a 4.0L six-cylinder engine. Where I am, there’s no shops nearby to go get a nice chunk of alloy!”

Down the back, Chad machined an adapter to fit the chain-drive sprocket to the hub of the 12-inch spoked rear wheel. The suspension is all found in the springs on the custom seat, while there is a mechanical drum brake on the back wheel, with a back-up custom handbrake on the sidecar if one of the boys feels the other is going a bit quick!

After a mad nine-week thrash, Chad debuted the bike to a rapturous reception. 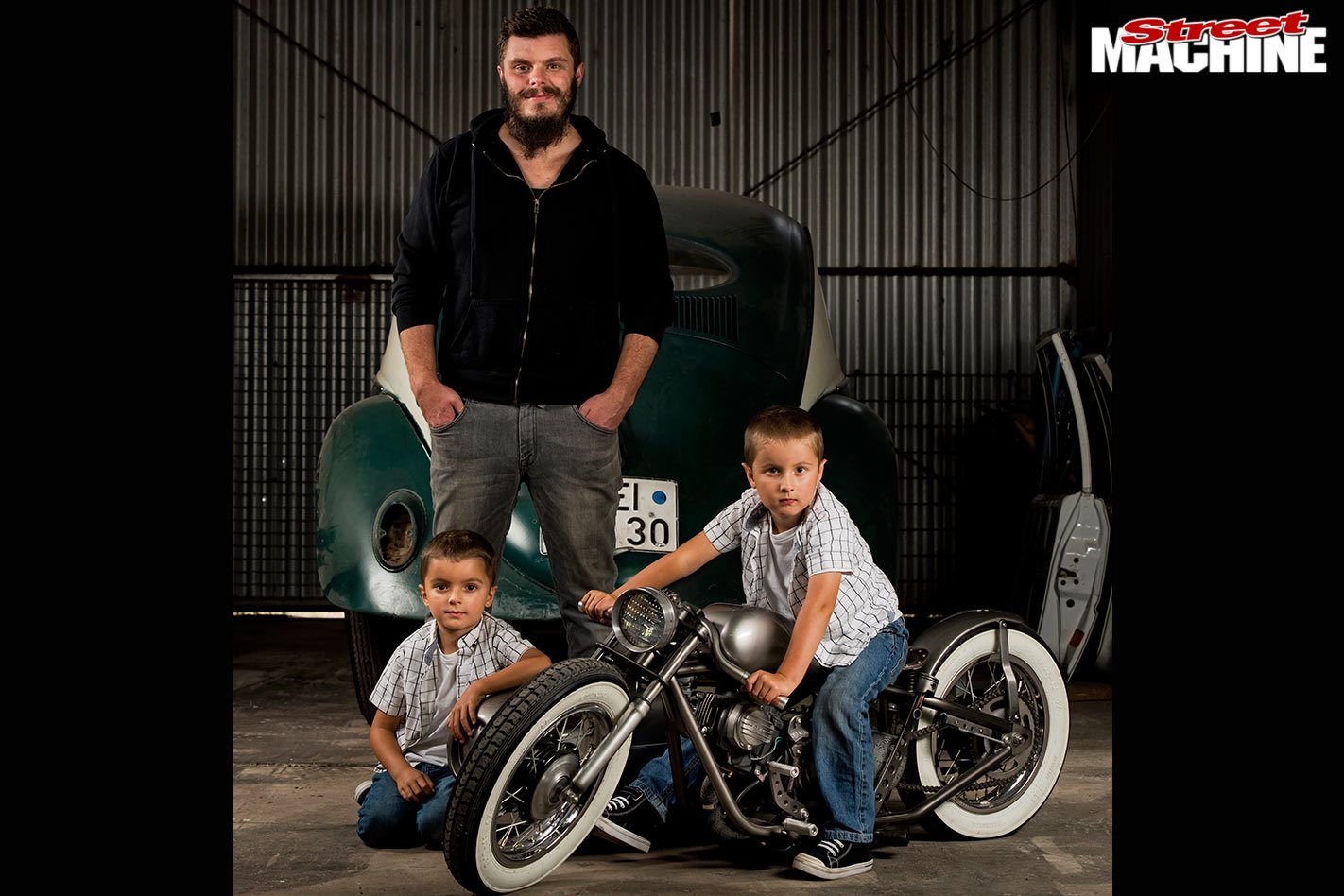 Chad isn’t resting on his laurels. “One of my current projects is designing and coachbuilding my own full-sized hot rod, plus I am also building a TC Cortina wagon drift car and a ’bagged truck, amongst other stuff!”

“I built it to debut at the West Coast Lowdown show and it took out three trophies: West Coast Lowdown Choice, Builders' Choice and People’s Choice,” Chad says. “But it was never about trophies or winning for me. That show was just a great platform and deadline to have.

“My goal was to produce something my boys could enjoy and have in the family forever, and watching them ride it for the first time is still is the best part!”

Hopefully it kick-starts a passion for fabrication and hot rodding in the boys and they follow in Chad’s footsteps. 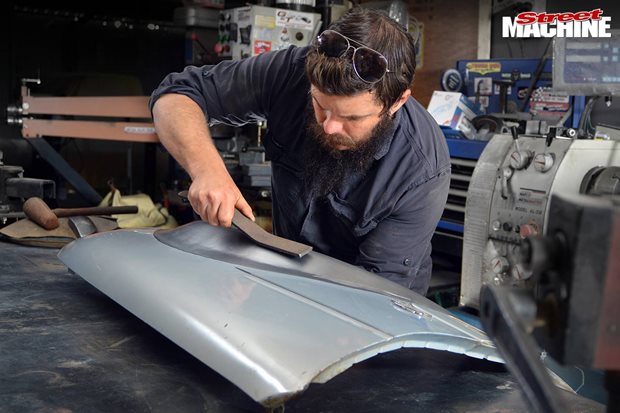