After a quarter-century languishing in a shed, Luke Orpwood's 1960 Impala was given a heavy dose of grand national grunt

CHRISTCHURCH’S Luke Orpwood is the owner of this amazing 1960 Chevy Impala known as Grim. “I’ve had it for 10 years and it was in bits for eight,” he says. “I found it in a barn in Dalhart, Texas, where it had sat for 25 years. 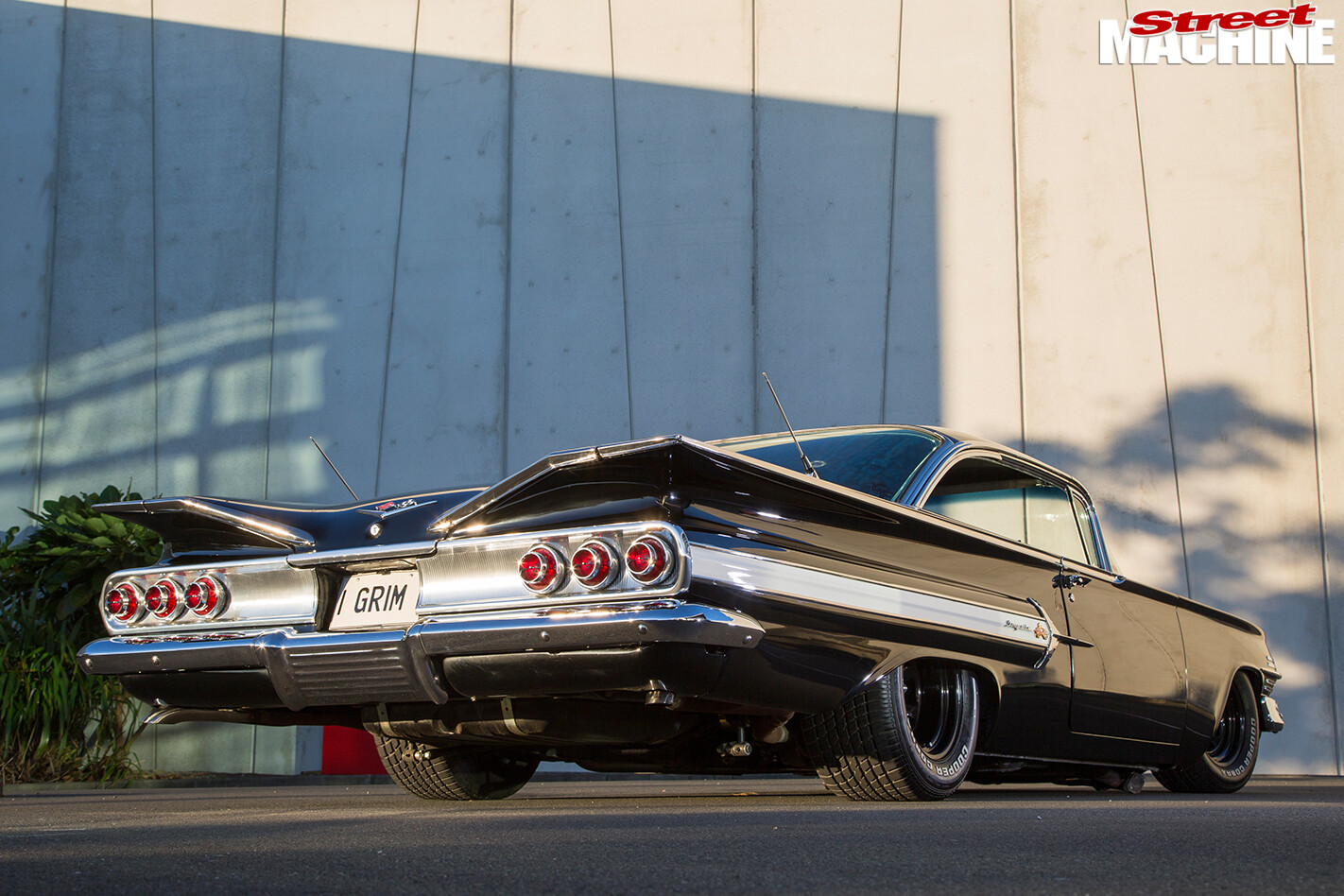 “I’ve always been around classic cars since I was born,” he continues. “So I had no real choice in liking cars, with a dad who lives and breathes hot rods. I always wanted a big Yank tank ever since my dad had a ’65 Caddy convertible when I was a little kid.” 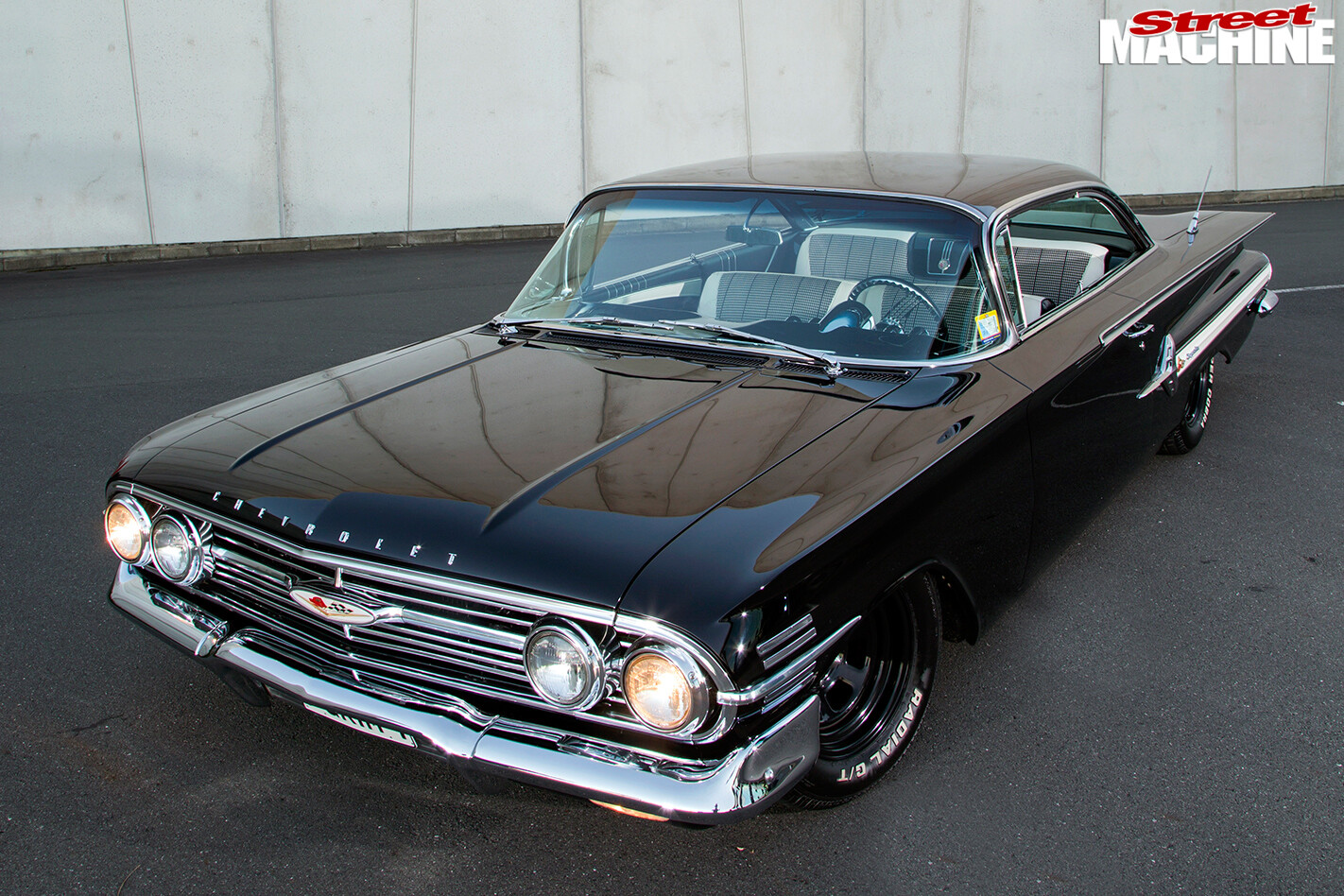 While many think of Cadillacs as the ultimate in full-size American excess, the ’60 Impala is no tiny compact, with its over-three-metre wheelbase. Its slippery shape and optional 348ci V8 made it a natural choice for the burgeoning new sport of Grand National stock car racing, which had run its first super-speedway event just a year before at the inaugural Daytona 500. 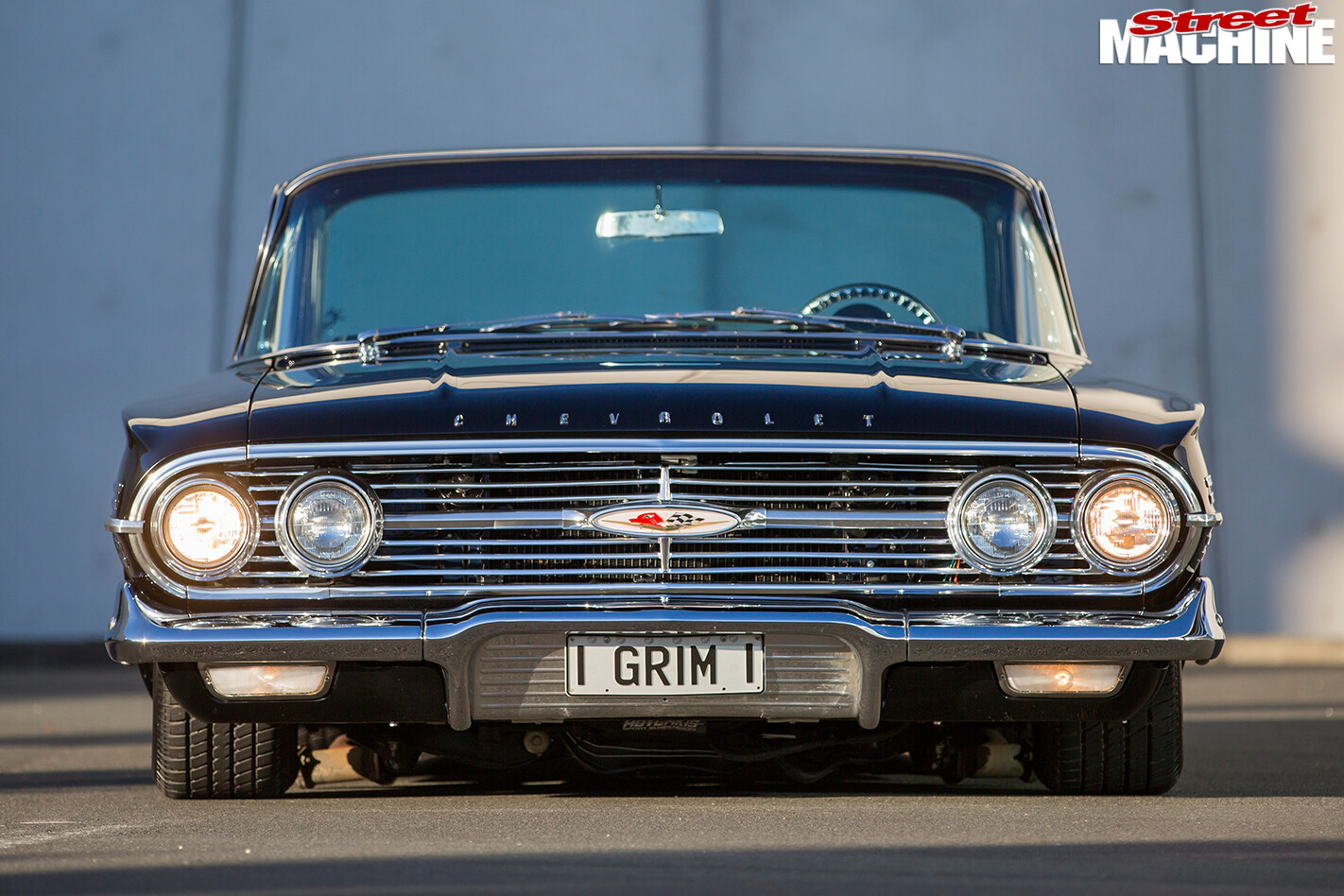 Luke’s Chevy was no NASCAR high-banked flyer, though, and after he brought it home to NZ it spent its first few years cruising in a ratty original style, before he bit the bullet and undertook a full-on, ground-up rebuild. And this time he injected plenty of Junior Johnson NASCAR menace into the big coupe. 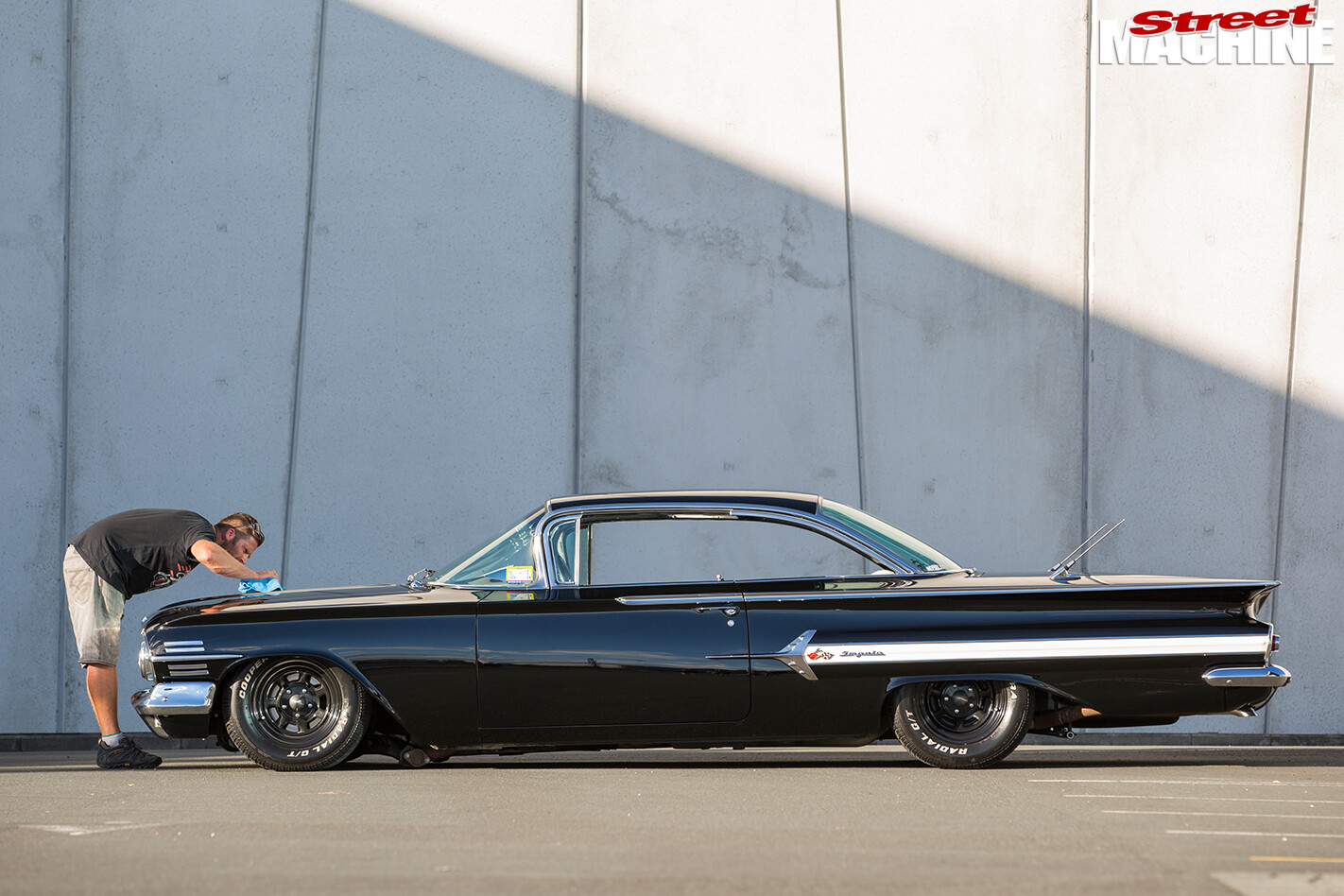 “The car was completely stripped, the chassis powdercoated and everything either replaced with new or reconditioned parts,” Luke says. That’s not to say he didn’t have his share of issues with some of those. “It’s amazing; you buy stuff that should fit straight on, but nothing ever does. I’ve always got to modify it to fit, which is so annoying. “It also took way too long to build! Good old cash flow held things up, and also the body fell off of the axle stands during one of the thousands of quakes we have in Christchurch.” Thankfully he had NZ’s finest metal craftsman, Jason Burke of Burke’s Metalworks, and his talented crew in his corner, ensuring the body would be perfect. And Jason, Jake, Phil and Dave had to ensure that sunburnt shell was die-straight, since the Glasurit Jet Black that Jason Hampton was to spray over it would show any imperfection. 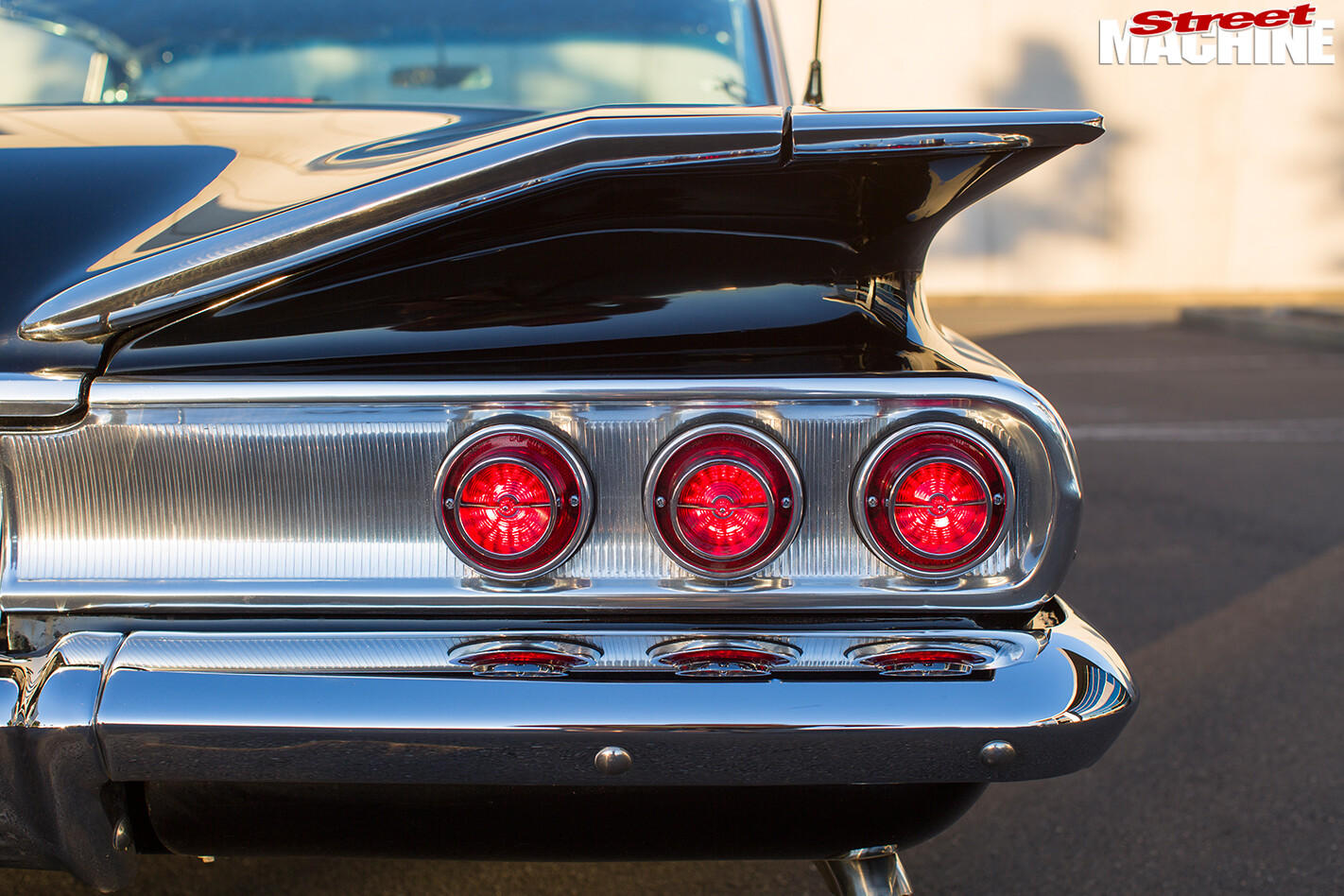 Many would be tempted to start chopping and changing the body, but Luke had the good sense to leave the jet-age styling alone and let the GM designers’ wild vision of the future stand, with all its factory brightwork and crazy lines intact. It’s matched with an incredible interior by Willy Sales, combining factory black-and-white houndstooth trim with period-looking upgrades like the RetroSound stereo and Hurst shifter. 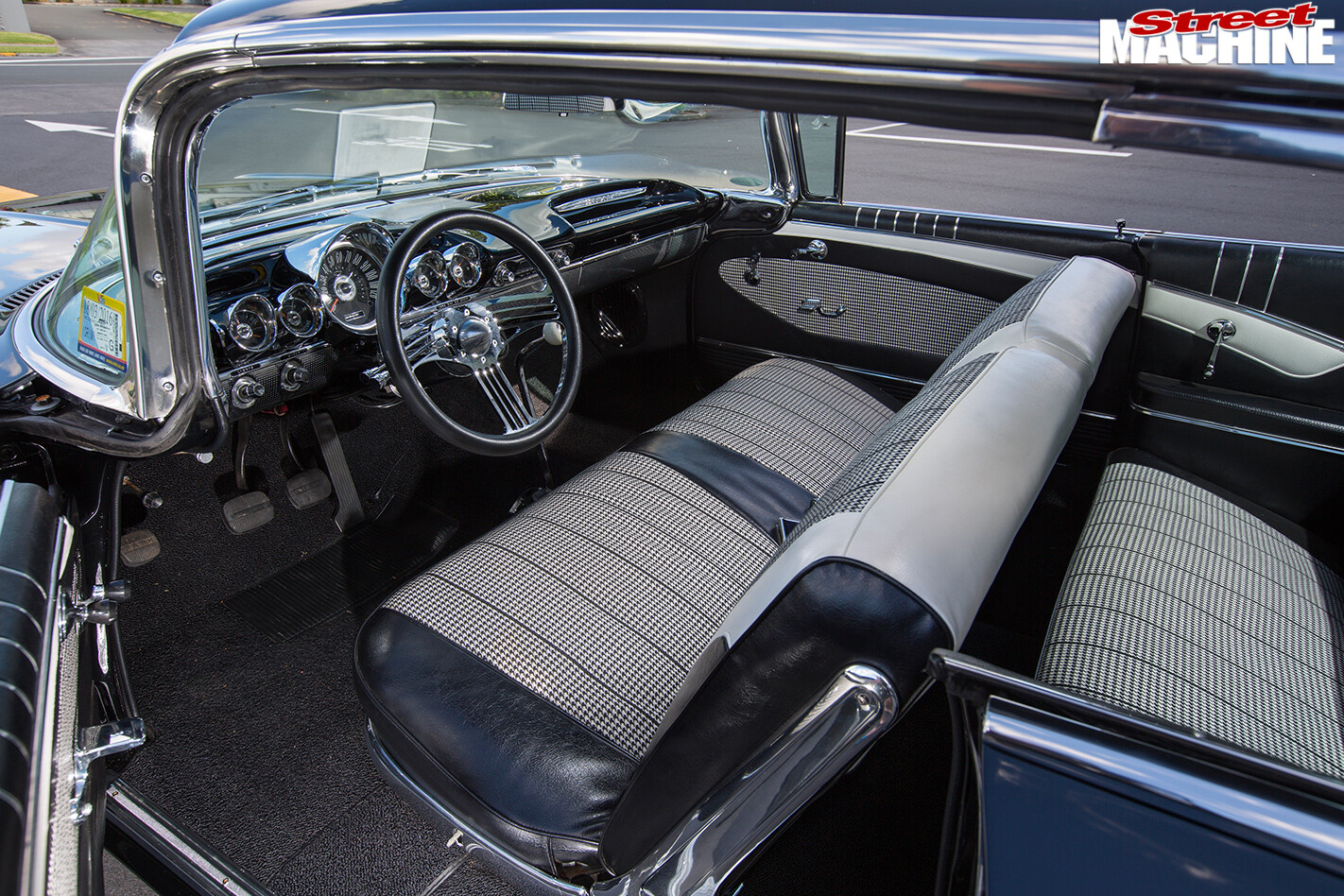 Yes, just like the stock cars, Grim is a DIY-shifter, with a period-correct Muncie M21 four-speed hooked up to a tough 348-cube V8 and a “shitty 12-bolt” diff, though Luke has his eye on a built disc-brake nine-inch once the Salisbury dies. The engine will certainly make short work of it thanks to a bunch of 60s-style upgrades. Back in 1960 the hottest Impala came with the 350hp Super Turbo-Thrust Special 348, packing triple two-barrel carburettors and an 11.5:1 compression ratio. Luke’s car runs tamer 10:1 forged Ross pistons, but adds an Isky cam, stainless valves and dual valve springs under the trio of Rochester two-barrels, and he’s shopping for a set of alloy heads for it, too.

3
A big car with an old-tech big-block Chev 348 might tick all the righteous boxes, but there can be drawbacks. "Fuel economy is out the window, with 11mpg, but that's the price of cool, I guess," says Luke

The exhaust exits via Doug’s Headers and Coffin mufflers, with ancillaries all upgraded in the name of reliability. This meant an MSD ignition, 14-inch electric fan and Edelbrock fuel pump. 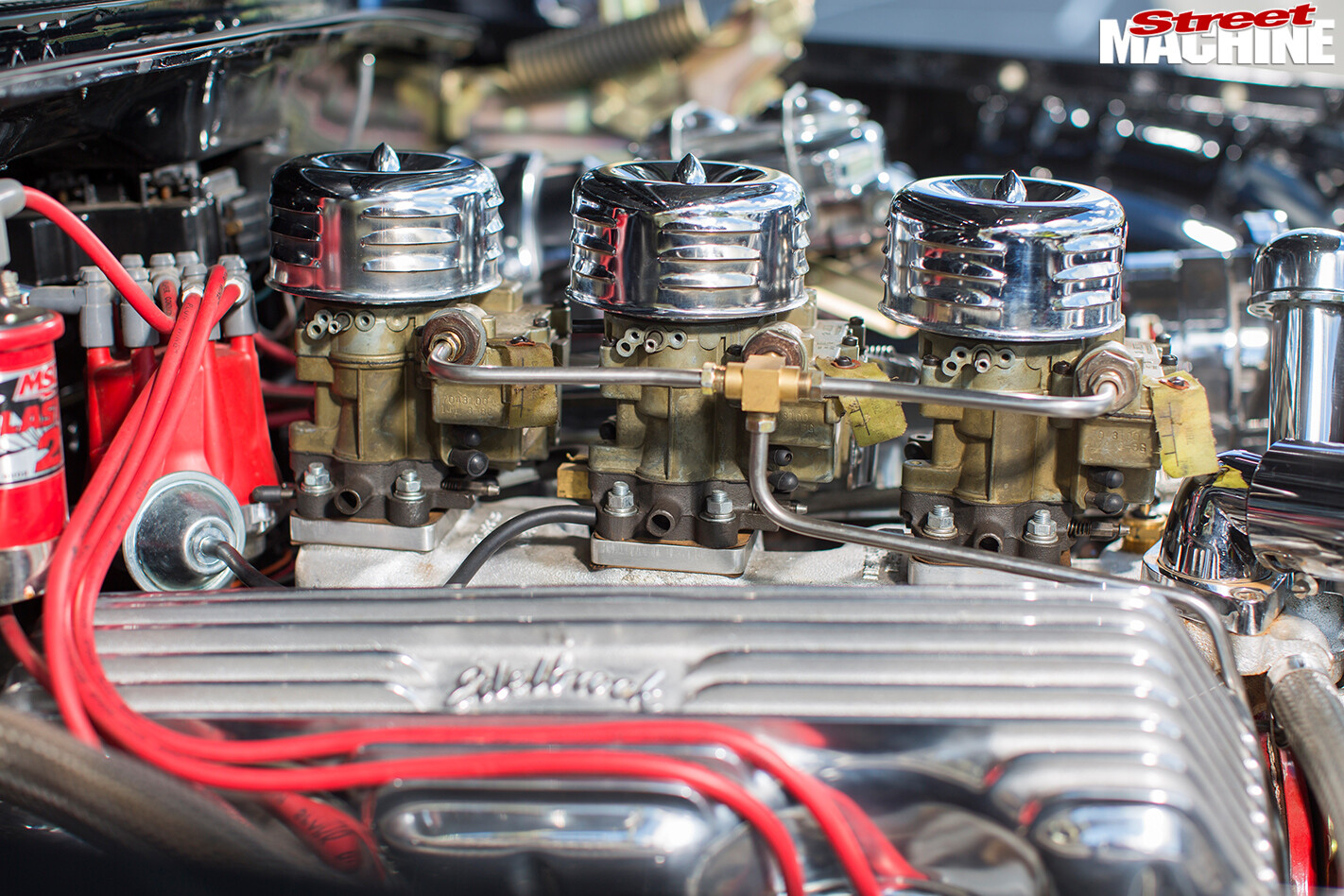 Part of the reason Grim is such a stunning-looking car is the way it’s hunkered down over those fat 15x8 and 15x10 custom steel wheels that replicate NASCAR-spec Cragar D-window race rims. That aggro stance is achieved through air suspension, with Shockwave air struts used up front and Slam Specialties ’bags in the rear, controlled by AccuAir VU4 valves and a Viair compressor. 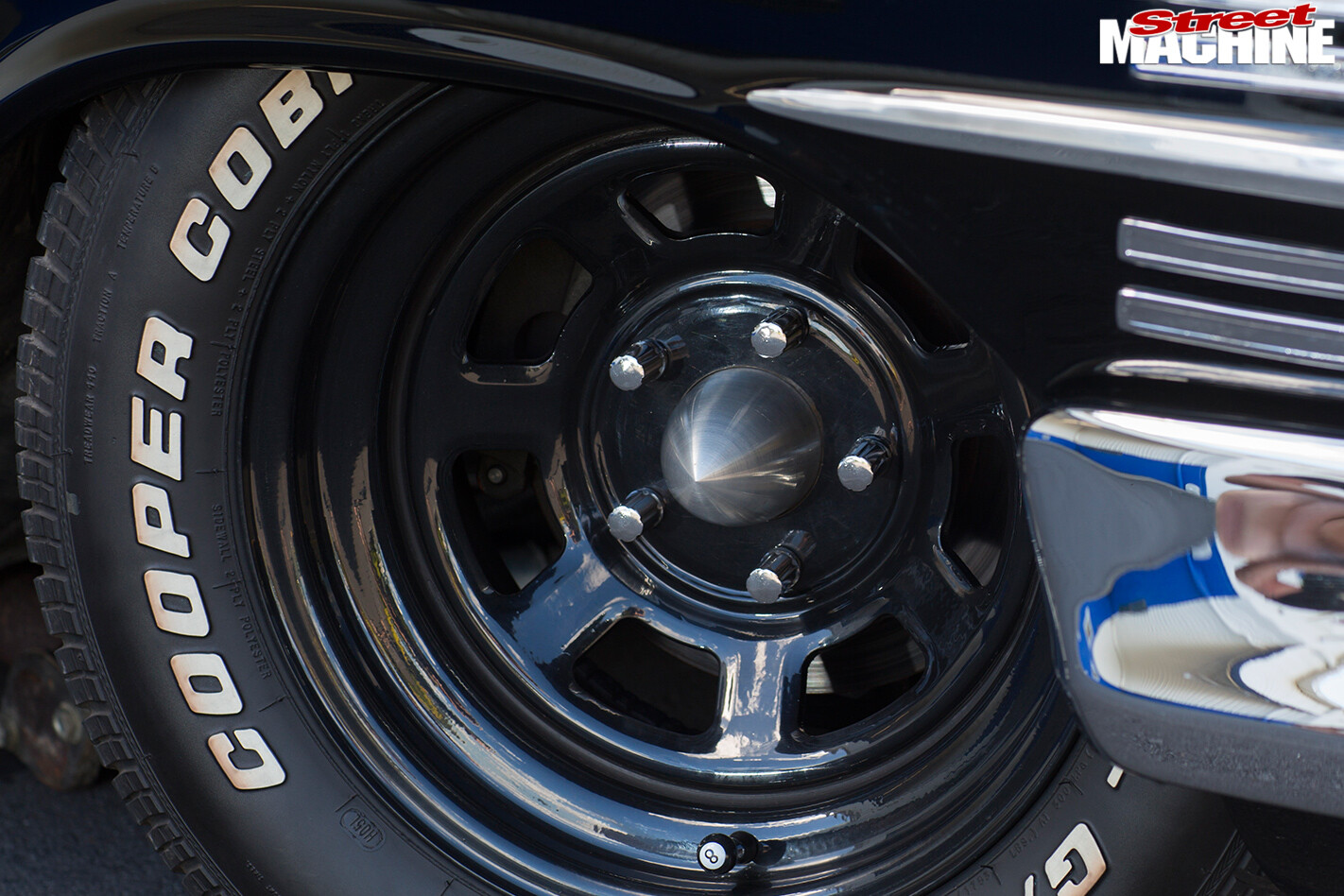 Luke had set himself a goal of making the 2015 Muscle Car Madness show. “For the past five years at Muscle Car Madness I’ve been saying: ‘It will be done for next year,’ but this year was the year of completion, come hell or high water!” he says. “It took out Best Chevrolet and a Top 10. I’ve had the Chevy there in 2005 and ’06 looking rough, so it was good to take it back in show condition. 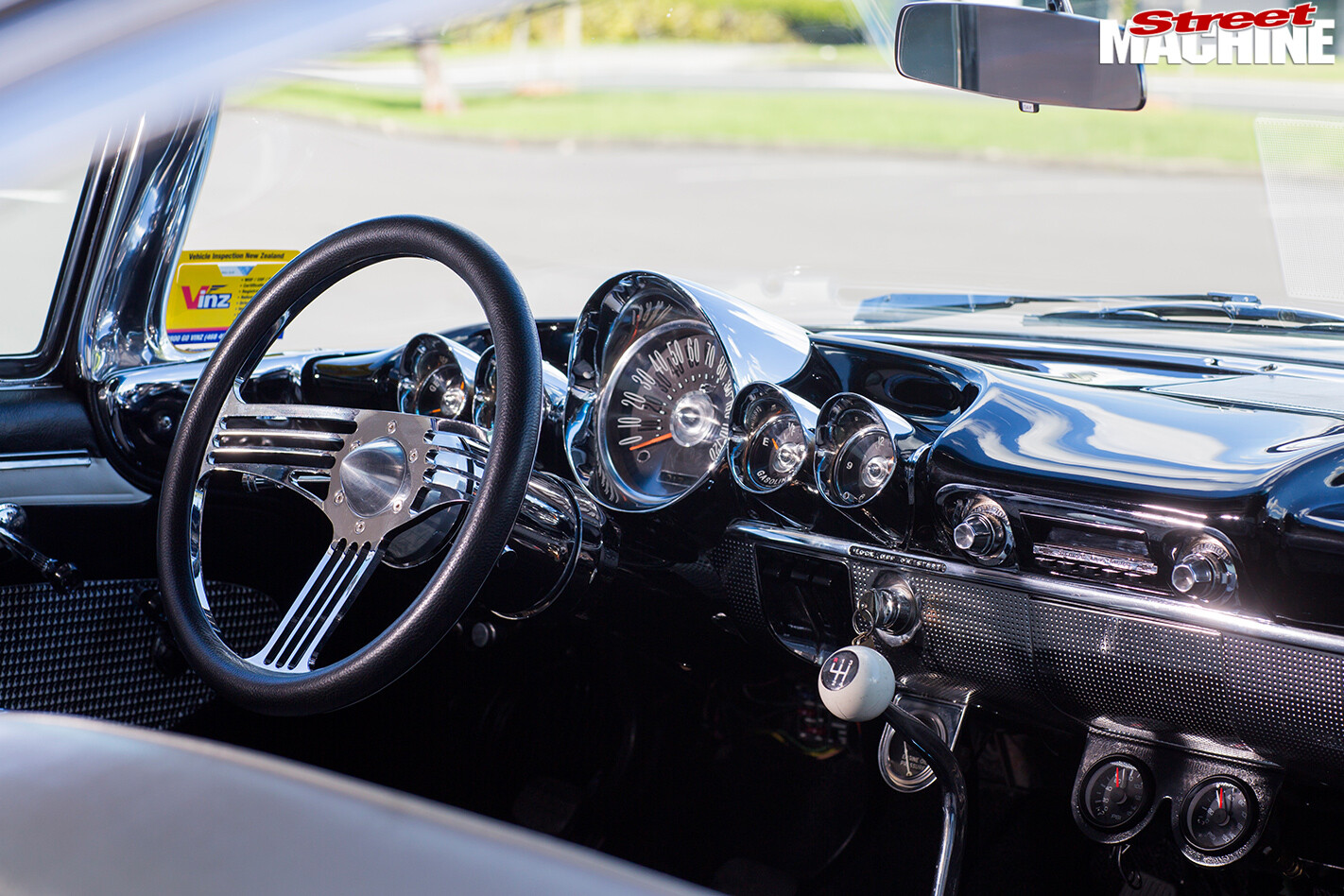 “I also took it on its maiden voyage to Beach Hop,” he continues. “It didn’t get any prizes, but the biggest prize for me was driving from Christchurch to Whangamata and on to Auckland, then back to Christchurch with my lovely wife, who has put up with my excessive spending on it over the years. She is stoked it’s finally on the road!

“I’ve gone way overboard with it, but I love it. Now it’s done I plan to drive the shit out of it!”