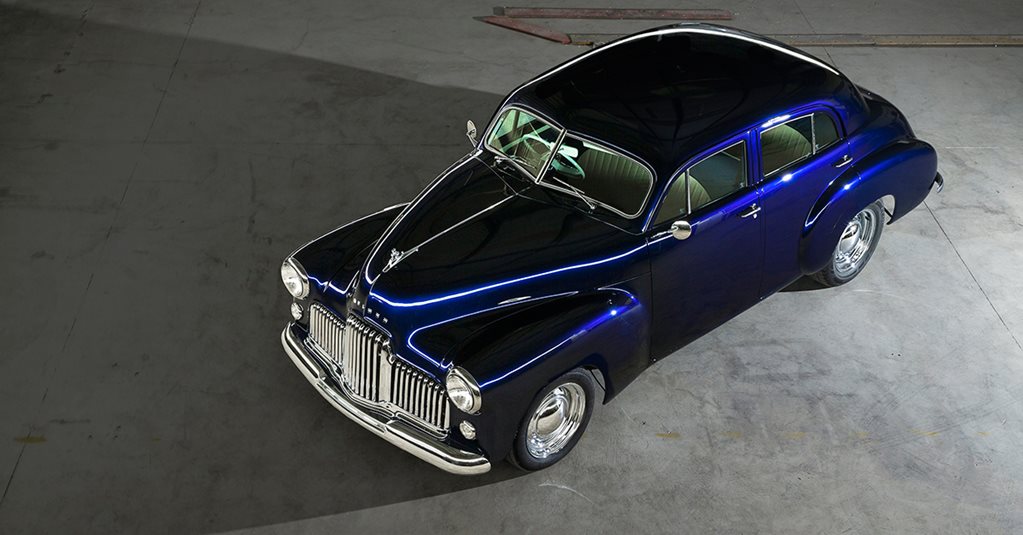 YOU’VE probably heard of Auto Transformers. The Adelaide-based workshop has churned out some quality customs and full turn-key builds, including owner Andrew Mitchell’s own ’39 Lincoln Zephyr coupe (SM, Jan ’14). West Australian Les Rogers had heard of them too, and despite living in a different state he trusted them to build his chopped V8-powered Holden 48-215 (FX) sedan in South Australia. 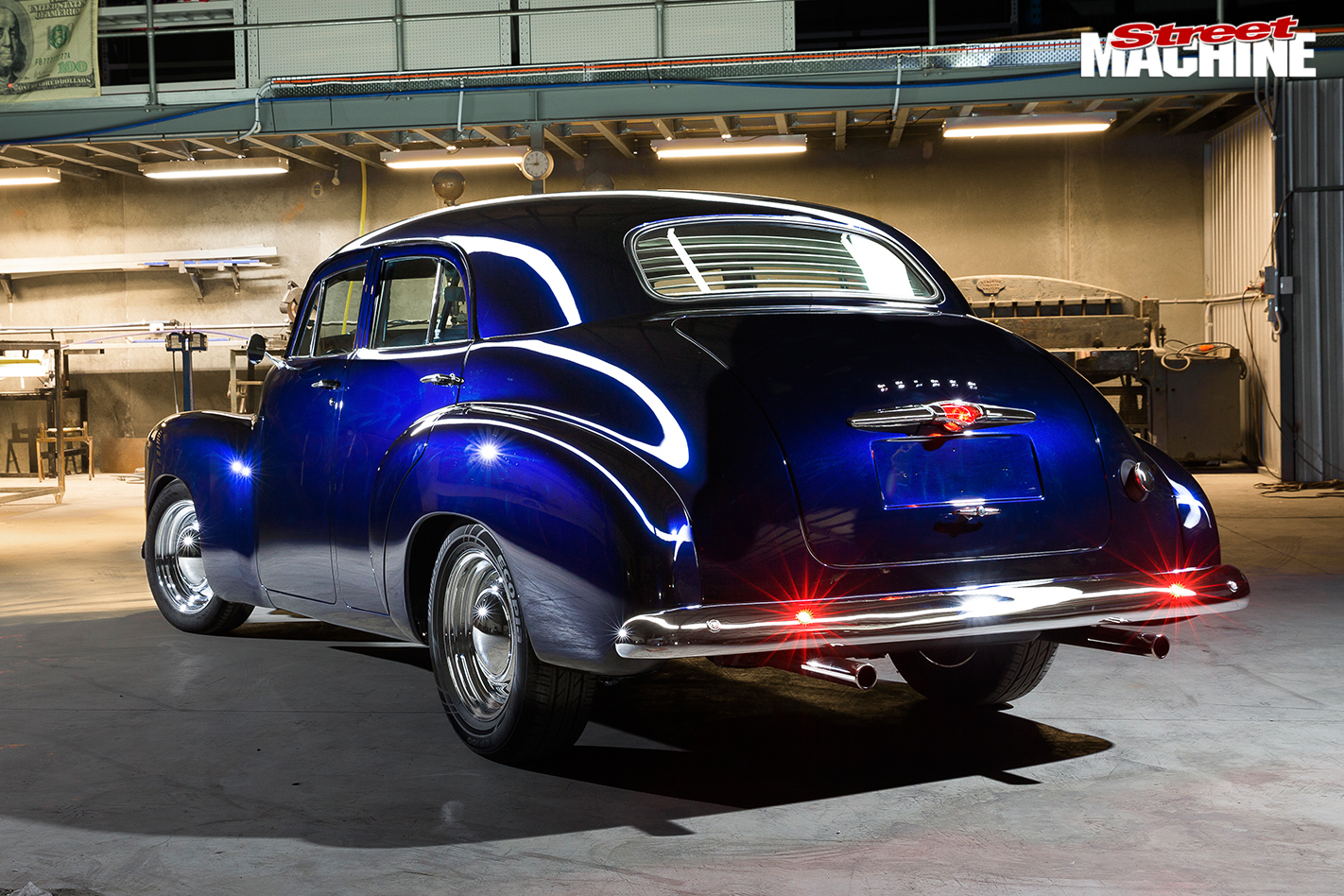 Turns out Les and his FX have a connection to South Oz. “I lived in the Barossa Valley and bought the FX when I was 18 years old,” he says. “Then one night as I was driving home from a 21st we ended up in a paddock – as young blokes do! I damaged some of the underneath but didn’t hurt the body. So I put the car up on blocks in my parents’ shed for the next 30-odd years.

“Recently my mum passed away, so I had to do something with the car,” he continues. “I always was going to do a project and I had seen a chopped FJ ute that I liked the look of.” 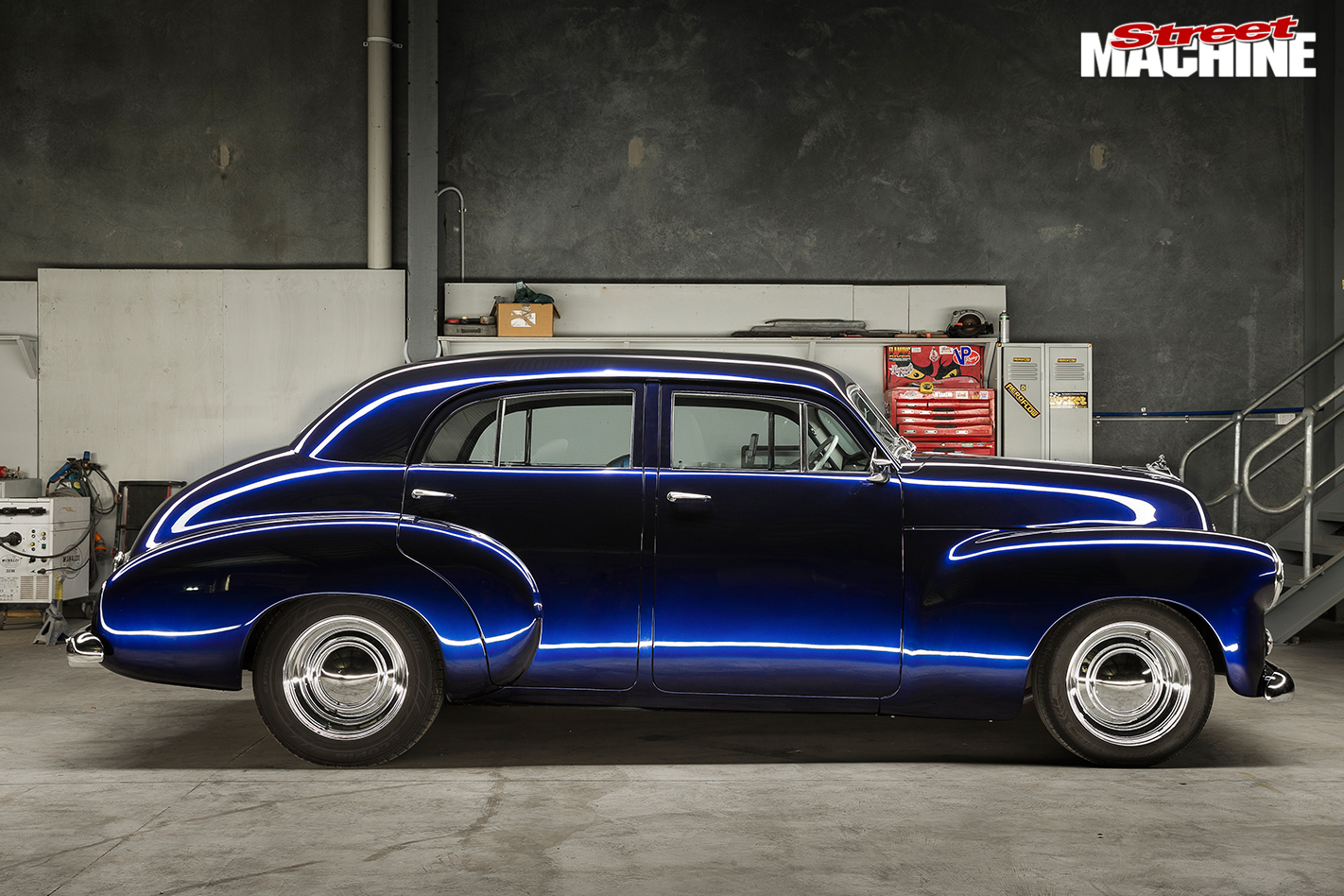 To get the build underway, Les researched a bunch of workshops to find who had the best reputation, and the FX soon found its way to Auto Transformers. Les is a busy bloke, so it was up to Andrew and the team to provide strong communication backed with a hearty commitment to creating Les’s dream. As you can see by the pics, they certainly went the extra mile – and then some. 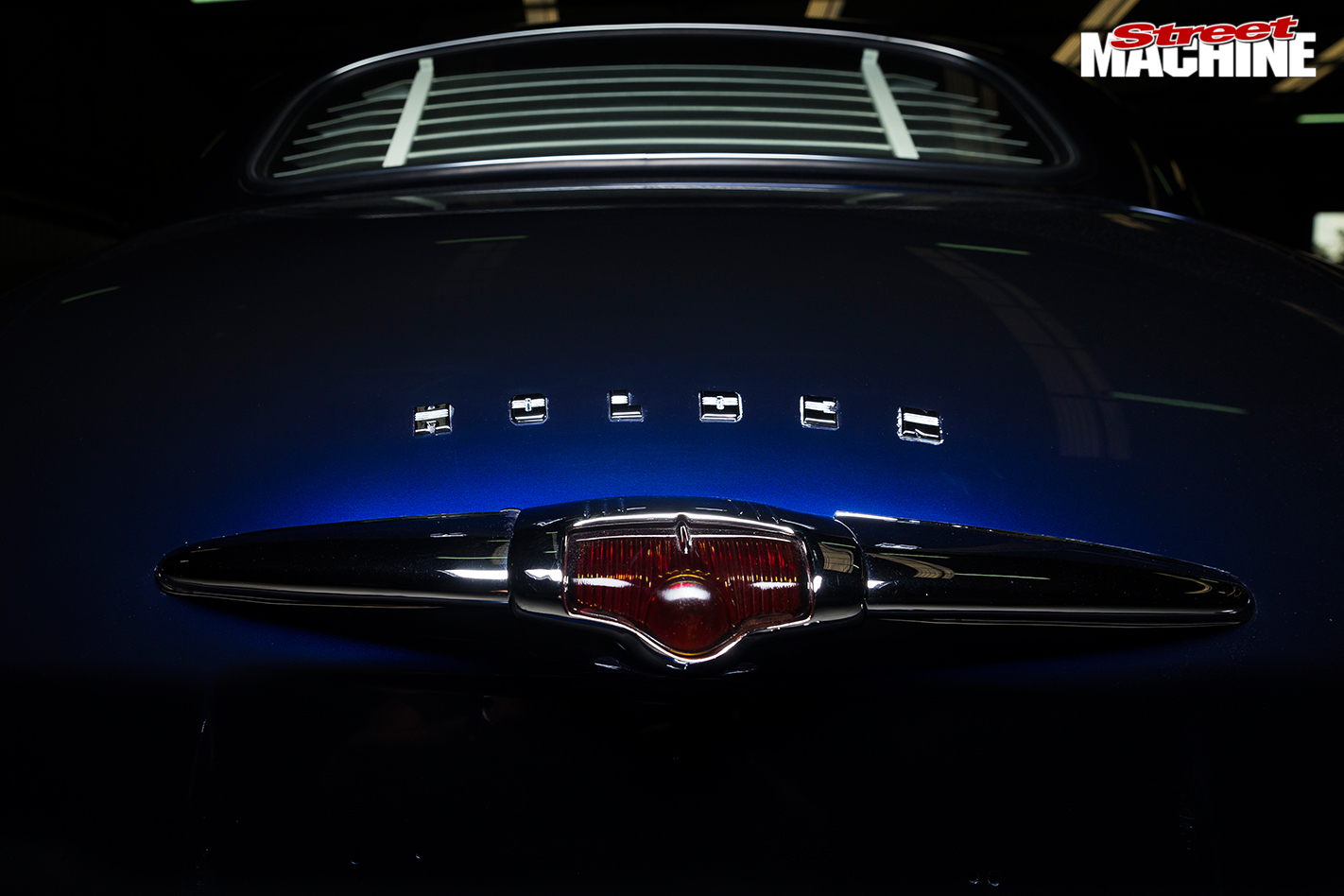 “The brief was to build a nice reliable street car with tidy paint and interior, good running gear and a bit of get up and go,” Andrew says. Thankfully the starting point was pretty good for a 68-year-old FX – a bit rough around the edges, with a little rust and a few knocks. Auto Transformers set about stripping it down, then added internal bracing as prep for a bit of a haircut. Overall, 3¾ inches have been removed, yet the rear window was kept at stock height. As the A- and C-pillars also kept their original slant, the car has a rad ‘what if’ factory feel. 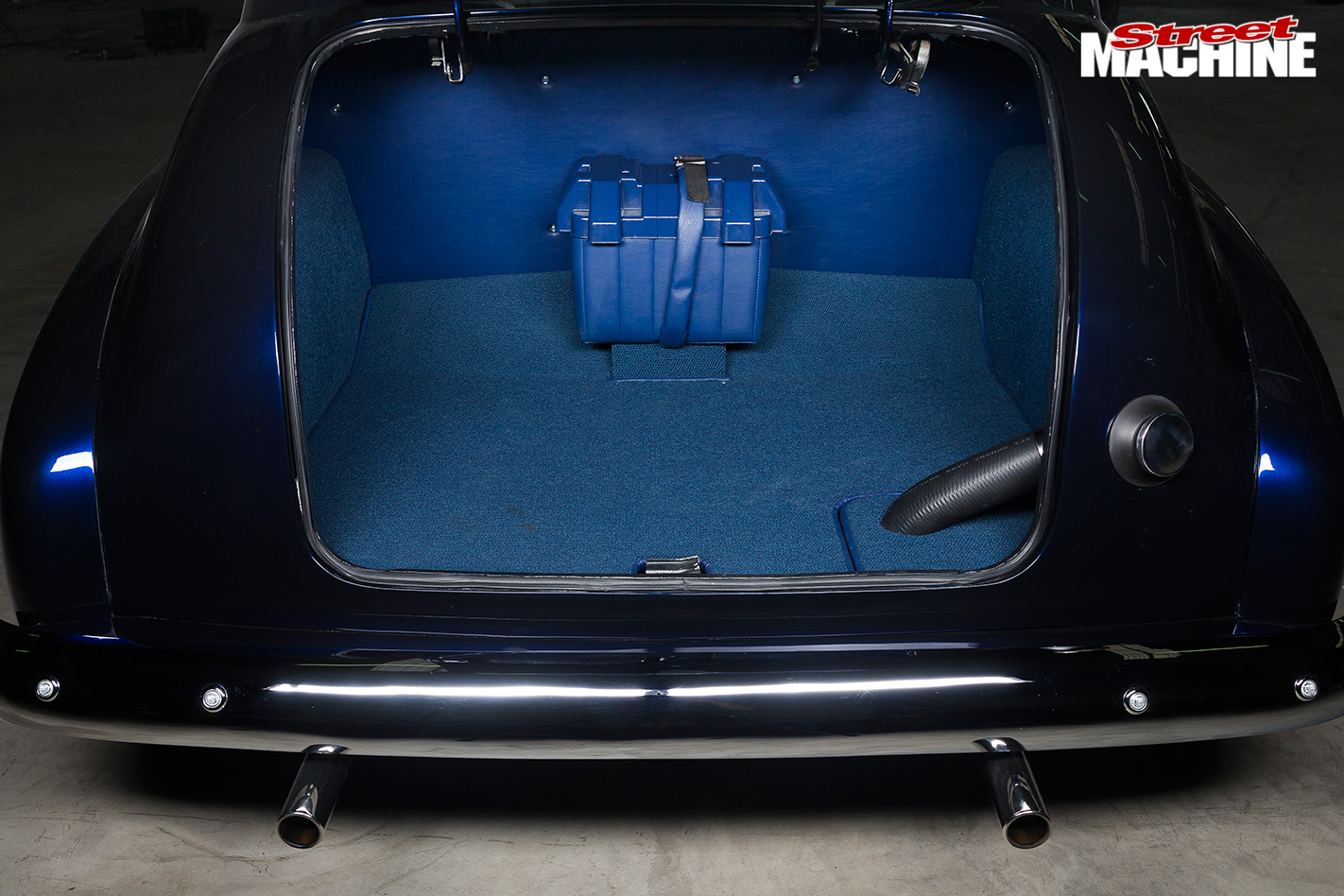 To fix a nine-inch and twin pipes underneath without knocking, the boot floor was raised and moulded to suit

Next, the door frames were realigned to the lowered dimensions, then panel gapping commenced. Gone is the side bulb of the doors as they meet the B-pillar; now it’s a dead-smooth line as you cast your eye front to back, with the gaps at a pleasing, even distance. The rear fender rubber was deleted and the bumpers were smoothed off, with tail-lights and indicators now residing in the rear unit. 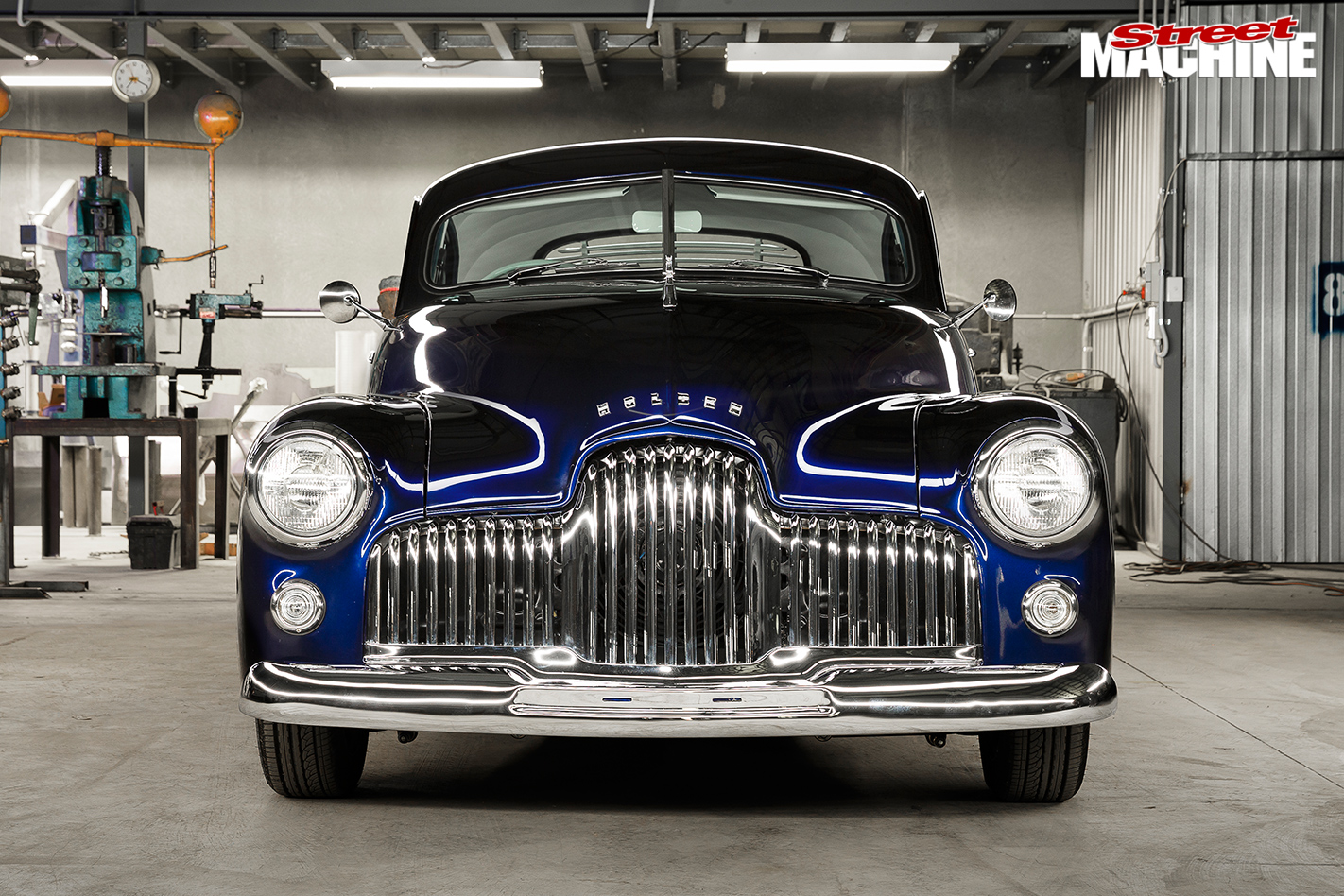 To best display the custom touches, the body was clothed in a dark blue sparkle. “Les wanted a nice shade of blue,” Andrew says, “and after looking at cars on the road and in caryards he finally found the Mazda Stormy Blue.” The chosen hue was expertly laid on in-house and shows off the deft panel work to a T. 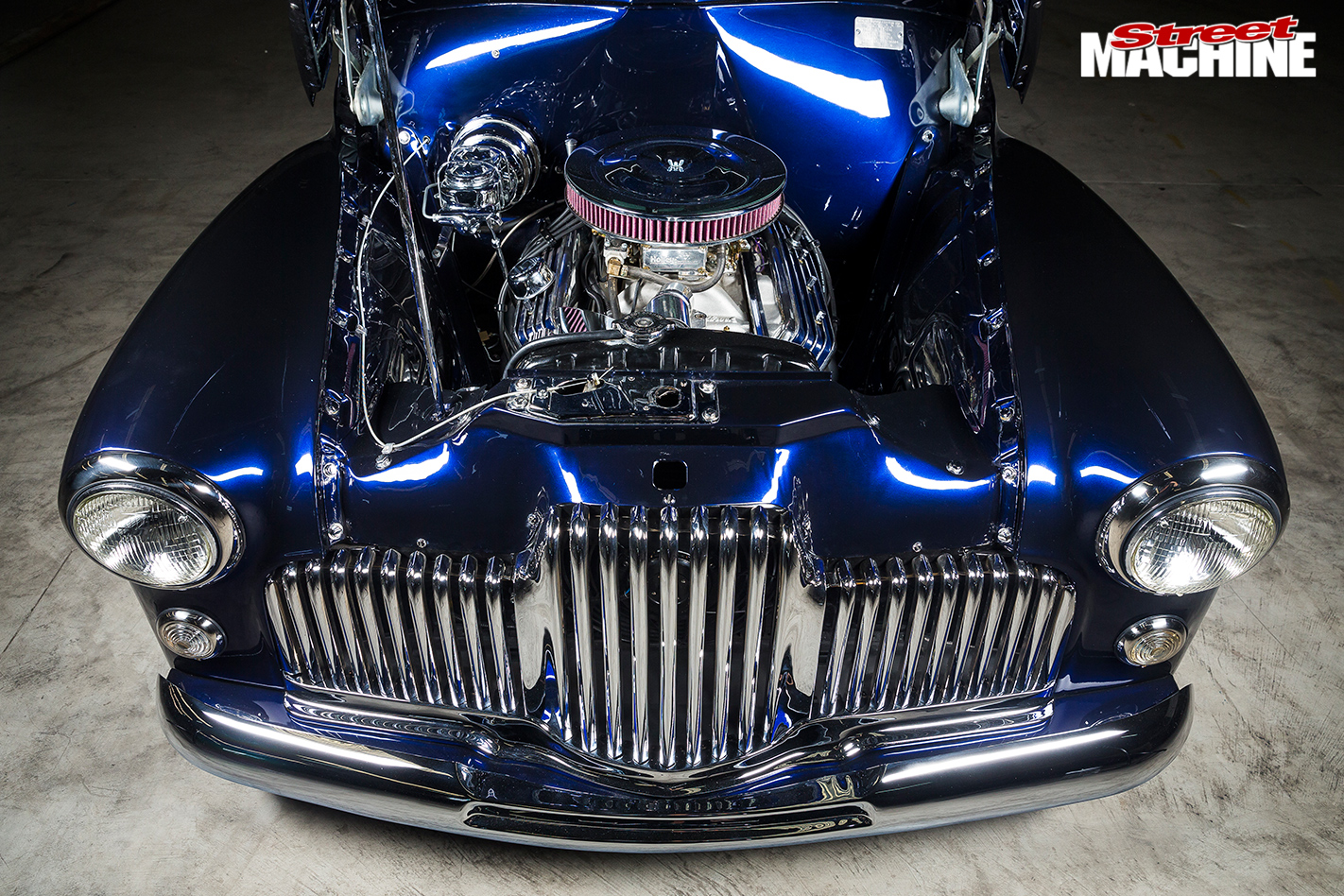 Popping the hood, the attention to detail on this build is clear. The power steering pump is tucked down low, and the donk is finished off with shiny trimmings

Yet it’s under the hood where the party really starts. The straight-six was hoicked out, the firewall recessed and trans tunnel raised to make way for a trusty and stout 350ci Chev Vortec cratey. At 330hp off the pallet, they reckoned it was enough juice to keep Les happy. A tough and reliable Coan T400 sits behind, with a nine-inch packing an LSD and 3.5:1 gears up the back. 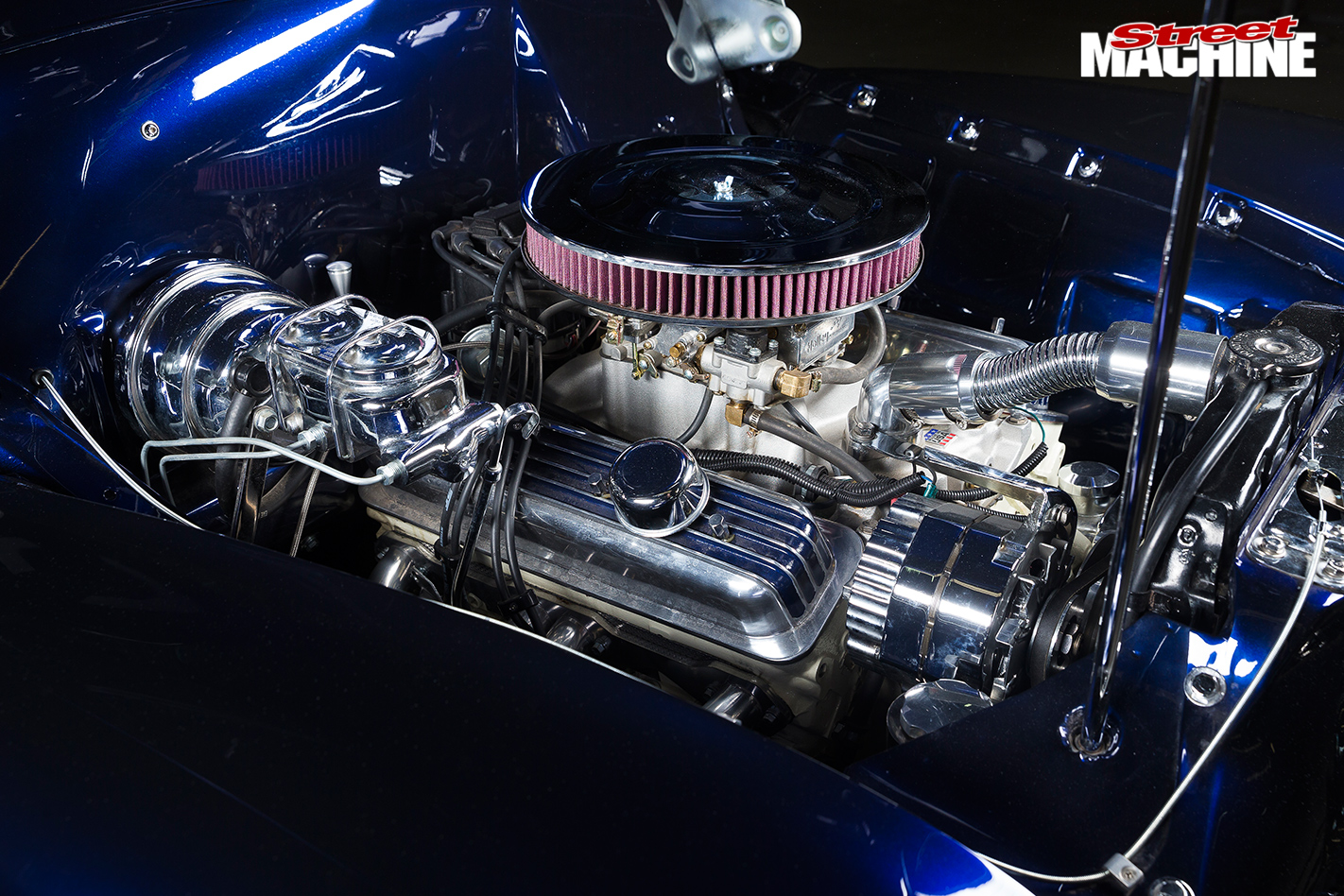 The engine bay has a show-quality feel thanks to tidy wiring, chrome fender bolts and a super-clean finish

To balance out the extra power, a CRS chassis-strengthening kit was added for rigidity, and for driveability a Rod-Tech independent front end with rack-and-pinion and power steer was mated under the nose, along with XF Ford 11-inch discs and VS Commodore calipers. Rears are Ford discs and grabbers. 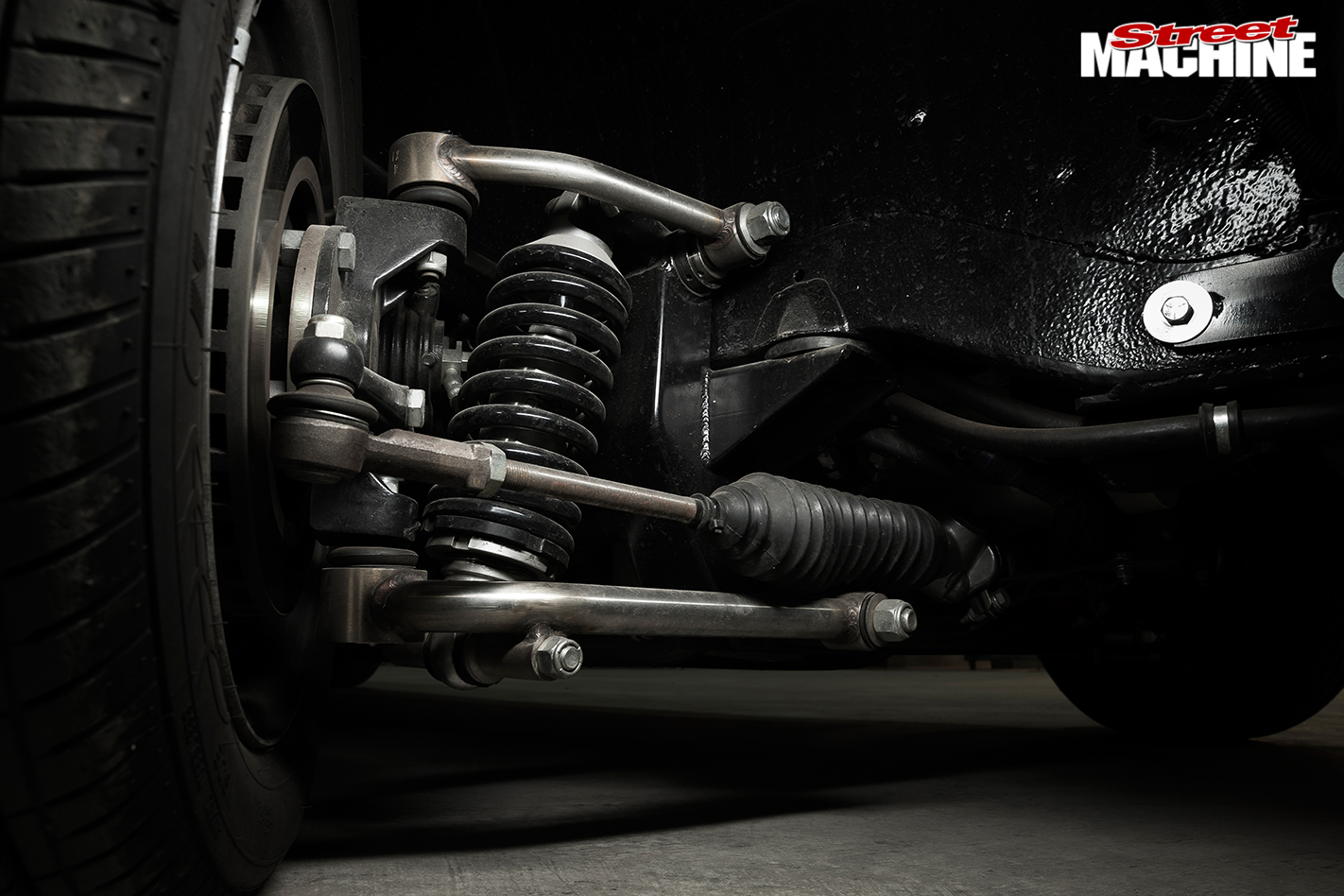 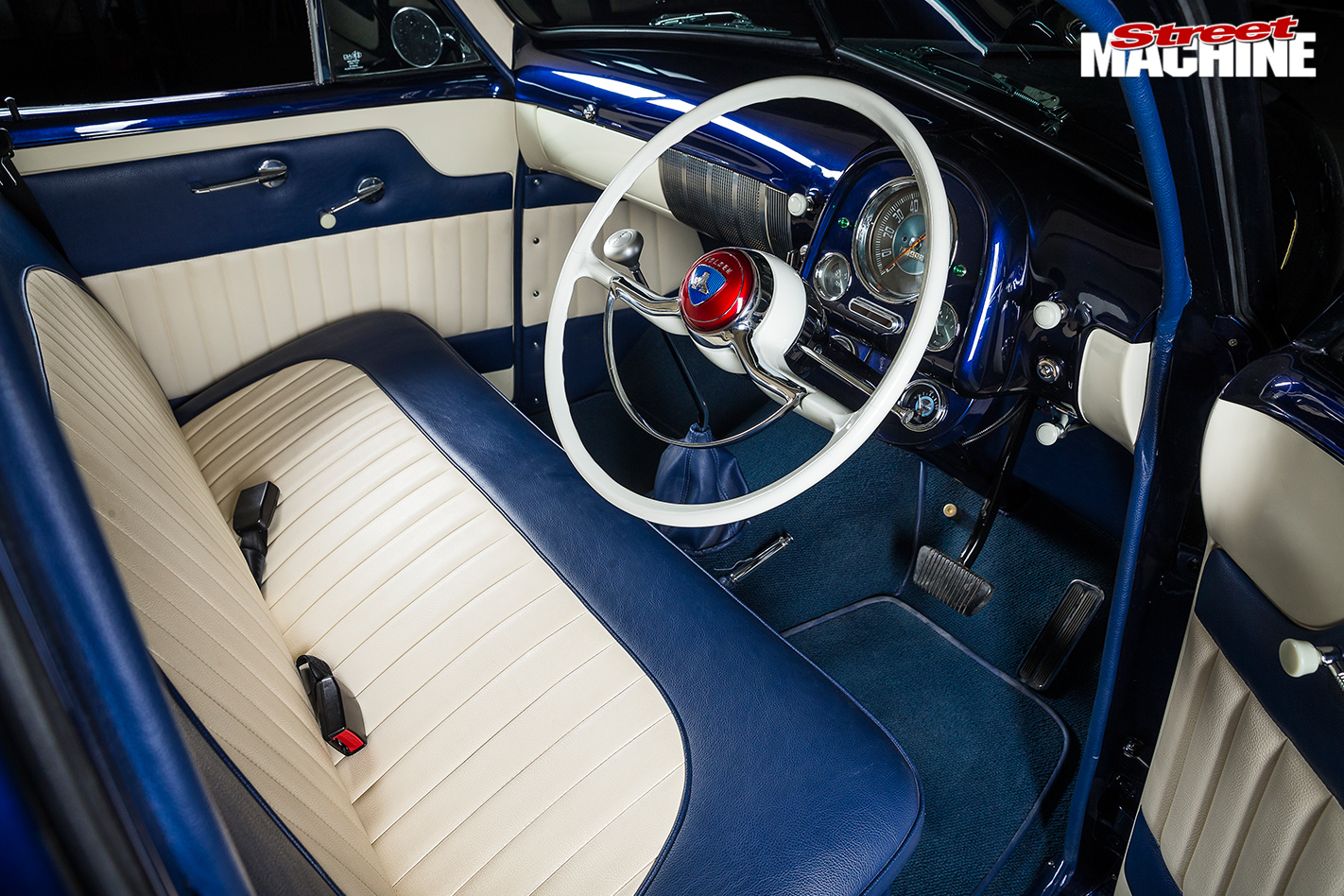 Gotta love a bench seat! The striking metallic blue exterior hue continues through to the dash inside, and the FC tiller and white knobs tastefully complement the tuck-and-roll

The interior is simple but classy, thanks to Pete Bray at Light Pass Motor Trimming. He’s trimmed the pews in blue with a white tuck-and-roll insert, which is carried through to the door trims. The Lokar shifter looks period-correct, as does the modified dash. A white FC Holden wheel completes the look. 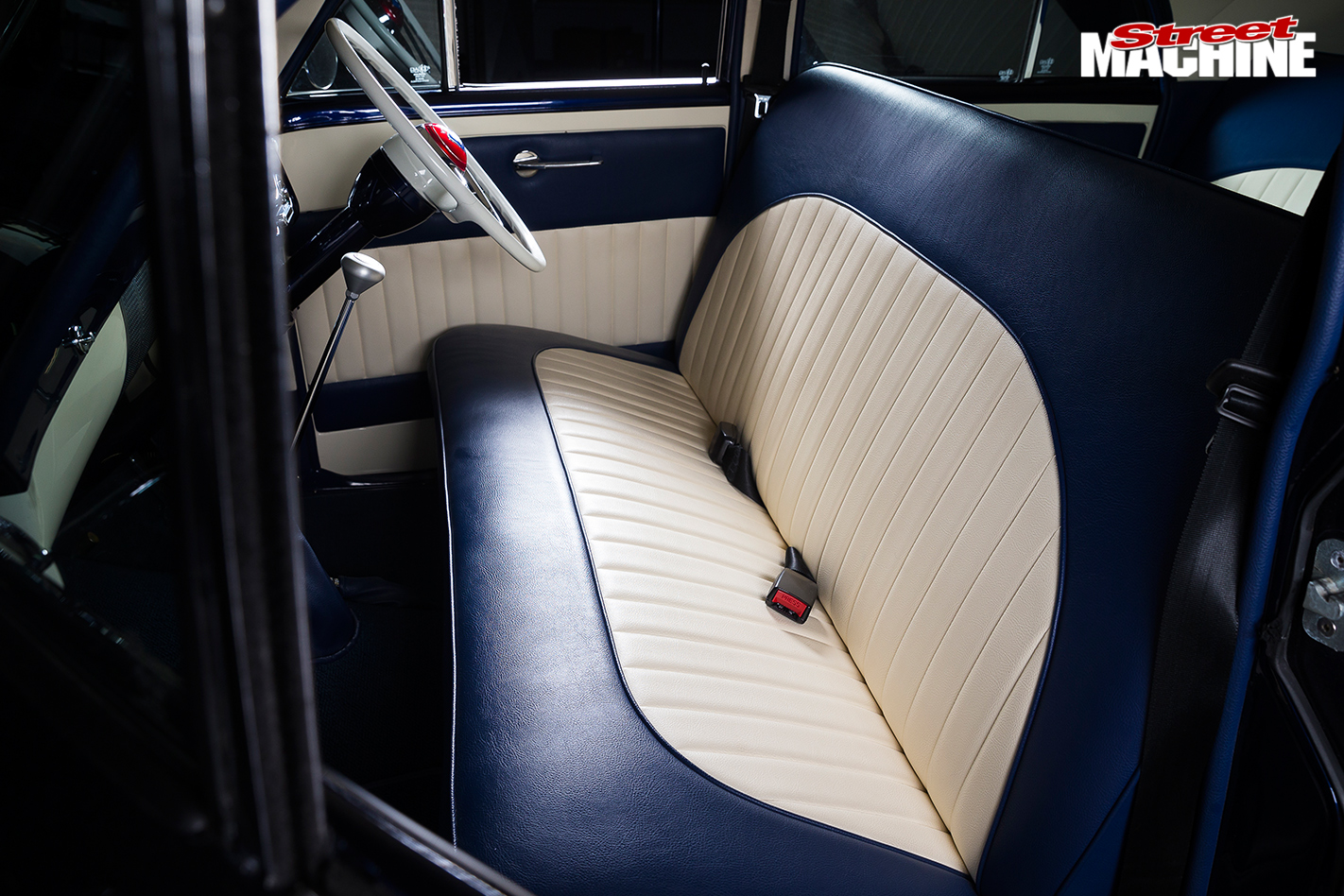 The blokes at Auto Transformers have done a stellar job, and I’m sure they already realise it; still, it’s cool to get accolades from others, such as taking home Best Paint, Best Trim and Top Street Machine Elite on the FX’s debut at the 2015 Extreme Auto Expo. 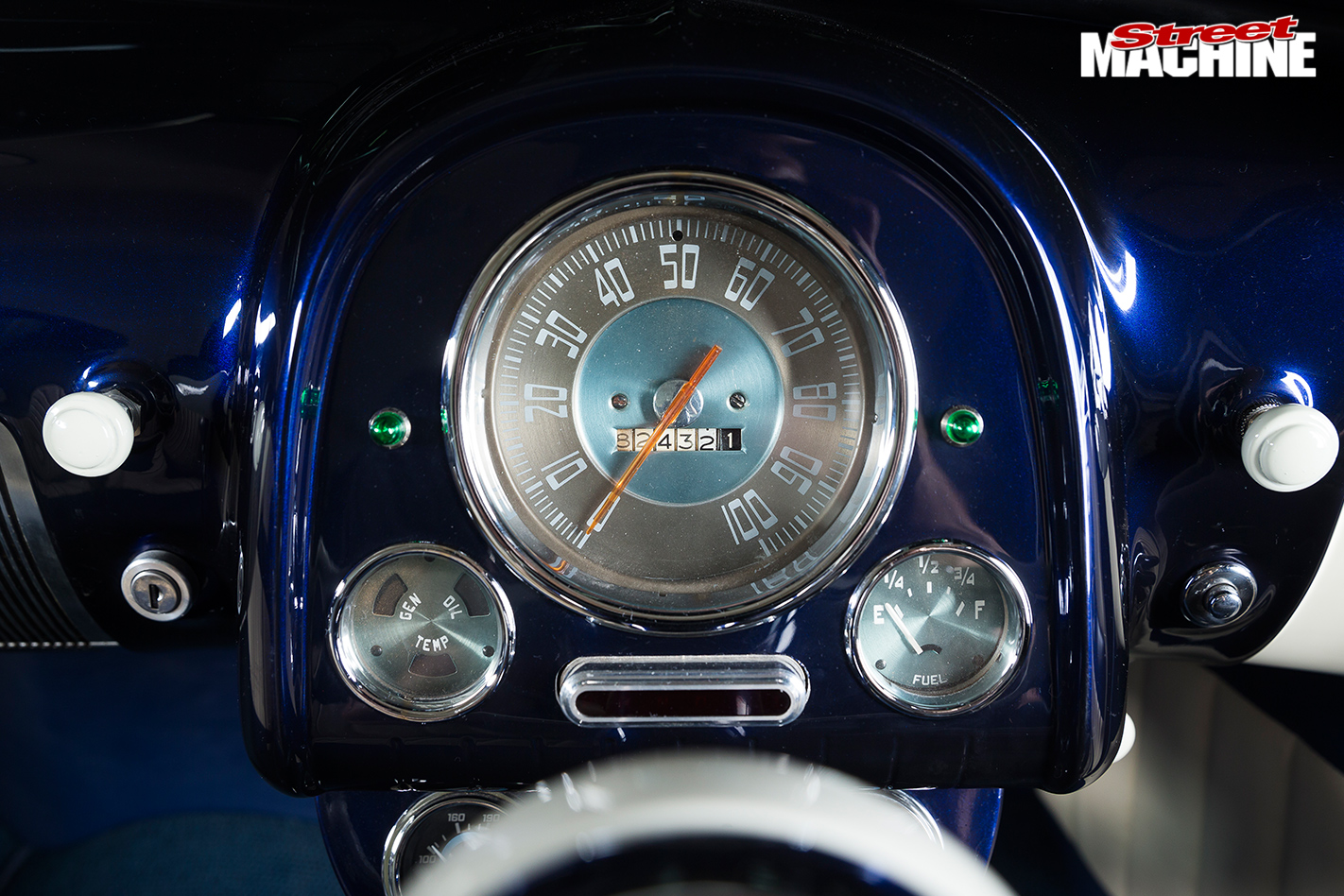 Indicator lights are small LED units, with the standard speedo and a couple of extra Stewart Warner gauges

And that’s not all, folks! It also has full rego, passing all the relevant torsion and rigidity, brake and lane-change testing required. That was pretty much a walk in the park for the Auto Transformers crew, who regularly get cars set up for rego inspection. “It was a fairly straightforward build,” Andrew confirms. “No real problems at all. 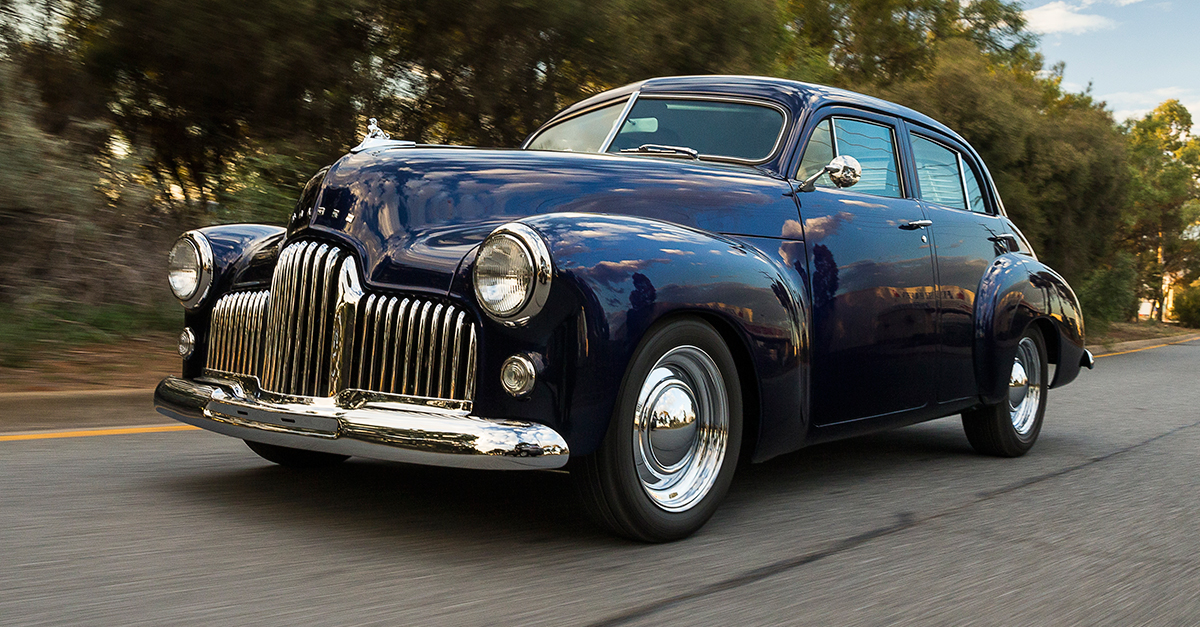 “Les first saw it complete a few weeks after the Extreme debut,” Andrew continues. “He is chuffed! We have a few things to finish off, then it’s off to his home in the Kimberley where he’ll drive the wheels off of it.” 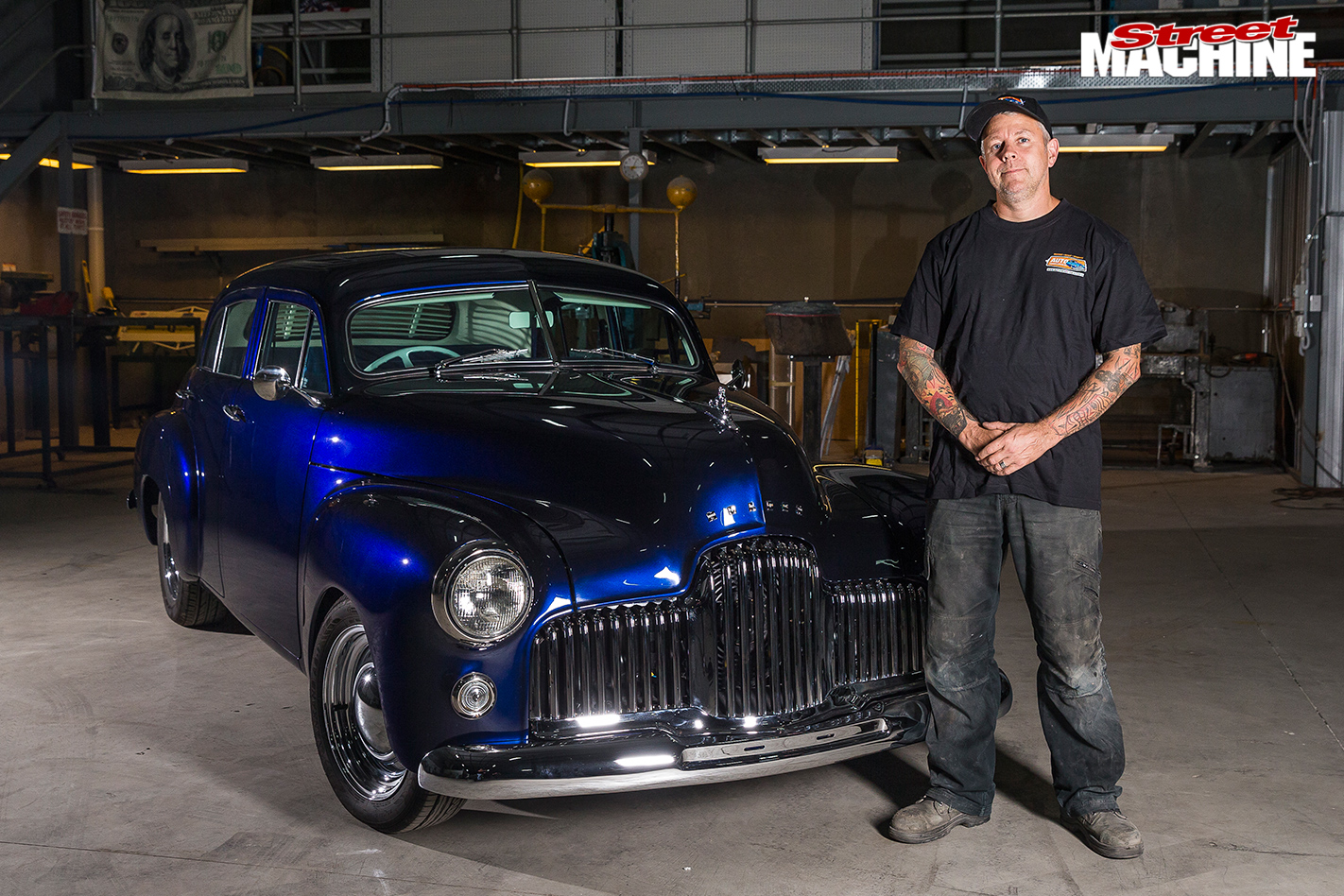 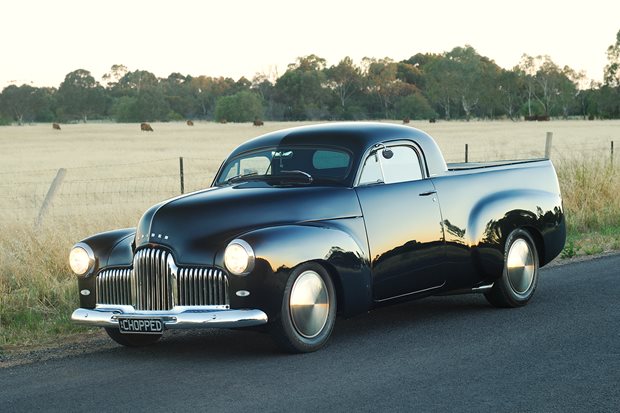 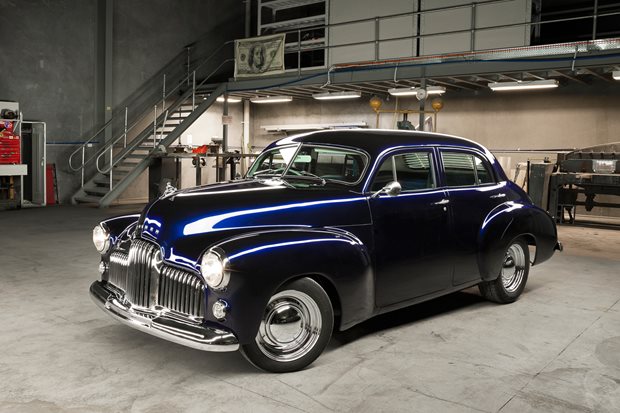 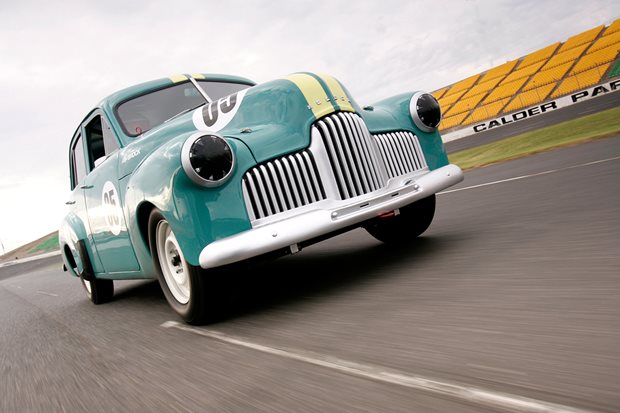